Let me tell you a story!

#1
A very long time ago 1958? a flyer in the UK broke the UK RC endurance record with a flight of about 15 hours using a glow 2 stroke but with a some petrol (gas) in the fuel to improve the fuel economy. In those days in the UK there was a model plane weight limit of 10 lbs.
My day was a serious model engineer with more than a passing interest in aircraft engines of all sizes having been involved with tethered 15 cc hydro plane racing.
My Dad mused that using a glow 2 stroke for endurance flying was far from ideal. A petrol (gas) and spark ignition would greatly reduce the specific fuel consumption.
As a 14 year old keen model plane builder I suggested the power of a good 5 cc (030) in an efficient glider type plane should be able handle a 10 lb plane adequately. Of course the problem was at that time there was no 'aircraft' 5 cc four stoke let alone one that used petrol so my Dad set about building one. Not entirely as a result of my suggestion but he had wanted to show to his model engineering peers that small complex IC engines were possible and 5 cc was sufficiently small.
The engine was primarily a 'demonstrator' rather than a serious attempt at the world endurance record but nevertheless was built with that purpose in mind.
Based on full size practise it used 45 degree inclined valve in a 'hemi' head with the exhaust valve at the front for cooling using the now common skew drive camshaft across the front of the engine.
Completed in 1962 it was entered into competition at the Model Engineer Exhibition in London. 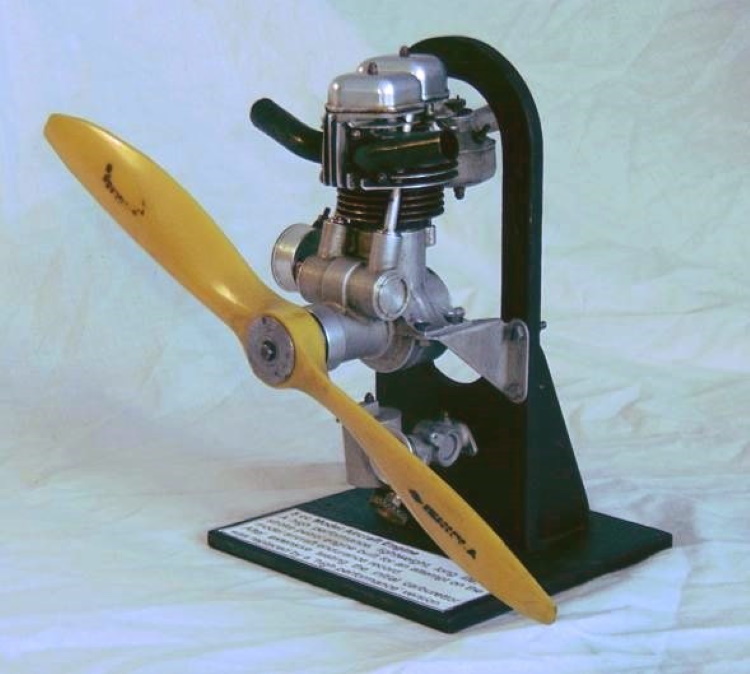 He prepared a full set of working drawings. 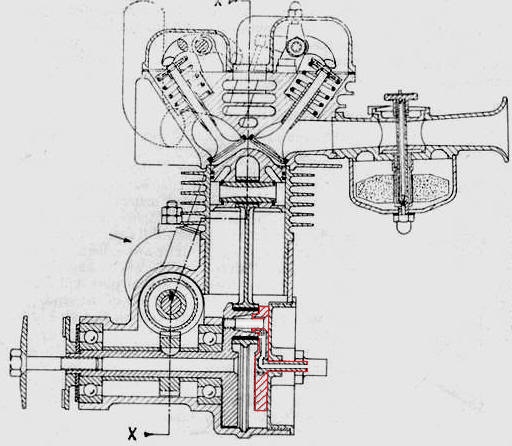 Always a 'working' engine it turned a 9x6 at about 14,000 rpm and over the months accumulated many hours running to ascertain its likely fuel consumption.
Apart from light weight construction its most innovative feature was its dry sump lubrication system. One way valves in the back plate kept the crankcase below atmospheric pressure so oil was drawn in from the oil tank via a rotating 'banjo' to deliver oil directly to the big end from where is would 'spray around' lubricating the main and cam shaft ball bearings eventually returning with the exiting air back to the oil tank. This meant the engine ran on pure pump petrol with no oil dilution further improving the fuel consumption over the current method of adding the lubricating oil to the fuel.
With a proper float carburettor the part load fuel consumption was almost in direct proportion to the power. Fuel consumption tests indicated it would be able to fly a plane for almost 24 hours with 4 lbs of fuel. A realistic load for a 10 lb plane.
The problem of using spark ignition (no transistor ignition back then ) meant it was never actually flown and in any case the endurance record and the 10 lb plane limit were soon abandoned.
After 50 years I did consider putting it in a modern RC plane using a miniature 3V coil but it is unique and well beyond my engineering skills to ever repair so it has stayed grounded although I did run it a few years back just to prove that it still did.
There is a video of that run here.
Incidentally that was also its original 65 year old test stand!
Last edited: Jul 13, 2020

#2
Wow.. wonder why he never put this to market. Was a patent procured for the tech back in the day? With the electronics today for ignition this could be a viable replacement for two stock nitros with out the inconvenience of specialty or mixed fuels.

#3
PsyBorg
As everything was machined from solid it took hundreds of hours to build and so like many home made engineering models it would be prohibitive to mass produce.
It did however encourage others to tackle even more complex subjects. A friend of his built a beautiful working 1/5 scale RR Merlin. It only took him 6000 hrs!
You must log in or register to reply here.
Share: Facebook Twitter Google+ Reddit Pinterest Tumblr WhatsApp Email Link
Menu
Log in
Register