#1
Got my first few controlled flights out of my Versa wing last weekend! Sadly, I have no pics or video because it was just me.

Wing launching it is still quite challenging for me but after about 20 tries (not exaggerating) I got the dang thing in the air! I slapped my hand back on the controls and got it level and gaining altitude just as it's belly was grazing the tops of the 2' grass.

I took the advice of many mentors on this forum and just watched how the plane wanted to fly, instead of telling it how I wanted it to fly. Turns out the plane knew best and all I had to do was trim her up and let her soar.

After 6 more flights this weekend I am proud to say my Versa is still in one peice. Next weekend I'll be taking it and my calypso glider to my wife's uncle's farm. He gets a huge kick out of how a super cub flies so I think he'll love seeing the Versa's capabilities. I'll be sure to post the best pics of that "event."

My next project is taking apart, painting, and upgrading my two super Cubs. The nice thing about having two is that I can mess up on one and make the next one better lol. I'm not sure whether I'll flatten the wing like David did in his time lapse but more time with the Versa is sure to build my aerobatic confidence so, maybe...

Thank all of you for the expert advice on here so far. Turning your body torward the direction of flight when flying towards you has saved my butt more than once thanks to @Hai-Lee 's advice in a different post.

Thank you all again for the constant information and inspiration!
D

#2
How are you launching it? Assuming you fly mode 2 (pitch and roll on the right stick), you can use the Bixler launch method. I've been doing it since I saw him do it in the early videos. To summarize; hold the radio in your right hand so you have elevator and aileron control at all times, hold the plane in your left hand by the right wingtip, throttle up with your mouth, then give it a toss.

You can sort of see him do it in the Versa Wing video. Right after Josh launches, you can see Chad do it the opposite way. He has no control of his plane until he gets his right hand back to the stick. Compare his launch to Josh's.

#3
Funny enough, I've seen him do that but I'm so uncoordinated with my left arm I didn't even think to try that until today at work. I'll give it a go. It can't be any more awkward that what I've been doing lol.

#4
The safest way I have ever found to launch my flying wing is to use a foot pedal operated bungee launcher. it NEVER fails to launch the plane straight and level though it is embarrassing if you launch without a battery or with your transmitter switched off.

You can find a simple setup for a treadle to release the bungee here; https://forum.flitetest.com/index.php?threads/the-best-20-i-invested.53587/

Launching with both hands on the sticks. Always a straight launch with adequate flying speed. Can even do good crosswind and downwind launches. No more relying upon the ability of your arm or that of a friend to TRY to get it airborne. Stomp on the release and the model will fly even without you!

#5
dayve said:
How are you launching it?
Click to expand...
Here is a video showing 3 ways to launch a wing.
I use a frisbee toss, (forearm toss), Give enough throttle to pull the plane from your hand (25-50%), I find it better to hold the Tx in my left hand, thumb off the throttle. Give a firm toss with the right hand. Then move your hand the the stick. I grip the plane in the middle 1/3rd, right of center. Be carful to NOT induce a yaw.

I would not recommend having your thumb on a stick while you toss, too easy to make an unwanted input.
Last edited: Dec 11, 2018

#6
I typically throw with my right arm straight out and my left on the throttle.
Like so:

I'll try launching it left handed so I have elevon control next time. Right now I'm fortunate that the tall grass absorbs most of a rough launch.

I've dabbled in disc golf a little so this method felt more natural to me cuz I'm a righty. I can't help but think I'll have more success with my left though. And I will be checking on some kind of bungee launcher system I think. Until I have planes with proper landing gear... thanks for the advice fellas!

#7
You can get the good bungy rubber cord from Hobby King for a reasonable price!

#8
I like to launch almost vertically, seems to work every time. Throttle up to 50-75%, toss it into the wind and it should be fine.

#9
I thought I'd catch you guys up on what I've been doing over the past month. I decommissioned my second Versa after I snapped my motor mount, it would have been an easy fix but the nose was getting squishy and I wanted to build a lighter version anyway.

For the rest of the holidays all I had was my calypso glider to put on some shows. When you increase the throws on that thing it's surprisingly agile! I've only been flying my glider since my last post but that is about to change. 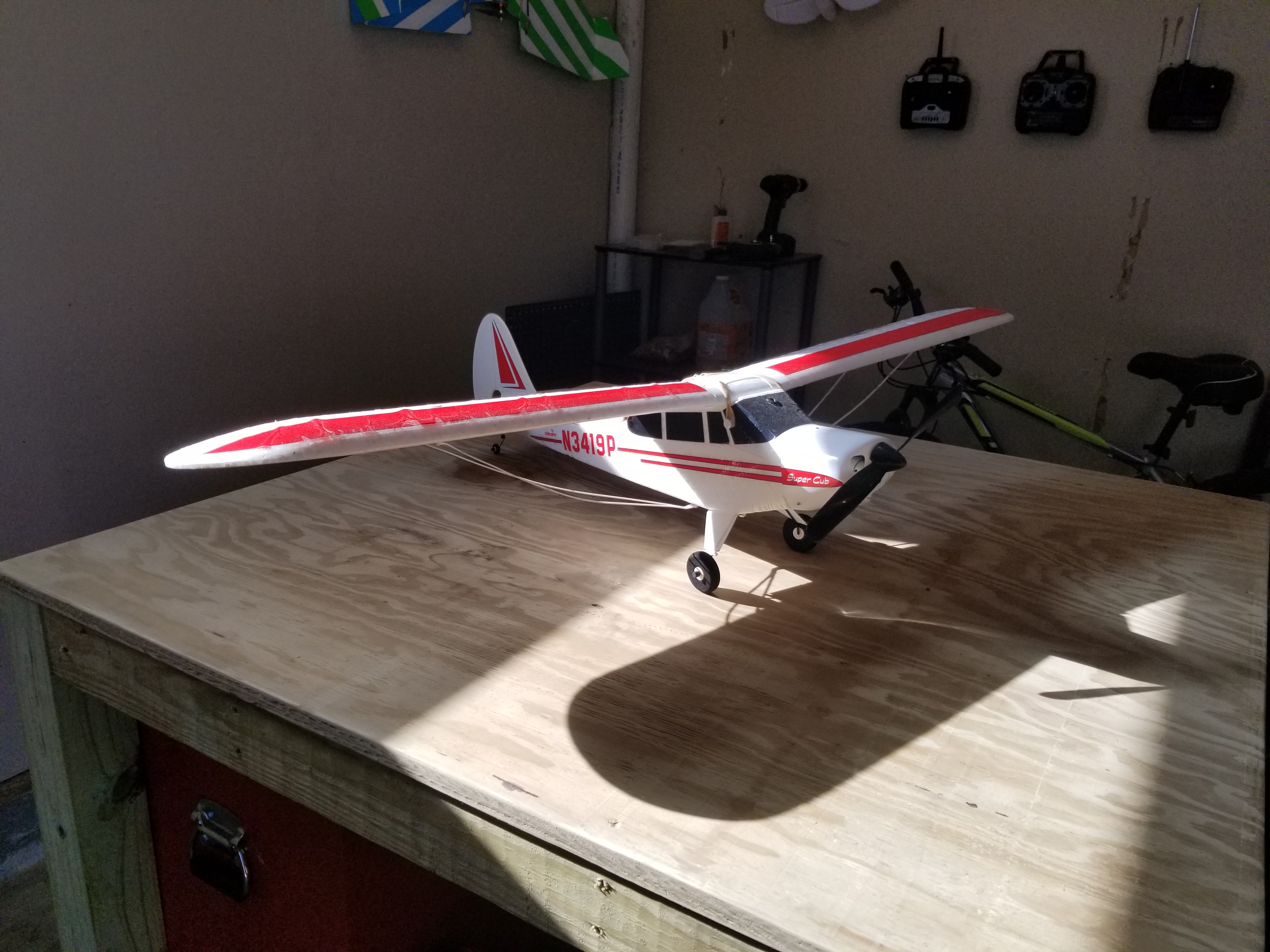 I promptly disassembled it 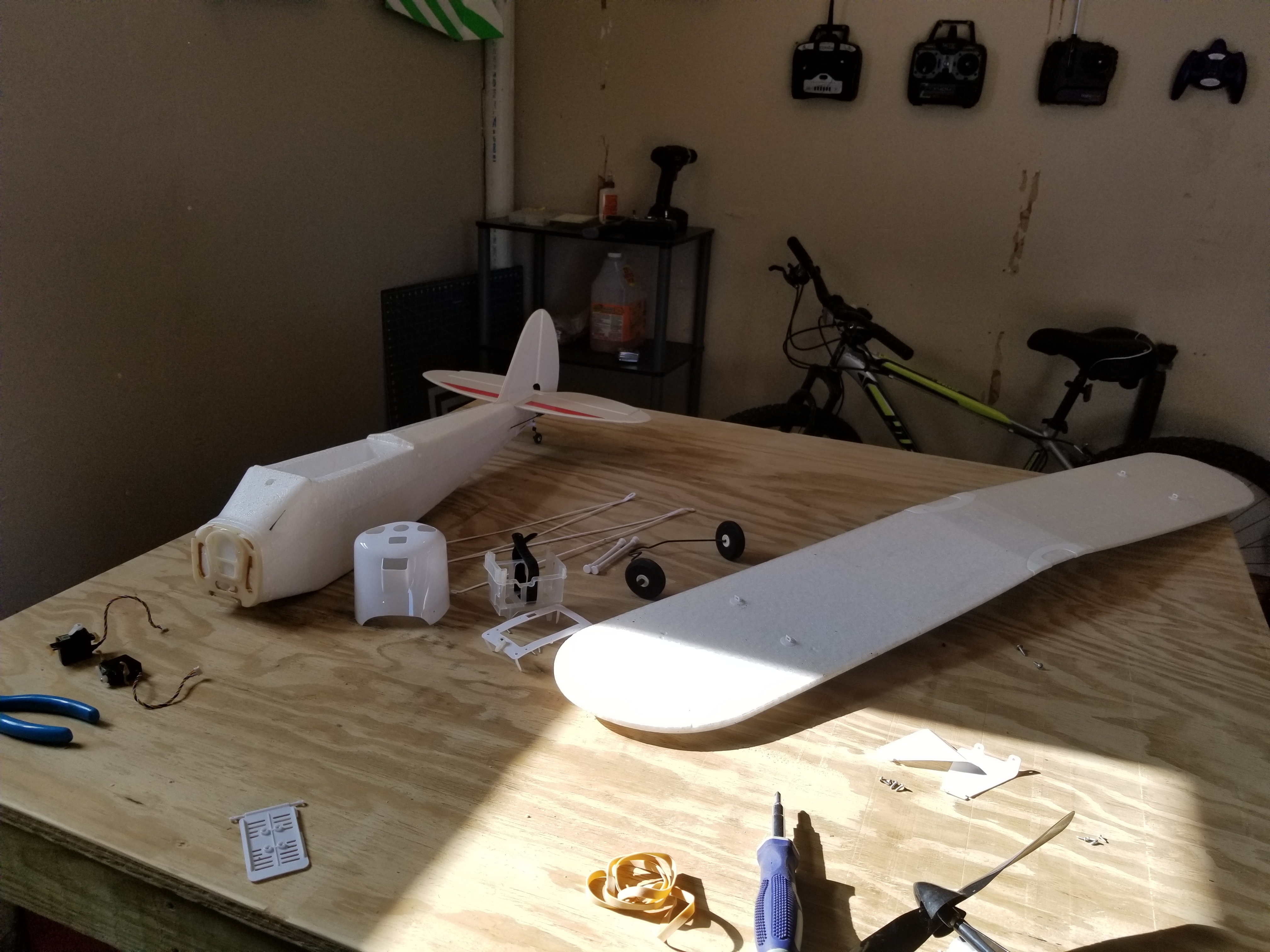 And I got to painting 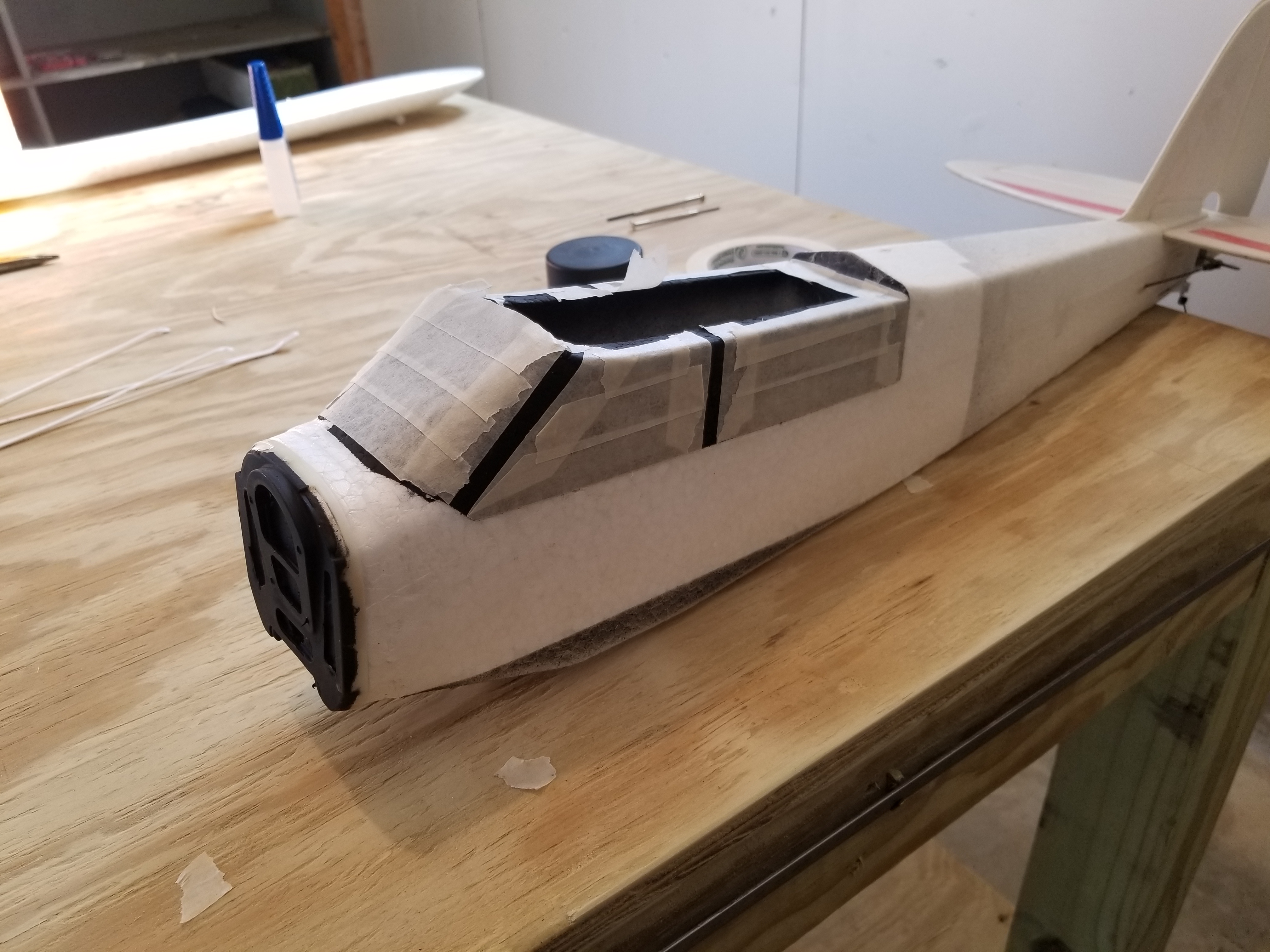 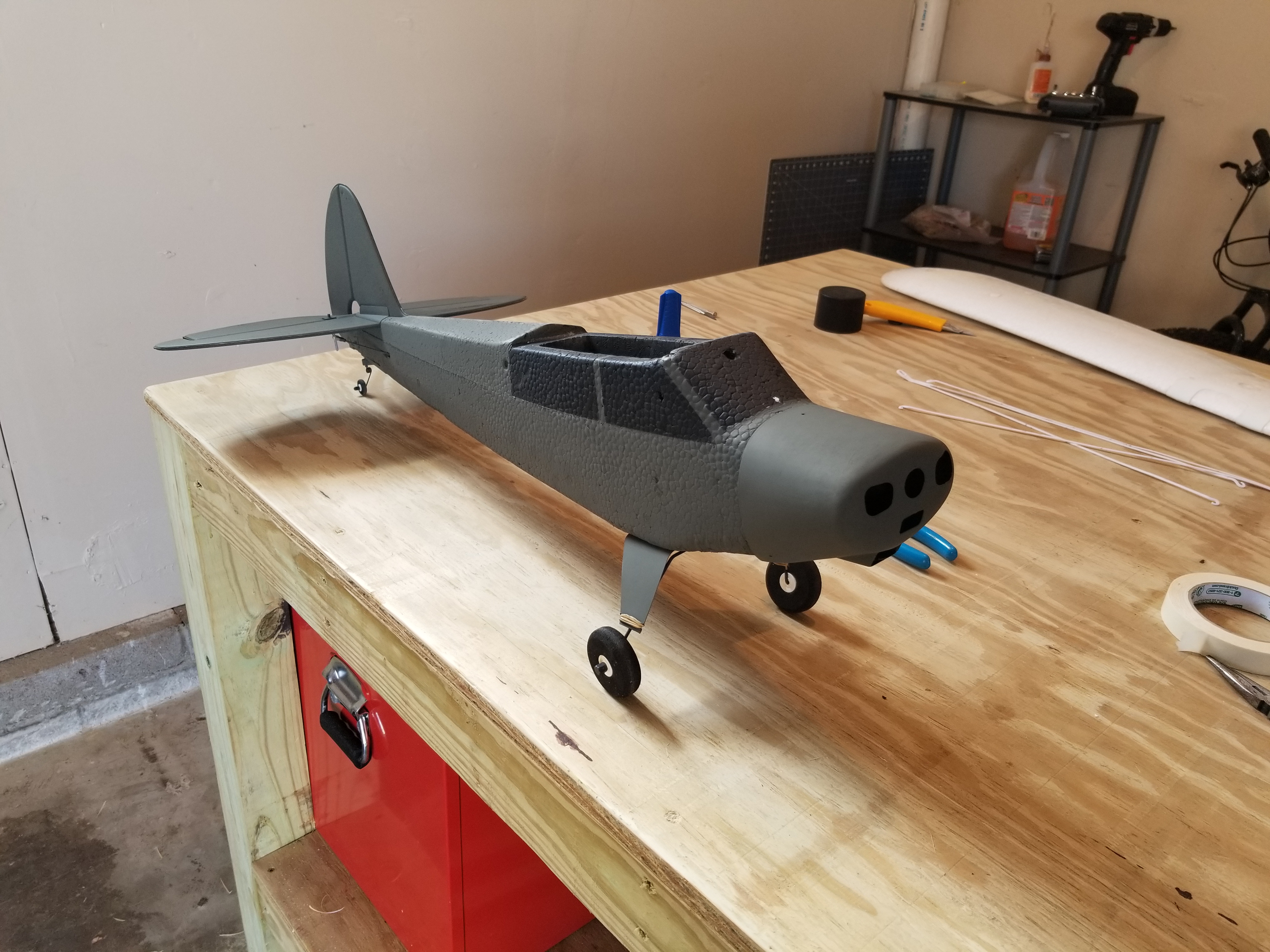 I then inserted a spruce spar for rigidity and a couple servos for some aileron action. 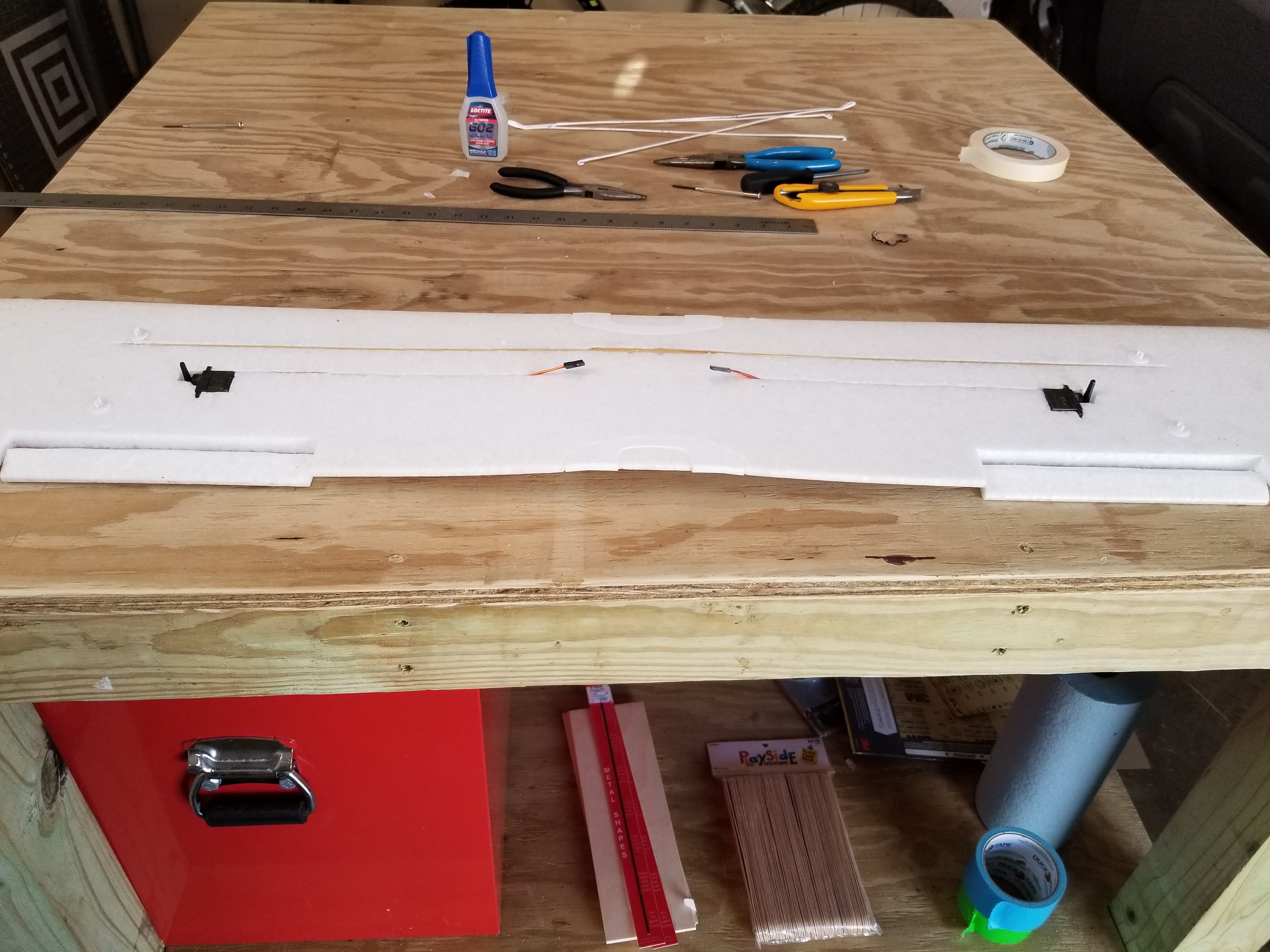 Then painted the wing. 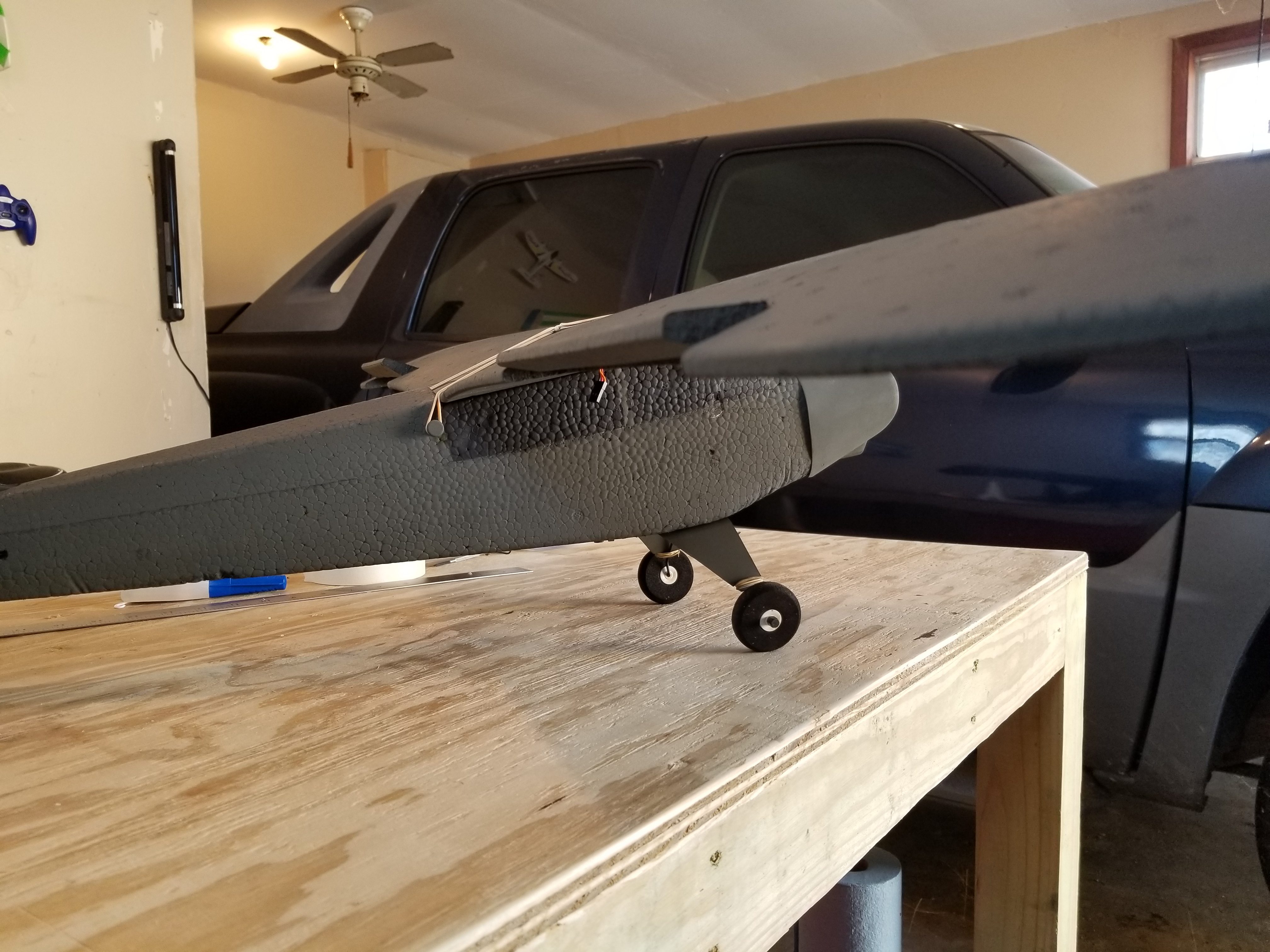 When I was done with this I ordered the electronics and started on my other project, laying out the plans for my FT Edge. For those wondering, this is how much space the plans take up all laid out. 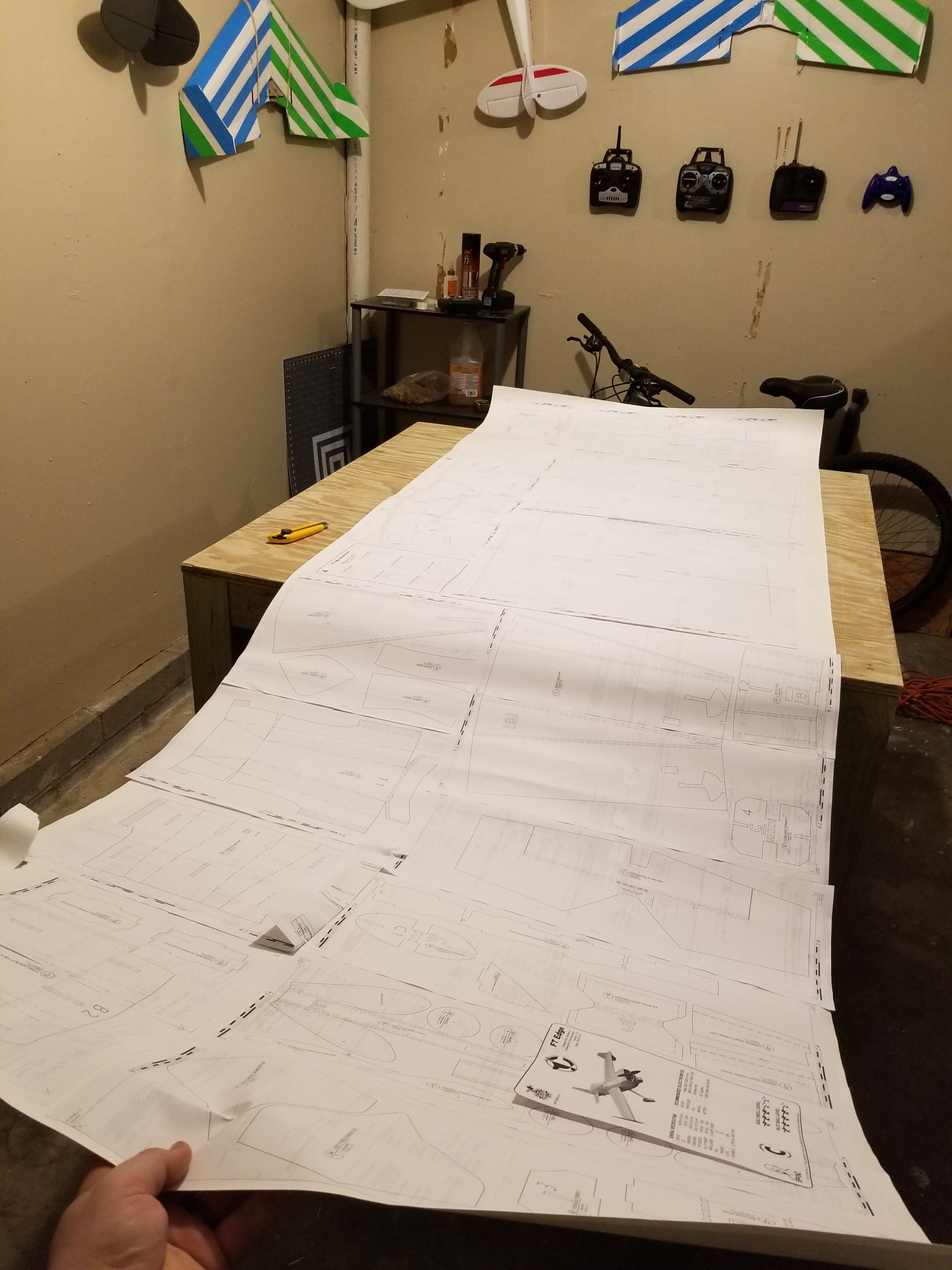 Then cutting them all out with a box knife and exacto took about 2.5 hours. And I ended up with these. 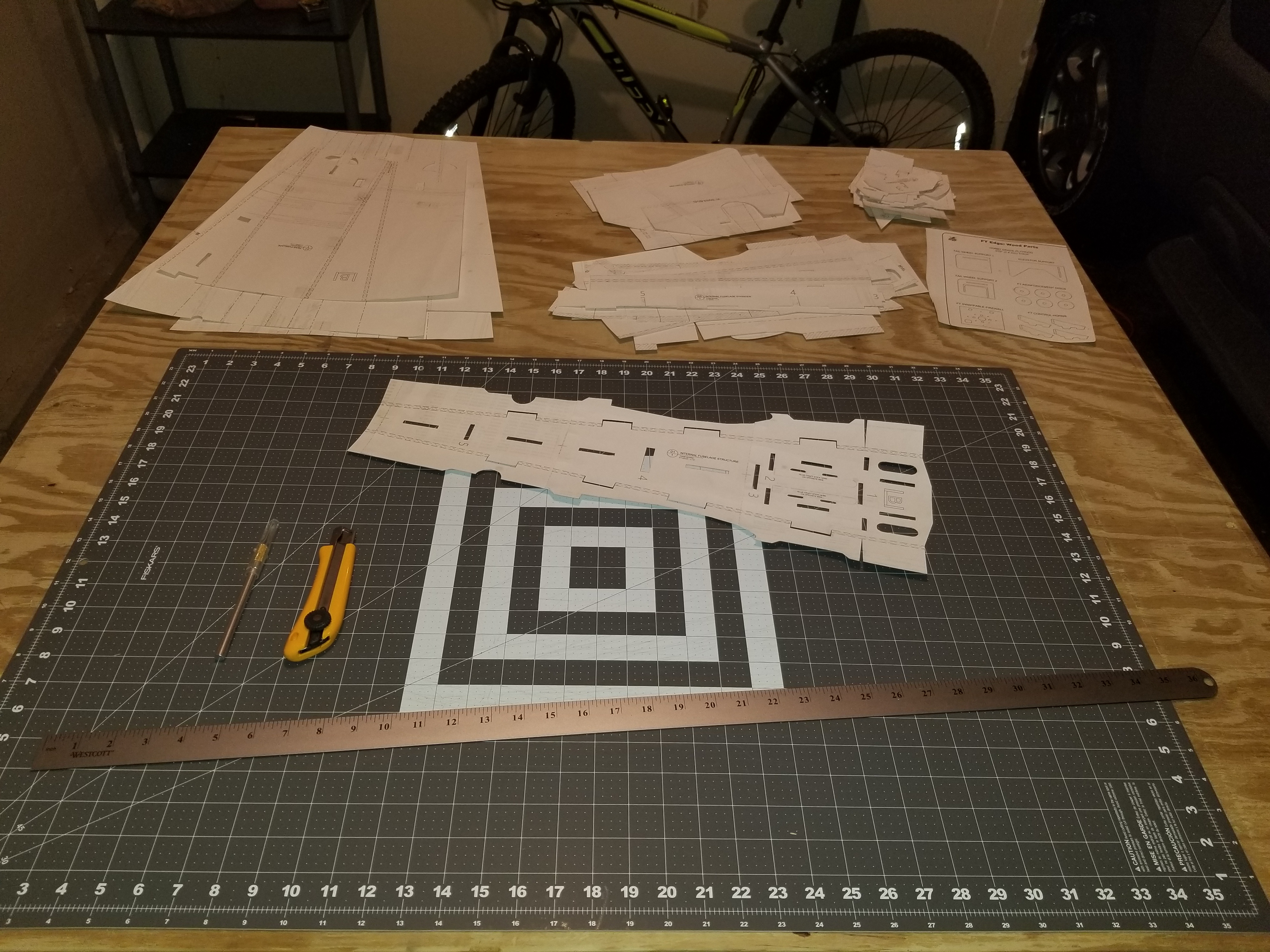 I glued the plans to some thick construction paper as seen in the first picture to maximize reusability because I'm lazy and didn't want to tape together and cut out the plans ever again... lol

After this my electronics and motor mounts came in, here's what I got:

So far I've been impressed by the lemon reciever I had in my Versa so I thought I'd get a 5 pack just encase the where a few "lemons." I slapped all of that on the cub and boy was I excited!

Running the turnigy on a 1300 3s doesn't leave anything to be desired. That test blew everything off our fridge lol. And when I slapped the wing on and held it vertical at full throttle it was trying to pull itself up with surprising force.

So that's where I'm at, I think I'll spend this next week cutting out foam for the edge and carting the cub around showing people the insane thrust and simple technology. Then I think I will maiden it at the guy who sold it to me's house. I've been keeping him updated and he wants to see his old plane fly with 3 times the power and new ailerons.

Next I think I need to start a YouTube channel so I can start posting my maidens and subsequent crashes. Thank you for reading and have a great day!
S

#10
Alexander Carter said:
Funny enough, I've seen him do that but I'm so uncoordinated with my left arm I didn't even think to try that until today at work. I'll give it a go. It can't be any more awkward that what I've been doing lol.
Click to expand...
Way to go!! I haven't had a whole lot of luck hand launching MY two delta wings, as I'm handicapped and try to fly while in my motorized wheelchair.

Your progress with the cub looks great. I built and have flown my FT Bushwacker and love it!