Polikarpov I-15 (Compatible with FT PowerPod!)

#1
Hello guys. I would like to show you the first plane that I've designed. It took me quite a few months (almost a year) since I've had a lot of problems (bassically exams, but I also lost all the data of my Pc, including the plans of the plane, when it was almost finished).
The plane, as the title of the post says, it's the Polikarpov I-15. It has 1m (40 inches) of wingspan and it's compatible with the FT PowerPack C. At first I wanted to build the I-16, but then I decided to make the I-15, which has the same fuselage but it's a biplane. Here's a few photos of the plane:

And a photo of the 3D Model of the RC version (the wingtips will be roundy in the real version):

I love the shape of the upper wing (the way it connects to the fuselage), but it was really hard to make that shape in a foamboard plane, specially when it's your first time designing the plans.

I haven't built it yet since I don't have enough foamboard and the only type of foam I can buy is way heavier than the FliteTest one (I'll probably end up buying the FliteTest foamboard). I'll add the building of the plane in this post as soon as possible, but first I need to buy the foam. Meanwhile, I'll put here the plans and the techniques I used, in case someone is interested.
I started building the plans in 2D, in AutoCAD, but then I thought that it was easier to make a 3D version of the plane (in Fusion 360) and that's what I did. I used this plans that I found on the internet to make the formers of the fuselage:

I removed some formers that weren't necessary, and then I placed them correctly. Secondly, I made a "PowerPod Box" that connects all the formers and the PowerPod:

I also made the holes for the battery.
The last former is so thin the PowerPod Box can't go through it, so I connected it to the other former with 2 pieces of foam (vertical and horizontal).

One of the advantages of making it in 3D was that I could see the exact shape of the posterboard/foamboard that I was going to use to cover the fuselage, by using "ExactFlat". The problem is that it took me so long to make the plans that the free trial expired :S. Anyways, I will do it like other people do, by covering it with paper and cutting the excess. Then I'll unfold it and cut a piece of posterboard with the same shape.
So, the next step was making the wings. The upper wings were hard to make:

They're connected to each other, the PowerPod Box and the Formers. I think there won't be any problems with it. This is how the wings will look in the foamboard:

You can see on the left part of the wing the different cuts that are needed in order to make that "V" shape.

I'll build it soon, and I hope it flies good. I don't think it will be too heavy, specially if I use a light foam, but since it's a biplane, it's going to be heavier than a monoplane.

#4
I've ordered the foamboard. It should arrive in a few weeks. In the meanwhile, I'm going to make some adjustments in the model, specially in the nose. Also, I think I should write about the plane after it's finished (and in the "Builder's Corner section of the Forum), so I'll delete this thread and make another one after the plane is built.

Edit: Okay, it turns out that I can't delete my own threads, so I guess I'll post the finished build and everything here.
Last edited: Jul 26, 2019

#6
I've got some news. The foamboards have arrived, so I can start with the build! I also printed the plans. Tomorrow morning I'll start cuting the pieces and probably building it:

Also, while the foamboard was being sent, I redesigned the nose section. Now it's more realistic, aerodynamic and it has more space for the battery (and the battery placement is easier):

#7
Ooooh I'll definately try building this. I love the I-15.

#8
Enos Shenk said:
Ooooh I'll definately try building this. I love the I-15.
Click to expand...
Cool! I'll love to see your build. But don't build it yet, the plans aren't finished and I also need to see how it flies (and probably modify a few things like the ailerons or the tail).

#9
The plane is almost finished! I just have to cover the fuselage and install the wheels. It was easier to build than I thought, except for the motor cowl.

I'll change a few things for the final version (wings and tail).

Mentor
#10
Looking great! Love seeing this design come to life in foam board!

Anyways, the plane is looking great!

#13
synjin said:
How is it looking now?
Click to expand...
I don't have much time now that I started University (I'm also studying for the driving licence :S). But I installed one of the 2 wheels (they are separated from each other). While I was bending the metal bar/rod of the second wheel it broke, so now I need to buy more. Maybe this weekend I'll have time to finish the landing gear. After that I will just have to finish the covering!

I love the way you let the air from the propeller go around the fuselage/cowling.
Everytime I see a scale model of a radial engine, I am worried about the round bulky nose. Can help but think a lot of power is lost by blocking 60% of the prop area right at the front of the plane...

I love the way you let the air from the propeller go around the fuselage/cowling.
Everytime I see a scale model of a radial engine, I am worried about the round bulky nose. Can help but think a lot of power is lost by blocking 60% of the prop area right at the front of the plane...
Click to expand...
Thank you! Most of the radial engine airplanes have that problem, but this one is a bit more aerodynamic although the nose is flat. The real model was roundy, but I couldn't find a way to make that shape with foamboard. I'm happy with the results anyways.

The bottom part is a mess (the battery needed more space than I thought), but I like how it looks, although I'm definitely going to make a version 2. This is gonna fly this week if there's low winds, wish me luck!

Edit: The quarantine started in my country a few days after this message, so I still can't fly it :C.
Last edited: May 26, 2020

#19
Hi, Mario
Congratulations for your "Chato"
I builded a "Mosca" using a Sportster.
Regards. 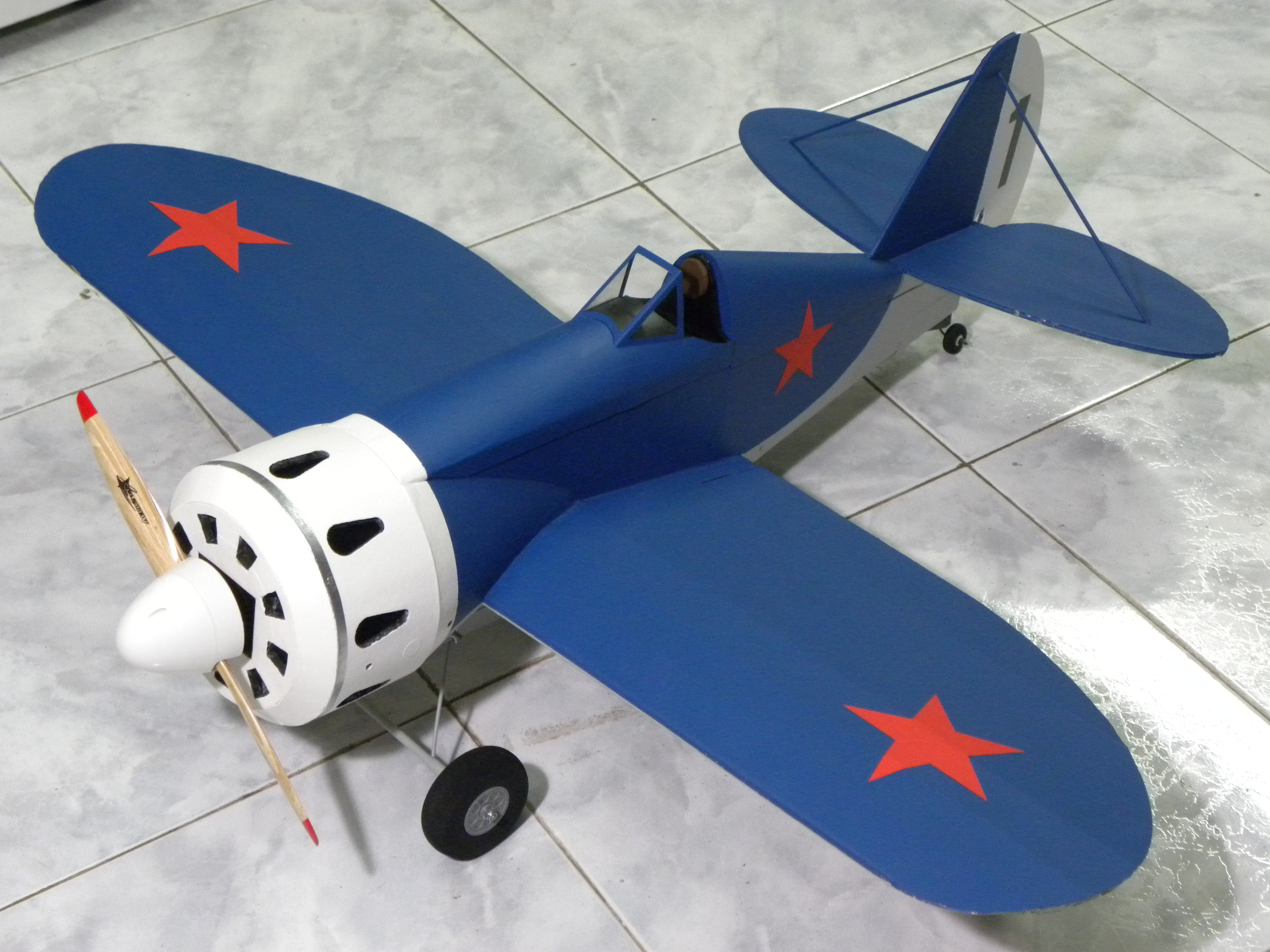