#1
I’ve wanted to build a balsa aircraft for quite some time now and I’ve had experience with building with balsa and foam. However, I’ve never actually built a balsa model. So I set out to look for a suitable aircraft to put a 2S power system in it. I came across the Dr1. A triplane was perfect. The framework and the look of the covering for plane matched how the plane was originally built. So I bought the kit. At first I was intimidated because there was quite a few pieces. However, I was confident. So I got to work on modifying the plans so I could build a suitable plane for Rc conversion. After the modifications were complete, I got to work. It went together quite easily. For me, building the airframe was the easy part. Covering it was a little more difficult. None the less, I shot for perfect and I got what I think to be 85% perfect. There are some wrinkles and it does have a couple patches. I am going to move the aileron servo wires. But as of this moment, I’ll just keep them where they are at. It did come out to be about 1.5 oz heavier than originally anticipated. However, it still has a rather light wing loading so that will work out all of the quirks of the DR1. Overall I am very happy with this build and I have yet to fly it. I didn’t have magnets for a battery hatch, so I made the cockpit as the battery compartment since I didn’t want to put a figure in the plane. Some people like them, I just didn’t feel the need for one. I may or may not put the decals on. I like the way the plane looks because it’s simple. I also added a tail wheel for smoother ground movement. As well as the skid was made from balsa and I knew that wouldn’t last long. As a guesstimate, I have about 60 hours invested into this plane. For my first balsa model, I did pretty well. Now I just have to wait for Mother Nature to be on my side to maiden this bird. The prop that is in front of the aircraft is a color scheme that I may put on the prop. Its just not well balanced and it’s too big to put on the plane. So I went with a prop that was just laying around. I cannot wait for a maiden flight. I did have issues with balancing and it took a lot of weight in the nose plus some cutting down of stuff on the tail. It’s as close as I can get it. So it should fly fine. I much rather have a nose heavy aircraft on the maiden. However, I believe it to be ever so slightly tail heavy or maybe it’s fine. It’s really hard to tell. I will just have to find out when the time comes to fly it.
Also, if there are any suggestions on a better prop, please enlighten me on the matter. I am unsure if the prop I picked is of maximum efficiency. I also went with a smaller prop because I didn’t want to over prop and burn something up.
Specs:
Motor:Bl 180 outrunner 3000kv
Receiver: ultra micro dsm2 6ch reciver w/ AS3X
Servos: 2.3g long throw servos
Prop: 5x2.75
Wing span: 20”
Wing area: 137 sq. in.
Length: 15.5”
Wing loading: 5.26 oz/sq. ft.
Flying Weight: 5oz
Batt: 280mah 2s 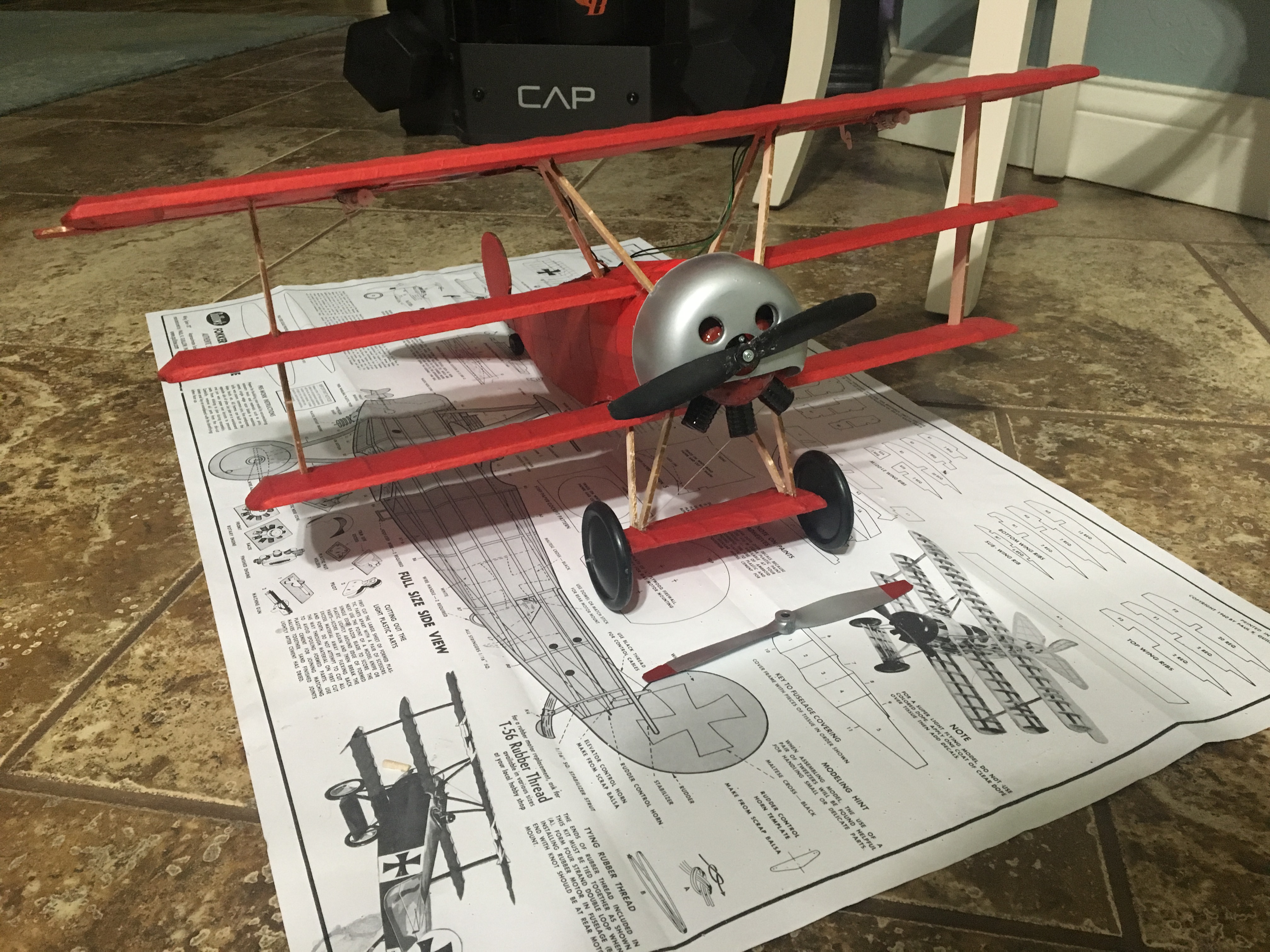 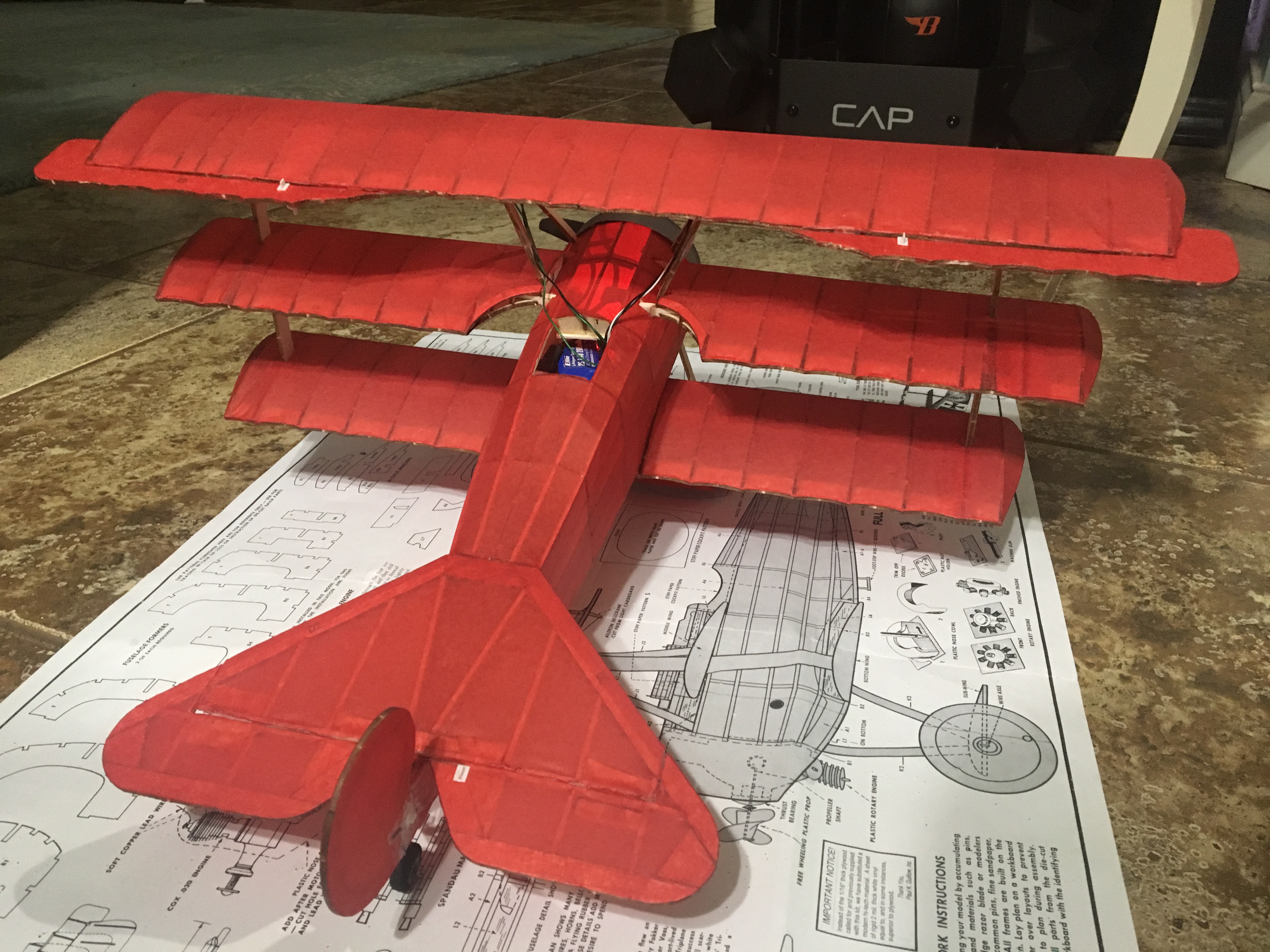 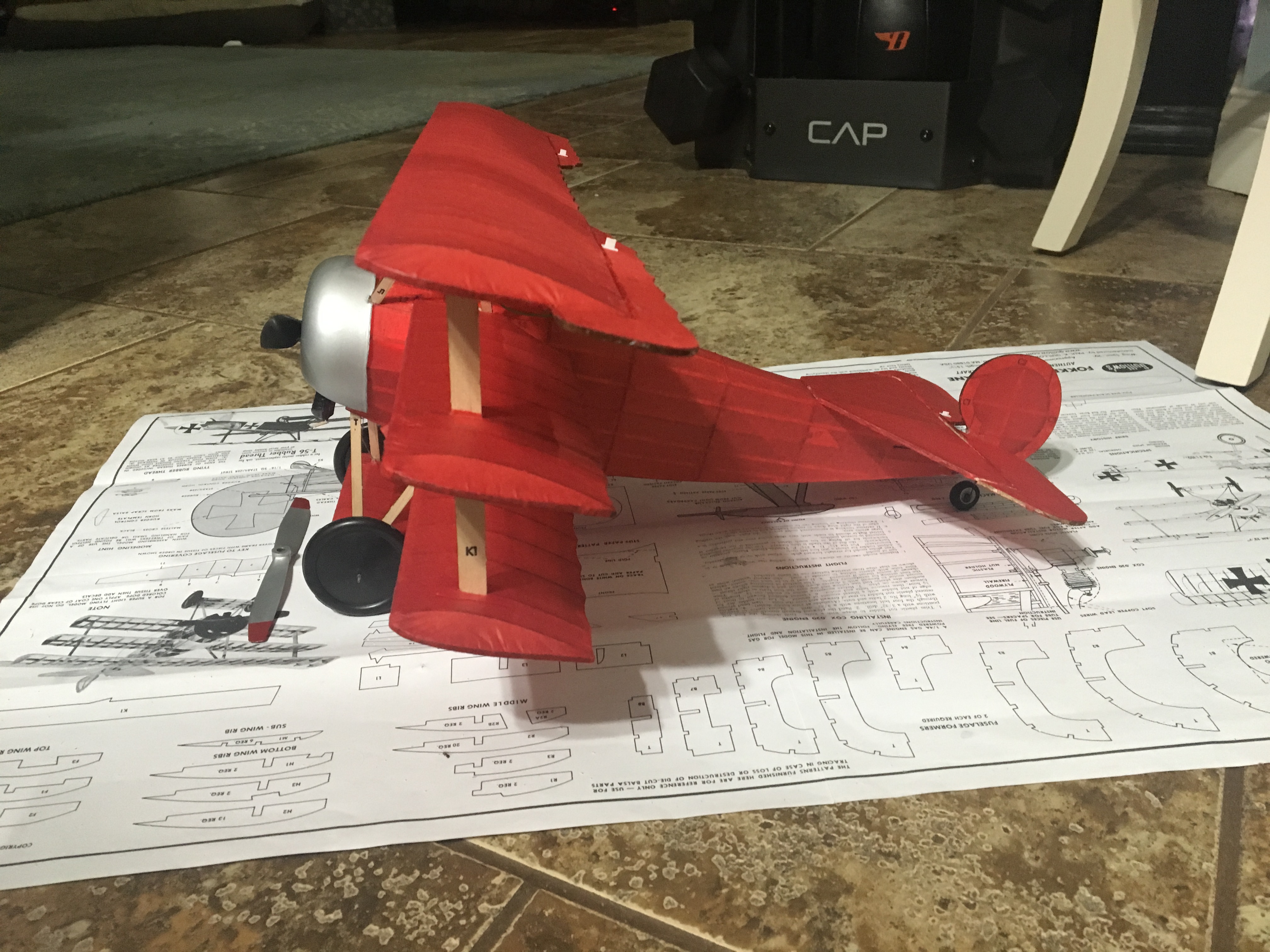 Moderator
#2
Beautiful build! Is that the e-flite motor? If so, it seems you have the correct prop for it. It should have plenty of power. Good luck with the maiden!

#3
That looks very neat.
Whilst 5.26 oz/sqft is quite low for a RC plane I suspect you will find the narrow chord wings have a poor lift coefficient and lift to drag ratio as well. It will likely glide like a brick.
The saving grace, as long as it has sufficient power, is the slot effect of the close spaced wings and their thick round nosed section will allow controlled flight at surprisingly high angles of attack.
Hope the maiden goes well.
Do post how you get on.

#5
Since the weather seems to not want to change, I went ahead and added more flying wires as well as the machine guns and I moved the servo wires. I’m currently working on the decals. I think it’s fair to say, decals suck, but it makes it look so much better. I also had the undercarriage break on me so I rebuilt it using basswood and made some reinforcements. It looks a bit beefier. However, it still looks close to scale.