#1
Moskalyev , a russian aviator designer, made some "weird" ideas of SAM Delta wing rocket jets. His radically new wing plan which, had the leading edges been straight, would have been a highly swept delta, had instead were moderately convex shapes.
Some of his designs was buildt and tested, others not (as know of).
On of theese, the RM1 (fit me perfect, as abrivation of my name..) with a 64mm edf would be fun make...
Only a bad scetch to be found, but enough to find shape and approx. measures. With some minor adjustments, i can build this with much similarity to the original idea.

#2
this idea have been around for a while, stuffed in a drawer... About time i see if do some more with it, when waiting for parts to complete other builds . A 50mm EDF is laying here, so...

#3
haha From the top it looks like a flying guitar pick. Thats gonna be crazy if you do that with edf. Will be interesting to see as I would think that was designed to be one of them flippy floppy planes not speed.

#4
PsyBorg said:
haha From the top it looks like a flying guitar pick. Thats gonna be crazy if you do that with edf. Will be interesting to see as I would think that was designed to be one of them flippy floppy planes not speed.
Click to expand...
one late vening i saw a small clip of a German or Swiss who made a RC version, and it looked like flying well. Sadly i dont find it back..

But i also found it made as a 3D flyer, even good enough to be articled in the May 2020 issue of Model Aviation. ( http://modelaviation.com/RM-1-supersonic-fighter )
-- and its stated by aero scientists, that by todays engineering, IF they had a good functional jetengine as planed that time (in 1936) and materials to make it off, its well aerodynamical could broken the mach 1 or more speed.. in 1936!!!

#5
My build is gonna be approx 650mm long, and a wingspan of 450 - 500mm (who is pretty correct in relation of each other by the notes who is found. Most was destroyed early by Russian aviation "ministry") , with 50mm EDF.

#7
well, did something.. No EDF install yet, just a 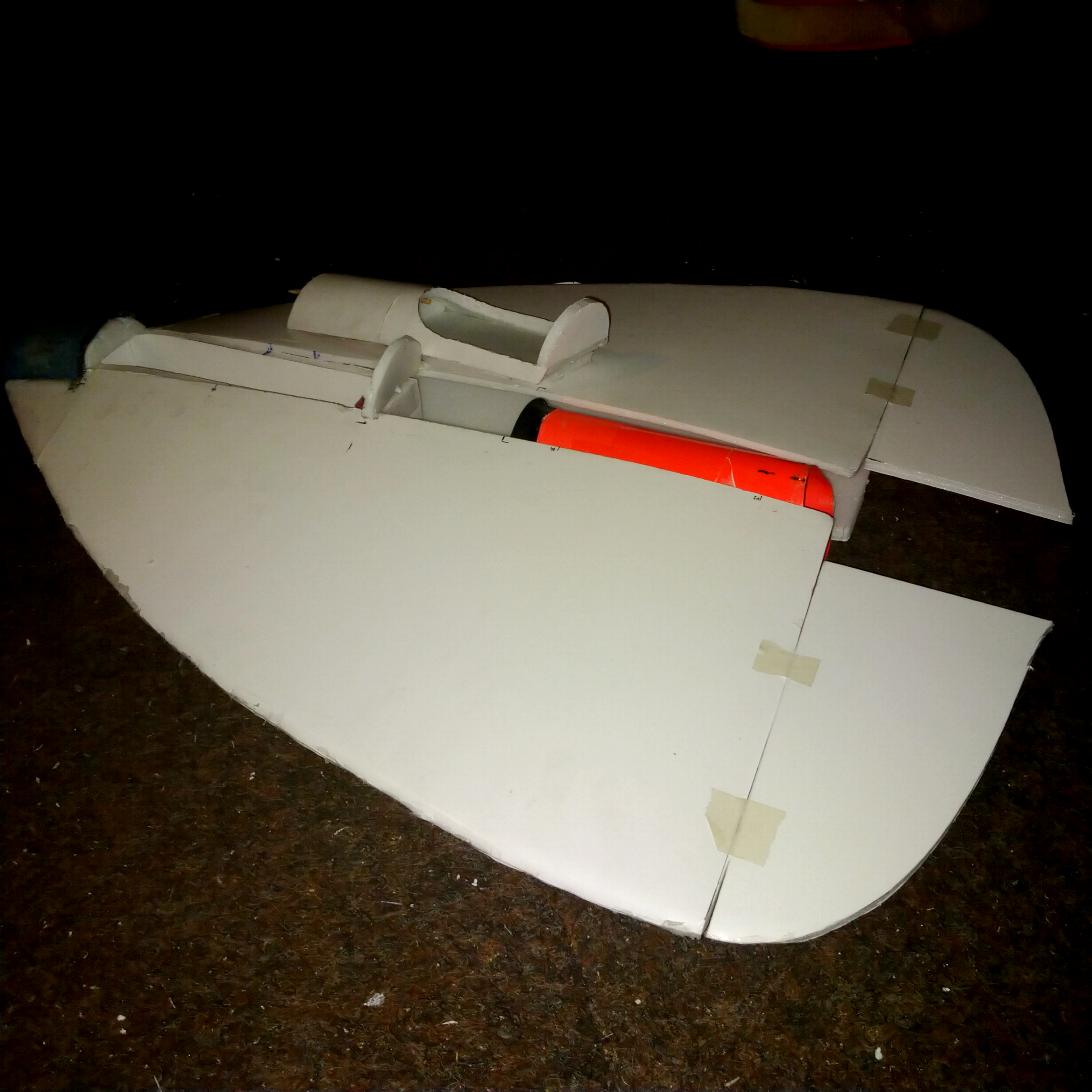 #8
easier build, than first thought... it begin looks pretty complete, but still some to do in the belly, pushrod, eg... and airintakes. Air intakes will be open spacings in underpart of leading wingedge, and also some "louvers" on top of wing. 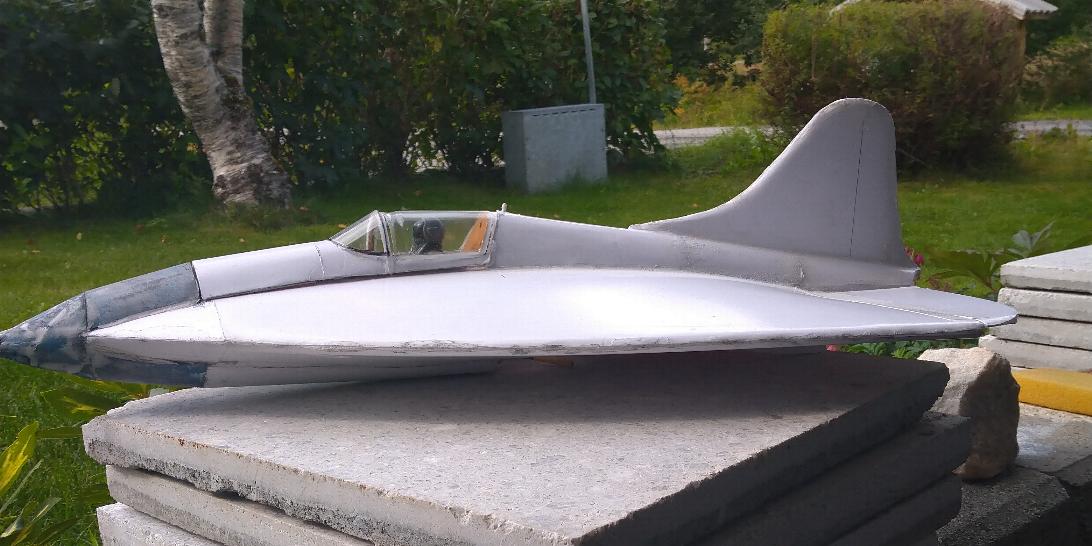 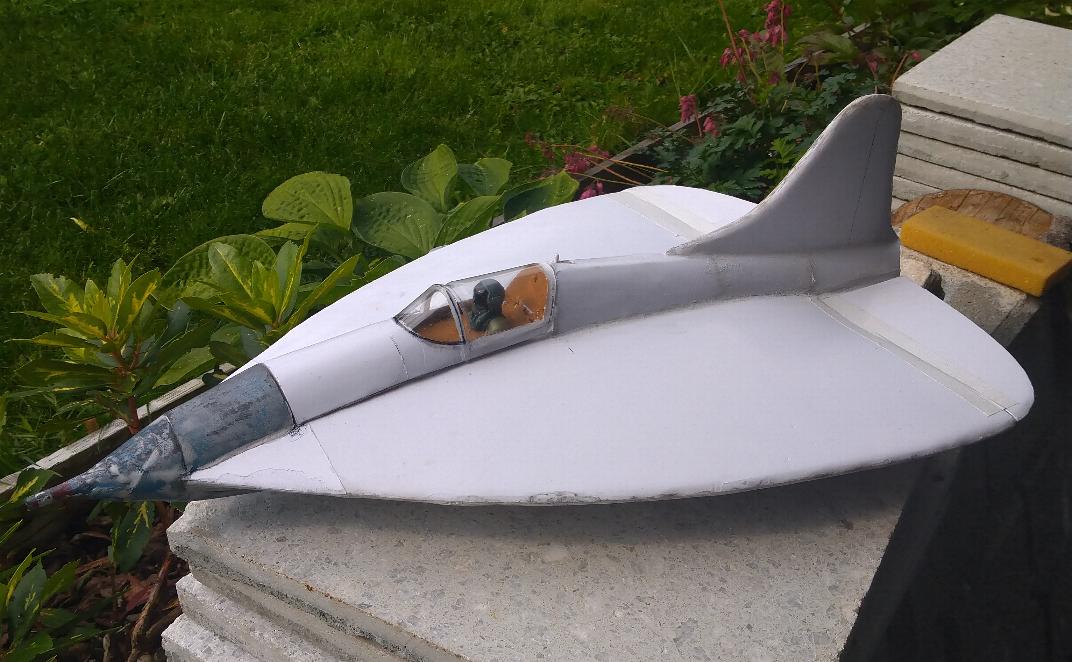 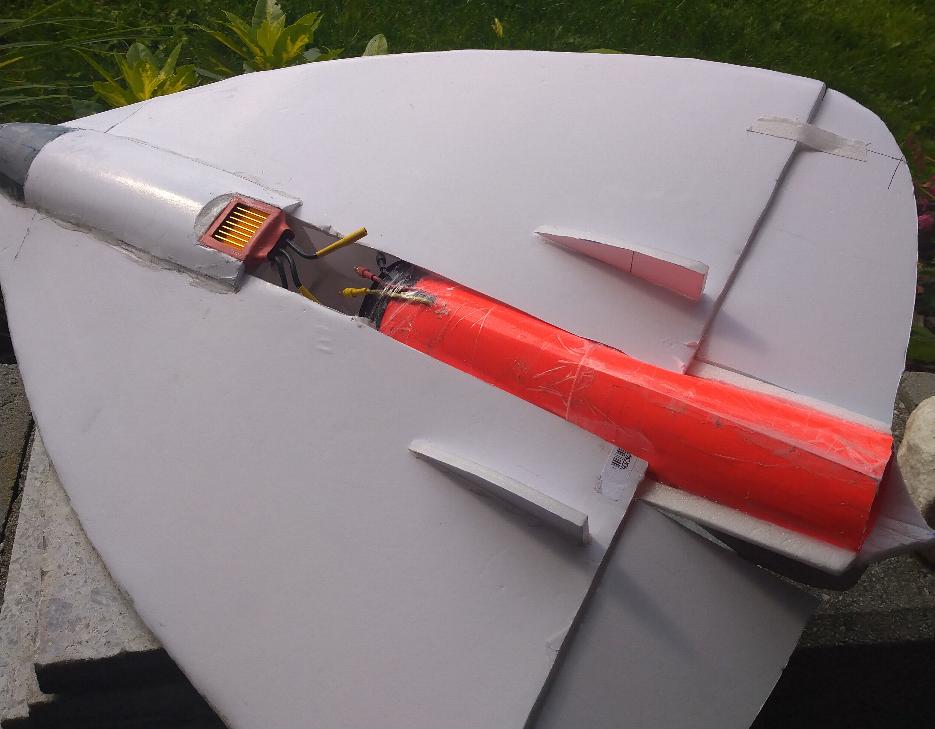 #9
i made the deltawings as shown on photos, when the two halfs glued together they made a opening adjusted to be approx 50mm in middle/cockpit area.
Made a battery/reciverbox 50mm high, and width to suit a battery (35mm inside) glued that in at cockpitarea/front to deltawings, made a coneshaped front, glued at front of batterybox, after batterbox is cut to fit shape of cone and wings..
When rear end of wings still not glued, made inside "deflectors"from trailingedge of wings to the EDF position. Slide in the EDF with thrust tube, and adjusted fit. Then glued the rear end of deltawings shut & flat.
Made upper halfround fuselage section in sections to get a little curbed profile fit against the front cone, and EDF outlet, glued on double foamboard tailfin (made as such, to get it stabile to the fuselage. Doubled and opened a little in middle, as a wing profile, it will get stabile, not easy deflect or damaged, even if glued just on a single round curbed foamboard)
Bellyfront made fit , mount ESC at rearend/underside of batterybox in the halfrounded shape there.
Yes, the "exhaustport" of thrusttube will get a little oval, as long it still have the diameter in opening as should, it souldnt matter, its wider.

sorry for not taking more pictures under build, eg, on intake deflectors...

#10
how i made the "slots/louvers intakes in skin... cut the foam, removed outer paper, and a heated solderingiron to shape openings at angle. 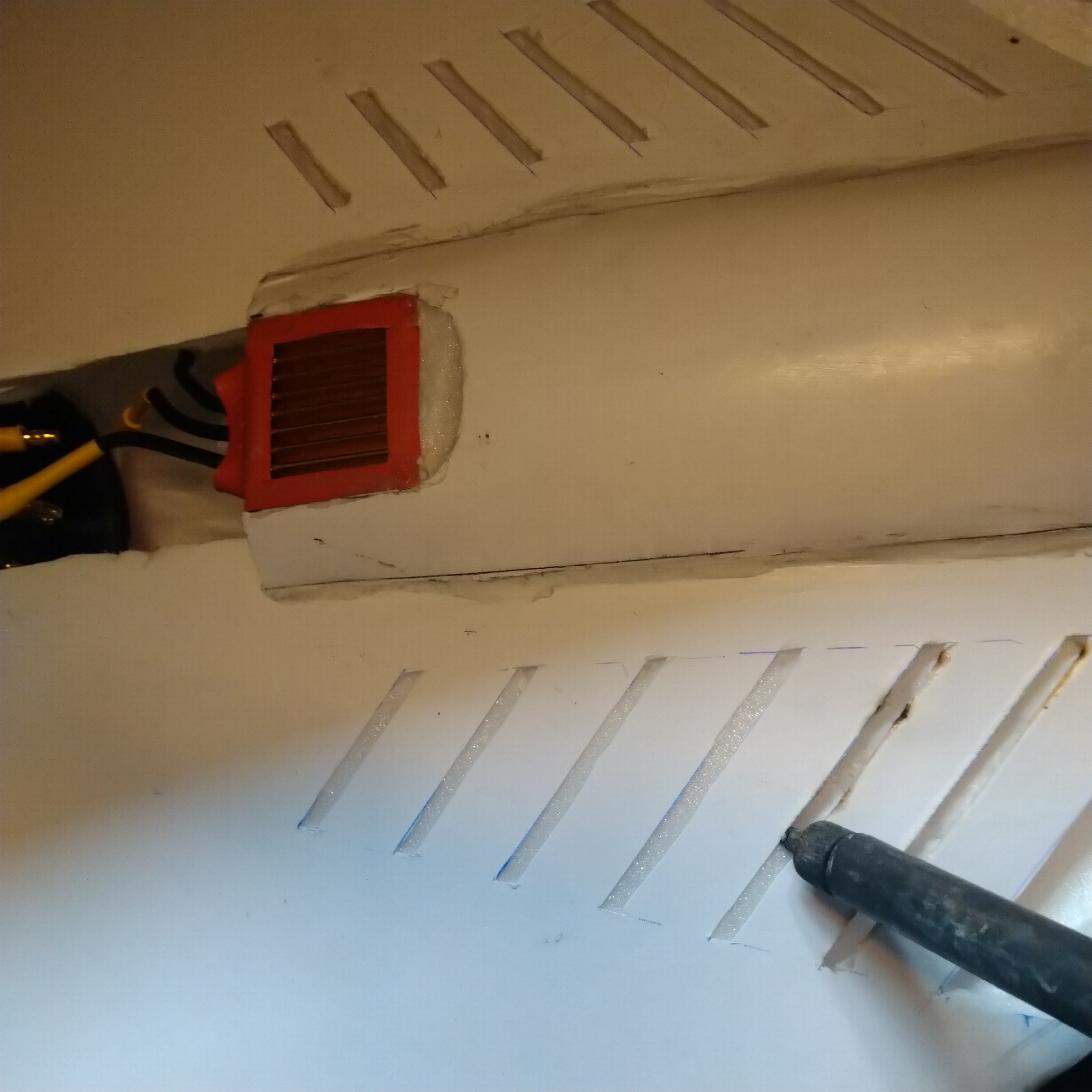 #11
here is a easier pic, cutted open who shows the inlet chennel is on underside 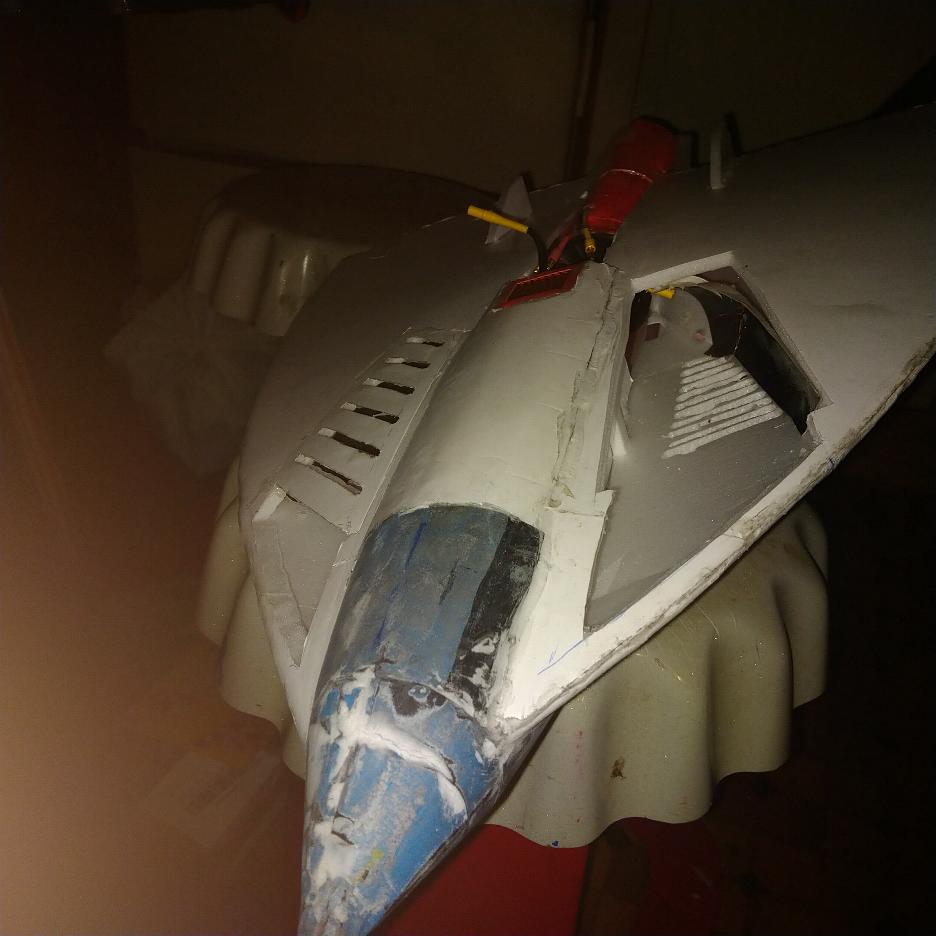 #12
..this have been my easiest/fastest build, and now its ready for fight..(if it wasnt raining "horizontal". Heavy rain and stormy wind) 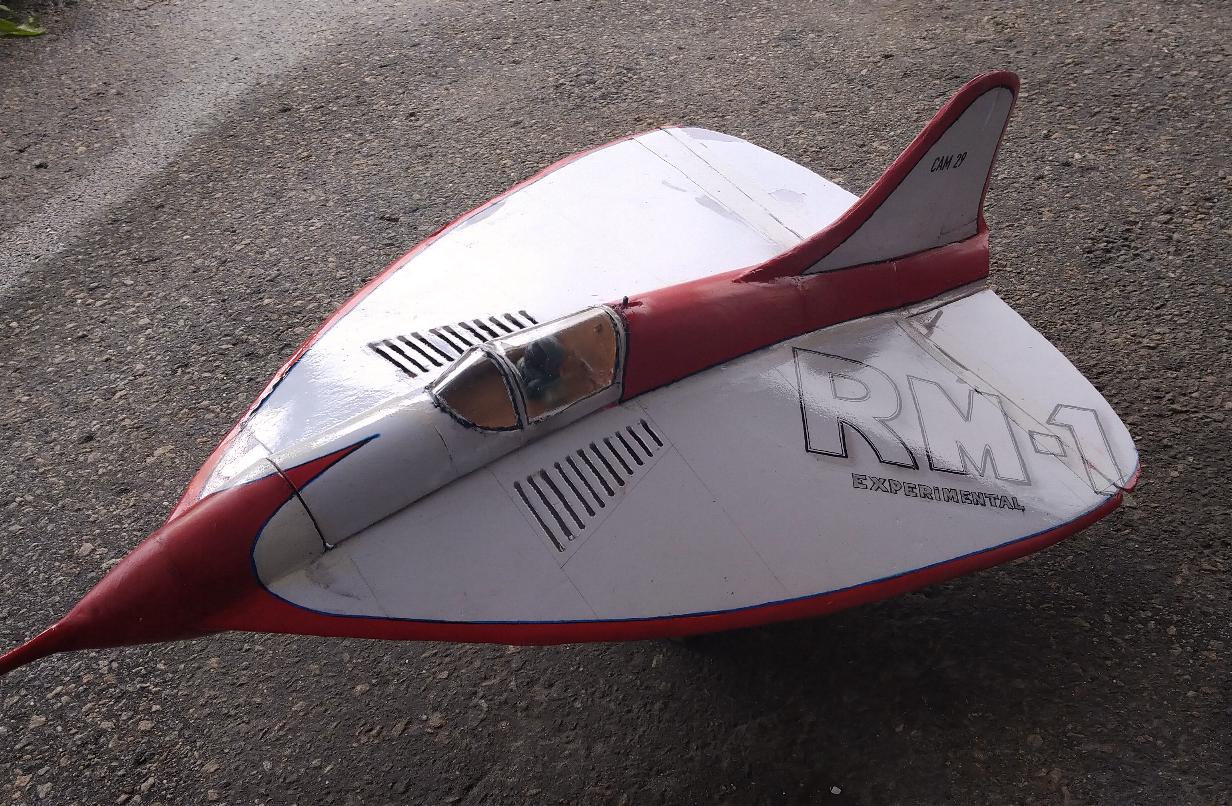 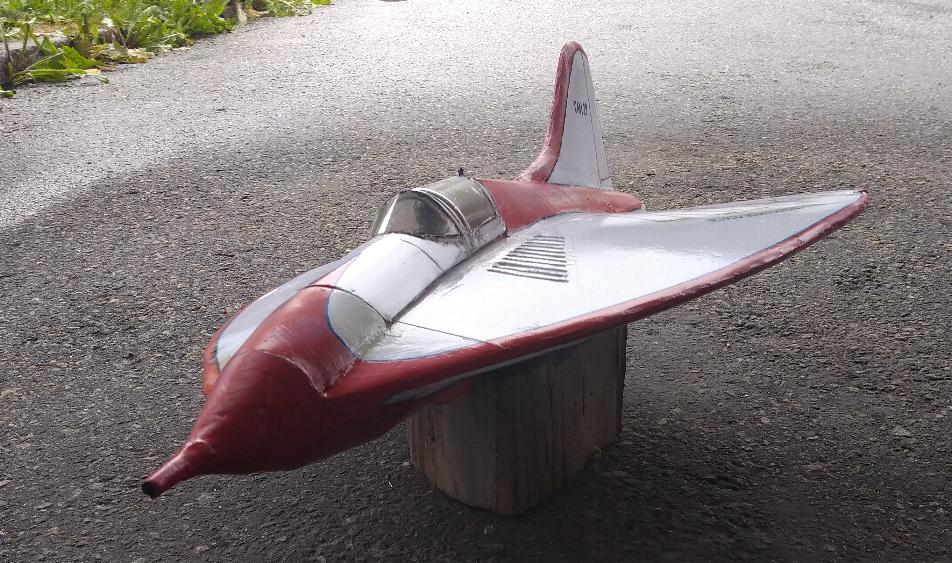 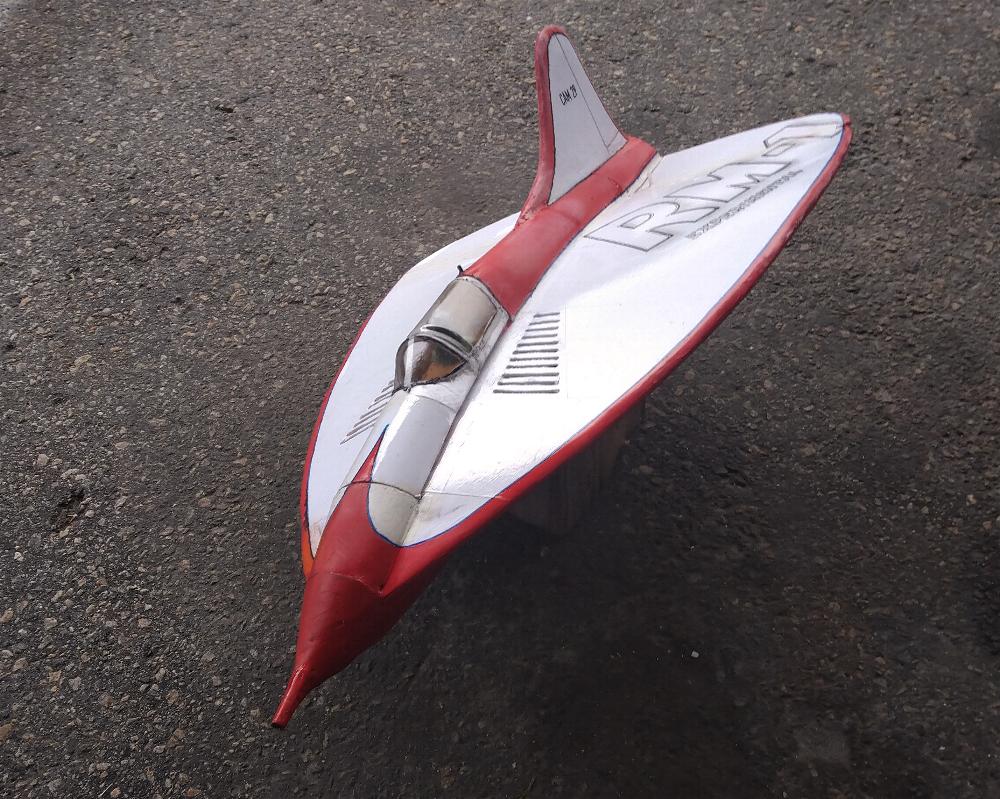 #13
a few more.... some red paint and clearcoat, black & blue markerpen, and a pencil to shadow and make panelmarkings.
50mm EDF, 720mm long at tip of frontspear, 460mm wingspan, weight total with electronics: 452g... and floats as "a dream" by glidetest. 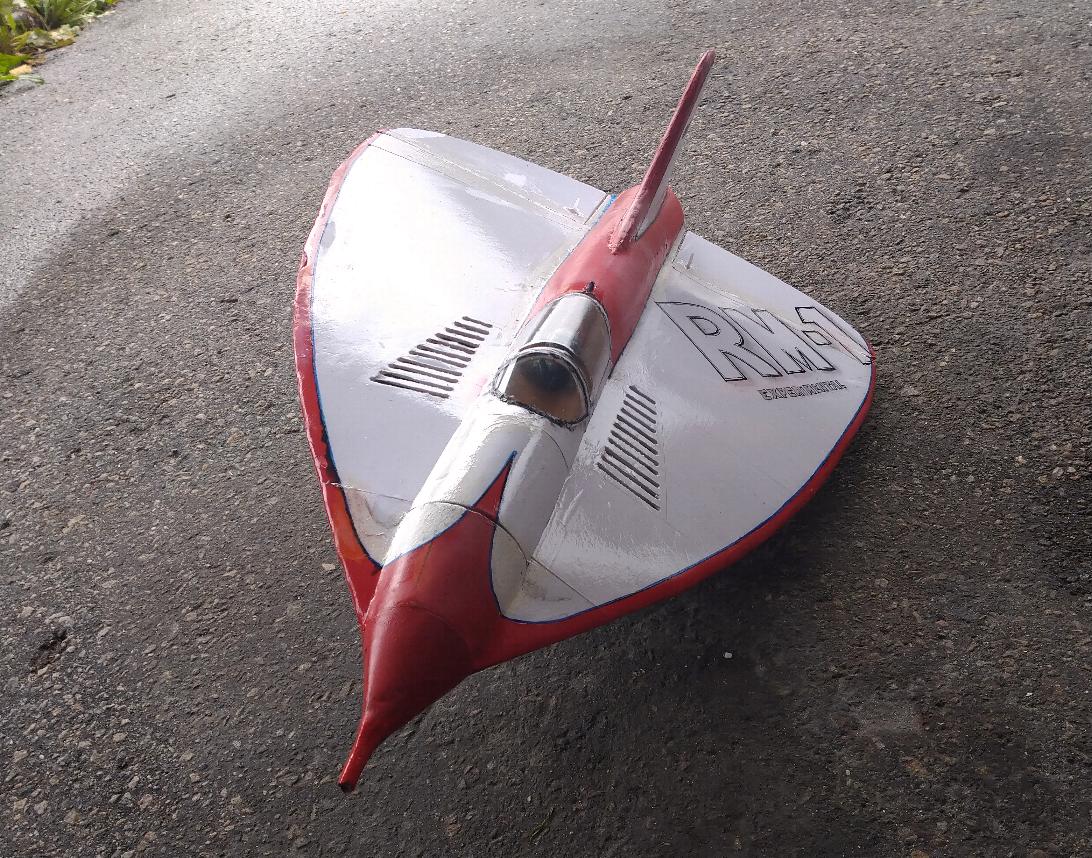 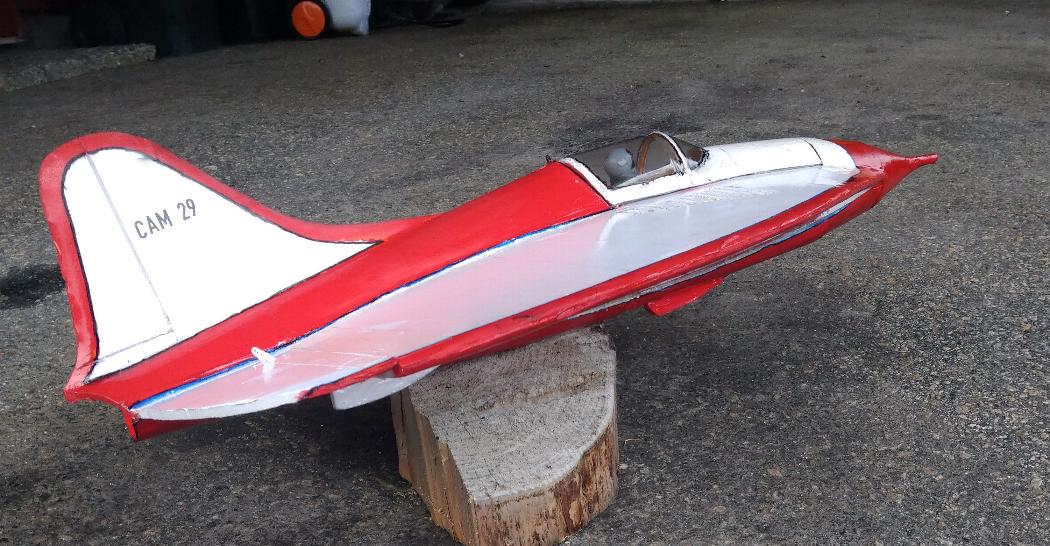 #14
That is a very interesting build.
I do wonder how much thrust will be lost as a result of the multi slot inlet ducting. Its not just the inlet area but the total length of the 'edges' the air has to pass over.
Look forward to the maiden report.

#15
quorneng said:
That is a very interesting build.
I do wonder how much thrust will be lost as a result of the multi slot inlet ducting. Its not just the inlet area but the total length of the 'edges' the air has to pass over.
Look forward to the maiden report.
Click to expand...
well, who knows? the slots are more as cheater holes.(needed or not..) . main directed inlet duct openings under the leading edge of wings, are bigger together than the EDF it self ..
EDF spec is 780g thrust by 3s.. i measured 760g with not fully charged battery 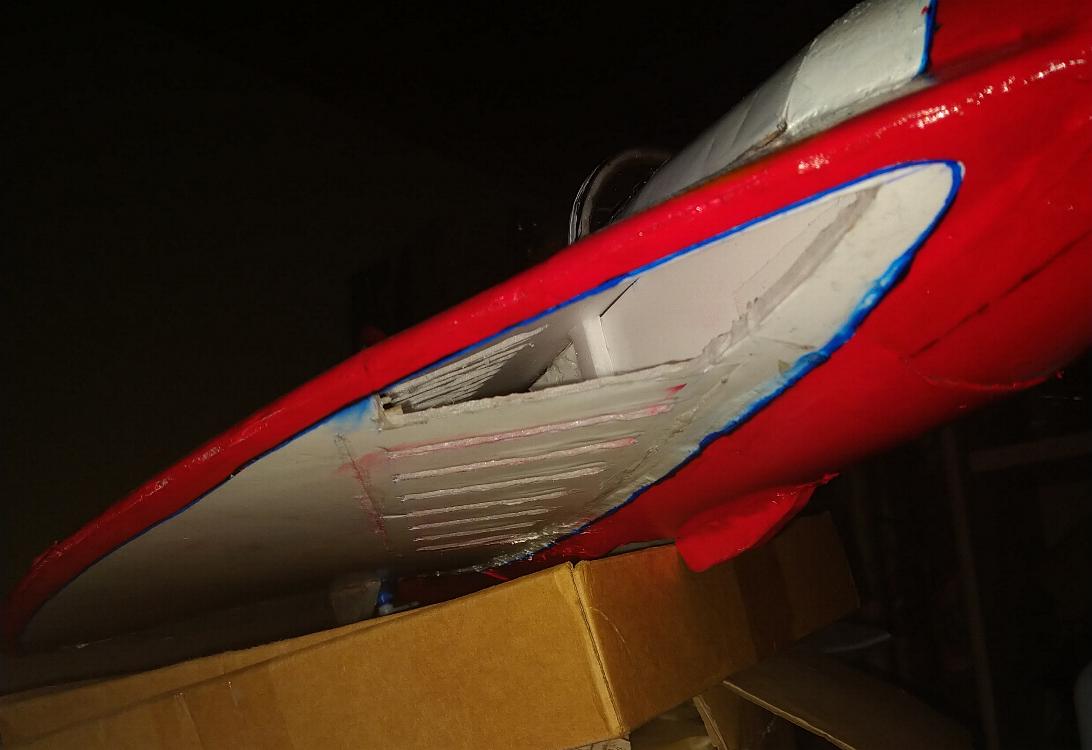 #16
it has vintage looks, awesome

#17
Yayat said:
it has vintage looks, awesome
Click to expand...
that was the point .. Thanks!