#1
Hi, I'm still newish round here... I posted a couple of weeks ago about another scratch build which went rather wrong (I think mostly the tail wing incidence was completely wrong), and got some great advice from Clolsonius, and Hai Lee, among other people.

I said I would try to use their inputs to correct my next one so here it is...

What I wanted was a light as possible (previous best was 295g), low wing trainer plane which would get me some stick time on an easy warbird, before trying to build a new "mini mustang" which on 3S power was a bit much for me last time. 40 seconds from maiden to total destruction.

My girlfriend offered to buy me the legendary "Parkzone T28" for christmas, but I said no, I'll crash it in 2 minutes, I'd rather build one myself and just waste my time instead of her money. I downloaded a T28 plan from the internet and started playing with me excel. The T28 is definitely a very chubby plane, and given that I build with lumps of foam, not board, and the electronics I already had available - 2204 size motor, servos, radio, I realised that below 1m wingspan, it was going to come up too heavy. 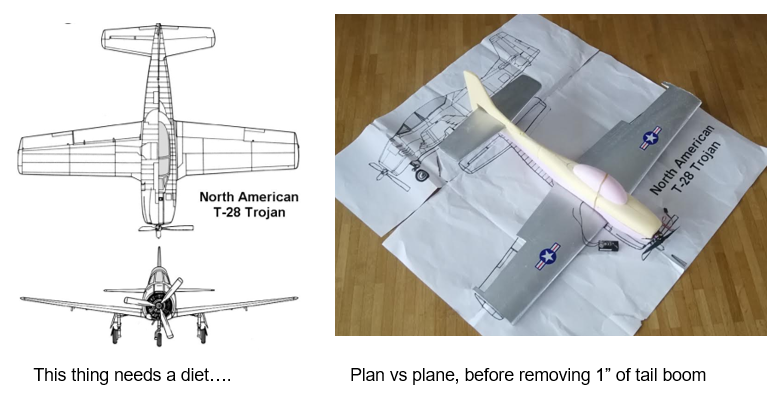 I wanted the plane to be in the "Wing Cubic Loading" area of 6-7, for a trainer, with a wingspan of 75cm, to keep the absolute speed and size slow so it could be flown in the local park without causing various pedestrian and dog-walker incidents or police interest. My calculations suggested I could do this at about 235g, but I should increase the wing area to get where I wanted in loading. I decided to increase the wing root chord a bit and reduce the taper (which should anyway help with stability).

I have a new hotwire wing-cutting setup, using 12V nickel chrome wire, a car battery and some jump leads. Using a technique I saw somewhere on t'internet, I cut wing sections (Clark Y) and aligned/glued them onto the ends of rough cut insulation polystyrene foam, to use as guides to allow the wire to cut out a complete wing of any shape which varies smoothly in section across it's length. Well, the method makes quite a bit of carcinogenic fumery, and I'd recommend ventilation if you're trying it. I still don't have it down right (you really need to keep the cut going at a slow steady pace). After smoothing with fine sandpaper, I could get most of the profile good, but some small burn holes and roughness remained. I decided I wasn't going to get significantly better any time soon, so I foiled over the wings and tail and called it good.

Because of paranoia about the amount of wing taper and tip stall possibility, I went for quite a lot of washout twist-down of the tips. I calculated 3° but perhaps I got it wrong. Would be interested to hear if anyone has any comment about that picture. I realise that too much washout will prevent tip stall but start really reducing lift at the mid sections of the wings, and causing lots of drag.

As I'd made the wings longer (going from 6:1 to 5:1 aspect), I thought I should increase the tail boom length to compensate. Well, this wasn't a good idea. At some point in the process, I realised I just was never going to get a decent balance of the fuselage, and had to go through the nerve-wracking operation of cutting an inch out of the tail boom, fine sanding down the joint, and reglue-ing the tail back on. So finally the wing and tail positions are quite similar to the T28, but the fuselage was made a lot smaller to save weight. Came to 219g all up, with wing load 6.6 oz/sqft and cubic load of 6.1, so at the low end of "trainer". Lots of playing around with balancing loaded and unloaded, decided the balance point looked about perfect between 25% and 33% of mean aerodynamic chord. 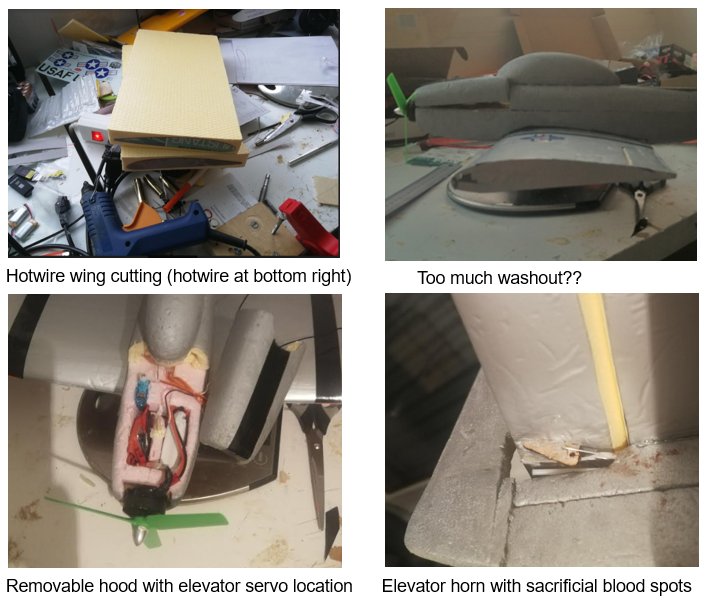 I took the time to make sure the elevator control was right after the comments here on my previous build. Took 3 goes to get right, and I realised how much slop was in my tail before. Just putting the (pretty thin and flexible) linkage wire through servo / control horn holes with a "Z shape" was not enough, so at the horn I added a small blob of hotmelt, to give a smaller hole which made the flex of the tailplane that much less. At the nose, twisted the linkage with pliers to really keep it tight and spent time ensuring the plastic control linkage tube was not allowed to flex within the fuse. Stuck the linkage through my thumb a couple of times and decorated the fuselage a bit for good measure.

Didn't bother with a rudder, but put the plastic tube through the fuse to allow one later, with a place for the servo on the other side of the nose from the elevator one.

OK, so finally after setting the rates, with plenty of expo in ailerons and elevator, I took it to the field yesterday. Absolutely great flier couple of notches of trim and I can let it fly hands-off for short periods. Really happy with it. Actually it might be a bit dull to fly around without the desperate panic factor every 20 seconds. Banks quite quickly on high rates (although ailerons are scale), but couldn't get it to loop at first, using my usual 3-bladed prop (on a 2S setup). It would just run out of energy really quickly as the wings are so draggy. Putting a 2 blade prop on gets more torque, and looping was possible, but the cost is one prop broken per flight. 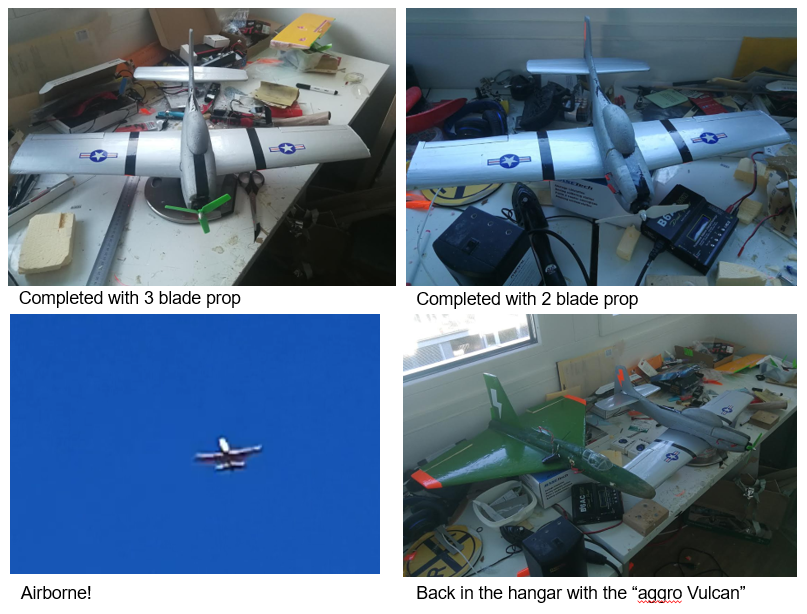 Think I'm going to enjoy flying it for an hour or so, then consider rudder and undercarriage if it's still in one piece.

Anyhow, thanks for reading, would be great to hear any +ve or -ve technical comments.....

Mentor
#2
Great looking build! Nice hotwire work too - it took me several attempts to get results any where near that nice