#1
I have been flying and building for about 4 years now and finally feel like I am ready to tackle this challenge after successfully building the A-10 with modified nacelles and ducts. I want to build a 737 that can be built relatively easily and not require any special plywood or 3D printed parts. As well I want to leverage two mini power pods with props for thrust. I know many purists will not like this but it worked really well for the A-10 for me and when its in the air you cannot even tell its not using EDF's.

Started drawing in sketchup from 3 views and took the approach that I have seen @DamoRC do so will with a score cut/gorilla glue approach. The current model has a 40" wingspan and length of ~38". I plan to use two F-pack equivalent motors and the battery will be determined by how much weight I need for CG. Targeting a 3S 1300 or 3S 2200 if possible for longer flight times.

Model starting point below. I have not added the fold-over wing as I can never get that modeled well in sketchup but the idea is for a three part fold over wing. I plan on using differential thrust so will use two servos for the elevators and two servos for the ailerons. 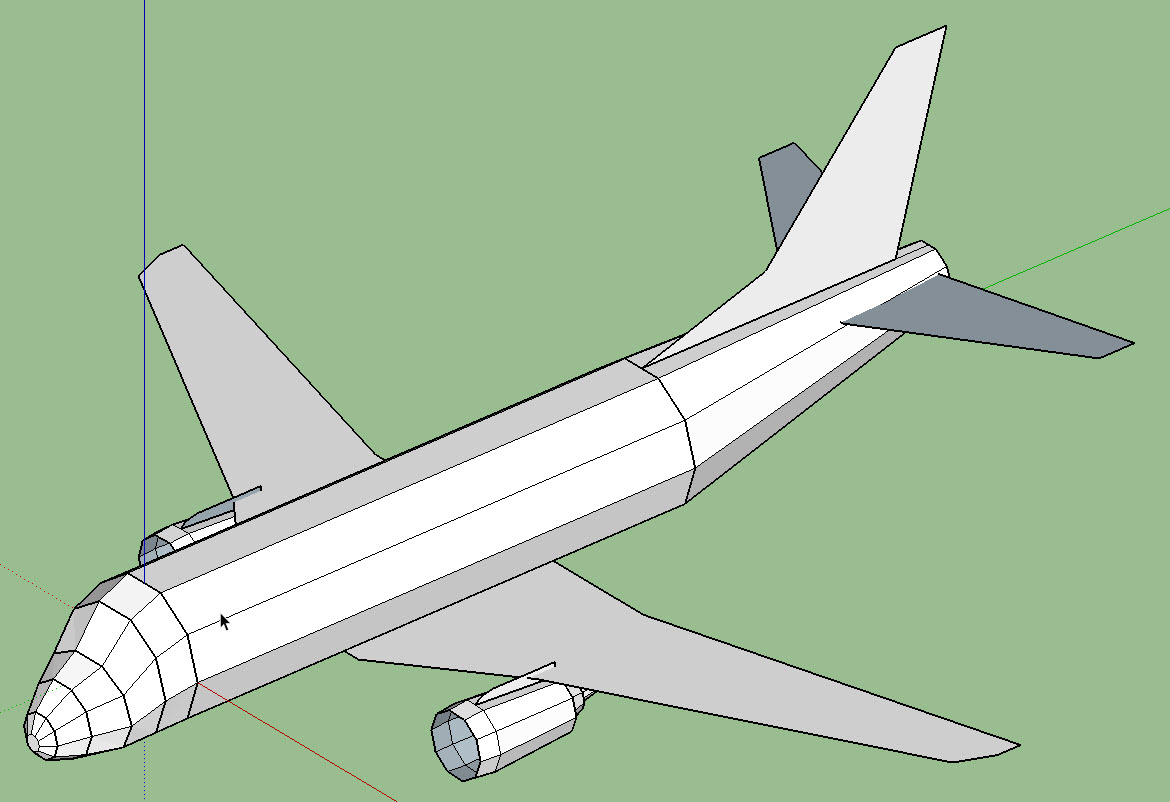 1. Wing
Starting with the wing, cut as normal and score cut the creases. Double bevel the leading edge. The blue markings by the wing tip are for optional BBQ skewer reinforcement. Attach the trailing edge spacers. Insert the wing spars and do the wing fold over as you would for a normal FT wing build. The small blue rectangular area should also be cut out and may need to be expanded later once you fit your nacelles. Add in the center spars by just aligning them to the main spar edges and then horizontally across. Finally fold over the rectangular center portion of the wing. Servo placement is not noted on the plans but I put mine between the two main spars. When done it should look like the below. Make sure you then make a right wing by flipping the plans. Do not attach the wings together at this point. 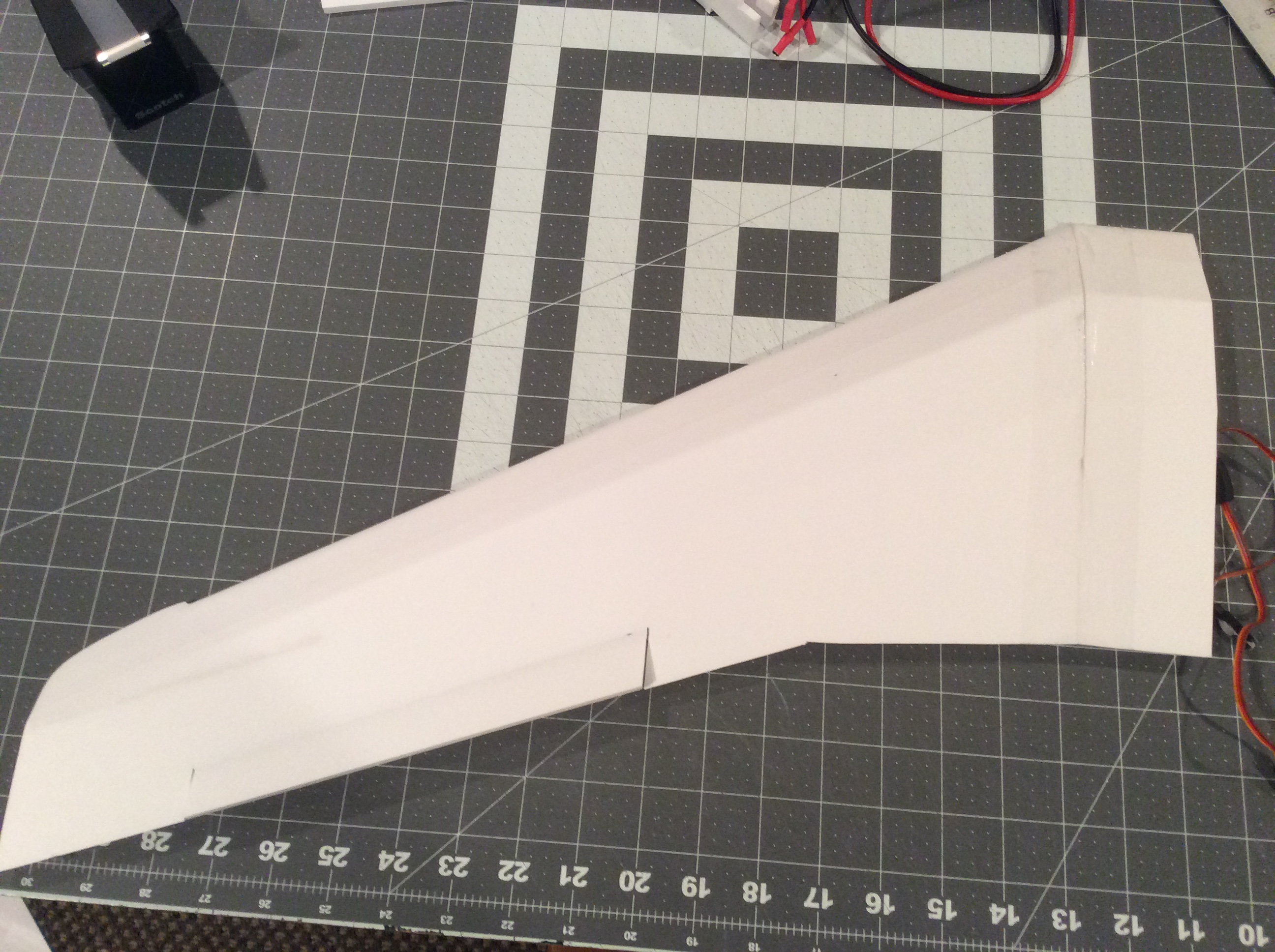 2. Fuselage
Build the center fuselage section first. Cut the wing slots partially only at this time. As well transfer the blue lines on to the foam. Score cut and open up the cuts with multiple passes of the blunt edge of a bbq skewer. I fill those scores with gorilla glue. Apply a bead of hot glue to the edges and glue them together. Place the tube into the two fuse formers (identical pieces on top left side of the plans) and let dry overnight. This ensures that as the gorilla glue expands that your fuselage is not deformed. Repeat the process with the rear part of the fuse. Do not cut out any of the rectangular cutouts but just transfer the locations to the foam. Use one of the fuse formers on the large end of the rear fuselage to keep the shape while the gorilla glue dries. Lastly use hot glue to attach the rear fuse to the center fuselage with the two central notches (for the vstab) facing up.

Once everything is dry complete the wing cutout on both sides. Then cut along the blue lines and remove the lower section of the fuse. This is where the wing will slot into. 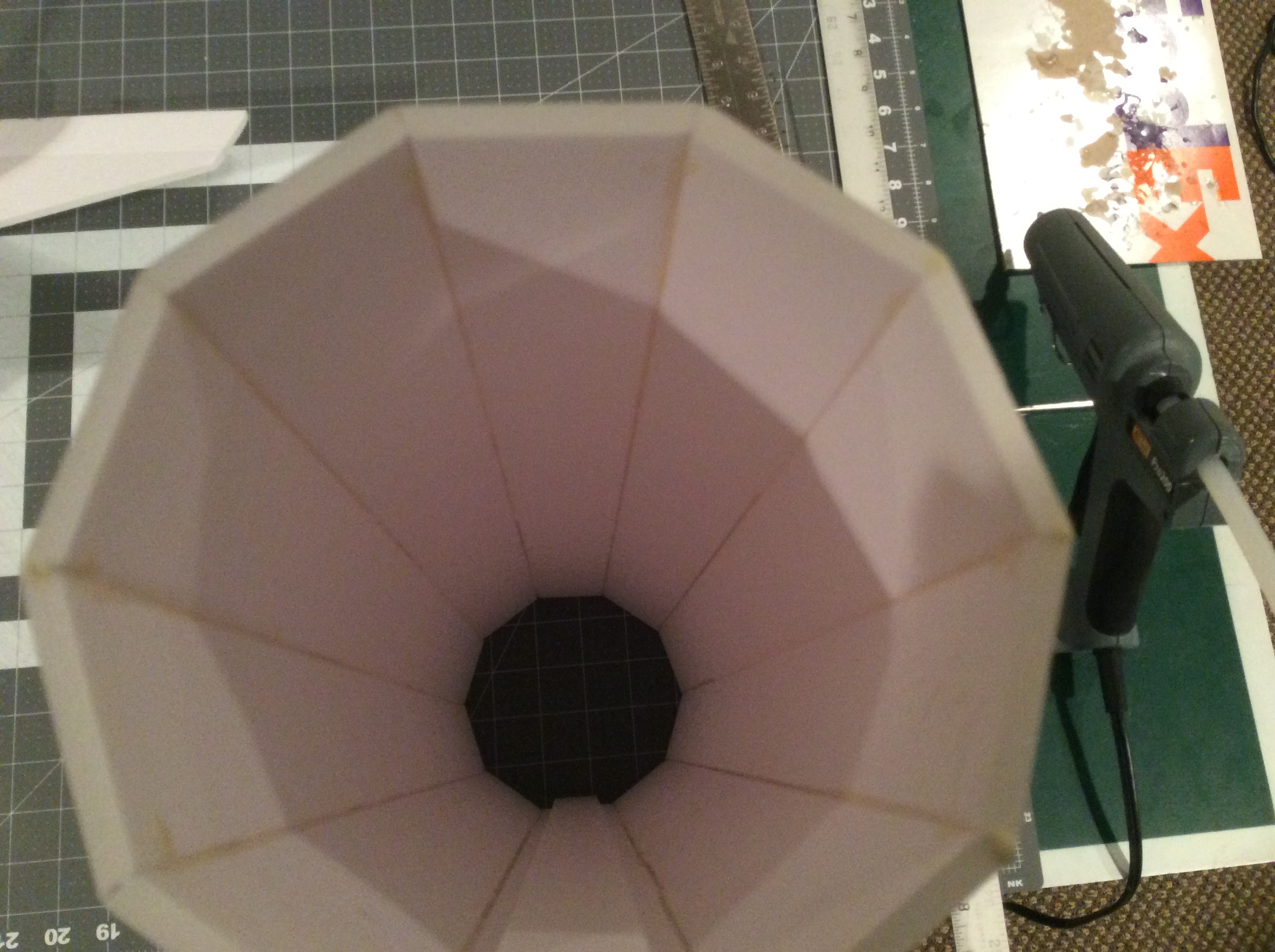 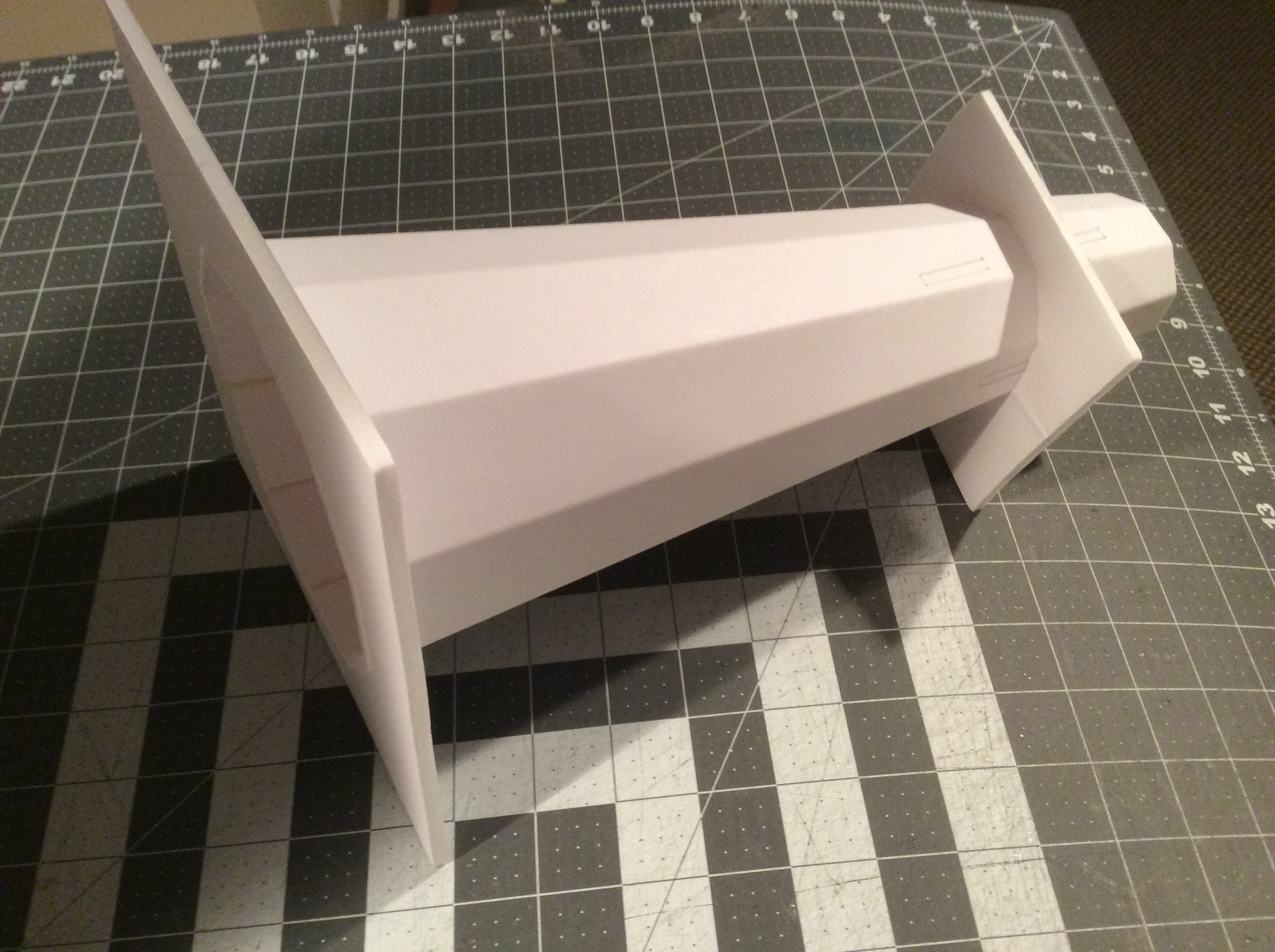 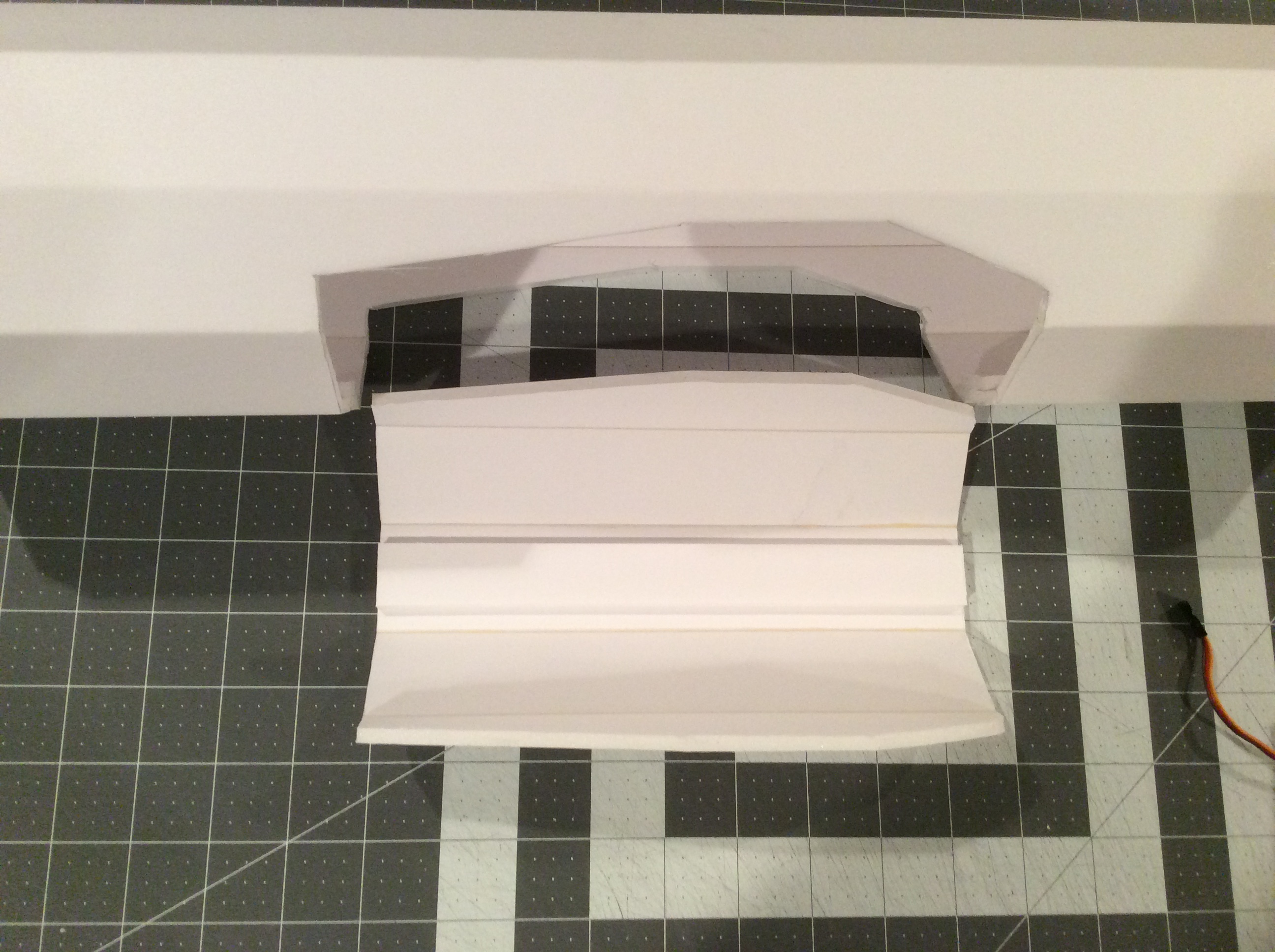 3. Engine pods
First glue together the motor mount supports. They will form a plus sign shape. Next like the fuse, Mark any of the cutouts, score cut, open with a bbq skewer, gorilla glue the cuts and hot glue the seam together. Use the former for the larger end of the nacelle and let dry. Test fit the motor mount and then gorilla glue that in place. Cut the nacelle connector pieces (4) and glue them together as shown in the picture. Also cut the end cap and glue that as shown below. Attach your motor to plywood, gift cards or whatever you have to mount to and gorilla glue that to the foam mount. No thrust angle. Lastly score cut the nacelle front piece, score cut it but no gorilla glue as this is small. Start at the seam and hot glue in place in sections around the motor (not shown).

Now the fun part! Your esc gets connected to the motor and wedged into the nacelle with the esc wire and battery wire running up through the cutout in the nacelle to wing connection (those four pieces of foam sandwiched together).

If all is good test your motor rotation and then glue on the rear of the nacelle. 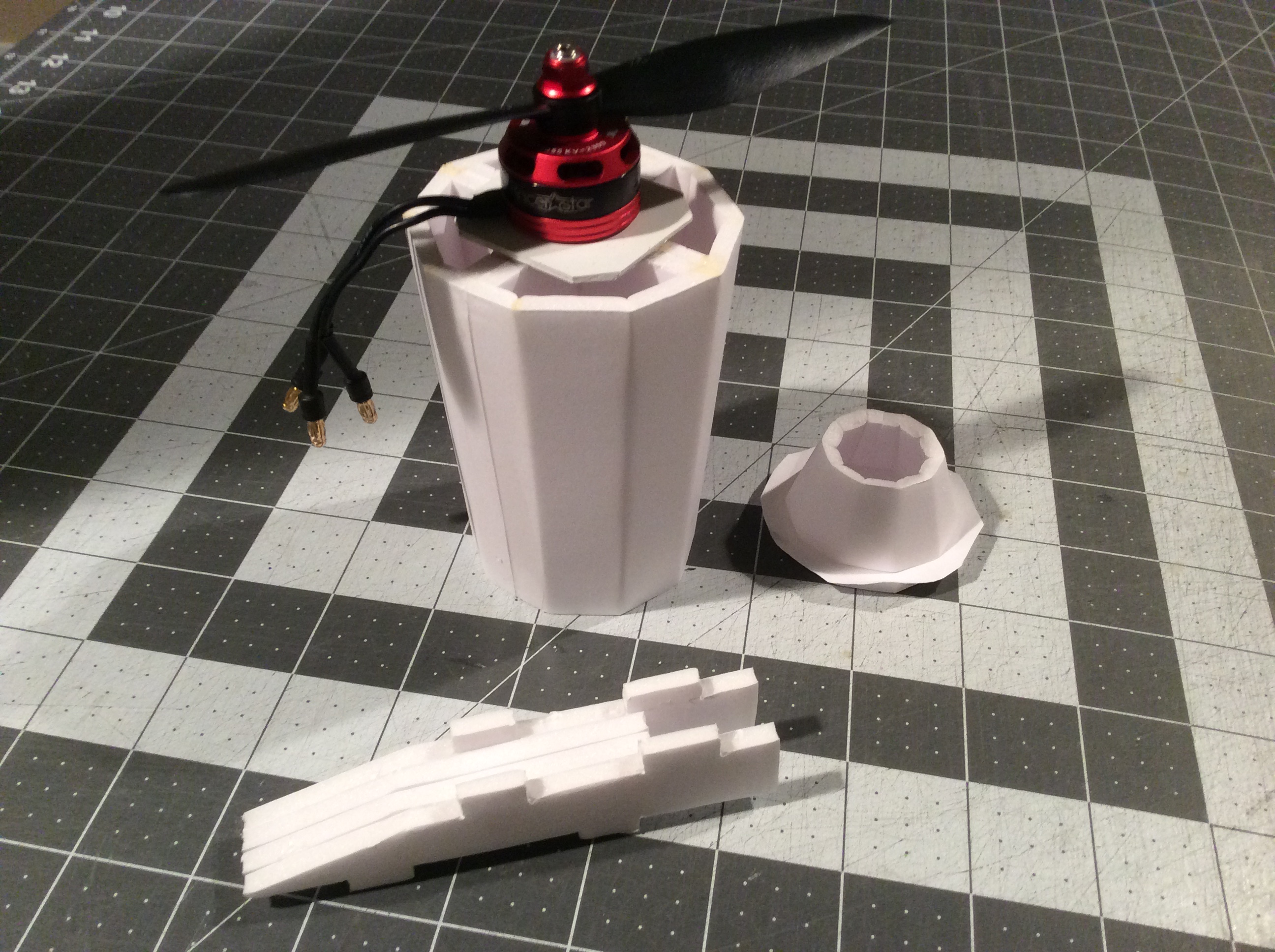 4. Wing electronics and mounting
You will either need a "Y" battery cable extension like other FT dual motor planes or I created two individual leads with a connector for the battery. Fish your wires now and repeat on the other side. Looking at the bottom of the wings, line them up and apply a piece of packing tape. Then like most FT wings apply hot glue where the wings will meet and hold one wing half flat on the table and the other half 3" off the table. When dry apply a piece of packing tape to the top, cutting around the mess of wires sticking out the top.

Plug in each nacelle and shift the wires around until everything fits and glue the nacelle to the wing bottom. This model has a removable wing so reinforce the inside of the fuse with either another piece of foam or a piece of gift card with a bbq skewer hole. I do this about 1/2 " in front of and behind the wing hole. 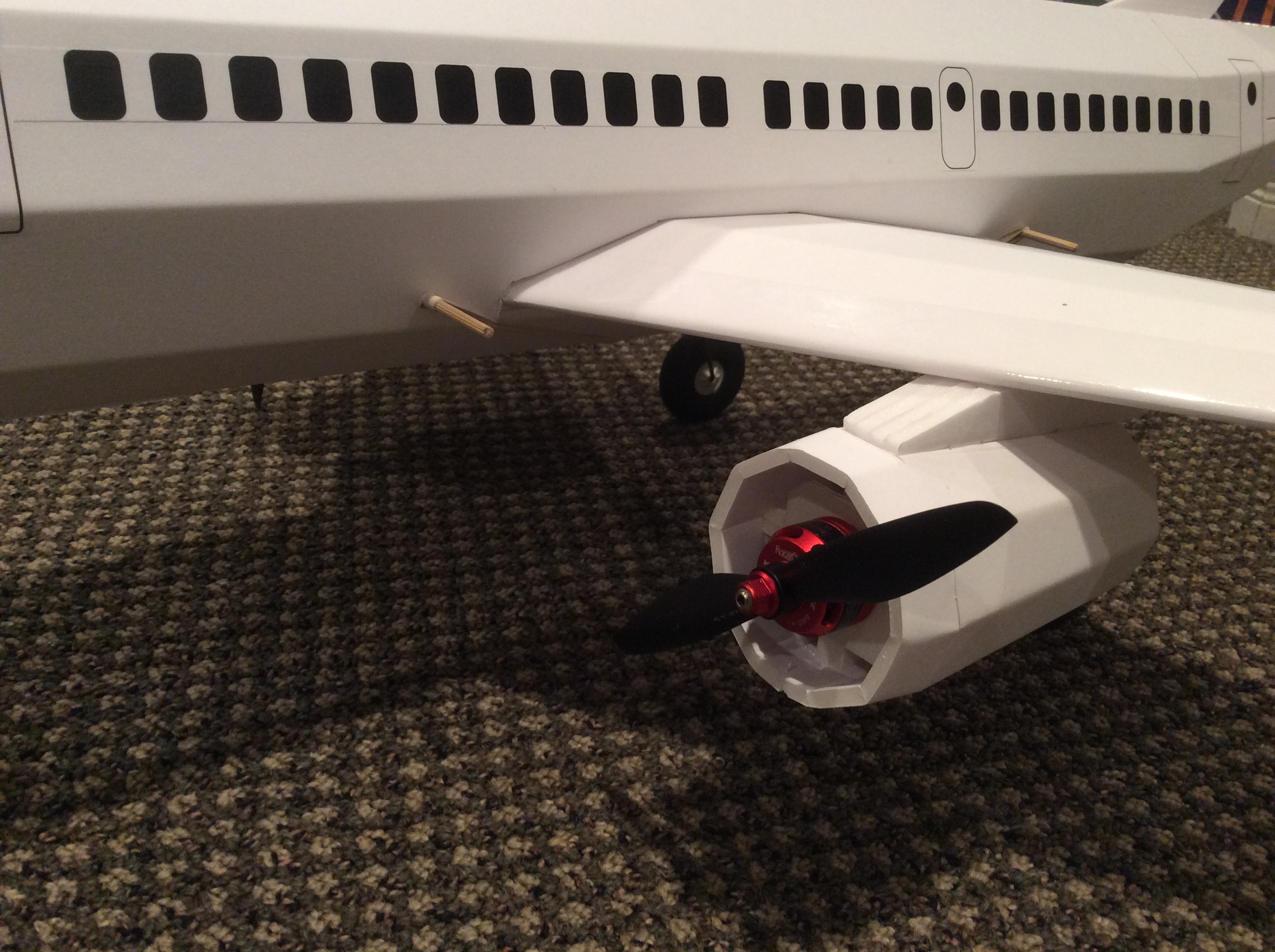 5. H Stab
Glue the H stab in place. I have no real guide for the angle so I went with the TLAR approach. I run a 5g servo for each half of the elevator. Servos are mounted inside the fuse, approximately where the main fuse meets the rear fuse. Cut a slot in the rear fuse for the pushrod to exit and connect up to your servo horns. 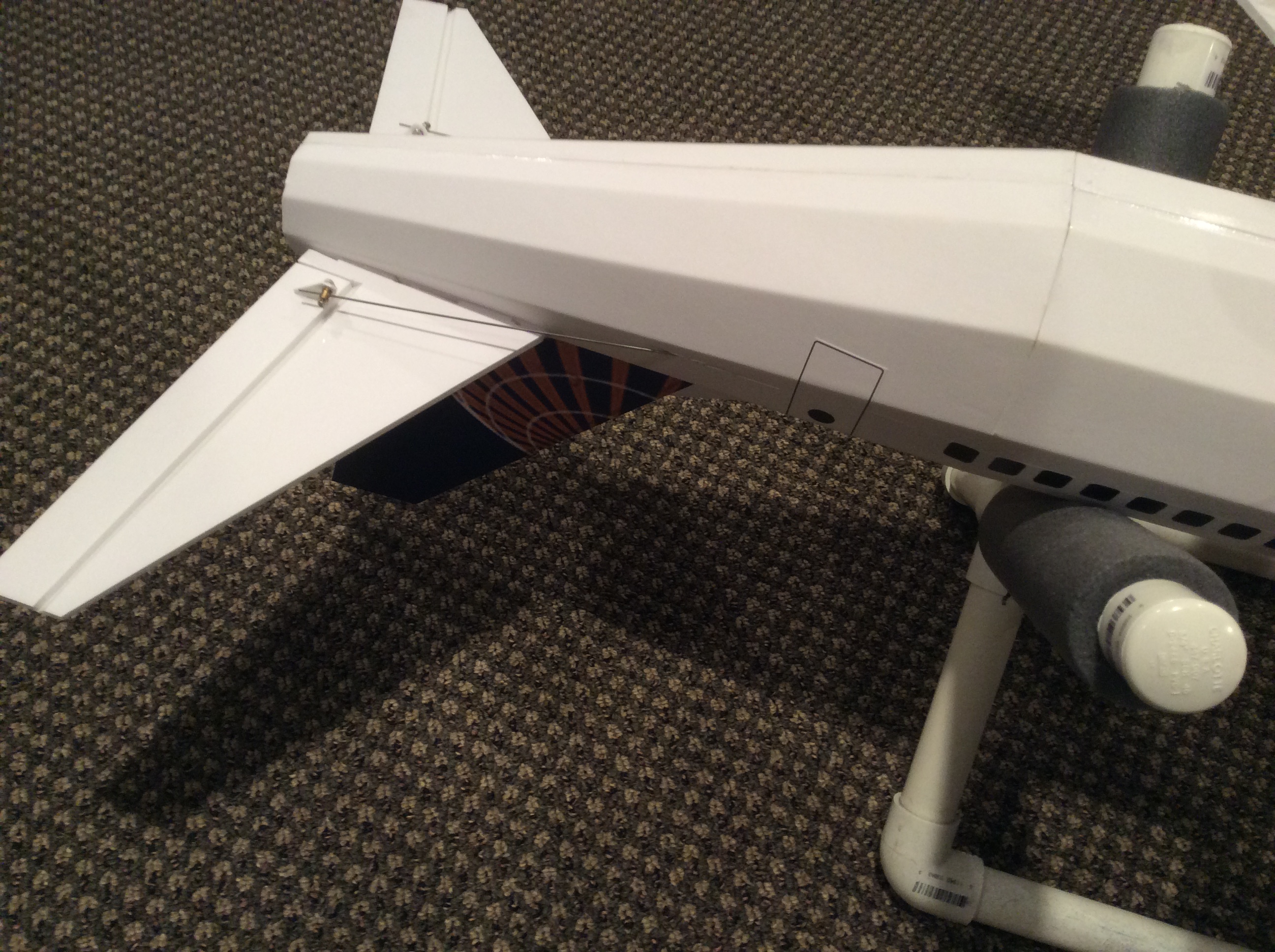 6. Nose
The last part and biggest PITA. Starting from the main fuse, repeat the same process. Cut each piece, score cut and use a bbq skewer to open the score. Dry fit to figure out the angle and where you need to bevel the piece to get a tight fit against the fuse/prior nose piece. I start with the top section hot glued in place and work my way around to the bottom, then repeat on the other side. Repeat this for each nose piece. You will need a small piece of foam with excess paper surrounding to cap off the nose. Nothing in the plans for this as the nose shape ends up slightly different each time.

7. Final bits
I mounted my receiver on the top of the wing and my 1300 3s directly behind the wiring bundle sticking out the top of the wing. You definitely need some type of landing gear or the nacelles will rip off on landing.
Last edited: Sep 27, 2019

#5
Prototype wing started. Definitely need to rework the spars. They will start at 10mm and decrease to 5mm with nothing towards the wingtip. Not sure there is enough chord. The rectangular section will be inside the fuse so it starts at 8” but tapers to 5” and then down to 2”. Think it will be enough wing area? 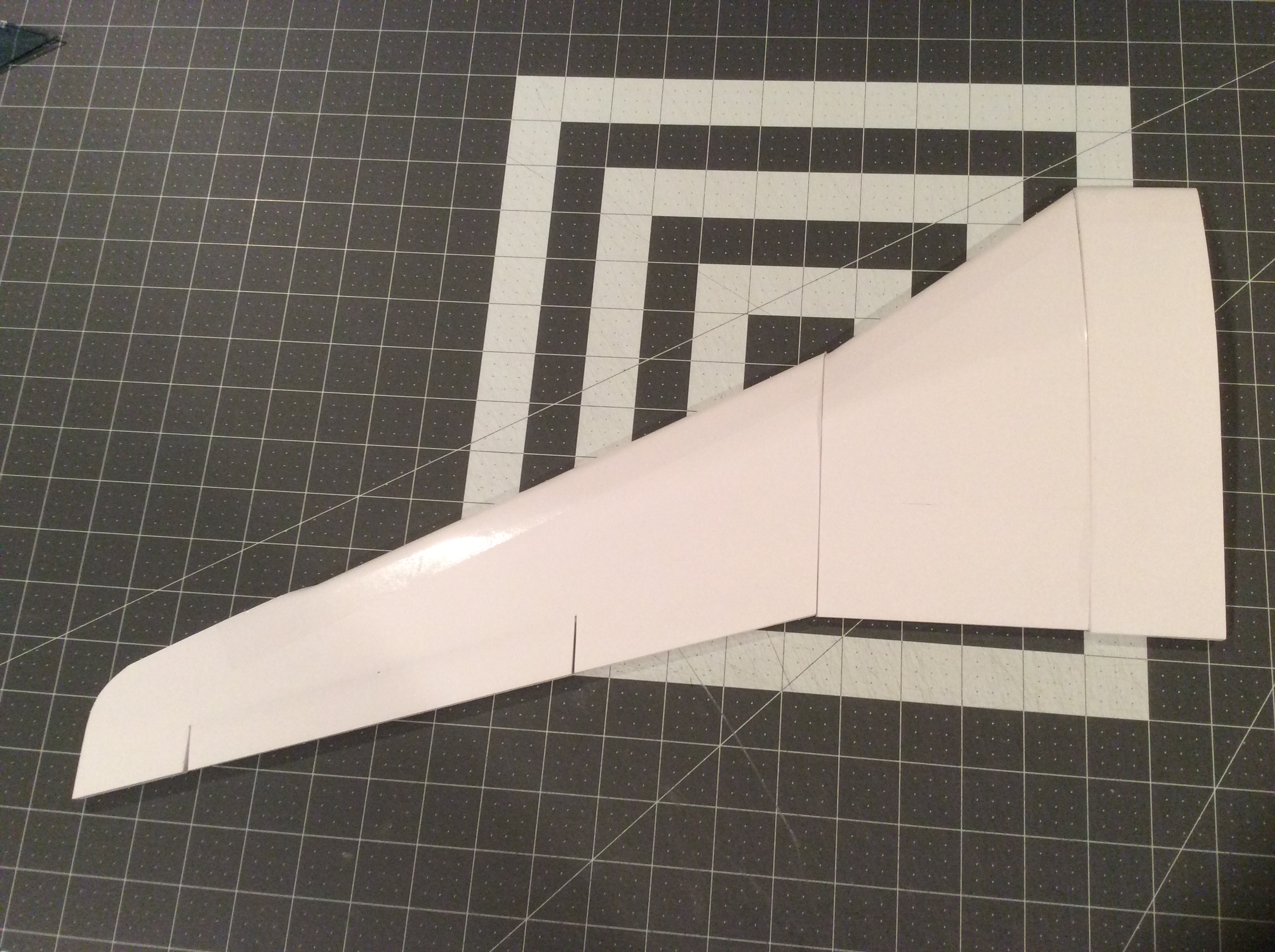 #6
I don’t know about the wing area issue, but I’ll definitely be watching this! What size of props are you thinking? To me it looks like with the wing sweep prop clearance could be an issue...

#7
V2 of the wing and I think things are looking good. Added 1/2” to the chord and changed the spar setup so it folded together much better. Not perfect but good enough for now. Thickness goes from 10mm at the root down to 5.

Next to start on the engine nacelle to see how it will fit and how to route the wires. 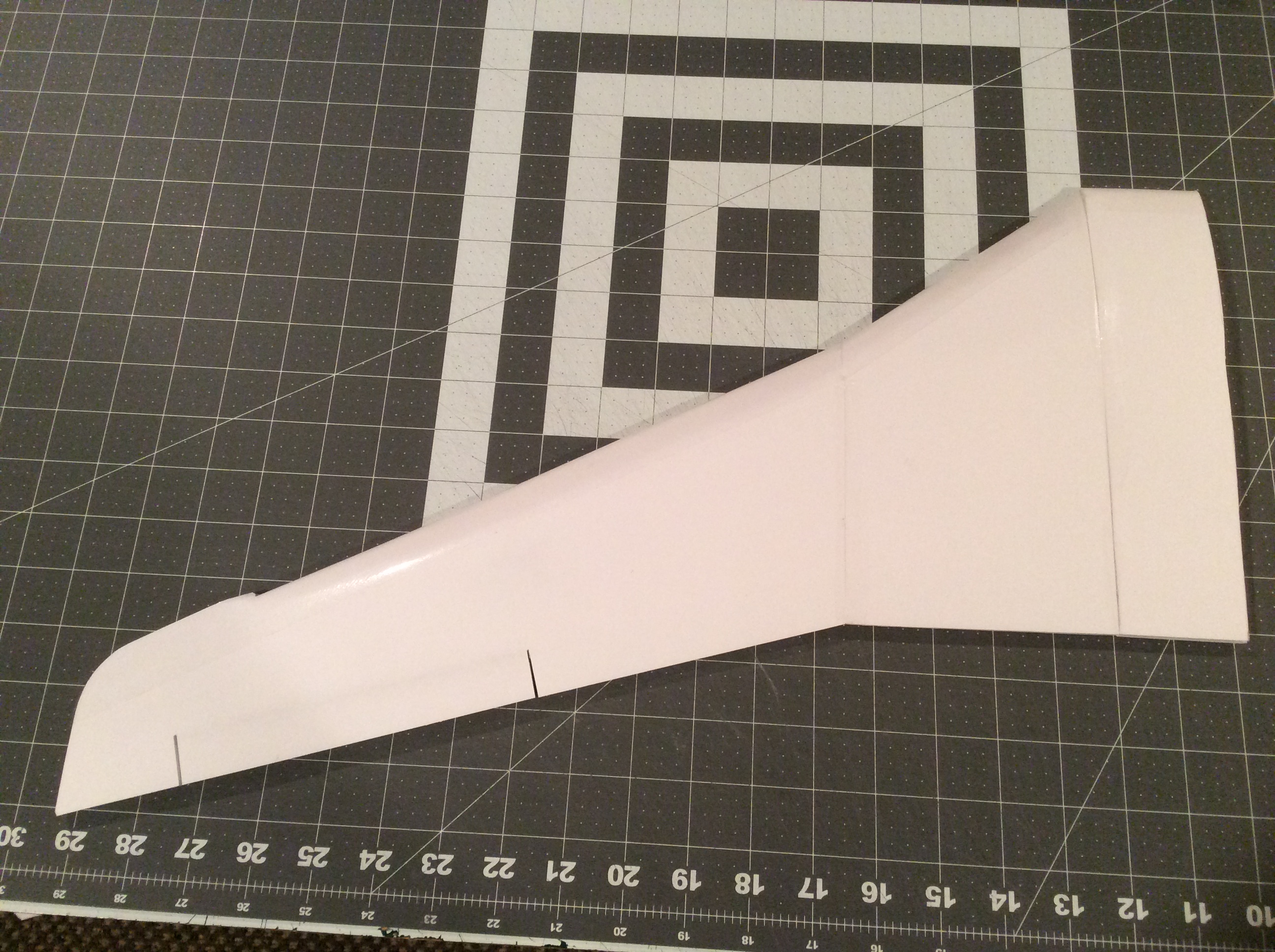 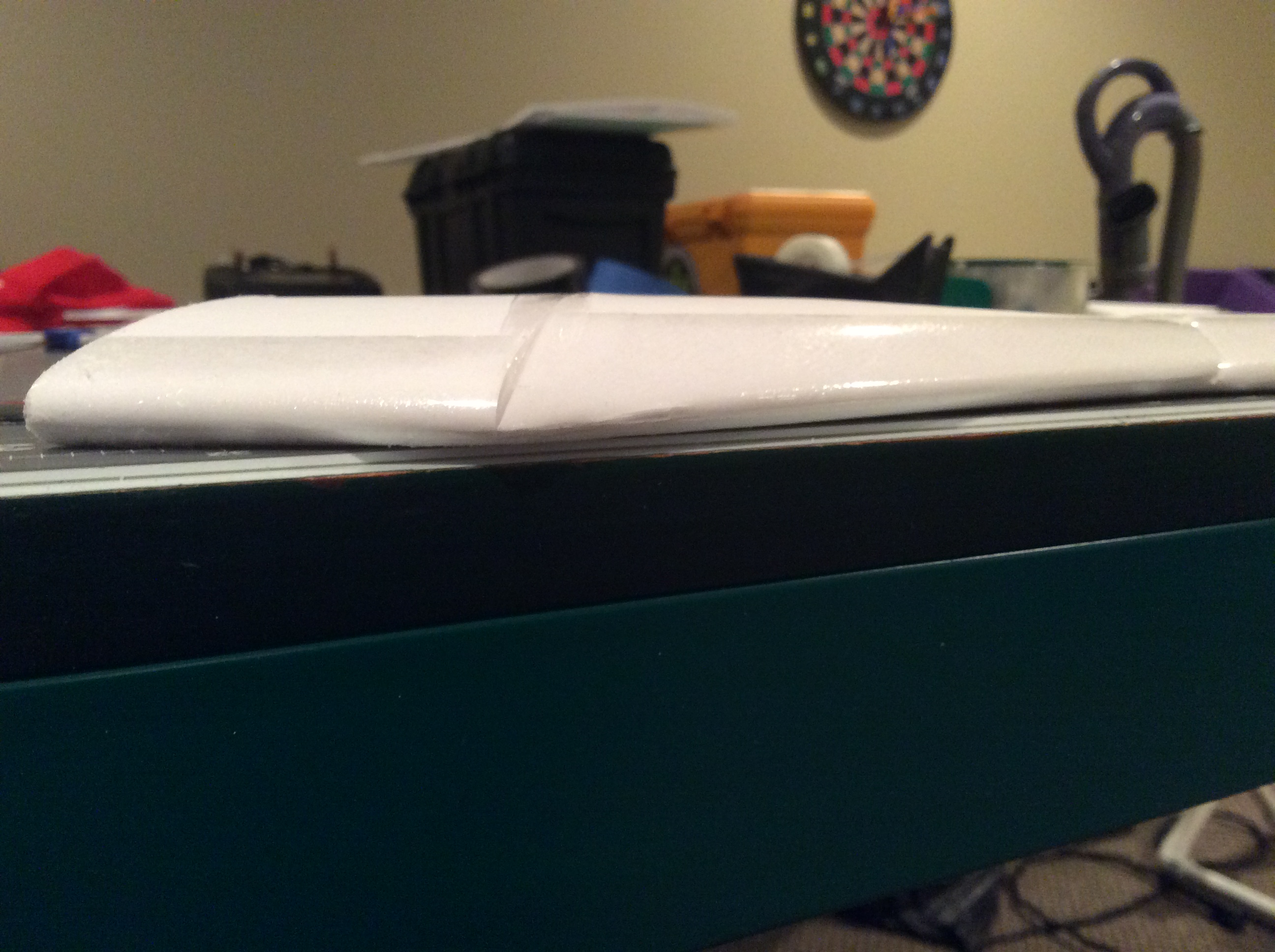 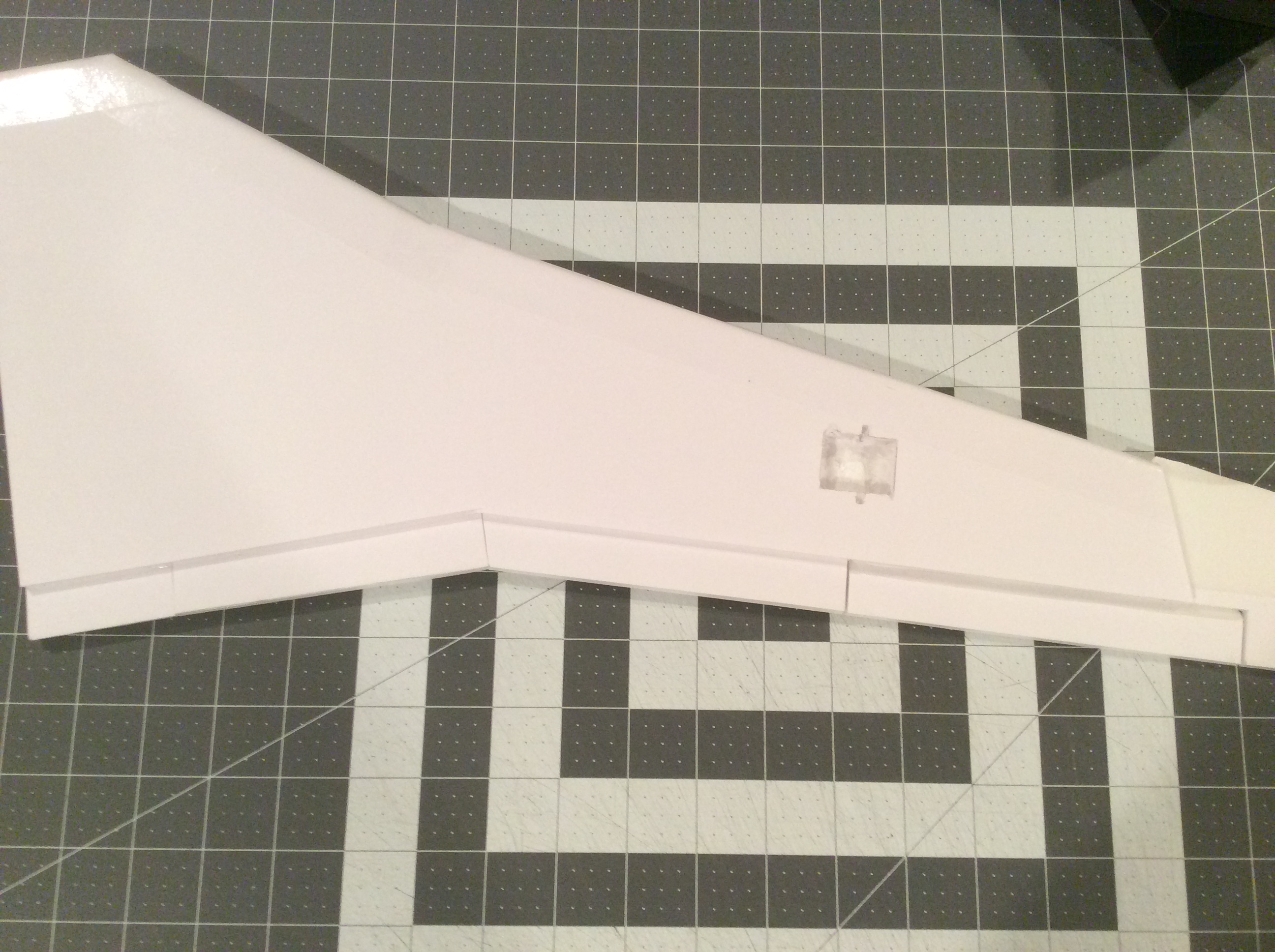 #8
I also don't know anything about aerodynamics, but that looks really sweet. What's the seat pitch going to be in your cabin? Probably even tighter than United Airlines I reckon.

#9
Very cool, will be watching!

#10
Nacelle test build. Definitely need to build some formers to get the shape right but I like how it came out. Problem though is not enough room for the esc and a standard size mini power pod. Not enough room in the wing for the esc and no air flow so I may either build the pod a little bigger or do a smaller pod. 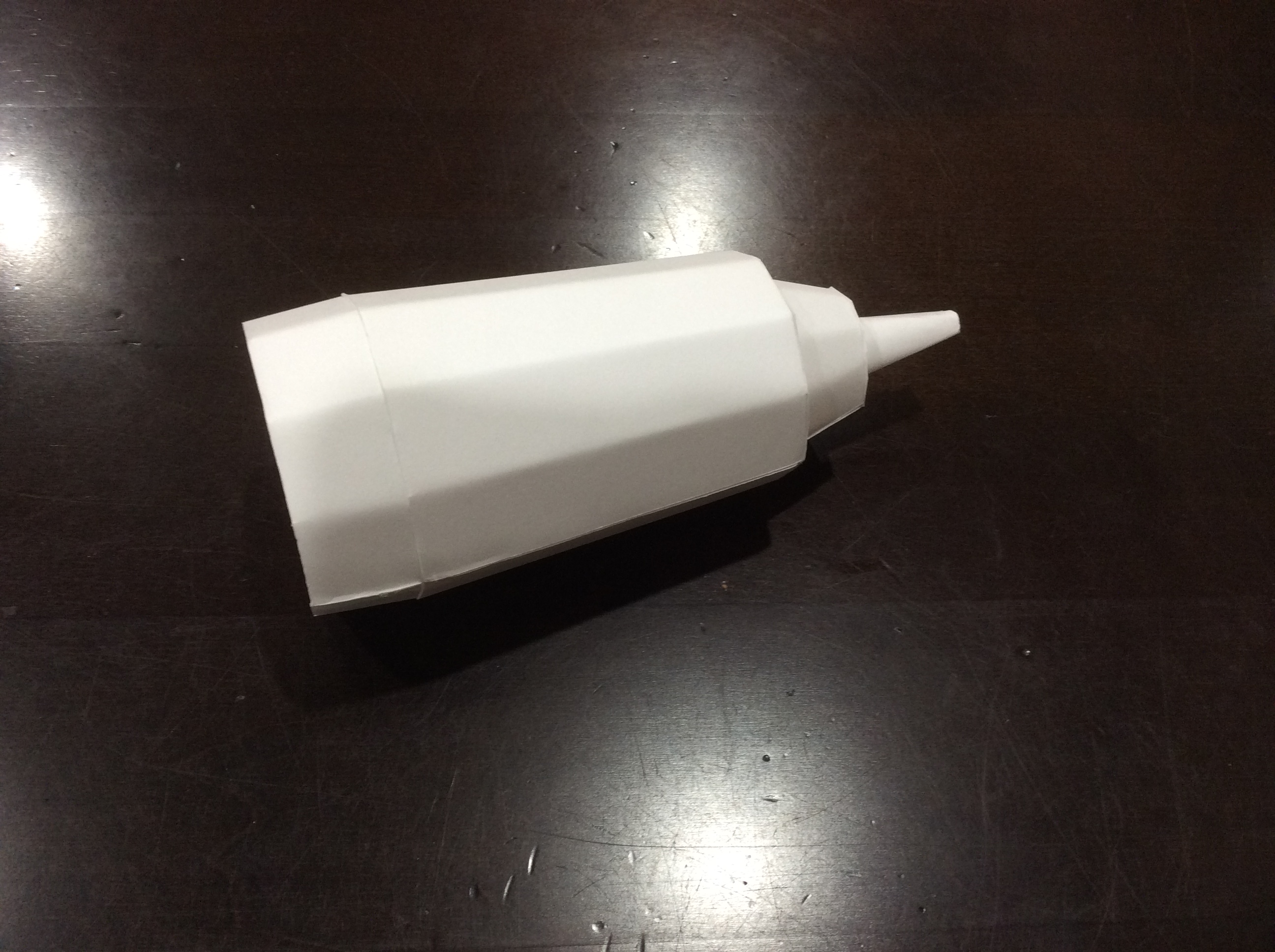 #11
jpot1 said:
Nacelle test build. Definitely need to build some formers to get the shape right but I like how it came out. Problem though is not enough room for the esc and a standard size mini power pod. Not enough room in the wing for the esc and no air flow so I may either build the pod a little bigger or do a smaller pod.

View attachment 132188
Click to expand...
Why not do a custom pod or make it unswappable?

#12
Rear fuse dry fit test. Things coming together nicely. The size is hitting me, larger than I realized. But it’s super lite with the score cut gorilla glue method. Going to cut in the removable wing tomorrow. 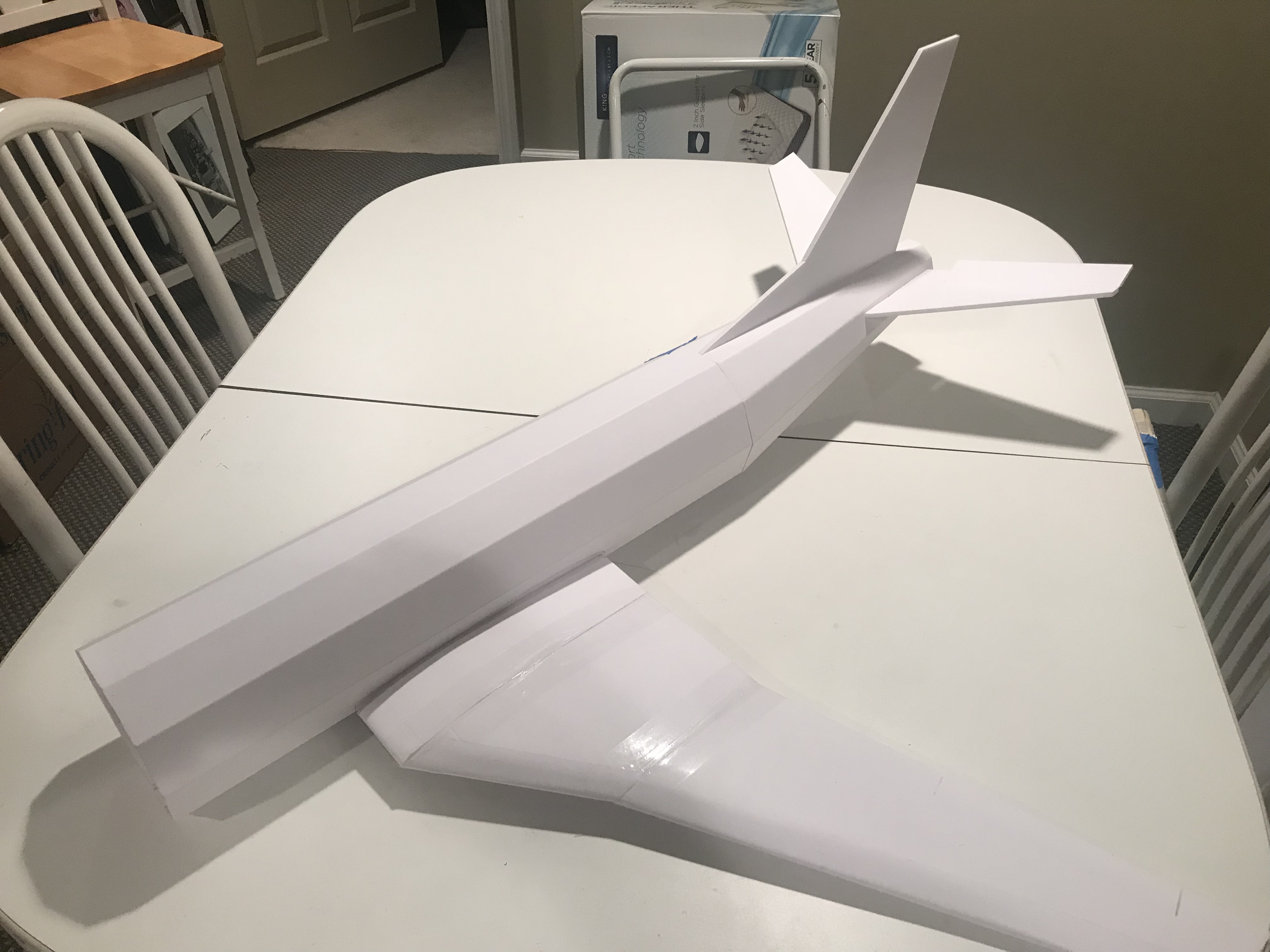 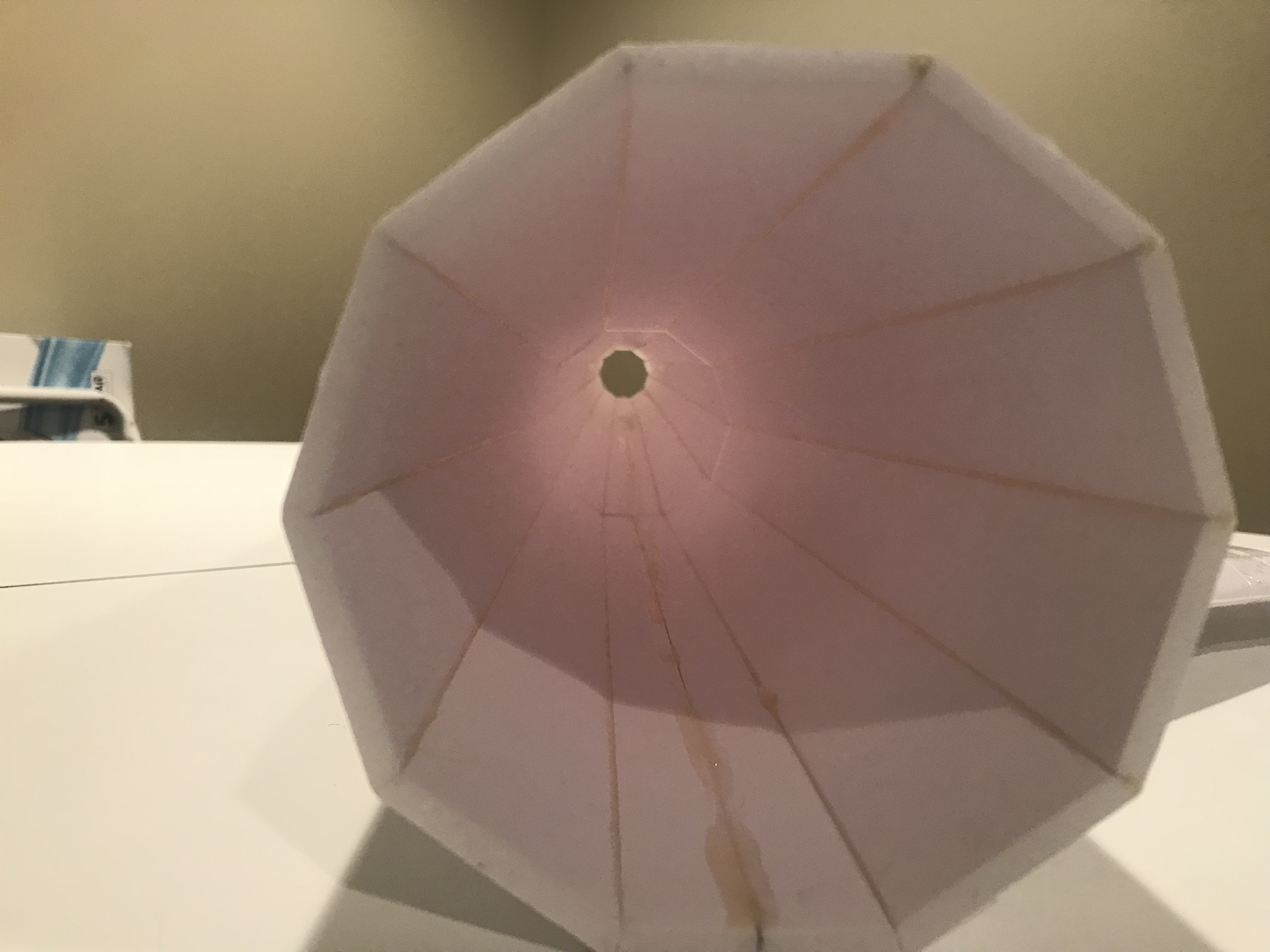 #15
Do the aileron servo cutouts fit the standard blue 9g servos? I only have 2 6 grams and I really don't have any desire to buy more 5g ones and pay twice the price for them.

#16
whackflyer said:
Do the aileron servo cutouts fit the standard blue 9g servos? I only have 2 6 grams and I really don't have any desire to buy more 5g ones and pay twice the price for them.
Click to expand...
I just placed the servo drew around and cut it out. I’m using 5g but 9g would be fine.

#17
Skipped the power pod and managed to get everything (including esc) stuffed inside the nacelle and happy with the wing mounting piece. Now to build the other half. 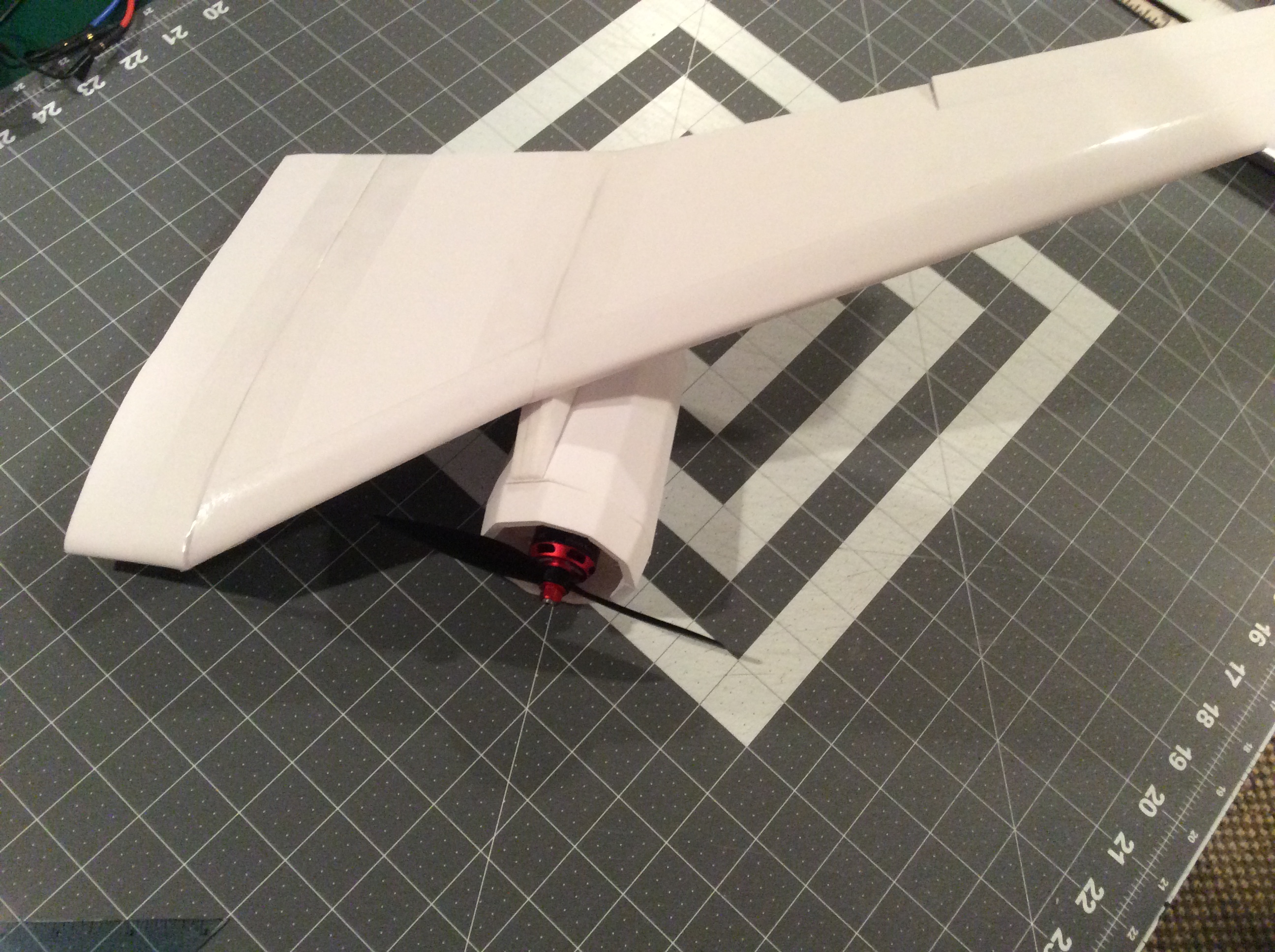 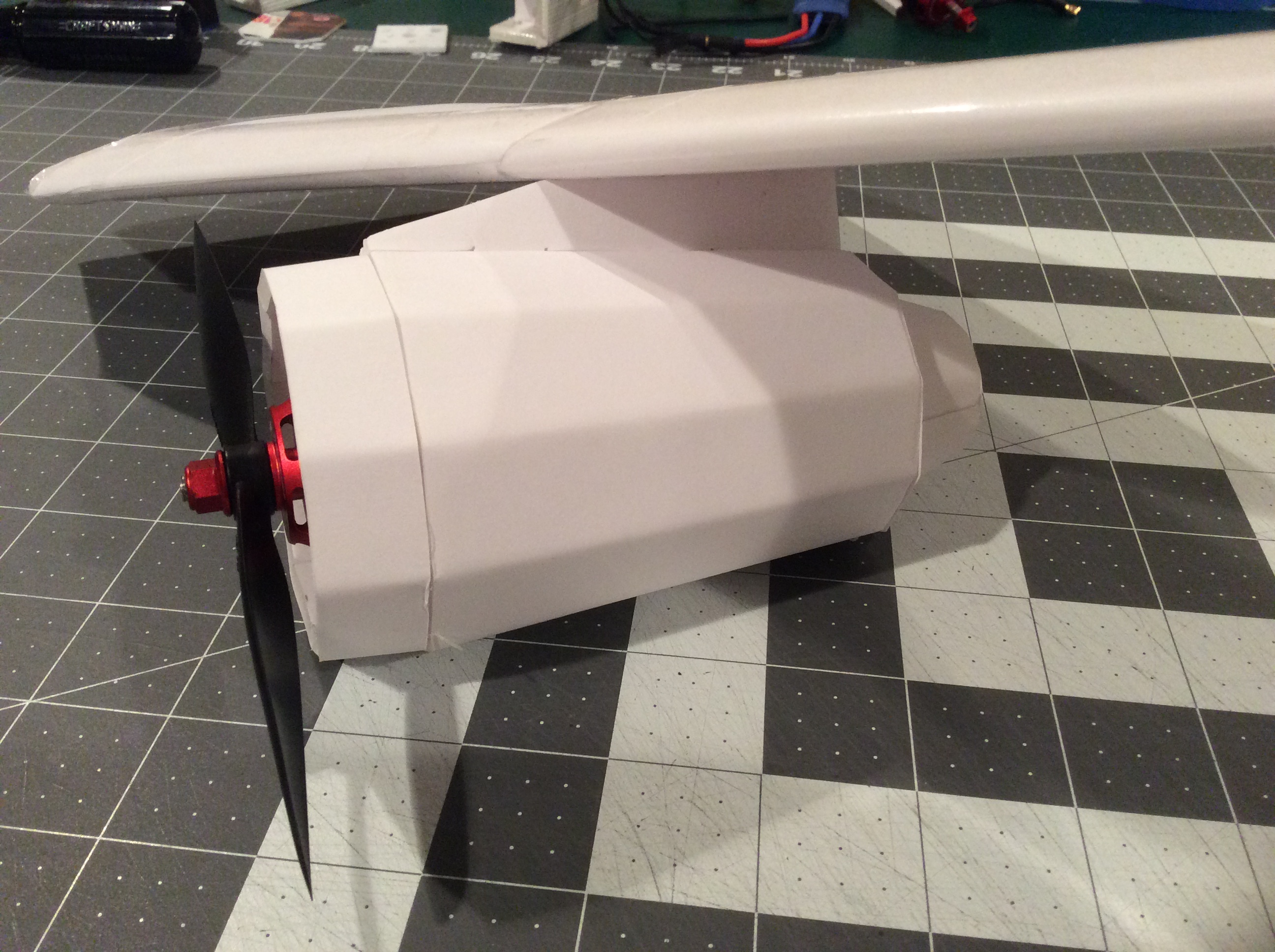