The FT Tiny Trainer is a Mighty Mini that is specifically designed to cover all the basics when it comes to RC Flight. 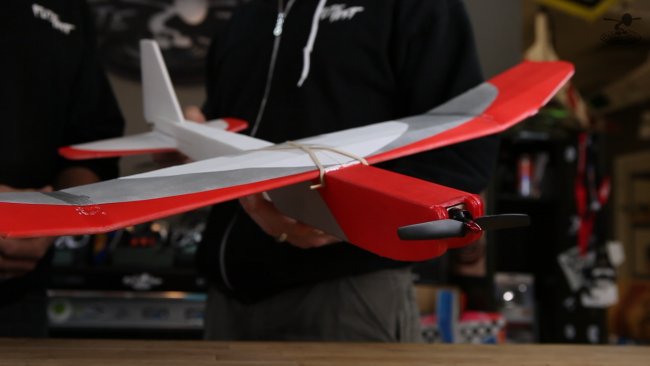 This plane can be built and converted into 4 different designs that will guide you through every level of getting started flying. 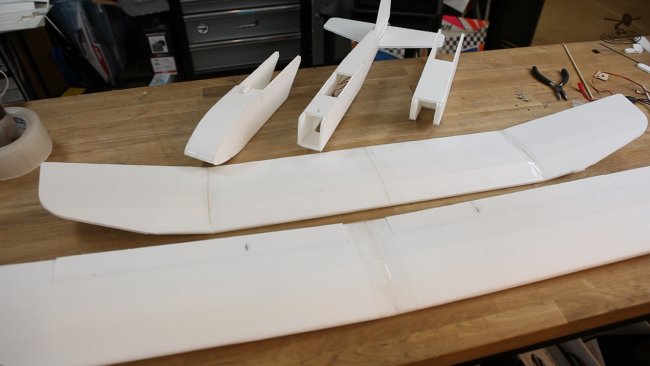 Educators, group leaders, and parents looking to make a memory with a loved one can build the Tiny Trainer as a free flight (hand tossed) glider or a powered RC airplane. 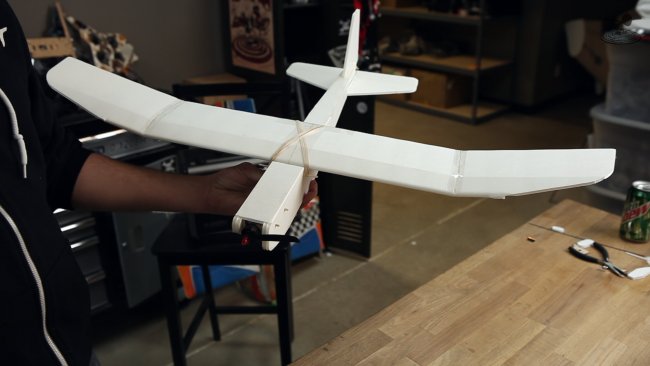 Whether you are a beginner yourself, or if you are trying to bring a newcomer into this wonderful hobby, the Tiny Trainer will assist them in making every flight a great experience! 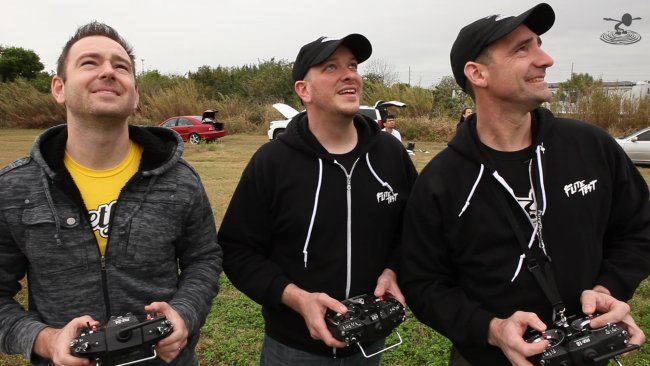 We had a chance to meet up with the guys from GetFPV.com and Andy joined us for some fun flying in the windy Florida weather. 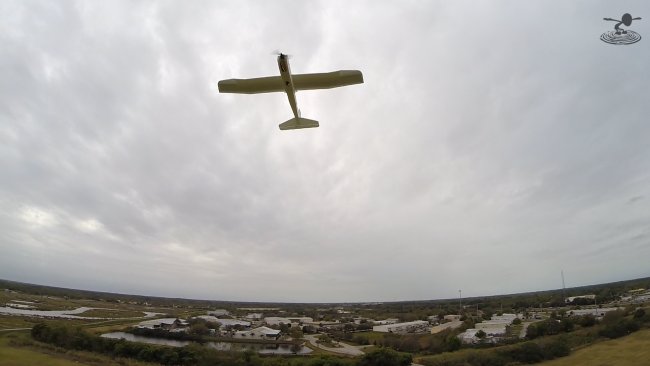 We had 2 airplanes setup as "trainers" and Eric was flying the 3-cell, 4 channel sport wing setup. 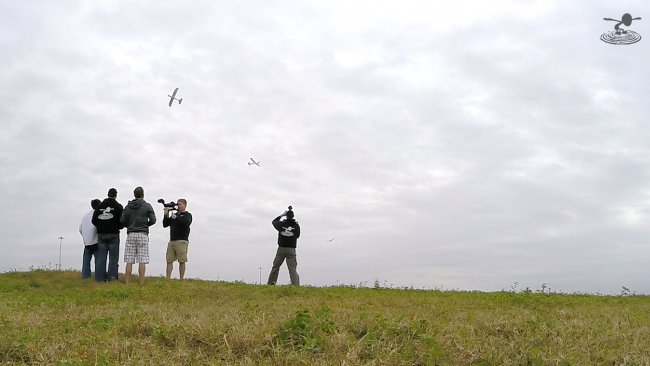 Changing the battery from a 2-cell to 3-cell will give you a completely different flying experience. 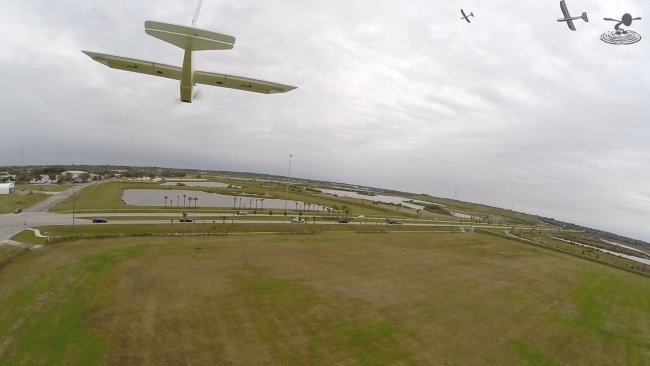 The whole goal of this airplane is to give you the options to step through all of the levels of flying. 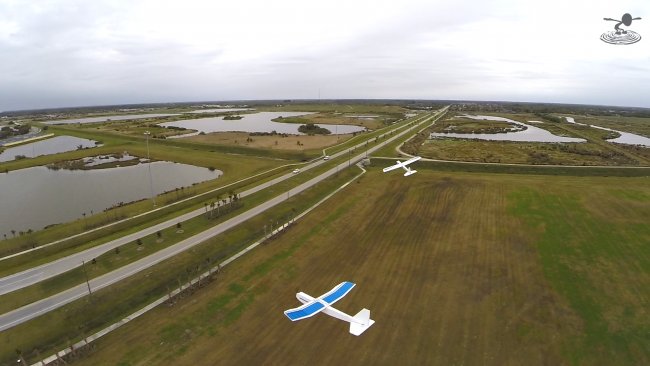 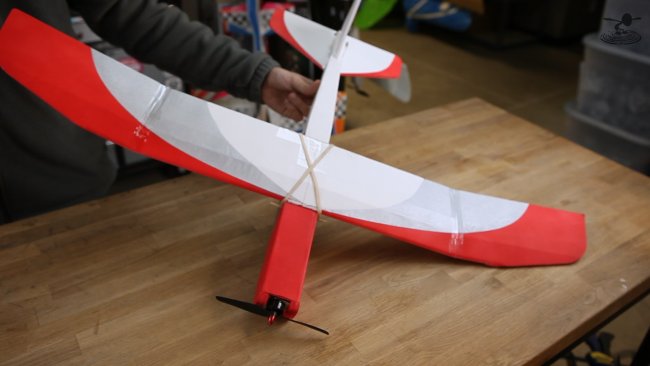 These are part of our Mighty Minis Series and are powered with our Power Pack A (Minis) electronics setup. 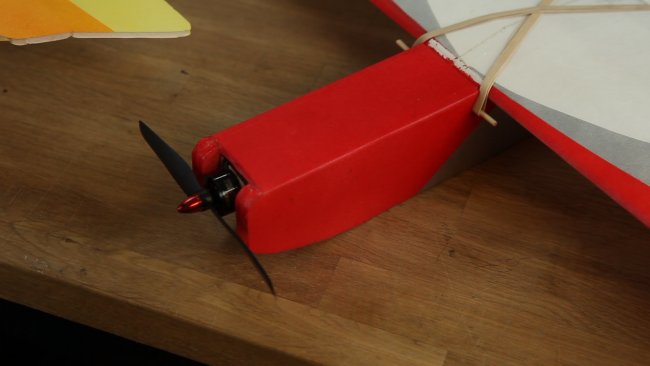 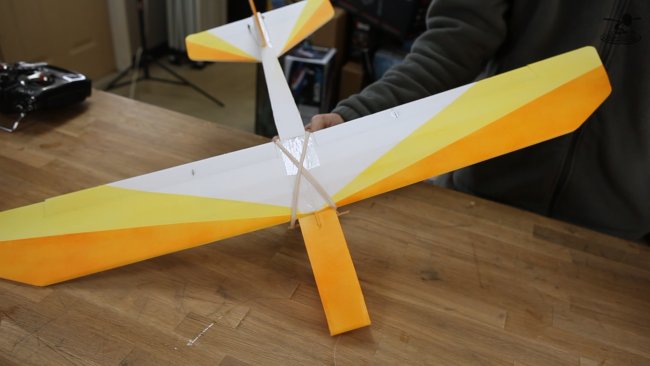 This setup shows the glider nose with the sport wing. Here is the polyhedral wing with the swappable power pod setup. 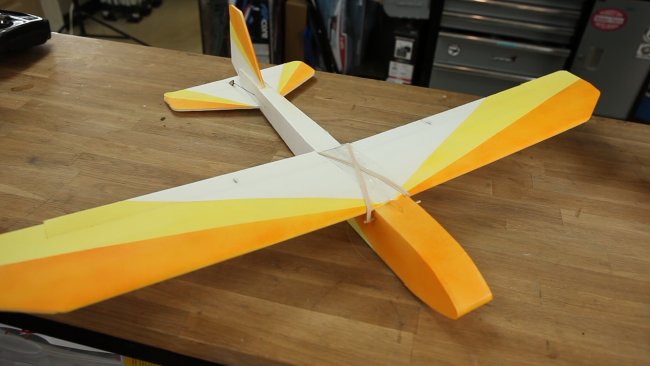 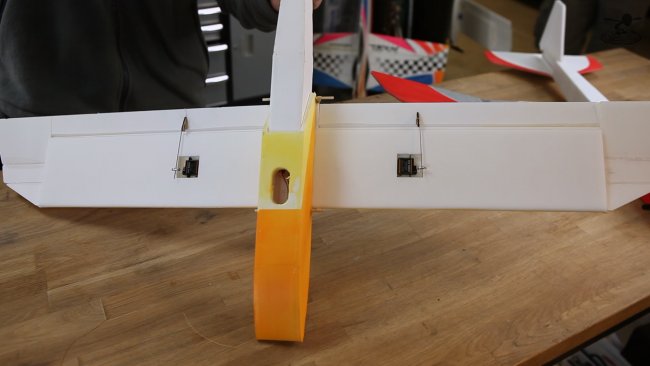 This speed build kit will teach you how to build and setup the basic layouts of all of the Flite Test kits! 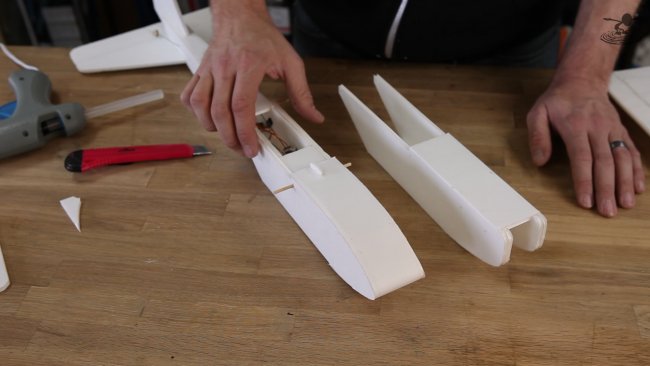 Swap out your glider nose for the powered nose and enter into the world of 3 channel flight. 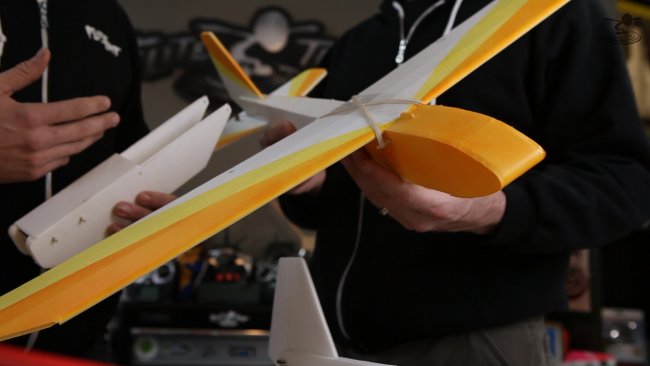 A little clay in the nose for balance, and your ready to toss the plane back in forth with a friend! Remove the clay and add 2 servos and you have a great 2 channel glider to learn elevator and rudder control. Chuck gliders are great fun for kids and group events. We were excited to see how much fun the kids had and to see how sturdy these airframes are! 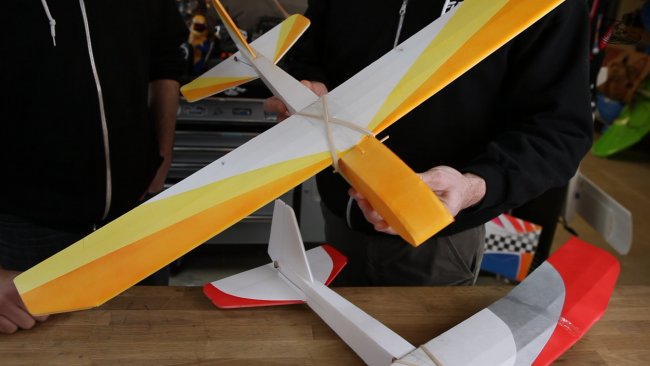 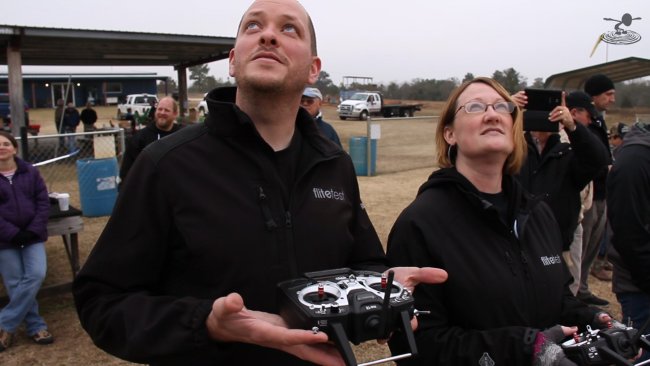 Flying with the wireless buddy box setup on the Graupner MZ-24 12 Channel Transmitter allowed us to pass the transmitter while we visited Crafty Dan's flying field. Everyone enjoyed flying the FT Trainer and it was fun to watch some new pilots give it a try. 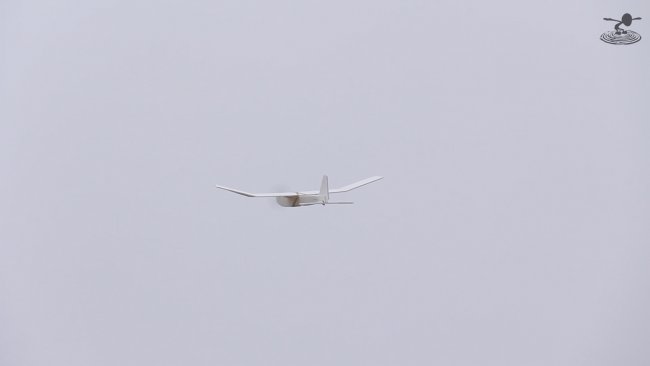 Thanks again for all of your support and feedback. We can't wait to see what you do with your FT Tiny Trainer! Please share your experiences with articles, videos and comments!

Stay tuned for the build video and plans!

Staff member
Admin
Moderator
Mentor
#2
This is an instant winner! Looks like a really well thought out, great flying plane.

I always do a big "craft" project for an annual camping trip we do with about 20 kids. I think we'll be building some Tiny Trainer chuck gliders this year!

#4
Can't wait to build some versions of this plane! As a beginner, I'm looking forward to what certain changes in the design, battery size, etc... make on a plane. Thanks FT!

Staff member
Admin
Moderator
Mentor
#5
I might actually be able to get my girls to start flying with this one.

Mentor
#6
Sweet! That thing will teach lots of people to fly.
A

Admin
#8
There is a very excited 9 year waiting for me to build this with him!
K

#9
Gotta build 3 of these! Two for my buys to throw around while I fly an RC version. Then when they are ready to start flying I can convert the glider (if it's still in one peice) to RC.

Staff member
Moderator
Mentor
#10
Konkilr said:
Gotta build 3 of these! Two for my buys to throw around while I fly an RC version. Then when they are ready to start flying I can convert the glider (if it's still in one peice) to RC.

Jake
Click to expand...
Ha! You think you're gonna stop at 3

You might want to buy one just to use as a template.
C

You might want to buy one just to use as a template.
Click to expand...
Well deserved +1! I have 2 years old daughter who loves to throw things in the air, and 4 years old son who is already asking me for "trips to the field with little planes" and tries to steal my transmitter

On the other hand: can anyone explain to me (again) why we have to wait full two/three days for the plans? There are a lot of builders who follow FliteTest for very long time, and they don't need build video to put the plane (especially as simple as this one) togehter correctly. Having not more than an hour per day to build, two days may be not enough to have one ready before weekend. With the weather as bad as we had for the last two months, that may end in wasting the only weekend with acceptable conditions in months for building rather than flying...

Staff member
Moderator
Mentor
#13
In general, it's just the tradition. I've nudged them about it MANY times, and there's one solid reason to hold to the tradition . . . time.

More often than not, they're up to the wire with everything that *must* be done for the release, up to the last moment (ever notice that the teaser videos tend to post late?). Converting the FINAL version of laser-cut layouts to colored plans is typically the last thing that is done. We've nudged them in past to "crowd source" the final edit so we can help catch things like a missing canopy or inefficient layouts . . . They've been appreciative of the offers, but again, more often than not, they're just running out of time and the final version isn't done in time for even that.

They could stretch the release to give them more time . . . or we could get the airframe and plans sooner.

I'm kinda glad they do the latter.
N

Driftin' with the wind...

#15
Oh, man! I'm building one! The 4 channel sport version looks like a great candidate for a pylon racer. Now, where do I find a cliff in North Idaho that is NOT over a large body of water.:black_eyed:

#16
I'll build one for friends to try, my last trainer wasn't that good

then I'll build a 4 ch version for me

#17
Gonna build a glider version, with tow release, and attempt some towed starts with the Mini Guinea!

#18
I had a lot of fun flying one of the prototypes when FT was down here in Georgia. It was nicely aerobatic and very stable and relaxing. Glide is good for a small foamy. It didn't like wet weather one bit though.

Josh left me with a speed build kit that I have yet to build. But I did use it for templates for a balsa version. On a 3s 370, mine is an absolute bullet--it's nearly out of sight after 25 seconds at full throttle. Bottom line, the design has a lot of potential; FT did a great job on it.

Simple, yet elegant. With loads of room for future modifications. Yet another to add to my ever ending list of planes to build.....

Mentor
#20
I can think of something to do with this...