#1
I have been watching the minis series and I noticed that they use a JST connector for the battery leads. I need to make an adapter. What is the standard, JST male on battery or JST Female on the battery?

I hate to say it, I've seen vendors quote it both ways

Most common is male = battery . . . which also is the one that has female contacts. No respect for the gender of electrons

Overall lesson . . . don't buy without a good pic from the vendor.

Mentor
#3
With all power connectors think "the exposed metal points to the power" - similar to a wall socket and tea pot cord. This is the safest to prevent shorts. 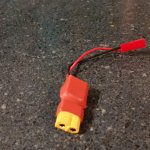 I use one of these
http://www.hobbyking.com/hobbyking/...male_in_line_power_adapter_AR_Warehouse_.html
Last edited: Nov 24, 2015
P

Generally, connectors are sexed by they electrical connection. This is the only convention that makes any sense because that is the important thing to know.

However for some reason the little red JST RCY (aka BEC) connectors seem to be referred to by the sex of their sheathing. So the batteries with these connectors have "male" connectors and "female" adapters even though the electrically female socket, the one with the holes, is the one on the battery (or should be).

Hobby kink at least is consistent about putting the electrically female connectors on their batteries at least as far as what is pictures and what I have received but they call the XT60 female and the red JST RCY "male" even though its really electrically female.

I was perplexed by this and looked around and it seems that this cross-dressing is the norm for the Red JST RCY connectors at least in RC circles. Go figure.
T

It is based on the housing not the pins..the xt60 battery connector goes into the esc connector so it is considered male
D

#7
I know I am goping to catch a ton of flack for this but WS Deans plugs are very easy to tell the male from the female.
P

#8
Tim Brown said:
It is based on the housing not the pins

Only for the JST RCY connector in RC circles...

I have no idea why they put a female (ie electrically male) JST RCY connector on that adapter for a BEC. It should be electrically female. Anything you should plug into it should have pins not sockets... So it's a badly made adapter imo...an example of why it is a bad idea to sex a connector by it sheath and not its electrical connection since whoever made it was confused.

If you look at the BEC HK sell they either have no power connector or if they have JST RCY connectors, they are female (ie electrically male) and won't work with that adapter.
http://www.hobbyking.com/hobbyking/...3_Function_Switch_w_UBEC_Voltage_Display.html
http://www.hobbyking.com/hobbyking/store/__24579__Turnigy_5V_6V_5A_Heli_UBEC_for_Lipoly_6_16V_.html

and its not just HK. Here are some other random examples
http://www.tmart.com/12V-3A-Mini-Sw...rice=hk_intl&gclid=CPOoquKMr8kCFSgVfgodzLkF4Q
http://www.futabarc.com/accessories/futm0961.html
Click to expand...
T