#1
I really love simple builds and the possibilities of Retro Flying Wing designs. In the past I have done a few conversions with a degree of success. Actually my favorite plane to chuck in the air is such a retro design.

Anyway I like the simplicity of the "Bloody Baron" but each one I built was too heavy and they did not like a large power plant! Needless to say I still build them occasionally but until I obtain a much lighter FB the original design is just beyond my reach and abilities.

Enough preamble! For my entry I have chosen the "LITTLE BIT 28in" which resembles the "Bloody Baron" BUT it is actually a retro design flying wing! My intention is to design it so that it can take the powerpod from a TT and give a totally new and thrilling flight experience for those who have graduated from being a Newbie to a novice pilot.

Here is the Balsa Original; 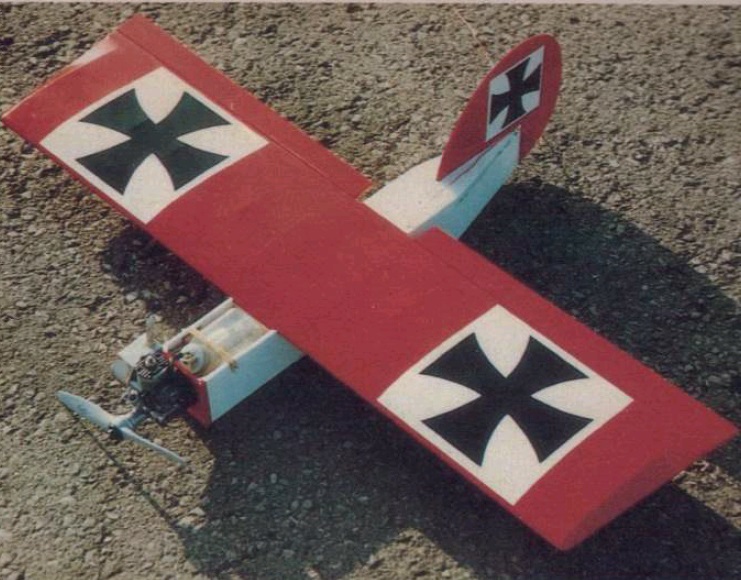 As I will not be attending Flight Fest if any attendees want to build one to take with them please feel free and even ask questions to help them get their version flying!

#3
Design notes/Ideas: Wow I did not realize how many options I have on such a simple bird!
I can make the wings in a plethora of ways and the wing tips can similarly be made a number of ways.
The fuselage whilst quite simple, (basically a rectangular box with a taper at one end), there is the planning of the positioning of the electrics that has so many possibilities!
Then there is the scale! The plans have no included scale/legend and the 2 copies I have of the plans vary slightly in scale so I must pick my own scale or at least guess what the original sizes were.
Finally there is the plans to be drawn and published! I normally use A1 or A0 sized plans but this may cause problems with some forum members. I may attempt my first SHEET sized plan, 20" x 30".
The detailed design work will commence shortly, once I have my ideas whittled down in number and it will start out as a paper and pencil design for the prototype with the electronic plans being drawn up when I am satisfied with the design and its performance. This MIGHT require a range of prototypes and layouts!

Mentor
#4
Welcome to the challenge!

#5
Welcome @Hai-Lee. What was the original fuse built from? looks like chloroplast

Mentor
#6
She is a balsa design, but you're right that it could be easily adapted for coroplast! The other picture on the Outerzone site is a fun color scheme too! #7
FoamyDM said:
Welcome @Hai-Lee. What was the original fuse built from? looks like chloroplast
Click to expand...
@rockyboy has already given the answer but further to the plane there was actually 2 designs in the same series and this was the largest! The other called "Tiny Bit" is even smaller but due to the weight of the local FB I was unsure that I could do the design justice.

Both are Balsa designs, (including built up wing construction!

#8
Design progressing. It is actually bigger than I thought! My first fuselage suffered from a newbie error, I folded it the wrong way and ended up with LEFT thrust angle. So I will need to dig through my props and find a CW prop to suit!.

As I need to build one with right thrust I decided to do a symmetrical KFM wing version as well, (it will use the left thrust fuselage). I did a rough calc and the KFM wing will have slightly less lift and be a little heavier, BUT it will be much easier to build and a little more robust!

I will fly both versions before I post any pics or plans.

#9
Just a little progress on the prototype/s

2 fuselages awaiting the paint and fitting out!

The KFM wing showing spar fitment. When the glue is properly set the laminations will be glued into place and of course the paint will be applied and then the wing will be fitted out also.

#10
Just a bit of an update on the KFM Winged version!

The wing, (not fully finished), checked for fit!

The wing saddle cut into the fuselage!

#11
talk about easy an durable!

#12
FoamyDM said:
talk about easy an durable!
Click to expand...
Actually if you look at the latest releases the idea of robust construction seems to have been lost! I like the idea of good performance not only in the air but also in the ability to fly more than once between rebuilds!

There will be a more accurate design to suit the original plans but a robust model can still be easily made without too much loss of performance or flight experience!

MUCH more to come!

#13
Just added some colour prior to fitting it out!

May get to test fly it this coming weekend.

#14
Very nice, I love the KFM option and simplicity of the design. Definitely interested to see how this turns out, should fly great!

#15
It has been a while since I have been able to return to this project but here is a little progress on the KFM version.

Here is the wing fitted out with its servos and Receiver, (mounted to the wing). Mounting the Rx on the wing means I only need to plug in the ESC plug to reunite the wing and fuselage.

The Motor, ESC, and battery mount in the fuselage, (pic later).

As the fuselage is a hollow box it opens up a great number of motor and battery combinations!

#17
The KFM version is ready to maiden.

#18
I already have a spare fuselage, (the left thrust mistake build), so I will build this one using a CW motor setup.

Cut out the wing panel. Removed the internal paper and cleared the spar locator slots. Curved the wing panels, (as per Master series), and cut the aileron hinge line as well as freeing up the tip formers! The TE of the under panel has a broad bevel so that the TE is paper only and when fitted against the upper panel there is no gap and a smooth transition to the ailerons/elevons!

Cut out the keyed spar and the front and rear sub-spars. The sub-spars have all of their paper removed!

Spar and sub-spars keyed in and glued!

Wing tip formers glued into position and the wing test fitted to the fuselage after the wing lower profile is cut into each side of the fuselage!

Not sure how I will proceed with the wing tips but that is for later!

#19
Well the paint is currently frying on the wing but I did try something totally different, (for me anyway). To cover the wing tips and give the nice compound curves I grabbed a bit of clear self adhesive book covering plastic and noticed that it stretched a little under tension. So I cut a couple of pieces and stretched them over the wing tips! It may not be perfect but it is quite good and looks the part!

#20
Hai-Lee said:
I grabbed a bit of clear self adhesive book covering plastic and noticed that it stretched a little under tension. So I cut a couple of pieces and stretched them over the wing tips!
Click to expand...
That's an interesting solution. Can't wait to see the result. Another forum member, BobK, perfected a similar idea using dollar store cellophane gift wrap and aerosol adhesive. Using a heat gun you can stretch it over compound curves. Plus it comes in colors.