#1
I can't make it to Flitefest 2022, nor do I have the means to build 1/6th scale, but it's been too long since I've built anything so I'm joining anyway. Or 'Half joining' if you will; I will be building a 1/12th scale Albatross D.Va and flying it from the other end of the Atlantic ocean.

I plan to build a 30 inch wingspan bipe, fitted with a 30amp ESC, running a 1000Kv motor, swinging a 9 inch prop. All bits that I already have. It's a modest power system for a plane of this size, but it's carried a 900g bipe through the air before and WWI wasn't a time known for 'going vertical'. So, if I build it well (and don't end up approaching a Kilo again) it should be nice and capable in the air, just like the real Albatross was, for its time.

I have no printer at the moment, so this will be somewhat new territory for me. Not like my simple planes born of a ruler and my imagination but not like my rigorously designed planes either. So I will be working with plans that cannot be replicated at the click of a button.

I may not have a printer, but the initial measuring process is the same as designing printed plans for me: I first need to know how big everything's going to need to be. I downloaded a blue print of the plane and pulled it into Adobe illustrator. In Illustrator I draw a circle 9 inches in diameter - that's my prop - then scale the blueprint down to it. I draw a line around the outer edge, then stick 6mm lines around it pointing inwards. 6mm is the thickness of my foam. I then draw another perimeter line within that - that's the space I will have inside the fuselage.

The blue print usefully comes with cross-section samples. I trace those samples and again, use the 6mm spacer lines to see what shape my internal bulkheads need to be. I can then copy and re-scale them to set the structure that I want. Illustrator's 'Document info' feature retrieves the circumference of the shapes, telling me the approximate shape of the bulkhead on the inner perimeter and how long the skin pieces will need to be from the outer perimeter. 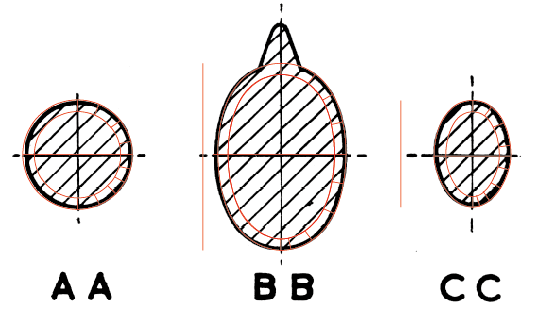 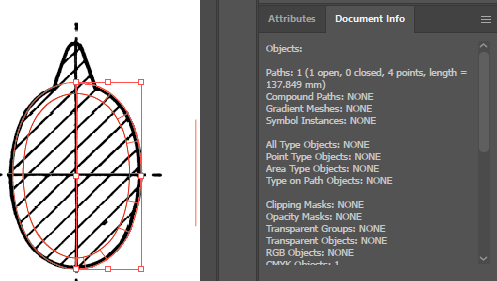 This is usually the point skin shapes would be drawn up in illustrator to form plans, but for this build, the most vital thing I can get from Adobe Illustrator is numbers: 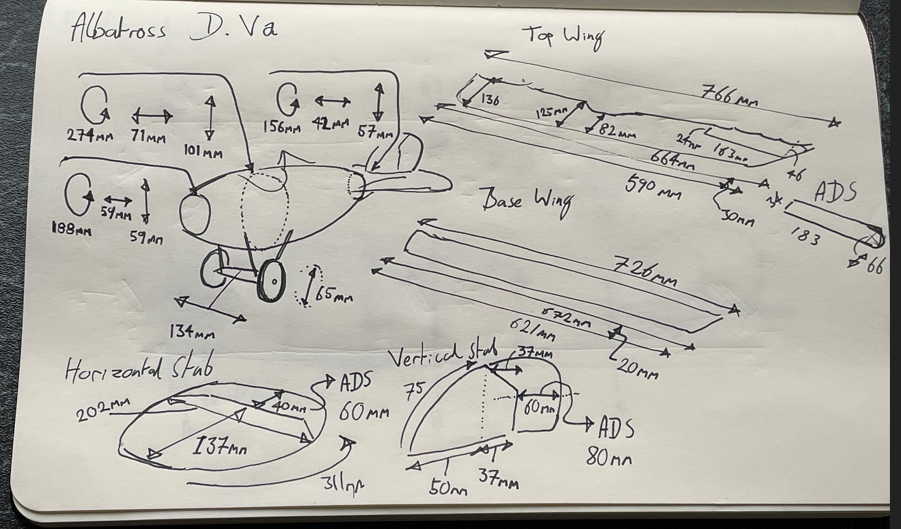 The label; 'ADS' stands for; 'Air Doesn't Scale'. You can see I'm planning to give every control surface an extra 20mm. Roughly 30% increase for the ailerons and elevator and a roughly 20% increase on the rudder. I'll figure out how much this extra foam adds to the trailing control surface or eats into the plane when it comes to building, but a 10mm increase on each side will likely be the best approach. 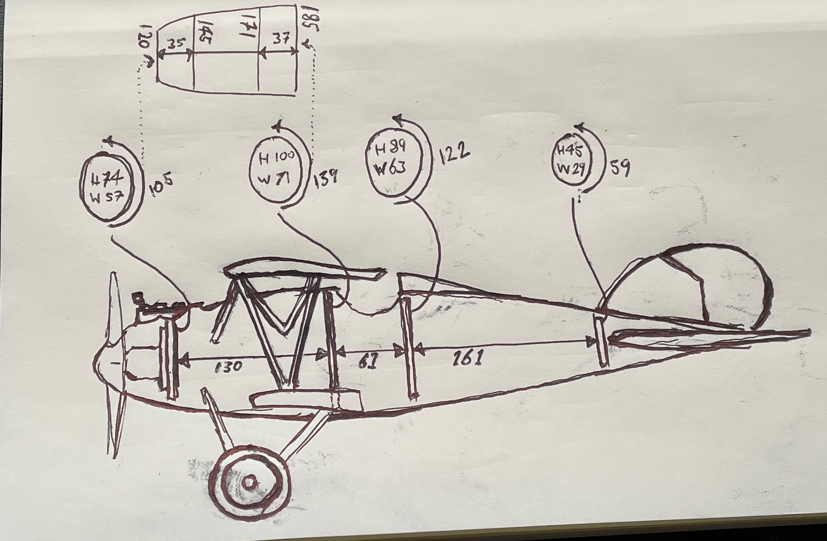 That extra piece drawn above the fuselage is going to be an insert sitting between the firewall mount and the bulkhead just ahead of the canopy. Its top will level off where the cabane struts go in, providing a nice shelf. It will also serve well as a base for a removable bonnet to go in. I plan to make the bonnet and engine model one big removable piece to access the ESC, BEC and battery tray.

As well as measuring from blueprints I also gathered some reference pictures. As mentioned in the main thread, Rise of Flight is a free WWI Flight sim where you buy planes individually. But it comes with three free planes, one of which is the D.Va! So I may as well make the use of an existing 3D model that I can pan around and capture any angle I want.

I first took snaps of the control surfaces at full throw to get an idea of the deflection angles, but again; Air Doesn't Scale, so I will most likely be allowing it more throw than the real one supposedly had. More headroom is always preferable. The screenshots from the game serve a much greater purpose as a 'mood sheet' and also showing me the curves in ways a blueprint cannot, not to mention revealing those smaller details that are always lost in low-res plans: 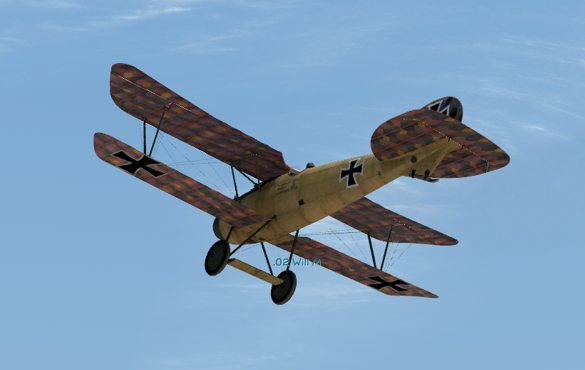 For a game made in 2008, the graphics are truly fantastic. The fact this model is just out there for free is really quite a gift! I've got some good reference photos for the engine as well. I will be crafting that part free hand, likely by cutting up straws and coffee stirers.

With all these observations made, it's time to start drawing up some paper templates and getting these shapes out into the physical world.
Last edited: Feb 5, 2022

I started with the fuselage bulkheads, using a ruler to draw out their width and height, then measuring half of their circumference along a piece of string to suss out where the outline should go. 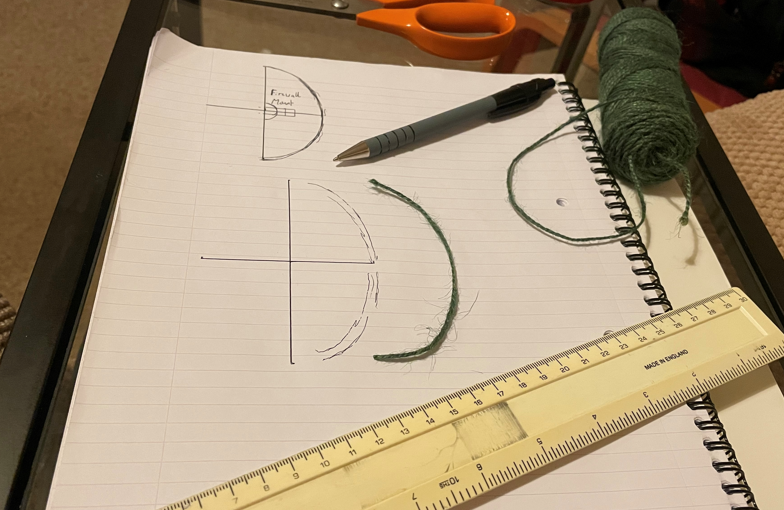 I only need to map out half of the shape. I take the paper and fold it in half before cutting to ensure they come out nice and symetrical: 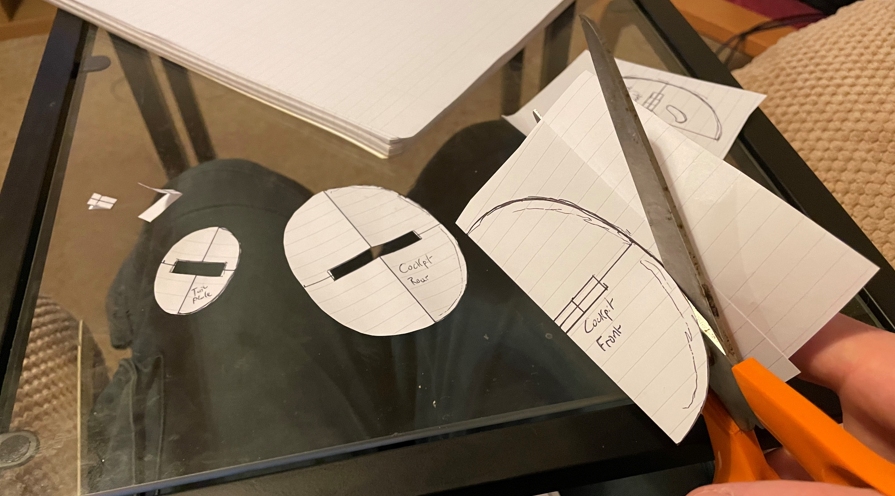 The next evening I mapped out the top wing and used the same fold and cut technique to get it symmetrical. I unfolded it and.. 'Wow... Is that how big it's going to be?' 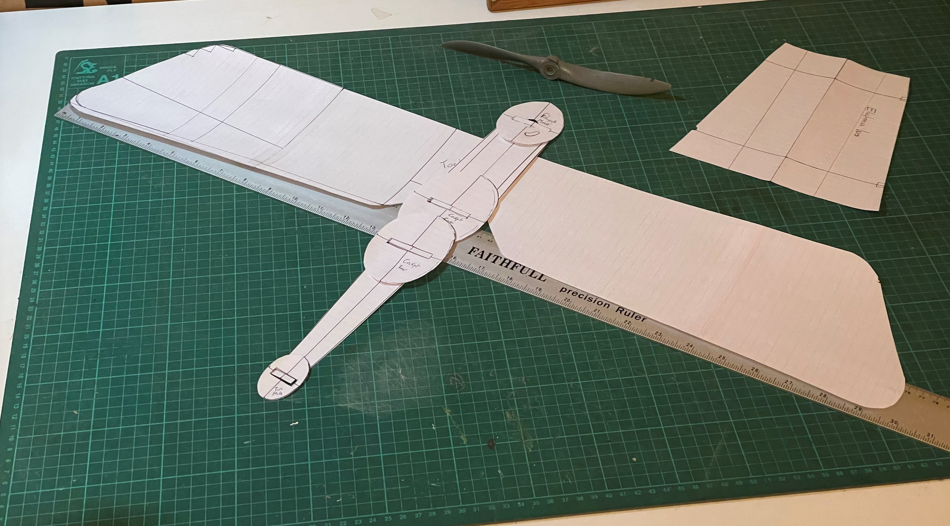 It's a 30 inch wing. That is exact to the design and I observed what 30 inches looked like on a tape measure first, but now that the plane's profile is coming into view, it's simply not as big as I imagined. Not that there's anything wrong with a 30 inch Albatross, if anything it's probably better for my current living situation but... I already have two Biplanes this size! 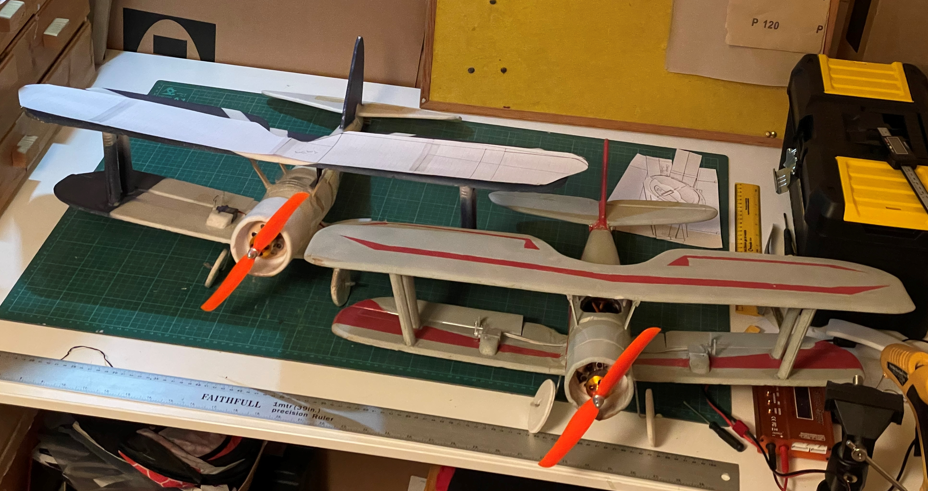 So, back to the blueprints. I shopped online for a 12x5 prop (I wanted low pitch so a 1000k motor will be okay with it) and found a nice wooden one for gas planes. I scaled my existing plans up - adjusting an existing plan takes much less time than drawing one up for the first time - and gathered my measurements. This version will have a 39 inch wing span. That's a bit better. Then plans are now showing a lot more space around the motor and better yet; my camera will now sit in the cockpit:

I found when drawing out the plans I spent a lot more time with Illustrator open than I thought I would; I needed lots of measurements within my measurements to figure out where to put the ruler for a lot of it. So I haven't bothered drawing these measurements out in my Moleskine, just gathered lots and lots of numbers! 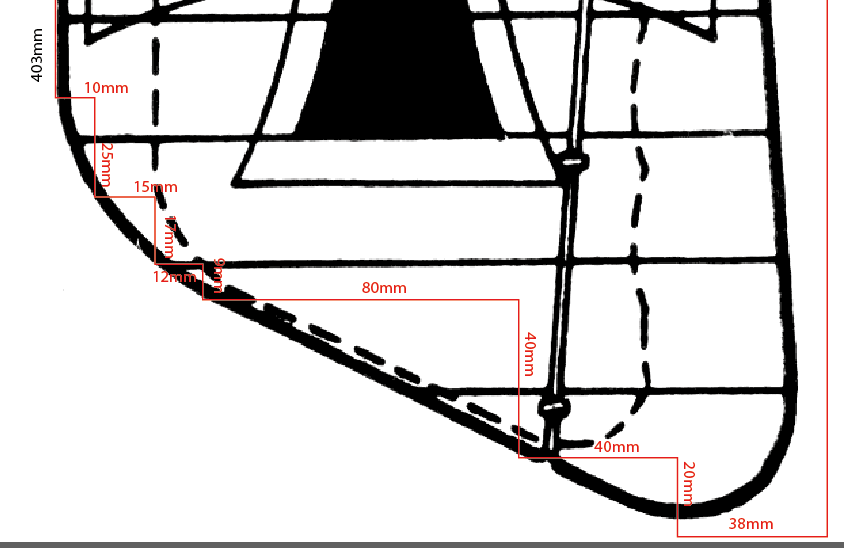 Am hoping to get these plans turned into paper tomorrow.
Last edited: Feb 12, 2022

#9
Ligbaer said:
updates?
Click to expand...
Yeah I've hit a bit of a busy patch and I haven't been able to make much more progress. But I do plan to continue this and get it ready by July.

#10
mastermalpass said:
Yeah I've hit a bit of a busy patch and I haven't been able to make much more progress. But I do plan to continue this and get it ready by July.
Click to expand...
FF is in june

#13
wilmracer said:
Any updates?
Click to expand...
So err... Yeah things have been a bit busy and I've started moving house, so this one's likely to end up arriving late.

Sorry for any disappointment, just got a lot on currently.

#14
I suppose I have since discovered the 'rollation method' and hence figured out how I'm gonna do the skin. So once I've got the formers out, the rest should be fairly simple, so that's the fuse figured out. Then there's just the rest of the details I wanna put on it...