We're having an FPV Fun Fly this weekend at Southridge Park in Fontana, CA on the 11th.
I decided to build the biggest multi engine bomber I could so we could all take turns at cutting the streamers in groups.

I elected for twin tail, and used dual elevator servos for redundancy. I also put each outermost motor on each wing on its own channel. This allows differential thrust to replace yaw control. In turn I eliminated all moving parts from the vertical stabilizers while maintaining 3 axis control.
Both the fuselage and wings are reinforced with yardstick spars.

From the start I planned for it to be able to take a hit.

No real planning was done in advance other than a sketch and the decision to make the wing 3 foamboard panels wide.
Completed in 3 long evenings with a lot of time spent staring, plotting my next cut.
I didn't record any sort of build log, but here is a few shots and a vid: 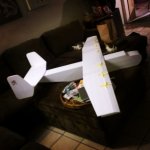 #2
Very cool! I like the nose design in your initial sketch.

The main thing I want to know about is the twin boom plane with d-day stripes in the last picture.
I