Inspired by the recent successes of @Mid7night and @FAI-F1D and their race for speed I though I would have a go. Rather than build a new plane, I was interested in seeing how fast I could get the Gee Bee R3 to go with the equipment I have, the initial goal being to "do the ton" (100 MPH). It currently flies on an E-Fite Power 15 motor (950kV, 575 watts) and a 9x9 prop. I bought some additional props from APC (8x8E, 8x9, and 8x10) to try out. The "E" is an electric prop. Unfortunately they didn't have the 8x9 and 8x10 in the electric version so I just got the internal combustion engine versions. Weight wise they were all about 15-20 grams.

The plane seems pretty fast on 9x9 so I thought an 8x10 would be the obvious upgrade based on the thrust stand data. I was sorely disappointed because the plane was slower and suffered from significant loss of thrust which nearly got me into trouble a couple of times. The 8x9 prop seemed to be just as fast as the 9x9 but based on the thrust stand data, pulls considerably less current. Of course, reading this you will note that I describe the speeds as "pretty fast" or "just as fast" because I don't really know how fast. I also tried these props on a Motor 10 Ultimate 2 (1300kV, 475W). This is the motor for the 1.5m Timber and I have been using two of them on the Tigercat - they are a really nice motor.

These are the thrust stand data.

This is where I started down the rabbit hole of coming up with a DIY data logger. If you are interested in building your own data logger for more money, time and frustration than simply buying one, read on.

First, how to measure speed. A radar gun is popular but I don't like the idea of having to fly in a controlled fashion close-ish to someone holding the gun. A pitot tube is oft claimed as the gold standard and I have one with a pressure sensor but it requires some calibration and you have to hack the plane to install it. I settled on GPS. GPS used to get criticized for not being "good enough" but I think today the units are very accurate. Per the US GPS specs, they are accurate to within 1 MPH over any 3 second span, 95% of the time. So as long as you are logging the data continuously, and not just relying on the max speed recorded, then you can check if you have anomalous data (for example, while testing the unit below by driving it around on the freeway, it told me that my 2008 Prius was doing 202 MPH! I bought a GPS module with serial (UART) output. Connected to an arduino, the unit pumps out NMEA GPS messages which can be read on the serial port. I could configure it to only send the VTG message (shortest message with speed data) and send at 10 times a second (10 Hz).

Once I had the speed thing sorted, I decided to add a voltage divider array for measuring the battery cells, a current sensor, and an RPM sensor. I also saw one of those cheap OLED screens ($7) which I decided to add to see what the various sensors were doing in real time without having to be connected to a computer (which won't fit in the plane). Also, with a couple of buttons added, I can change settings on the fly without having to re-progam the arduino. Finally I added an SD card module to log the data.

This worked pretty well. Knowing that I wasn't going to be able to make a shield to hold all of the components I decided to set them up each with their own wiring loom so I could install each separately.

This was a disaster - I had about half of the components in and by that time I couldn't find my fingers there were so many wires in the plane.
Finally I settled on making a shield for some of the parts and have others float on their own wires. With a little re-configuration of the circuits, this is what I ended up with.

This worked reasonably well. I could get everything in, just about. Weighs about 3 oz. After some testing by driving it up an down the freeway (within legal limits ) I was happy that the data were accurate although occasionally there was a spike in the speed data.

This morning was the true test. I had only a short time at the field so I limited actual flight testing to the Motor 10 (1300kV) and the 8x9 and 8x10 props. Good news is that the props behaved as I thought they had done previously - the 8x10 was considerably slower in the air contrary to what the thrust stand data said. I think the prop is stalling and I would need to add significantly more power to get it to work at its best. The even better news is that with the 8x9 prop I hit or broke 100MPH on three of the five passes recorded, with the max being 102 MPH. These are images of the flight logs. 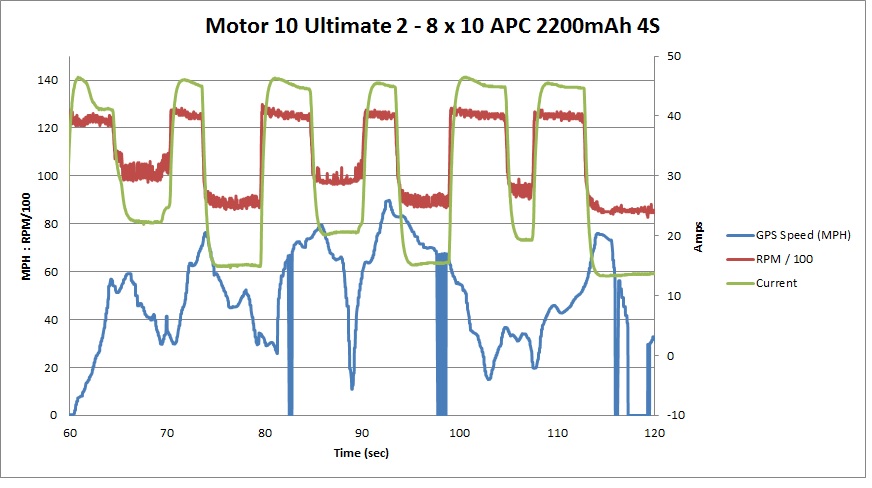 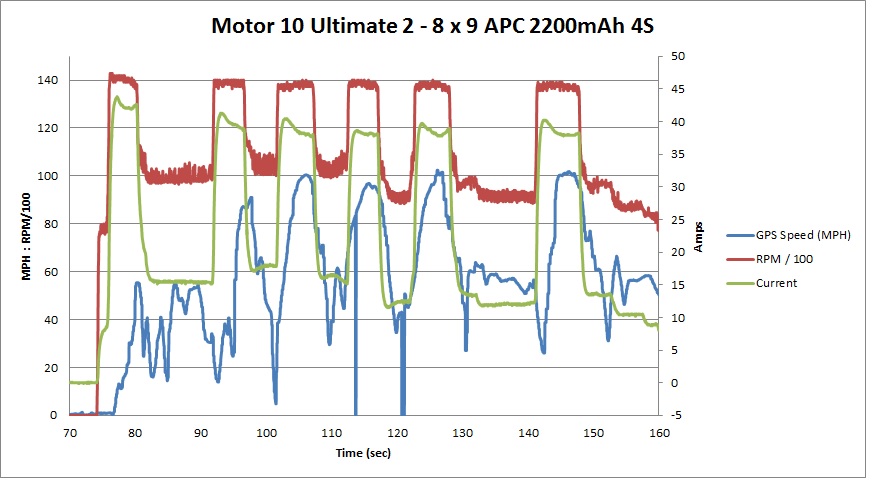 All in all, I am happy with the results and I think that I could probably try the Power 15 on 6S with the 8x9 prop to get solidly into the 100 MPH + range. This won't be for a little while though.

Also, the data logger worked really well and I am very happy to be able to finally confirm what speeds my planes are doing. I think a future iteration will involve a smaller microcontroller (probably an Arduino Pro Mini), a micro SD card, and a way to make the OLED removable so I can plug it in to set up the logger and remove it before flight.

Only bad news was that the Gee Bee had a bit of a rough landing after the second flight today and so I may have to remove the wing tips before throwing her up again. But that won't hurt the quest for speed.

So - not quite playing in the same ballpark as @Mid7night and @FAI-F1D - but having fun playing.