#1
so, maybe i have been in a bit of a foul mood lately, or maybe i just really wanted to build a AC-130 replica. you can decide for yourself...

anyways, downloaded the plans and set to work.

first stumble came when i tried to use cheap spray paint on the DTFB and the paper started to peel off. i have been shooting paint onto DTFB w/o issues for quite awhile but have always used either the Rustoleum 2X, or the Krylon Colormaster. so long as you start the spray off the foam, then move on it has never caused a problem. luckily it only messed with a few pieces and i was able to quickly recut them to replace the damaged pieces. i then went and got real paint and all was good.

the next thing i had to do was design the guns i wanted. i knew i wanted to mimic the AC-130 and it's gatling guns, and i wanted to go overboard. i wanted this plane to have a stupid amount of fire power. so i went to tinkercad and started working. if 1 gun was cool, 5 would be epic! so i designed 3 diff models. 1 for the wings, 1 for the fuselage, and 1 for the nose. i then designed the wing mount pod after getting frustrated with making it out of foam.

the 3D files can be found at thingiverse. feel free to use and modify to your needs.

i know people will think i am crazy for painting it haze gray but hey, it's supposed to be sneaky! i did add some green just because i like to make things look cool and i thought it worked with the gray and the green props. and yes, i got lazy and just used a bunch of "O"'s from a decal set for the windows. 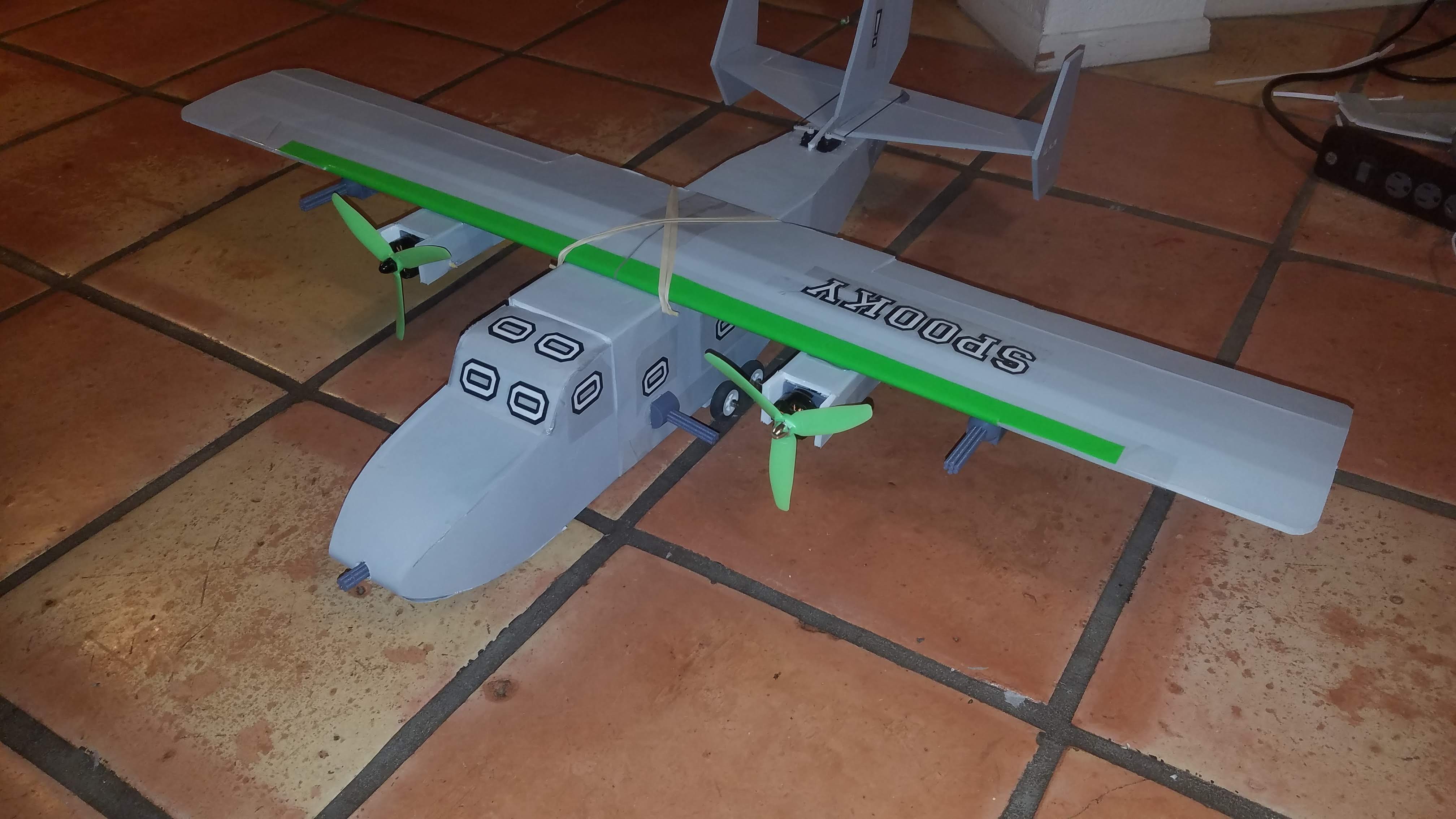 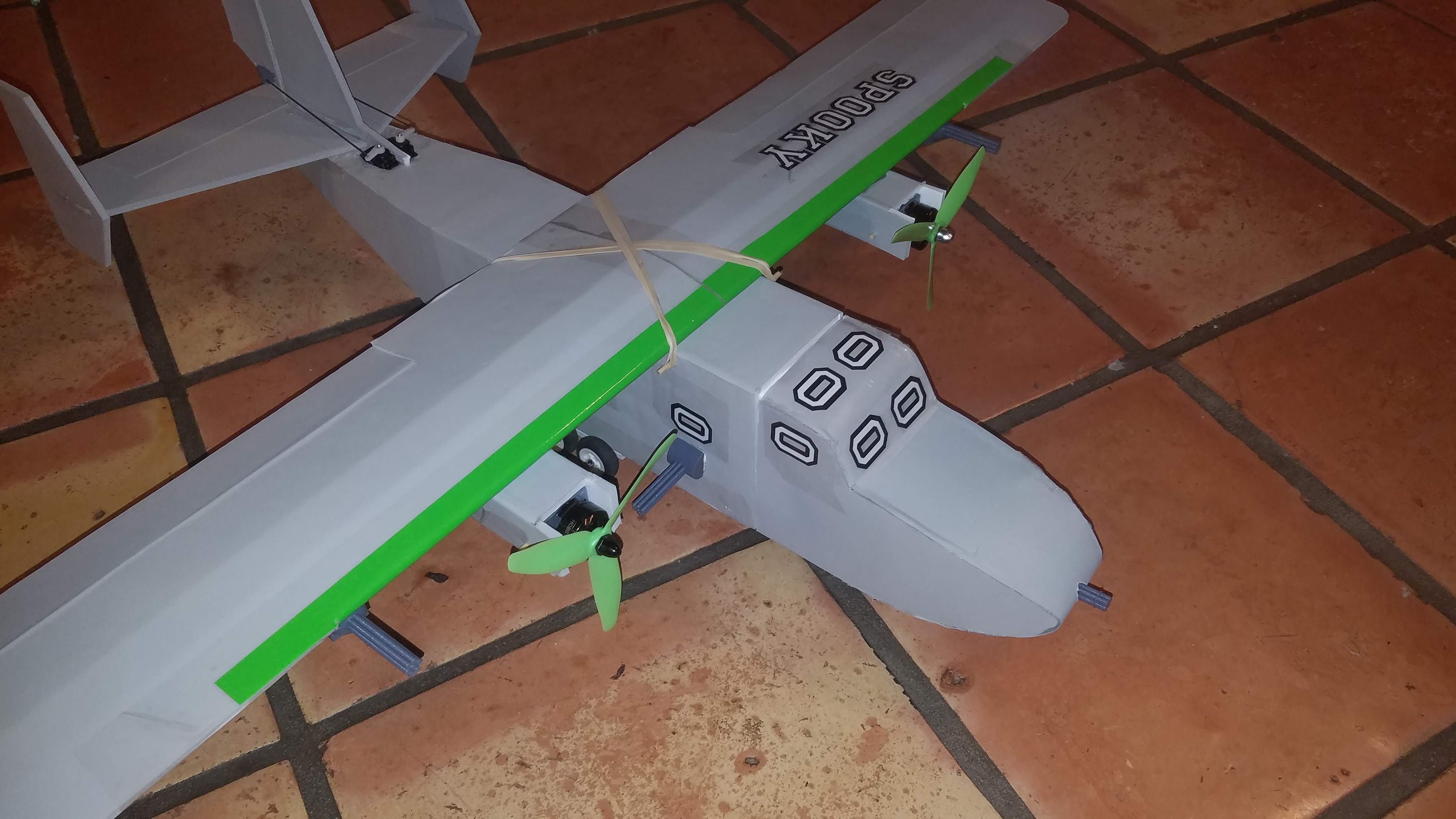 i am running 2 Hobby Sky 2204-2300kv, 5x4x3 props, 2x 12A ESC, and a 3S-1300 battery, currently with a 6-channel Orange Rx. it is currently setup with differential thrust and the plan is to jump to a 8-channel Rx so i can go diff thrust, flaperons, and still be able to have a channel for the back drop door. i currently don't have the door cut open but it will. i just ordered 24 mini parachute jumpers to stuff in the back.

i maidend the plane today and could not be happier. it has MORE than plenty power and my biggest fear of overwhelming the 12a esc was not an issue. i think my mod of running them outside the pods and in the direct flow of air really helped this. it also simplified the wiring and kept me from having to cut extra holes in the wing and fighting to stuff it all in. 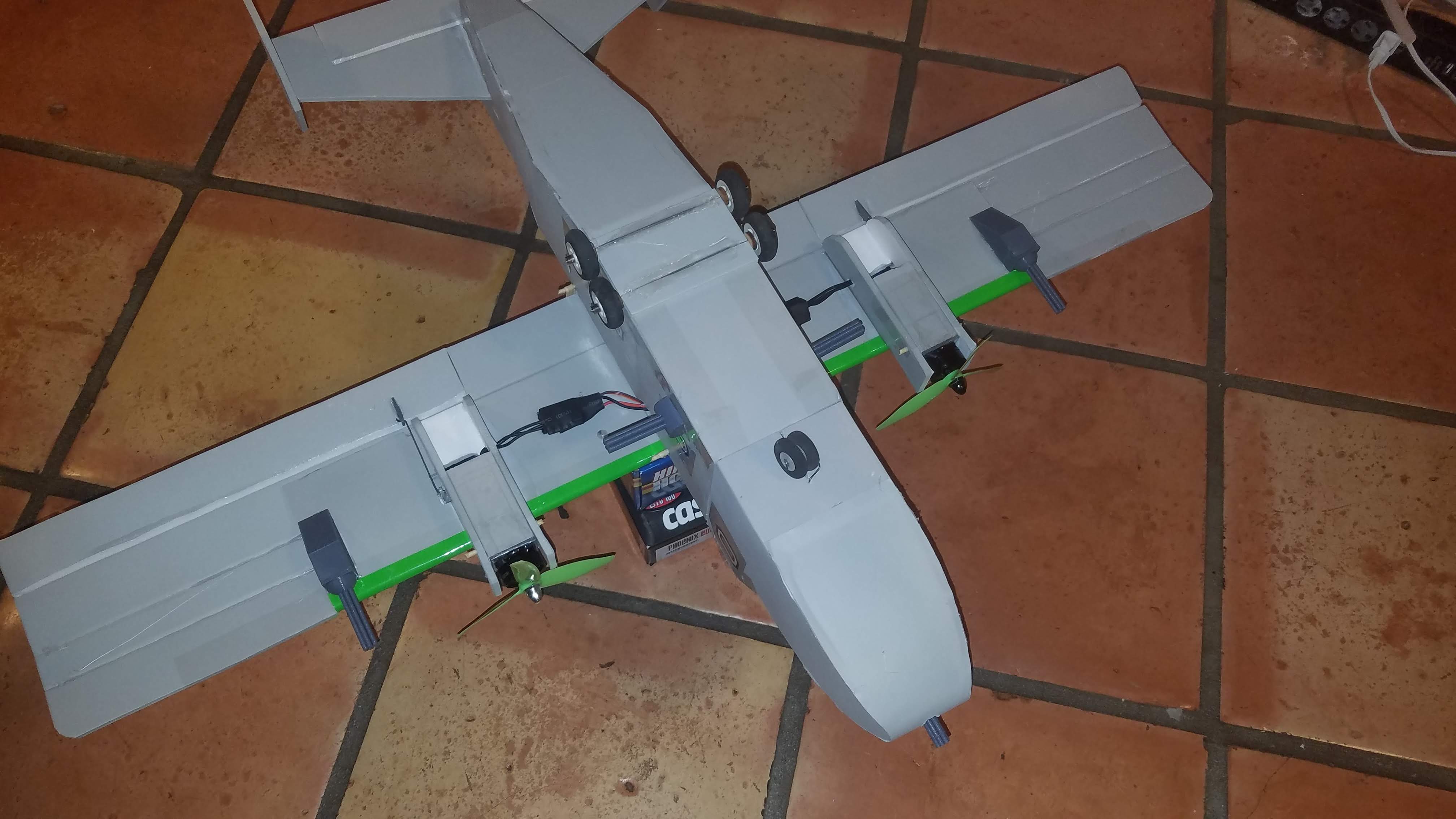 i flew it 2x today and like i said was tickled pink with it. not only is it powerful, it was able to handle the wind w/o issues and required almost no trim. the flat spins due to the diff thrust were epic!

next will be designing some wheel pants for the back wheels, then just fly the wings off it.

today was our clubs winter party and we had multiple twin motors at the field which is pretty uncommon. Rasterize was there with his full size Guinea and we were able to do a couple passes in formation which was cool. at one point in the day the only planes in the air were all twins, very cool!

if you have ever thought about building a twin, i would highly recommend this one. it's easy to build, cheap, and very capable.

#3
flown the airplane 6 times now and still tickled pink. added 3D printable wheel skirts to the first post. Will update with some pics once finished printing. wasn't thinking and forgot i needed to reverse the print for the other side...duh. made changes and added both to single print.

Even though we still haven't met yet, I missed you guys last Saturday. My Wife had a ROUGH Chemo Session the Day before, and she was really Sick all Weekend. I didn't have the heart to leave Her alone.
She's encouraging me to try to make the next one!

I'd LOVE to see this Bad Boy Fly!! I'd also like some of those Gatling Guns..... For future projects!

#5
yup, sorry you missed the picnic. the winter party is always one of the best. this year i made out like a bandit during the raffle. in fact i didn't win a single thing but ended up walking away with a set of glider wings, and a motor and esc to power our ISD. Rasterize and i attended the AZ Electric fest last year and we took his 42" Imperial Star Destroyer to show off. well, it worked and we got invited to fly in the noon show. one of the most stressful flights of my life. not only was i not flying my own plane, but the entire festival stopped as soon as they started playing the imperial march and turned to watch. it was just Raterize and me walking up to the line, we had a nasty cross wind, and i did not want to fail. thankfully Rasaterize gave me a good launch and i was able to complete a safe flight. as soon as we were done the decision was made to come back this year with something even bigger! the plan is to triple the scale and create a 13ft IDS that will fly. the motor (Himax 5018-530kv) and esc (castle 130a) i got will go a long way towards making this happen.

finished printing the wheel skirts and glued them on to the plane. i am sure i will still add some decals, maybe some nose art but for the most part it is done. 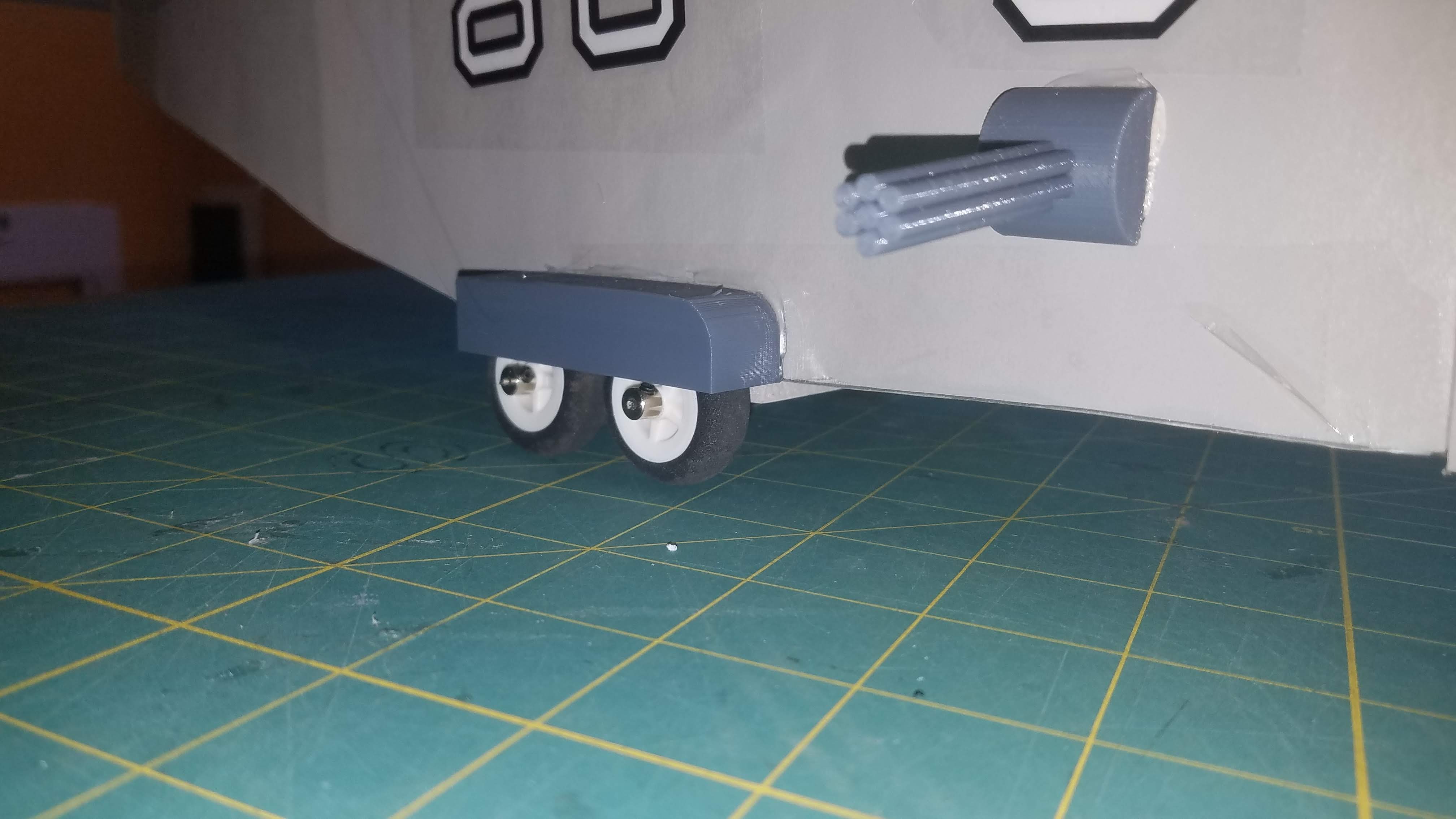