I have an almost 7 year old son whose interested in the hobby from watching me over the years and I've been thinking of painless or almost painless ways of getting him in the hobby. I have the Phoenix flight sim he flys with, he's got a small indoor whoop clone he flys, but he's in the stage he likes to crash on purpose. Long story shorter, I needed a plane that wouldn't need fixing every time he crashed, and flew slow, like really slow. Foam board being foam board I knew an FT plane probably wasn't the best choice to teach a 6 year old on. In the video the kids are flying these little park flyers they got from West Michigan Park Flyers. The blue and yellow plane the younger kids was flying really peaked my interest. A little research later I decided the Miniprop Magnum Reloaded was a perfect start for him. I had to get it from a distributor from Germany as WMPF were sold out. Watched a couple build videos to get some ideas and went to work.
Sorry I don't have any build pictures as the build was so quick and easy i kind of forgot. Lol But here are some completed pictures. 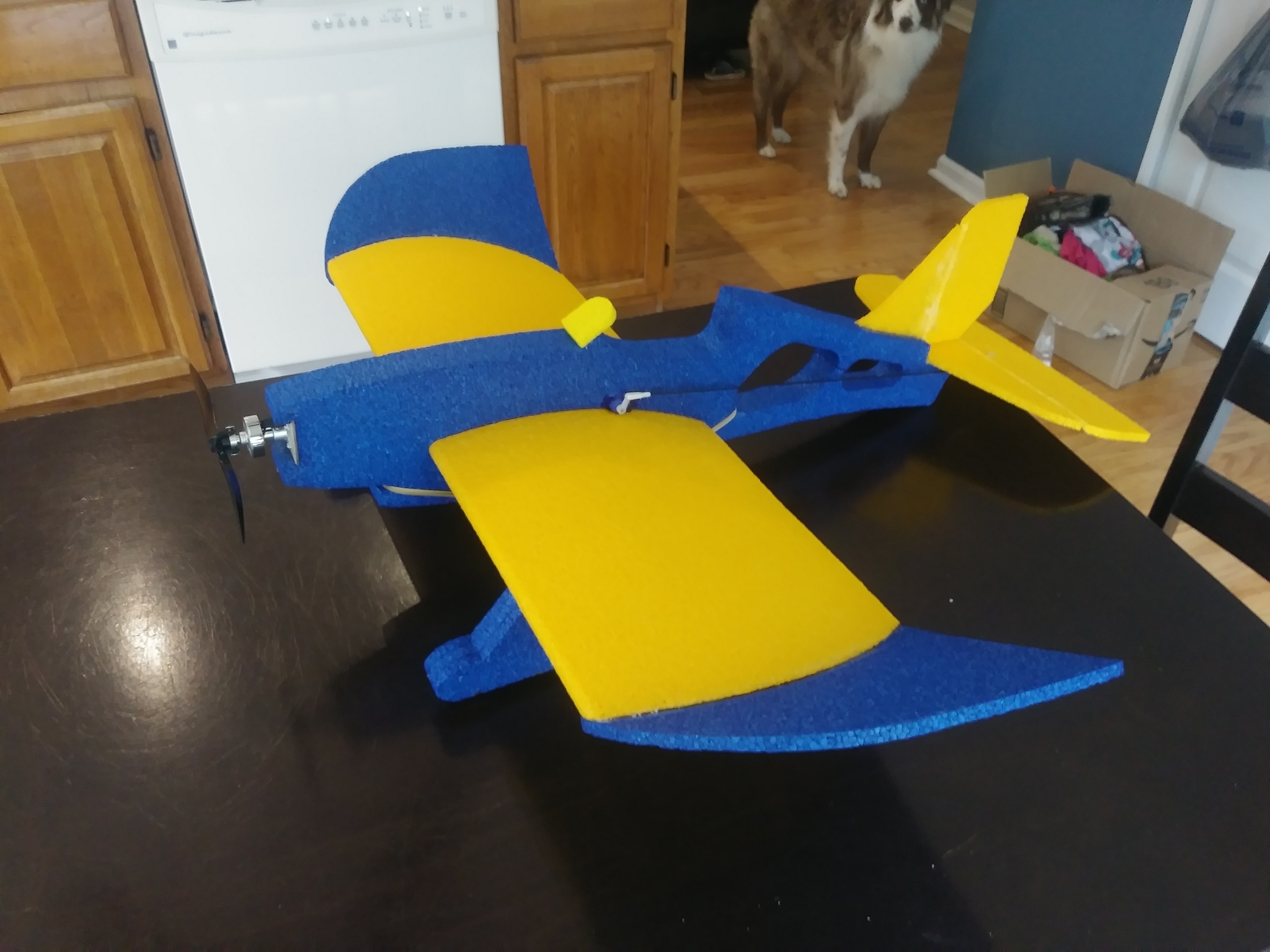 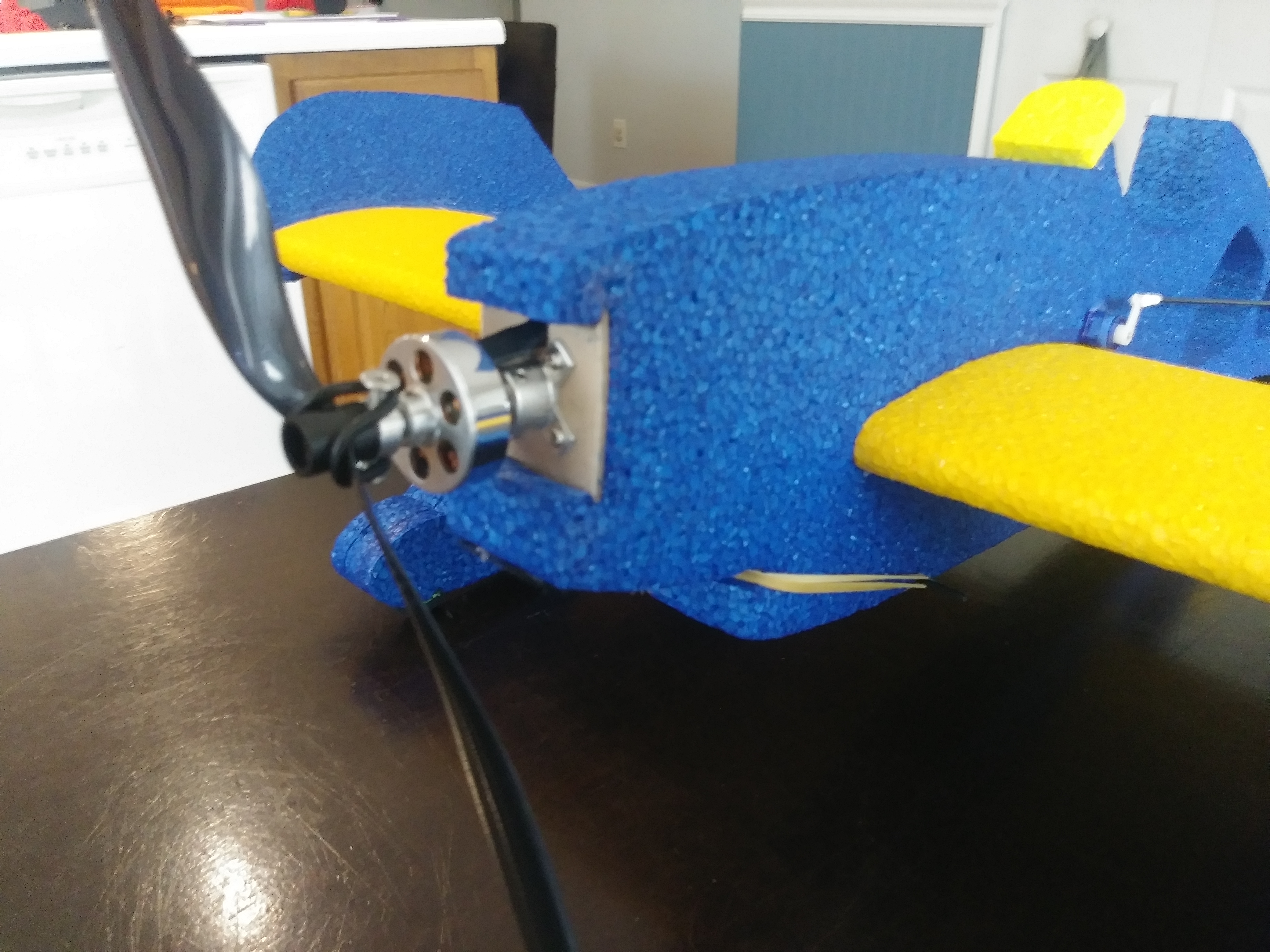 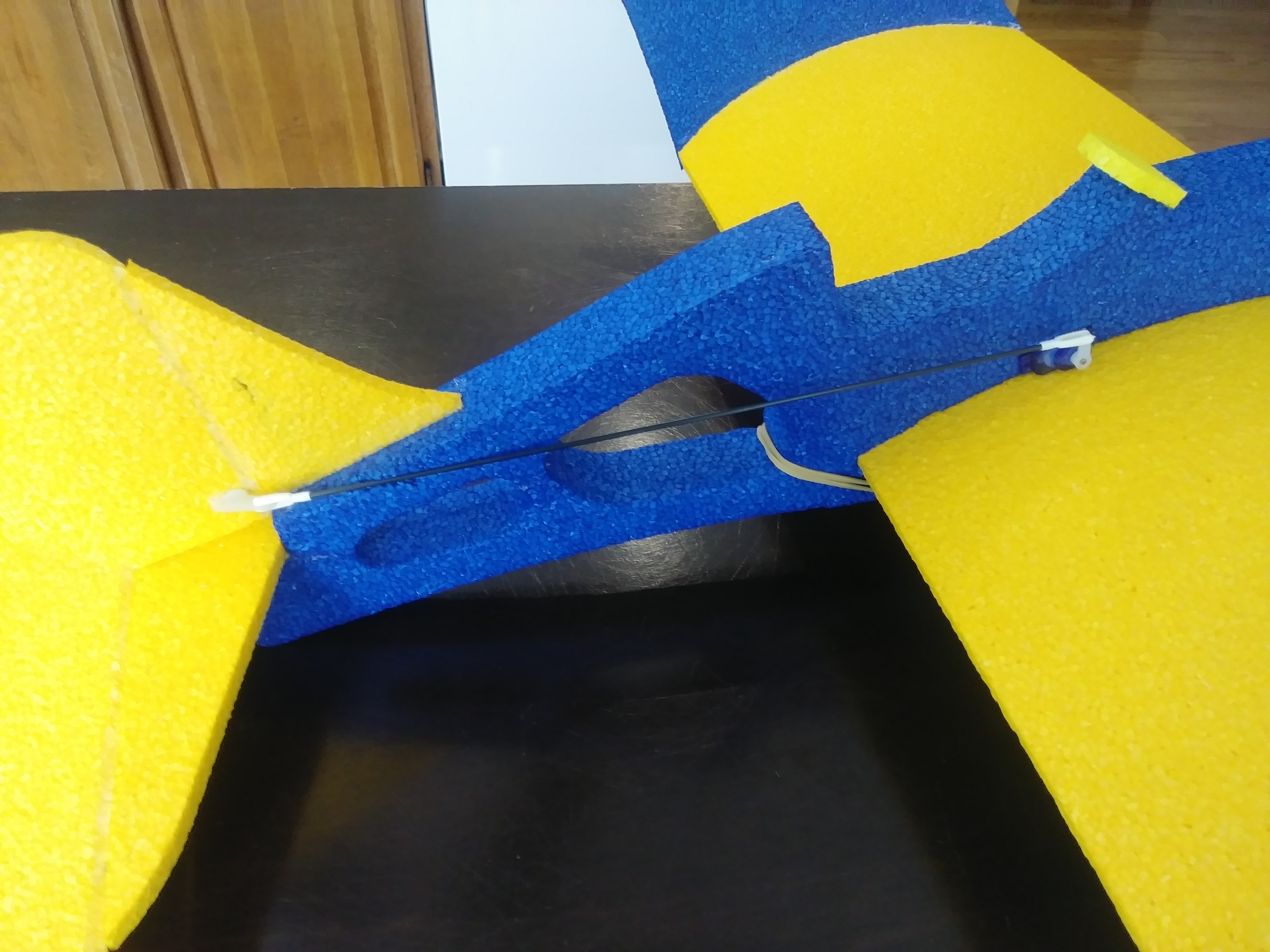 Here's the awesome landing gear that I didn't have high hopes for but work great on pavement or super short/thin grass. 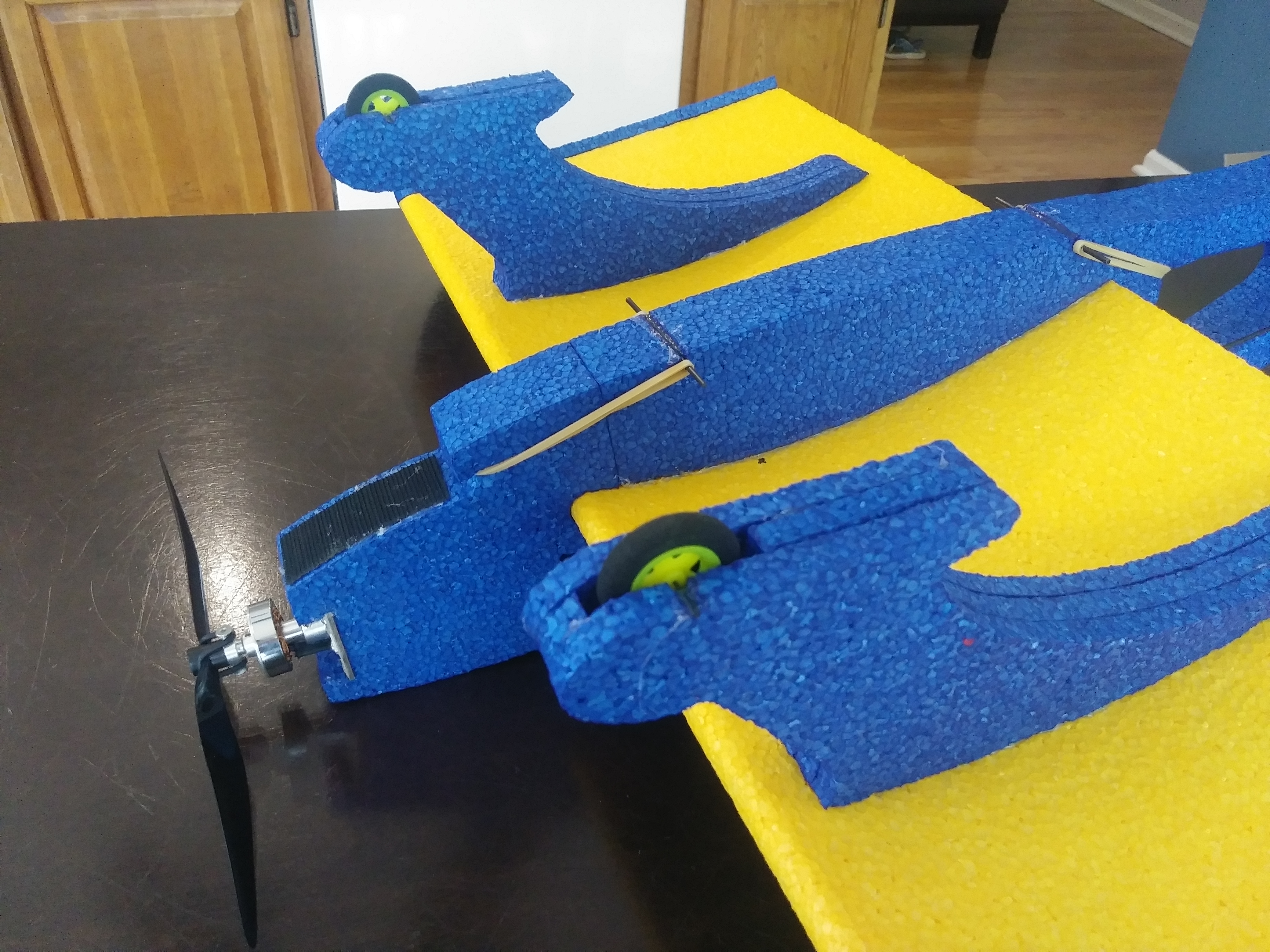 And here it's hanging with a 3d printed mount I designed/printed for another plane that sadly didn't make it. 😏 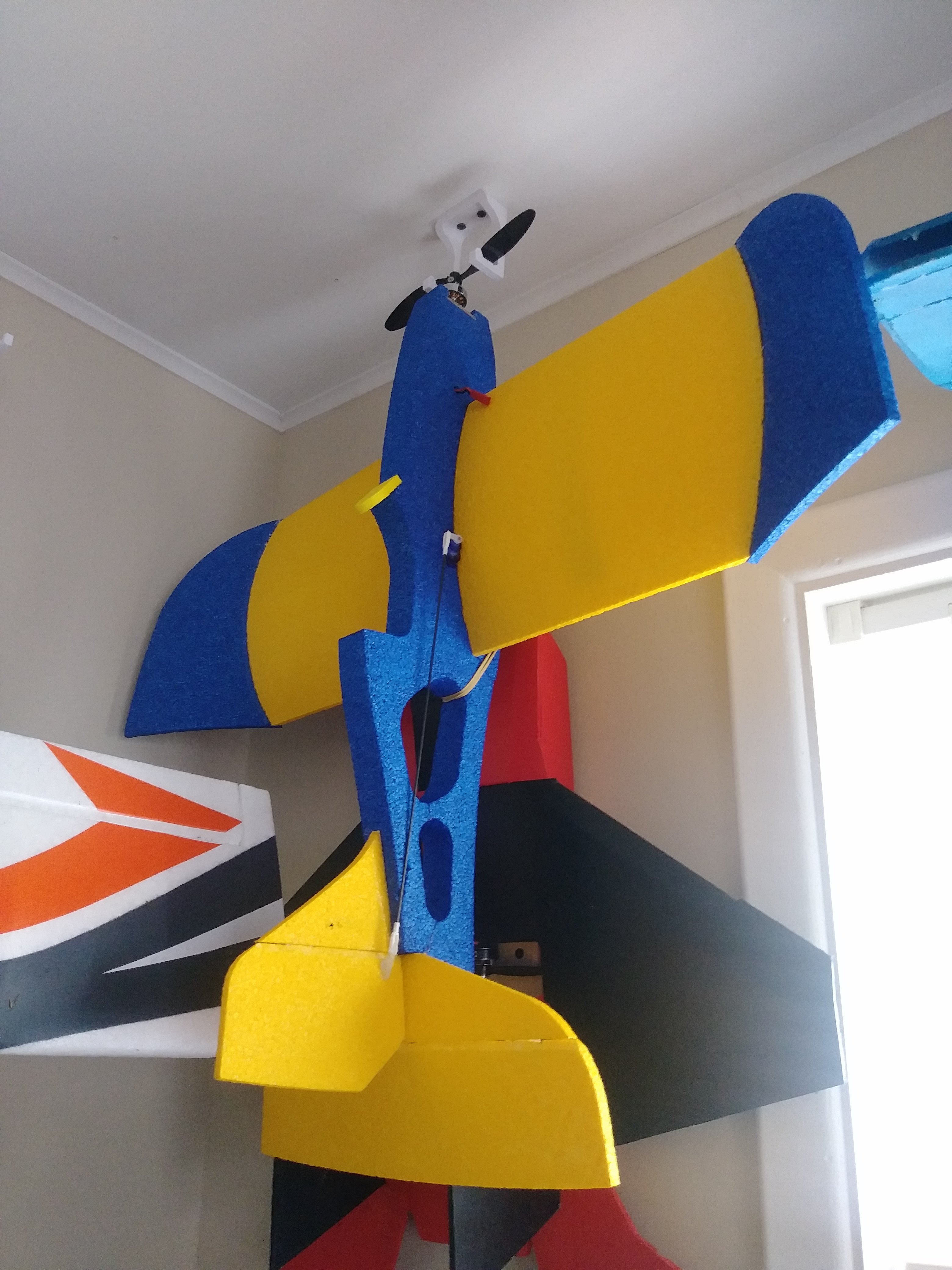 Maiden was awesome! Has plenty of power for not unlimited but close to it vertical, tracks really good for a 3 channel, stall turns/loops/rolls like a champ, and in a 3 mile wind almost stands still it's so slow, at 250grams or so flying weight it's wing loading is VERY low. I'm VERY happy with the way it flies. Next is the 6 year old test of durability. He hasn't flown yet due to our schedule and wind but I'm hoping this weekend to take him out. Maybe even get my wife to come and take video of him. If so I'll post the video for you guys.

And to make things even better, this plane has an upgradable wing to 4 channel and floats!!! Sold separately of course but if it's as durable as they say I'll be ordering the 4 channel wing for sure!! For anyone interested I believe you can order the plane with the 4 channel wing but it's called the Acro Magnum.

Anyway, if anyone's looking for an awesome looking/flying model to train someone on or for some lazy day flights I'd give this plane my full recommendation! Thanks for reading guys/gals and stay tuned for the durability test results/videos.
You must log in or register to reply here.
Share: Facebook Twitter Google+ Reddit Pinterest Tumblr WhatsApp Email Link
Menu
Log in
Register