#1
Air Race spectators witnessed the beginning of a new era in commercial aviation. This was in the form of a sleek racing job built by the Travel Air Company of Wichita, Kansas. This racer, whose design and construction began in 1928, earned the name Travel Air "Mystery Ship". Its design and construction was a closely guarded project at the factory and even as it landed at the Cleveland airport to participate in the 1929 air races .
it was the winning aircraft, a Wright Whirlwind powered Travel Air became the first recipient of the coveted Thompson Trophy.

A fourth "Mystery Ship" was purchased by the Texaco Company and was perhaps the most famous of the five. This was Frank Hawks' "Texaco 13". Frank Hawks had flown Mr. Hull, president of the Texas Pipe Line Co., and won a berth as superintendent of aviation for the Texas company. 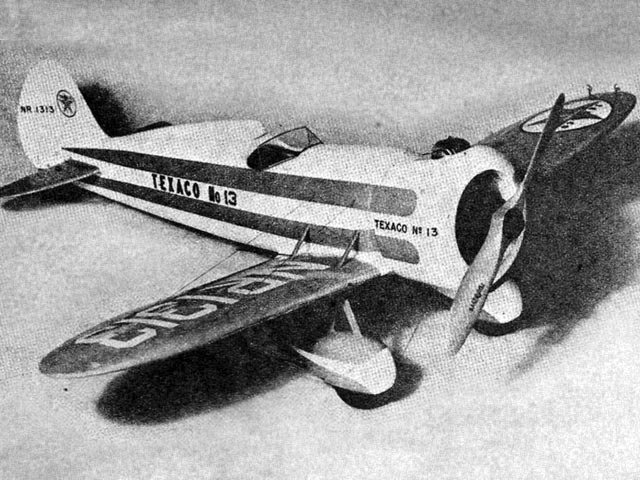 My other build project (AzteX) is under paint, and electronic work..
This "Texaco" plane have been a favorite a long time in design.. with the tryout build by Master series style, i found this would be a superb project using the method.
I found some small scetches, pictures and drawings on the plane, and on this info i could approx find the sizes on different parts. The build will be Wingspan 700mm X length: 490mm.
The idea on the wing i did used FT Speedster as find how, but keeping the Texaco plane size and dihedral style. The cowl i did made after 75% size of the Corsair cowl, shortend. Even the first part of fuselage was done by the Corsair plans. Some adjustment against the wing, and it did fit. This part is also shortened to fit to rear end of cockpit. ( this plane also need a cowl style on the front part of fuselage.. funny, but even more build training. )
And the tailfins? well, they too like alike the FT Speedster...
Last edited: Feb 26, 2020 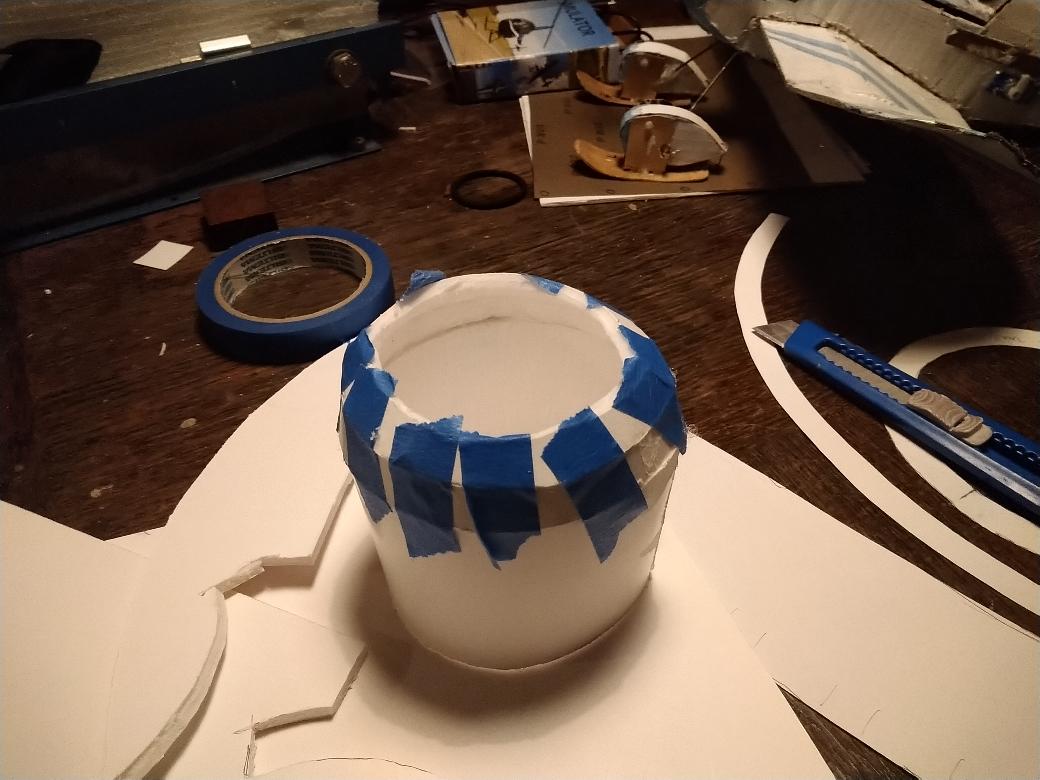 #3
the wing, and next parts of fuselage is done, here we see the three diffent parts of cowl/fuselage, and wing.: 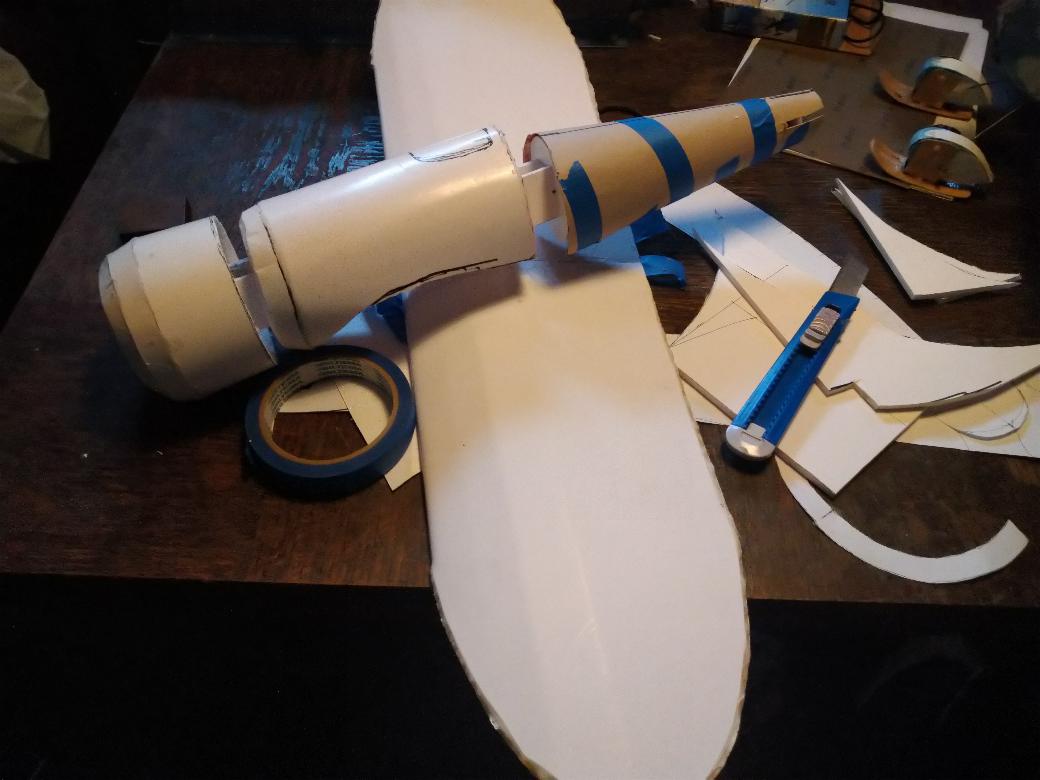 #4
put together, its gonna be like this... still the raised part of fuselage behind cockpit to tail is missing.. : 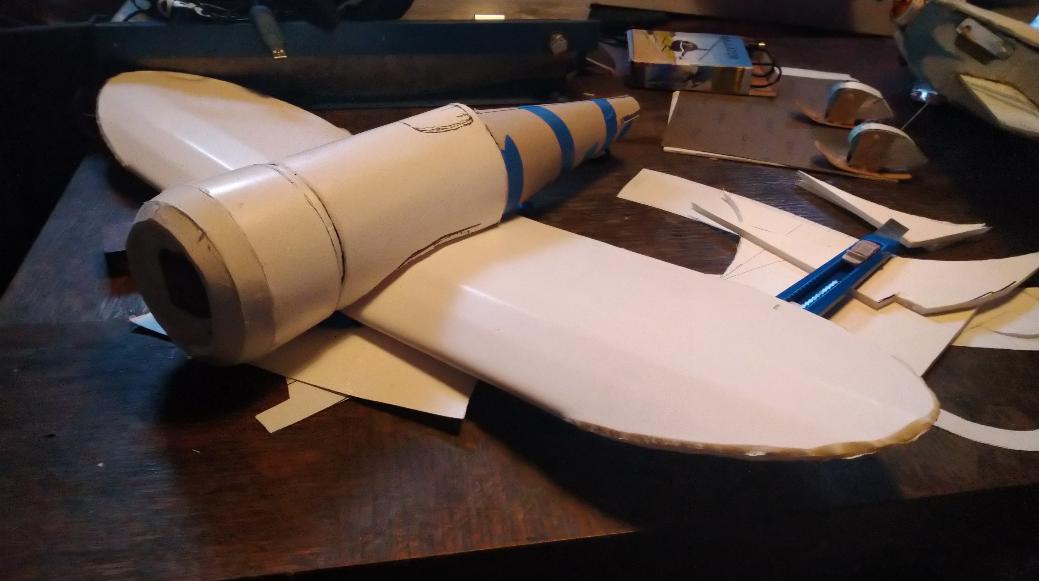 Mentor
#6
I’ll be following this build for sure!

#7
its a nice air plane.. I will try make a plan for the build, but i did "build & go", so not sure how exact i can do a plan, but the "questionable" things should be easy adjust to fit anyway.

#8
Looks good...I'm seeing a lot more on here giving this plane a try. It's in my list of planes to build too.

#10
updates... everything made, even tail at place. Finishwork in action. Most of the tail is much similar to the FT Speedster, a little adjusted. Orginally the tailsurfaces seemed too little (at least at a scetch i found) for RC. Even the wing is a touch wider than orginally to create a more relaxed flying.Canopy style is neither quite as original, but felt fit a lot better, and also made a hatch forward from there .Weight without any electronic.. 243g
Wing aint mounted at moment, because possible need get inside in back. Landing gear is next after finishwork is ready...
Motor gonna be a 2208 1400kv, or 2212 2200kv... and i hope the mailman get some speed, delivering more servos.. 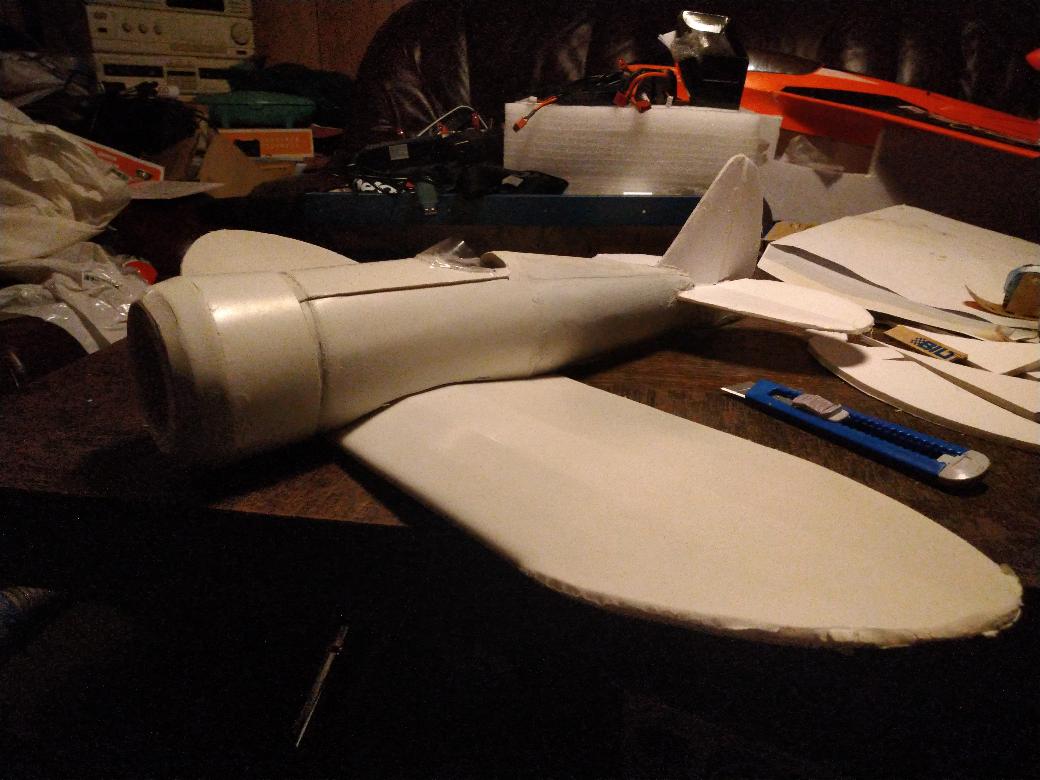 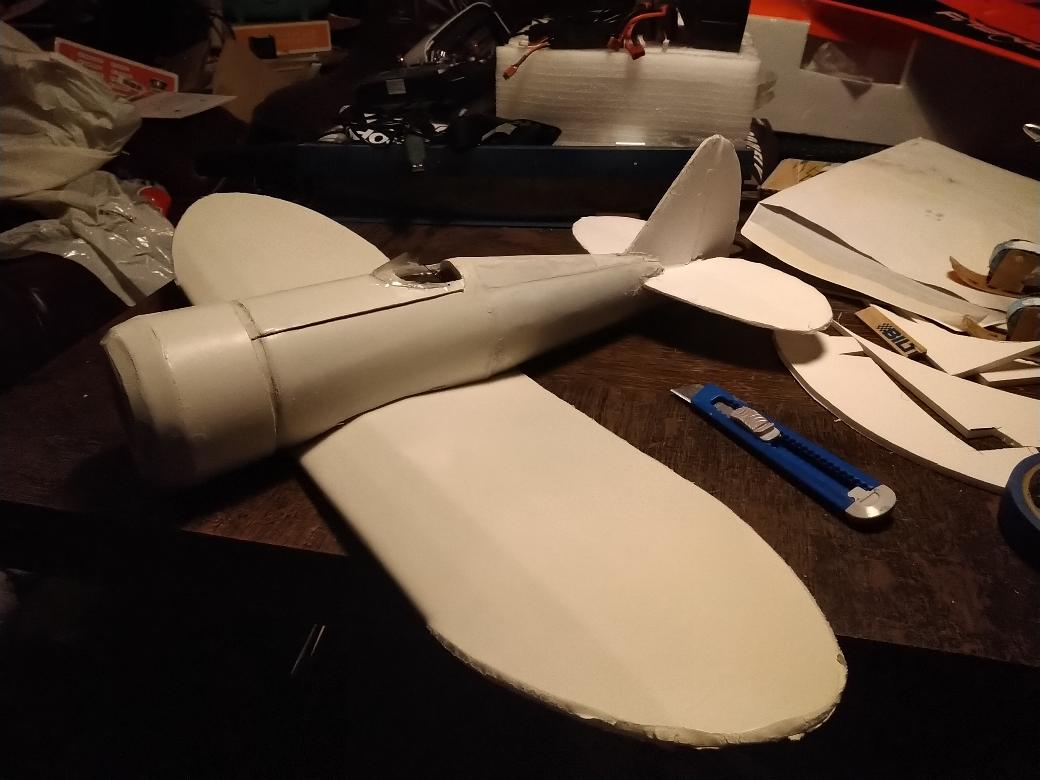 #11
leaded50 said:
@basslord1124 , how is it going with your Mystery racer?
Click to expand...
It's a long story, but basically shortly after I made my original post about starting on the Mystery Ship life took a crazy unexpected turn that really slowed me down for 2-3 months. I did manage to work on a plane or 2 here and there, but it really slowed me down. The Mystery Ship just became a super low priority then.

Things have picked back up and I just started doing a little bit of work regarding the plane. Basically I started looking into CAD programs and using those with any existing plans of the plane. Already I feel like this is going to be a tough road to learn CAD (I have no prior experience with it) and a part of me is just tempted to take the easy road to just enlarge any existing plans and go from there. I have a tendency to overthink things sometimes, so temptation is there just to take it easy and "blow up" any existing plans. I'd like to build mine in the 30"-50" wingspan range.

So, it's been slow, but progress is finally started to happen.

#12
sorry for stealing your idea .. didnt searched, and didnt know you planned make it either. Perhaps we could shared tips & trick.
My start was done by the drawings with a few measurements on, that i recalculated scale, and adjusted further to fit the foam plate i have left here. From that drawing i approximated sizes on different parts, and did go from there., Is my version a strict original scale? Nope, for sure not, its how i found it easy do make it, and fit what i wanted.....and i know, people seen it ready, dont know normally the differences from original . My cowling is to long.. its a littele wrong tailfin style (should be more rounded and smaller, eg.. so what. As i said, parts did came out of plans from the FT Corsair, the FT Speedster.. who did make it a lot easier for me. My version got 28" wingspan.

#13
working with lightweight filler now, and also reworked the top of rear part to be more precise .

#14
You didn't steal a thing @leaded50 ...as I later found out, @BridgeInspector did the plane before I ever did it. I think it's great quite a few of us are keeping the plane alive in model form.

#15
its a nice plane anyway, who would, or have maked it

#16
The Mystery Ship No.4 get closer and closer to finished, every day.... ordered the decals today, supposedly ready tomorrow. Motor, esc installed.... but still no servos in my mailbox.. Paint is ready though, in Stearman vermillion ,Creamwhite with blue stripe between. 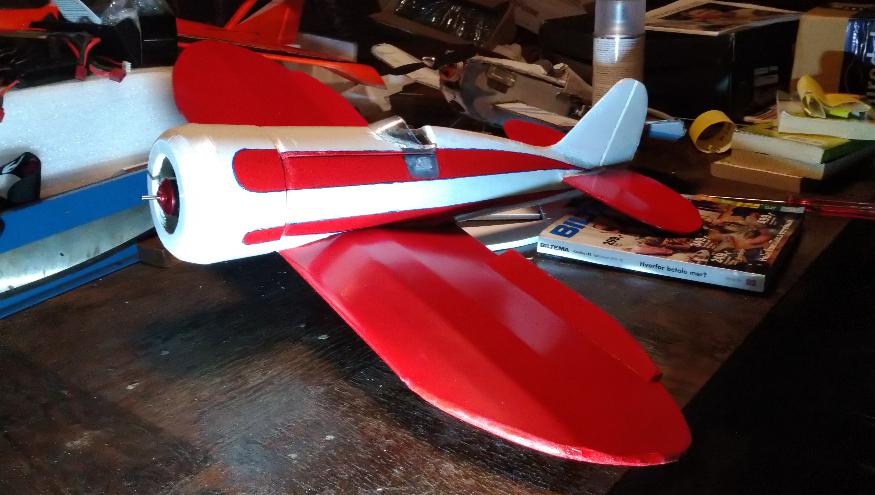 Mentor
#17
leaded50 said:
The Mystery Ship No.4 get closer and closer to finished, every day.... ordered the decals today, supposedly ready tomorrow. Motor, esc installed.... but still no servos in my mailbox.. Paint is ready though, in Stearman vermillion ,Creamwhite with blue stripe between.
View attachment 159496
Click to expand...
Now that looks slick!

Weird this airplanes...
First one, was red/black (race no 29)
The second, with Chevrolair motor, NR613K (race No. 32) , was just red.
The third Mystery Ship, NR-482N (Race No. 35, and later No. 26 ), "Shell" was in yellow/red and later as the Doolittle's Race No. 400.in black & gold. It also had a longer cowl..
This, the fourth. NR-1313, "Texaco 13" , had another colordesign at start, even if was red/white.
The fifth "Mystery Ship" was built for the Italian government. Many of the later Italian fighters were direct copies of this ship.
It had the colordesign as the "Texaco" with italian colors on tailfin

#19
Fun today, trying to glide the plane. Put in a 3s 1500 mAh battery,some weights similar to 4 servos and reciver, to ensure my understanding of CG was correct. 3/8" more back..., it glided perfect , totally straight, no "jiggling"!! Even by a 70 feet glide. 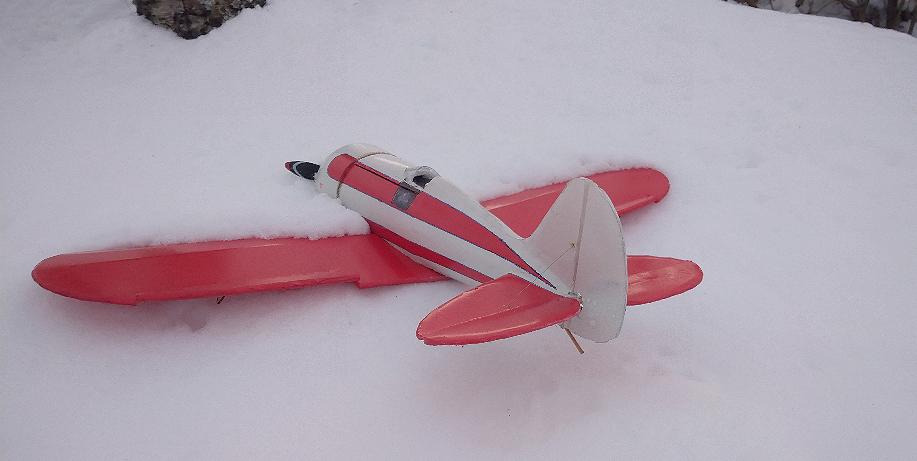 We got 23" with snow, no trouble with soft landing... just some work to get snow out from everywhere, sisnce the model aint fully watertreated yet. The opening inside cowl for ESC cooling was totally filled with snow far back. .
Im not in any way a experienced flyer... but this build im eager to try out. It depends if im taking servos eg.from another build now, because lack of patience with the mail...
The decals wouldnt be ready before Monday.

#20
I was going to have to wait for mail yesterday. Instead I drove to a local hobby store and bought two servos, but when I got them home and tested them (lucky that I did that first!) one wasn't working. I dug two servos out of another build! I share your pain...
😆
You must log in or register to reply here.
Share: Facebook Twitter Google+ Reddit Pinterest Tumblr WhatsApp Email Link
Menu
Log in
Register