#1
When I picked up the hobby last year, I was completely new to designing and building RC planes, and may as well have been completely new to flying, as my only previous experience was as a young teen in the early 2000's with mostly a 2ch throttle/thrust differential plane, and another one the controls of which I can't remember. I'd been looking for a hobby and skimming Youtube for flying RC craft, mostly home builds, as a person with high creative drive I wanted the full experience-design, build, fly. While I failed to gather much actual information about aerodynamics and how different control schemes and planforms and styles of plane work, I picked up a couple bad habits and notions. I figured what was really making this hobby accessible now is the small and highly efficient motors and lipos they didn't have until I was at least a mid teen. I figured you could tape such a power plant to basically anything vaguely resembling a plane, and it would do all the work in getting it up and keeping it up, and as long as it had "two flaps", it could turn and maneuver any way I wanted. Yeahhhhhh didn't really turn out that way. Part of what lead me to believe that, is I was looking at home designs that did not require much work or precision. Stuff like this: 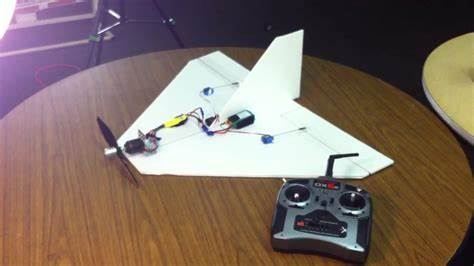 (Not my build)Nice simple delta. I figured something along those lines without a full fuselage that had a simple geometrical form would be best for a beginner to build. I was adamant about going my own way, and not buying a trainer or building a kit, or even going off plans. It's not that planes like the one in the above picture are a bad way of doing things, they are quick and fun and have sort of a homegrown/ Mad Max charm with the exposed electronics. Such a plane flies because the person who built it knows all the basics(CG, thrust angle, wing loading, the names and functions of different control setups that I just called flaps). I took it to mean I could just slap something together and it would fly. That's how I went about things for a while, with my first couple slender delta attempts, the first of which was just a plank of coroplast and the second of which had an open-topped fuse, crappy motor mount with bad thrust angle, and was made out of Elmer's. I had nothing but bitter disappointment and planes that spun out of control and barely moved further than I could throw them. I was using a Hobby King brick of a TX with no mixing or expo, and trying to run elevons with no onboard mixer. I also didn't account for CG at all, or know anything about thrust angle.

I realized I was shooting in the dark while working in a vacuum, and that I'd need to learn some more. I could have read a million guides and studied arcane stuff about aerodynamics, but I didn't really have the patience at the time. I decided joining the FT forum where I could have specific concerns addressed directly was more of a fast-track option. I wasn't wrong about that, but I was surprised(in a good way) To see just how quickly so many people answered with thoughtful, helpful feedback and encouragement, and a genuine interest in my progress, constructive criticism, etc. They followed up, checked in, provided knowledge and went out of their way to even go research stuff they didn't know offhand to help me, providing links and sources. I had a pretty rotten attitude at the time I joined, never towards people here but towards life and my experiences with the hobby. I have a high creative drive and an innovative, pioneering spirit, but I have trouble with anxiety, depression and other stuff, impatience and a low tolerance for disappointment and frustration. I'm also a bit absent minded, have trouble multitasking, and my fine motor skills and coordination are dead average at their absolute best, and a bit subpar most of the time. I'm also not a mathematically oriented person. I display some strong left brained tendencies too, but I've always been more a creative type that did well in English and history, more conceptual stuff than hard physics and formulas.

I gave in enough to attempt building a design that wasn't my own because I found one that looked super easy to build and unique, the Nutball. This was a great learning experience as far as learning about CG, thrust angle, linking my servos, and an introduction to RET style control schemes. My Nutball had an A pack, was only 15" diameter out of heavy Elmer's board that I'd paid way too much for at Joann's. It had no real fuselage and electronics taped Mad Max style like my previous builds, and although I could not control it, it flew. I learned more and more, never gave up my scratch design developments, but I wound up making use of all the advice I got here, and downloaded a sim which helped immensely with the flying part and getting a feel for how different controls and features and styles of plane actually translate to handling. I built a mini Scout kit, bought a RTF trainer, and began incorporating a couple basic FT building techniques into my own designs.

Fastforward. As well as being able to fly RC planes fairly well(at least basic trainers so far), my own designs are on the verge of real success, with one that is successful and just needs polishing. Most of the latest ones have flown, but not particularly well, except for the RETjet Nutball/Slender Delta hybrid. Talking about my progress is good and well, but I'd like to show it:attached are pictures of my first two slender delta attempts, my first Nutball, the RETjet successful prototype(with patched up nose), and the airframe sans electronics of my latest AET SD. My new deltas, aside from being much sturdier and more aerodynamic, are so much cleaner and nicer looking. They have attractive aesthetics and a lot of character, and the influence from FT build techniques and the community is very noticeable.

Mad scratch builders and designers, visionaries, those who risk it for the biscuit, keep doing what you're doing! Never give up on your dream designs, but don't be stubborn! Sometimes what look like detours or extra steps actually end up being major shortcuts.

#3
Almost forgot to include in my first post HUGE thanks to the FT community. I could not have made it this far this fast without all of you. This goes for all the people who have followed my progress and mentored me, all the people who ever responded to one of my posts even once and gave your input, even if, maybe especially if, it wasn't exactly what I want d to hear at the time.It also goes for everyone here, even among users who I haven't had any exchanges with, everything you do and post here helps, and for the FT guys who run this awesome site and design these great planes and make the hobby more exciting and accessible for us all.

#4
I have learned a ton of things from flight physics to advanced build practices and even a bit about balsa building.

The main thing I have learned is there are at least a handful of decent humanz left on the planet.
😁

#5
Glad to see your progress and good on you for sticking to it many would of given up by now. Being smart enough to figure out the way you were approaching the design aspects just were not working out for you, learning and making the changes necessary to make your dream planes fly. . SUCCESS BREEDS SUCCESS.

#6
I like coming across these threads where where folks just open up about their journeys. I may not have seen some of your original posts but this just brings it all home on how far you've come. And you've done an amazing job too! Keep it up and keep on designing/building!