Mentor
#1
Since the Pike flies so well, I've decided to tackle another forward swept design. I'm in the midst of moving my entire shop to a new location, so it's hard to tinker in the real world, and I've been doing a bit of drawing in my free time.

As you can probably tell, it takes a ton of it's design cues from the X-29. The back end is significantly smaller on my design though, and the nose is just a tad smaller. I've also reduced the size of the Canards a bit, and really flattened out the bottom of the forward fuselage. I'm hoping to get some wing loading aids from the body of the craft, and remove a bit of the work from the Canards. Not sure yet whether I'll make them functional or fixed. 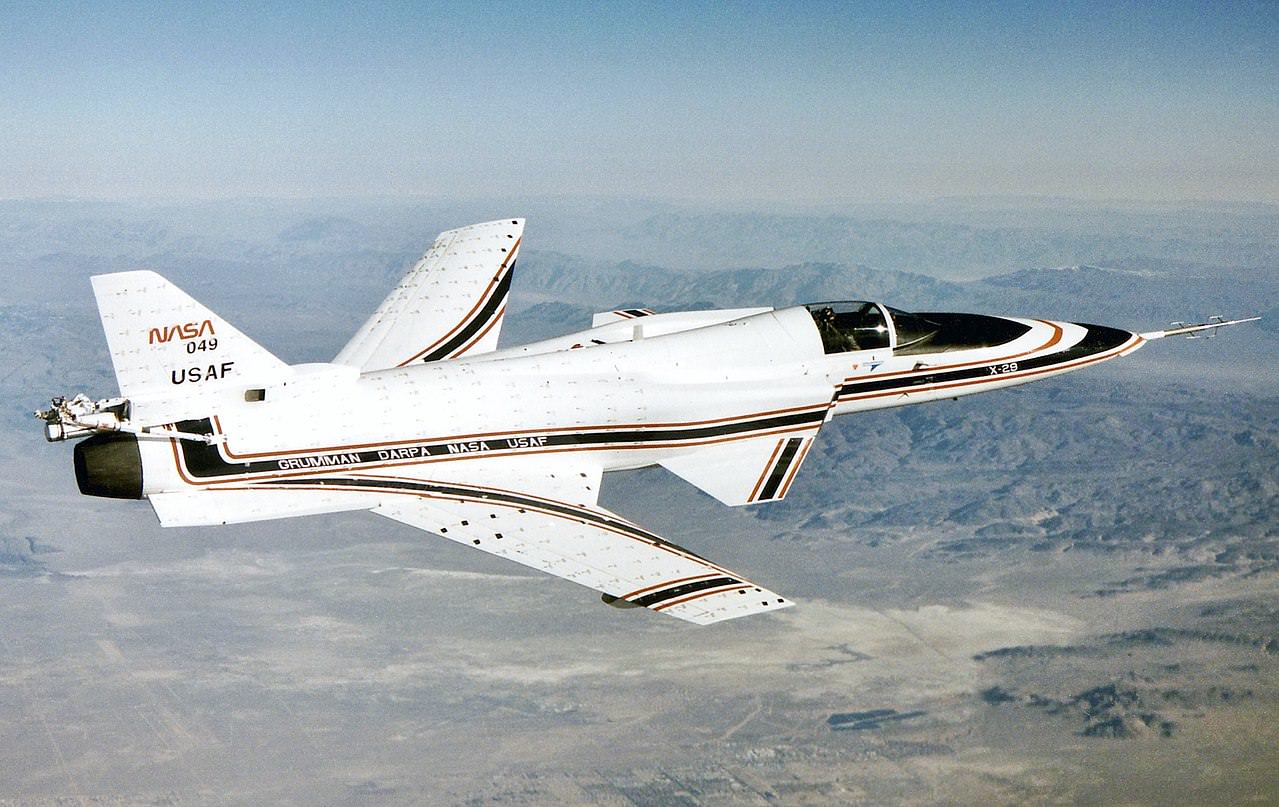 Why forward swept? Now that I know printed plastics, even PETG is stiff enough for a structurally unstable wing design like forward sweep, it's characteristics are awesome for the heavier weight of 3D printed parts. You don't even notice the wing loading on the pike, and that's a goal for this plane as well. With that said, here's the rest of my goals.

1.) As easy or easier to assemble than the Pike
2.) Printable from PETG, or even more flexible filaments like nylon. (Cheap carbon fiber arrow spars)
3.) Easy to Launch (this will probably be the hardest). I'd like this thing to be hand launch able. You can save a ton of weight, complexity, and cost if you don't need landing gear.
4.) High alpha hovering. (this ties into hand launching, gonna want a lot of power).
5.) Yaw control. Not sure if if a rudder will be enough for an EDF to hover. Could possibly go with dual v-stabs to help there though. Thrust vectoring may happen.
6.) No crazy print times. Hoping for around 100 hours maximum. We'll see.

So yeah, tall order. Especially as I don't know as much about available EDF electronics and standard prop stuff. I'm not sure if I should start right off wanting this plane to be printed from .3mm nozzles and a 70mm edf, or if I should go bigger and use a 90mm. It's going to take a bunch of calculations and motor hunting to find the right power setup I think.

Right now, it's drawn up for a 90mm edf with a ~46 inch / 1170mm wingspan. Print weight will probably be something like 1500-1800 grams if my estimates are correct. If flying weight is 3000 grams (rough guess), I'll still have really good wing loading. WCL will actually be lower than the Pike.

Printed weight will be significantly less if I knock the plane down to 36 inches, use a .3mm nozzle, and a 70mm EDF. I think base airframe weight will be 700-850 grams.

The whole project is still shape-able at the moment. I may tweak some of the fuse behind the intakes to make things a bit sleeker, and may need to tweak some other bits to make electronics easy to fit in. I think I have enough room for the necessary batteries.

Mentor
#3
wilmracer said:
Ohhh... I'll be watching this. LOVE the x29.
Click to expand...
Fixed the first post. Somehow I cut out a bunch of text, as well as the pictures of the plane.

Mentor
#4
localfiend said:
Fixed the first post. Somehow I cut out a bunch of text, as well as the pictures of the plane.
Click to expand...
LOVE IT! Very slick looking.

#5
Looks great! You do some nice designs!

Am I going to watch a thread that I most likely won't be able to build or put in significant advice and just lurk like Elon Musk on reddit?

#7
Oh, I'm watching for sure. And I think you should go with the smaller size and 70mm fan. Not because I have one of those already or anything. either way this is going to be cool.

Mentor
#8
Looks awesome! Do you think it would fly without the canards?

Mentor
#9
jaredstrees said:
Oh, I'm watching for sure. And I think you should go with the smaller size and 70mm fan. Not because I have one of those already or anything. either way this is going to be cool.
Click to expand...
Still doing electronics research. May do something crazy like a 90mm edf in a smaller plane just to limit amp draw for easier hovering. However, if I can make it work with a 70mm that's the plan.

DamoRC said:
Looks awesome! Do you think it would fly without the canards?

DamoRC
Click to expand...
Should fly without them. That's basically what the Pike is. They help with wing loading though.

#10
Once I get a printer, I will make this one and have a prop on the back.

#11
Did this ever work? Does anyone know of plans for any other 3d printed EDFs?
B