Admin
#1
The other week I needed some parts from HK and saw the new Turnigy HD ActionCam had been released.

From reading I learned it is simply a SJ4000 which HK slapped a sticker onto.
Still had been looking to buy a lighter flight camera for some time.

I know the GoPros are the cats meow and I love my 960 but I don't have $400 laying about and even if I did I'd be buying more batteries for my planes and tricopter.

Recently I decided to do a quick test between my various cameras.

Comparing the 5 cameras I fly with.

(Audio is from the GoPro)
The ActionCam is in close to factory settings which may explain the colour tone differences.


The GoPro 960 still has the best field of view but the new ActionCam has a rear display, is light and you can't complain about the price.


Next time I'll try and do a 1080 test with both cameras on the Tricopter.

I did order a spare battery with the ActionCam as you never know how long these items will be stocked.

After a little checking and according to FoxOffer who sell the micro-usb cable.

If the camera has the firmware of N201405270ZV01 video out via the micro USB port is possible. 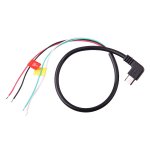 My camera does have the N201405270ZV01 firmware.
I plan on sacrificing my own cable and testing this.
If it works out I'll have a slightly lighter camera to FPV from.
Last edited: Jul 22, 2014

That way I ensure the camera always has a healthy power supply between the battery or tx.

After cutting a stock cable I could get the 5V to work but no video out.
Looks like the pin setup on a stock USB cable is not correct.

Once the new cable comes in I'll report back.

Admin
#5
Named after a dog

Mentor
#6
He's got a lot of fond memories about that dog.

Which will give me ground, +5 volt to the camera, video and possibly audio.

I'll report back when the cables arrive.
M

#9
Andre, how is the latency on the Turnigy compared to the gopro? I'm using a PilotHD and the lag is bad, nearly half a sec ... I'm thinking about getting one...
Forgive me if you already covered it, I have not watched the video yet.

Admin
#10
That is a great question.

I'll test all 3 setups over FPV when the cables show up.

I've never noticed any latency with my PilotHD camera.
Have to spoken to Fat Shark? http://fpvlab.com/forums/forumdisplay.php?43-Fat-Shark-R-C-Vision-Systems
They were super when I had to deal with the colour issues.

I promise to do a short and sweet test when all the gear is here.

Now to figure out how to capture the video from the goggles themselves and not the video out feed.

Admin
#11
Cable came in and it does work.


I'll report back when the cables arrive.
Click to expand...
how long did your cable take for shipping. just ordered one and am curious about their delivery times.

Admin
#13
Foxcom shipped on the 6th and arrived on the 20th.

HK shipped on the 12th and arrived on the 20th.

HK seems to have improved their cheap shipping.

Once I sort the wiring out I'll do a latency test with all 3 camera.

Admin
#14
This took way to long but finally wired in the parts. And now there is video coming off the camera to my fpv gear.

Thanks for the write up, I can't wait to get home and butcher a USB cord to see if it works. I'm wondering what setting is needed to get it to output video through the USB.

Admin
#16
Now I used the foxcam / hobbyking cable. A normal cable did not seem to do it.

When you do go to video out, there is an tv out option under the menu.
C

#17
I see all kinds available in HK's store. I'll try an old cable that I know will do data transfers. I have tones of them laying around.

#18
Aren't you afraid the mini USB will fall out of the cam Andre?
greets Marc

Moderator
Mentor
#20
It's chintzy, but I use electrical tape on my mobius -- I used to have a board cam + mobius, but it was just overkill for what I do, so I just fly with the mobius as the primary fpv and capture cam -- but because I'm relying on a loose mini usb port, I had to tape it. I also taped the microsd card in place.
You must log in or register to reply here.
Share: Facebook Twitter Google+ Reddit Pinterest Tumblr WhatsApp Email Link
Menu
Log in
Register