#1
My kids got drones from their grandma for Christmas a couple of years ago. They're toys and don't have any kind of stabilization assist. I've tried to lean to fly them, but they're veeery shaky and touchy. Just a little breeze can really make them move quickly and crash. My son attempted to fly his in his room one and it tilted straight for him, hes a bit traumatized and scared to try and fly it now.

Is there any way to upgrade them with a gyro spliced in between the motors and the main board? Or something like that? I've done a little research, but I figured y'all would be the experts to ask.

#2
I don’t think there is any way to upgrade a toy. If it never flew for more the a couple of seconds, it’s possible the props are the wrong motors. If you don’t have them correct, it will flip instantly. All quads have stability, they are impossible to fly without. Most toy quads have an automatic flip button, press the button & it will flip in which ever direction you push the stick next.

#3
Thanks for the info, we're very new to this hobby. They've been sitting in the garage for a while.

They've flown before, don't crash immediately. Maybe we just need to get away from the neighborhood into more open space.

#4
Maybe a pic of it would help determine if it would be worth the trouble...
Plugging in a flight controller isn't that difficult, setting up/tuning one can be a different story...

#5
If you really want to fly and have one small enough to be able to let your kids fly indoors I suggest saving yourself a TON of aggrivation and look into the inductrix or newbie drone or tinywhoop hobby grade quads.

With help from people here you could have a good experience in both setting one up properly and flying.

Toy grade quads are made so cheap you never know if it was able to actually fly in the first place and have nothing to do with your abilities.

Mentor
#6
I think most toys have the gyro and probably some accelerometers as well on the main board.

I learned on a Zyma X1 which had both in 2012 (it also cost half what it does today), but could only fly it outdoors in the early morning before the wind picks up. Removing any fairings that may get pushed around by the wind can help but if the copter is very light, it may not have enough ballast to fly well outdoors.

What is the make and model of the toy?

Do you have a link so we can read up on the specs?

Do you have any video showing the copter flying and acting in ways you don't want it to?
Last edited: Apr 28, 2019

#7
I grabbed a couple of pictures this morning. It's hard to find any solid info on them, it looks like there are several clones of similar design out there. 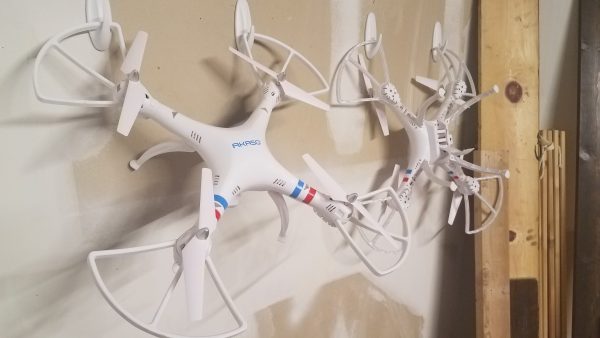 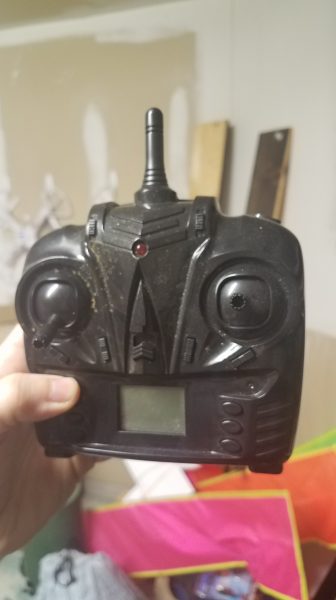 #8
I would not let younger kids fly those at all, definitely not in the house. The unguarded props and their relative size would be a problem even with gyro stabilisation.
If you want a cheap and fun indoor drone the Eachine 010 is excellent, although the controller is small and cheap feeling they are a fully ducted indoor safe micro drone. I use them at work with kids all the time, when you plug them in they are defaulted to both low rates and full self level mode with limited bank angles. They have great parts support, everything is available and you can add FPV. They can fly fast but are not going to hurt people or property like those ones you have, where the prop is almost fully exposed. They are also very tiny. Spare batteries are easy to get, you can get two with 6 batteries each with spare props etc for under $100.
The inductrix/tiny whoop are like the next level up from the Eachine type, both in cost and quality. They can be bound and flown off a full hobby TX or got with a slightly better than toy grade transmitter as a bundle. They fly awesome but are about 2-3x the price of an Eachine or H36 type toy one.
M

#9
A3M0N said:
I grabbed a couple of pictures this morning. It's hard to find any solid info on them, it looks like there are several clones of similar design out there.
Click to expand...
Yes, that is a common design. Several guys in my club have them. They banged them around flying indoors this winter. When you get them trimmed out they fly very well. You should be able to let go of the sticks and it will more or less stay in one place. When out of trim, they can be a handful. If you crash a lot, it is possible to damage the gyro or to strip a gear in the motos.
Last edited: Apr 29, 2019

#10
What protocol do they use @Merv or are you using the supplied TX?
M

#11
FDS said:
What protocol do they use @Merv or are you using the supplied TX?
Click to expand...
They all used the supplied Tx, no idea what protocol. A local grocery store carried them, for $30 RTF, they are a lot of fun. One guy strapped on a small FPV camera and flew around the rafters.

#12
Ok, I guess my expectations were too high. I assumed drone flying was steady out of the box. I'll keep practicing so I can help the kiddos should they ever want to try again. Right now they're enjoying building FT gliders, but they may want to try these again until we can afford to power the gliders.

#13
Trimming is just the process of hovering it in a still airflow, using only the throttle, watching which way it moves then adding trim in the opposite direction to get it still. That way you just go up and hold the hover, it won’t move on it’s own.
Stable hover is always the first stage in learning drone flying. Even the fully stabilised drones require a steady and fairly deft hand on the sticks. Only fully automated photo drones will auto hover and those are not good for actually learning to fly on.
Get them to practice hovering first, just using the left stick up and down.
You can tape the right stick in place if they struggle, as it’s excessive pitch and roll that will cause most accidents.
M

#14
I agree with @FDS. Find an open space like a driveway. Always place the quad the same way, so you are standing behind it. Slowly increase the throttle until is starts to drag it self around, not quite flying yet. See which way it goes, either move the sticks or apply trim to make it stay in one place. Once you get it trimmed to stay in one place, now let it come off the ground. I'd still keep it low until you get a feel for flying. Throttle control was the most difficult to get a good feel for.

Mentor
#15
A3M0N said:
Ok, I guess my expectations were too high. I assumed drone flying was steady out of the box. I'll keep practicing so I can help the kiddos should they ever want to try again. Right now they're enjoying building FT gliders, but they may want to try these again until we can afford to power the gliders.
Click to expand...
These larger style drones are really not that great. I hate to say it, but this is the price paid with the "toy" grade. They're actually like flying a whirling blender. Those plastic things are supposed to be "prop guards", but I will be honest that they don't really provide good protection. I'm not a huge fan of these because when you crash (and you will) replacement parts are pretty hard to find unless you have another model that's the exact same thing.

Hobby grade drones like the Inductrix, TinyWhoops, and NewbeeDrone Acrobees, have a large following. because of this, there's a LOT of parts readily available through various outlets, parts to upgrade them, and lots of support from the community for things like programming. In addition, they're a heck of a lot of fun to fly indoors. I bring mine in to the office quite often and fly around when everyone's gone. They CAN hurt someone if you fly full tilt into them, and they're not NERF balls, but they stand up pretty well and are safer and, in my opinion, easier to fly than those Syma knockoffs you have. Plus, you can grow with one of the Inductrix/TinyWhoop/Acrobee quads and learn to fly more difficult styles of flight used in race or acrobatic styles, literally with the flick of a switch.