Do you think to built something special to go to FliteFest??? Maybe you should try! It's always fun to work months on a project to destroy it miserably when there a couple thousand of peoples...!!!

This intro video here is pretty self explanatory..!

For those who want to know a little more about the history of this one of event, James Whomsley, who write most of the FT articles,(nice guy I got to know at FliteFest HO 2018!!) did write this amazing pieces just to show you guys how the idea of flying tanks is not that crazy!!.......

Back it 2017 I did started a built tread for the 1/12 scale flying tank, but never got arround to realy post everything I did.... This time I will do My Best to show as much as I can..!!


I will try to keep updating this tread so we can monitor my progress in the project..!!

#3
That tank is da bomb. Fun seeing a tank "drift" like a car on that hardwood floor.

I could see fpv tank races on old roller skating rinks being popular.

I am sure with your skills and ambition you will have that flying in no time.

I wouldnt mind having a foamy tank to run around the yard on no fly days or for when the kids are out to let them have a little introduction into rc.

I would probably be fpv crawling around the apartment most nights after dark. Good way to use packs that didnt get flown during the day hehe.

#5
I deassemble the thing for painting.... Lots and lots of parts!!! 1 and a half month of design trial and building. With a lot of sleep less nigth..! will be rebuilding it step by step once painted to show you guys what it takes to built a tank! 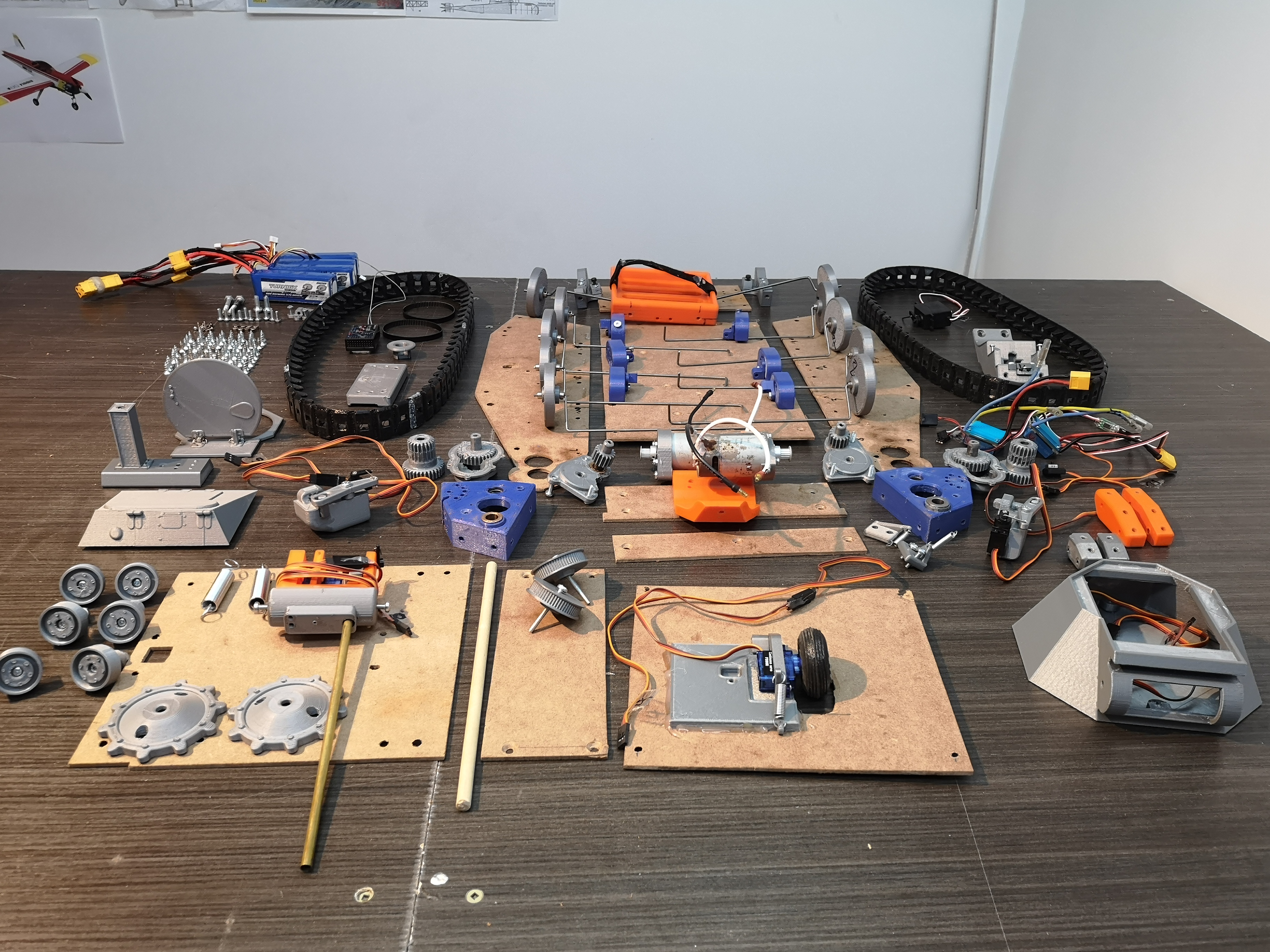 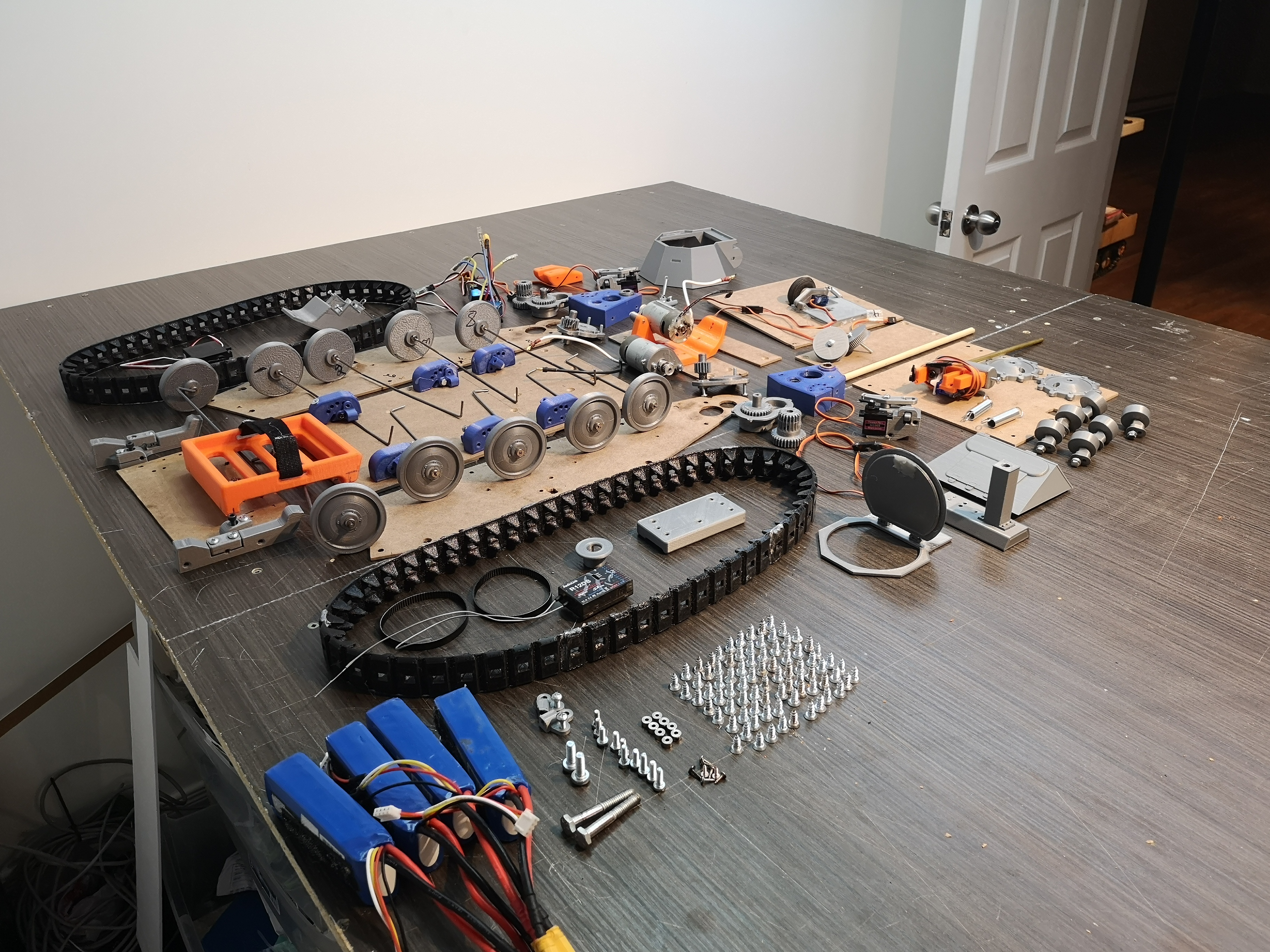 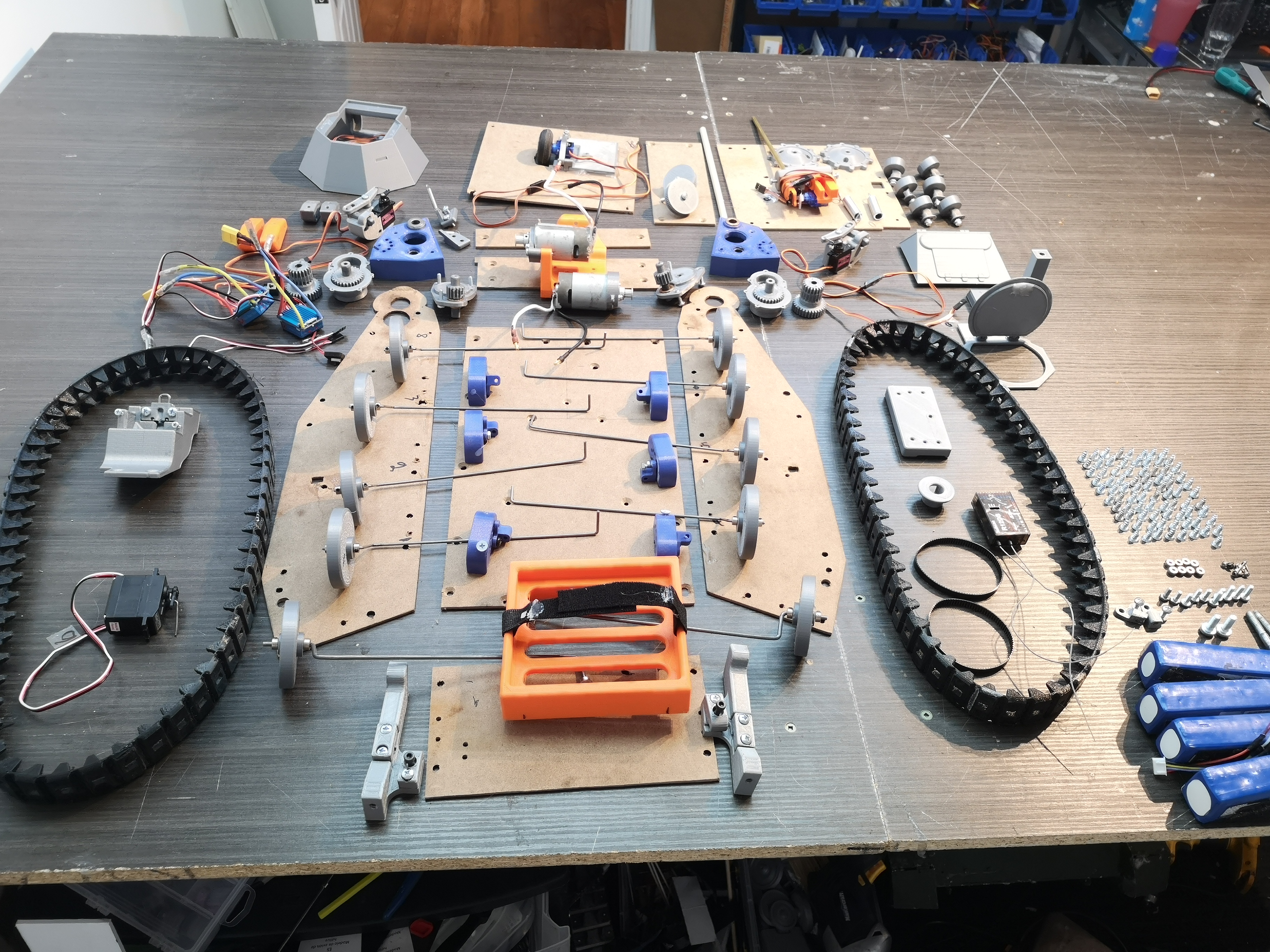 Mentor
#6
That is awesome! I've always wanted to know more about tank construction.

#7
Paint is drying near the fire.... Will assemble thing back tomorow slowly!

Mentor
#9
Nice! What are those panels made from? MDF? Ply?

Mentor
#11
J-MaxRC said:
Masonite 1/8 thick! 2 coat of primer 3 coat of hign resistance stair paint...! You know ... Because paint need to be strong on a figthing tank..!!
Click to expand...
Makes perfect sense to me Built like a tank!

#12
The video is getting togethere as I'm rebuilding the tank up! I will kind of explain what will make this 8 and 1/2 pounds tank fly in the coming video, but I want to explain more on the mecanisms I made acheive that..!

So first the tow release.

Because we alreday saw a flying brick fly with the FliteTest guys, but here it will be a glider brick...! I will try to get the wing and the tail as ligth as possible but keeping a very strong integrety in the wing. But even twith my best hope, I give myself an 15 lbs total flying weigth goal...

Not sure yet if it's a forgiving or optimistique goal... Because of that I did over engineer the tow release mecanism (at least I think over built...!) 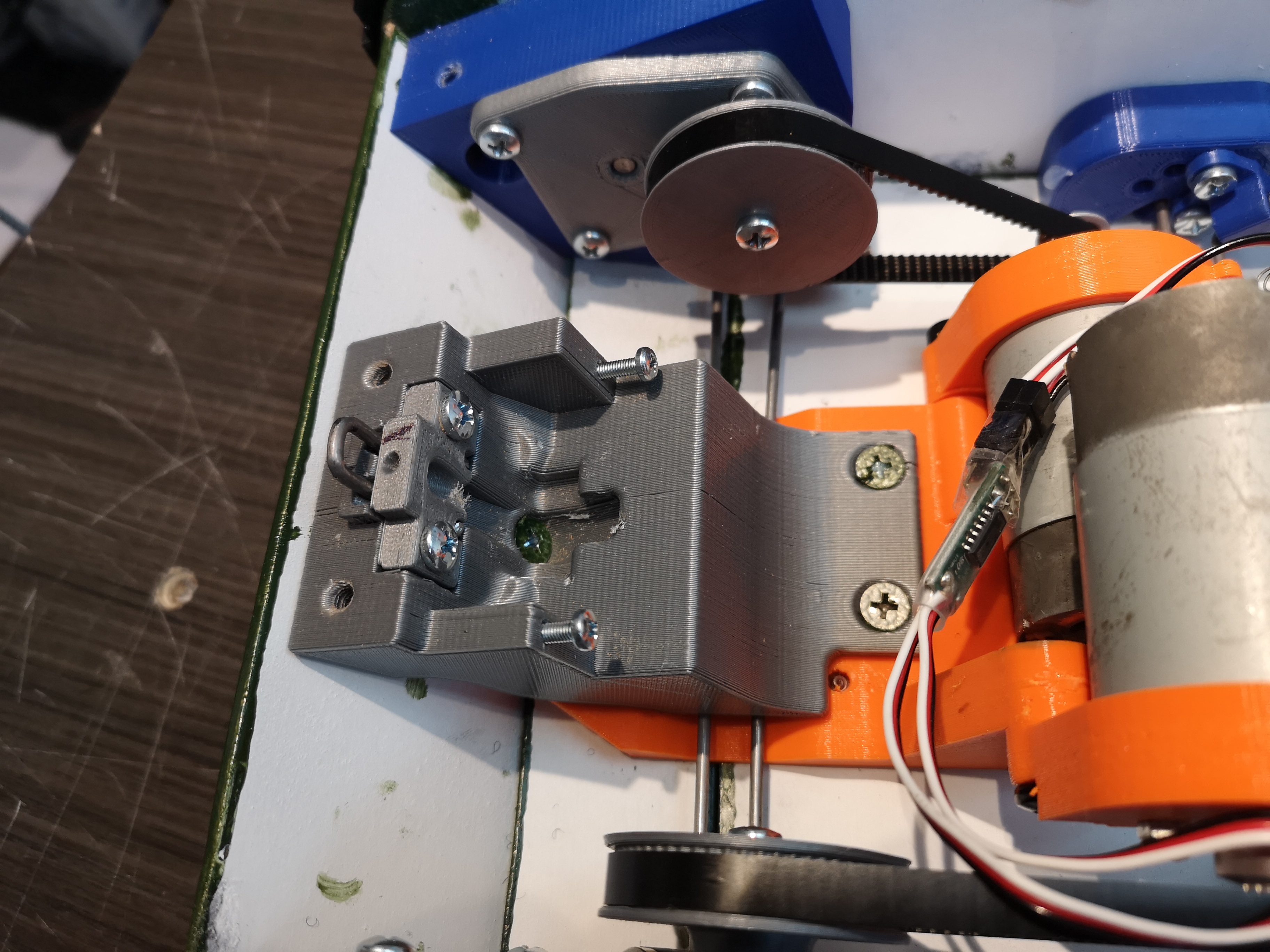 The idea is to link the bracket to as much part as I can. In the picture, you can see that it's attach firmely to the fronts plates, the motors bracket that is itself attach to the lower front plate and the floor. Also there is to more hole on the top of the bracket to screw the front plate that is attach to 4 other brackets to make sure that I won't rip off the entire front of the tank on take off...!!!

#13
I put a big servo to make sure the thing will release in fligth..! 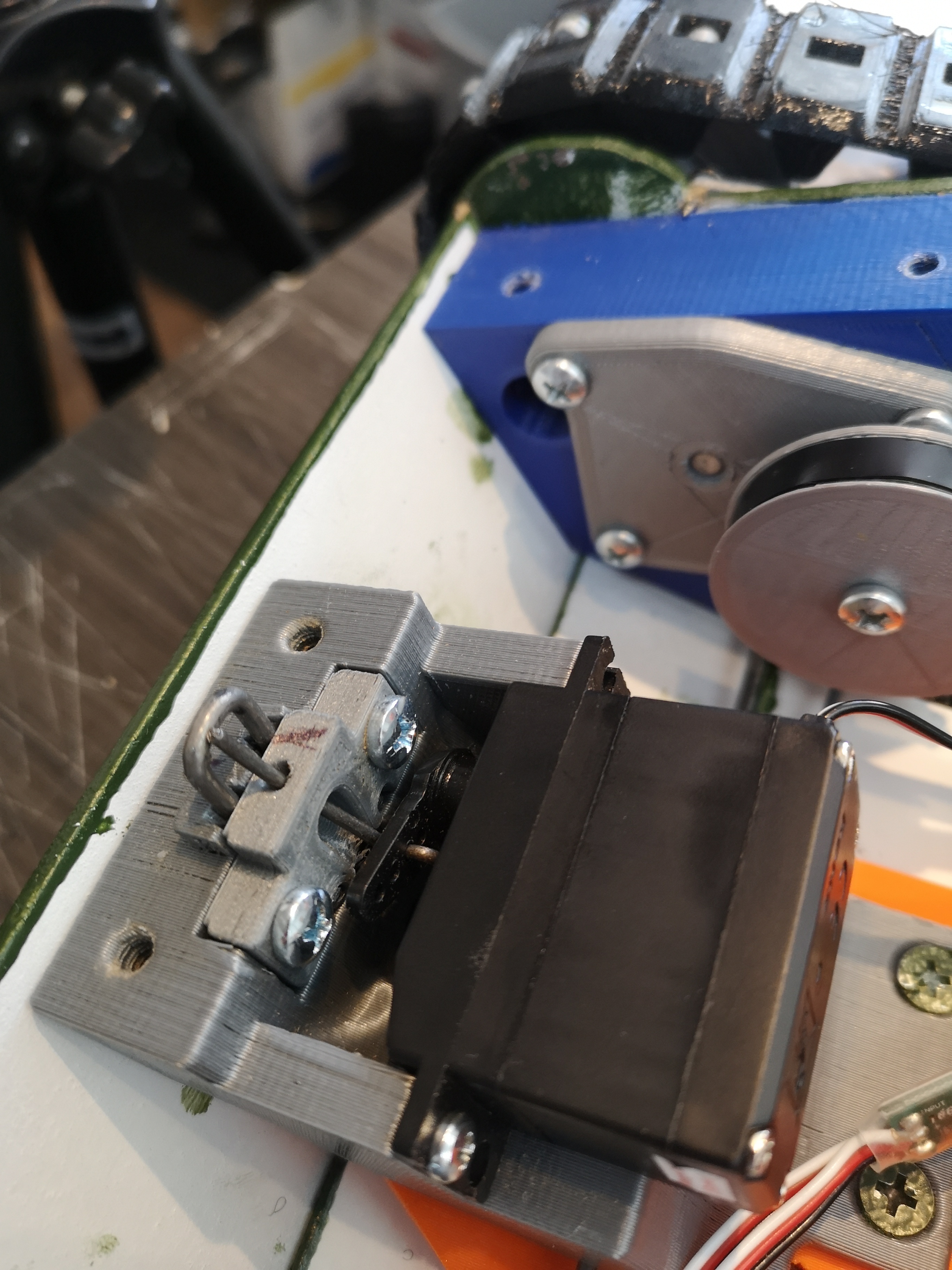 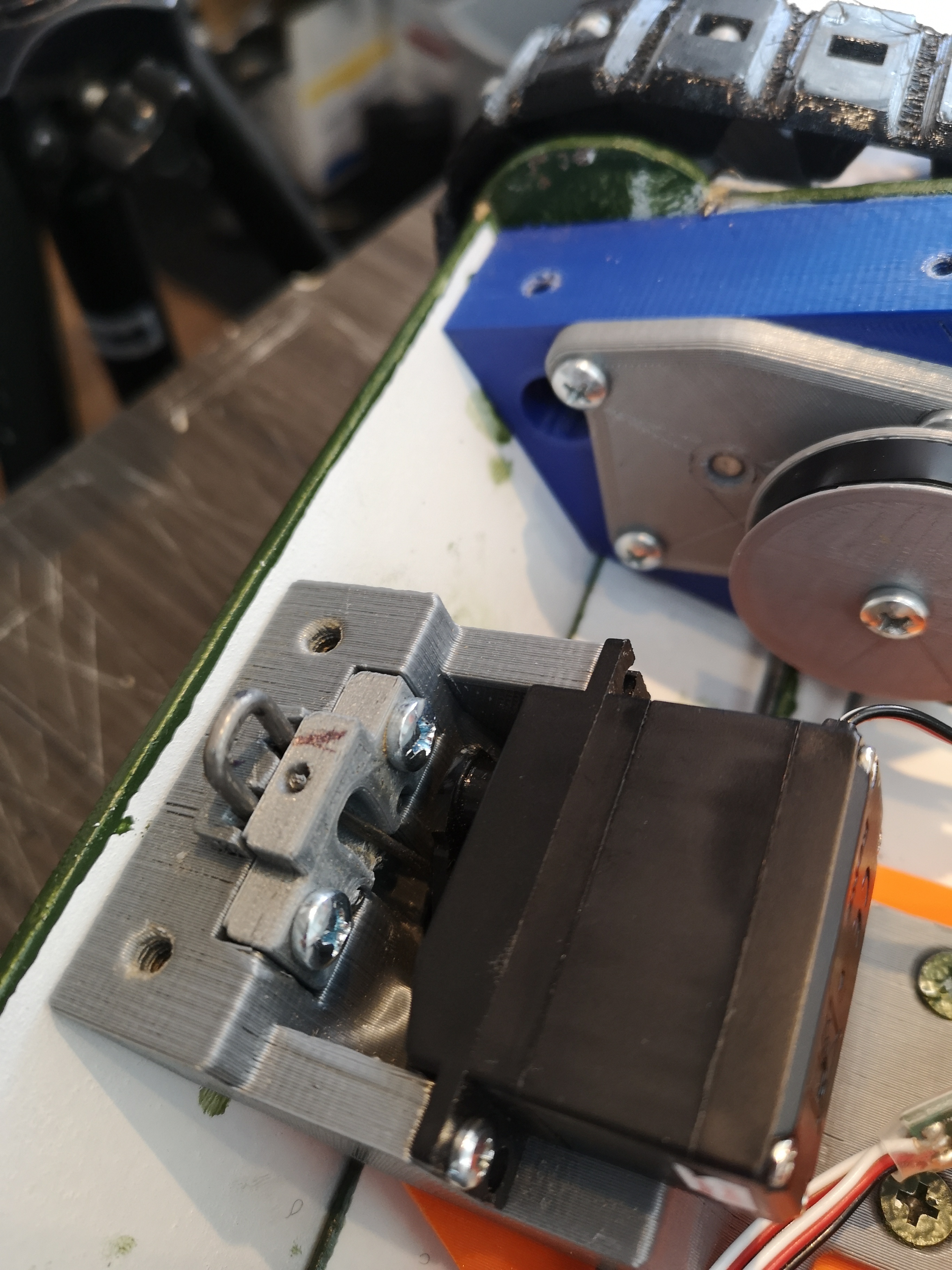 #14
For the wings and tail, I wanted to make a dropping system where after landing, you flip a switch and drop the entire wing and tail block.

To do that I had a fix dowel in the back and a laching system.

A 3D printed bracket will be assemble in the tail booms that will do the job of renforce the joint with the tank.

I built a small lever system for pushing in and out a locking pin. I did that to make sure that the servos will be strong enougth for pulling the pin in with the weigth of the entire wing set!

So when release, the tail is suppose to flip up on the pivot on the dowel and with a little drive of the tank foward, dropping of the the tank and let it go fighting!

#15
I got a bit bored to built back the tank so I did something else!!!

Remember this is the final goal here! 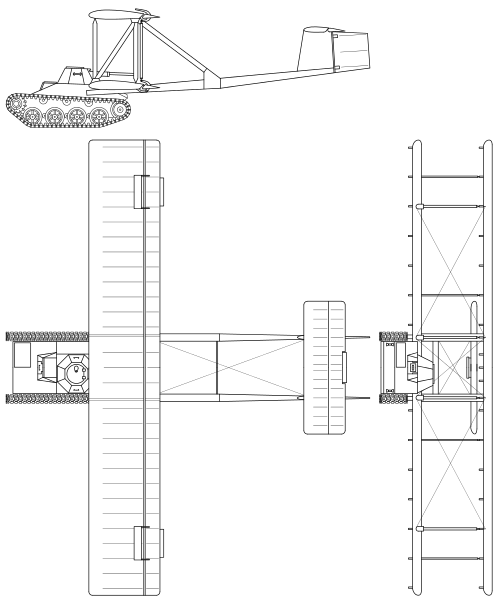 And now I got the tail mostly done! ROSS Foamboard ! Nice and Easy just like any FliteTest airplane! 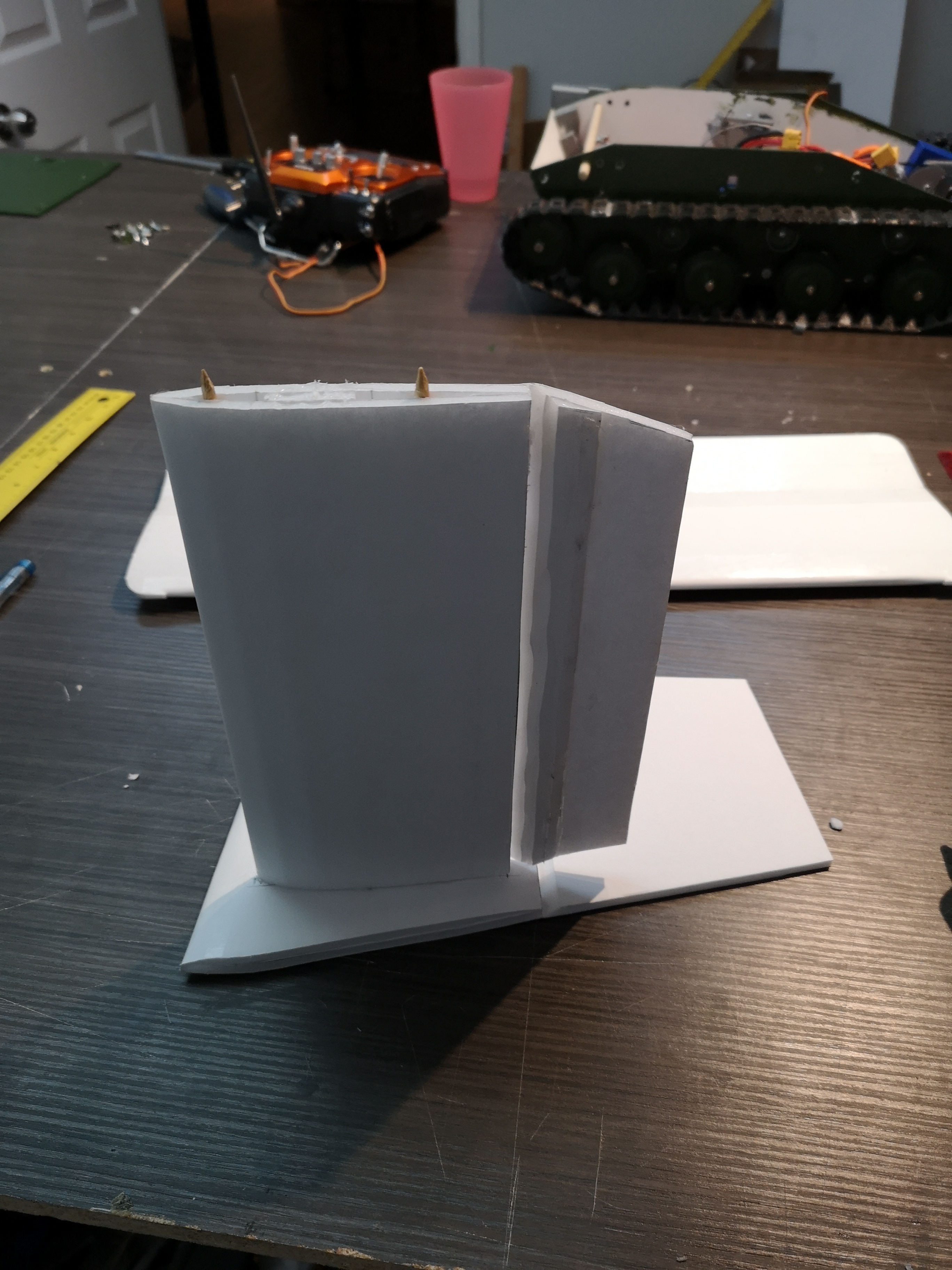 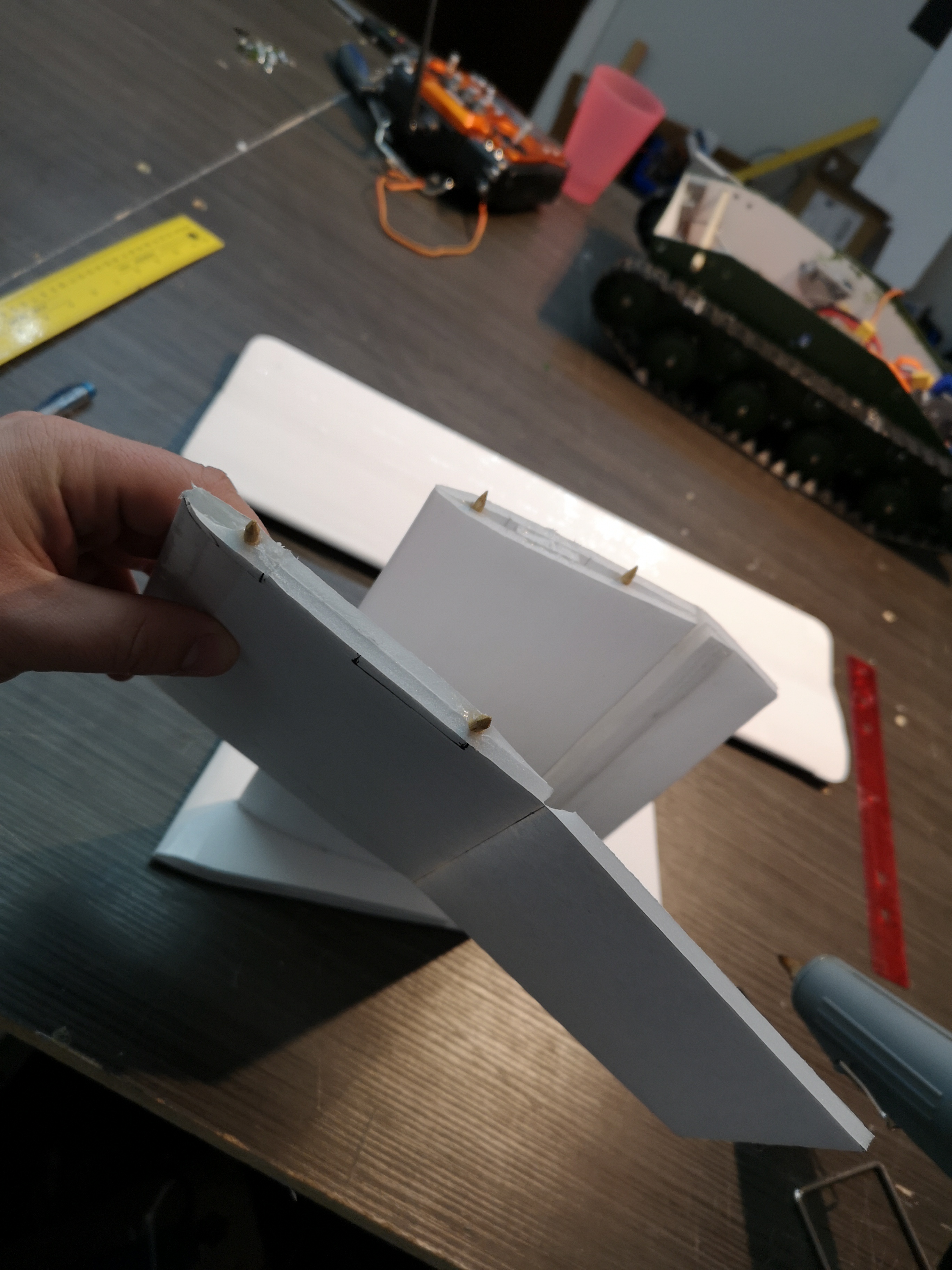 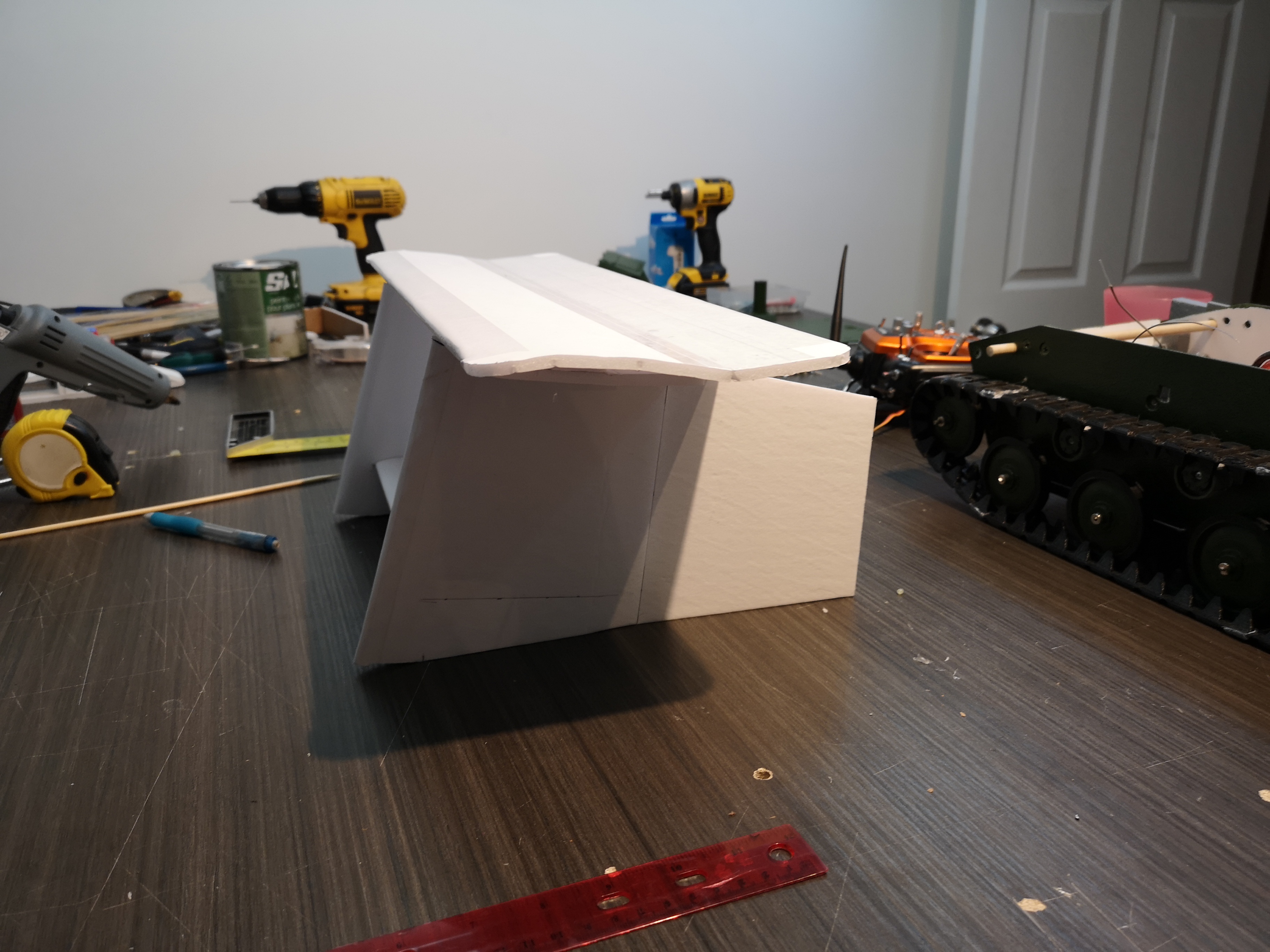 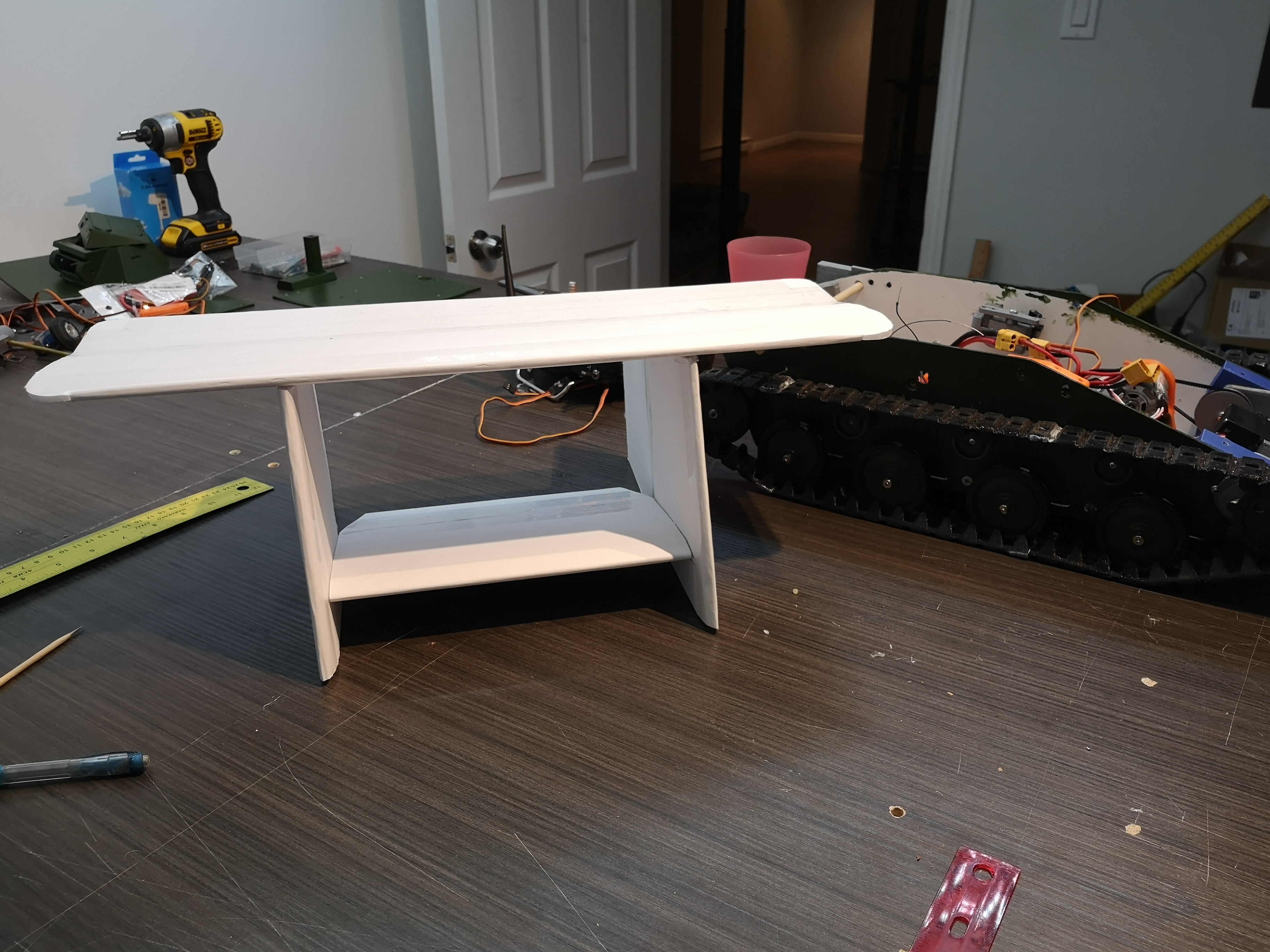 #16
I'm woried about balancing the thing with the kind of heavy tank in the front and the relatively ligth tail, so I try to make the tail end strong and without to much lift... So I made the rear controls surfaces from a symetrical wing shape! BTW for the flying part I'm doing a 3D moke up plans and I trace the measurement down directly on the foam board and I figure things out there..!

Mentor
#17
Man this is looking awesome! Still amazed by all the fiddly bits that make a tank.

You have a pretty long leverage arm so hopefully you won't have to add much in the way of tail weight to balance right. Are you trying to stay true to scale or do you have a bit of wiggle room in the placement of the wing on the tank?

Keep up the great work!

#18
wilmracer said:
Are you trying to stay true to scale or do you have a bit of wiggle room in the placement of the wing on the tank?
Click to expand...
That is a very good question! I have been thinking about that for a couple of weeks now and there is a big probleme with the design of the flying tank... The way the drawing seem to get the wing CG(red lign) is way back on the tank... And real infos or plans of the tank are sparse so it's very hard to confirm. But if it was the was the drwing show, the leverage of the tail would make the tank lean back almost to make the tail touch the ground(red arrow) since the center of mass would be way behind the suspension.

So to get arround that I will try to a lign the wing CG to the middle of the 2 rear road wheels(green lign).

If i't not enought to keep the tail from dragging in the ground I migth put some sort of lock on the suspension travel of the rear torsion bar in an attempt to keep the tank relatively level and if that doesn't work I will built wheeled arms just like on a dragster...!

Less to the scale but fonctionable.

For the balance of the tank the weigth is mostly in the front so we will see I guest how it will turn to balance that! The CG change will help but no idea how it will turn out...!
Last edited: Mar 27, 2019

#19
Humm... I found those 2 ''historical'' picture of the thing... But with the internet today you can never be sure...! But it feature a coupke of real thing like in exemple the fact that they had to remove the turret for test fligth since they where pretty sure that it would be too heavy.

And you can clearly see the tank leaning back because of the CG problem of the design! 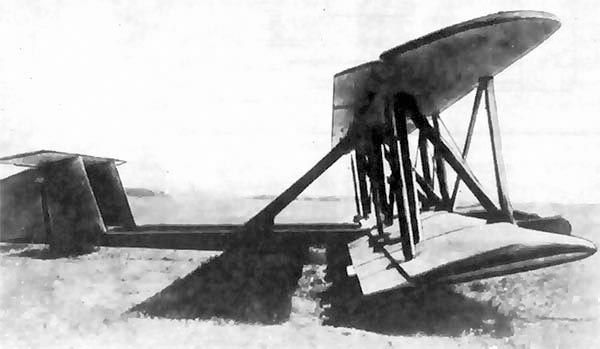 #20
In any case anybody want to know more about this event(back in WWII) here is a very good article I found in my recent research on the CG problem..!

Fun to know that It was John Walter Christie (crazy engineer, because apparently he was a realy weird caracter!) that had the idea to built that with is vision of fast ligth tank that you could remove the track and roll faster on wheels with some strange coil spring suspension... The USA thougth it was crazy and finaly the russian bougth the design and that lead up to the BT series tanks(that was almost an exact copy of is design). More so, the suspension made it's way to the well known T-34 tanks and also for some more weird reasons in a lot of the british cruiser tanks designs(cromwell and comet tanks mainly)