#1
I am looking into the idea of building a huge RC plane out of foamboard. HUGE. From what I've seen, foamboard can fly some pretty crazy stuff, like a Ran D. St. Claire plane I can't find currently that is like a bunch of smaller planes linked at the wingtip. I think it was at least 15 feet long. Or the tank plane made by FT which I can't imagine was very light. Obviously there is a big difference between 40 and 15 feet but I'd still like to hear everyones thoughts.

Mentor
#2
With enough power and selection of spar materials, I don't see why not. Won't be easy but thay shouldn't put you off the ideas. What model of plane were you thinking of building.
Last edited: Feb 1, 2019

Mentor
#3
DamoRC said:
With enough power and selection of spar materials, I don't see why not. Won't be easy but thay shouldn't put you off the ideas. What model of plane were you thinking of building.
Click to expand...
Both very valid points. 40' is doable, but it's going to require quite a lot of outside the box thinking. I would recommend a lot of external bracing as I don't think a cantilever wing is feasible with foam board at that scale.

#4
I saw a youtube vid on this idea, it was somehwere around 10 mustanges wingtip to wingtip... go for it. if I find it I will edit this with a link.

#5
Right, so imma edit the heck out of this post because it wasnt nearly as complete as i wanted it.

To start with, a plane at the 40' span is definitely possible, but you're probably going to have a LOT of issues keeping the weight down. Just as an example, I'm in the process of designing an 18' model of a b-36 right now. This plane has everything going for it, a simple fuselage, an airfoil thats super thick to the point i can minimize spar material. I'm targeting an AUW at or under 55lbs, and i should be close but make it. Because when you break that down, its about 10lbs per wing, about 10 for the fuselage, add 5 for tailfeathers, and the rest is going to be motors (6lbs), batteries (8lbs), props, payload, etc. So if you want to do something 40' i would say the option to best stay as far away from the AMA is to stay away from a full-sized copy, i.e. make a Cessna 172. Either do some tip join aircraft or something like the Helios. 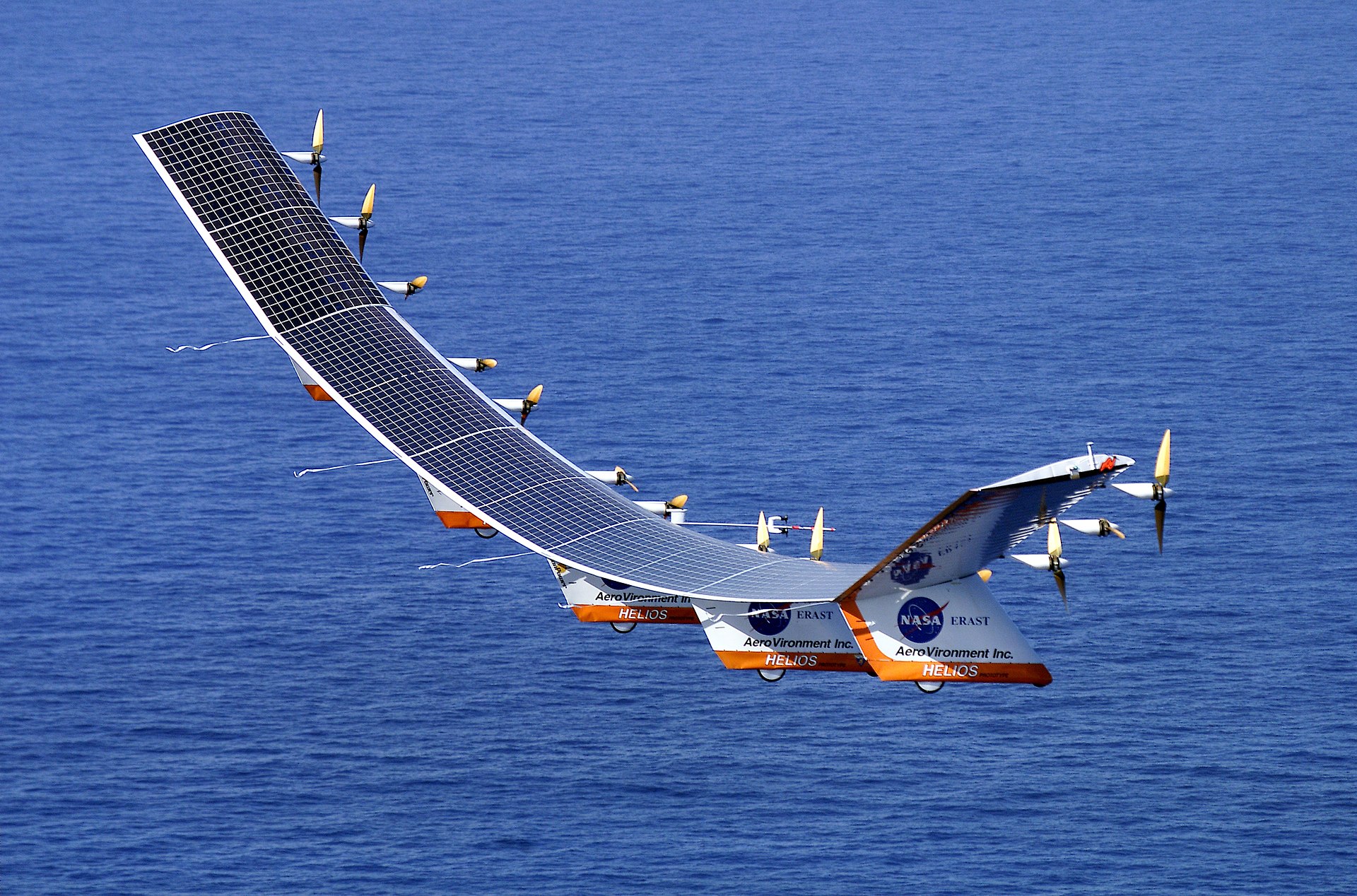 And to be honest, i'd strongly lean towards helios for one reason: wing thickness. I'm sure you saw how the Flex 9...well, flexed
Guy's flying this thing hard as he can, and this plane is doing all sorts of squirrely stuff. Flex doesn't just mean wing dihedral, it also can mean asymmetrical angle of attack, which means you can wind up with uncontrolled control movement, and, in extremes, areas where parts of the wing is in a stall where others are not. This is why i wouldn't just go gluing planes together, its all about leverage. A plane is , ideally, designed to handle the stresses that one aircraft can exert, including multiple G's from high bank angle, turbulence, etc. The problem is when you tape a bunch of planes together, you add new factors, including wing spars being exposed to forces at a much greater distance, like a lever. A small force applied to a wingtip can wind up being a massive load on the center aircraft.

On top of all this, lets think logistics here. If you want to do a 40' airplane, you need to get it to point a and point b. If you think that transport and logistics is inconsequencial, be reminded you are endeavoring to build something with a larger wingspan than a Piper Aztec twin-engine aircraft! How are you going to get the aircraft from your house to the airfield? How are you going to get the plane into the air, does it have wheels, or do you have friends that can help you throw it? Once its in the air, how do you land?

If I was doing this, i'd probably do something like the helios. Make a big, 2 or 3' long wing, and give it an appropriately thick airfoil. My inner b-36 project says NACA 63-422 or 420 would be a good candidate, but i'd go talk to some people with experience in flying plank designs. You need a thick airfoil so you can minimize weight for structure and also keep the wing more rigid easily. Then i'd have 2 or 3 fuselages you can attach to the underside that have your powerplants, that or just scatter tiny powerplants all over. If you want to make the fuselages with an elevator and all then i would strongly recommend oversizing the elevator, or better, full flying elevators, and place far back using CF booms alongside rudders sized for the task.
Last edited: Feb 1, 2019
C

#6
Thanks guys for the good points.

@DamoRC Yes. I figure it won't be easy. I was originally thinking of a powered sailplane design so I could fly slow and minimize materials costs and weight, but I'm now thinking that it would be difficult to make a skinny wing like that very strong especially with all the weight suspended in the middle. As Akimboblueguns pointed out, external bracing is probably going to be needed. My newest thought is to build something like the Rutan Voyager. this would distribute the weight better throughout the wing which in my brain means less spar material needed, especially in the center joint which a plane this size would definitely need.

@AkimboGlueGuns : Yep thanks. I figured this would entail some outside the box thinking. I'll look into that.

@b-29er thank you for all the input! As for weight, I think you are right. I don't really want to make it very conventional. The Voyager is mostly wing, plus it's got a canard. No horizontal stabs. I think it fits pretty well in your criteria there. You are right, now that I see it again the flex 9 does look a little sketchy. We will have to see where this goes. As for logistics, I thank you those are all good points. I won't be making the plane alone, and my friend who is helping me build has a 20 foot horse trailer. I think it will serve us to get our plane bits where-ever we go (The wing will be cut into at least 2 sections) so I'm not too worried about that. Also I live in Alaska and a few hours north of me there is lots of tundra with no people or anything really for miles and miles around so I believe flying space isn't going to be a problem either. I'm still not sure about take off and landing. Throwing could work for take off but landing would be interesting. We may have to make some sort of roll-out runway. Those are very alaskan anyhow. Thanks for all the design input!

#7
Voyager is a good place to start, especially if you want a slooow flyer, and it gives you a lot more flexibility on the airfoil type as it doesn't need to be a specialized wing-only undercamber airfoil. I wouldn't follow it like the bible though, as you'll run into trouble if you want to make your wings that narrow at the tips.

If you really want to go for this, i'd look into some full-size design techniques, and keep it as simple as you can. Create one airfoil, and use it for your whole wing, i.e. make a hershey bar wing, no taper, no complexity, just one airfoil design thats easy to cut, then mass produce out of foamboard, probably 1/2" or DTFB. Make the ribs (the airfoil sections) so they fit between the spars, under no circumstance do you want to break or weaken the spars at an airfoil section. I'd have two spars, one fore and aft by about 15-20% of the highest point of the wing, and cut their weight down as much as possible. My first design was to use balsa wood as a core to keep weight down, and use home depot rulers as the top and bottom. Sounds/may be stupid, but they were 1lb for a 9ft wing (*2 per wing) but were quite strong. I'd stay away from plywoods, just because you have half of your grain going the wrong way, which is the part you want parallel to the wing length. You can use square rod if you want, my only concern is a lot of times i see pieces with a good bend, so you'd need to be sure the stuff you're getting isn't imparting a bend. I'd also invest in a gallon of wood glue, and some gorilla glue.You can cover your wing with DTFB or FTFB, though i'd recommend either removing the paper on one side and making that the spars/ribs glue to the foam.

I'd strongly recommend building a 1' section of the wing to start off with, see how much it weighs. If it weighs anything more than 1lb i'd go back to the drawing board and figure out where you can remove weight, and try again.

On the horse trailer, awesome. I'd break this wing in as few pieces as you can, 2, maybe 3 max if you can help it. Any break is either going to be a place of weakness or excess weight or both.

Oh, i'd start looking around for some big motors. The motors i'm using on my b-36, 5055 brushless motors, can be had pretty cheap, i found my last set on hobbyking for $20 a pop, and they put out about 6kg of thrust in the right conditions. Go big and slow on your prop, keep the pitch low, but keep the diameter high so you get a lot of thrust at high efficiency. some 6s lipos and escs are also on the to-do list. If you get a choice, keep the kv low on the motors. Lower kv tends to mean higher torque, which means bigger props.

good luck, and if you need design help, just let me know.
C

#8
Alright thanks. I will look in to all those points. I'll start a build log or something on here soon.

#9
Just a thought on jointed wings, If you use a single joint line, (cordwise), there is great need for spar joint and wing structural strength at the area around the joint, whereas if you have a stepped wing joining area on a dual spar wing then the torsional forces on each wing joint ar partially lessened by the asymmetrical nature of the joint around the spar joining areas.

In other words if the front spar joint does not align with the rear spar joint, (cordwise), then the joined spar is stabilized by the rigid nature of the other spar which is not jointed in the same area or point spanwise.

It is possible to design a segmented wing with only a little increase in weight if proper structural techniques and principles are utilized or applied. The inclusion of tertiary sub-spars can really increase joint strength and decrease chances of incidence angle changes simply and markedly.

Just a few thoughts on wing joint structure and strength!