#1
i was out at the field a few weeks ago and a fellow member came out and had a micro that he had set-up for fpv. he is much more of a drone guy and after a few failed attempts he tossed me the plane and the camera and said have fun.

i have always wanted to fly fpv but never have due to many reasons. after this offer i couldn't help myself.

first thing i did was design and print a camera mount, then go about fixing an old self designed plane.

i had built this wal-mart carbon arrow flyer awhile ago and it was originally fitted with micro EDF's. it flew but wasn't tickling my funny bone. i decided to strip the EDF's and fit two A-packs with a 6045 props counter rotating, 2x 12a esc's, 3S-1300mah, and programmed with differential thrust (aircraft has no rudders). i designed and 3D printed the joints for the arrow lattice, as well as the firewalls, control horns, and camera mount.

so 2 weekends i took it out to the field and did LOS flying only, basically giving others a ride using the goggles and a screen from another member. to say it was a hit would be an understatement.

last weekend i tried my first attempt at flying with the goggles using a buddy box set-up. the plan was for me to take off, get to altitude, pass control off while i got my goggles on, then take back over. well that lasted about 5 secs. not sure what happened but plane was completely out of control and face planted into the ground almost immediatly after take off.

this weekend i decide to just buck up and go for it. on saturday i throttled up and got a hand launch, the first 2 secs were crazy. i had no idea where i was or what was going to happen. i was sure i was goonna crash. then i got oriented and boom, we were off. i did about 2 mins of just flying around getting used to things, then i started prepping for landing. i did multiple approaches until i finally brought it back in clean. to say it was the most intense flying i have done in a long while would be an understatement. i thanked my friends and was tickled to pick up the plane off the runways in 1 piece.

today the plan was to improve and that we did. we solved the sketchy launch issue by backing off throttle. by the 3rd launch it was no issue at all. we also got the elevation and alignment issues figured out. yes, i did crash 1 time, but immediately threw the plane back into the air. proof of my design and it's toughness i guess. it aint pretty but it flies like a dream. 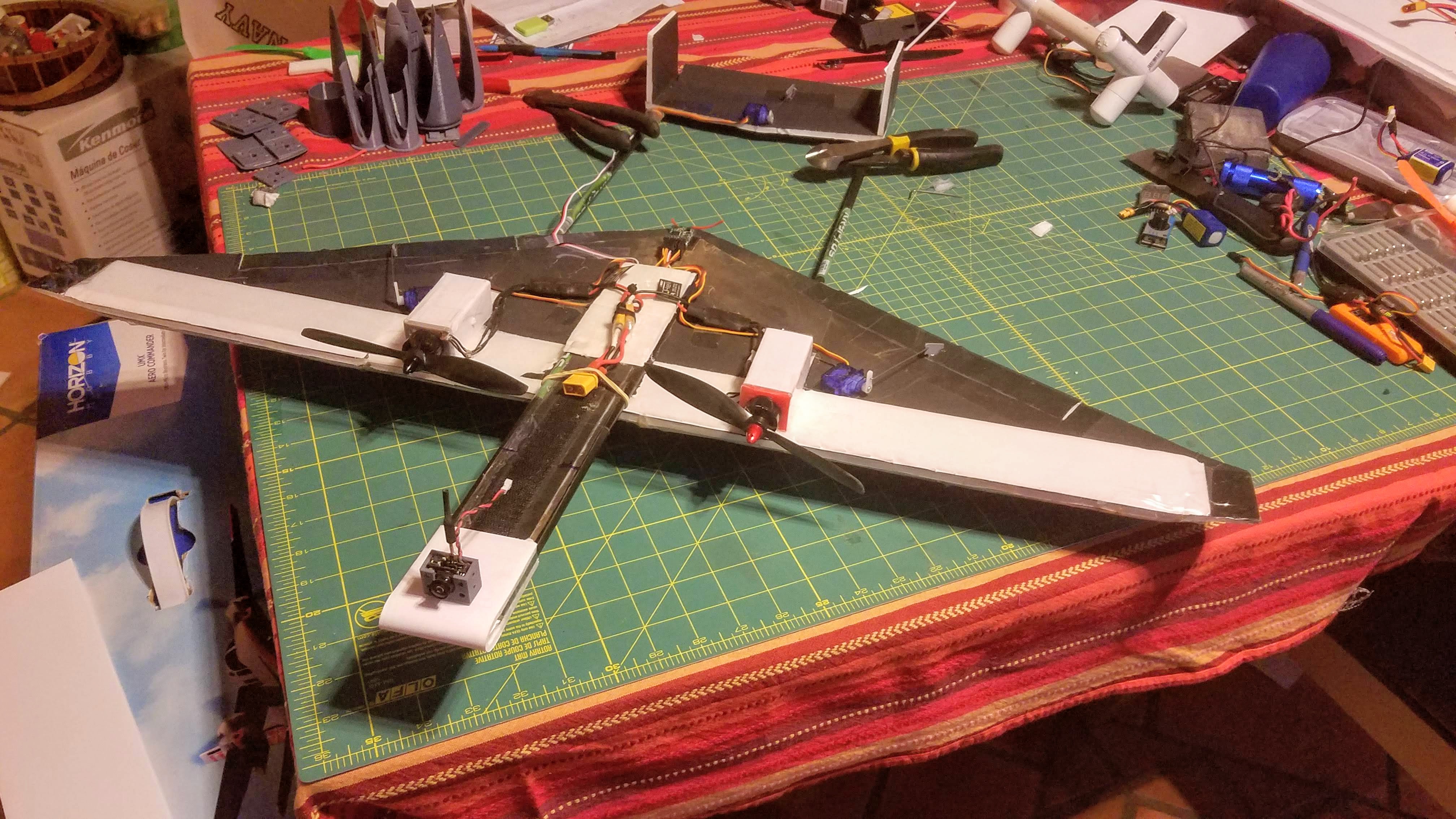 anyways, can't wait for more of this. i am hooked.

Mentor
#2
Nice story and glad to hear it worked out well. I have some fpv gear but have only tried it on a diy quad - but it was fun. I want to put it on a plane now. Maybe a mini arrow or the FT Edge. Any tips based on what you learned from your experience?

#3
Wings are good for FPV because of the simplicity, but any wind and they bobble around a lot. A plane with a tail is more stable.

my biggest issue was I had no perspective on either launch or landing. I started @ 5 degree but just printed a 8 degree.

it was also surprising how easy it was to loose site of field. I was very glad I had someone next to me the whole time that was able to tell me where I was. I know my field and surrounding area quite well and have lots of video footage off it. It did not help. I had to ask for orientation 3 times, w/o it would have been ugly.

other than that, have fun and go for it. find a cheap, crashable plane with good front sight and go fly.

from what I know of u and your kid, u will be fine. 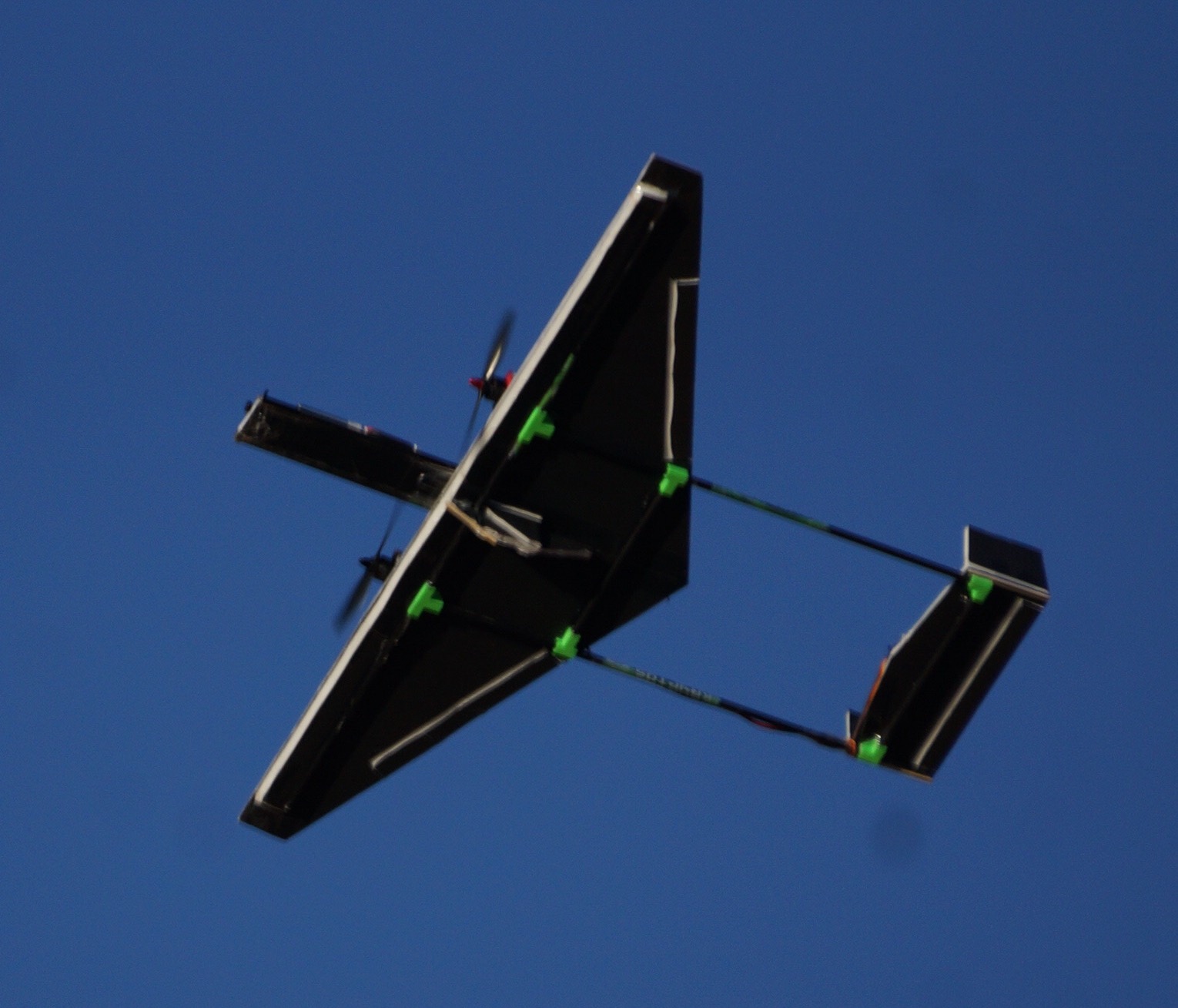 next design will have motors more outboard, more wing, and less sweep.

#6
well it was an interesting day.

i now had 3 solo FPV flites under my belt and was feeling pretty good. my aircraft had proven solid, and i had printed a new 8 degree cam mount.

first flight of the day started w perfect launch but i immediatly began to have reception issues. my screen kept blacking out and having issues. i was able to quickly bring it around and put it back onto the field.

a quick inspection showed nothing, so we changed to a new frequency. this seemed to solve the problem, screen was clear. we relaunched and i flew a pretty uneventful 4 mins and came in for a mid field landing.

after that i flew several other batteries through a couple other planes in prep for second flite.

second launch is just as uneventful. easy climb into the sky with a perfect view. i did several passes across and down field. a few of them inverted, just testing my response and the new camera angle. all was perfect....

as i was coming on a a S to N pass down field my googles went to "snow" and i had nothing. i yelled for help to remove goggles from my spotter and applied a slight up elevator based upon my last memory.

what seemed like an eternity later, i had the goggles pulled off just as i heard a very profound "thud."

now i was a little worried. when u crash, you normally have some direction, some perspective to the distance, something, that will help you find the plane. i had nothing other than i was heading north. that leaves a lot to be desired when hunting for a downed plane.

from my last memory of flight i was at the end of the field about 40ft, and heading north. to the left is a huge, thick, nasty mesquite grove, the right a labyrinth of creosote bushes. i was not optimistic for a quick find.

thankfully as we walked out the entrance to the field heading north, my friend spotted the craft just south in the middle of the dirt road, what we ofter refer to as the "alternate" runway.

plane was in pieces. the carbon arrow shafts had done their job and were solid and the 3D printed joints were the failure points. one motor pod was off, both props broke, and upper fuselage ripped off. sorry, did not get a pic.

anyways, this really woke me up to the possible dangers of this. i am very lucky that my craft was heading aways from danger and ended up in the middle of the road. i will do everything i can to make sure this never happens again.

when i got home and started looking a the craft i thought i would just be able to print new pods and go from there. instead it wasn't so simple. the entire rear boom was removed and both main spar mounts had bust but were still firmly mounted to the main wing. i decided instead of trying to reprint and rebuild, i would just re-glue.

the carbon arrows were perfect, so i grabbed some A/B epoxy and went to work. within 30 mins of work i had the plane back together, along with a thought for a new, bigger, slower, more aerobatic version. we will see.

anyways, all fixed and new 200mW fpv cam with 8 degree mount installed. don't mind the mess, this was one of many subjects on the table today... 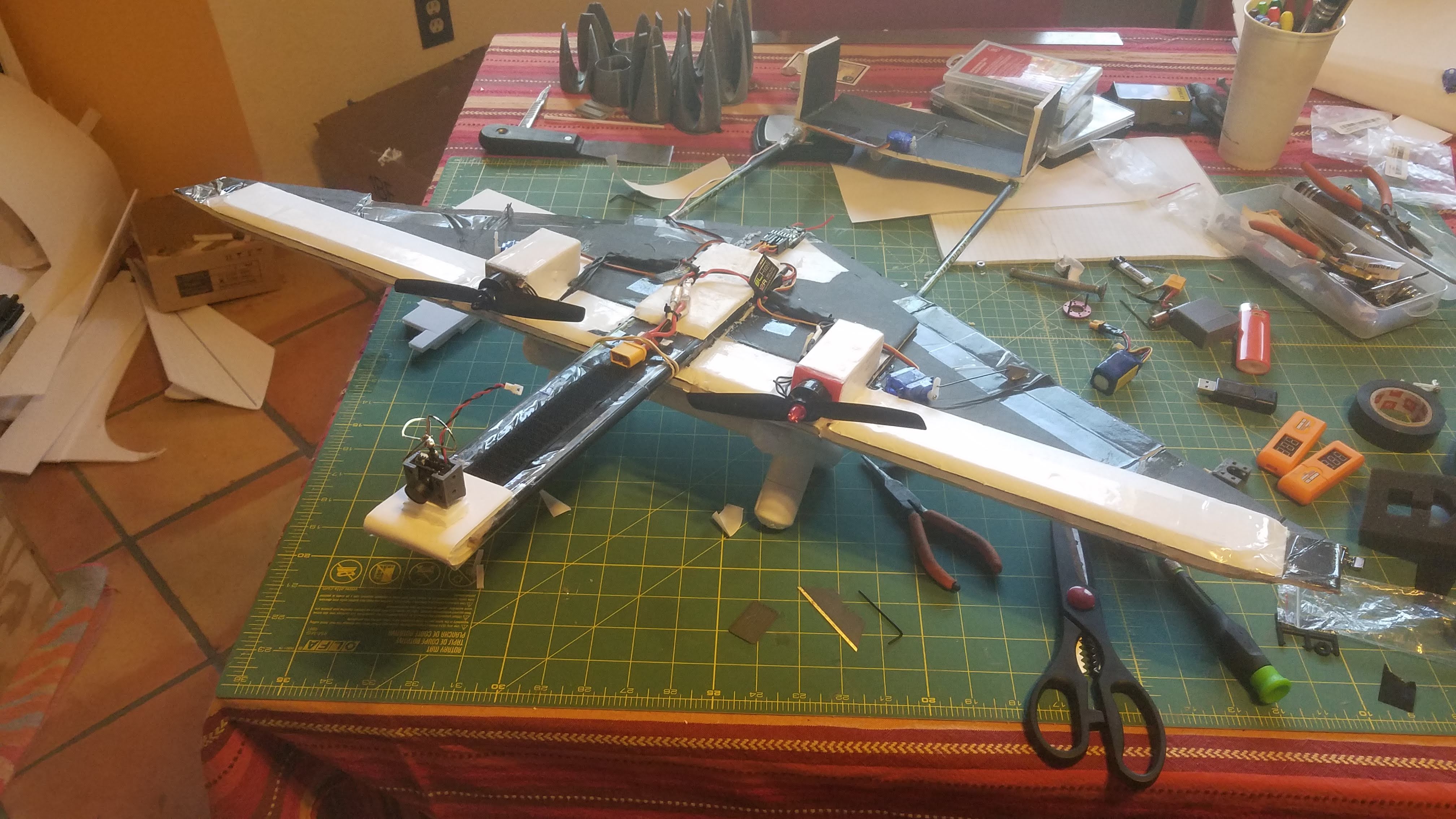 very interesting day with much more to learn.

#7
so, i have had many more flights and maybe a crash or two, but so far the plane as take everything i can throw at it.

today we started out with heavy fog, the kind of which i haven't seen in AZ in some time. it was so bad we were basically grounded the first hour at the field this morning. eventually it started to break and us brave pilots took to the air. i really liked the thought of trying to fly in the fog FPV so after a quick warm up flight i grabbed the FPV twin and headed out.

regrettably as soon as i plugged it in and did my pre-flights i notice the left aileron servo had come loose from the foam board from the last crash. i ran and grabbed my battery powered glue gun to make a quick field repair and was met with a broken power wire on the gun. no one else had one so i was forced to stand there holding the loose wire to the connector while the gun warmed up. thankfully it worked but by the time it had the fog had pretty much cleared.

anyways, i could still fly so it was all good.

launched and started flying. view was perfect, nice crisp morning with the sun now shining clearly. plane was flying good and all seemed fine. i did a few passes up high then started dropping down in altitude. all was good and i was doing low, inverted passes, rolls, loops, and then...

i'm still a little confused how i let myself get so out of orientation, but i went into a loop and started to roll out and the ground was all i could see. an instant later i went face first into the ground.

i thought for sure this would not only be the end of plane but my camera as well since i knew i went hard nose first into the dirt.

thankfully due to the recent rain and continued damp weather from the fog, the ground was very soft.

this is what i found at the crash site. 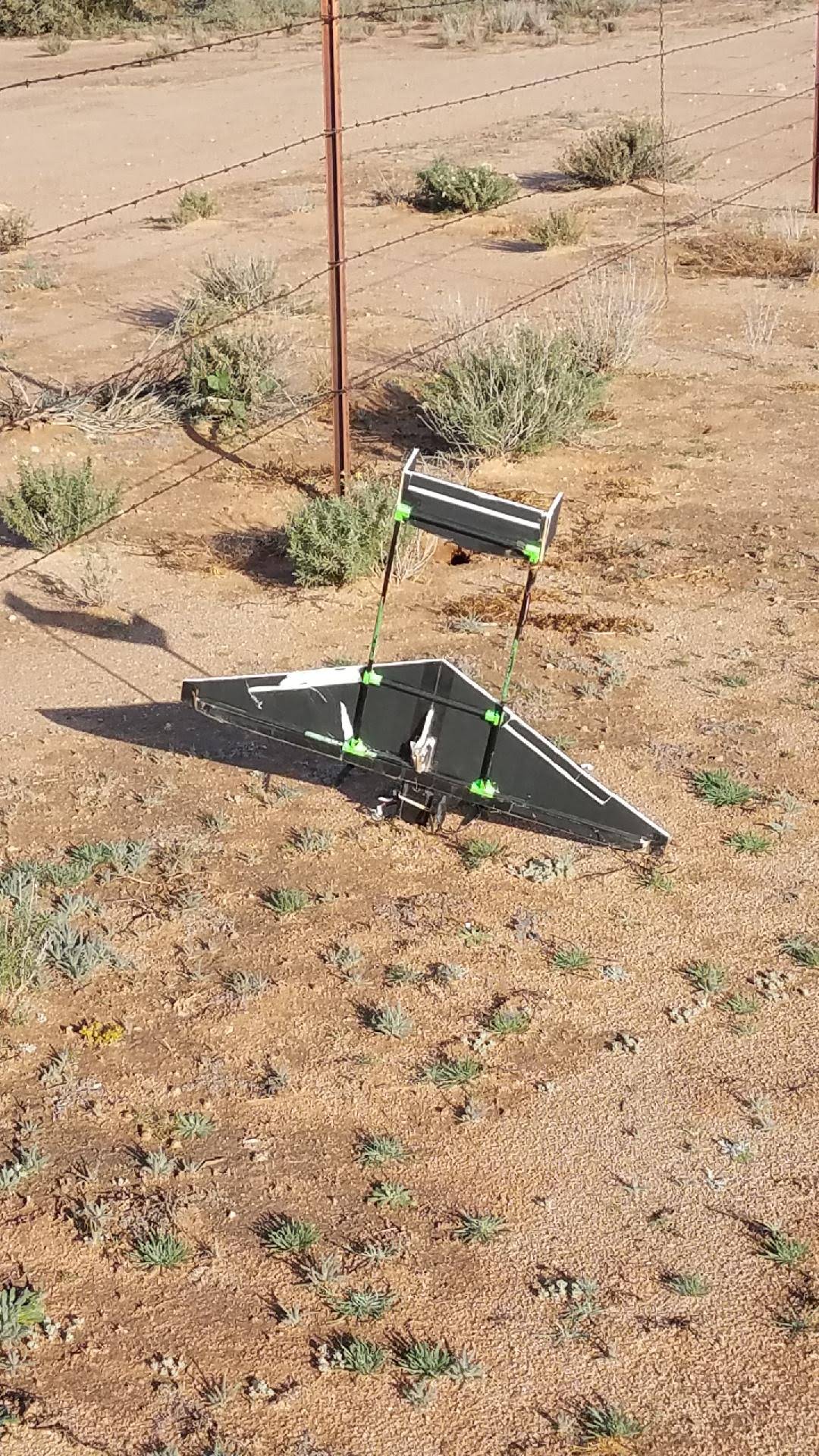 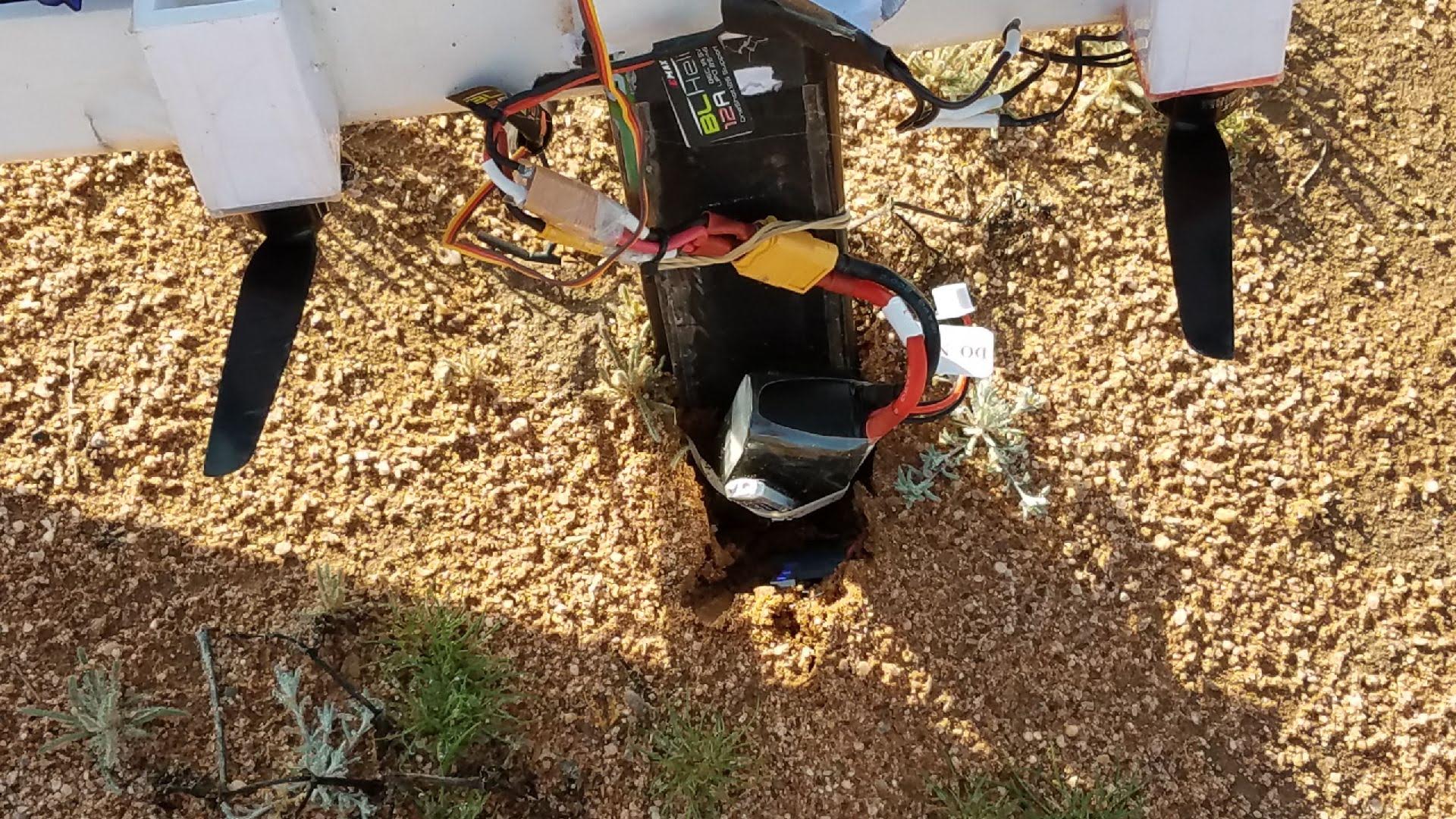 it was buried at least 6 inches into the dirt. perfect lawn dart landing! other than some minor damage everything was fine. camera was pulled out of the mud and cleaned off. a little hot glue and it will fly again. frankly i am amazed. this plane had crashed and been glued, epoxied, and taped back together multiple times but the carbon arrow shafts will not die.

funniest part was my reaction when i put it in, i really did feel like i was in the plane and things were about to go really bad. i think i even jumped like i was about to die when it hit. then the screen went to snow and i remembered i wasn't actually on the airplane.

#8
It is a journey isn`t it...but one heck of a lot of fun and ride. I started my first FPV plane with the Versa Blunt Nose had plenty of room for stuff and almost indestructible. My first flights were about the same buddy boxed with my nephew and it worked out great.
You must log in or register to reply here.
Share: Facebook Twitter Google+ Reddit Pinterest Tumblr WhatsApp Email Link
Menu
Log in
Register