#41
That's weird did it happen as soon as you plugged it in, or when you tried to spool up the motor?

#42
Grifflyer said:
That's weird did it happen as soon as you plugged it in, or when you tried to spool up the motor?
Click to expand...
It was as soon as I plugged it in. No beeps or anything. I fortunately was holding onto the plane such that the esc was in my field of view (I have it mounted in the nacell) and noticed it right away.

#43
That smell is the worst! As soon as I saw the photo, I could smell it!

On the control wires, did you remove (shunt) one of the power leads?
If you had both BECs going it might have overloaded...

#44
So.... I JUST realized the EDFs I bought fit nearly perfectly in a pringles can!!!!
Nacelles DONE!

#45
Hmm, all I can think off is that your motor wires are touching somewhere I've had an esc smoke when my bullet connectors touched.

#46
kilroy07 said:
So.... I JUST realized the EDFs I bought fit nearly perfectly in a pringles can!!!!
Nacelles DONE!
View attachment 119353
Click to expand...
are those the EDFs that were on sale in september? i still have 2 of those lying arround.

On the control wires, did you remove (shunt) one of the power leads?
If you had both BECs going it might have overloaded...
Click to expand...
I had removed one of the wires, but I need to tear the plane apart a bit more to see which esc I had pulled it from.

Grifflyer said:
Hmm, all I can think off is that your motor wires are touching somewhere I've had an esc smoke when my bullet connectors touched.
Click to expand...
I had one of my buddies solder everything together. So though it may be possible, it is unlikly.

I had this happen last year with another 12esc. That one was hooked up to an A pack motor. I had taped all the connections on that. As soon as I plugged the battery in smoke appeared. The motor didnt fuse in that one, but it never ran right after.

#48
JTarmstr said:
are those the EDFs that were on sale in september? i still have 2 of those lying arround.
Click to expand...
yup!!

Horseman3381 said:
I had this happen last year with another 12esc.
Click to expand...
Were these branded ESCs?

Are you using a distribution board or just wired together?... I suspect a short somewhere, the hard part is trying to find out where.

Man, this sucks! I was really looking forward to your maiden!!


Were these branded ESCs?

Are you using a distribution board or just wired together?... I suspect a short somewhere, the hard part is trying to find out where.

Man, this sucks! I was really looking forward to your maiden!!
Click to expand...
They are the Emax BL Heli that FT sells in their store and is in the powerpacks. I had them wired together, no distribution board. I need to tear the plane apart more to investigate. Hopefully I find an answer.

#50
I had the same thing happen to my motor and esc earlier this year. The screws were touching the motor and without using the motor at all the esc burnt up. Also this is one of those images that you can just smell lol.

#52
Our corporate office is located in Huntsville (AL) and they also have an A-12 (visited it twice now.)

#53
Horseman3381 said:
I have loved the SR-71 Blackbird for as long as I can remember, and have wanted an RC version ever since I started flying. I drew up plans for an twin 80mm version a year ago, but never built is as I was a little to unsure it would fly to invest the time and money into it.

However, recently Ben Harber designed and built a B-52 powered by eight homemade EDF units using a gremlin motor, 1.9" props and 3D printed motor mounts. Check out his forum post HERE for more details. After seeing this it got me thinking, would 2 of these be able to power a foam board SR-71?

I took a 3 view of the SR-71 and scaled it to fit Ben's Gremlin EDF's which left a plane roughly 3'-0" long with a wingspan of 1'-7 1/2". At this scale I though that if I built it "geometrically" it would not need any internal structure, and if fit on 2 sheets of foam board it may be possible. After a few hours of drafting I came up with a set of plans.


Then a few hours of cutting and gluing later...

The plane is surprisingly rigid at this scale. I was torn on weather or not to add rudders, but ultimately opted to make this a bank and yank flyer for now. If during test flights it appears rudders are needed I will add them. The nacelle nose cones are currently removable because I am waiting on motors and ESC's which should arrive tomorrow. I plan to do the initial test flights without them and see how the motors perform. If the cones end up being a permanent fixture during flight I will likely need to cut "cheater holes" in the nacelles to let in extra air (approximately 1 square inch in size). I still need to cut a battery hatch in the plane, but am going to wait till the motors are installed so I know where the battery needs to go and get it cut it in the correct spot.

I was able to do some glide testing with this version to find where the CG should be. It looks to be about 1/4" behind the front of the engine nacelles. An interesting thing I discovered during flight testing is that with this design it has a lifting body effect that causing the plane to stall like it has canards. With the proper CG set I was able to get this glide 30'-40' throwing it horizontally from the ground which has my hopes up that the motors will have enough thrust for it to fly.

All said and done the plane should weight 630 grams. In Ben's testing he said he got 130 grams of thrust per motor. I bought a higher kV version of the motor than he was using (mine are 6,000kV), and I am going to put 5 blade props on it instead of 4 blade. So assuming the motors don't melt I am hoping to get closer to 180 grams of thrust per motor. With that the plane won't have vertical clime capabilities, but will hopefully fly. I am planning to get everything installed and test fly the plane this Friday or Saturday (weather permitting).

#54
I was able to get version 2 with the new motors out for a "Test Flight" this weekend. Unfortunately it did not have enough power to fly. I was however able to get it to cruse under ground effect (As long as I didn't attempt to turn). It also made a good sled cruising across the ice. 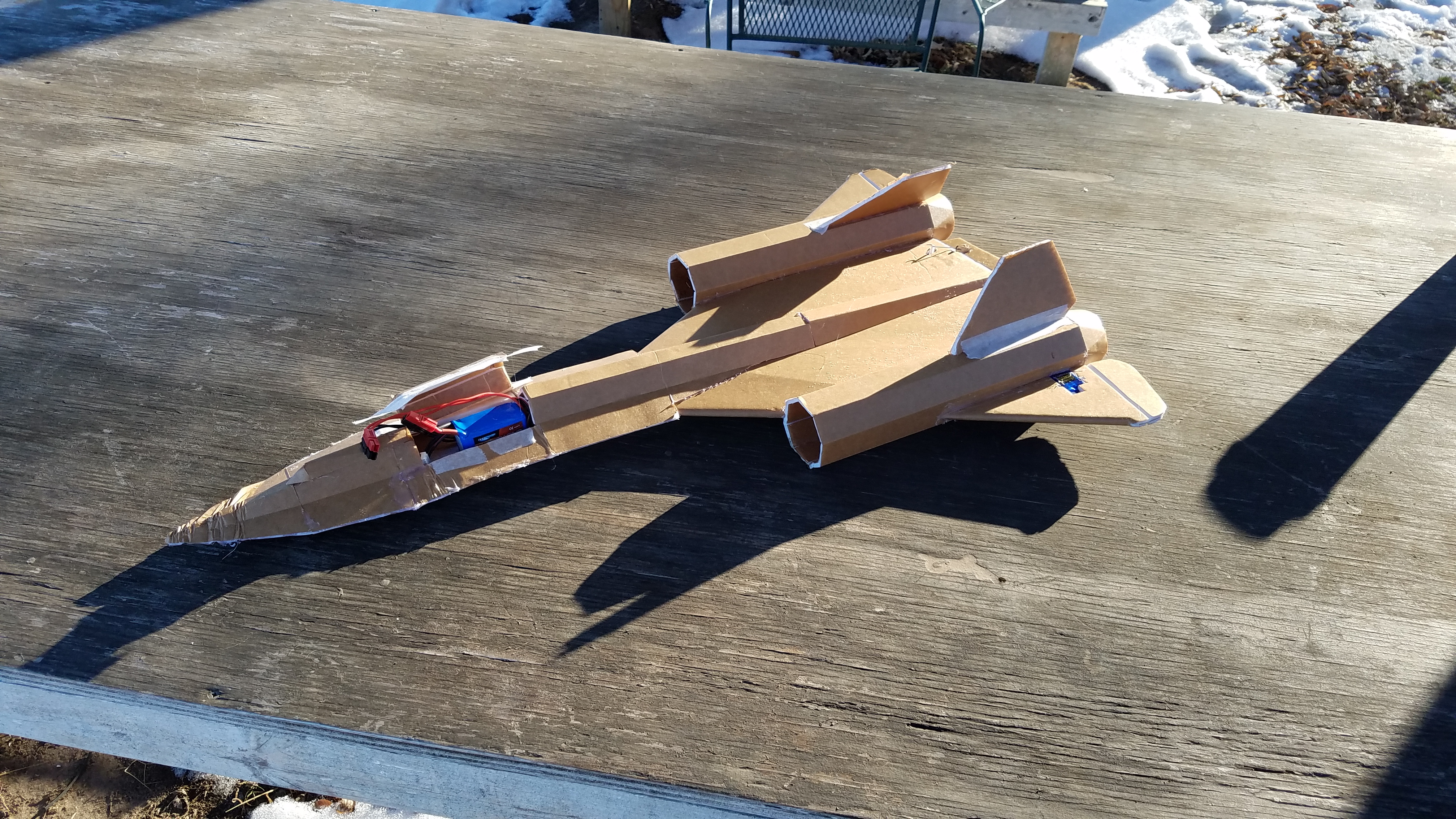 The plane ended up weighing 460g with the battery. The motors were equipped with 1935 5 blade props. The blades are pretty flexible, so I'm not sure that they are giving as much thrust as a prop with fewer blades but more rigidity. Looking at thrust tests others have done it appears that King Kong props tend to give more thrust than other same size props, followed closely by Gemfan's. Both companies make 2045 3 blade props and 2040 4 blade props, so I may buy and do some thrust tests with them. I may also test putting 2 motors in each nacelle with varying props sizes to see what I can get thrust up to.

Along with trying to increase thrust I have identified some options in construction that I am hoping will allow me to get the plane down to 360g-380g. These includes:

It will probably be a few weeks before I can get version 3 ready to fly. If I end up doing thrust tests I will be sure to record them and post the results.

I wish I could've gotten out there to see it.

I wish I could've gotten out there to see it.
Click to expand...
I can't wait either!

I was expecting there to be a lot of people out this past weekend with how nice it was, but there was only the same 5 of us both days.

#58
Grifflyer said:
Any progress?
Click to expand...
I apologize of not posting an update sooner.

I was able to get 4 different types of props and test their thrust output on the test rig I built. I used the Emax RSII 1106 4500kv motor, 4s battery and Emax BL Heli 12A ESC. 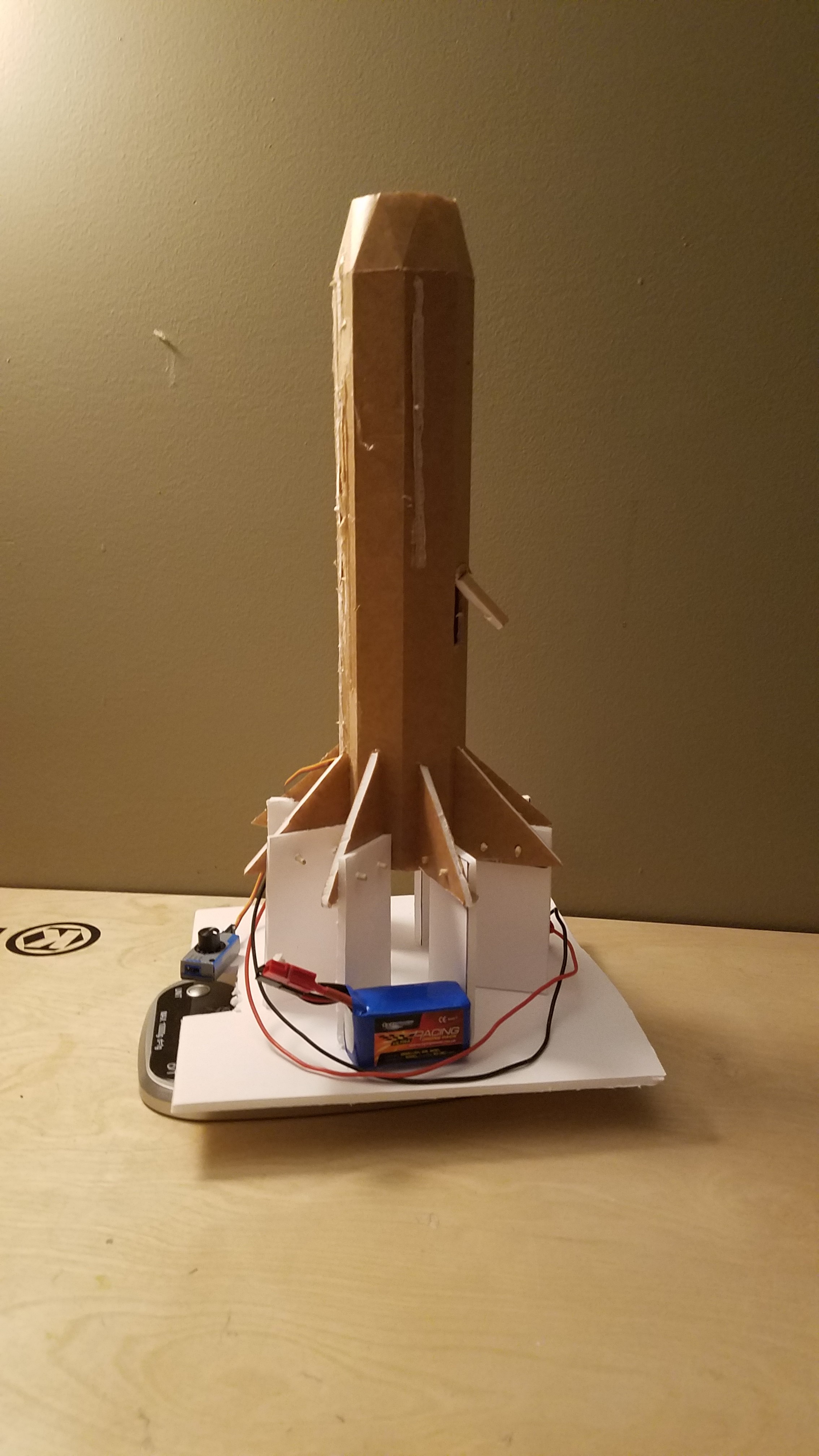 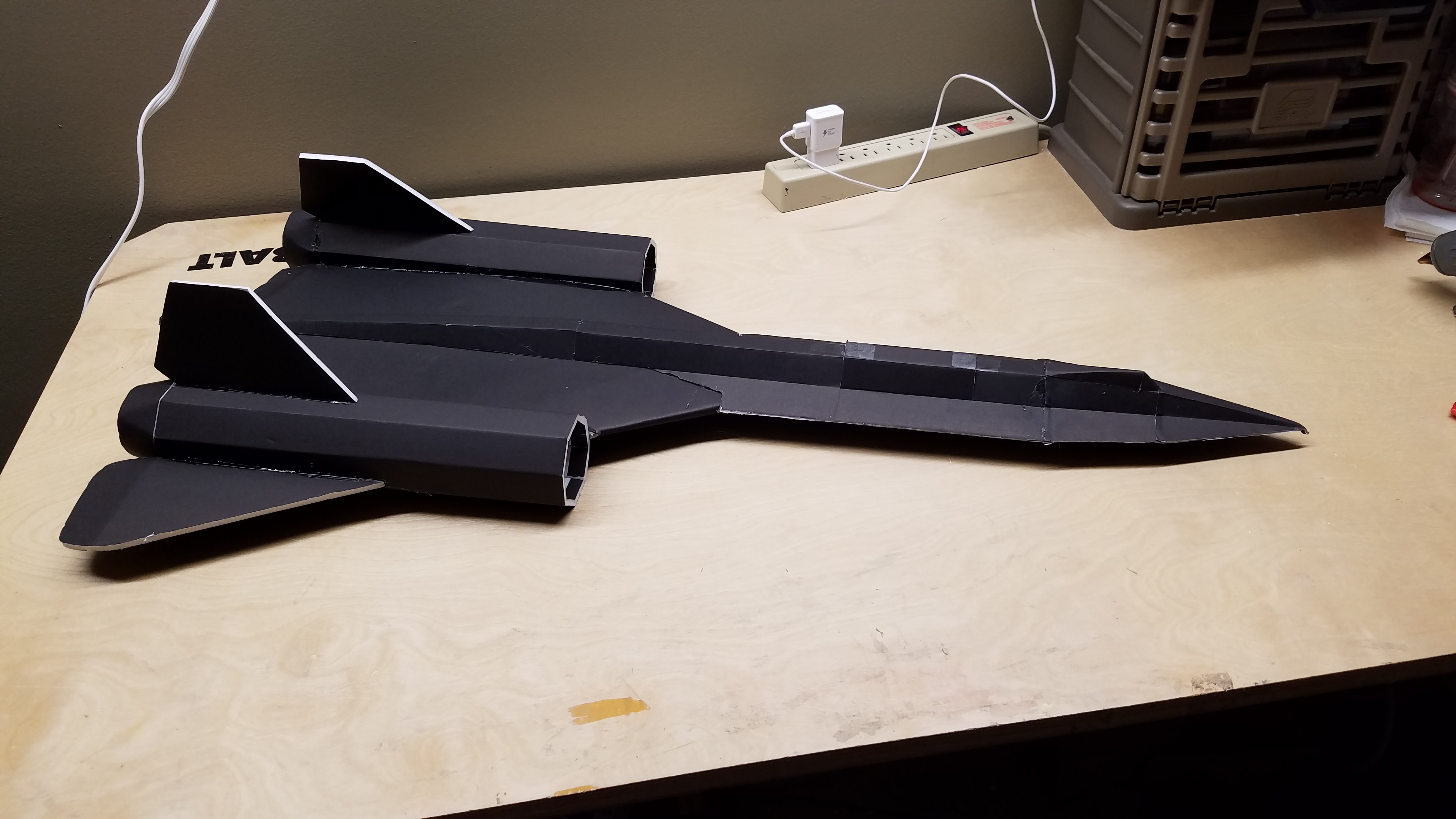 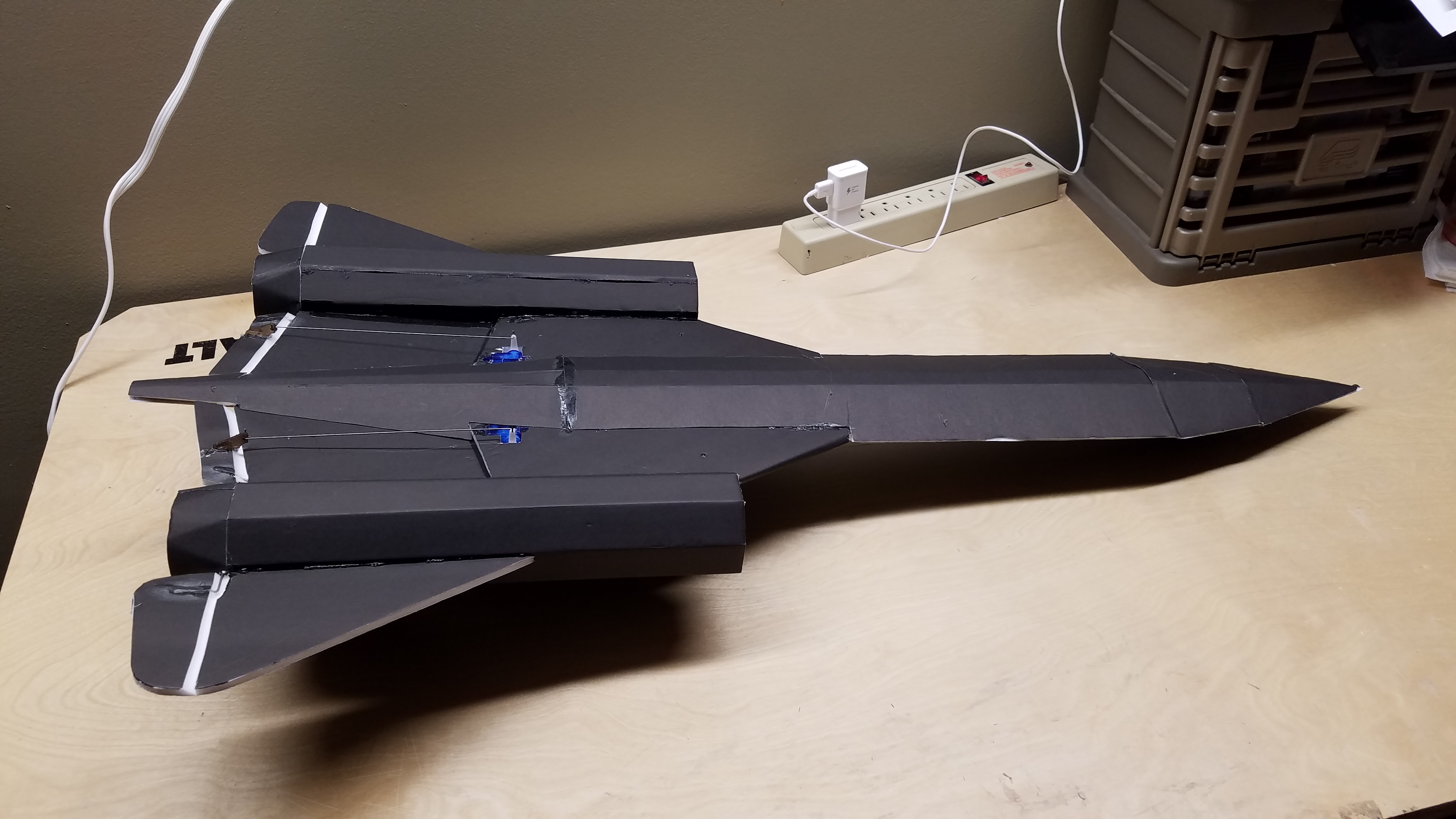 This past weekend I was able to get it out for a test flight and..... things did not go well. After lightening the plane I was still not able to get enough thrust out of it to fly. We were hand launching it, and it may have been that it could not get enough speed to fly before it hit the ground, but it did not want to stay in the air. I thought about building a sled for it in an effort to let it get up speed before trying to lift off, and likely will for future versions. 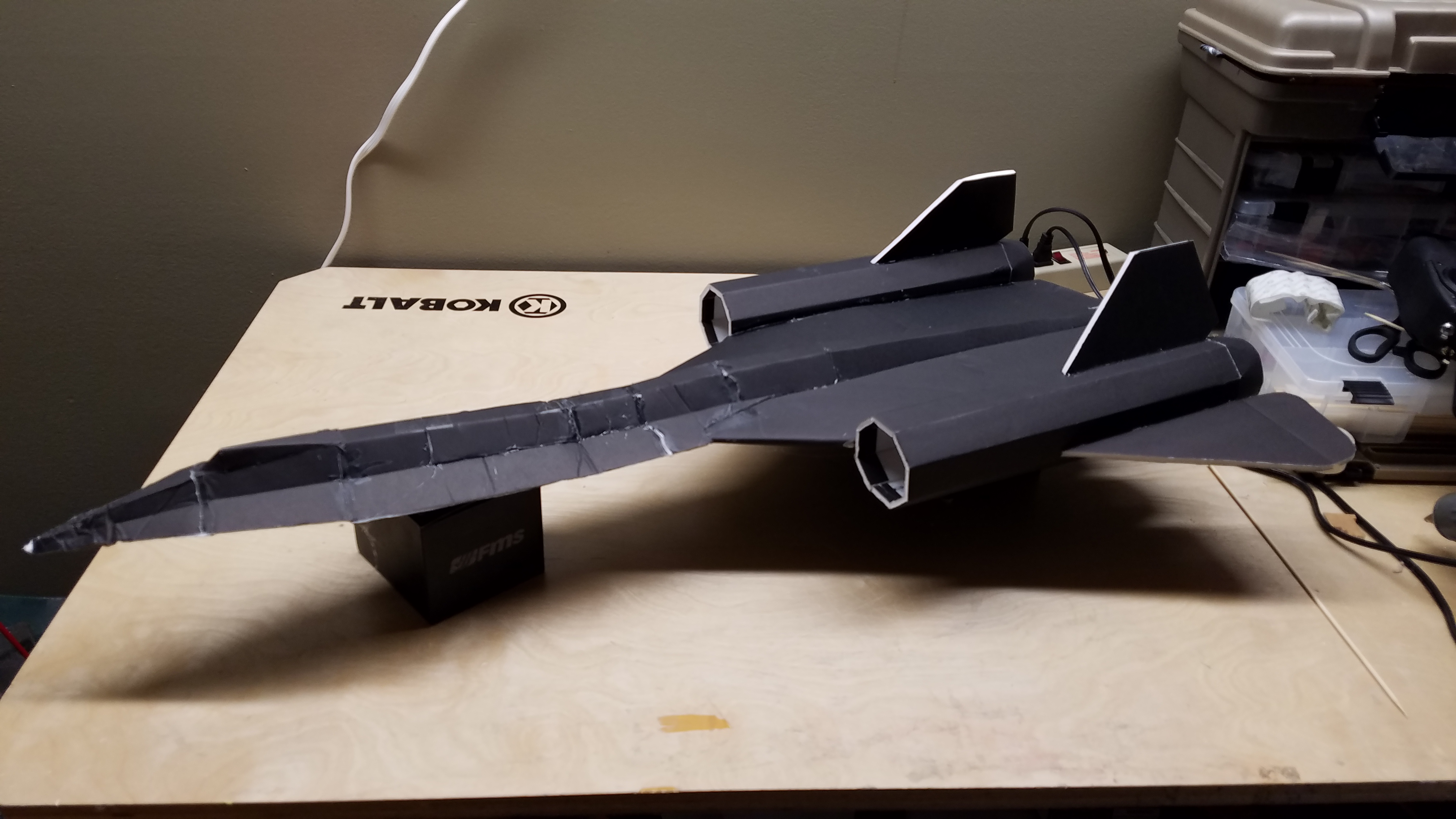 I have thought about adding a 3rd engine to the top of the plane disguising it as a D-21 drone that they tested launching from the SR-71, but shy of that I'm not sure it will fly with the current motor setup.

I had anticipated this result after the experience with version one, so proactively looked for alternate propulsion options, and these arrived Monday 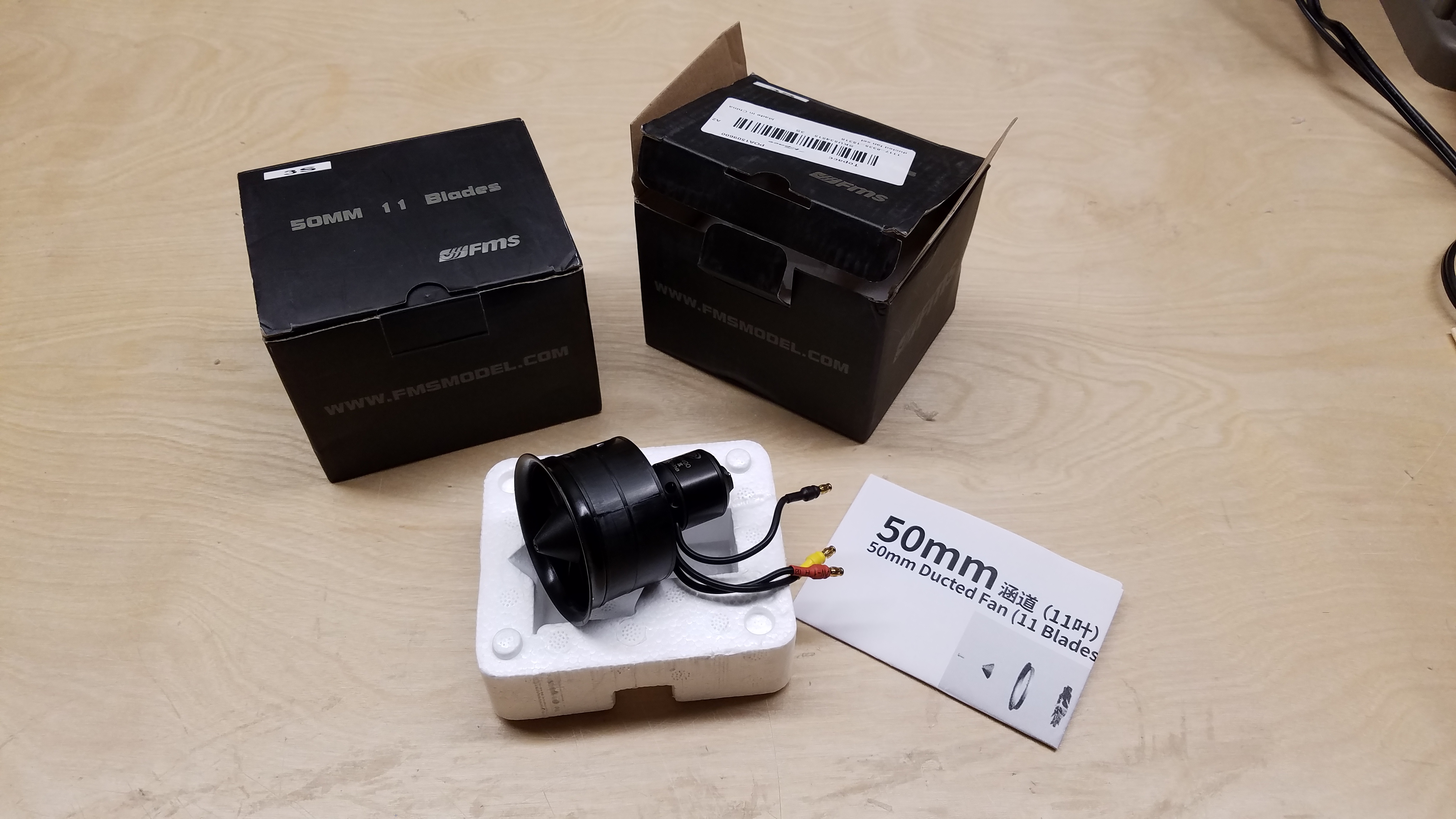 The plane will likely be 2-3 times heavier with these and the larger battery required, however it will have 7 times the thrust (650g per edf). With the edf's I am confident I can get it to fly. Even though I have the EDF's, the esc's aren't schedule to arrive until January 22, so it will be a few weeks until I will have version 3 ready to fly. In the mean time I will also add a 3rd nacelle to version 2 to see if that is enough to make something happen with it.

It will be a month or so before I will be able to get these built and out to test fly. Hopefully the next round of test flights will be worth posting a video of.

#59
Aww, that's too bad I hope you can get the third motor mounted easily. Out of curiosity what is the exit area for your nacelles? If you shrink it down to about 85% FSA (Fan Sweep Area) you might be able to get a bit more thrust for when you build it with the pod on top.

For the EDF's I think you could probably get away with building it at about 150% of your current size.

Whatever you do, GOOD LUCK!!!
M