#1
Going to document the build of this wing here which will include iNav. My previous iNav wing I have scrapped (based on a Phenix 60 wing) simply because it was too small and with all the extra stuff the wing loading was getting higher than I was comfortable with. I had bought a second of that wing and while I enjoy flying it even at it's lower weight the wing is flying faster then I really want.
I saw Matt's Freewing 1026 iNav install on his youtube channel "RagTheNutsOff" and I immediately thought - that's the wing for me.

#2
So far I've glued in the hold-down magnets and covered them with a little bit of white vinyl. As these magnets hold really tight I fashioned a handle from a plastic store card and glued that in place.

#3
Fitted one wing panel using the new 6mm, proper carbon fiber brace and plenty of UHU pot, sanding all foam surfaces a bit to rough them up so the glue had more surface to grip to.

Starting working on the electronics loom, fitted posts for receiver, motor, servos and current sensor. Need to fit one for VBAT too. The OLED panel and the GPS receiver were already soldered on so just kept these as they were.

#4
Other wing panel fitted and the glue left to set overnight. Servos fitted along with their extensions.

FC mount glued in place and the ply cut to fit. Cutouts made for the OLED display and the GPS antenna.

Servo wires routed and the ply glued down and lots of batteries used as weight.

#5
Getting there!
Motor fitted and tested ( no, I didn't have the prop on )

VTX embedded in the left wing and wiring loom for camera and FC made and fitted.

The GPS antenna covered by some white vinyl so both protect it and keep the airflow smoother.

What's left to do...
Receiver, picking that up from the post office this morning and mounting the camera.
Last edited: Mar 23, 2019

#6
Mounted the camera and then the flight controller decided to die
To replace, instead of buying another generic Omnibus based board I've plumped for the Matek FC-405 Wing FC. Little bit more expensive but its actually the best F4 flight controller for a plane.
Last edited: Mar 26, 2019
I

#7
Good choice, those Matek F405 Wings are beasts, mine spent nearly three months in a tree from September to November last year, when I eventually got it out, I dried it out in some rice for a few hours and it was back in the ARWing flying again the next day, I now have Mateks in everything they are that good, I'd rather pay the extra £10 for a genuine Matek than have some knockoff Omnibus go up in smoke or worse still fly away mid-flight.

Is that wing from Banggood? It looks a bit like a Strix Goblin.

Oh btw, you probably know but first chance you get change set failsafe throttle low delay to zero with the cli, imho it's a dangerous flaw to have an aircraft that if it detects no throttle input for 10 seconds it's default is to go into failsafe mode even when stationary on the ground and regardless of whether the receiver has gone into failsafe, I nearly lost fingers once because I landed and being an old timer used to just 4 channels, I forgot to disarm it (just used my throttle cut switch) and just as I walked up and pick it up, the wing burst into life and flew away out of my hands at 100% throttle, climbed to the default altitude, then landed again, scared the absolute crap out of me. For this same reason I think having air mode enabled all the time on a wing is wrong too, sometimes you just wonna glide, but I haven't updated to 2.1 yet so haven't experienced that.
Last edited: Mar 26, 2019 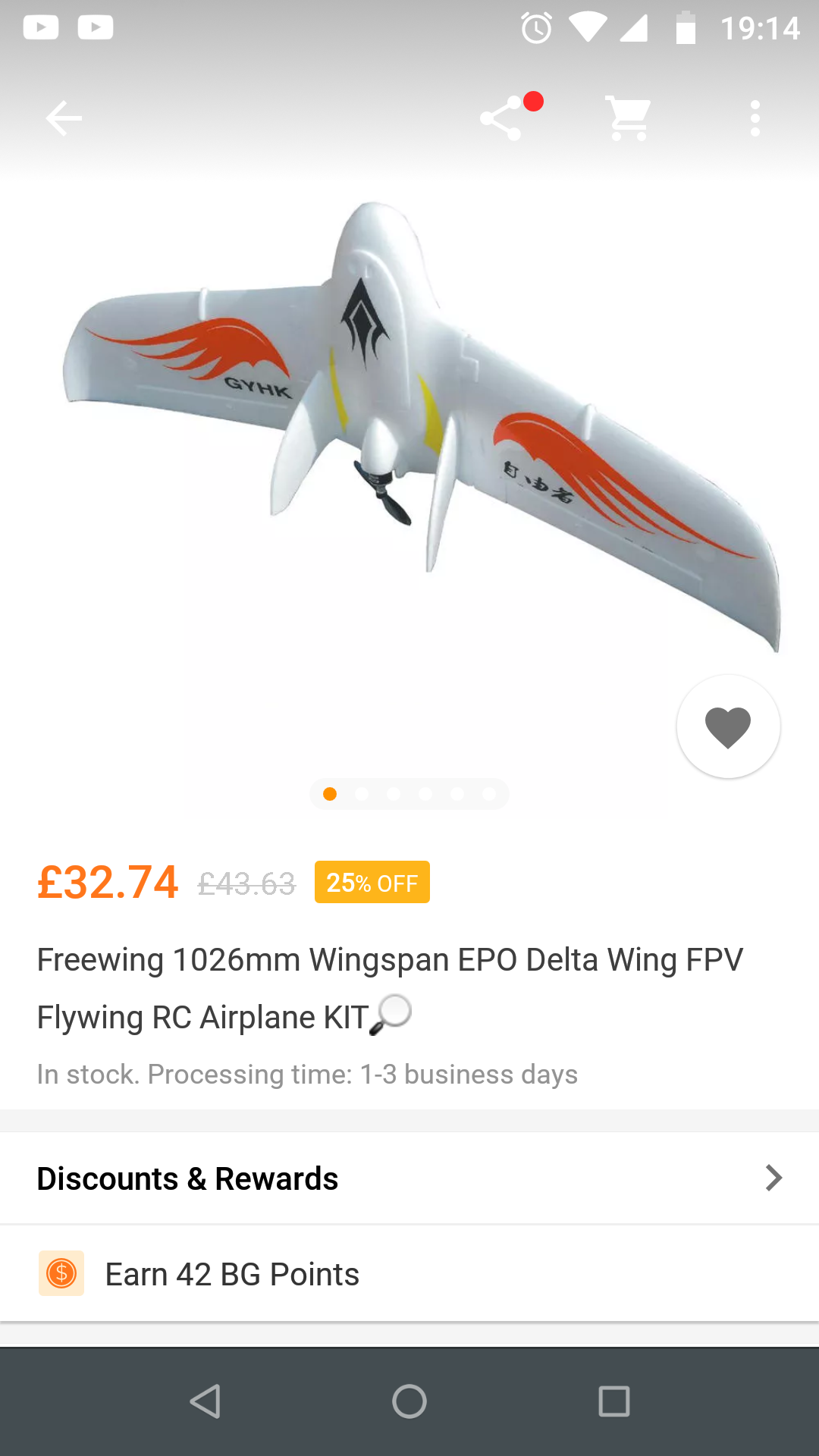