#21
Got a break in the weather, wasn’t expecting to be able to fly till Saturday, but here I am preparing to maiden the Sportster. I’ll give an update in a little while, wish me luck.

#23
Sportster has been maidened! Had a little more wind than I thought, this thing hates wind, not a good windy day flier. I’m also guessing that I had the C.G. back a few mm to far, it flew very touchy on the pitch, but the ailerons (with full, 100% throws) were very lethargic. Rudder was good though . I’m gonna have to wait for a calm day to decide if I want to keep this plane in my hangar.

#24
Update on the sportster: turns out it handles wind better than I originally thought. Just gave it another flight and it flies great! Inverted is really easy even in the rather gusty ~8-10 mph wind, also my first plane that is not fpv to do actual inverted flight (others attempts at inverted L.O.S. , I used the simple scout, were just rolls that were paused in the middle for about 5 seconds).

#26
Paracodespoder said:
also my first plane that is not fpv to do actual inverted flight
Click to expand...
Congrats!!
Inverted flight is my next challenge (after I feel comfortable with 4 channel flight.)

#28
kilroy07 said:
Congrats!!
Inverted flight is my next challenge (after I feel comfortable with 4 channel flight.)
Click to expand...
I have been flying for a little over two years now and I just now learned, but to be fair I didn’t really care to learn inverted until a few weeks ago. 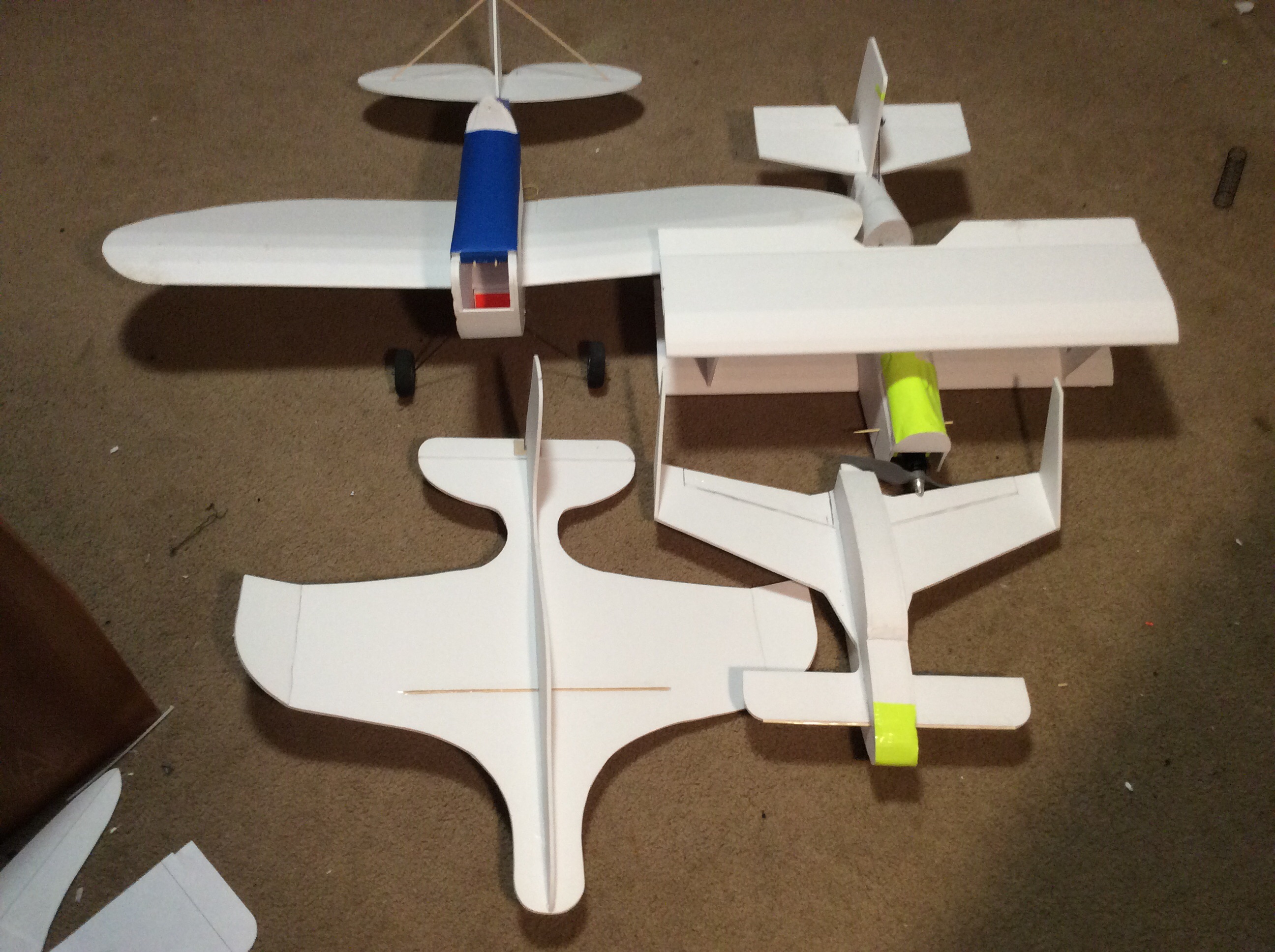 All builds have been completed, for better pictures of each plane see their own posts above. All that’s left is to maiden the blender, finish the ez with motor/esc/receiver + maiden it, and add all electronics to the glider trainer + maiden it. Looks like I will have enough time for a bonus build !

#30
Paracodespoder said:
I’ll just leave this here, View attachment 123897
All builds have been completed, for better pictures of each plane see their own posts above. All that’s left is to maiden the blender, finish the ez with motor/esc/receiver + maiden it, and add all electronics to the glider trainer + maiden it. Looks like I will have enough time for a bonus build !
Click to expand...
That was fast...

Good luck with your maidens!!

#32
All that’s left now is the glider! Baby blender was maidened earlier, and it flies way better than I was expecting! Mini-ez also got its maiden, had no trouble launching even with the torque of the monstrous 2205 that is mounted on it! Long straight lines and high speed passes were great even in the 8mph winds, (until the un-supported pushrods flexed a little to much and I ran out of up elevator on the final approach, a little mud on the nose but no real damage though!). All that’s left for me to do is find a couple servos and finish up the trainer glider, that’s tonight’s goal.

#33
Woohoo! I have all my official entries built and flown. Trainer glider flies on 2s, but with barely enough power to keep it in the air, especially with a 10 mph headwind. Maiden ended when the wind flipped it inverted and right into the ground, no damage other than some wires that pulled out of the bec, already soldered those back on though. Remainder soon with a 3s, this battery is only 2grams heavier than the 2s and it should give me enough power to keep it in the air. If I build another, I will either scale it down to a 20 inch wingspan, use a larger motor (not as likely as I don’t have any other motors around this size) or I will try to build it lighter. Next build? 18 inch nano goblin clone using the same motor, fpv .

#34
Paracodespoder said:
THIS BUILD HAS BEEN COMPLETED AND SUCCESSFULLY MAIDENED.

Plans printed, tiles and cut out, ready to be transferred to foam. View attachment 123161
(12 inch ruler for scale)
Moving along nicely, just need some poster board and electronics and it will be ready to go . View attachment 123323
Waiting for a good day to fly!
View attachment 123449 [/QUOTE
Very nice looking build. May your flitesbe long and your landings always perfect!
Click to expand...

#36
Updating the trainer glider post now with a couple pictures, flew way better on 3s, had plenty of power this time.

#37
Trainer glider is awesome! Flew again today, fun for low and slow and it can even flat-spin! A little smaller and some ailerons and I would have a nice 3D flyer.