#41
Piotrsko said:
My $0.02: to land you need some sort of stand off otherwise the air compresses and your controls stop working. Ok on take off because you need the compression to unstick and you aren't there long enough to tip over besides CoT is above CG. not ok on landing unless it's vertical and not tilting.
Rule of thumb: thrust = 2X weight minimum for any decent acceleration up. The nitro power people have props to 24" diameter.
Really interesting build/design.
Click to expand...
My thoughts too... but I learned something in my chats with other guys building SingleCopters, the latest firmware does not activate the servos until the motors are armed and above idle. For take off I need to gun the motors to lift off the ground in order for the thrust vectoring to engage. I am thinking that the ground effects will hamper any flight near the ground. It finally dawned on me that that is probably why Otto always has assistance in landing. I'll be getting near the ground it just tips over.

The following is the only clip I found where assisted landing wasn't used...
But it almost made it.

#42
Yup in the video, he gets low and just dumps thrust, kinda a low alt crash. Unlike a heli, I think ground effect doesn't bother you. What happens if you do a 3" spacing landing gear or land on a raised expanded mesh grating?

The idle thing sounds annoying, when / how do you check your controls?
Obviously I don't fly drones or helicopters.

Went back through the thread, @PsyBorg is probably correct about CG except that I think everything has to be slightly below CoP which should be somewhere midpoint. Ooh, ooh, subconcious rocket stability lessons just resurfaced.
Last edited: Nov 22, 2019

#45
Piotrsko said:
The idle thing sounds annoying, when / how do you check your controls?
Obviously I don't fly drones or helicopters.
Click to expand...
Yeah, that function really inhibits checking control surface function. Turns out that this function was added to the SingleCopter firmware recently. Others building this type of rig noticed the change, so I'm going to load some older firmware and see if it works better. From the discussion it sounded as if the arming of the control surfaces while it was still on the ground would perpetuate a situation that more and more control was autonomously fed to the control surface because nothing was moving as it was on the ground. By waiting until it gets off the ground prevents that. If I were programming it, I probably would have made the controls all manual with no stabilization until the flight controller detected an upward movement, kind of like autonomous launch mode.

The balance point is about 1 cm above (towards the top) of the mid point on this testing prototype, so I'm going to build a bigger one and do more testing.

rockyboy said:
Spring loaded wire strut landing gear released via servo
Easy peasy!
Click to expand...
How about four D size rocket motors, one in each corner. Whoosh.
I thought of extending wood dowels down at each corner about 10 cm. They wouldn't be too noticeable in flight, just have to land in taller grass. I'm going to see how the bigger one flies before trying to tackle the little issues. I have to overcome some more basic flight characteristics, like getting sustained flight, before I address landing. Wait, taking off is the easy part. Good thing it is foam. Tipping over isn't too damaging.

Retractable dowels, just rotate 90 to be inside, which is much bigger by the way.

#46
This week in the time I had, I turned toward how to make the TARDIS shell.
1) I would like to be able to disassemble it for transportation.
This means that I want four panels that can be separated and transported flat. Now I have to come up with quick and stable way to join the panels. Here is my 3rd attempt... made with 3D printed parts and screws. The corner molding piece is hot glued as a corne the two panels are not. 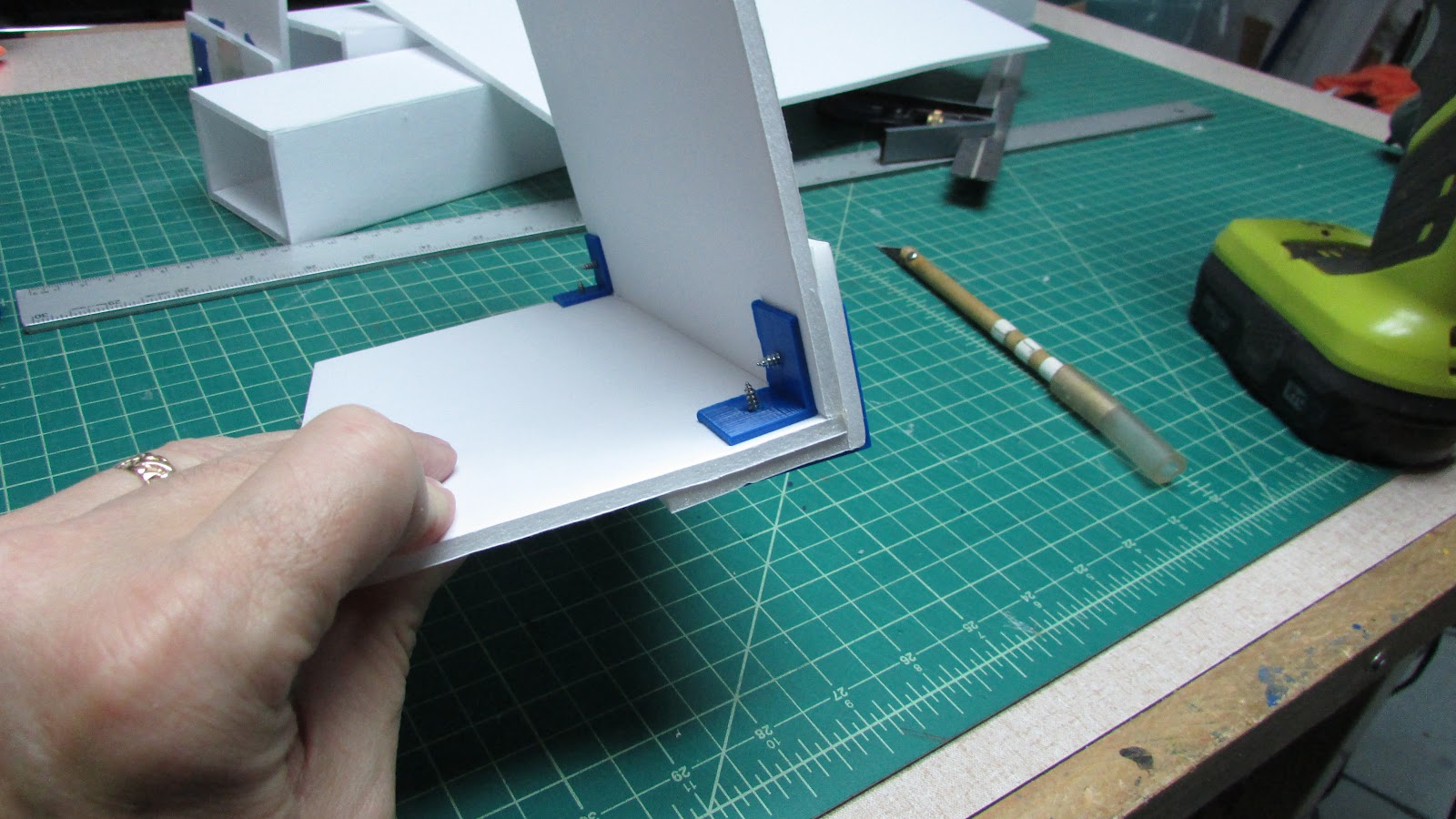 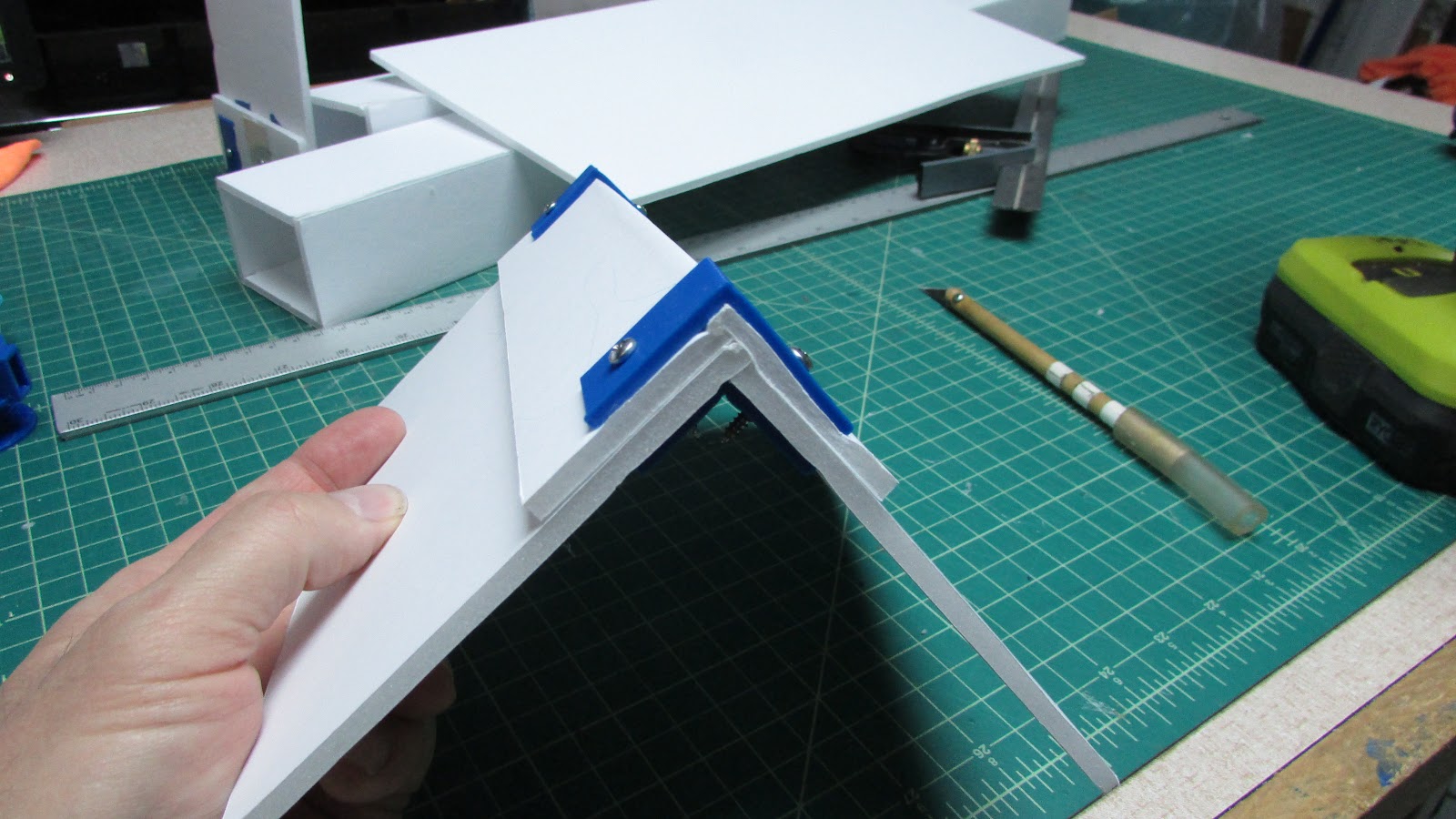 I don't like the brackets on the outside, so I've decided to place them between the large panels and the corner molding. I will carve out a bit of foam and mount them on the inside of the corner molding piece. I also decided that I want the side panels to be tabbed along the joining corner like a finger joint, only with long tabs. 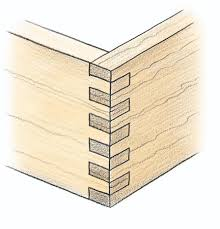 I hope this will help reduce the sliding and relieve the stress on the corner that I think will be prevalent.

#47
Yesterday I didn't get as far as I planned... I got sucked into watching a documentary on the Spitfire and WWII. 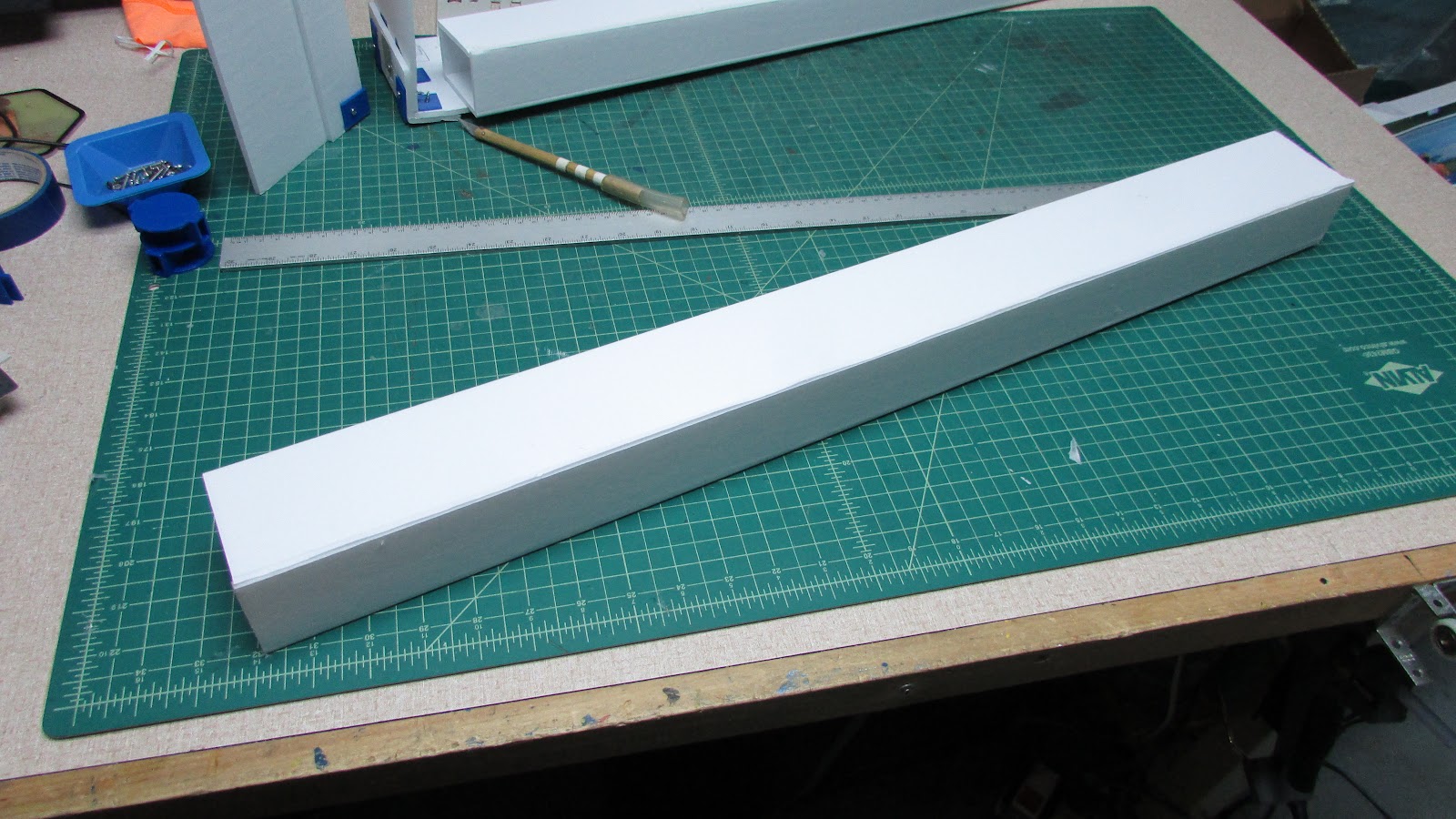 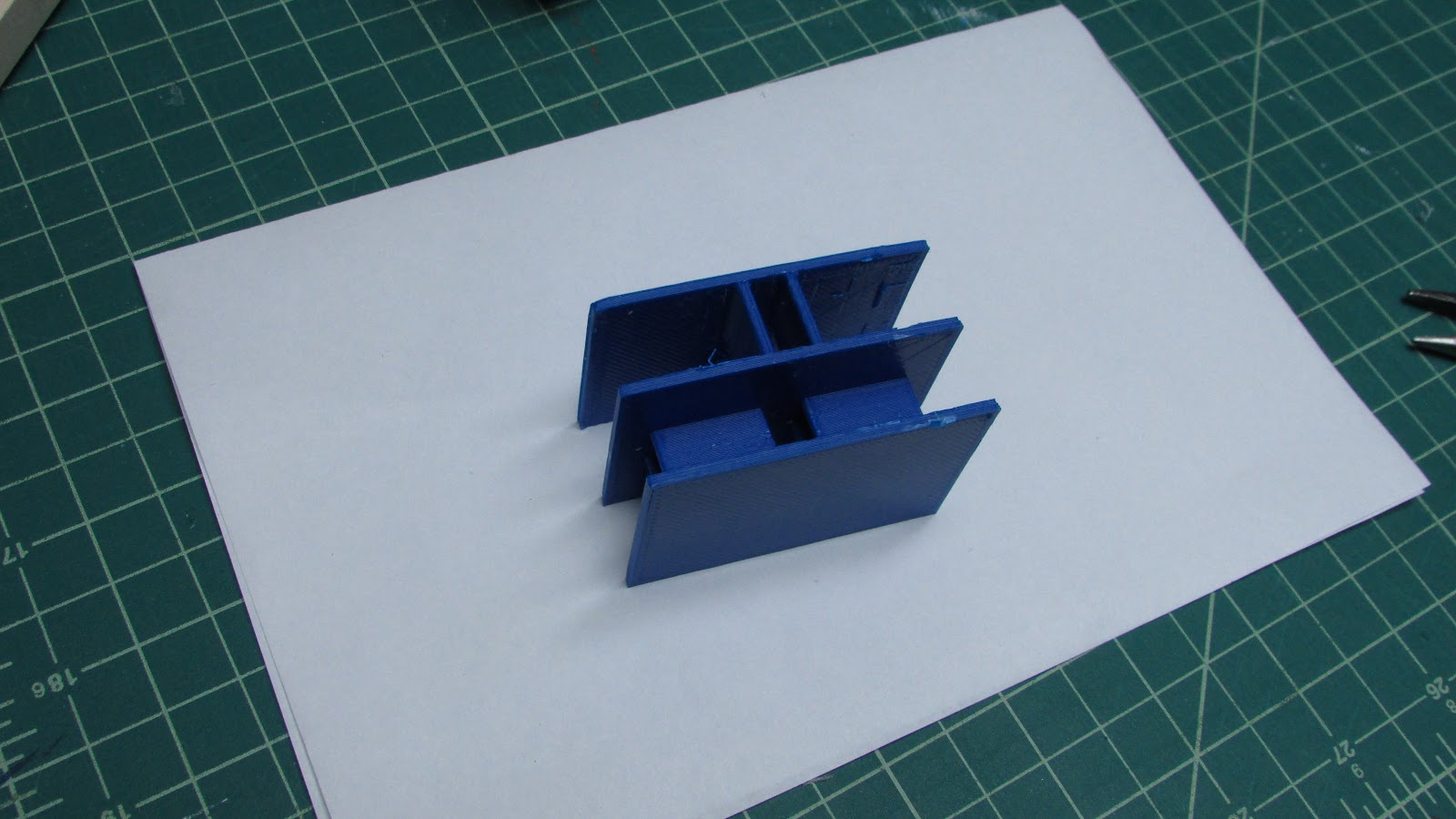 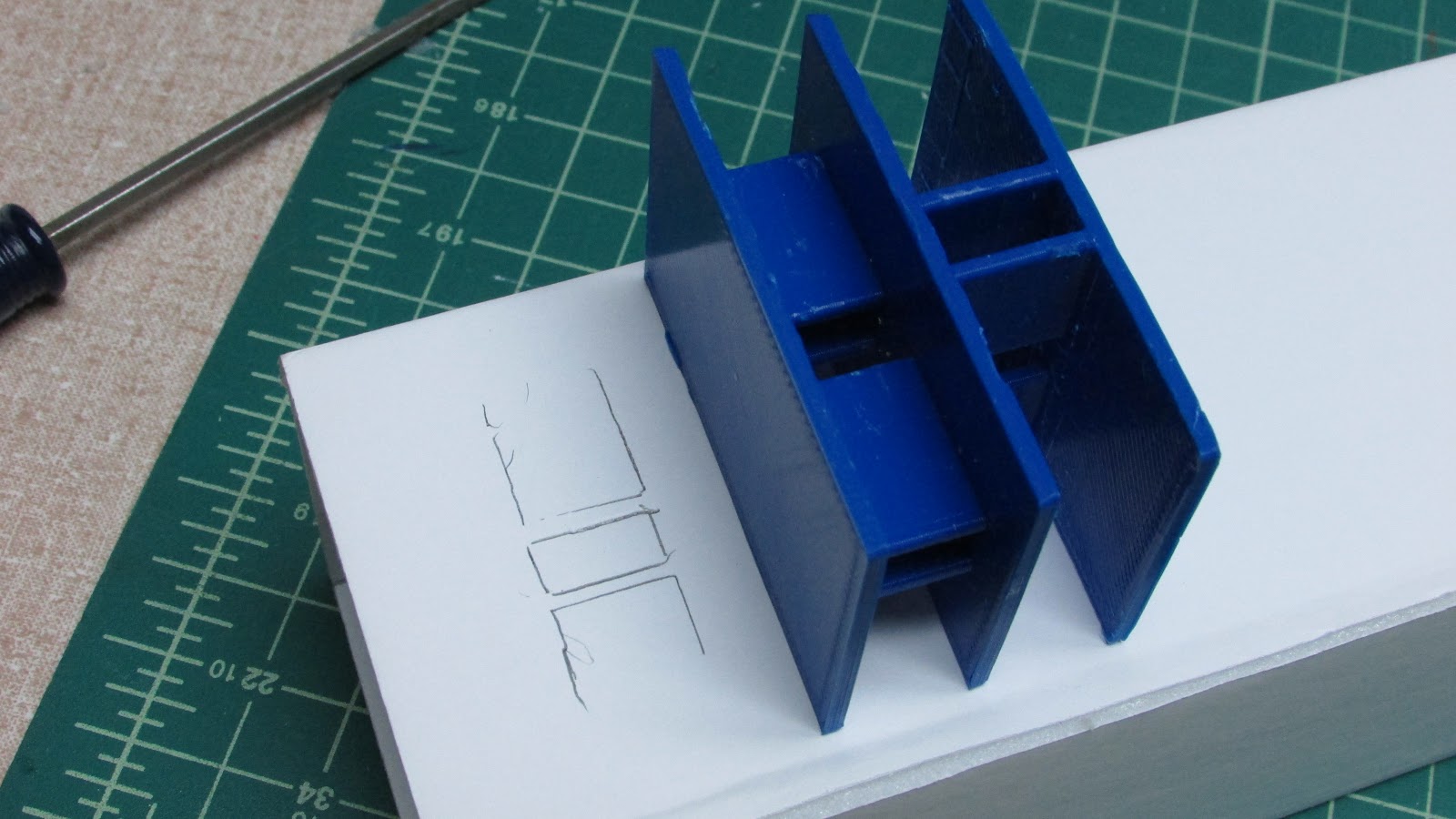 Draw where to put holes in the tube 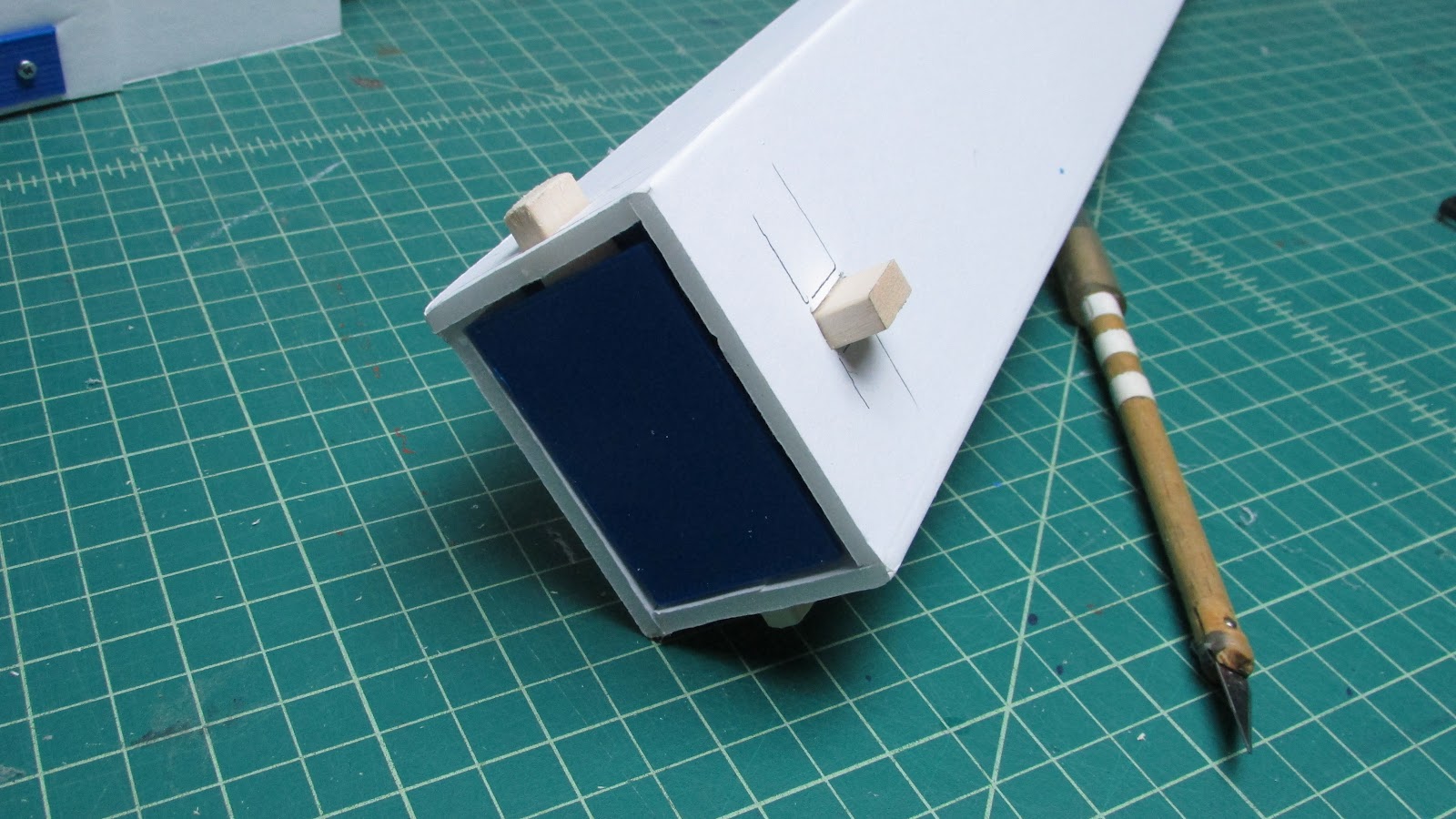 Here is what it will look like if I choose to use this idea. This is the motor mount at the top. I’ve used short dowels just to try it out.

After creating this I thought there isn't really a reason to make it this large. I was going to house the entire Matek F405 Wing FC inside the shaft, but I could mount the FC vertically and make this center shaft much smaller. It was good practice.

I think the smaller tube will be 4.5 cm square or smaller like 4.5 cm x 2 cm. All I'm looking for is a location to mount the flight controller and battery and have a concealed wire race.

#48
Current CG above midpoint is technically towards stable. More above more stable according to NASA GODDARD
"D" rocket motors are a bit big, maybe 1/4 A. Ignition in parallel is tedious and erratic. I do like the retract idea. Oh you were joking.....
Why are the sensors on the FC commanding servo movement when the device isn't moving? That's really odd unless they drift horrendously.
Last edited: Nov 25, 2019

#49
Piotrsko said:
Current CG above midpoint is technically towards stable. More above more stable according to NASA GODDARD
Click to expand...
That's good info. I'm not a rocket guy, so I was just going to balance it in the middle. In my mind I would think that it would be most stable with the balance point way below the middle, kind of hanging on the prop.

Piotrsko said:
Why are the sensors on the FC commanding servo movement when the device isn't moving? That's really odd unless they drift horrendously.
Click to expand...
I don't know. Personnally I have not experienced it. One of the other guys building a SingleCopter mentioned it as a potential reason. I could find it logical if you set it up on unlevel ground, in horizon mode the FC would keep trying to make the craft go to level by inputting more and more control surface movement. Since it is on the ground, it will never "level" so when you punch out, the FC is immediately pitching the SingleCopter.

About the retracting dowels.... I was only half joking. I'm not considering it as a first option because I think weight is going to be very constrained. I may need to break down and get a huge motor that will drive a 20" prop... at least 15". As configured it will have a 10" prop pushing about 4 lb static. I hope that is enough.
You must log in or register to reply here.
Share: Facebook Twitter Google+ Reddit Pinterest Tumblr WhatsApp Email Link
Menu
Log in
Register