#1
Although I will concede that some of this idea has been fermenting for about 3 years, I'm still blaming Ben Harber for this entirely. I started running calculations for his Angry Bee just to see how far I could push the concept and then I got this idiotic idea to back down to one motor and see how much I could shrink it and still stay over 100 mph. Nothing good happens when you do that. Oooh boy... 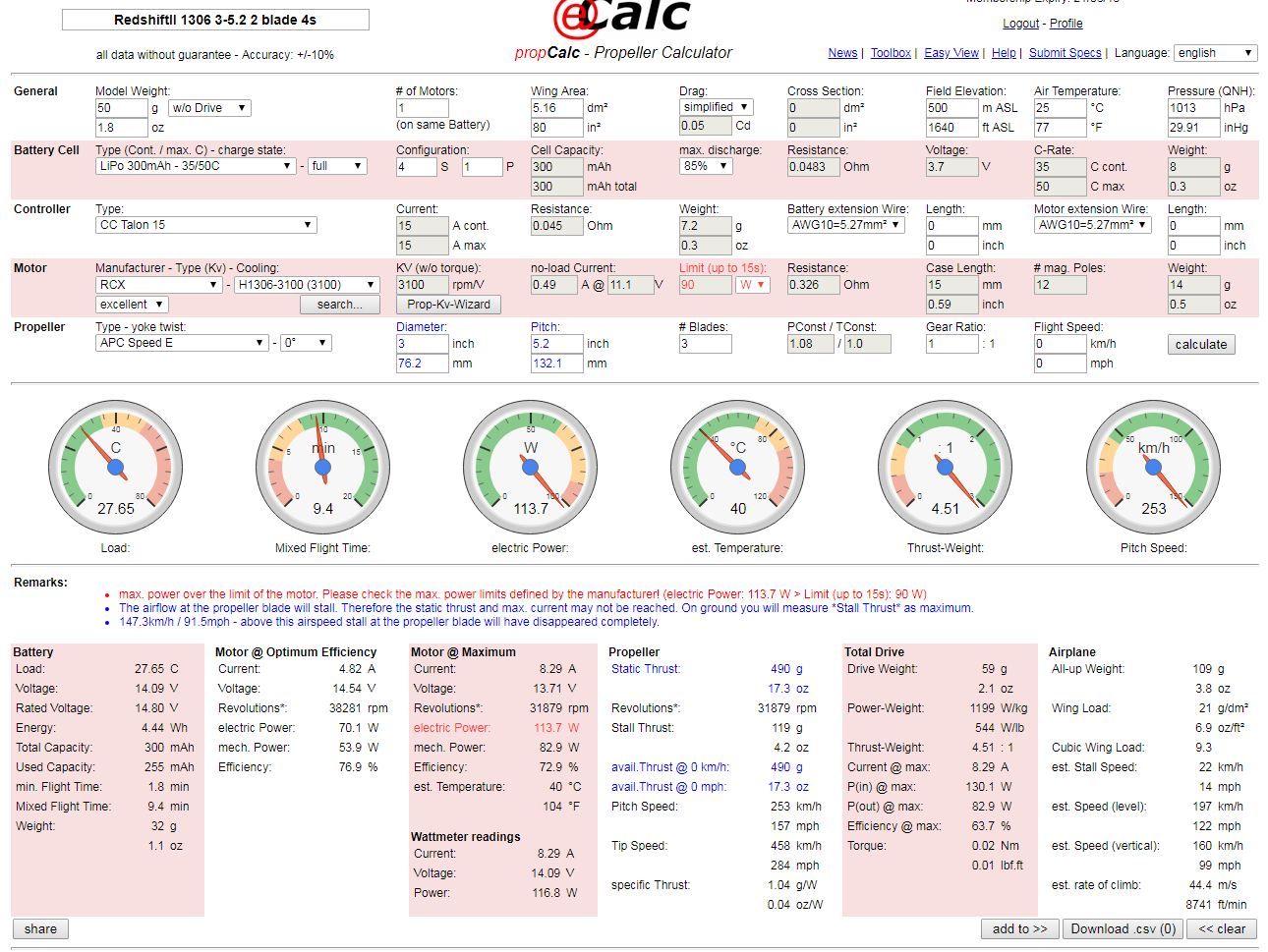 Then I had to figure out a plane to build it around. And I decided to shoehorn it into this old project: 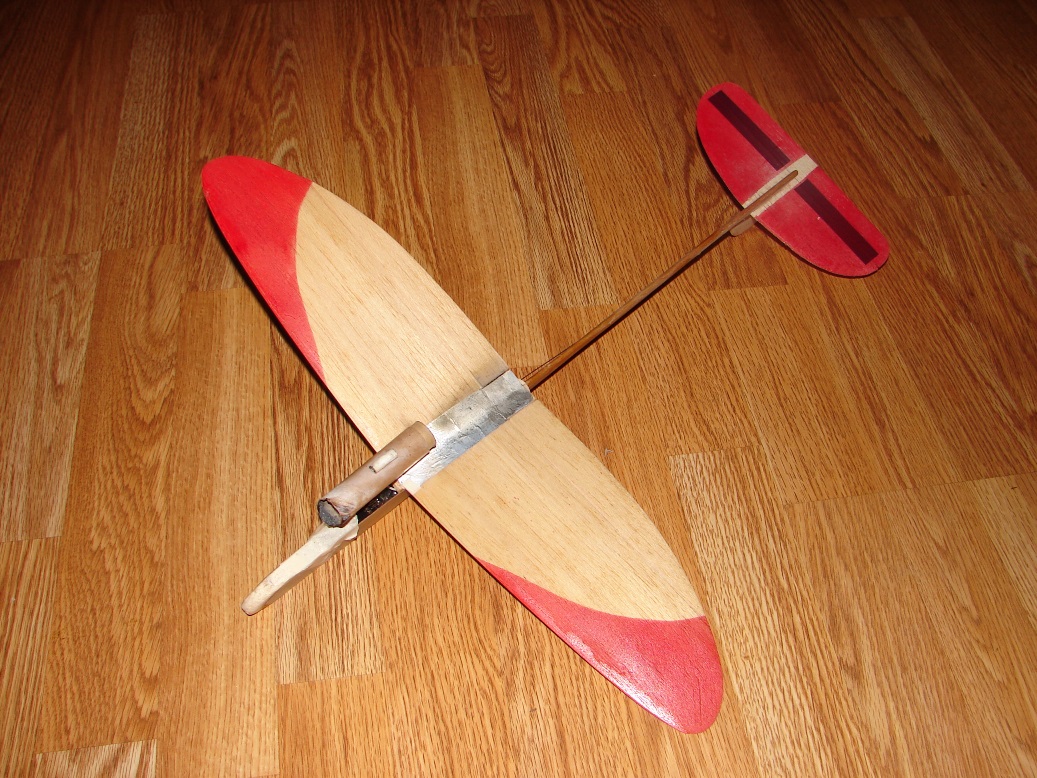 That project morphed into this one before I decided making composite wings wasn't as fun as I originally thought it was: 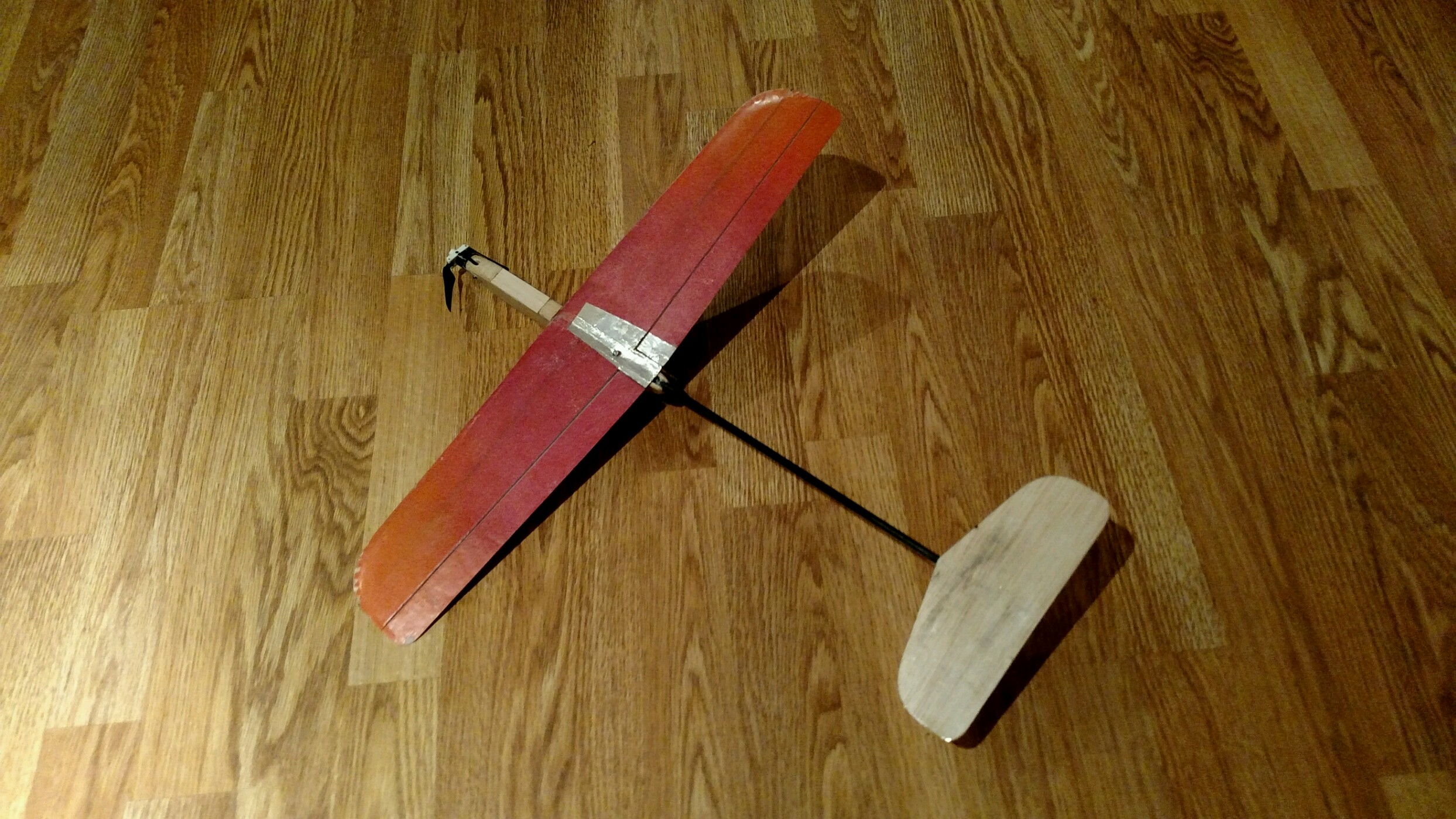 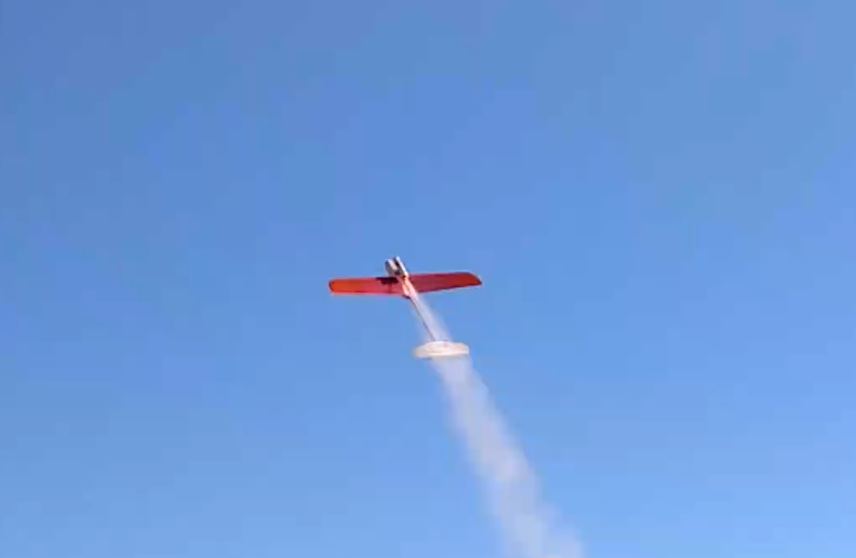 So I drafted up something and proceeded to keep tweaking it for about three weeks: 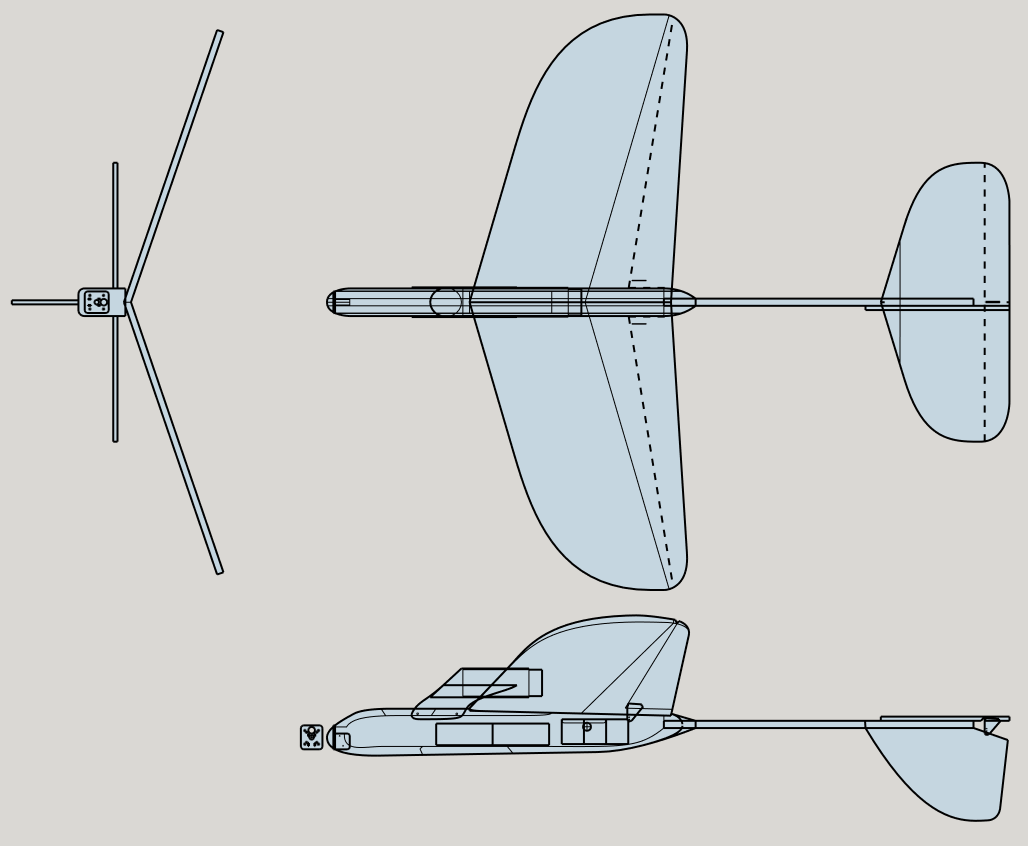 So what we have is a 100 mph, sub-20" span model with a quick change front end that allows you to dump that prop and go to a rocket powered setup. Question is...will it work?
Last edited: Jul 23, 2018

#2
I lasered out a set of parts and did a full build video (not done editing it) of this model. There are a few minor tweaks needed, but it went surprisingly smoothly. 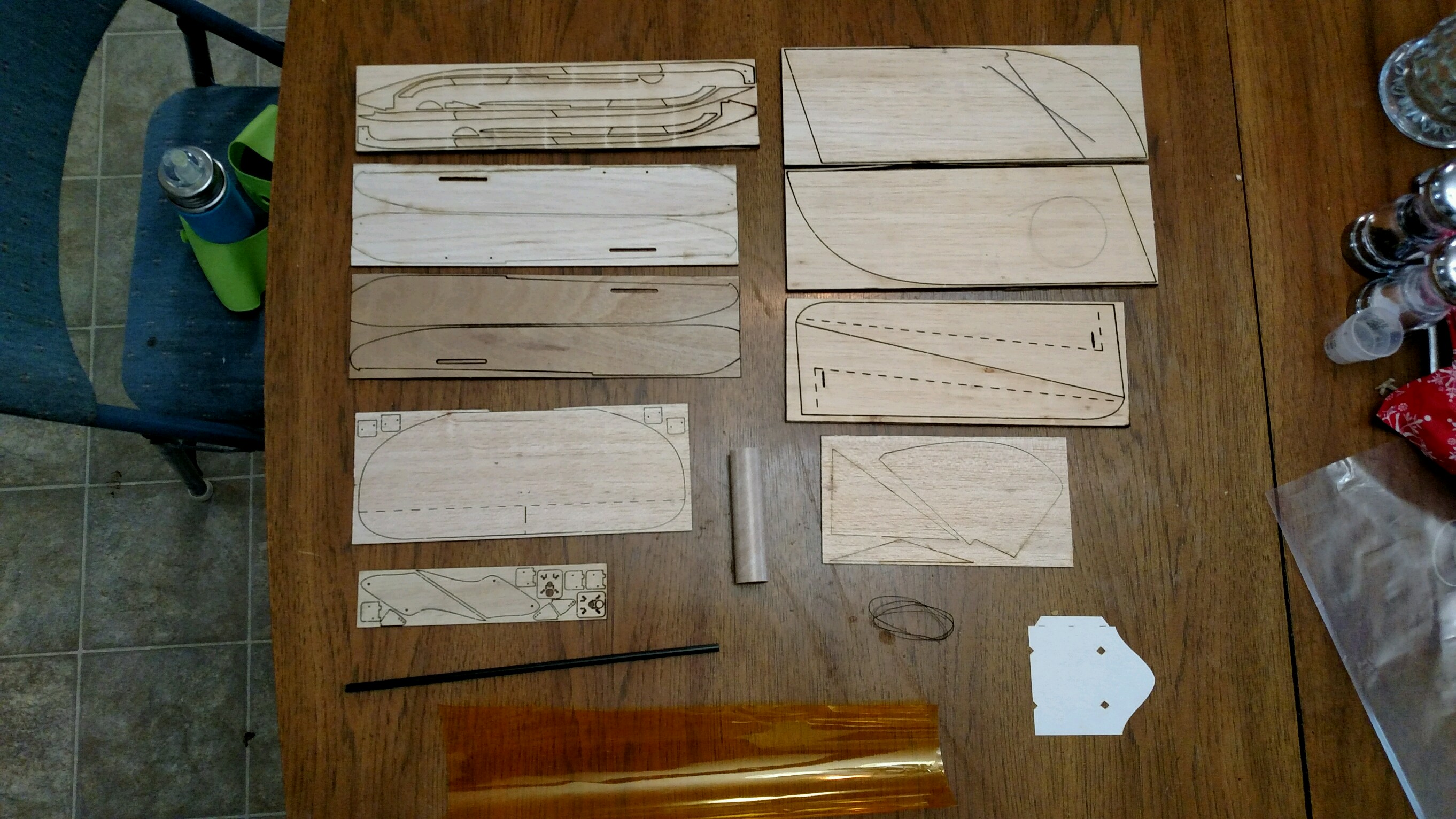 Starting in on the fuselage buildup: 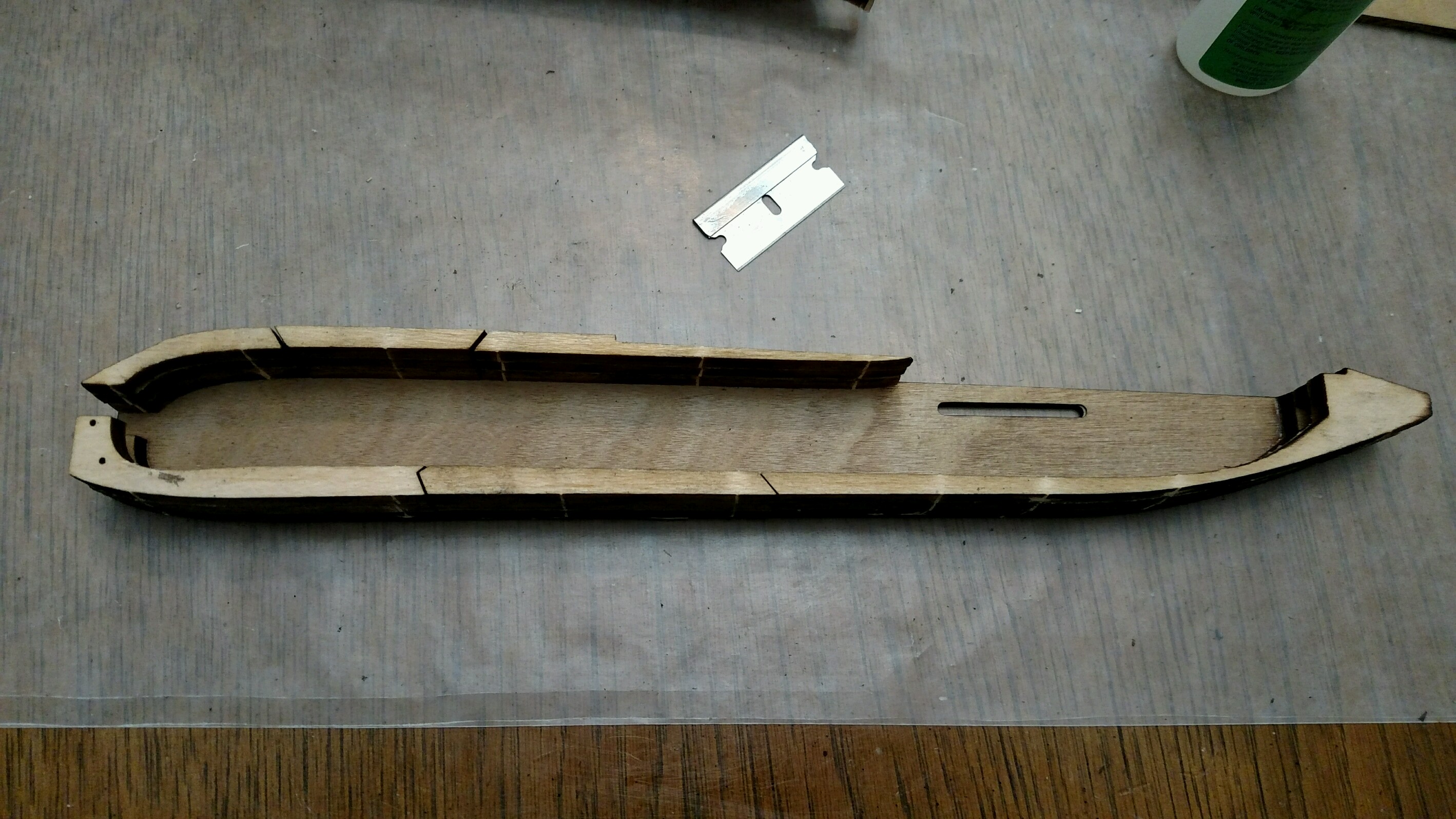 All stuck together and built out: 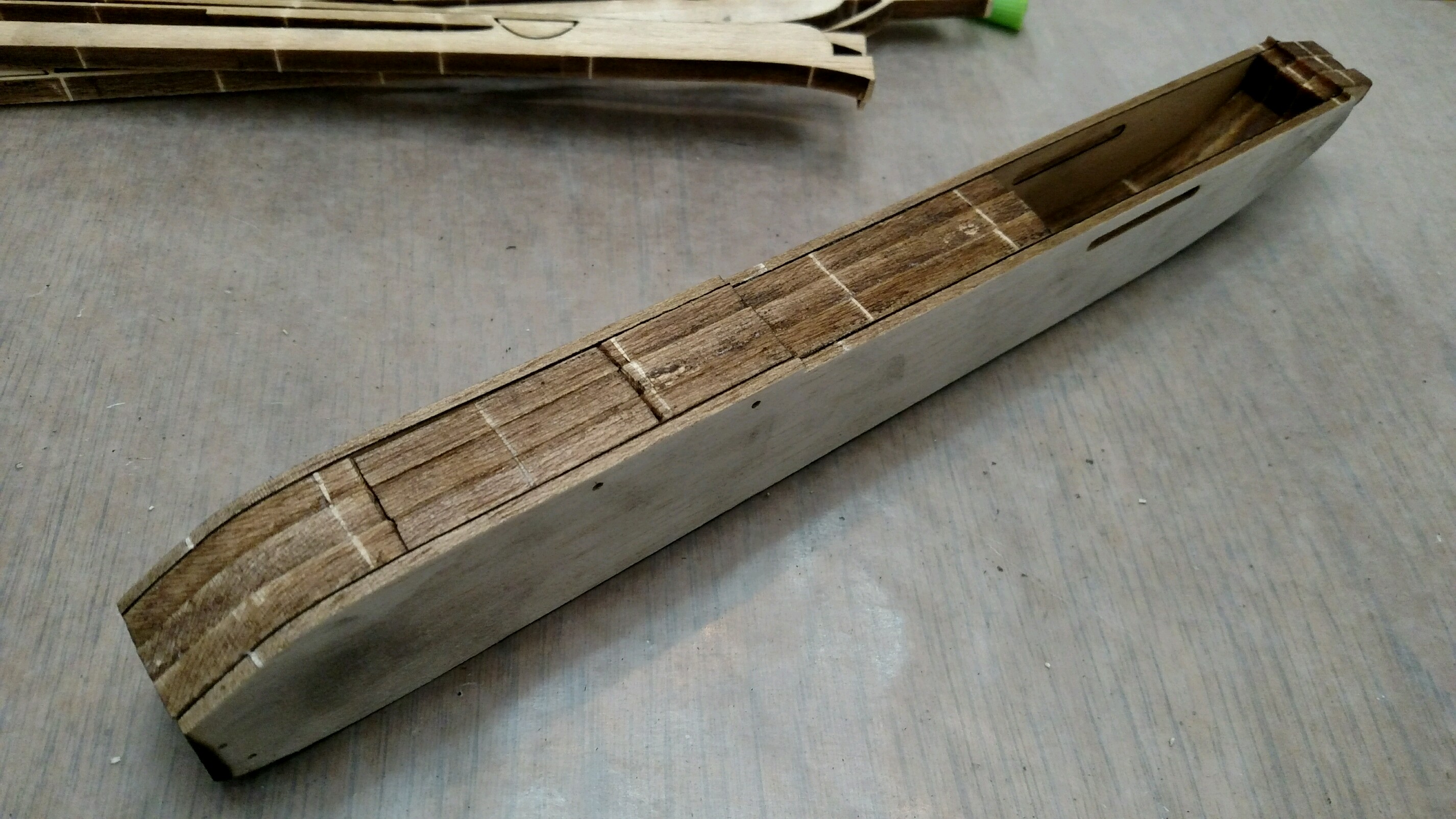 Yeah, that last one was definitely not pretty. I never cease to be amazed at what a difference sandpaper can make: 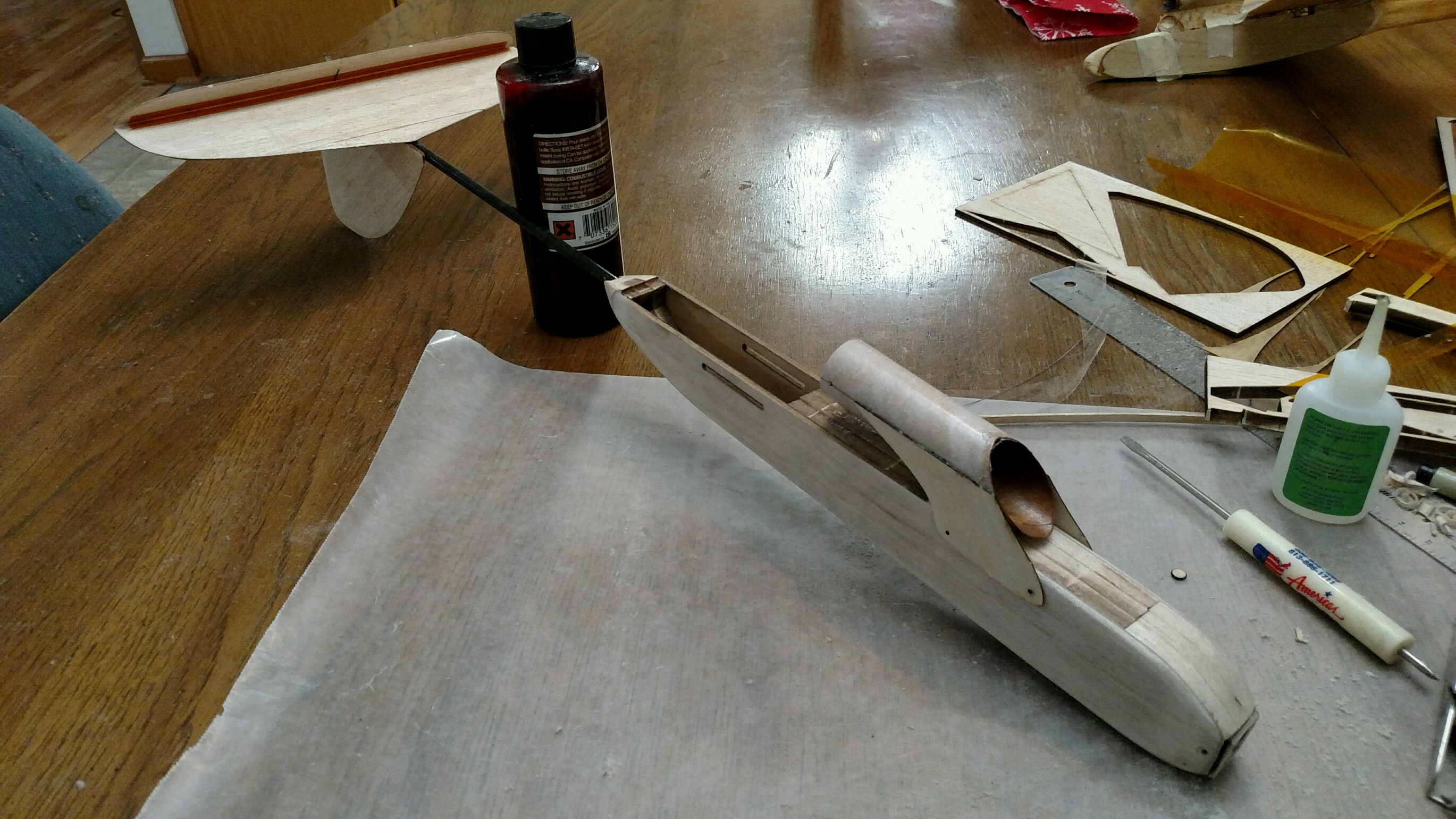 So in a single evening, I went from a set of parts to this (a giant mess on the dining room table): 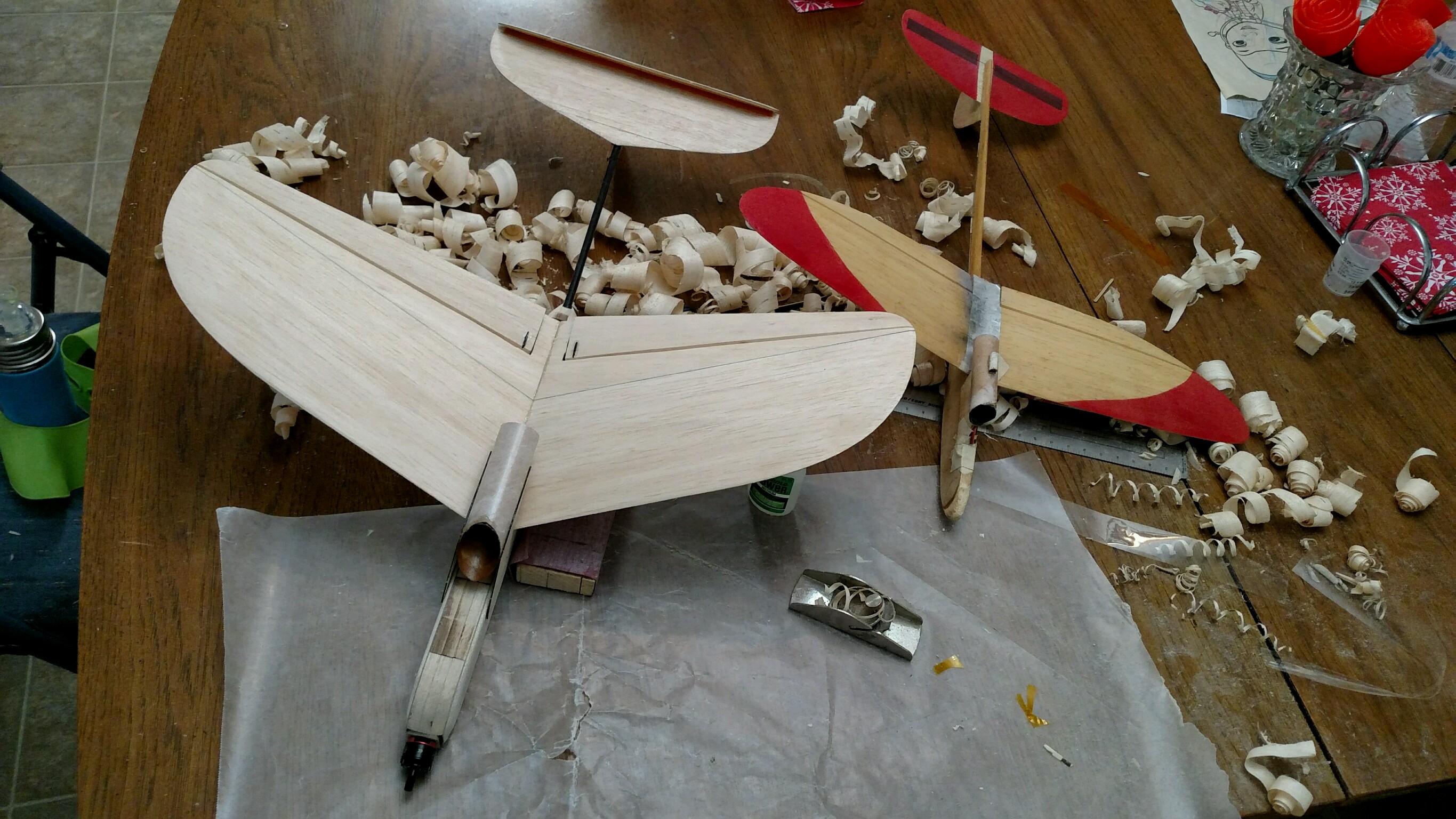 No electronics installed yet...

#3
Before installing electronics, I gave it a flashy paint job. The appearance didn't change much between painting and installing the guts, so I didn't take any more photos until it was finished. 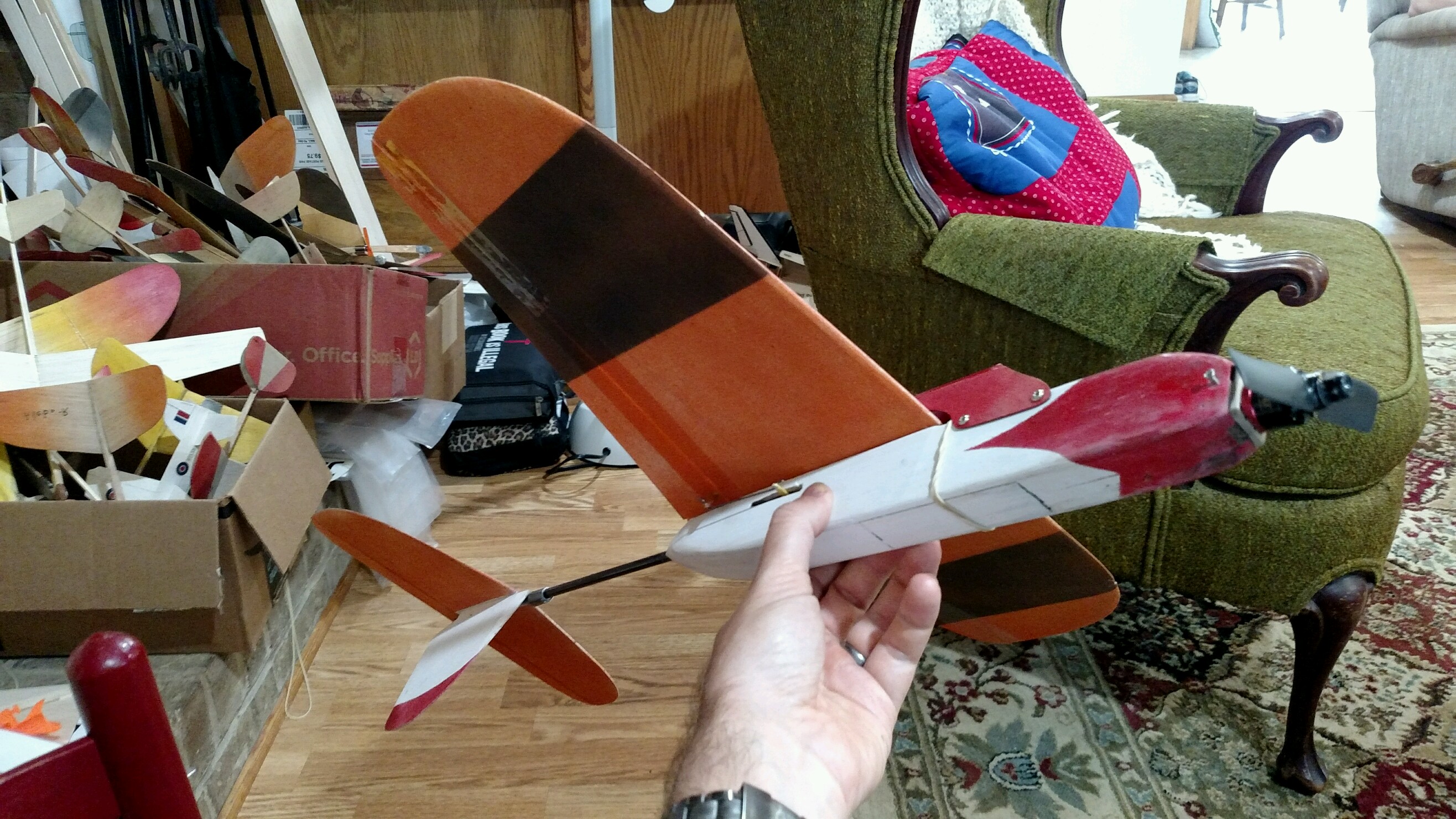 Clearly it has some pylon racing roots because the second landing left me with a broken prop. And yes, it was a smooth, slow landing. Welcome to fast airplanes I guess. 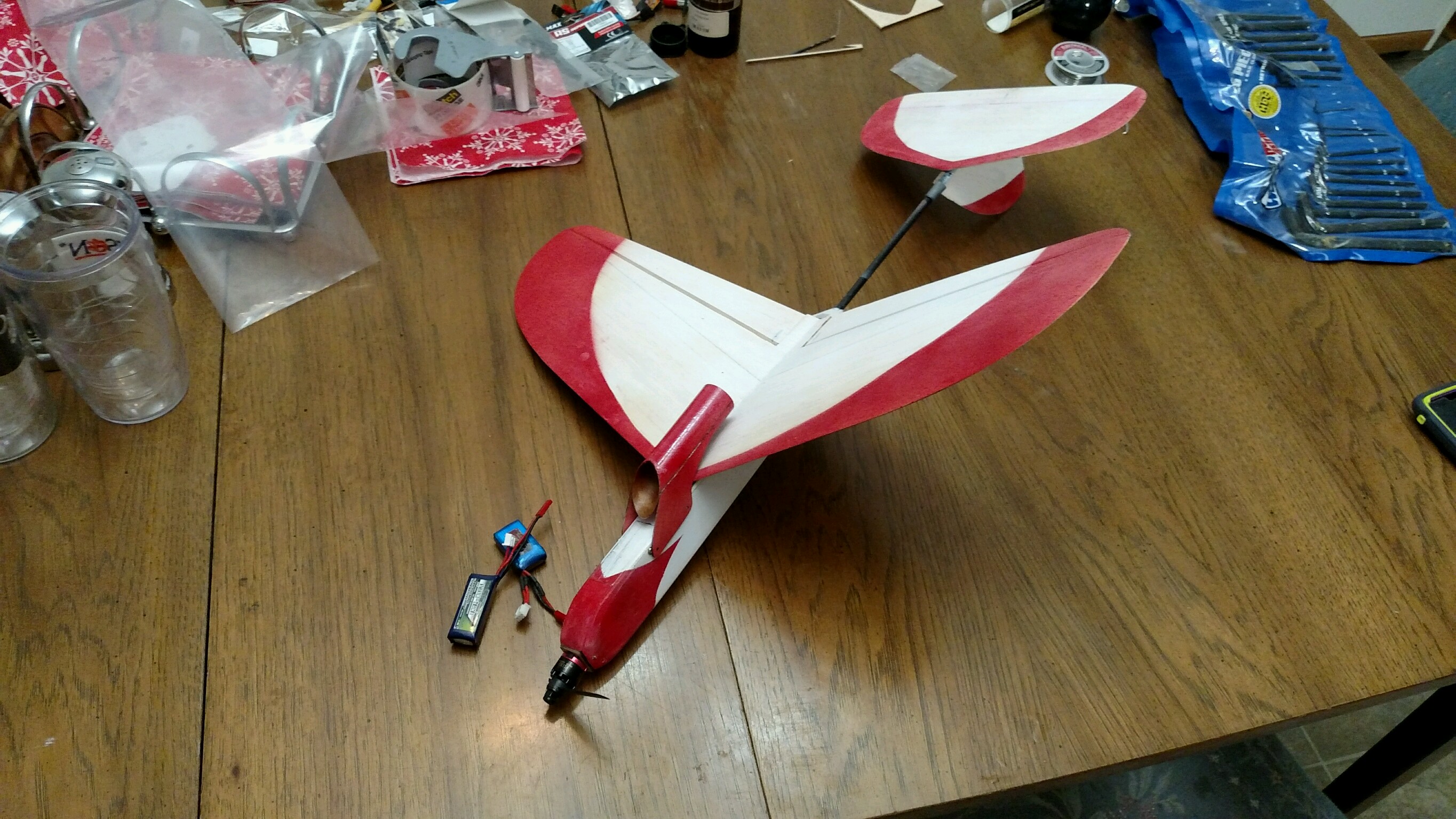 #4
The maiden flight was on a little 2s 200, and then I went to a 2s 300 after that. The motor is an EMAX 1306-4000, so a little hotter than the design motor. The cheap Turnigy 3g servos actually seem to work just fine. I was low on small servos and had to resort to a 9g JR288 servo (those are like $30) for the elevator. Overkill much? Anyway, started on a 2 blade 4x4.5 prop which was rather noisy but safe and flew the model just fine. As mentioned above, I blew that prop on the second landing. Have a look at the maiden here (battery wasn't fully charged so I had to land very prematurely):

I dropped to a 3.5x5 bullnose the next day and found that the climb rate was the same, top speed was higher, and I got longer flights. So weird. I don't have any video, but it has been tested on a 3s 200, and "ballistic" doesn't even begin to capture the performance. I'm still nervous about rocket power, but as an electric hotliner, this thing rocks. I have ZERO complaints. Stay tuned here...I'll be putting more up soon.

Oh, I tried a folding prop, a 5x3. It was a disaster and after about 3 premature "arrivals" and only a few seconds of actually stabilized flight, I decided that prop just doesn't cut it. I don't know what to do about that. There are no oversquare folding props available in this size range. 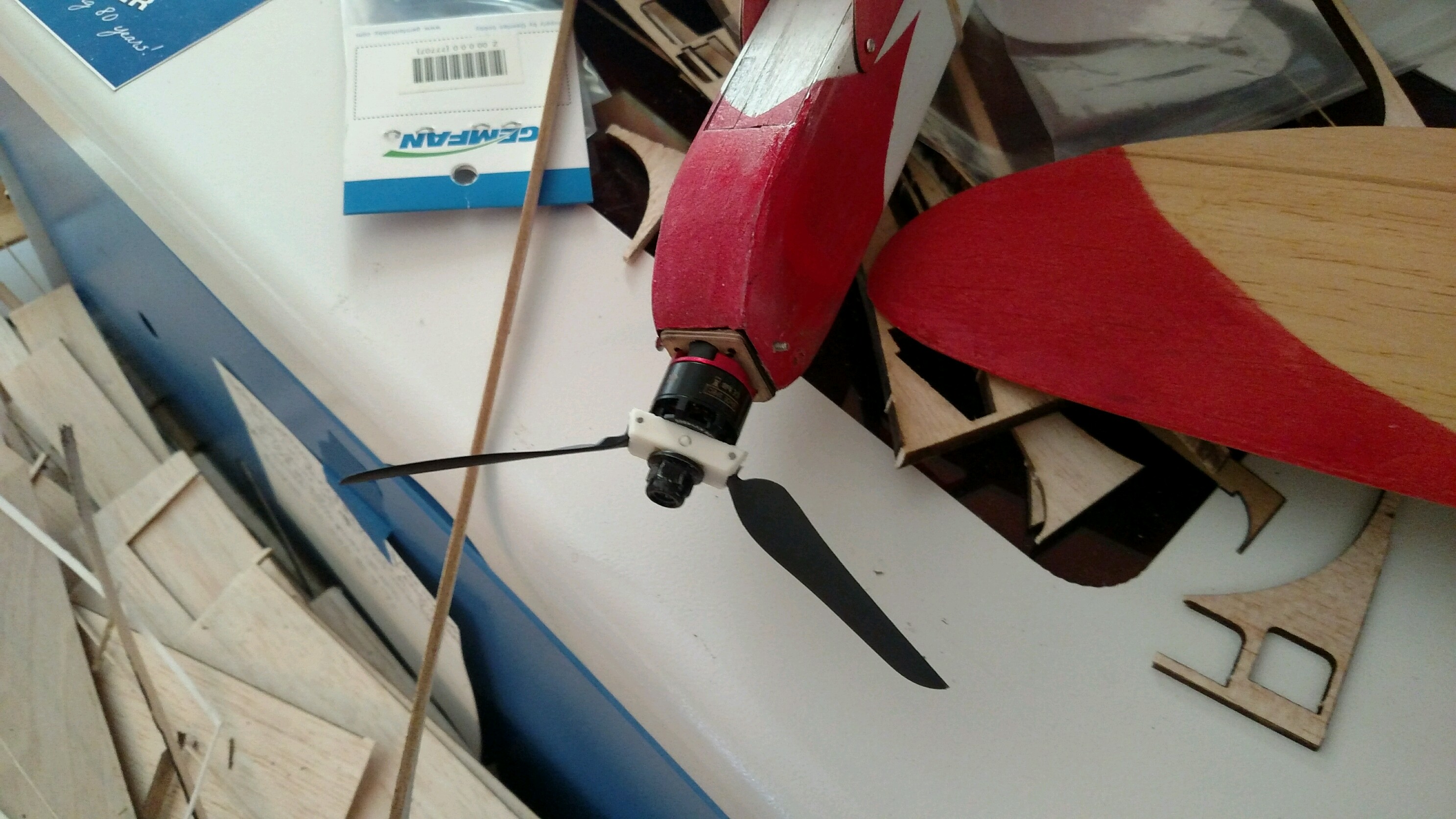 After weighing the model and finding it's 4.4 oz without rocket or battery whereas my Windlance D is 3.2 oz, I decided to go straight to an Estes D12-3. The Windlance D is a little slow off the pad on Cs and I didn't want any risk of a sluggish takeoff leading into a stall. Well, let's just say that worry was unfounded. Launch on the D12 was absolutely insane, faster acceleration than I've ever experienced with an R/C rocket, even than the original Red Shift on piston launches. 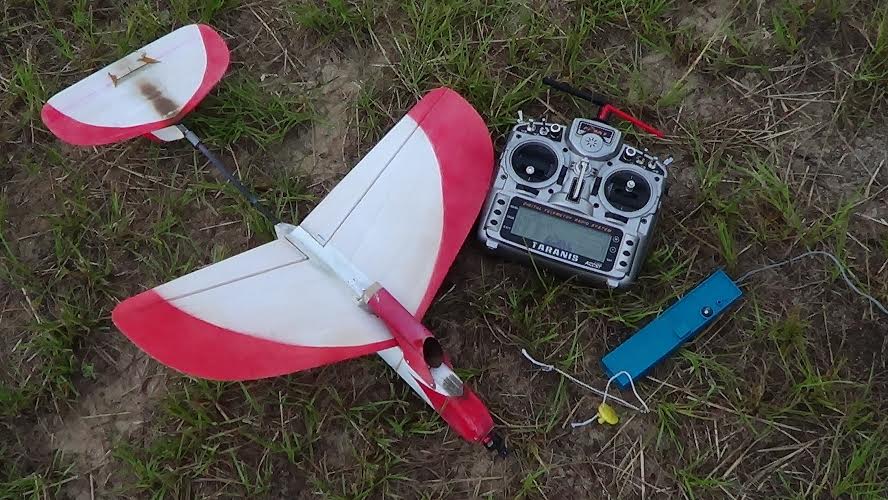 Flight pattern was fine other than the model gradually pitching up during the boost and then pitching much harder after the burn ended (downthrust limits the pitch-up behavior). Not really an issue, just not exactly expected.

I did put foil on the wing and stab to limit scorching. A good idea, problem was I forgot to seal the edges of the stab shielding with CA and that patch of foil peeled off before the model even cleared the launch rod. Oh well... No damage other than the center of the elevator hinge getting melted away. I'll seal things back up as time permits. As it is, she flew fine and is still flyable even with that minor degradation. There were no controllability issues or any hint of flutter, so I consider the model to be safe and proven. It doesn't have some extreme level of glide performance, but it's fun and nimble.

I'll get the build video edited and online this weekend along with all the flight footage and a product page on our website.

#7
jaredstrees said:
Well that looks fun!
Click to expand...
Oh yes it is! I'm loving it!

So I finished the build video. Went for a two part because it's pretty long...

#8
Oh wait I forgot something: here's a video of my review on specializedbalsa.com

Short answer, just send them your money. They have the good stuff.

#9
And the flight demo videos are up now. Here it is screaming around on a 3s lipo: