#1
We should all have by now heard of the Mini Tiny Trainer and I have built a few, (too many to remember). There is/was a challenge thread on the forum titled "getting-stupid-with-the-tiny-trainer-the-challenge". After a bit of deliberation I decided to join the challenge just to add a few crazy mods to the tiny trainer and to produce a far more serious beast to throw around the skies.

Sure I could have just printed out the plans at an enlarged scale and used that but it lacks a real challenge. In addition the standard mini powerpod is too small to accommodate a much larger motors and the standard powerpod would not fit in the Tiny Trainer. What I needed was a MIDI powerpod. One that could take a larger motor and yet still fit into a Tiny Trainer nose, (with a few mods to the nose that is).

Additionally I needed a different wing for more lift and the provision of functional flaps. The wing should have no shortage of lift so that sustained low speed flight should be easy as will be hovering in a breeze and even short field landings EVERY time! A different and somewhat matching tail was also desirable. So that build commenced! 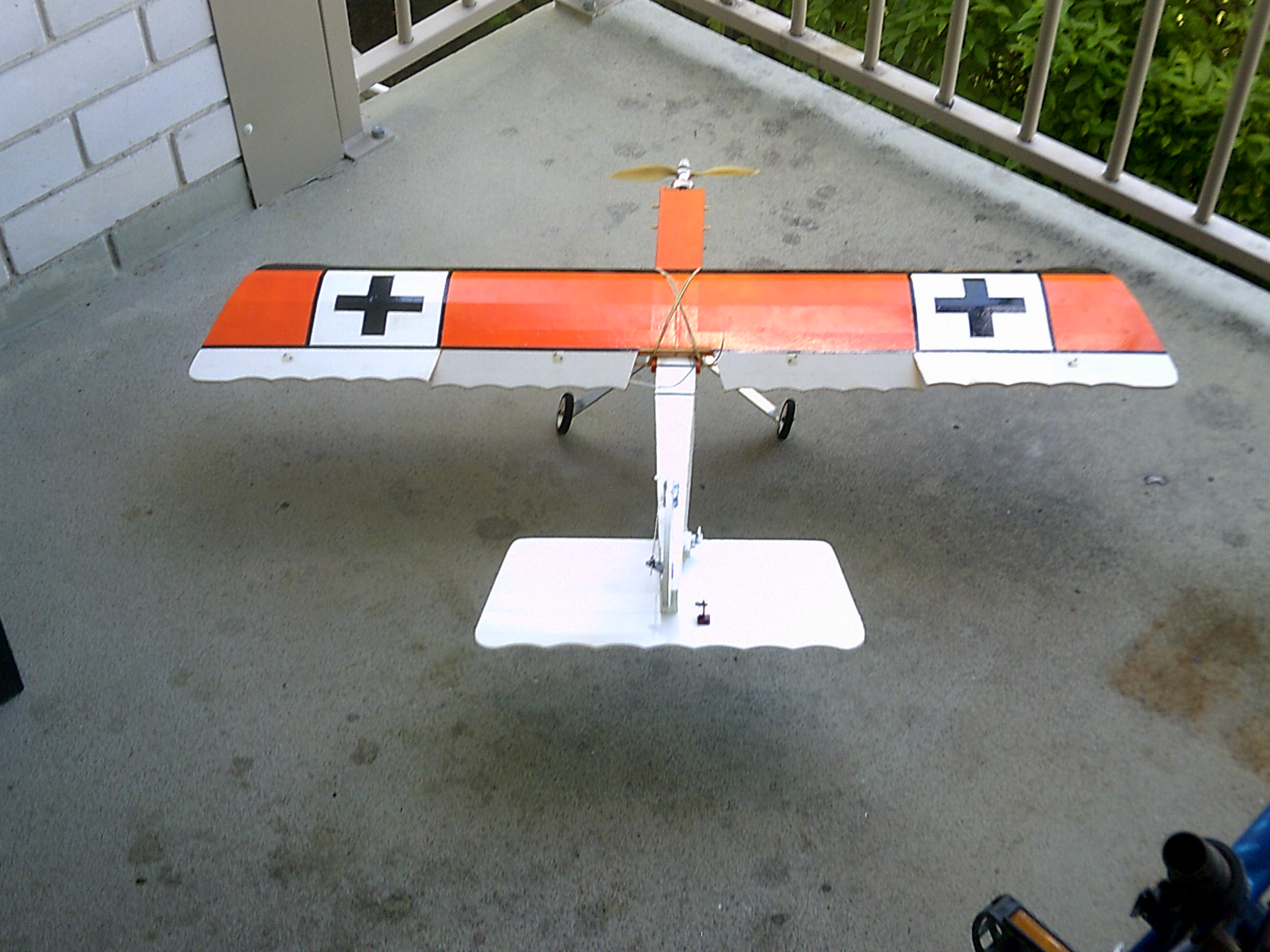 Tips or Recommendations:
Start with the CG at the forward point recommended. (better slightly nose heavy).
Use coarse rudder for direction control on take off run, decreasing the rudder deflection as the speed increases. (Helps keep it straight or steer as required).
Maximum recommended flap deflection should be around 45 degrees. (Only tested to around 20 degrees due to control horn selection).
If possible have the flaps operated by a 3 channel switch as the 20 degree setting is good for short field takeoffs.
The nose wheel is lightly loaded and coarse use of elevator and throttle can see the nose wheel rise up off of the ground during the take off run. Not a serious problem but something to be aware of!
The wing by itself can be retrofitted to a standard TT though it will fly somewhat slower and land slower. Ensure that the Wing CG point is used if the wing is used on an older standard TT fuselage!
Ensure that the ESC you use has a 3A BEC minimum!
On final approach keep the plane level, (slightly nose down with flaps extended), and GENTLY start the flair as the plane gets close to the ground, (around 12 inches/30cm above the ground) Done properly it will settle on the main wheels and then the nose wheel will settle as the speed drops. DO NOT INCREASE ELEVATOR when the main wheels touch the ground UNLESS you apply the throttle and take off again! Too much elevator can cause the plane to suddenly rise up and stall with the resultant damage from a crash!

Nose wheel fitted to powerpod, (Only a preliminary and simple design - non-steerable)

Wing sealed and painted in required colour scheme (Apparent different colours due to lighting effect. Both wings are the same colour!).

Well it flies and rather well. Not quite as fast as I expected but it still had quite a turn of speed and plenty of acceleration. The flap setting was only to 20 degrees or so. (the flap setting was limited mechanically due to the poor choice of control horn - secondhand). The flaps definitely work but the slow speed flight could be further enhanced with a greater flap deflection, (say 40+ degrees).

I obtained over 2 GB of flight video on my GoPro but then as usual I will just post a few screenshots from the video. 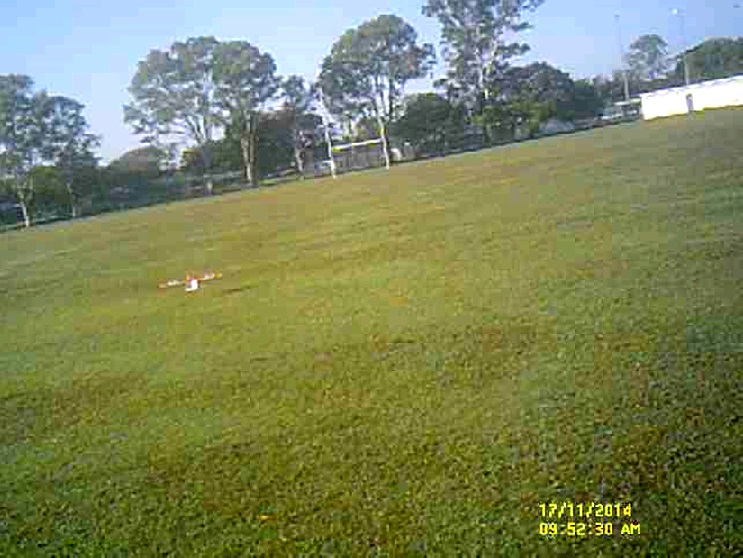 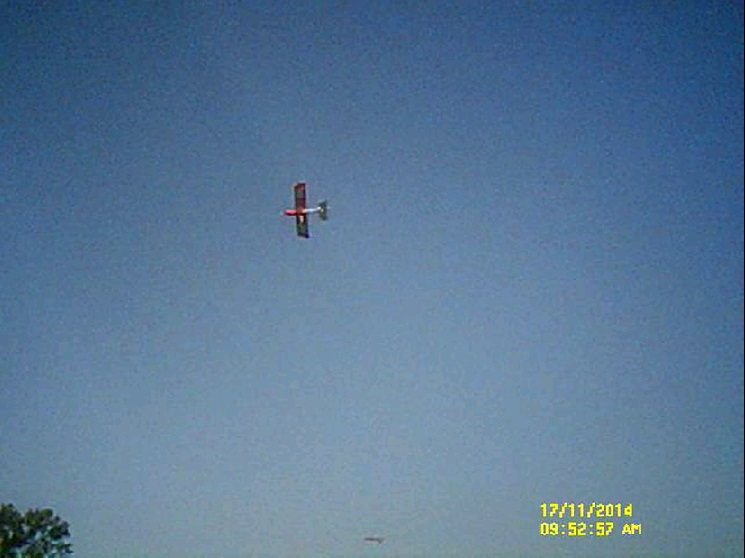 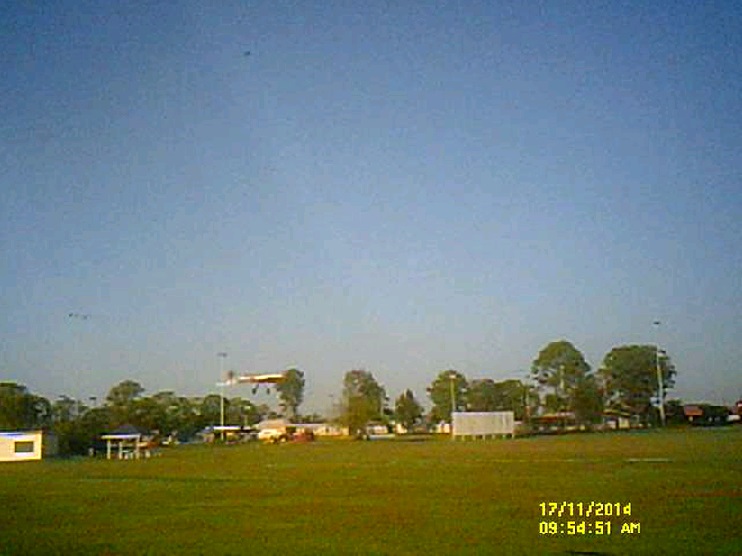 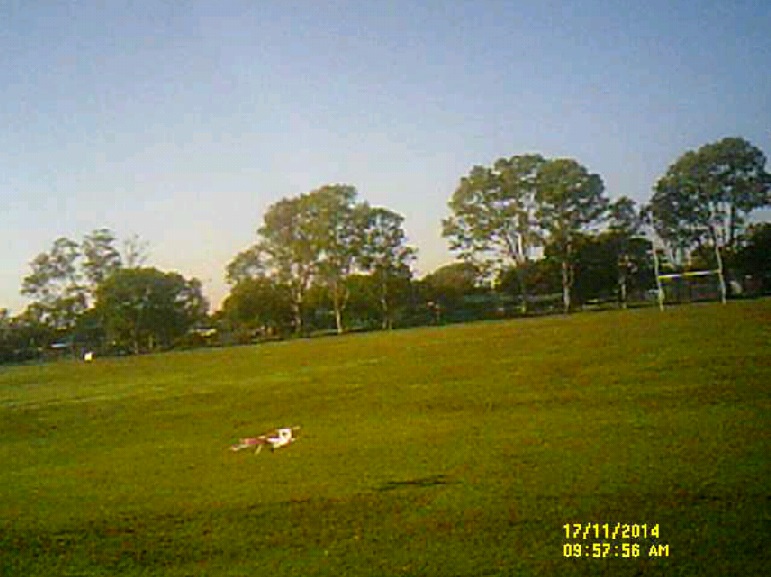 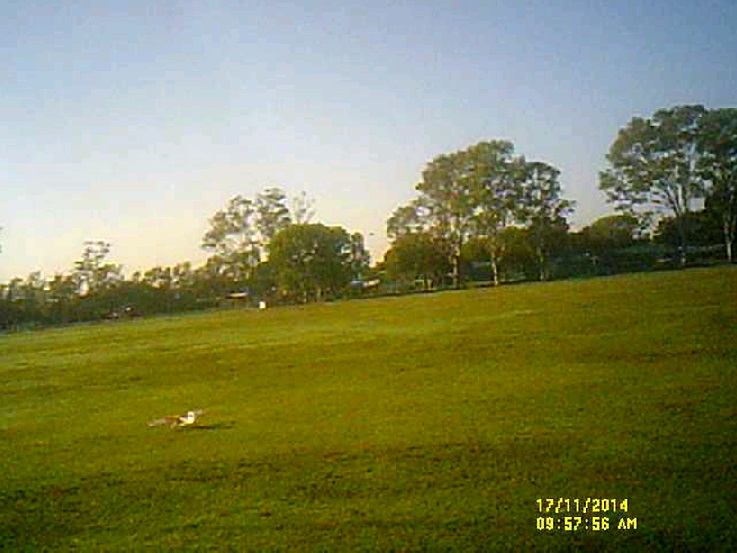 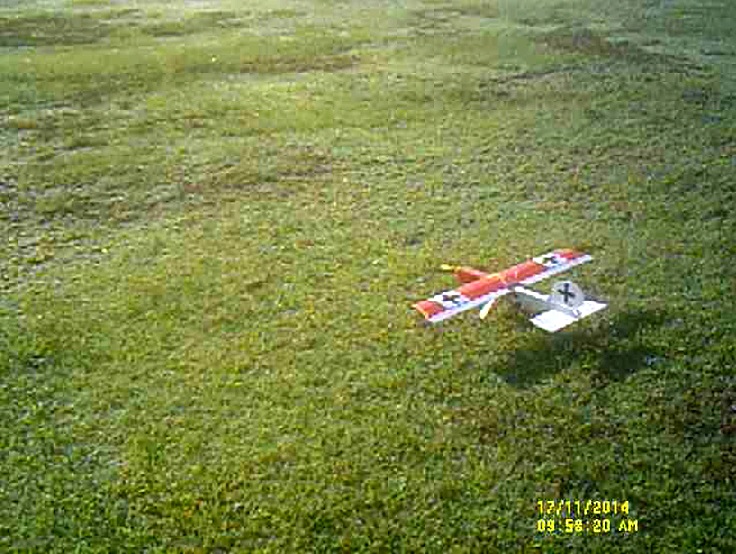 See it not only flies but the undercarriage is quite robust. The above clips were taken from the third flight video and NO repairs required between flights! Just needed to swap batteries of course!

#5
buzzbomb said:
Oh, you've got much explaining to do!!
Click to expand...
All will be revealed in time!
I thought I would drop a pic of the enlarged Motor mount on the stock powerpod as a teaser!
Much to come working on the fuselage as I monitor the forum!

#7
I'm loving it Hai-Lee! You are seriously thinking through the Challenge and creating something to beat it! That kind of spirit is why I issue the challenges in the first place, and you have taken it and run away with it! It doesn't get any better than that.

#8
buzzbomb said:
I'm loving it Hai-Lee! You are seriously thinking through the Challenge and creating something to beat it! That kind of spirit is why I issue the challenges in the first place, and you have taken it and run away with it! It doesn't get any better than that.
Click to expand...
Seriously, You ain't seen nothing yet!
Imagine a TT Climbing vertically or even hanging on its prop! Or even running a 4S with a 9x6 prop for a burst of speed! Not too many TTs run on 4S.

#10
buzzbomb said:
I am! But not as much fun as you seem to be having!!
Click to expand...
At least you now know how to fit a serious motor into your TT!

This is just a distraction as more ambitious projects starting soon!

Have fun!
Click to expand...
How do you test landing gear without a maiden?

#14
cranialrectosis said:
How do you test landing gear without a maiden?
Click to expand...
Two forms of testing!

Firstly that it actually fits and then that it won't fall off.

To test its strength I sort of drop it and also slam it at speed into obstacles to see if it trips or rips!

It so far has passed both ALTHOUGH I do not have the wing or the electrics fitted at this time! I know the final main gear will be strong enough as it is the same design used on my larger Ugly Stick. As for the nose wheel, I have plenty of epoxy and FB so it will be strong enough in its final form I assure you!

Still in progress but shows promise!

Wing assembled and ready for fitout with servos. Looking at the wing a slightly lesser span might look a little better but then this was all about a nice responsive Stick for flap training!

#16
@Hai-Lee nice build so far - I gotta try something with wheels at some point!

I am currently running a 1000kv motor on my TT with ailerons - yet to maiden it as the windy days in Wellington out number the calm ones!

#17
bracesport said:
@Hai-Lee nice build so far - I gotta try something with wheels at some point!

I am currently running a 1000kv motor on my TT with ailerons - yet to maiden it as the windy days in Wellington out number the calm ones!
Click to expand...
I normally use a 1400kV foe my minis unless speed is required. I can fit the 1200 Motor borrowed from my son but I think I will actually revert to a 1534kV with an 8x4 for the maiden. It should allow me to adjust the balance a little easier, give me even greater ground clearance, and allow the use of a lower "C" battery.

From preliminary tests the wing generates FAR more lift than the standard wings from the standard TT and that is without flaps. When you add flaps and remember that they can be "Blown" with throttle use the landing speed SHOULD be very low.

As for your weather I live coastal as well though at this time of year of it is not a cyclone, or a rain depression it is the blistering westerlies that upset flying plans. We need to do dawn flying if we are able to fly at all. It's frustrating in the extreme!

#18
@Hai-Lee great thread. I want to build myself a MUTT care sharing all the plans via PM or here?

#19
mayan said:
@Hai-Lee great thread. I want to build myself a MUTT care sharing all the plans via PM or here?
Click to expand...
Interim plans on the first post of this thread.
The plans will be updated when the design is finalised completely.

Whilst the design has no dihedral it can easily handle a few degrees of dihedral for those who like the additional stability but dihedral braces would be needed!

Should be ready for maiden next weekend, weather permitting that is!