Mentor
#1
Ever since getting rid of my Ford Expedition I've had problems carrying big planes to the field. My work vehicle, a Ford Transit Connect, was fine for carrying up to 1/4 scale planes, but not big enough for anything larger. Plus, I had to remove most of my work supplies to make room for planes - kind of a pain. The plan was to eventually pick up a 5x8 or so trailer, but that would require a tow vehicle as well... A couple days ago my flying buddy Mike told me he had a line on a 2006 Grand Caravan. It has some issues, but at $800 it was worth a gamble, so I picked it up. If I can figure out how to fold the second row seats down into the floor it'll be perfect. My longest plane is about 7' 6" and should barely fit inside. I should be able to fit two giant scale planes plus flying supplies after I build a rack in the back end. Since weather is crap around here until Spring, I'll have some time to get the issues sorted out. The biggest problems are a small evap leak and a bad strut. It also needs a good scrubbing inside to make it semi-presentable, but for the price, no complains... 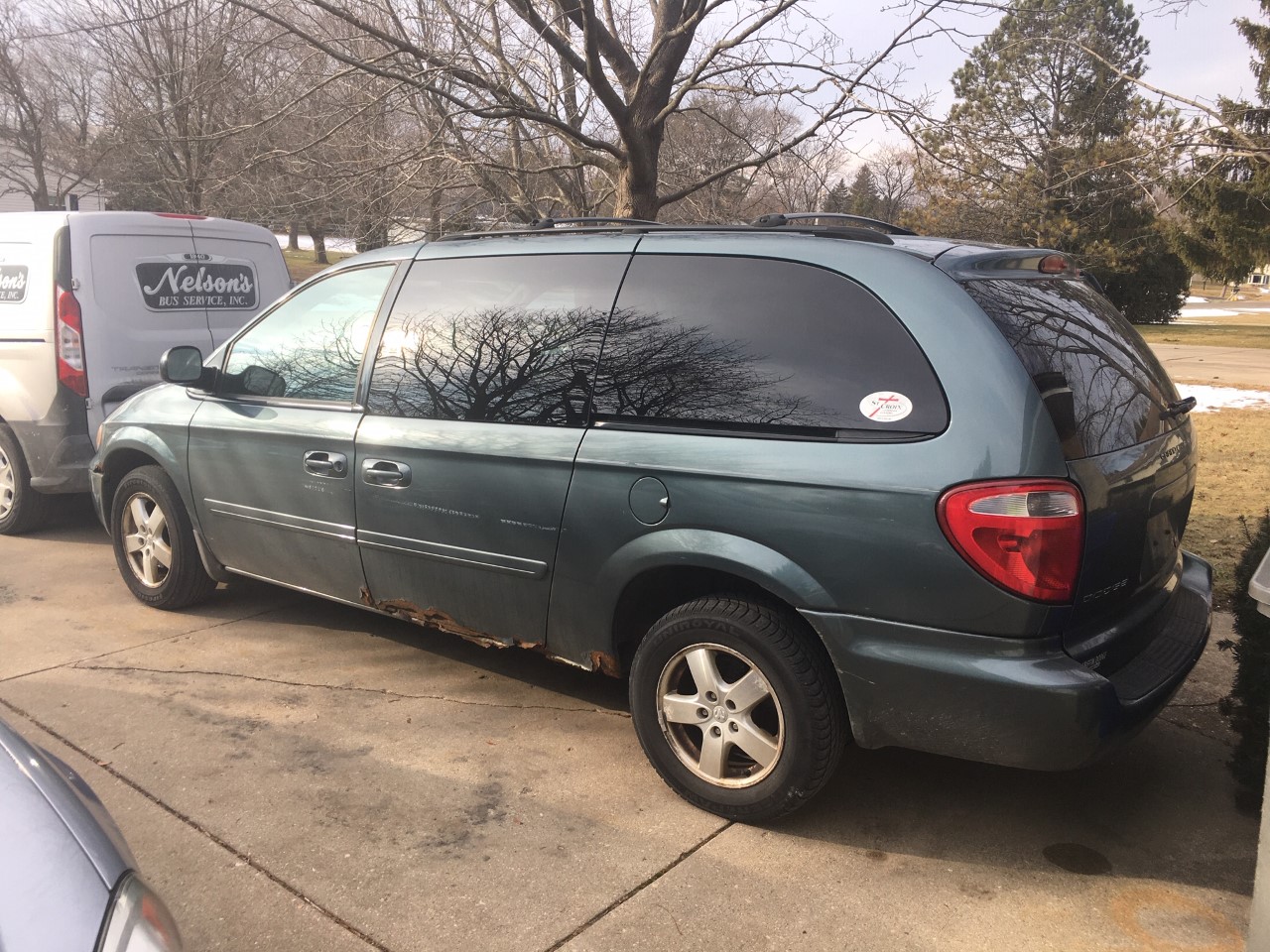 #2
Awesome! We dumped money into a trailer a year ago and we can't complain.

#3
Dirt cheap price and it's most likely mechanically pretty sound but that visible body cancer makes me happy to live in the desert where nothing rusts. I know it's normal in your area but to a lower western quadrant U.S. inhabitant rust is completely bizarre.

#4
Just throw some FPV gear in it and you got yourself a dedicated ground station! 😅

Mentor
#5
Yeah, rust can get pretty bad on the cars around here, but mechanically sound is more important to me for this rig. The longest road-trips I'll probably do with it at about 6 hours round-trip when I go to fly with my dad.

I just spent a little time with my new hooptie and scrubbed the dash and driver's area with Armorall - it was pretty nasty and hasn't been cleaned for a long time. A detail brush helped clean up the air vents and nooks & crannies, but the carpet is still covered with dirt and gravel (the previous owner had a gravel driveway). The check engine light was on, so I used my ODB-II code reader to determine it was code "P0456 - EVAP system leak detected (very small leak)". A quick look online tells me the most likely cause is the gas cap, so I looked and found there is some surface rust around the lip of the gas filler, and a dry gasket on the cap. This could easily keep the cap from sealing properly, so I ordered a new cap. I'll smooth out the filler hole a bit after the cap arrives and see if that fixes the problem. In the meantime, I used the code reader to verify there were no other stored codes, followed by clearing the codes to turn the check engine light off.

Last, I figured out how to stow the second row seats (the pull straps were hidden) so both rear rows are now stowed which gives me a TON of space for activities! So far so good!

#6
I never wanted a minivan but the wife gets what she wants. After hauling a stack of 4'x8' plywood without having to prop open the hatch I was sold.

#7
It's amazing some of the auto deals you can find. Some cars are great values and some are crap. For crap I have a 2002 PT Cruiser. Clear coat and most of the base coat gold paint burning off in the Arizona sun. Virtually everything exterior rubber has deteriorated. I've replaced ALL off the 5 speed shifter bushings inside and out with polyurethane and all but one rubber engine/trans mounts. Replace the timing belt? What a joke. Forget it. It's cheaper and easier just to leave the car on the side of the road with the keys in it. The upper dash top has cracked right down the center. I had a company car from 2002 until 2008 so the PT Cruiser has only 56K total miles on it. It's still total crap and I don't trust it. My daughter just bought a 2018 Subaru Impreza and she gave me her well maintained 2008 Scion xD with 206K miles on it. The car runs great after a few coil replacements and I'll keep it likely until I die.

Having been a jet engine mechanic in the Navy and an auto tech for over 30 years my very last auto job was as a technician for Toyota for only 4 days and I LEFT the auto service industry in total disgust because I thought Toyota quality sucked SO bad compared to the Mitsubishi, and G.M. Products I had worked on for so many years prior! Scion being a Toyota product I'm surprised at the quality difference over Toyota parent corporation cars. I'll keep this Scion until it won't run anymore. Being a Vietnam vet and my daughter and son being wounded gulf war vets the P.O.S. P.T. Cruiser will likely be donated to a veterans group and hopefully they can make a few bucks off of it..

I know what you bought is infinitely easier to work on than the P.T. Cruiser so you did REAL good on your purchase even if it may need some work in the future. The P.T. Cruiser was my very first Mopar and will be my very last ....

Mentor
#8
It's funny how people can get soured on a company for life. My dad won't touch a Chrysler/Dodge product ever again because of his ownership experience with a Winnebago Brave motorhome (on a Dodge chassis) 40 years ago. He bought it new and eventually drove it back to the Winnebago factory for them to fix the brakes because nobody he could find in Wisconsin could make them work correctly.

#9
Joker 53150 said:
It's funny how people can get soured on a company for life. My dad won't touch a Chrysler/Dodge product ever again because of his ownership experience with a Winnebago Brave motorhome (on a Dodge chassis) 40 years ago. He bought it new and eventually drove it back to the Winnebago factory for them to fix the brakes because nobody he could find in Wisconsin could make them work correctly.
Click to expand...
Hmmmm my dad has had really good luck with dodge/ram

#10
Joker 53150 said:
It's funny how people can get soured on a company for life.
Click to expand...
Yep. Kinda like how Mopar guys hate everything that isn't Mopar. Chevy vs Ford etc. and on and on..... I have no true brand loyalty and have worked on some of the worst from every U.S and some import manufactures. After 18 years of ownership the P.T. Cruiser is by far the most miserable to service P.O.S. that I have ever seen. Bad enough to sour me on the Mopar brand likely forever. It's all a matter of personal preference. I've seen under the hood of some of the later Mopar mini vans and they look fairly easy to work on. I think you got a steal for only $800.00.

Mentor
#11
I found some pics of a rack that would work with big planes. I think it’d be good for all but the biggest planes. Once the van is cleaned out and weather warms up I’ll start taking measurements. 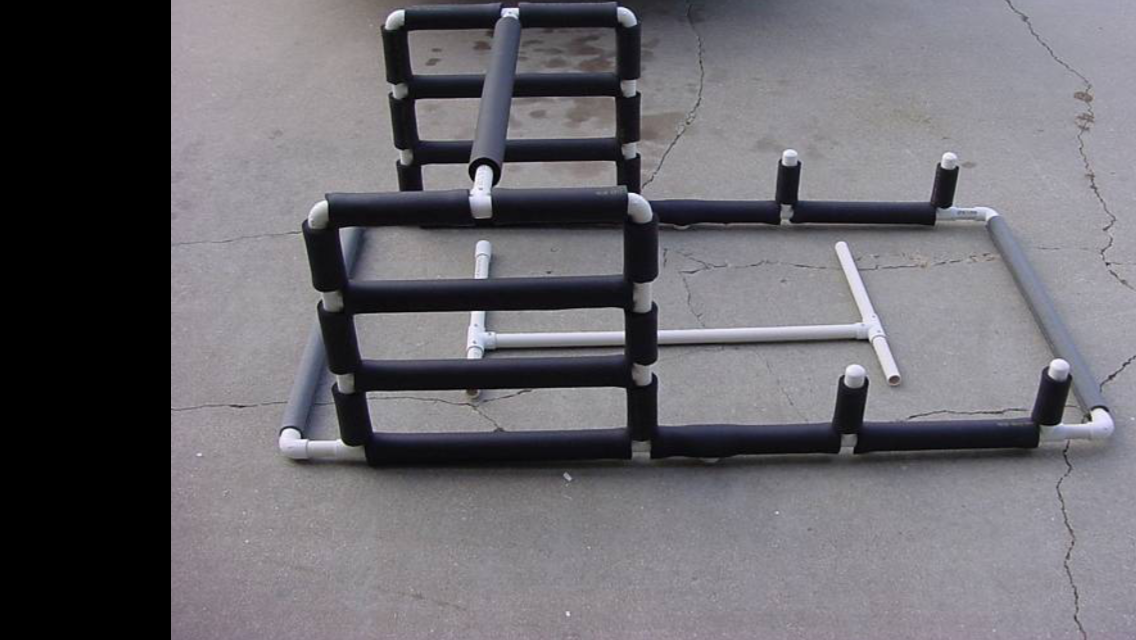 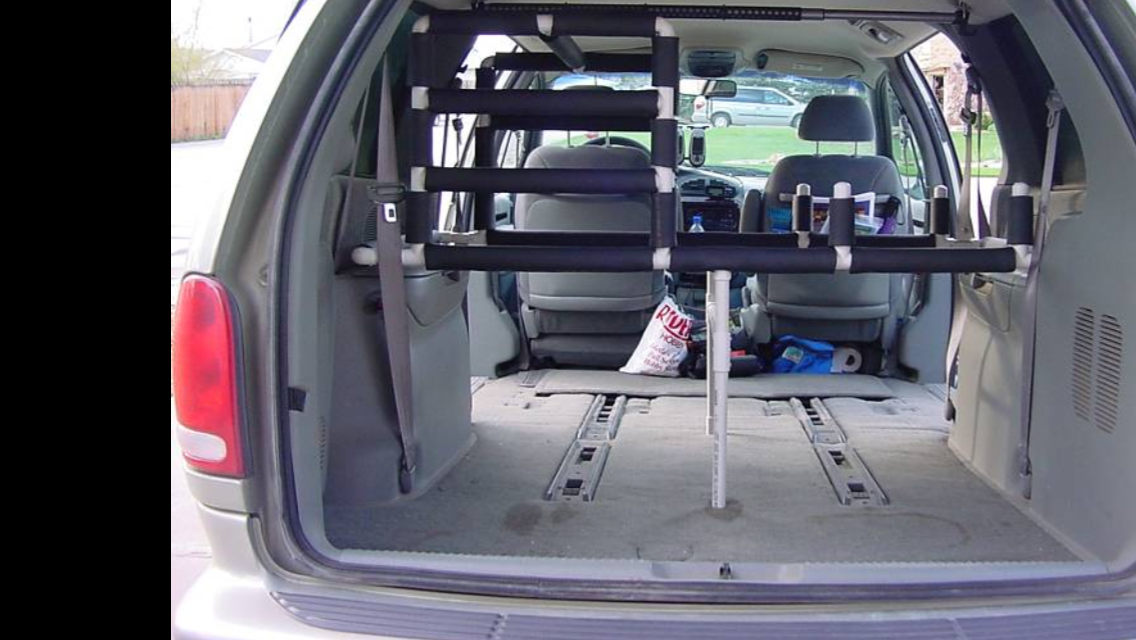 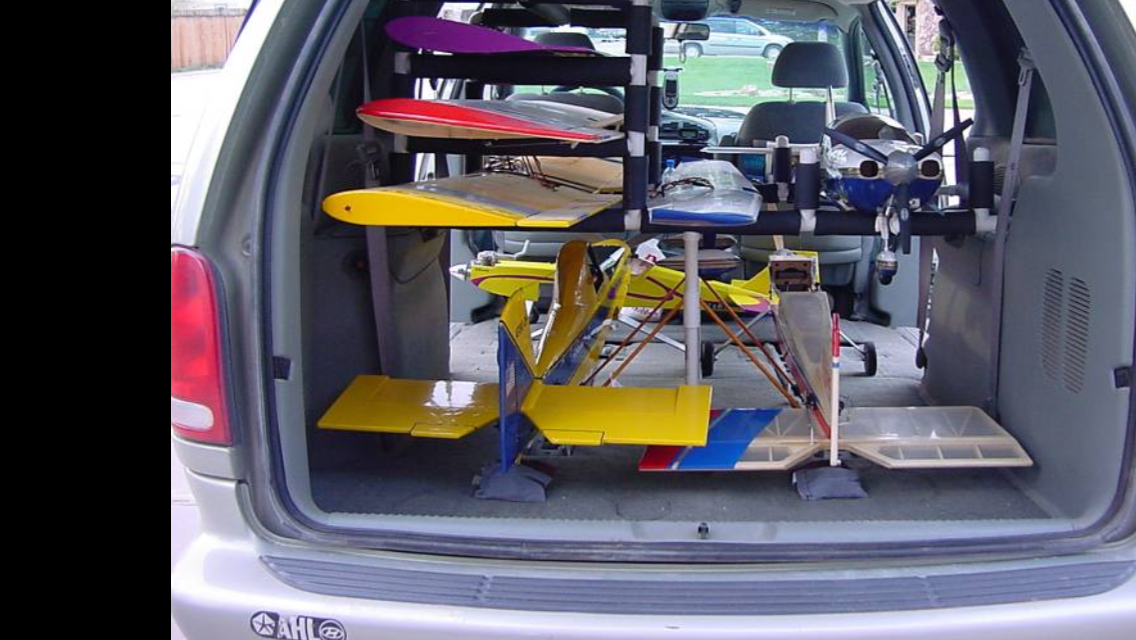 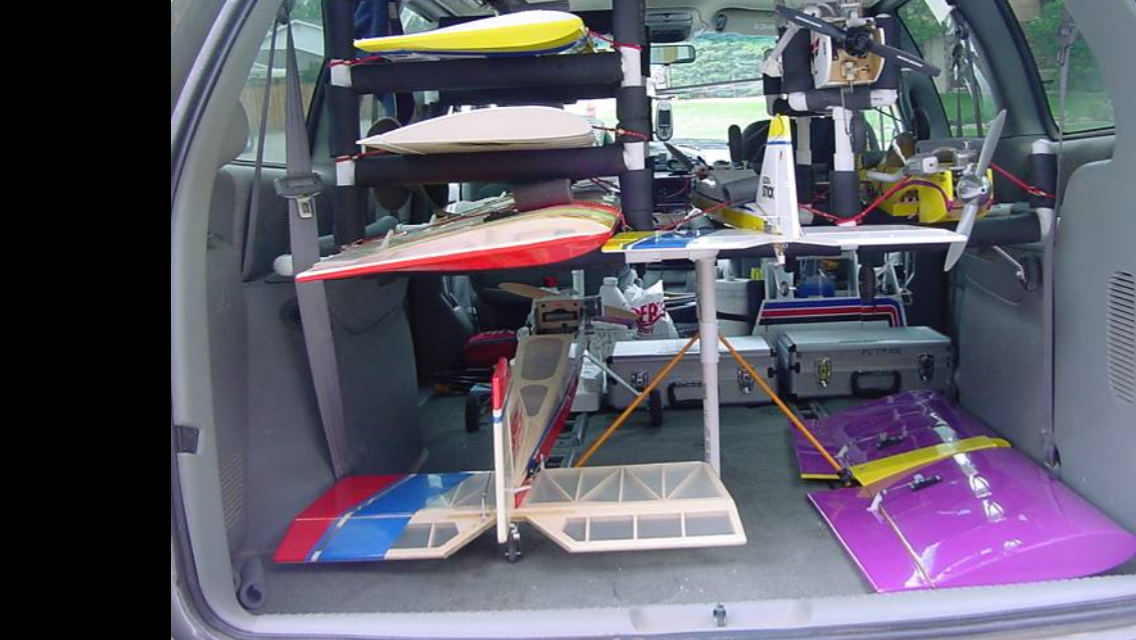 #12
Gotta love PVC and pipe insulation. So much you can do for so little money! I need to look at outfitting the Scion xD cargo area that my daughter gave me. It's a tiny clown car but she has stuffed things in there that I couldn't believe would fit. It's nothing even near the size of that Caravan but it'll have to do for me.

Mentor
#13
If you can keep the mini van as a dedicated toy hauler, consider just unbolting and removing the rear seats for even more room.

#14
I've had a few Dodge Caravans. The Stow-n-Go fold down seats are the best. It would take me five minutes to unload all my tools and put up the seats for passengers. I read the Caravan has more cargo capacity than a Chevy Suburban and you can lay a full sheet of plywood in the back. I'll take a mini-van over a pickup truck. It'll carry more passengers, almost as much cargo and the cargo stays warm and dry in the rain.

#15
mach1 rc said:
Hmmmm my dad has had really good luck with dodge/ram
Click to expand...
In our old dodge ram every time we hit a bump the whole car would shake and slowly fall apart. Then my friend Cole, his dad's dodge had the engine explode not long after they bought it new. We have had multiple dodges and disliked them all. We have had multiple Ford trucks and loved all of them!

#16
SquirrelTail said:
In our old dodge ram every time we hit a bump the whole car would shake and slowly fall apart. Then my friend Cole, his dad's dodge had the engine explode not long after they bought it new. We have had multiple dodges and disliked them all. We have had multiple Ford trucks and loved all of them!
Click to expand...
That's strange 🤔 is Cole on the forums?

#17
mach1 rc said:
That's strange 🤔 is Cole on the forums?
Click to expand...
He is not. He isn't really interested in foamies lol. He has an army of 3D gassers

#18
SquirrelTail said:
He is not. He isn't really interested in foamies lol. He has an army of 3D gassers
Click to expand...
He doesn't have to have foamies to be on here 😜

#19
mach1 rc said:
He doesn't have to have foamies to be on here 😜
Click to expand...
Truth! He isn't on any forums I dont think. He is on Instagram and Facebook though.

#20
While I despise a great many dodge/Chrysler products with a passion, I've driven many a mile in one. For the most part they've been pretty reliable. They did make a couple terrible engines, especially in the vans and cars. Can't remember what it was off the top of my head but it comes up in about any list of top 10 worst engines ever built...
You must log in or register to reply here.
Share: Facebook Twitter Google+ Reddit Pinterest Tumblr WhatsApp Email Link
Menu
Log in
Register