#1
I have been inspired by @thenated0g 's all-things-fibreglass and now especially the Ridge Rat project that he has set a-foot! So as with my Homage to flyboa's DLG's, I am planning to attempt the same thing here!

I will try and follow thenated0g's fuse and stabilisers build in FG, But I think I will add my twist with 3D printed wing sections, carbon fibre spars, and a shrink-wrapped skin! 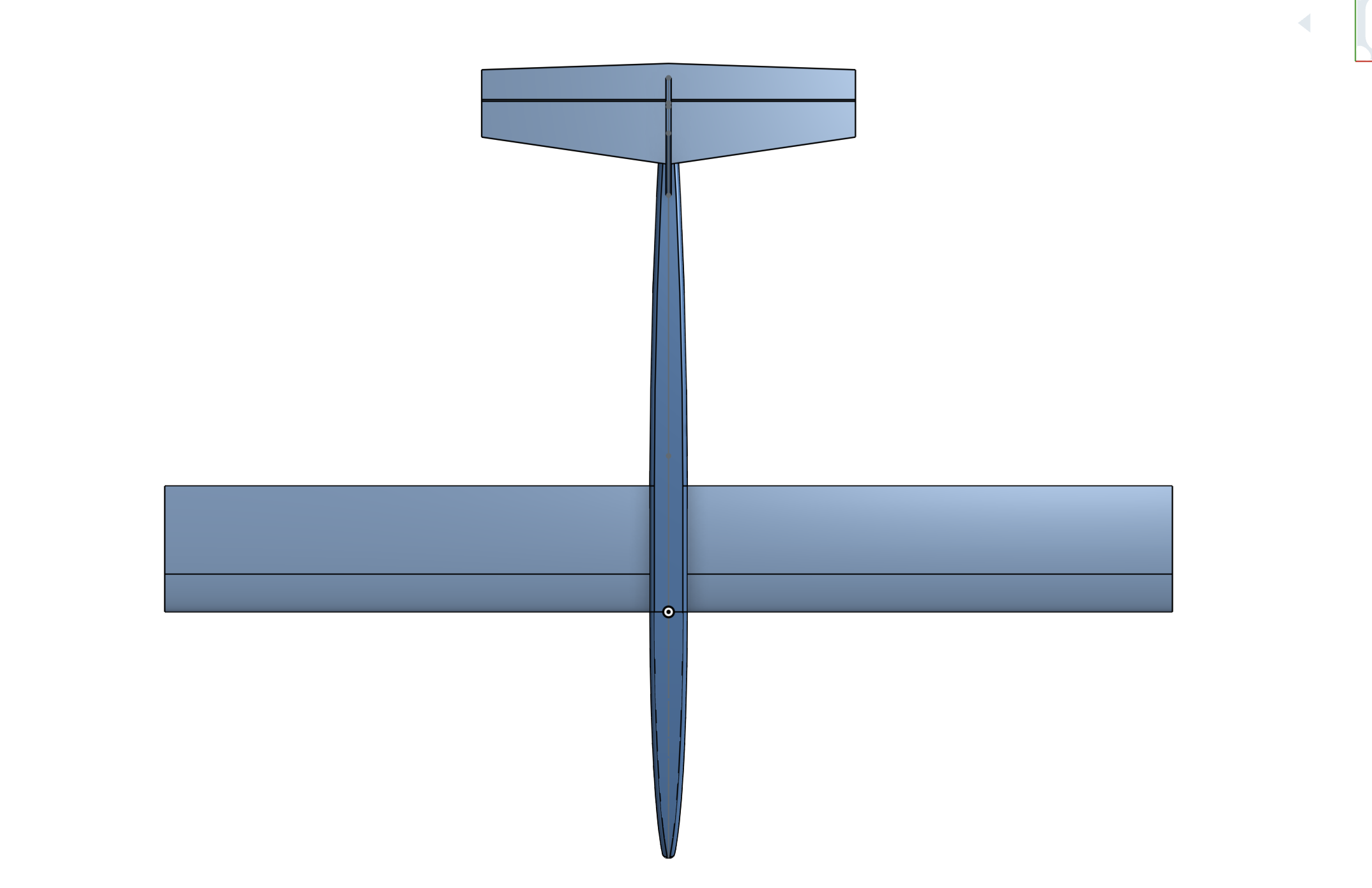 #2
Be advised that back in the day, proper Ridge Runners series were considered very fast and unforgiving because of zero positive stability. In other words, if you banked left, it would not turn but it would continue to stay banked until it hit the ground at a very high rate of speed. Which is exactly what you want in a high performance areobatic slope machine. IFIRC, they were a zero zero incidence plane that used only a wee bit of up trim to fly, and they aileron fluttered about 100mph in a dive.

Definitely something fun to build and fly.
Last edited: Aug 22, 2019

Mentor
#3
you have my blessing

Mentor
#4
Actually this is pretty awesome. One of my main reasons for sharing here and youtube/instagram is to try and share what i have freely received from other people that have shared in hopes that others will get inspired to try stuff and make videos that i than will get to watch later. So pretty awesome.

#5
@thenated0g - I agree - I have been watching your builds while building other things and it is time to get the epoxy out again!

I had a wee play with the wing design using 3D printed parts supported by some CF tubes and skinned with shrink wrap (a technique I have been keen to try)! I have been using 1.0mm skin sections on my DLG builds, so that should work well for the LE and TE.

@Piotrsko - has scared me a bit with the potential speed of this beast! 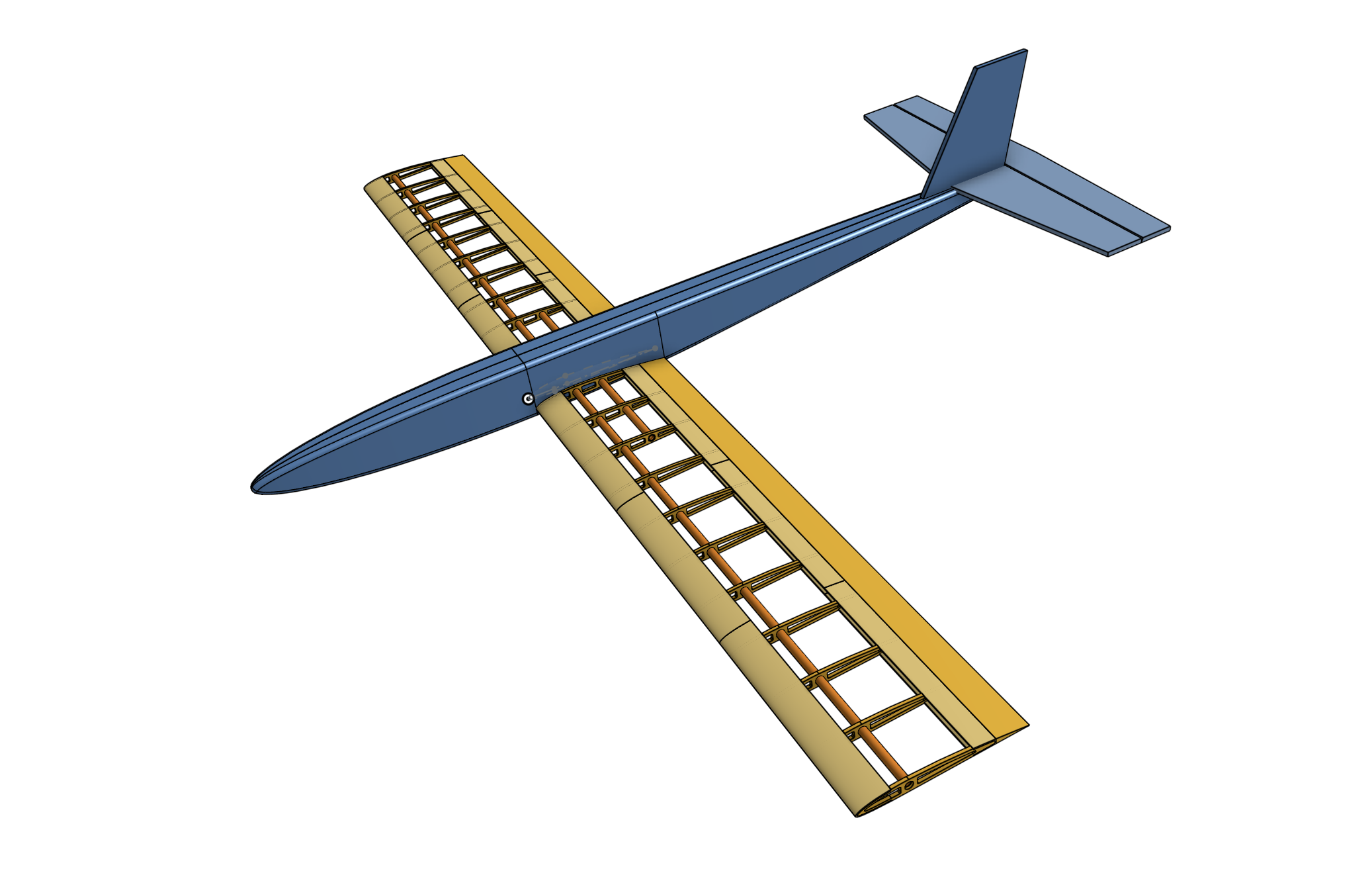 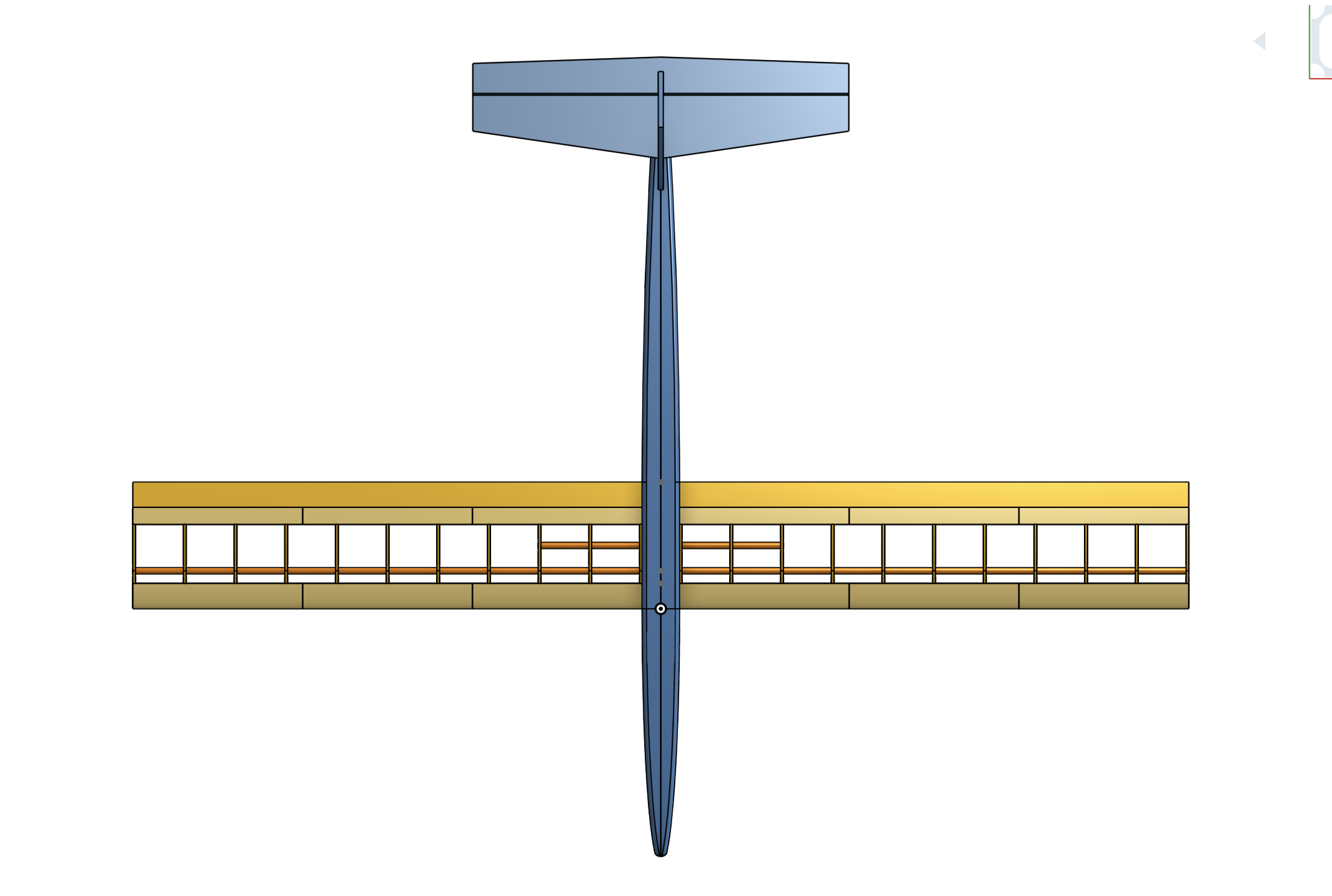 #6
I am sure there will be some issues to correct in the wing design from the pros - all advice welcomed! The wings formers are spaced @60mm intervals.

#7
Just want you to know how this could end up.
Stagger the joints on the LE /TE sheeting or do angled edge joints. Build up kits had 1 pc sheeting but there were a dozen variants including "unbreakable" (hah! wasn't) , fiberglass / foam , and ARF so I tend to lose track.
Flutter was caused by the aileron actuating system, but who goes 100mph? Stopped by tip weights.
Not sure about the MH32 airfoil, kinda flatbottomed, the originals were supposedly laminar symmetrical at some high Reynolds number

#8
@Piotrsko - I made sure the LE and TE caps were between formers so I can glue an internal cap at the joins - I am hoping that will work! I think both @thenated0g and I will put the aileron servos in the wing!

#9
I resisted until now but I agree with @Piotrsko in that I would have the sheeting done in a single piece for each wing, (no joints or weak points).
Additionally I would add some webbing to the rear sheeting to improve rigidity and thereby reduce susceptibility to wing flutter.

Not too sure about your hinging choice for the ailerons but I would refrain from tape or covering film hinges if the bird is going to be fast. If using pin hinges you would need around 5 to 6 per wing.

For balance I would be tempted to add a little dihedral so that the top edges of the wing tips line up with the top of the fuselage. Not compulsory but it would sweeten those banked turns and its overall handling, (perhaps on version 2 if needed).

If you really feel like a challenge you could split the ailerons and have 2 on each wing. Each one driven by a single 3.7 gram servo. This would allow you to deselect the inboard aileron function if required or even make the inboard ailerons into flaperons. You could even introduce crow mixing for the outer ailerons to increase the washout angle when the flaperons are selected/deployed. Mind you that is all subject to the number of mixes your transmitter can handle! 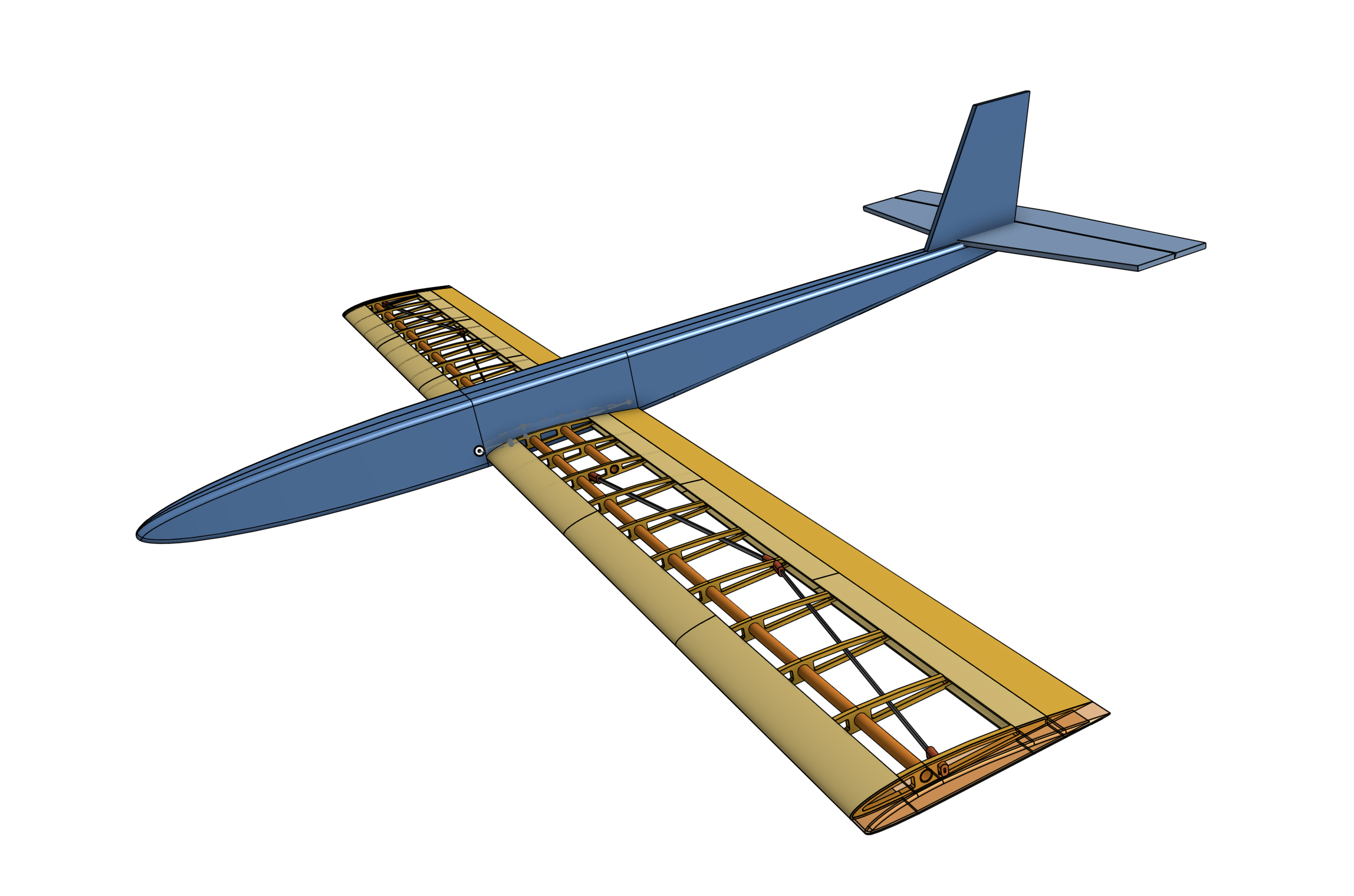 #11
@Hai-Lee - oh such great ideas - especially the split ailerons - me likey! I am planning for the wings to be removable, so some dihedral might be a good idea for a novice such as myself!

#12
bracesport said:
@Hai-Lee - oh such great ideas - especially the split ailerons - me likey! I am planning for the wings to be removable, so some dihedral might be a good idea for a novice such as myself!
Click to expand...
The dihedral suggested is just enough to give a little positive roll stability and to move the centre of mass slightly below the centre of lift. As the design is currently the build would be simple BUT the lift would be below the centre of mass introducing a slight tendency to want to roll to inverted if not careful or paying attention.

#13
the sheeting will be PLA so the joins will melt together with the acrylic glue!

#14
@Hai-Lee - here is an option with 10deg inclusive dihedral - I will have to rethink my wing mounts if I go down this path!

#15
bracesport said:
@Hai-Lee - here is an option with 10deg inclusive dihedral - I will have to rethink my wing mounts if I go down this path!

View attachment 140406
Click to expand...
That seems a little agressive as the horizontal tail is below the upper portion of the wing tips and hence you have raised the centre of lift above the centre of the fuselage/mass. A dihedral quite shallow would suffice and improve stability/handling, (you do not want "Dutch rolling tendencies)! An angle of 5 to 6 degrees would be quite adequate!

Mind you ease of build is somewhat paramount so if you think it is easier then drop the central dihedral. If you still want some handling balance you could go with a half span Dihedral inclusion for the outer wing panel only! That should simplify the wing to fuselage fixing And it could be that the dihedral angle or bend occurs where the ailerons are split!

#17
Im thinking dihederal is sacrilegious. +1 degree does solves the droopy wing appearance no effect on performance or ease of build. Doesn't use rudder, bank and yank is preferred mode. At risk of harping this to death, original design was rock solid neutral stability, like a bullet train on rails with a wicked stall. Definitely high performance. I Like the buried wing servo suggestion, solves the flutter issue, but I think standard size class metal gear servo instead on mini's or micro's. Should be room in the wing even at 8% thickness.

Mentor
#18
that is a really cool view, what program is that? i usually design my projects in inkscape as its easy and fast and profiles are usually all i need, but would be fun to try that out. I have done fusion360, but its a little more work than in need.

#19
@Piotrsko - seems I should stick with the classics wing at 1.0 deg and learn to fly better! 😋

#20
@thenated0g - the software is Onshape - it is a cloud based CAD (like google docs) - I am a longtime solidworks user and converted to Onshape two years ago - it is developed by the original Solidworks creator- fusion360 has a free package, as does Onshape - with Onshape the free version is fully functional but the files are in the public domain - I highly recommend it!