#1
After looking at kilroy07 build thread that he was doing, it got me interested in doing my version of the SR-71. But what interested me was "what happens with inlet ducting and what is going to happen if a nose cone shaped like the SR-71 is added. 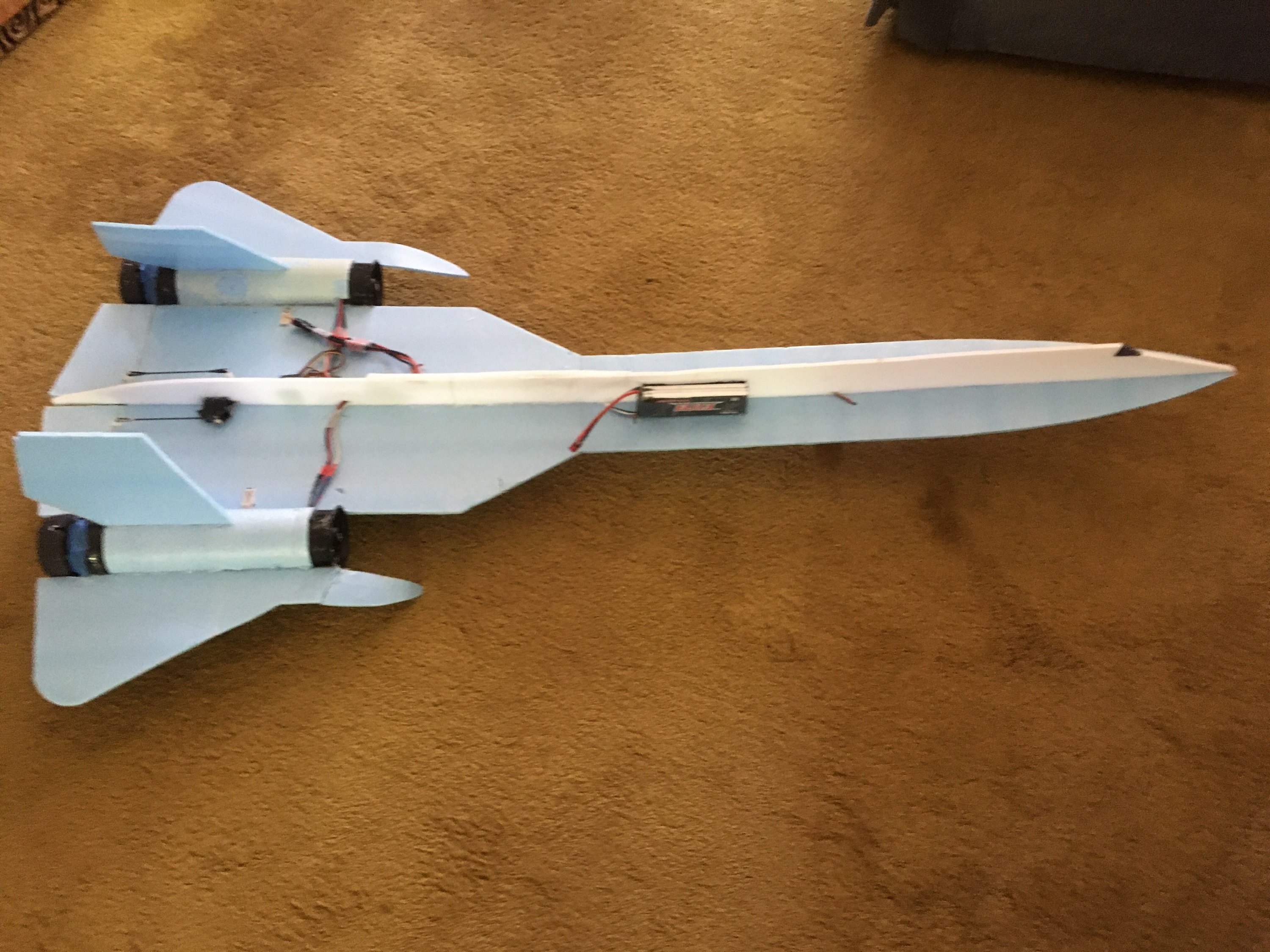 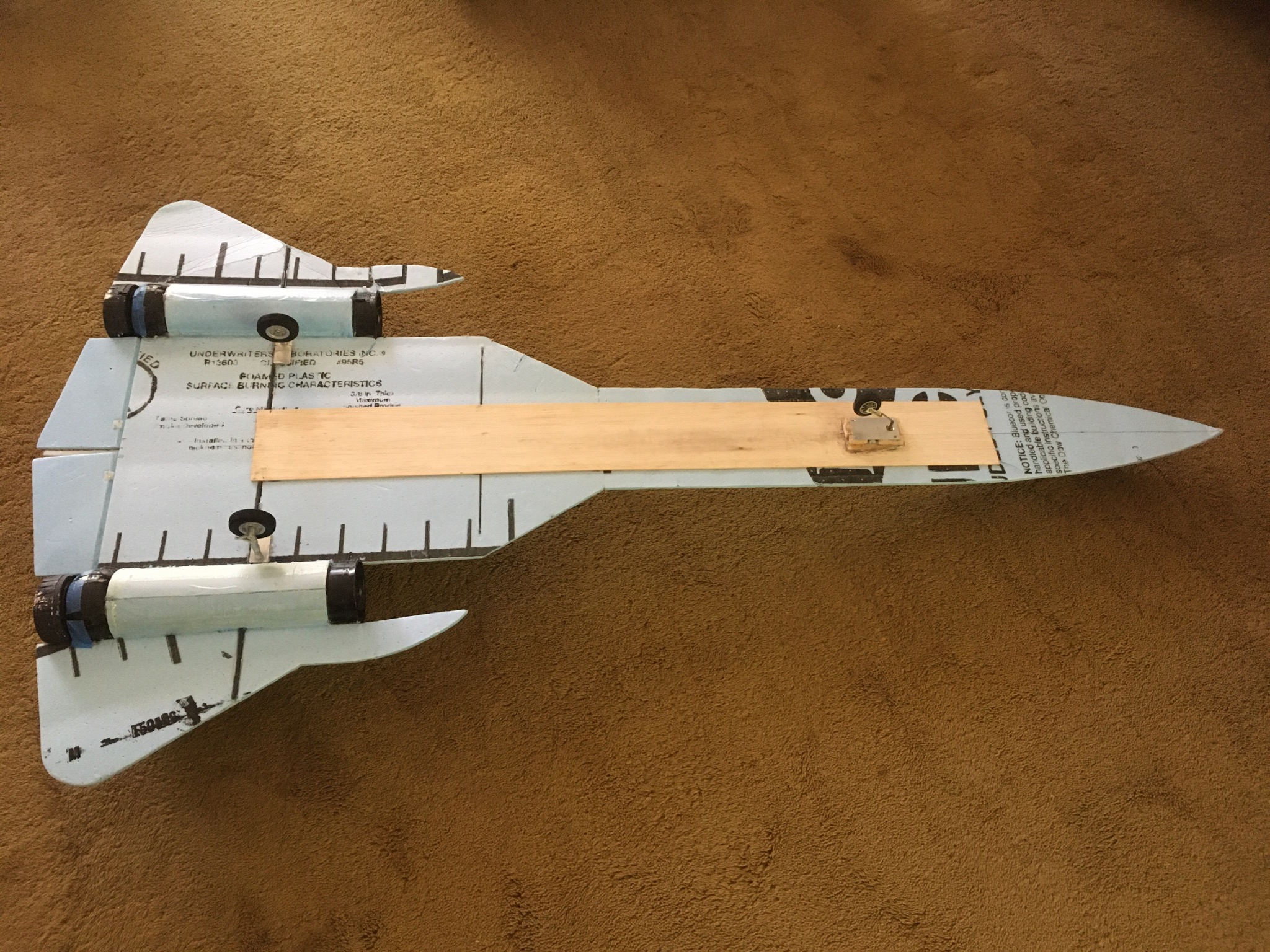 Overall dimensions are approximately 32" wide and 61" long. You will notice fans are placed so that I can add inlet ducts and nose cones in the future to see what info can be deducted. Notice that the main gear is placed over the carbon fiber rod and stearable nose gear by a servo. Since the heavy battery is place in forward area, ended up using a balsa plank(heated and then hot glued to foam) to strengthen the nose and yet be light in weight. Re-inforced neck with a second strip so it strengthen the nose and allowed me to hold for the launch. These pics were taken after flight and wrinkles were caused by the landing gear grabbing in the unmowed high grass.

CG was found by throwing it into a good strong wind and moving the battery.


"Covid" closed our paved runway at the field and it sat around in the cellar. So decided to go for it by just chucking it at the soccer field and see what happens. By watching videos like the XB-70 (pieliker96) and others, knew I needed a lot of space to fly this one and know that turns have to be wide and gentle due to the long nose.

1) Made large control surfaces for roll and pitch. Used 30% expo.
2) I have gymbal 2 dimensional ball valves for fan exhaust and to give better stability for the nose, angled those in at five degrees.
3) For yaw, differential thrust came from using a "V-Tail mixer hooke to the fans. Why that? -- requires throttle and rudder channels only, no programming needed, and best of all, the throttle and rudder trims adjust the fans so that they start together and can be synced together while flying.

Flight didn't last long due to a small field and still a slight aft CG, so after I resolve the CG issue, will try the inlet ducts and nose cone.

#3
Looks like it flies pretty nice! And it can get pretty slow too, high-alpha always looks cool.
I'm interested to see the effects of the inlet ducting.
L

#4
Pieliker96 said:
Looks like it flies pretty nice! And it can get pretty slow too, high-alpha always looks cool.
I'm interested to see the effects of the inlet ducting.
Click to expand...
I hope there is enough difference that I can see and feel it.
If you enjoy high alpha, try glueing some fixed leading edge flaps(about 25 degrees down and 1" width) and see if you get the same results.
This video is a step above where the deflection of the flap is based on position of the throttle. After 1/2 throttle and above, no deflection. Less than, it deploys where a throttle back flare is about 25 degrees down. Concept is launch, nose up quickly, then setup landing speed and come around and do your high alpha.
Now in the process of automating deflection for takeoff and landing and introducing flaps into the equation.

Here is the video showing the throttle controlling landings only. Maiden voyage, that's why it's not smooth in flight.pushing flight envelope.

Watch the leading edge flap move down and back up for takeoff(1:25) and landing(+3:00). When pitch is applied, even in turns, it tightens the manuever.


With your aero background, would you like to duplicate and join me to explore this idea? Would love to have a strain guage or pressure transducer to measure the upper and lower pressure of wing giving running data to the transmitter.

#5
Leading edge surfaces are cool in that they can effectively change the camber of the aerofoil and as such are used when a higher lift coefficient is needed (takeoff and landing, in turns)

This can be seen in the following video, along with all of the stuff the fly-by-wire system is doing to keep an aerodynamically unstable aircraft in the air (the elevons deflect downwards a bit when pulling postitive Gs at 0:26!)


Figuring out how to make an effective pressure measuring wing is a bit out of the scope of my knowledge, I think you'd be better off testing aerofoil sections in a wind tunnel. It's much simpler from an engineering perspective and is probably more accurate, and could be extrapolated to characterize any wing that used a particular cross section.
L

#6
Finished off the final test runs of my SR-71. Added a 5 inch long tube in front of ducted fan (rear exhaust is 10.5 inches) and no noticeable difference in the static or dynamic thrust.

Results:
1) Don't fly in windy or gusts conditions.
2) Needs a large area to fly. Turns should be nice and wide.
3) Keep power on at all times for good control.
4) Used aileron differential to improve right and left hand turns.
5) Have nose wheel slightly inclined.
6) CG needs to be explored to end up with a comfortable plane. It is touchy.


It's now a flyable plane and can't wait to bring it to the club field once it opens.