Thinking about moving a virtual plane into the real world. Lookin' for some tips! 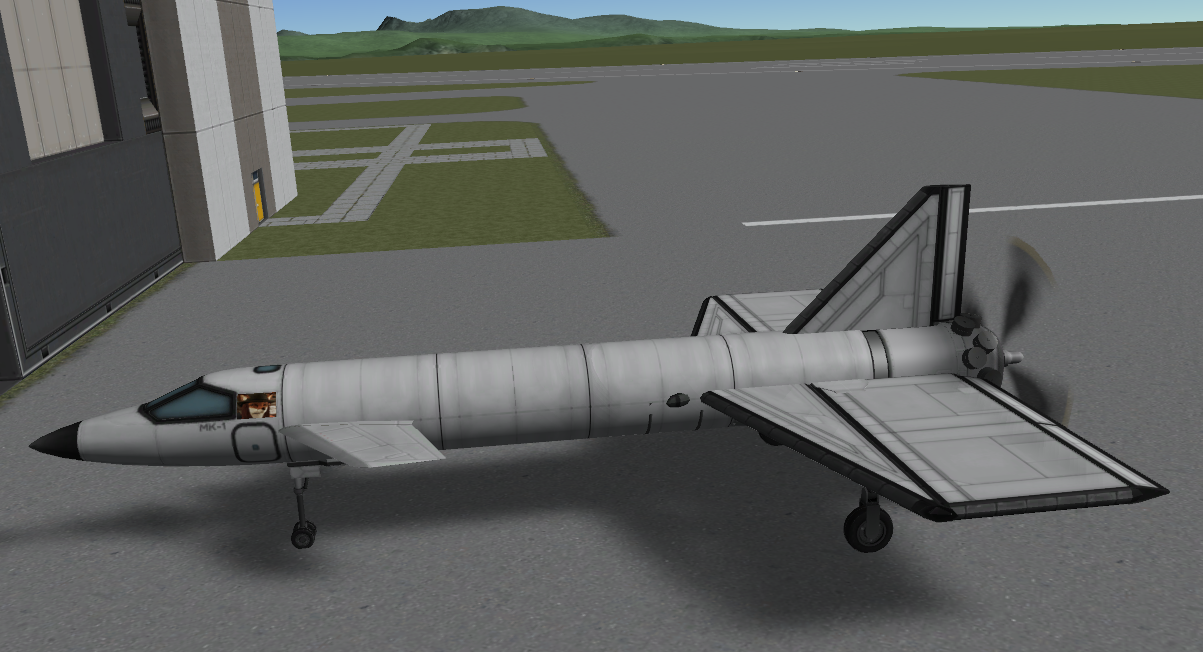 Threw this together in Kerbal Space Program and it flies like an absolute dream, well enough that I'm half tempted to try to replicate it in DTFB and make it an RC! The canards, wings, vertical stab aren't very hard to figure out, but the fuselage is making me wonder what the best way to replicate it is. Ideas I've had:

* Use a cardboard paper towel tube as a core to form the foamboard around, permanent.

* Use a length of PVC, copper, iron pipe to form the foamboard around, but only temporarily, with the former being removed after the glue has taken a set.

* Perhaps find a correctly sized heavy duty cardboard tube to work as a fuse on its own?

The cockpit's even more puzzling. I've had a couple thoughts of perhaps trying to get my hands on some conical drink cups to make it out of, problem is, it's a bit of a complex shape and the 'point' isn't at the centerline. It's a bit below centerline, to alot for the windshield and such. Might be better to get the fuse itself built, maybe even test fly it with a paper cone stuck on the nose, then get an actual 3D print of the in-game part made to attach?

#2
Love the concept. I would stick with foam wrapped around formers maybe even use a power pod for the motor.. Nose and cockpit can be shaped/carved from blue or white foam or printed as you said. Wing is very low aspect ratio so could be twitchy in roll but the length should give a lot of pitch stability.

jfaleo1 said:
Love the concept. I would stick with foam wrapped around formers maybe even use a power pod for the motor.. Nose and cockpit can be shaped/carved from blue or white foam or printed as you said. Wing is very low aspect ratio so could be twitchy in roll but the length should give a lot of pitch stability.

Good luck,
Jeff
Click to expand...
Mm, there are some minor changes that'll get made when I make it a real world craft. All those cylinders on the engine in-game are literally just lead weights because the densities of parts in KSP is all over the place(And universally too high). Necessary to balance it ingame, not so much in real life. And I'll give it a proper airfoil(KSP lift mechanics do not account for airfoil shape of parts, only that the parts have the right lines of code in their config files; you can make a cinder block produce lift in KSP). Or at least try to. I may still keep it to a fairly thin one, though, maybe one layer of foam between the upper and lower skins that'd double as a spar. Not planning on it being very large, think 'Mighty Mini' scaling.

The canards are full flying in-game and I think I want to replicate that, for both pitch and roll. I may not even give it control surfaces on the wing itself, if I do, they'll be pretty small. Won't really need them. Thing flies primarily on the canards in-game as well.

On power, yeah it'd be a nice mini swappable. I was thinking Cox 0.049 power, though, much like my Spear, my Mini Sportster, the Mini Scout I have planned, and the DTFB airboat I'm scratchbuilding as I type this. I'll try to at least get some pictures of the lines before I cut them so plans could be made, if it flies nicely I'd be happy to share the design with the community and see what it's truly capable of when given some truly punchy power.

#4
Not sure if the canards are going to give you the roll control you want, but, never hurts to try it out. .049 power is a fine choice if you are flying glow (I switched to all electric for now). good luck.

#5
Look into using model rocket tubes/nose cones for the main body and DTFB for the wings/control surfaces. I have made a custom Star Orbiter that is similar to what you are working on here and at dynasoarrocketry.com you will find similar designs to what you are working on here with suggestions for the power source if you dig other then rocket motors.
You must log in or register to reply here.
Share: Facebook Twitter Google+ Reddit Pinterest Tumblr WhatsApp Email Link
Menu
Log in
Register