When Drones attack! (or more likely, when people attack themselves though stupidity)

#1
I attacked myself with stupidity! (Graphic pictures. View Discretion advised)

(Warning: This post contains graphic images that show blood and fresh wounds and my be disturbing to some people.)

The most dangerous part of any UAV is the operator or programmer. Failure to pay attention, or double-check your surroundings, or your power systems, or your control system, can have catastrophic results for you the operator or for innocent bystanders.

SO how do we avoid the carnage?

Step 1: REMOVE ALL OF THE PROPS WHILE THE CRAFT IS NOT PLUGGED IN.

Step 2: Once step 1 is complete, literally anything else! because nothing horrible can happen.

following these 2 rules the worst thing that can happen is a shock due to faulty wires (surprising but not likely to scar you.) Or if you have long hair, it could get caught in a motor. And that’s it! Problem solved,
mic drop.

If you follow the rules above, in order, you will avoid almost 80% of injuries that happen in the remote-controlled aircraft hobbies.

(Warning: The images below will show in detail the injury that i suffered from spinning 9″ props. These images show blood and fresh wounds and my be disturbing to some people. Viewer discretion is advised.)


I was finishing up with a new UAV project in my kitchen one night and was showing it to my wife. (Yep, I had an audience for this one…) After showing her some of the cool remote-controlled features of the craft i realized that the motors were armed and thought “Hey, I’m done showing off the crafts remote features, i will just turn off the controller so i don’t accidentally bump the throttle!” Genius move, forgot about the “fail safe”.


Back story on the fail safe:
I have had crashes in the past due to a loss of signal so in an effort to avoid having craft fall from the sky like a brick, I set a “fail safe” in my receiver. This fail safe protocol meant that upon a loss of signal from my transmitter, my craft would pop the throttle to medium and go into a slow turn to allow me to regain control before it hit the dirt.​
The instant my transmitter turned off the craft sprung to life. Before I even knew what happened I had about 10 very closely spaced cuts in my arm and one very deep gash. The angle of the prop had the craft digging trenches up my arm and towards my body. What saved me was the fact that as this project was incomplete. I had not yet built a holder for the battery and therefore was holding the pack in my hand. Had I not been holding the battery, my craft would have kept going and reached my upper arm, face, and neck within fractions of a second.

once the craft reached the end of the battery wires it pulled loose of the plug and fell to the ground silent just as fast as it sprang to life. I looked down and saw that I had a gash in my arm deep enough to see my tendons, fat and open blood vessels. This was bad. I was in shock and my wife, who was watching the whole show was frozen in fear. My first reactions were pressure, elevate, lay down, so I did not pass out. a neighbor was called and a trip to the emergency room ensued.

I got the bleeding stopped and the emergency room doctor put me back together again as best he could. I have no feeling around the cut due to nerve damage in the tissue but the scar looks bad ass. (I have to create a better story for how it happened, I’m thinking “Shark attack”) 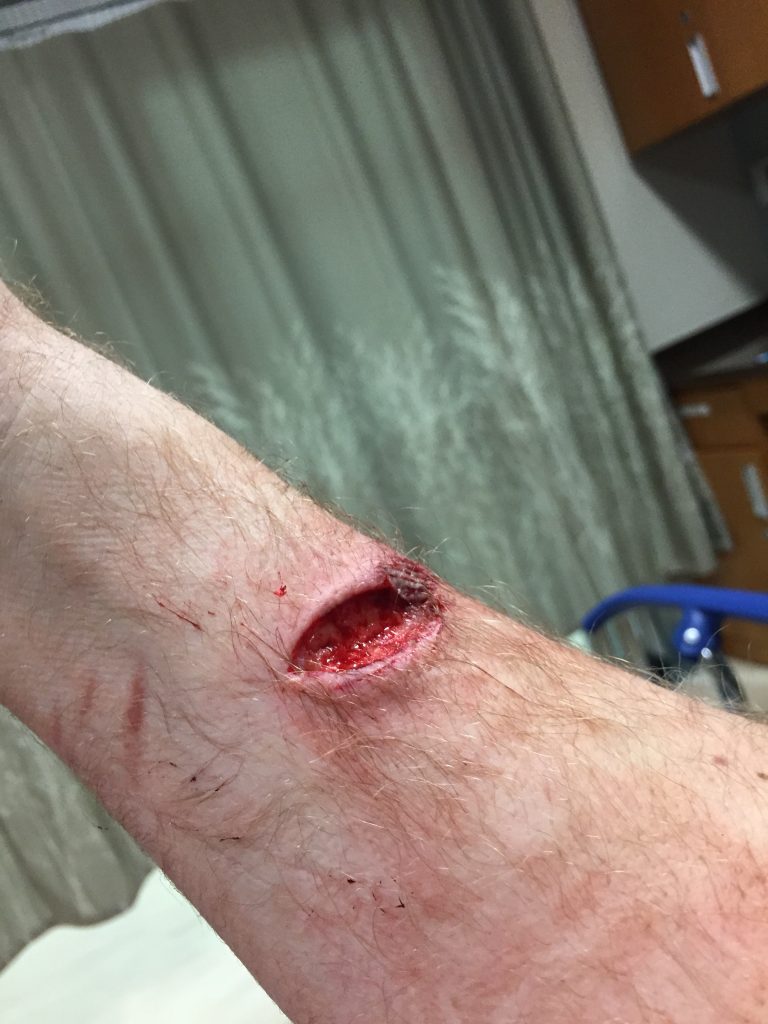 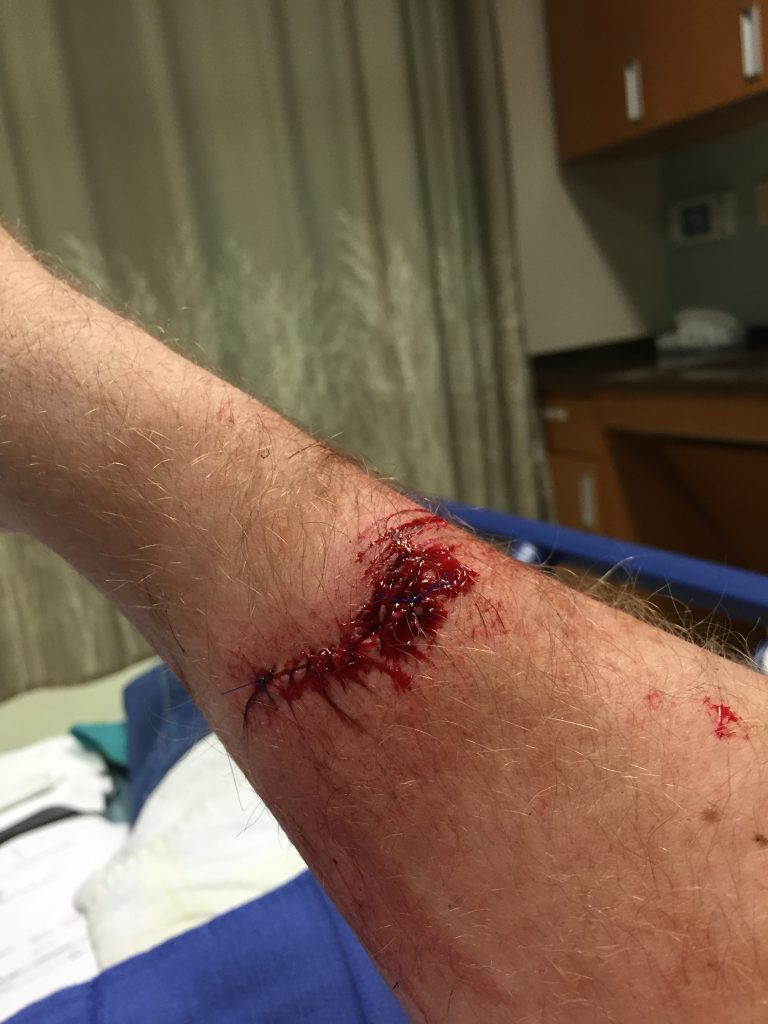 #2
I'm sorry this happened to you. This sort of thing is the reason I continually warn people about taking props off before calibrating ESCs or working on their aircraft.

Staff member
Moderator
Mentor
#3
aaaand this is precisely why my failsafes are intentionally set to "FALL FROM THE SKY".

Homekeys, Welcome to the forum -- wish it were on better terms :black_eyed:

It's sickening to see an airframe fall to the ground uncontrolled, but the feeling is FAR worse seeing it either continue to fly away in a random direction or watch it descend while being blown toward an onlooker. Very few quads have the ability to truly and safely autoland. Most of the "failsafes" will hopefully slow the descent (one of our regulars here upgraded his motors without changing the failsafe setpoint as watched his ascend away) but it has no sense of when it's on the ground.

If it flips, it keeps running and your motors/ESCs get burned.

If it lands near/on someone, it keeps running and they've got a chance of getting hurt.

If it falls from the sky, so long as you weren't flying over someone, the damage is isolated to your gear, which can all be replaced.

I never give my quads full autonomy -- if they can't hear me say "Don't do that" via the remote, they should fall from the sky. Every second they think for themselves and keep flying is a second they can stupidly drift toward endangering someone.

Heal up and get her back flying again . . . and stay safe out there

#4
No pics of the bloodied props!? shame... I think rabid UAV attack sounds cool enough. Just name the thing SkyNet after this.

Mentor
#5
Ouch that is one major chunk taken out of your arm. I looked at some more pics on your site and am glad to see that it healed up well. My mini quad is configured to run with a low throttle for about two seconds before the motors cut out, but now I'm considering going straight to cutting the motors.
You must log in or register to reply here.
Share: Facebook Twitter Google+ Reddit Pinterest Tumblr WhatsApp Email Link
Menu
Log in
Register