#41
rockyboy said:
1306 2000kv motor, 6 amp esc, and 5x3.5 folding prop are the power bits - receiver is a FrSky x4r and I believe the servos are 2.8 gram - but they are el-cheapo blue ones from fleabay that have been in the back of the drawer for a while. Nothing really special - the receiver is the most expensive part in there!

Tentative color scheme below so the covering lines up with the lighting colors. The green and yellow will be translucent Solite, and the white will either be opaque Solite (if the LED's shine through enough) or clear doculam with a light airbrushing of white paint to create a semi-transparent effect.

View attachment 193714
Click to expand...
i'm torn between ordering a 350mah 2s or a 400mah. I want to have plenty of power to get out of tough situations as this will be second balsa gliders (the first one was severely underpowered and suffered a violent death because of it) what battery are you using?

Mentor
#42
I'm going to be going with a 2s350, and suggest you'd be better with the lighter weight of the 350 vs the 400. To get more power via battery selection you'd need to go to a 3s battery, but I think that would be way overkill on this build. A safer way to get more power would be a 14xx or 16xx motor still on a 2s battery - you could get more thrust on a larger prop while still keeping the RPM lower and not tearing the wings off. 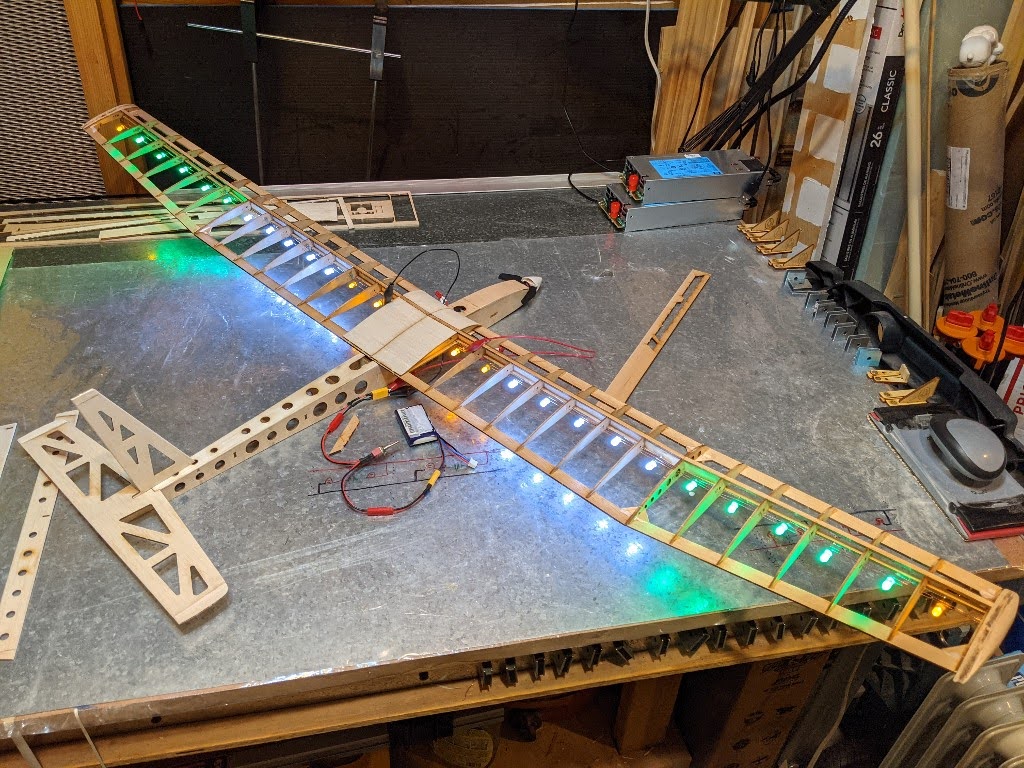 For the white section I tried some opaque white covering and it just didn't let enough light through compared to the transparent stuff that it would be next to. So I lightly sprayed some rattle can white paint on the inside of a couple feet of doculam and applied that instead. 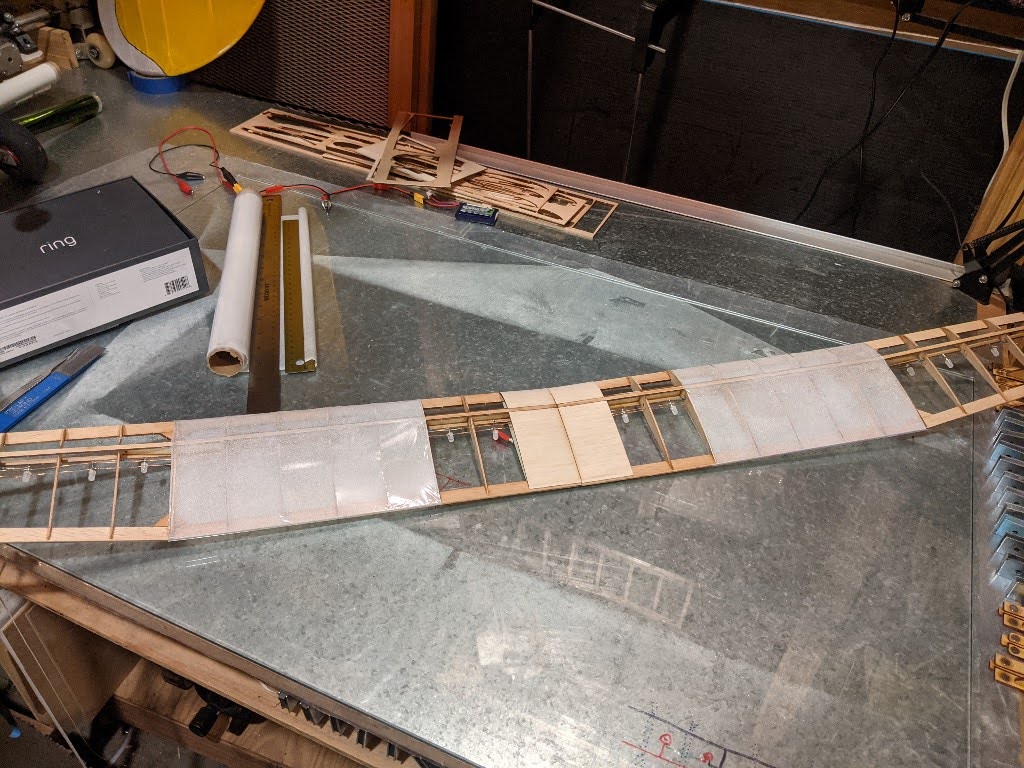 Getting close with the covering now. Just need to finish installing the rudder, both control rods, and then seal up the bottom of the fuselage. 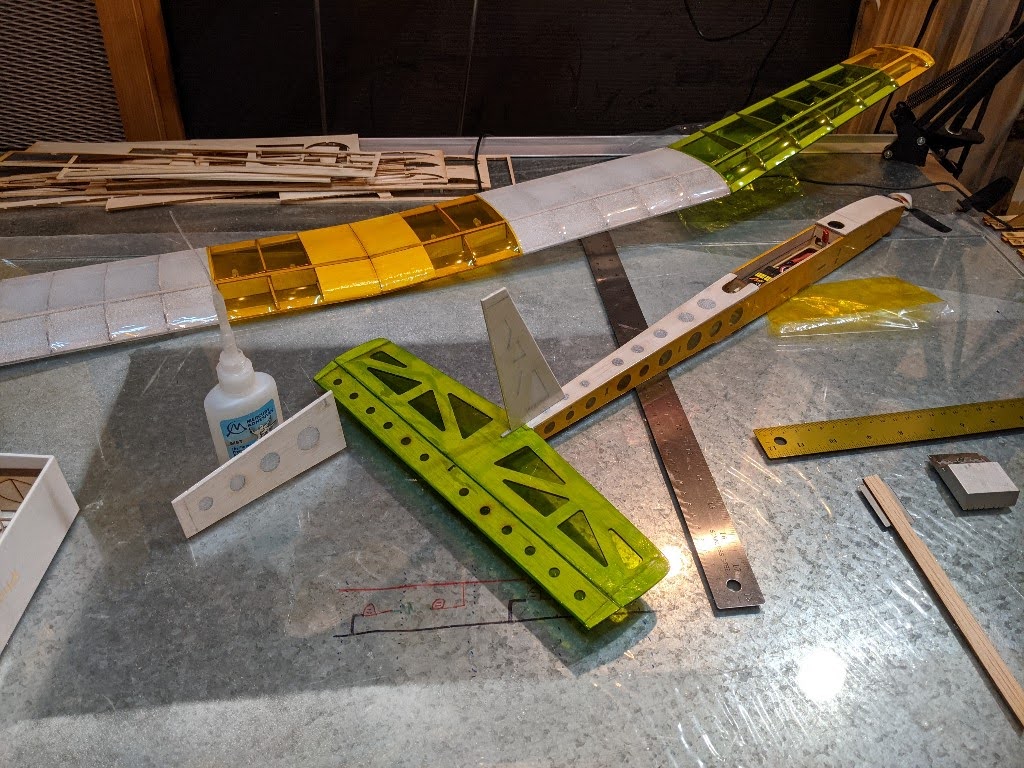 Mentor
#44
She's a little heavy at 8.9 oz, with 3/4 oz of lead in front for balance - sort of expected that with the lighting. The blue tape on the hatch is because the hatch latch piece popped free as soon as I put in the first battery at the field. 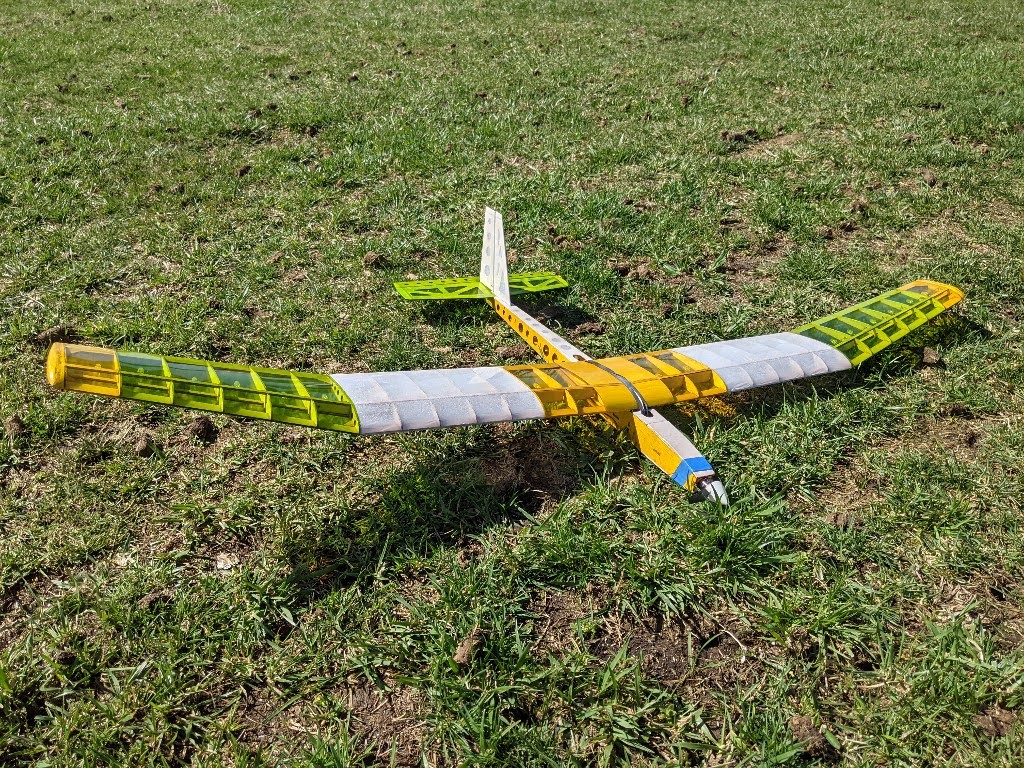 But she flew! Twice! On a windy day when the DLG guys were adding extra balast! Honestly, she struggled with the wind and I'm really looking forward to flying on a calmer day so I can see if she's balanced well. She might have been a touch tail-heavy still, but two safe landings is enough to move this project from the "to-do" pile to the "go fly" pile

Sadly however, my !%@$ Runcam only recorded a corrupt 0 byte file instead of a video. I really need to get a new camera.
J

#45
rockyboy said:
Wing assembled and glued with the swept back tips this time - it will make the plywood angled spar that holds the sections together fit a little funny, but I like the look of it this way.

Also shown are the led's and resistors generally put in their spots. I'm using the existing guide hole as the place for the resistors to go - they glue in there with a little Super Phatic just fine. The extra balsa sticks are just holding the resistors straight until the glue dries.

Also took advantage of having a plastic sheet over the workbench to lay out the wiring diagram with a marker. The reason I'm doing them in little pairs has do to with the voltage drop from the leds, and wanting to run this plane on a 2s battery. Basically, each led is causes somewhere between 2 and 3 volts of drop when in series (depending on color) so by wiring them into little paired cells they will still have all the volts they need even when the 2s lipo is empty and ready to land. This is also why you can easily find led power supplies with 24 or 48 volts - they can run a longer series of lights on fewer resistors and less complexity. As for the odd location of the resistors, they don't specifically need to be in front of or behind or between the led's to work properly - it just works out nicely for wiring across the ribs to have them in between.
Click to expand...
I really like those magnetic hold downs you’re using. Where can one purchase those?
You must log in or register to reply here.
Share: Facebook Twitter Google+ Reddit Pinterest Tumblr WhatsApp Email Link
Menu
Log in
Register