**Please read the Hints and Tips at the bottom before printing and building!**​
It is advisable that you download the full plans and have them available for viewing before beginning your build. You will need them for reference as score lines as they are not represented on the skin kits. These are not for beginners! You must be comfortable with the flite Test build method. I would also advise you build a mini P51 before attempting this. I learned much from my first build.

Download and print the skins yourself or get full sized printed skins and plans (No tiling needed!) right to your door!
Go to www.Fliteskins.com. 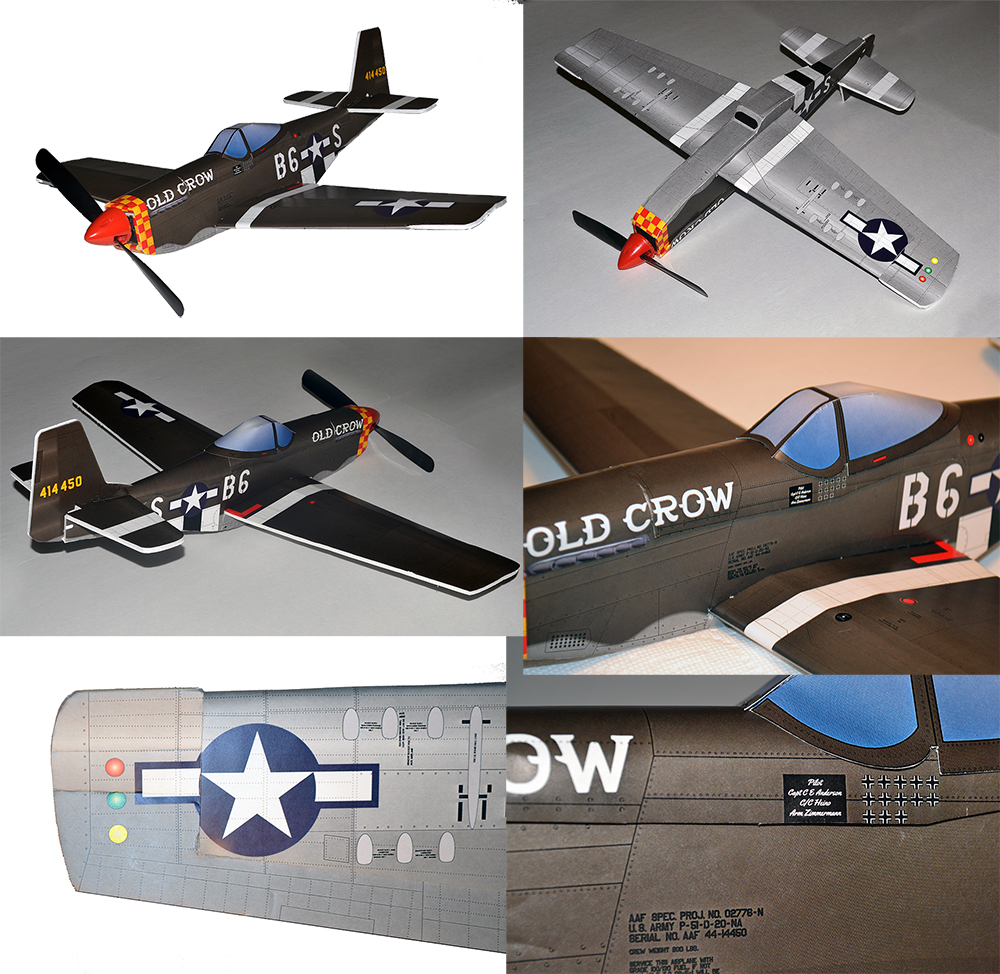 “Bud” Andersons P51 Mustang “Old Crow” Clarence Emil "Bud" Anderson (born January 13, 1922) is a retired officer in the United States Air Force and a triple ace of World War II. During the war he was the highest scoring flying ace in his P-51 Mustang squadron. This was the same squadron as well known test pilot (and first pilot to break the sound barrier) and ace Chuck Yeager, and they have remained lifelong close friends.[1] Towards the end of Anderson's two combat tours in Europe in 1944 he was promoted to major at 22, a young age even for a highly effective officer in wartime. After the war Anderson became a well regarded fighter test pilot, and a fighter squadron and wing commander. He served his wing commander tour in combat in the Vietnam War. He retired as a full colonel in 1972, after which he worked in flight test management for McDonnell Douglas. A member of the National Aviation Hall of Fame, Anderson has remained a sought after speaker at aviation and military events well into his 90s. 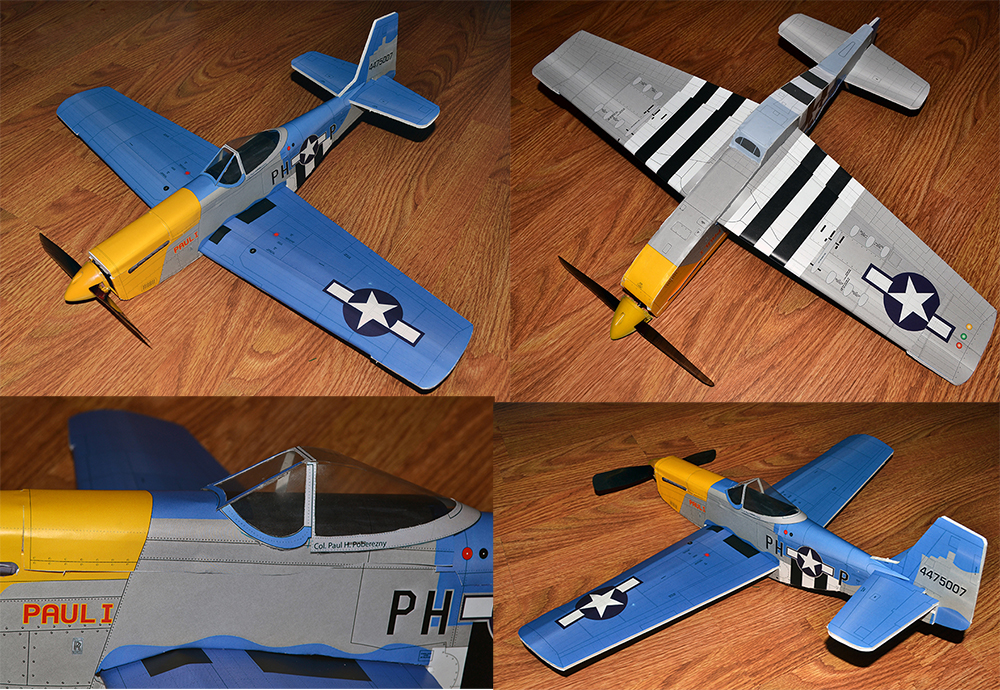 Paul I is a P51 currently on display at the EAA Museum in Oshkosh, WI. This aircraft belonged to the late Paul Poberezny. Paul was widely considered as the first person to have universalized the tradition of aircraft homebuilding. Through his work with EAA, he had the reputation of inspiring millions of people to get involved in grassroots aviation.
Note the different color on the bottom/back of the fuselage. I had to reprint that part on a different printer and, no surprise, I got a different color. Something to consider when you decided where to print your plane. I also edited the blue stripe on the fuse in front of the canopy to make it extend more down the side of the fuse to look more like the full scale. 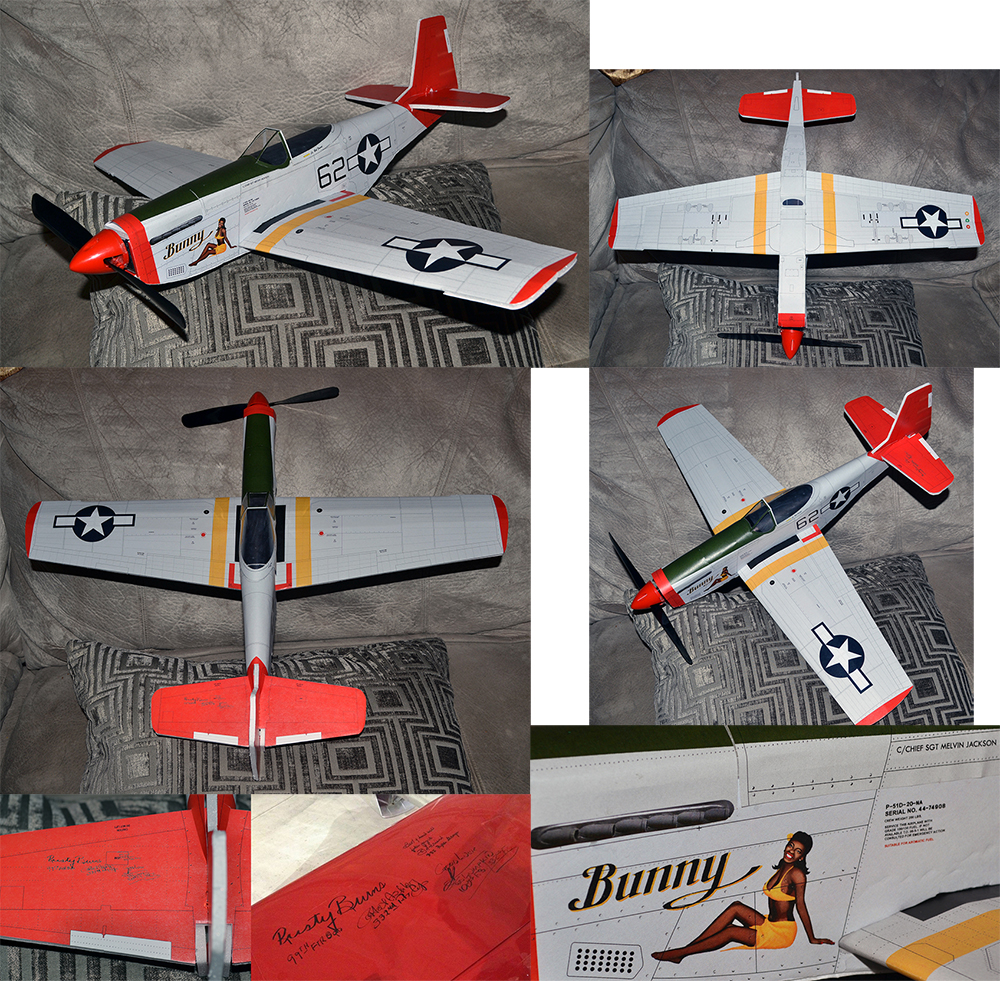 A P51 that, when not flying, can be seen at the Palm Springs Air Museum. In 2012 the plane #8217 exterior was painted with the markings of the P-51 flown by Tuskegee Airman Lt. Col. Bob Friend. On February 28, 2015 “Bunny” was unveiled with several Tuskegee Airmen in attendance. These heroes signed the top of the left stabilizer something that is also reflected on the model. I also love the fact that this aircraft continued the tradition of having a pin up girl on the nose. Bunny is scheduled to be available for rides in the Spring of 2017.
Note: Since there is no real silver printing in CMYK, I did Bunny in a light grey. The up side is that the details really stand out!

Likes: shepherdcala, The Hangar, dani1390 and 9 others

Amazing detail and ease of use!!

Rasterize
Thanks for the kind words cochise99! Glad you found them useful.
They are amazing. I would love to talk to you about some new designs.

Rasterize
I'm all ears. Hit me up at fliteskins@gmail.com Always looking for new ideas. :)
Super design and graphics, thank you.

Rasterize
Thanks for the kind words Scott! Glad you like the skins!
Excellent as always!