#1
While going thru FT thread's, ran across JGplanes-White Diamond". Simplistic, strong, fast and being a different designed airplane, wondered if it could be adapted to my 64mm EDF and add a thrust vectoring unit to it.

So,after conversing with JG, here is the story of how I am attempting how to do it.

Decided that in order to accomplish that, needed to expand size. Being old school, laid it out on paper(see his simple 1 page drawing) and using same angles, ended up with a length of 30 inches and a width of 26 1/4". I use blue FFF with a double sided film on it and black markings that over a period of years, will not come off entirely. Hence your model needs to be painted at which I am not talented. I use packing tape instead.

Having a fleet of 64mm EDF's planes ranging from FSWings, Bobcat's, F-22 with thruster's, transports, STOL's, etc., so when I saw the total area, knew it would be the right size. I have purchased and used 70 and 80 EDF's as well, but looked at weight verses wing area, I chose the 64. Being totally unsure on how it would fly, decided to make two. Start with a prop driven and then switch to the 64.

Over the years, my "go to" motor is an E-Flite park 370 1360kv using a prop from 7-9" prop and the one I am using is a APC 9 x 4.5 MRotor since it act differently than the SF's. JGplanes speed is much faster than mine, and I did not feel the need for speed, but can I adapt it to an EDF?

Problem 1:
Where is CG? -- Looking at it, I knew my motor had to be behind the prop so knew I had to jockey all electronics, servos, (not battery) to make it come out right, so I don't have to add weight. First thing I did was cut out pattern following JG's video. Here is his build.

#2
Scaling up was easy but introduced new problems at usual. 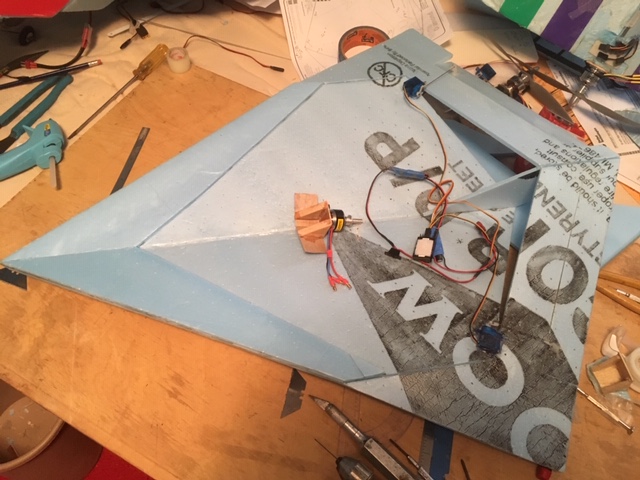 To keep plane light, glued elevron servos to plane and horizontal stab so it had short arms to control horns. (re-enforce stab) Then turned motor mount around which includes "UDDER RUDDER" to give a high response rate and improves stability at slow speeds, high alpha, fly inverted, windsurfing and other acrobatic moves. 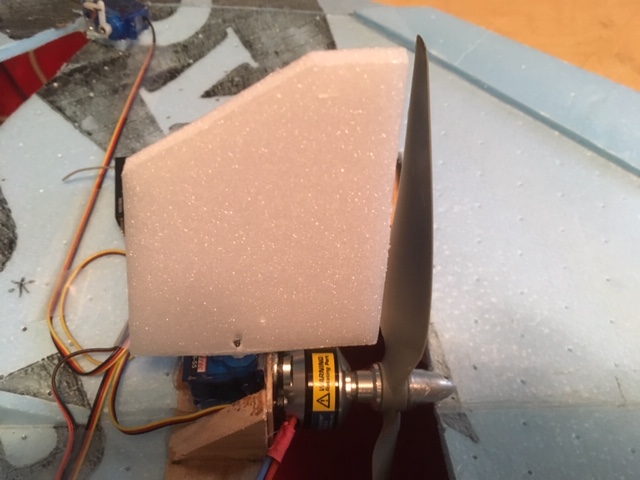 Mounted the motor support to the top surface of the wing and used a Hitec Hs55 servo and a large servo arm, hotglued depron to servo arm and you can see small hole punched so that screw can be installed. Found the CG to be 13 1/8' back from the nose and balanced the electronics and battery.

Here it is, put together, ugly (can't paint,lack touch) ready to go. I call it "diamond in the ruff". Looks ugly, but it is a winner. Working on producing a video. 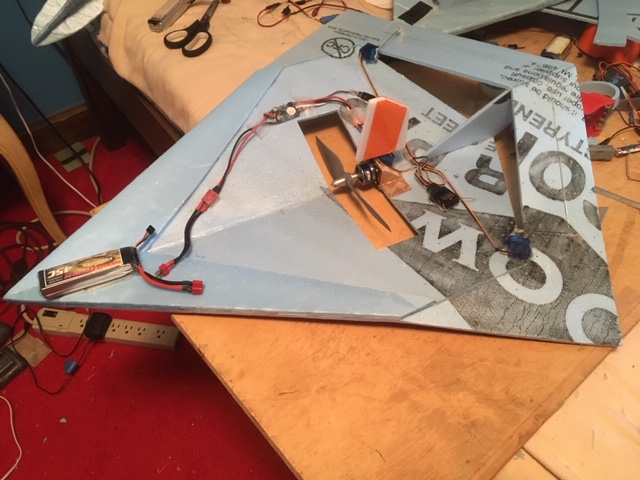 I enjoy exploring things normally that aren't used or released yet and here is one to see it's use which very few pilots use. How about using
"negative expo " .

Explaination:
When you fly the diamond at slow speed, the flow across the "udder rudder" decreases sharply, reducing sharply the amount of yaw control. So when you are in high alpha for instance, it become ineffective as the prop speed is reduced, unless you can get a pulse a high deflection immediately to insure yaw. Now enter the negative yaw. 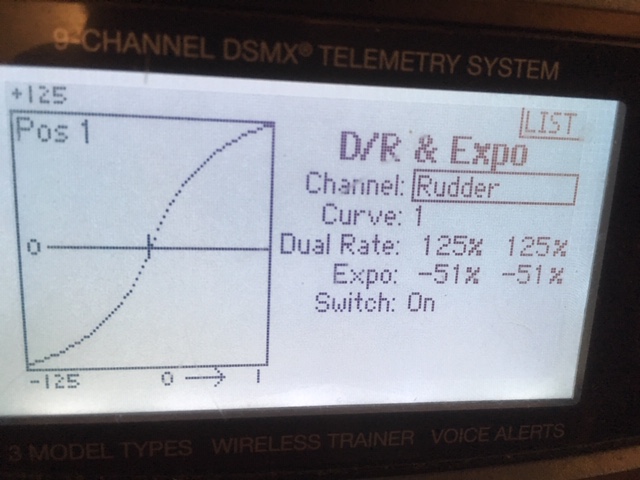 Yes, by pulsing the rudder, it is a way of allowing a large deflection at providing a necessary force to steer the plane when the prop is turning slow. Took a number of runs to find the correct force to match the movement of the plane.

Has anybody ever use this and how did they apply it? Usually pilots want little movement about the center to fly smooth, here it is great movement. Requires a new process to flying.

Now on to the 64 EDF version which is already flying with a thrust vectoring system.
Last edited: Aug 2, 2019

#3
Here is the start of the conversion to EDF. 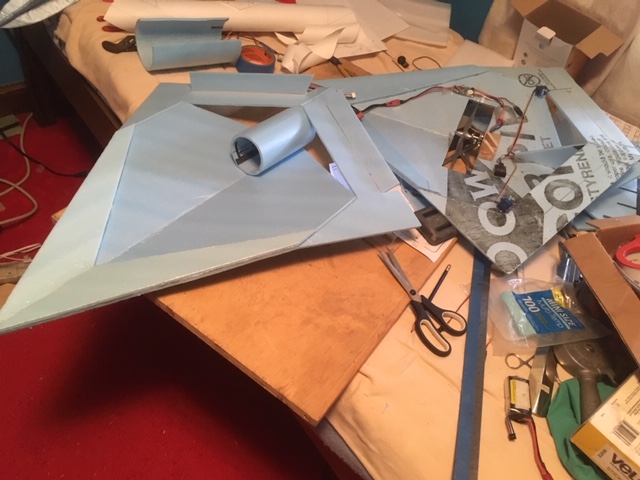 First problem was the dia of the EDF was higher causing the horizontal stab to be inclined steeper.
Last edited: Aug 6, 2019

#5
Here is the video of the prop version.

Important point: Forgot to mentioned that found CG to be right on, but also balanced fuse to even weights on each side of fuselage. Does count in sharp turns. This was done by positioning battery on velcro.

Really like the design of orginal plane. Only bad feature is going fast, a far distance away, you need to watch what is going on since little vertical height of the plane. So I am going to give it a 9 out of ten.
Pros:
Leave it alone, and it will right itself.(large dihedral) and you can gain control once again.
Goes fast and slow!!!!
Flew it inverted and with enough practice did a figure eight.
Winds were from 4.3mph to 14.6mph(windsurfing meter) gusty and perturbations caused by tree surrounding field. Plane kept its stability and was controllable at all times.
Was able to windsurf it.
For the 3D'ers, it will actally hover thanks to the negative expo. (3:00)
Additional flights allowed me to stall turn ruff.

Want to again thank JGplane for his design

Anybody have a design for udder rudder to blend in better?

#6
L Edge said:
Here is the start of the conversion to EDF.

First problem was the dia of the EDF was higher causing the horizontal stab to be inclined steeper.
Click to expand...
Yeah I had that too.

Here is the 2 dimensional nozzle for thrust vectoring. Will be used for rudder and added movement for elevator 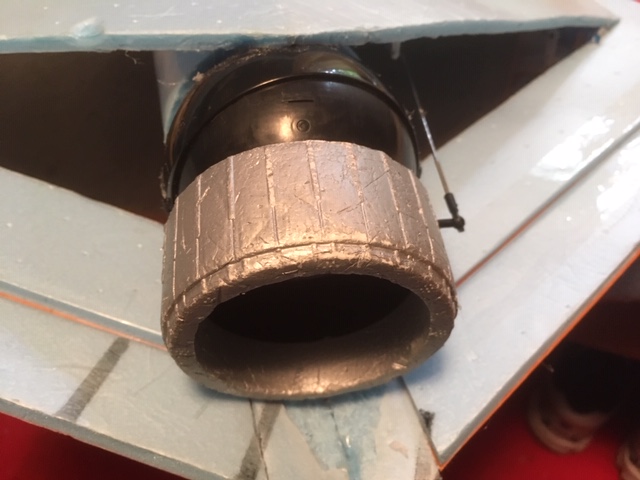 Servo arm is used for rudder movement. Elevator is shown on top with next pic. 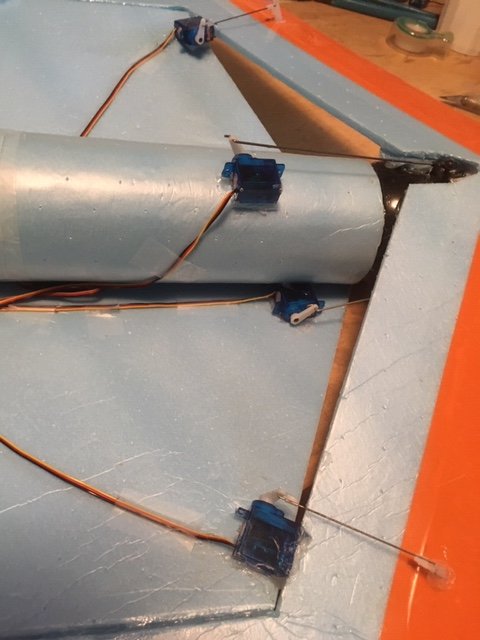 Did the same as prop unit and used servo to add stability(glued) for the tapered horizontal stab. Had to hack out the top of stab to get movement of nozzle as shown above. Again used short distance to control arm to prevent wire from bending when tight manuvers are pulled.

Here is 4 servos, 2 operate elevons and the other rudder(top on tube) and used elevator (side) in 2 conditions. Used mode 1 for TV nozzle off and mode 2 for additional elevator movement of TV. Plane is capable of loop as small as 3 dia of plane!!! Will flat spin with a touch of rudder and up elevator with TV on. Rudder worked at all times on TV.


Here is where it did not go the way I planed. Put on all electronics, battery, etc. and then went ahead and cut length of tube. Poor performance and CG off. Problem was that I increased the height of inclined horizontal stab to get exhaust tube in and it screwed things up. So added segment(real easy, just cut and glue and cover with tape for new value.138388 Checked for leaks and now ready to balance for CG, but did a longitudal which is important.138390Quarter(penny) for your thoughts of what I need to have it balance out. The reason you do this if not balanced out in tight turns, nose will either climb or drop. Did this to our pylon racers which sometimes took 3-5 flights to get it correct so you just pull elevator in turns at 185+.

Happy with the conversion to a 64. Been fine tuning in further flights. Left some nose down on nozzle to keep it really in trim.
Total weight was 479 grams . 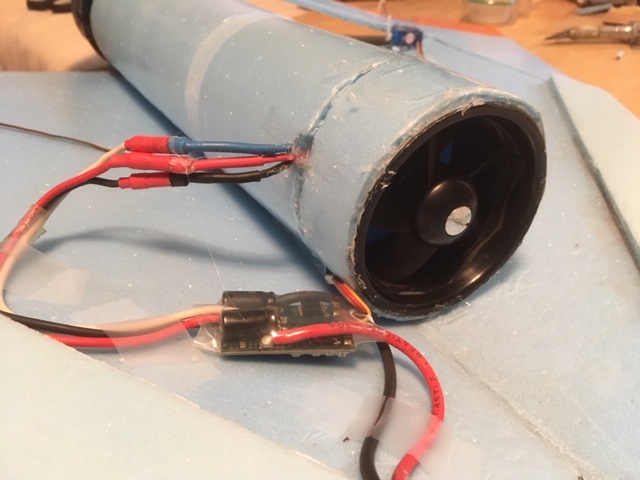 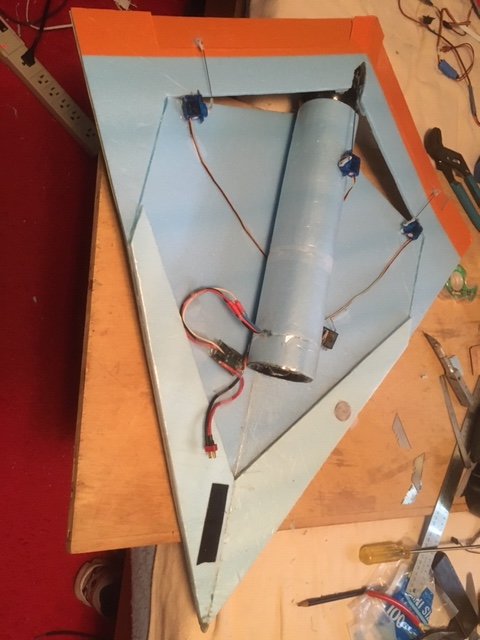 #8
Anybody know why blue showed up in text? Fouled up order of pics and text!! Don't know how to fix.

#9
The Blue part is all a link to your Ruff Diamond video,