Then there are the kit builds

Mentor
#43
Ok, so...My list is pretty small, compared to everyone else's. I've GOT most of what I want already!!!

Seaplane/Sea Duck
3D flyer of some sort (Maybe the new FT 540?)
Helicopter (not sure which one - don't know anything about them other than there are a bunch out there LOL)
Armattan Chameleon or QAV Skitzo frame quad
Full size Timber
Rebuilt Bushwacker w/lights for night flight
EDF A-10 Thunderbolt (maybe I'll pick up the UMX version?)
Balsa slow flyer
Paramotor (If you don't know what this is, it's a paraglider with a pusher prop motor strapped to the back)
3D Printed P-38 Lightning

#44
I will pitch in because how awesome my club and the people I know is. Just so you all know I have been in the hobby about a year.

Dream list (what I still need to complete):
A balsa scratch build edf jet of some sort.
A PA plane of some sort. (Good 3d plane)
A DLG glider
A super fast FPV quad.
I think that is it. However I will think of more later.

What I have:
FT guinea pig (working on flat spins and working on bomb drop)
FT Duster (I don't know if it flies bad or If i just can't fly it)
A gental lady glider (need to finish puttting the motor on the front. Doing a electric conversion)
Sport cub s (Number 1 go to plane that I have not had a problem with it)
Sport cub s2 (can't handle much to any wind. And I live in a more windy place)
WM park flyers yak55 ( learning to fly 3d with it)
2. Fun cubs (one needs a receiver and it is ready to go)
A UMX vapor (need to replace the main CF fuselage)
Fox glider (A harder glider to fly and have not flew it much)
Dlg gambler (needs to be finished building. Its half done)

I have 5 kits I have to build yet. I don't have eltronices for them and the electronics are the more expensive thing.

I have a bunch of rubber band models airplane. They are fun to go and fly. If you guys want to see that list ask. I would be happy to post it.

A lot of my club member and people have given me lots of planes and has been a great help. Can't have enough planes.

What i have:
Syncro (in need of repair)
F-27 Stryker with FPV rig (in need of a new VTX)
NIB RMRC Gremlin
RMRC Anaconda
Some V-tail hotliner (in need of a collet/prop)
Seawind

Some explanation:
Polaris: There's nothing quite like a plane you can fly anywhere. The polaris I had was flown by a modeler in Detroit until i bought it off him. Its flown on a dozen or so lakes, grass, the local RC club, etc. Its all the benefits of both an EDF jet and a seaplane but with none of the drawbacks, so great maneuverabilty, all-terrain usage, awesome speed and a glideslope, without the EDF battery life, noise, and lack of static thrust
F-4 phantom: I had Hobby Lobby F-4. Thing was a blast to fly! It flew like a brick, but it was fast, and great for those low passes where you could hear the noise of the EDF echo off the trees.
Radian: Got loaned one of these by Tim Morel at FFE this year. Its nice to have a plane you can look away from for a moment, thats predictable and slow.
FPV Seaplane: Seems like a neat idea, have something that has a nice, long range, take off and patrol the lake.
Straight wing EDF: I like the blend of performance, maneuverablilty and glideslope that planes like the JPower AMX provide.
Large Scale stuff: I've been trying to build larger scale RC aircraft for the past 10 years, with varying degrees of non-success. The B-36 was my latest attempt, but after some wing structure issues, it's back to the drawing board

Oh, don't buy the Flyzone Seawind. I'm really not sure who thought it was a good idea to create a hatch into the battery bay that opened from the back, and then used only magnets to hold it down, but that aircraft has been grounded for a while due to electronics failures caused by heavy water ingestion when the nose hits a wave.

#46
Mine are mostly custom builds. I have a big family, so my hanger space is VERY limited anyway. I'll stick with 10 in no particular order...

Have
1. Hopeless diamond (my own 1 sheet DTFB creation)
2. Don Karnage's plane (currently building this, and not sure how it's going to turn out)
3. X-29 (have speedbuild kit)
4. 5" quad (I have one in pieces I've never built - still learning the quad thing)

And a nicely detailed Spitfire Mk XIV to replace the first one of these I crash...

Site Moderator
#47
@b-29er, thanks for posting some comments and ranking. It's nice to gain some insight of other pilots and their aircraft.

Wow Luis that is some list. I think you need to post a video somewhere. Have you already? Are all those yours or are some Carter's?

Does anyone else have a plane that disappointed them?

Mentor
#48
JimCR120 said:
Does anyone else have a plane that disappointed them?
Click to expand...
Oh yeah.... a few

an RC Groups design called the "Puddle Shark" - never did more than a figure 9 maneuver... after the 4th one it was toast. Too short coupled and small control surfaces I think.

I had a rotten experience with the FT Mini Scout - I know lots of others have had good ones so it must have been my build technique. Never could sustain controlled flight for more than 10-20 seconds.

The Flyzone Seawind I had was a cursed plane too. Loved to dip a wing and cartwheel when landing on grass. Then the motor mount broke free just after takeoff causing a quick return to the runway and a bunch of prop damage to the fuselage and pylon. After repairing that and having one good flight (the only good flight I ever had wit hit) I moved to the water where I had two flights in a row where it took off and performed fine, but went deadstick within moments of touchdown and needed a boat retrieval. Something about the Specktrum AR6100 in that model just didn't like being close to the surface of the water.

Mentor
#49
JimCR120 said:
@b-29er, thanks for posting some comments and ranking. It's nice to gain some insight of other pilots and their aircraft.

Wow Luis that is some list. I think you need to post a video somewhere. Have you already? Are all those yours or are some Carter's?

Does anyone else have a plane that disappointed them?
Click to expand...
That's the wish list Jim, I wish I had all those birds !

#50
Just updated my list back on page 1 after quite a while. Starting to run out of hangar space now.

JimCR120 said:
Does anyone else have a plane that disappointed them?
Click to expand...
I've had a few:
LX Models twin 70mm F-4 Phantom - Upgraded with my own power system, custom paint scheme and detailing. Never felt in trim, was still underpowered, and always pitched unexpectedly on landing. Crashed twice, and finally an aileron departed on takeoff causing a complete loss.
LX Models 70mm F-35 - Flew terrible. After about 45 degrees bank angle at any speed, the upper wing seemed to stall, forcing it back level. It also hunted horribly in pitch and roll. Oddly enough it was easy to land, but terrible to fly.
Dynam Focus 400 - marketed as an aerobatic aircraft but was underpowered, had tiny ailerons, and very poor landing gear. Gear completely folded during normal taxiing on a paved surface.
Techone Fun Fly Trainer - Not a trainer at all. Wings and tail flexed so much it was near uncontrollable.

JG
Click to expand...
Wouldn't mind one of these either, but from what I've heard from the pilots who actually flew the full size monsters, they're a beast to control. I wonder if an RC version would be as hard to manage?

Then there are the kit builds

And I could just keep going and going and going! I could have worse problems
Click to expand...
I am thinking about getting the Eflite AT-6, do you like it?

Mentor
#54
IcedStorm777 said:
I am thinking about getting the Eflite AT-6, do you like it?
Click to expand...
My dirty dozen are all aircraft I would like to purchase, currently do not have any of them. Closest I got so far is the FT Goblin instead of the Strix Nano Goblin. I love the FT version!

#55
i dont have a list to share, but i will say, The FT Viggen is possibly my favorite RC jet of all time, its so much fun.

#56
Wasn’t sure where to post this, so I figured I’d revive this old thread to share an update to my original post on my collection. Over the past couple of years, I’m happy to say that I crossed a few models off of that dream list and added them to the fleet. Also, finally moved out of the apartment and into a house. Built a few new storage racks as well. Can’t wait to get back to work on some of these projects! 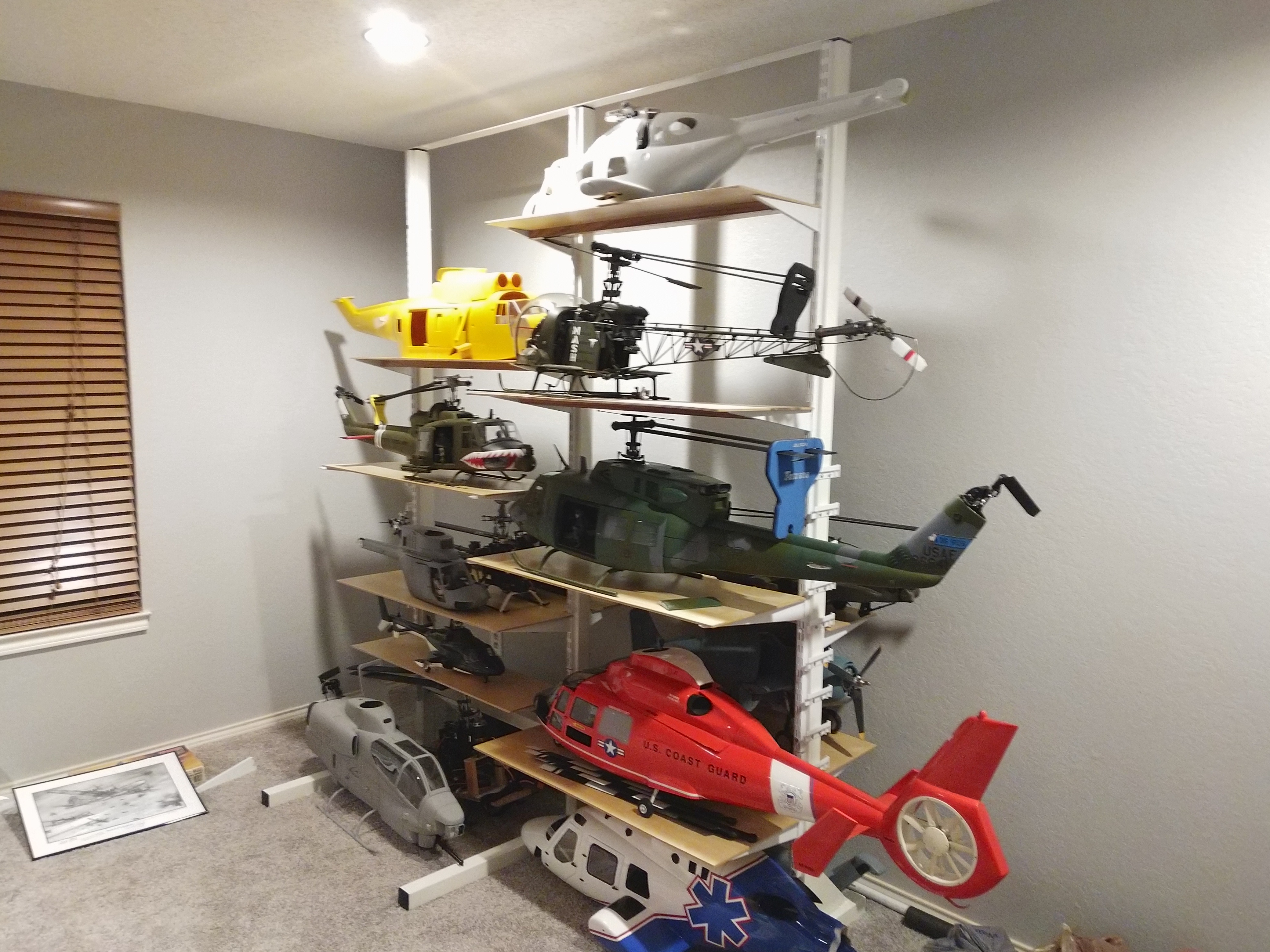 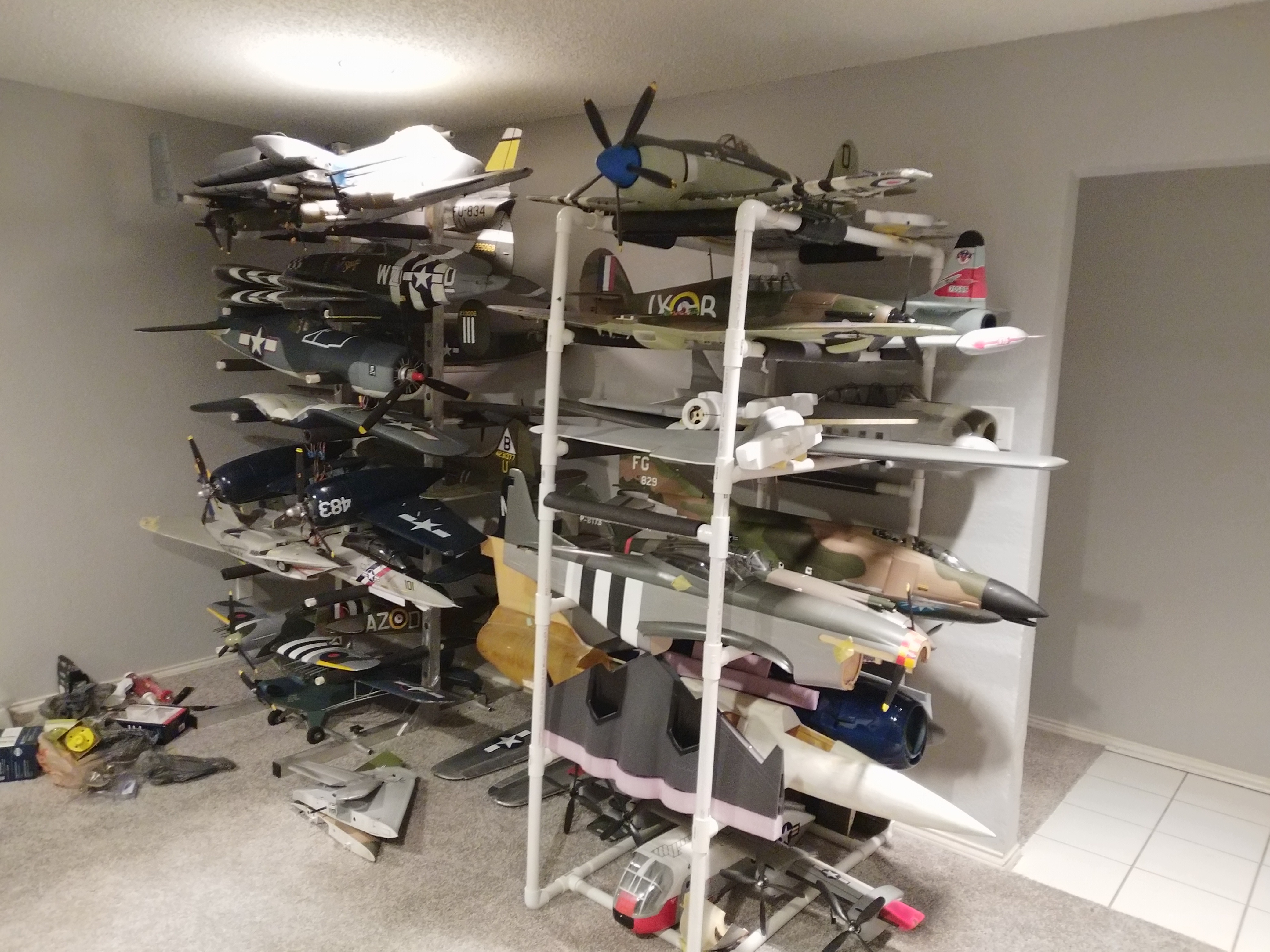 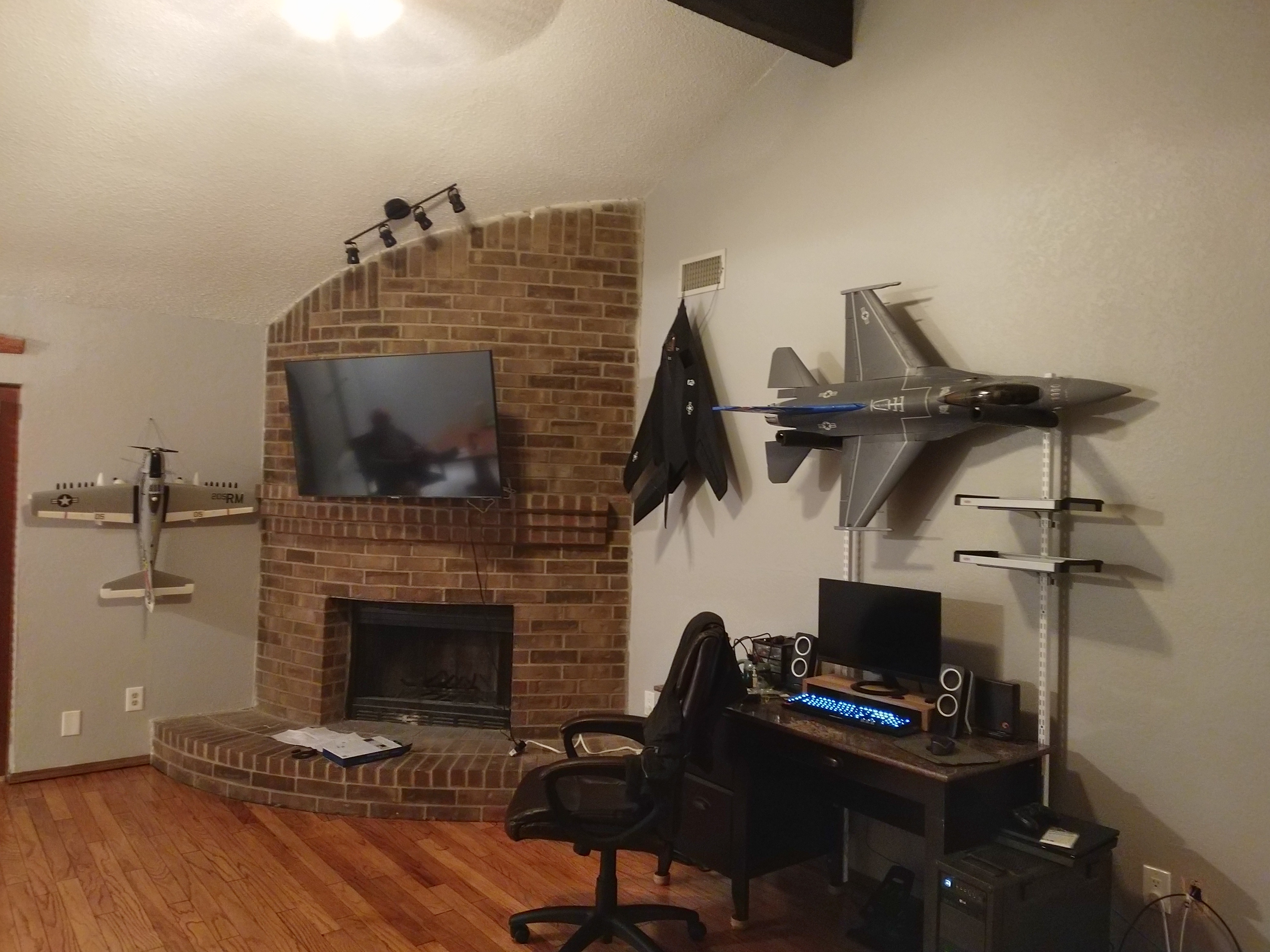 #57
Interesting... I just did this for myself trying to figure out what I wanted to build/etc.

My Oldest Son (Currently, his tastes seem to be more varied):
Me (I more have 'functions' that I want to fill over specific craft):
I want to combine the FPV and tilt rotor vtol, but that is pending me verifying I can ge the tilt-roter thing working to start with. Then I can see about mass optimization. I also may or may-not be worried about that ribbon combat plane as were I fly, no one else seems that interested. At least until Remote ID gets finalized, my goal is to have everything that I have either sub-250g or be made of parts that are relevant for sub-250g.

So, if I get my Tilt-Rotor Vtol working sub250g... I would probably be down to 2/3 craft: that, a TT for my younger kids and a ribbon combat plane.

Ok thats all fine n dandy.. not messy enough BACK to tha dungeon n get some work done!!!!

Site Moderator
#59
I didn’t think the Forum sent me any notifications anymore. But here it did and look at who’s here.
My hangar has recently thinned our quite a bit getting ready for this long anticipated move that looks like it’s finally happening. I did hang on to my 2.2 RocHobby VTail glider, my Zephyr, and a heli a purple bearded friend gave me.

#60
My 2 All Star planes are:
Extreme flight 105.5" Slick 580 👍👍👍
An absolute favorite but won't hesitate do something phunky that I don't tell it to every once in awhile.
Skywing 91" ARS 300 👍👍👍👍
Does things that I never thought could be possible. Performs amazingly, and can be taken apart within a couple minutes due to it being held together by magnetic pins
You must log in or register to reply here.
Share: Facebook Twitter Google+ Reddit Pinterest Tumblr WhatsApp Email Link
Menu
Log in
Register