I've been working on a project over lockdown and thought I would share it with you all, hopefully it will be of interest to a few!

I've been tinkering with Arudino boards now for a few years and one project I wanted to try was the balancing robot. This looked cool but I thought 'hmmm how can I make this more interesting..?' So I was wondering if it could balance in 2 axes rather than just the 1, and I love things that fly so making a flying balancing robot seemed like the next obvious step.

I figured I'd need 2 motors, ideally contra-rotating that can be gimballed, a bit like a rocket, and that should be enough to give me full control. I designed the whole thing around a pair of motors I found online, contra-rotating motors aren't too popular these days but I found just the right one which allowed me to size the rest of the vehicle around it.


The frame is just 5mm (3/16") balsa square 900mm long. I thought I had made a mistake using this when I felt the balsa as it was like spaghetti! But once the truss structure was complete it was very rigid. 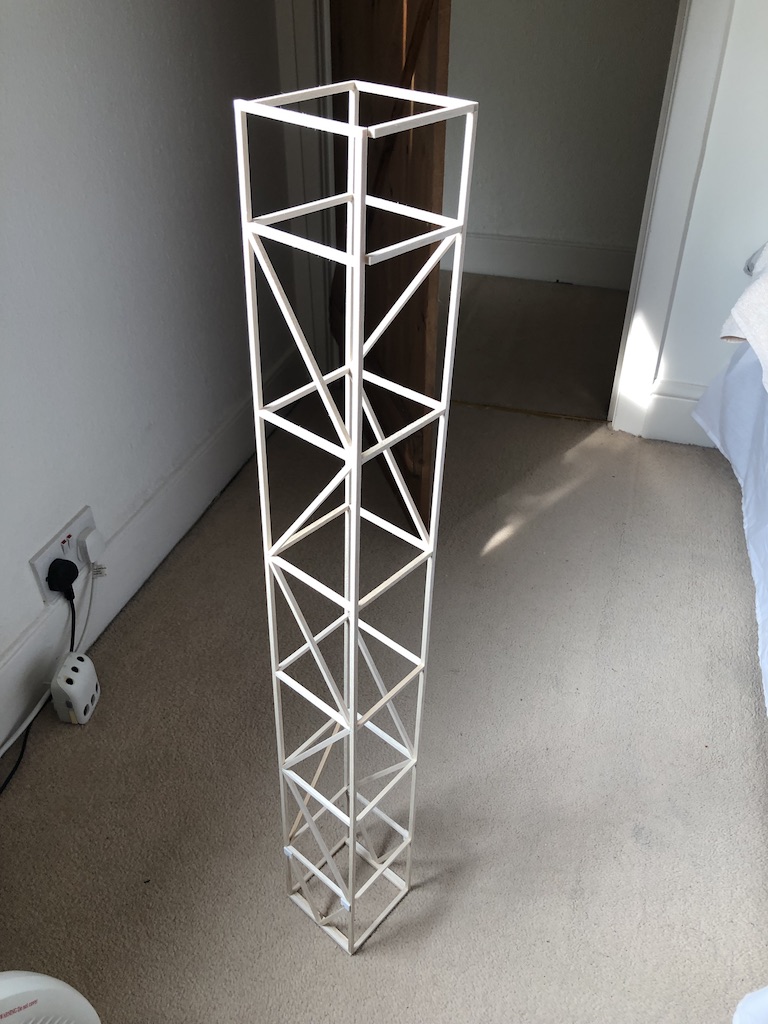 I never actually weighed the frame (annoyingly) but from weighing some end cuts I had lying around and measuring how much of the stuff I used I think the frame came in around 60g. It is very stiff, but in a crash it doesn't fair too well.

This is the contra-rotating motor that I got from that well known online auction site. It was about £50 and has been great so far. It has two 9x5 props and makes a hell of a racket when it gets going. The gimbal was designed in CAD and sent off to get 3D printed as I don't have one myself. 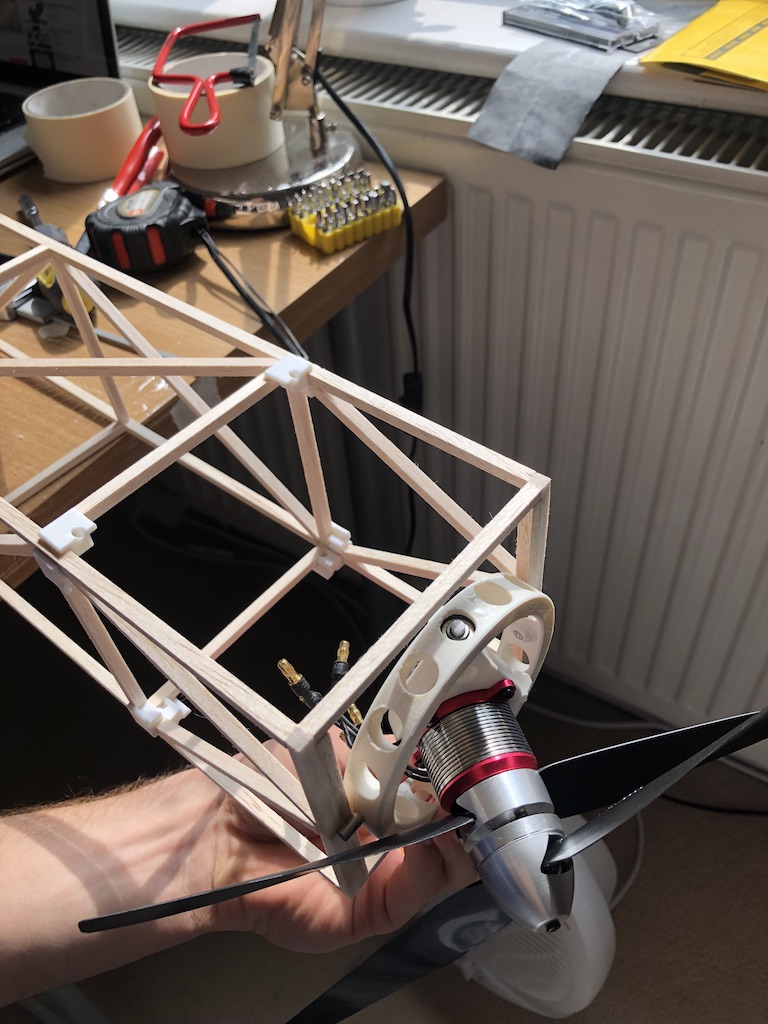 This photo above shows the 9g metal gear servos that actuate the thrust vectoring using 4mm carbon tubes as push rods. The landing gear is made from 3mm carbon tube. One issue I had early on is that the landing legs and frame are so stiff, the slightest hard landing would shatter the balsa frame. I got around this by (being a bit more careful! and) adding a spring to each of the central tubes on each side to absorb some of the landing shock. It works much better now but it could do with being stronger. It is very light weight which is good though. 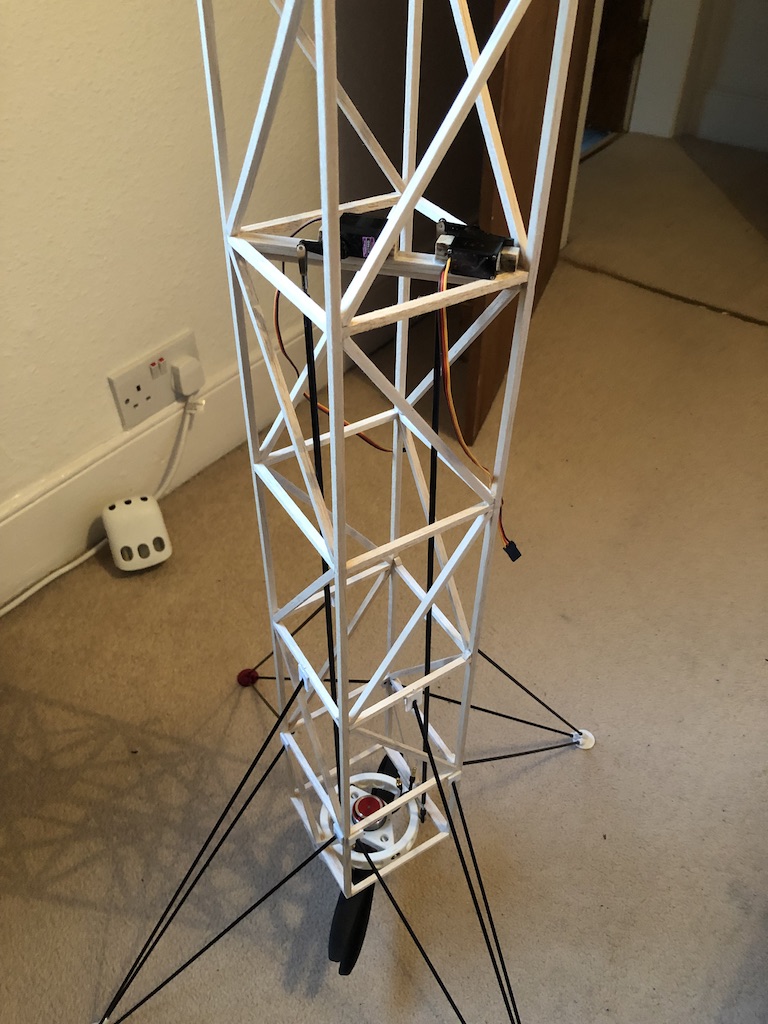 This is the flight controller which took the longest to complete by FAR. I coded the whole thing myself. I'll try not to go into too much detail here but if people would like more information on it I'll be happy to talk about it and share the code.
Processor is a STM32 (72MHz) programmed using Arduino IDE.
5v & 3.3v voltage regulators.
BMP280 barometer
MPU6050 IMU
8ch RC Rx. (PPM output) 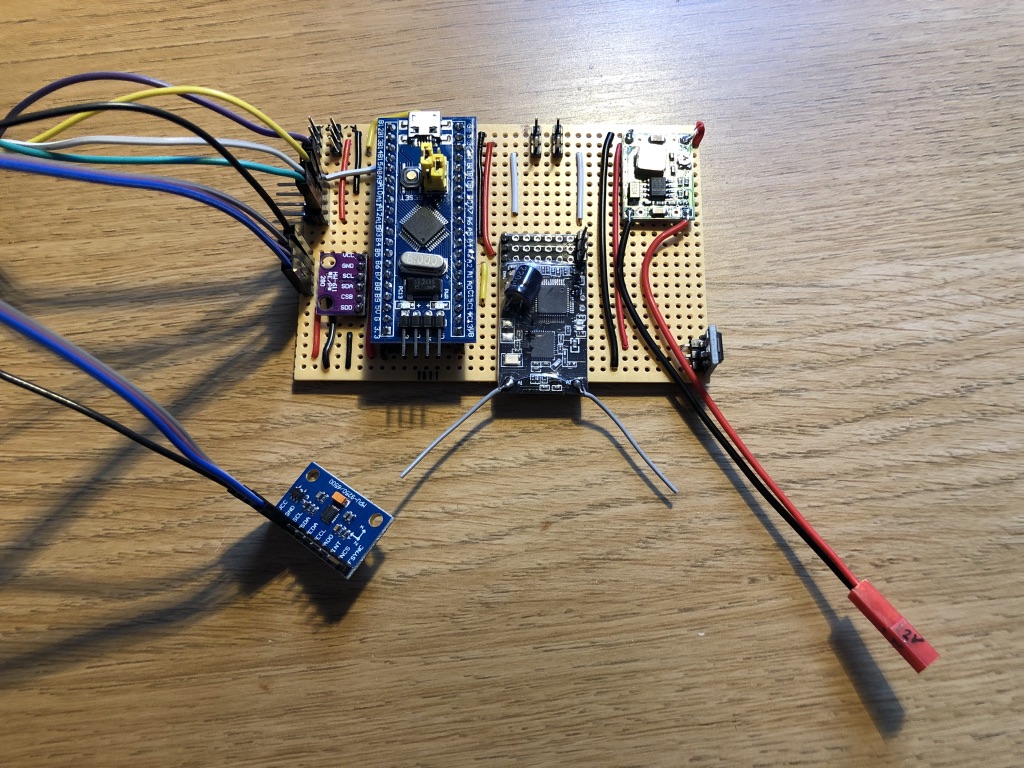 At the moment it flies using a DX8, I'm in the process of integrating GPS into it so it can fly autonomously but for now it is radio controlled and stabilised.
The stick inputs for translation dictate the pitch & roll setpoints. So right stick neutral means the vehicle should be at 0degs & 0degs. If you move the stick hard over to the right, you are commanding 0degs pitch and 4degs rolls. The vehicle will rolls to 4 degress and stay there, this will then mean it will start to fly in that direction. Throttle is just simply throttle, and the yaw works but speeding 1 motor up and slowing 1 motor down.

In a nutshell the controller gets data from the IMU at 500Hz, it performs some calculations then computes the Pitch & Roll angles. (Upright is 0 degrees & 0 degrees). In another loop at 50Hz the controller looks at the difference between the actual vehicle angle and the desired angle. In control theory this is known as the 'error'. Based on the past, present & future error (PID control) the controller will actuate the thrust vectoring to achieve the desired body angle. The controller only updates the servos and ESCs at 50Hz as that is their maximum update rate so no point in going faster.

Yes I appreciate I could have bought a flight controller that would be good to go out of the box, but where's the fun in that!

#3
This is more Elon Musk ish. I remember this one way back years ago. STILL amaze me how these fly like that. Well done.

#4
Many thanks, I did see this guys videos a few years ago. He's made some pretty cool dualcopters and was certainly an inspiration!
U

#5
Can plz share me code and diagram sir.
ugyendechen00@gmail.com
C

#6
i already left you a comment on youtube, this really is an amazing project! I think i will steal your landing gear, maybe with some thicker tubes as the motor i have laying around is a 6374 with a 20x14 prop. Or maybe it is better that i built a smaller model like yours to learn how this stuff works without too much damage. Your setup looks nice so i think i will simply copy it as far as possible.

Nice that you did the PID etc by yourself but i think i'll simpy buy a PX4 if this is any good, as i am completely new to this. At work i built 6-axis robots for cutting that also use PID control for position and speed control but that is something different it think. I want to cut the airframe out of 60x60x2mm AW6060 square tubing so it looks mostly like your airframe as I already mentioned on youtube. I want to cut it using one the many 6kW or 10kW fibre lasers i am working with. Most things i cut go into the bin, that is always a bit sad for me, the cuts where good but had no other purpose than testing and making pictures for the customers I am waiting keen to see some more flights of this beauty!

very nice built! especially that it is made coaxial, i would like to built something similar but would like to have 4 vanes/fins behind the rotor that steer the airstream and balance out the angular momentum of the rotor. I like your square airframe, i would like to try a skelletonized 60x60x2mm AW6060 square pipe as airframe, i think it is ideal to have the battery on the top for better controllability. Do you have plans for a 2nd chemical stage with payload (camera)? What do you think about letting the battery on the ground and have a wire that supplys maybe 600V to the ESCs to save soeme weight? Greetings from Darmstadt near ESOC
Click to expand...
Edit: Of course it will need a hollow shaft motor to built this, still tinkering around how to get that hollow shaft into the Turnigy 6374 SK3. Building a smaller version will be difficult though, maybe a caged approach isn't most efficient but much safer to work with. At least it does not need a hollow shaft motor, the fins can be mounted to the cage. I found this design that looks worth to copy from

The landing gear is in definite need of something a bit more robust, The 3mm tubes work great for the 2 lower members of each leg but the top leg could do with probably at least 4mm and some better suspension. At the beginning the legs would shatter the balsa wood on any hard impact as there was nowhere for the energy to go. I think I'd like to use a 4mm central member with a 2mm tube that inserts into it with a long coil spring a bit like a car shock absorber.

Frame wise, this one is super light weight at about 60g, but very brittle. Any crash and its back to the workshop for lots of repairs and gluing. I'd like to use a carbon truss frame, a bit like the ones used for the human powered helicopters. They used off the shelf tube for the main members then cross-braced it with carbon tow. Very light and very strong.

Do you have plans for a 2nd chemical stage with payload (camera)? What do you think about letting the battery on the ground and have a wire that supplys maybe 600V to the ESCs to save soeme weight?
Click to expand...
Haha I have thought about wrapping it in white paper to make it look like a rocket, and a second stage would be cool but weight is an issue. Current flying weight is about 720g, and the motors can produce about 1400g of thrust. 2:1 thrust ratio gives good control otherwise you risk slamming it into the ground. I haven't really thought about a tether, if you removed the battery it wouldn't fly as well as the CG needs to be as high as possible for the best stability. Many thanks!

New video up about it, enjoy!

#8
thanks for your answer and ideas!
okay if we do SpaceX for the real then it should be
a) mass producible
b) cheap to build
c) simple
d) easy to handle (like throw it into your trunk and just drive without caring too much)
e) a decent mass to thrust ratio would be favorable (i think of 6 or 8:1, that should be doable with that concept)
f) a second stage with payload is an obligation, otherwise the whole 1st stage has no sense, waterbombs as a payload should not too much damage if something goes wrong in the first approaches
g) make it bigger as soon as you are able to and if it makes sense, to gain a good speed/impulse when the 2nd stage decouples. .3mach would be a good start

thats why i think about vanes and sick motors+propellers that may only survive a few rises to 2-3km. What do you think about the 6374 motor and 20x14 prop in terms of archiving that goal? I dont like carbon airframes as al l i have seen yet where quite brittle. AW6060 is a material that i have good and much experience with. It eats a lot of energy if it must and is light and stable, you get it in your next best hardware store as square beam 60x60mmx2 or online. The airframe is nothing that can do much aboutthe mass/thrust ratio though, it is simply too lightweight to do much in a 1st stage, in a 2nd that looks different for sure (round and liquid propellant..?)

Even with 100m/s max the flight to 3km takes about a few minutes, so a 40C+ battery makes sense, i think about 45/90C nanotech for the first try, they would not do any harm. for static tests that come first anyway
Last edited: Aug 23, 2020