#1
Bunch of you aren't old enough but in '76 the 'MURICANS had a 200 th anniversary. For the Brits, kinda like just last week.... some comedian nick named it The Bison toenail instad of bicentennial. A place that sold hobby stuff called hobby shack decided to build a cheap entry plane and partner it with a cheap 3 channel radio called the Cirrus. (Basically a repackaged futaba system in a plastic case). The glider is The Spirit of 76. (Still available on e bay) the Futaba 6 next to it was state of the art with lots of nifty features: Nicads in the transmitter (OMG, heresy) instead of 12 aa batteries. Changeable crystals, a full watt and a half transmitter output, closed gimbals maybe 10 different servo styles from mini to monster and included a "brick".

Changeable crystals because when you went to the local flying field in the LA Area, there were usually 5 people on your chosen frequency, brown/ white, red/white, yellow/white. There were 15 FCC allocated radio control channels, 10 of which were aircraft only. So, for $9.95 a pair, you could have any channel you wanted. I had 5 channels, or 8 sets total. Tiny little problem: at 1 1/2 watts with a transmitter tuned for lower part of the band, they were noisy as heck on the 75 mhz channels, bleeding over onto the public service bands. Iirc, there was a recall to reduce power to 1/2 watt and fix the bleed over issues with soldered crystals. Mine is still stock. Finally, this the first series that had a plug for a buddy box so anybody using a Futaba that had the plug could, theoretically, fly with a teacher. I say theoretically, because it was difficult in practice. Both transmitters had to be on that same channel, no more than 6ft apart, and the trainer had to have the disarm button on their transmitter. I still use this system in the FT Bronco I am building..

The glider pictured isn't the actual sold in '76, it is the second run in 1980. The kit had build issues and wasn't really good at anything but crashing. They were noted for wing folding on high start, however heavy and low performance, particularly after a couple of crashes. But they were cheap @ 19.95 each and it is an example of what earliest foamie trainers were. Note the Pilot, Jack, before they blew him up.

Fixes were: bunch more diehederal, stop to stop rudder throw with some added area so it would eventually turn, nylon tape in the center section and gluing in the horizontal stab so it wouldn't wobble.

I was going to make mine powered with the Cox .09 medallion, but Cox was bankrupt at that time and I couldn't get a glow plug.

I still fly it slope, typically waiting for the wind to pick up enough to fly my ZAGI 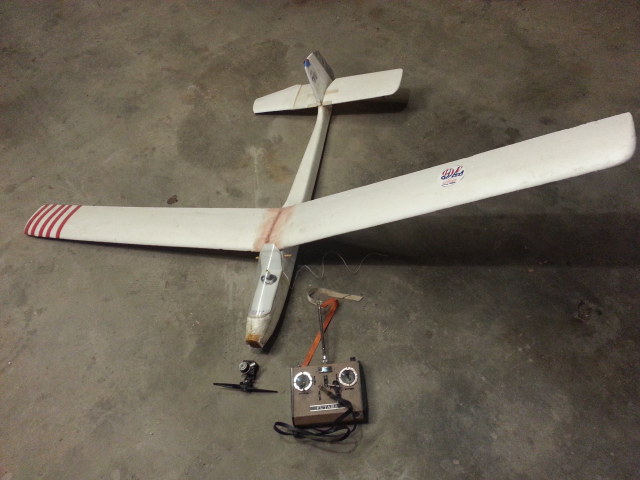 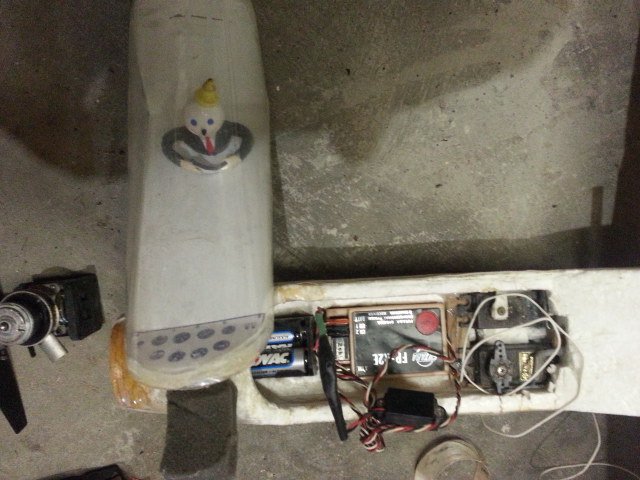