Building a Duster, and my 70%ish NubeTube

#1
Just finished a small Nube Tube (21" length, 23" wingspan). After losing my last Tube I've been reluctant to go fly but this thing is ready to go so I can't wait much longer.

I found tan packing tape for 1$ at Wal-Mart so I used that. I'm using the Suppo 2208/14 motor from my Fogey mounted on hobby ply glued/taped directly to the end of the tube using giftcards for thrust offset. I'll use some 8x4e props.

Wanting to get away with using only 2 servos, I used 1 to control both ailerons. This setup requires me to snake the rubber bands for the wing underneath the control rods when attaching the wing, not super convenient but it's functional. Considered just hot gluing the wing on and skipping the rubber bands (like in one of the ExAir Videos) but ultimately decided against that.

You can see that the fuselage tube didn't turn out completely square. Also the relationship between the wing and tail isn't exactly straight, however, I'm hoping it's close enough. I placed all the electronics on the outside of the fuse both for cooling and I've found my previous Tubes weaken around the hatch area. I'm not crazy about the battery hanging below the fuse with no landing gear, but I'll be in tall grass and I'll fashion a foam plate to provide some protection for it. This is my third NubeTube build, but my first small one and I absolutely love the design. It's been a wonderful trainer and I can't thank ExAir enough for the design. I hope to be able to post some video when i maiden.

AND NOW FOR THE DUSTER...

Decided I would sharpie the wing before covering it in packing tape to help me with orientation in the air and to give the plane some color.

I installed my servos inside the wing as Josh suggested and it worked wonderfully, made sure to center them before hand and hopefully tightened the arms well enough.

The dihedral was very easy to put into the wing and it was one of the parts i was most worried about. I wish I had done black and purple stripes over the whole top of the wing but undoubtedly I'll be building a new one soon enough.

To me it seems that my wing will not fit through the hole in the fuselage, is this by design? I followed the plans exactly, or as best as you can follow the Flite Test tiled plans. I don't know if I should proceed with trying to fit my wing and it will just be a really tight fit, I feel like that would almost certainly rip the fuselage. Perhaps I should try to remove a little more material, would love some input from someone who's built this one. Ive got "big wings" on a FT Spit i was working on too, was part of what ended that build...

Anyone else noticed the wing holes on the plans being absurdly small in their Duster/Spit build?
Plan to finish the Duster within the next week or two (I build slow) and get it into the air.

#2
Had some time to work on the Duster tonight and decided to proceed with folding the fuselage and passing the wings through. Also cut out the tail pieces.

The checker-boarding looks great against the black fuse.

The dihedral turned out pretty even on both sides 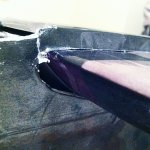 The wing nearly tore from the foam as I maneuvered it into place and you can see the resulting damage. I'm not certain if I should try to rebuild the fuse or just glue the wing up and go go fly it as is. It's definitely going to be a weak spot, and if i don't rebuild, any imperfect landings will be out of the question. Reinforcing the area with gift cards or popsicle sticks will likely work well enough, I'll figure it out tomorrow
You must log in or register to reply here.
Share: Facebook Twitter Google+ Reddit Pinterest Tumblr WhatsApp Email Link
Menu
Log in
Register