Check compatibility of my parts please

#1
I am building a DIY rc plane out of a foam glider and I want to know if all of these parts will fit together and if my battery is small enough. I want to have a longer flight time but obviously want the plane to fly as well. Let me know what you guys think! 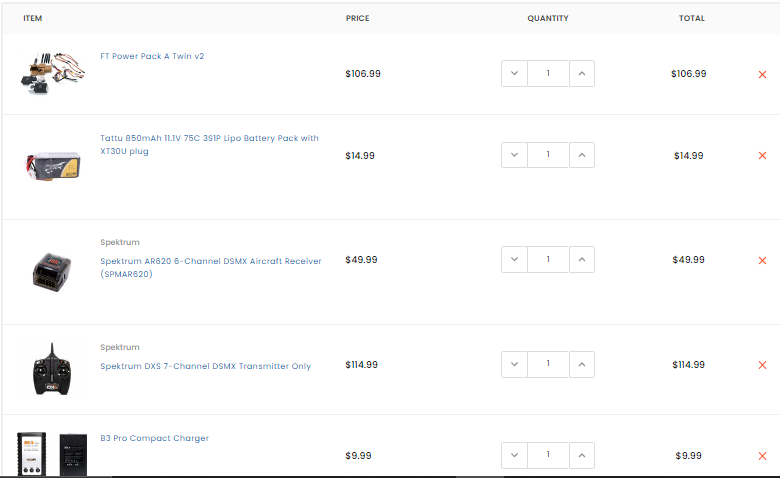 #2
Basically yes but it would help to know the wingspan of the glider and why you need two motors.
B

#3
The length of the wingspan I believe is 39" and the 2 motors is just the design choice for me. I might go for wing mounted twin motors just for speed and to try it out but other than that I can just do a nose mounted single engine and just have an extra. I don't mind paying a little more for that option.

#4
so you want to build a plane that glides or a glider. to me a glider use a single engine to climb back up into the sky only no motor assistance after that, an extra motor will just drag you down faster.
B

#5
skymaster said:
so you want to build a plane that glides or a glider. to me a glider use a single engine to climb back up into the sky only no motor assistance after that, an extra motor will just drag you down faster.
Click to expand...
The foam glider I'm going to just use as the airframe. I'm just turning a foam glider from Walmart into an rc plane. I'm also just starting out so I don't care too much about efficiency or optimization rn just that the parts are compatible and I will have control of the airplane during flight

#6
"I want to have a longer flight time" and "i don't care too much about efficiency" are direct contradictions. The parts you mentioned are compatible. However, a twin engine setup is going to be more difficult to wire and set up than a single engine, and overall be less efficient.

However, if you're just starting out, you may just take the money you'd spend on those parts, get a single A pack, and pick up a Mighty Mini Trainer v2. You'll spend a lot less time building something designed to be an RC than you will converting a glider to be RC, be able to follow step-by-step build guides instead of winging it, and be able to take skills into your next project that will help you convert a walmart glider to RC. From someone who did this a decade ago, converting a walmart glider is viable if you know what you're doing, i'd never recommend a DIY conversion as your first RC when you are also the designer. Too many variables.
You must log in or register to reply here.
Share: Facebook Twitter Google+ Reddit Pinterest Tumblr WhatsApp Email Link
Menu
Log in
Register