Staff member
Moderator
Mentor
#182
Rasterize said:
11X17 skin set for this:
View attachment 94392
Cane be found here.
Click to expand...
Great work on the skin Rasterize! I think I need to update the Scout plans. I have a feeling a lot more people are going to be building this one.

#183
those look good man! i gotta make some guns for mine!

Staff member
Moderator
Mentor
#184
The FT Mighty Mini Scout plans have been digitally remastered by yours truly. You can get the updated version 1.1 plans here:

I will check with the admins to get the links in this build thread updated as well. 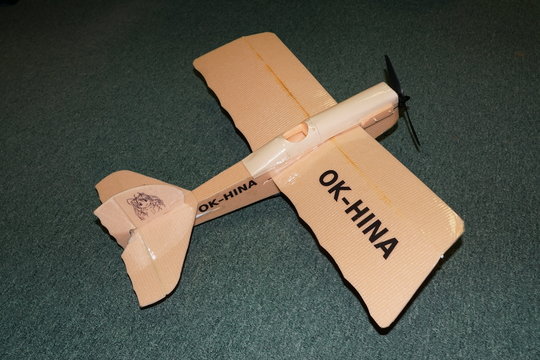 My Mini Scout is built from 3mm XPS boards from a local hobby store (pinkish-orange), covered with 80 micron laminating film. I used a styrofoam glue UHU-Por instead of hot glue. I built it with removable wing and detachable landing gear, wheels are 3D printed from PET-G, as well as the motor firewall. I use 10A ESC, 800 mAh 2S battery, 2205-sized 2300KV motor, 6x4E propeller. The weight with battery is about 160 grams.

I have a question, though: I had to point the motor axle much more downwards than the original build video suggests, otherwise it would porpoise up and then stall on throttle increase. Currently the axle points few degrees more downwards than the front third of the wing. I use the same right thrust angle as the power pod in FT plans (about 4°).

What downwards motor angle do you use, measured from the top flat side of the fuselage?

#186
I also made a Mini Scout this weekend. Build time was 3 hours, 9 minutes from hitting print on the tiled plans to having a finished airframe with no electronics coming in at 69 grams. I even ironed the leading edges of the stabilizers with the covering iron my Dad and I used when I was a kid to build models (and I'm 45 now). Would have done the wing edges too but I had already done the hot glue smear on them. 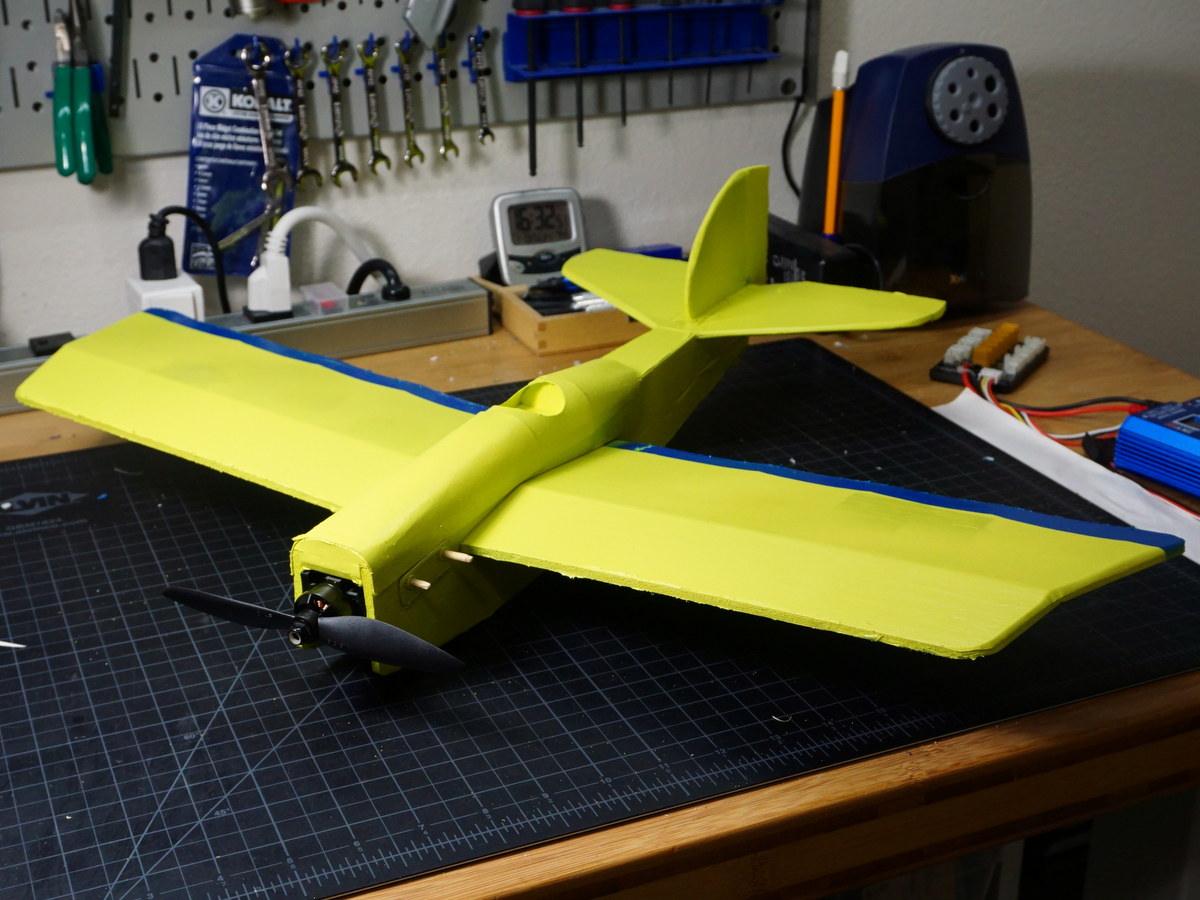 Took another 2 hours to get the electronics in. I had a difficult time because I used a 3D printed power pod which has fixed holes for the skewers to pass through and the chamfers on the corners meant that the thrust angle would be incorrect. It took a lot of head scratching and trial fitting to figure out where to poke them through. The thrust angle looks crazy-down but it still really likes to climb so I guess I didn't to too bad. I also need a little left rudder to make it go straight so it could use a little more left thrust angle (my prop spins clockwise). I'm also not sure how but my all-up weight is way high at 222g so I decided to not add the landing gear

It has plenty of power in this setup and could probably drop down to a 6x3 for a little longer flight time. I find it to be easier to fly than the Tiny Trainer with either wing just because it is so agile and I guess a little overpowered compared to my 320g+ TT setup. I flew for 15 minutes, 9 mins of throttle % time, and had about 25% battery left (3.69V).


I know it is way too late to respond to Yenya, but the down thrust angle is 4.6mm over about 55mm of the power pod so that's about 4.5-4.8 degrees. Much thanks to @SP0NZ for updating the plans too, the new style is so much easier to understand and reassemble from a tiled printout.
Last edited: Jan 14, 2019

#187
I did my first FPV flight! Strapped an Amazon-special $16 AIO camera on top and got to use the Eachine EV800D goggles I bought myself for New Year's. I even flew the Scout inverted, although when I flipped upside down I had a complete loss of signal for a split second which is more disorienting than I could have imagined. For some reason the video doesn't have the gap, which is when I looped to inverted.

I sort of blew it with the camera placement, mounted right in front of the cockpit. I should have mounted it further forward so at least the wings aren't visible. When flying straight and level it is pretty difficult to tell where I am. I'm sure I'll break it off in a crash at some point and get a second change at mounting it. I'd recommend if people think they'll be doing this to add another former under the turtle deck where the camera is going to go so there's something solid underneath to support it. It would also be a good idea to paint a black stripe across the top to cut down on the brightness of the plane affecting the camera exposure so much.

EDIT: Aaaaand on my fifth FPV flight I got a little too far away and started to lose the video feed. As I started my turn home I lost it completely and got disoriented when it came back. Reviewing the footage I circled twice and tried to return but was headed almost tangential to my position and the receiver went into failsafe and cut the throttle. Drove down the street until I had a telemetry signal on the transmitter and honed in on it by traipsing through the Florida swamp in 50F temperatures and using the FPV panel antenna combined with low power TX mode and finally range check TX mode. 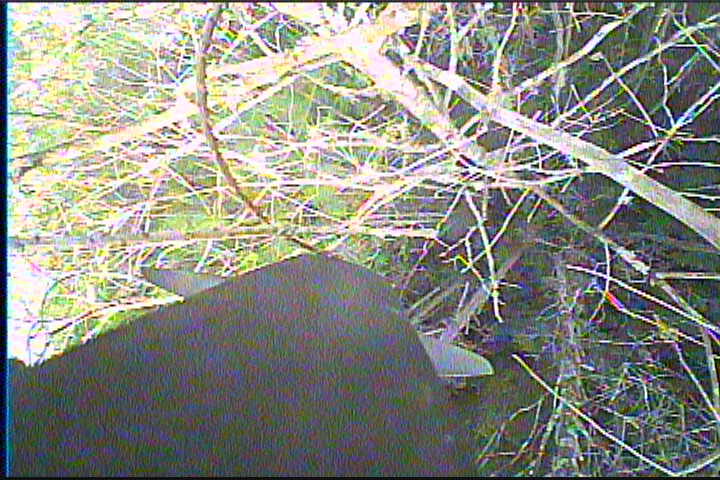 Fairly intact except for a broken wing about 10-15m up a tree. Luck was on my side though as the prop was free so a few throttle pulses got it rocking until it fell out. 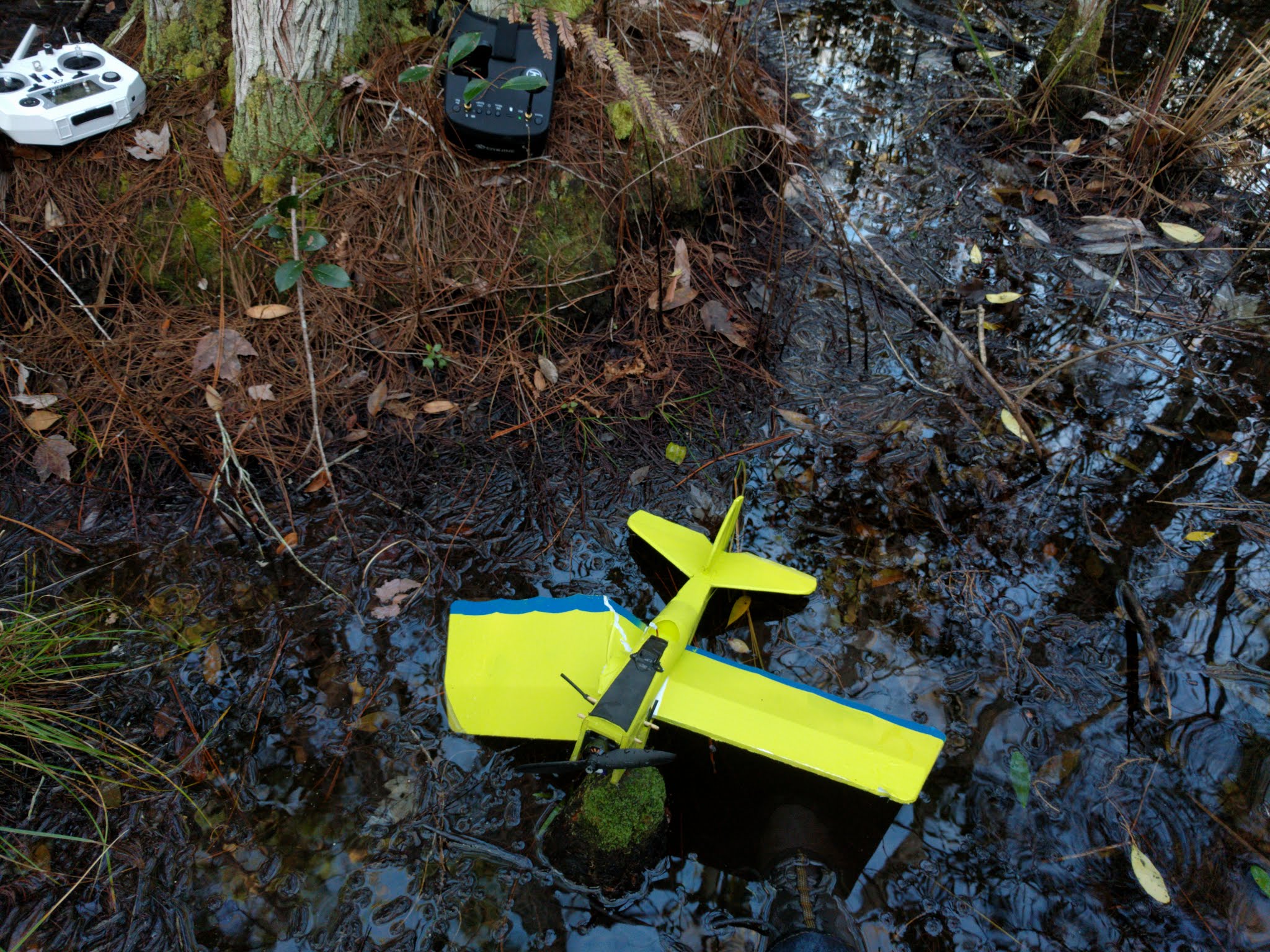 It also soaked up quite a bit of water after I got it out of the tree because it fell on the other side of some treebushes but I think all the electronics will still work. The airframe is in the oven on dehydrate and hopefully that will allow it to be reused. Still, quite a disheartening early morning flight.
Last edited: Jan 19, 2019

#188
Here's my upgraded scout. 110% size to perfectly fit 6mm XPS floor insulation. I also increased wing span by 20cm and added some surface to rudder. It's powered by 1806 motor and 2s 520mAh gens Ace lipo with 12A BLheli ESC. It flies, but it's really windy in central EU today therefore I can't say how well 😂 I made it for my brother as a trainer, I hope he'll like it

#189
I decided to cut out a Micro Mini Scout, 415mm wingspan (roughly 68%), to try for this years indoor season. I am going to use the electronics from an old UMX airplane. It will not be ready for tomorrow’s session, so 14 Dec is my goal.

I also have the "big FT Scout," I fly it with flaperons, which are okay (they are a great help to add lift with pontoons on!), but I don't love the feel of flaperons, and wanted a plane with true, separate flaps.

Maidened it today, with a total of 5 flights (no video unfortunately). It seemed to fly well. The flaps indeed help slow it down to a crawl, and it was no problem to fly it on the small field, but I haven't had a chance to tune the flaps to achieve full STOL capability.

6 min flight times were about right, flying with mix of mid-range throttle, WOT, and multiple touch and goes.

Time to give it some color....

#191
My little Mini Scout has been sitting on the dining room table for over a year now and hasn't gotten much action. I decided this morning I'd take it out for a couple last flights then break it down for parts and throw it out. Problem: this little plane is too cute and fun to fly and now I don't want to break it down for parts any more. It doesn't like much wind though, so maybe I'll have to take it out in bad conditions to remind me of why I don't get to fly it very often.
You must log in or register to reply here.
Share: Facebook Twitter Google+ Reddit Pinterest Tumblr WhatsApp Email Link
Menu
Log in
Register