This message is in regards to the development of a classified fighter aircraft which will be able to remain undetected by advanced Soviet RADAR systems. This contest is off the books and shall produce an aircraft with speeds in excess of [redacted] and a service ceiling in excess of [redacted]. As Lockheed Martin has produces such aircraft of similar characteristics (oxcart and have blue) you have been selected to begin development with no competition. Due to the increased threat from a design from the MIKOYAN AND GUREVICH DESIGN BUREAU (NATO name "Ferret") it is in the interest of national security that we arm our air force with an aircraft of greater performance and the ability to conduct retaliatory strikes. You will have the full backing of the United States government with funds coming from a black projects budget. You will also have the cooperation of the General Electric company's aerospace division. General Electric will be creating a new generation of jet turbine engine in concordance with your specifications under the guise of a high performance research platform which will be made public as a cover for the development of your aircraft. This program will operate under the code name "Aurora", with the aircraft's number designation being [redacted]. In order to maintain absolute secrecy you must retain all staff delegated to this project on site until completion with an expected completion time of 5 years. Test flights may be conducted at the [redacted] facility only between the hours of 1900-0300 in order to protect the secrecy of the project. The aircraft must have the ability to utilize next generation weapons systems, including the [redacted] system. The aircraft must also be able to operate from a 5,000 foot runway. Internal security should be a primary focus of the program logistics as the only reason we discovered the [redacted] was due to the infiltration of the Soviet block by a model maker. Due to these risks a standard black program staff rundown will be conducted for all staff involved. This message must be destroyed after decoding, retaining only the internal encoded version for the purpose of review. We look forward to the cooperation of the Lockheed Martin corporation in order to usher in a new age of aerospace based security and deterrents to the Soviet block. We must create a 6th generation fighter to retain air superiority over the Soviet block, our national security depends upon it.

Mentor
#2
As @Craftydan stated in his MiG-37 Ferret thread, there was a time in the mid to late 80's when cold war hysteria reached an all time high and the plastic model manufacturer Testors decided to capitalize on this by releasing a hero and a villain. With CraftyDan picking up the MiG-37 i just couldn't let it go unopposed and I had to whip up an F-19. Testors, who had their ear to the ground when it comes to potential new aircraft, knew that if a next generation fighter were to be ordered it would most likely come from the Lockheed Martin secret development group called the Skunk Works, who were responsible for the legendary SR-71 Blackbird (project code name "Oxcart"). The Lockheed Martin Pave Blue stealth research aircraft would also allow them to create a low observability design found in the F-22 and the F-117. Having determined Lockheed to be the most likely builder of the new aircraft Testors was able to draw from their previous designs and release a reasonably realistic kit into a military aviation obsessed market. The selection of Lockheed Martin as the likely manufacturer is why the F-19 shows a familial resemblance to the SR-71. Basically, it's a shortened SR-71 with inboard engines in place of the nacelles. Personally, I think it's a sharp looking airplane and I expected it to be a challenging design to keep stable, however initial glide tests suggest otherwise. 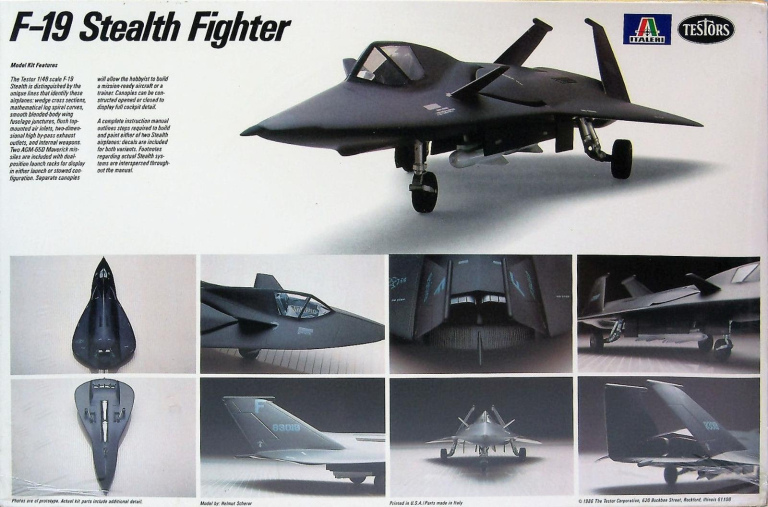 #6
Hmmm, this looks almost like a Ramjet SR 71. I get the distinct impression that this is going to need a lot of speed to stay in the air. Good luck.

Mentor
#8
Thank you both. I have to run off to a briefing for my commercial rating, but I'll be posting pics of the prototype glider and possibly a (very) short glide test when I get back.

#9
I built that model back in the 80’s. The Russian one was always more practical looking but the Lockheed model looked like a baby SR-71 so, you know, way cooler. I anxiously await the flight video.

Mentor
#10
jfaleo1 said:
I built that model back in the 80’s. The Russian one was always more practical looking but the Lockheed model looked like a baby SR-71 so, you know, way cooler. I anxiously await the flight video.
Click to expand...
Got back from my briefing last night and had to get to bed for work today, so I didn't get a chance to post pictures. I do have to get to work in the next few minutes, so I can't really take and post pics right now. I get off at 10am central and I'll probably have enough time between classes to do a glide. 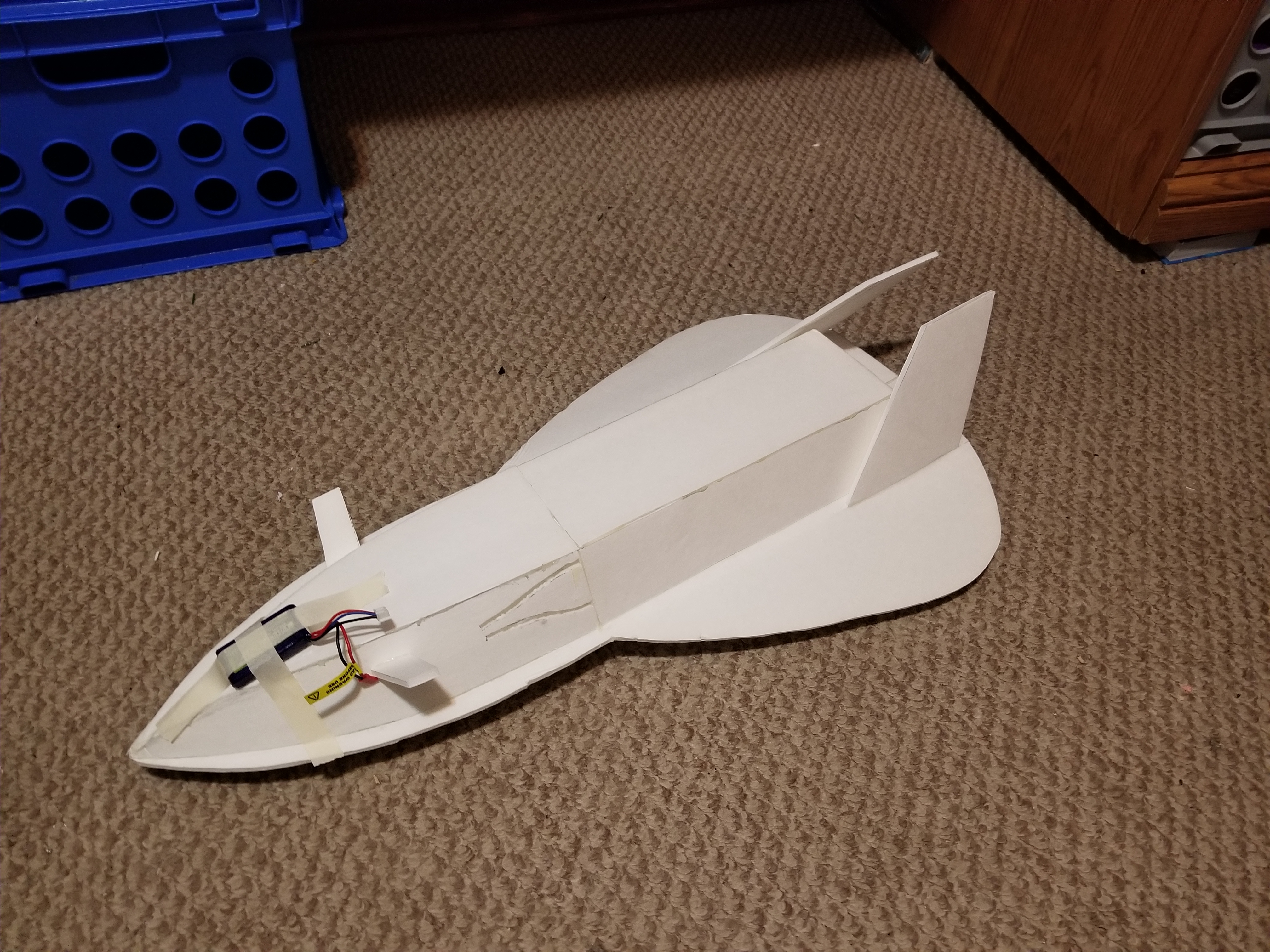 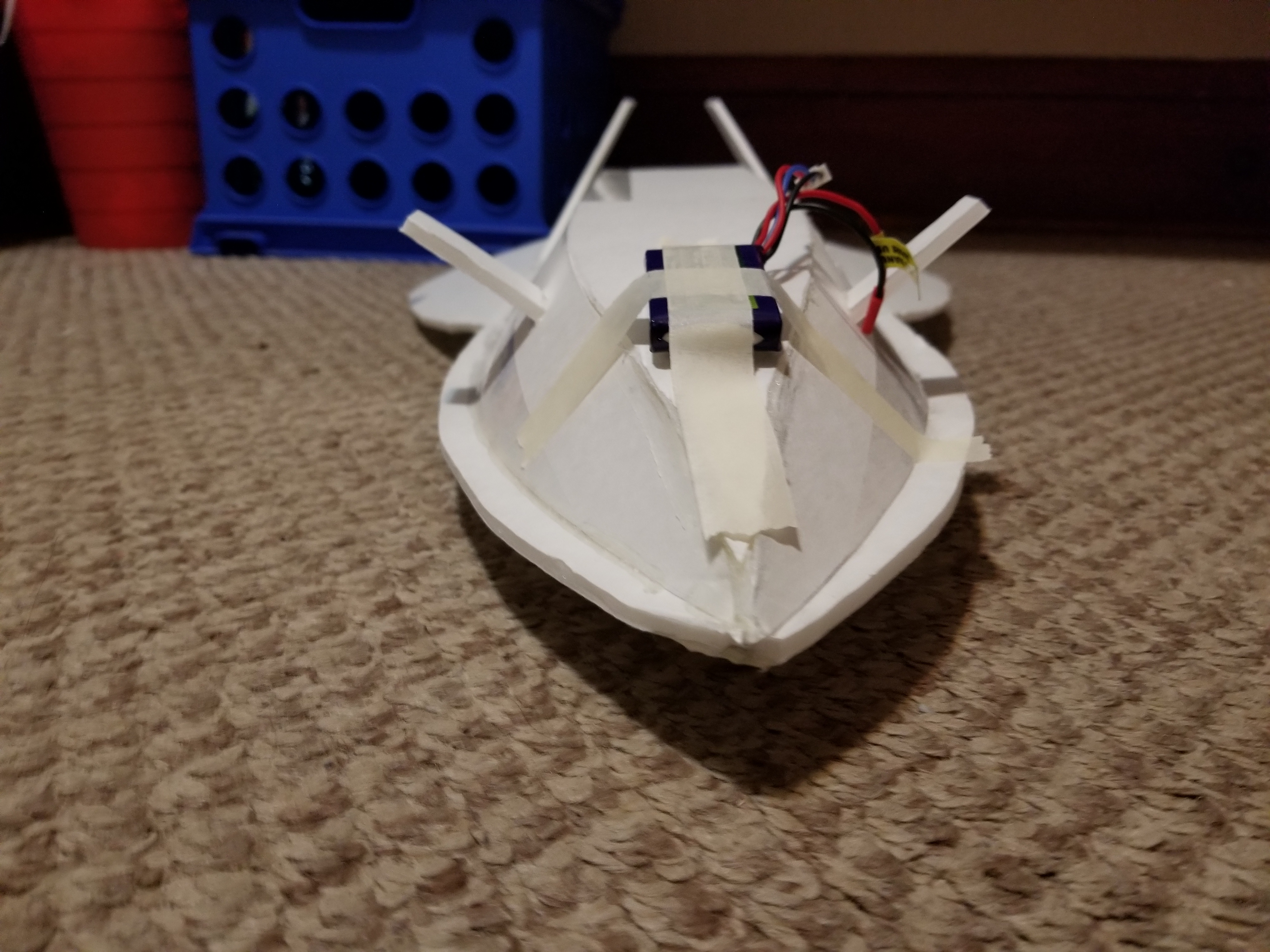 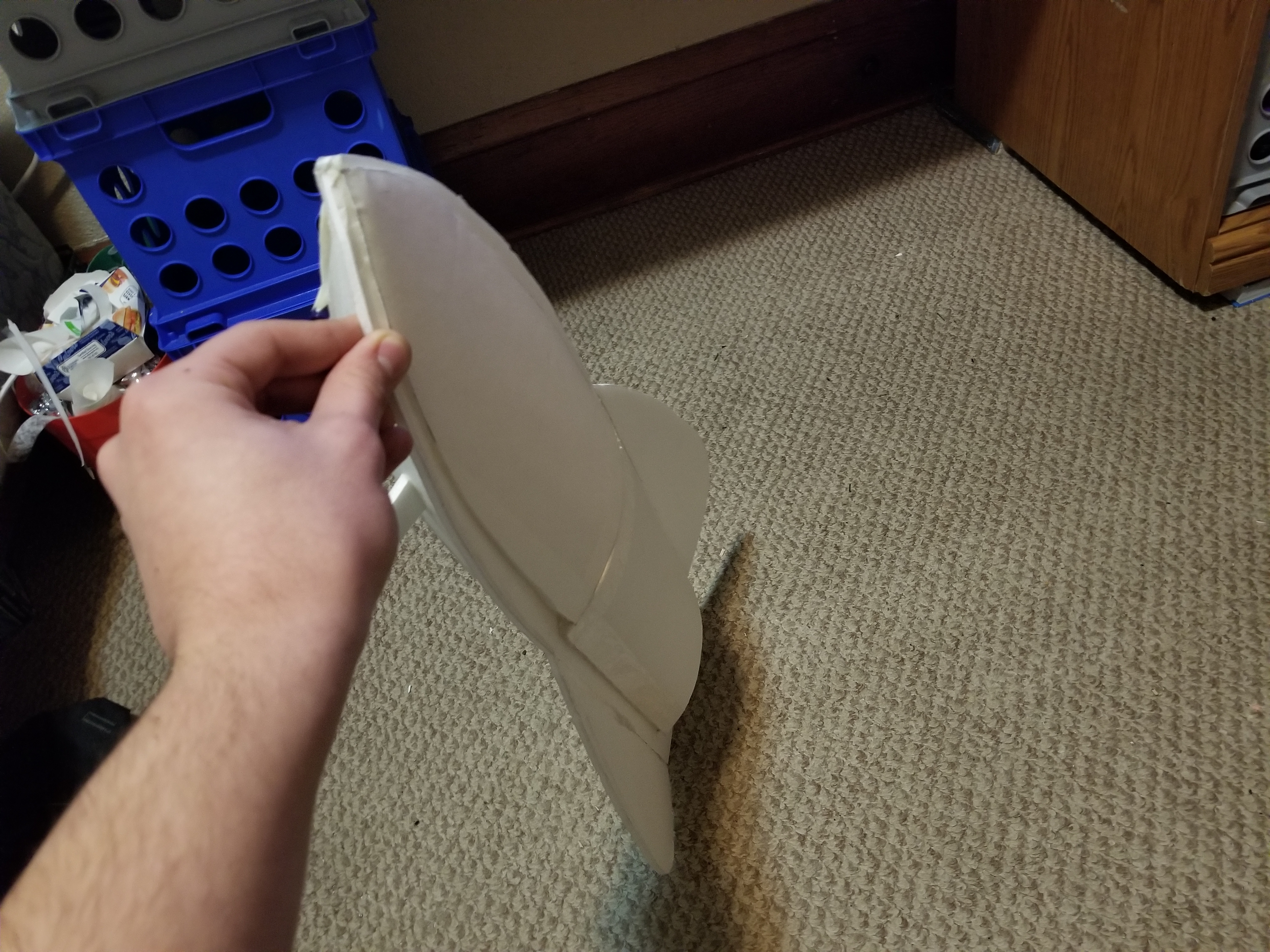 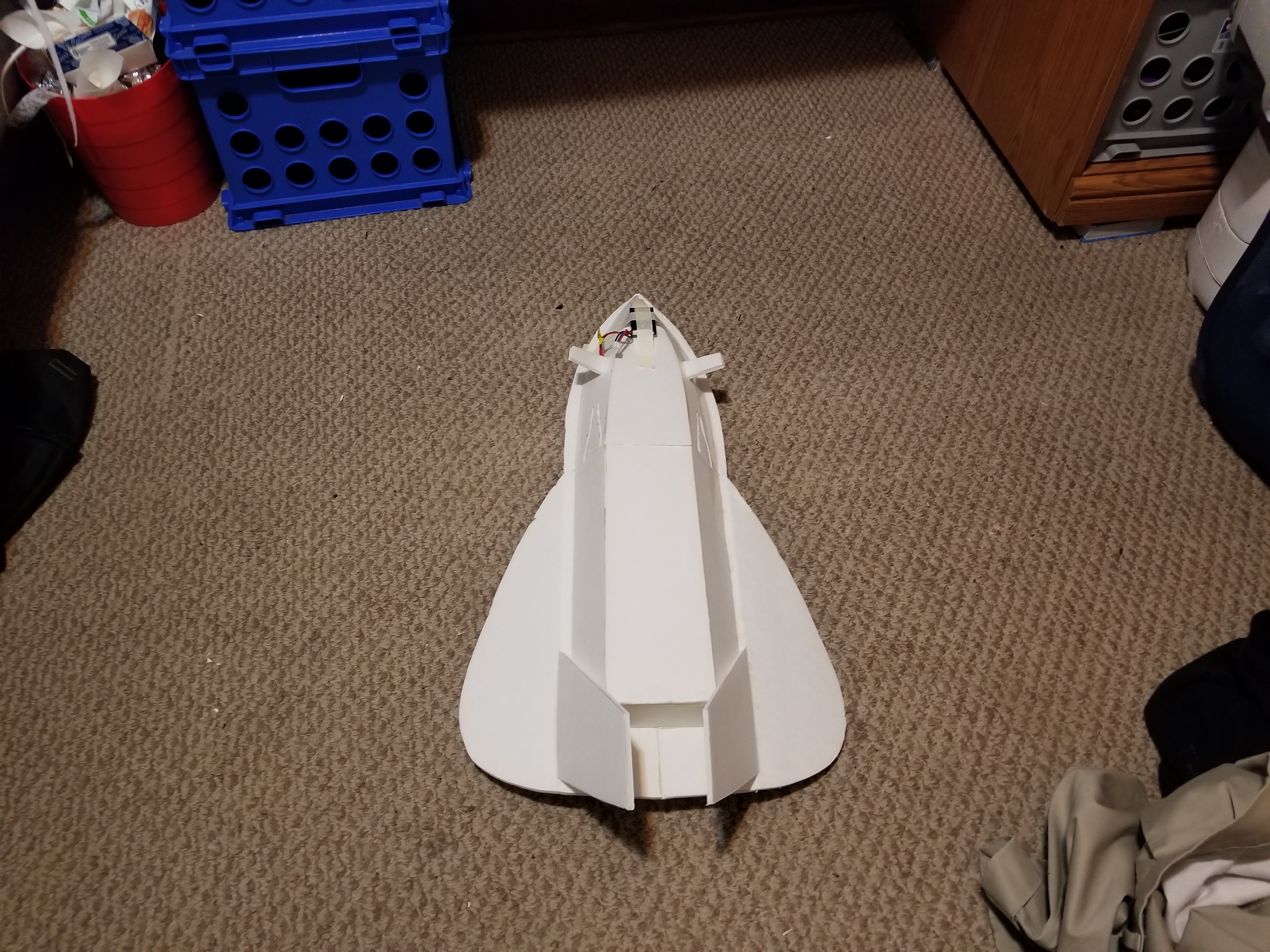 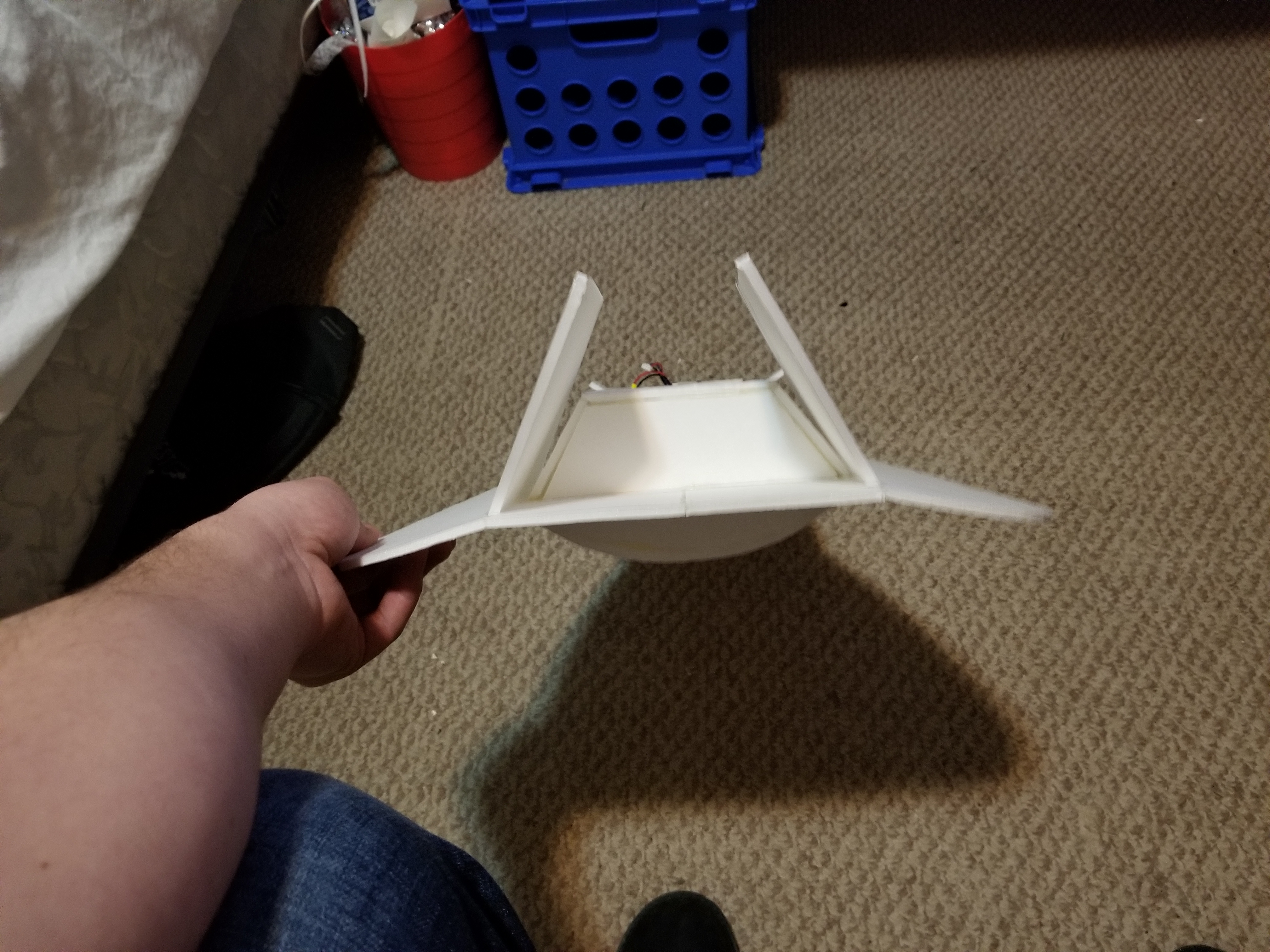 Mentor
#12
For some reason the shape makes me think of a flying hampster... cool alternative skin opportunity?

Mentor
#13
Pics added. This version I didn't make plans for. I just found a 3 view rendering of the plane and roughed it out of foam. There are a few things that I want to change as far as the build process goes. I am going to keep the rounded bottom as I didn't think it was too difficult to build, but the top half of the fuselage needs to be addressed as it doesn't look close enough for my liking. Obviously the canopy is not currently attached, but I didn't think I would need it for glide testing. It really surprised me with the limited glide tests I could do in the house (not going outside due to -75* windchill here in North Dakota) it's surprisingly stable and has a decent glide ratio for what it is.

#14
I think your doing fine with this like you said address the top and you will be there. Surprised it is stable for glide but it is a lifting body hybrid so should be ok. Good luck. If it gets to plan stage it would look good with SHIELD logos next to my Quinjet. EDF or prop?

Mentor
#15
jfaleo1 said:
I think your doing fine with this like you said address the top and you will be there. Surprised it is stable for glide but it is a lifting body hybrid so should be ok. Good luck. If it gets to plan stage it would look good with SHIELD logos next to my Quinjet. EDF or prop?
Click to expand...
Thanks! The current plan is to retrofit the glider with a prop to test the viability and controllability. When I do the plans I will probably make it a prop in slot with the option of running a 64mm or 70mm fan. I'd like to have my final version to be powered by a fan to keep it clean, but I only have 2 fans at the moment, one of them in an F-16 where it will stay, and one in an A-4 that needs to get gutted. There's a couple other jets I'd like to use that fan for (zephyr1's F-104.) So, I'll probably use a prop for the time being unless I run into some extra cash. I'm building a PC right now, so that's taking up a decent chunk of change. Who knows. I might be able to swing a 64mm fan and ESC to get it in the air without a prop.

Mentor
#16
Well, I found a pretty reasonable EDF power package. Guess I'm building the final one with a fan.

https://store.steampowered.com/app/347250/F19_Stealth_Fighter/
Click to expand...
It's already in the steam library. I'll be giving it a shot tonight after my aircraft systems class.

#19
Hey, not trying to you in any trouble here. But who knows what I’ll have on hand if this latest Quinjet crashes and burns. Currently have 2 3s 50mms and a 4s 70mm without homes. But I could swing another low cost 64 probably too. Your going to get me in trouble now.... Good luck.
Oh and on your ratings, good luck too, A & P Mechanic to pilot!

Mentor
#20
jfaleo1 said:
Hey, not trying to you in any trouble here. But who knows what I’ll have on hand if this latest Quinjet crashes and burns. Currently have 2 3s 50mms and a 4s 70mm without homes. But I could swing another low cost 64 probably too. Your going to get me in trouble now.... Good luck.
Oh and on your ratings, good luck too, A & P Mechanic to pilot!
Click to expand...
Thanks! I have a community day with the rest of the aerobatics team and then a local commercial flight tomorrow. I finally get to fly the new planes we got (PA-28-181) and get reacquainted with it.

I'll probably still try to fly it off of a quad motor first, considering that more people are likely to have them laying around, but I'm on a bit of an EDF high at the moment, so I REALLY want to get it to fly off of one.
You must log in or register to reply here.
Share: Facebook Twitter Google+ Reddit Pinterest Tumblr WhatsApp Email Link
Menu
Log in
Register