#1
My second entry is going to be a seagull, based on The Gull by John Conway Jones, from Outerzone: https://outerzone.co.uk/plan_details.asp?ID=6712

I've attempted a magnificent frigatebird for a while without great success, so I'm excited to try a bird from an existing plan.

I plan to keep it at the current scale and build it out of foamboard. I've been trying to think of how make a folded symmetrical wing that also curves.

Mentor
#2
Will be watching with interest... there's a pterodactyl wing I've thought of doing that will have similar challenges - will happily follow your lead on this

#3
I think the biggest challenge is making the wing. The plans show a symmetrical wing, and I came up with this idea for using cutouts like FT uses for polyhedral in wings like the Tiny Trainer. Being symmetrical, I'll do some cut-outs on top and some on the bottom. The cutout on the left produced the section on the right.

Lessons learned:
- Cutouts were 1/4", which is too much.
- The spar has to be cut. I was using two strips of foamboard for the spar, and had to cut through both and mash a V into them to get them to bend.
- The foam on the opposite site needs to be scored to allow it to fold
- Once built with glue and tape, it's rock solid, despite all that cutting.
It's either going to need a lot of packing tape, or covering film or laminate to hold it tight. I have some 1.5mil laminate that I bought on Amazon. I'm not very good with not wrinkling it, but I'll probably use that or real Monokote. If I build with the water-resistant foam I can use the blue tape trick to hold things as I set each section, then cover the whole thing at the end.

The drawing below shows four ways I tried today of finishing the trailing edge.
- Top right: just folded together and left alone.
- Top left: compressed with covering iron after it was closed.
- Bottom left: compressed with hot iron before folding (notice the melted foam oozing out the side)
- Bottom right: trimmed 3/4" of paper and then sanded away foam prior to folding together. This is my favorite for sure.
Much of the seagull plan has the trailing edge taken up with elevator or aileron, so I may not end up using this much but I really like it.

#4
I've been working on this off and on. I just printed the draft below on cardstock to see if I have the angles right. I've been putting off cutting foamboard while I think about and build my Rascal CNC.

#5
Pretty happy with the folded cardstock version. Made some mistakes that will help the real build later. Now to figure out how to mount servos & get a motor and battery into the super folded nose. 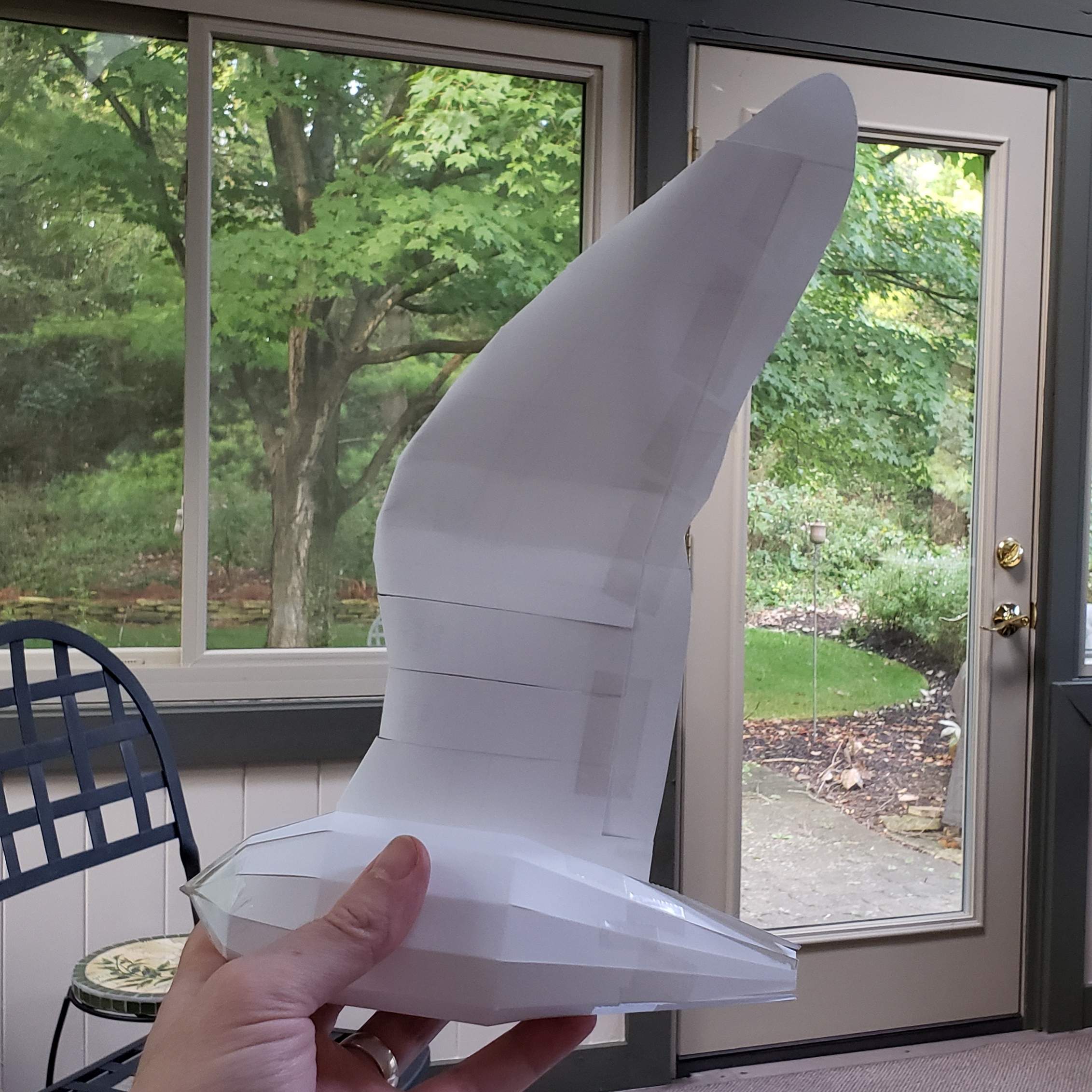 #6
That is crazy COOL!!! 😎😲👍👍
The almost limitless possibilities of Foam Board! Definitely seeing where this is going. 😉

#7
I am still working on this. Have about 50% built of a full size version. Putting 3D design software on my New Years to-do list again this year. It's a bear to work this out in 2D.

I'm a little concerned that Kanai had to flatten his wing to get his seagull to fly well:

#8
I always feel like I missed out, not learning 3D software when I was younger. It's so advanced now, this Old Fart may never get it. 😖😳

Flying LIKE a Bird may be impossible in RC... The power of a Bird's Breast Muscles and the finer Muscles in the Wings might not be replicated....

However, thanks to the Corsair and a few others, aerodynamically, you shouldn't have to FLATTEN the Wings to get it to FLY.

It's all in the shape! 😊
I can't do it... but it sounds like you can. It will all be in the shape.
Maybe a bit of undercamber. A Bird's Wing naturally has a little...

Have a few adjustments to the plans and some build instructions to type up tomorrow evening.

#10
I've submitted the plans as a resource: https://forum.flitetest.com/index.php?resources/rc-seagull-by-fidget.117/
Also attached below as pdf and svg.