#1
Hello All, this is my entry into the 2020 Flite Test Forum Community Classic to Modern Aircraft Design & Build Challenge.

When trying to decide on what plane to enter in the competition I original looked for planes of planes that were on my list to design and build. However after thinking about it more, to stay closer to what I see as the spirit of the competition I decided that I wanted to build an aircraft that was conceived and designed as an balsa RC plane, not RC plans based on an existing airplane.

I asked several of the older guys at my field what they considered to be a classic balsa airplane kit. They threw out planes like "Chipkmunk", "Stick/ugly stick", "Telemaster" and "Lazy Bee" (Which I almost picked). However, one of the older guys mentioned a plane that a former member had years ago that looked like an old science-fiction spaceship. Everyone got super excited when he mentioned it and they all thought it would be a cool plane for me to build. So after some googling I finally found my entry, 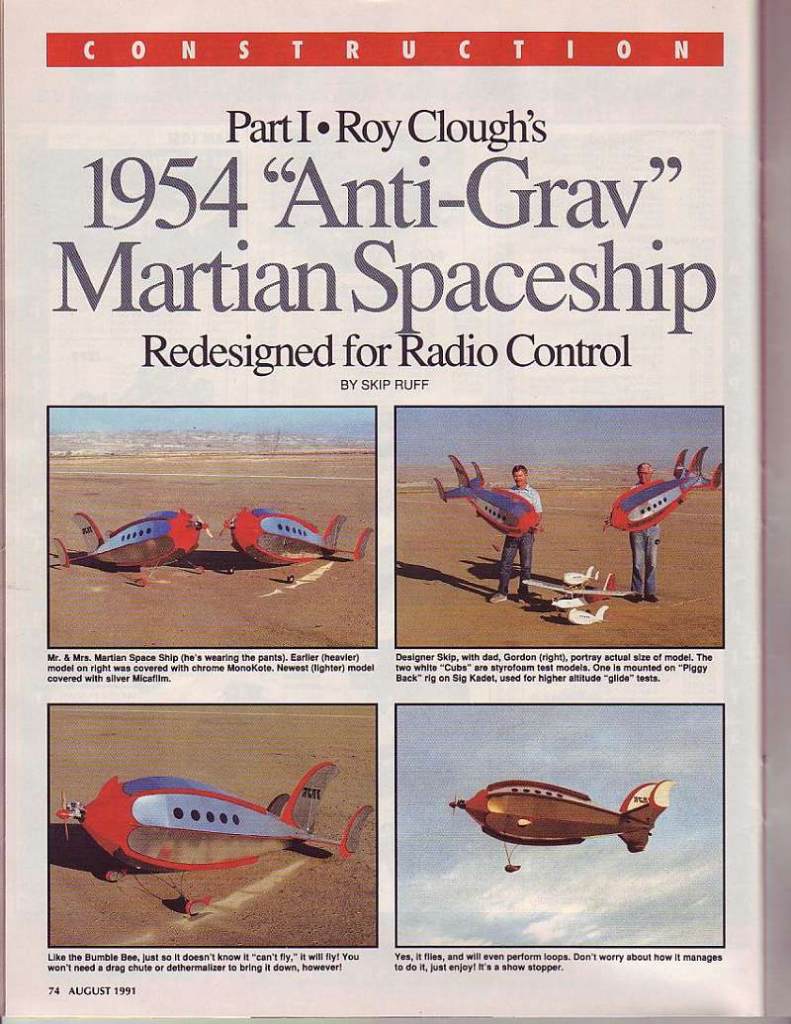 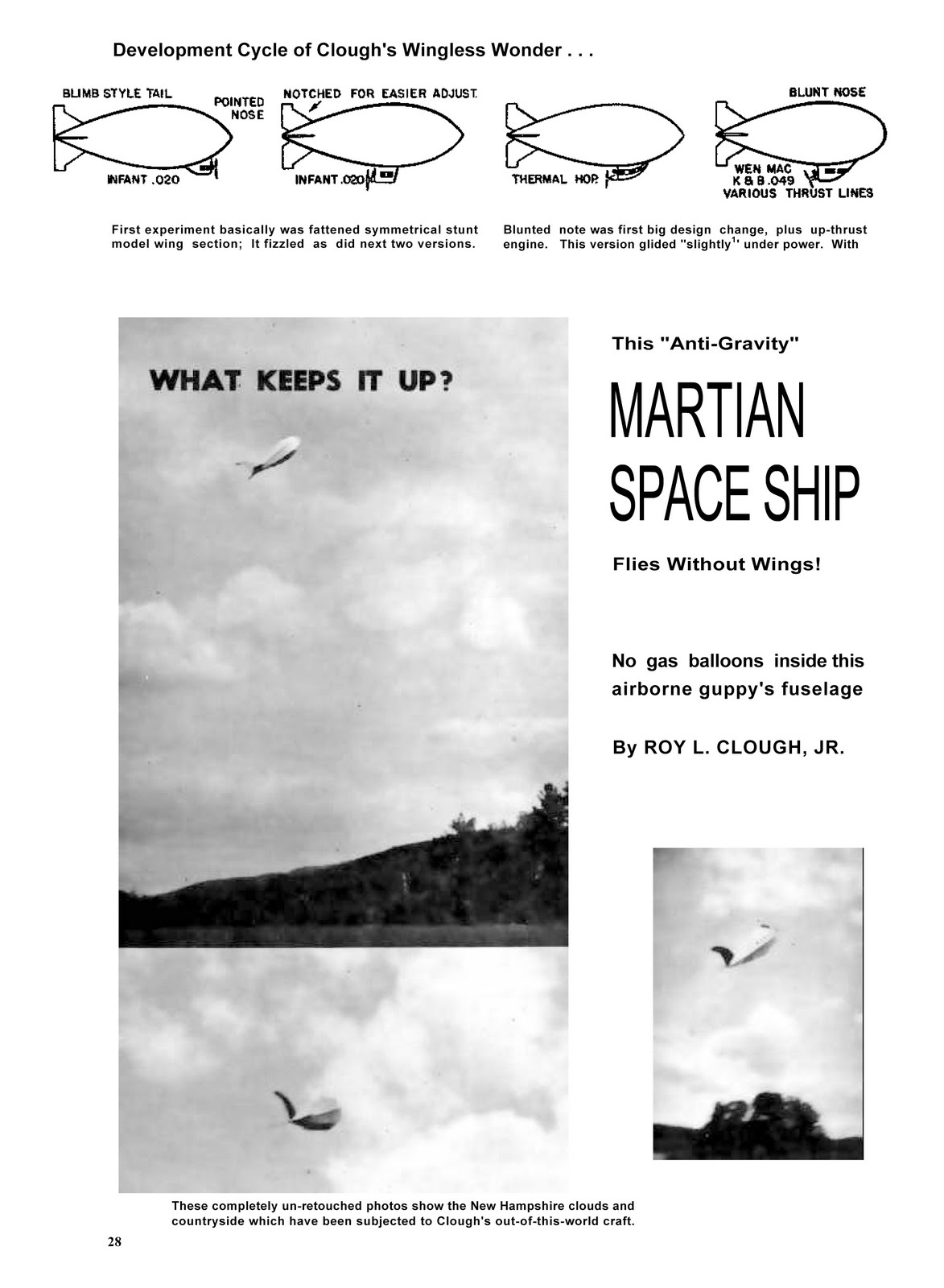 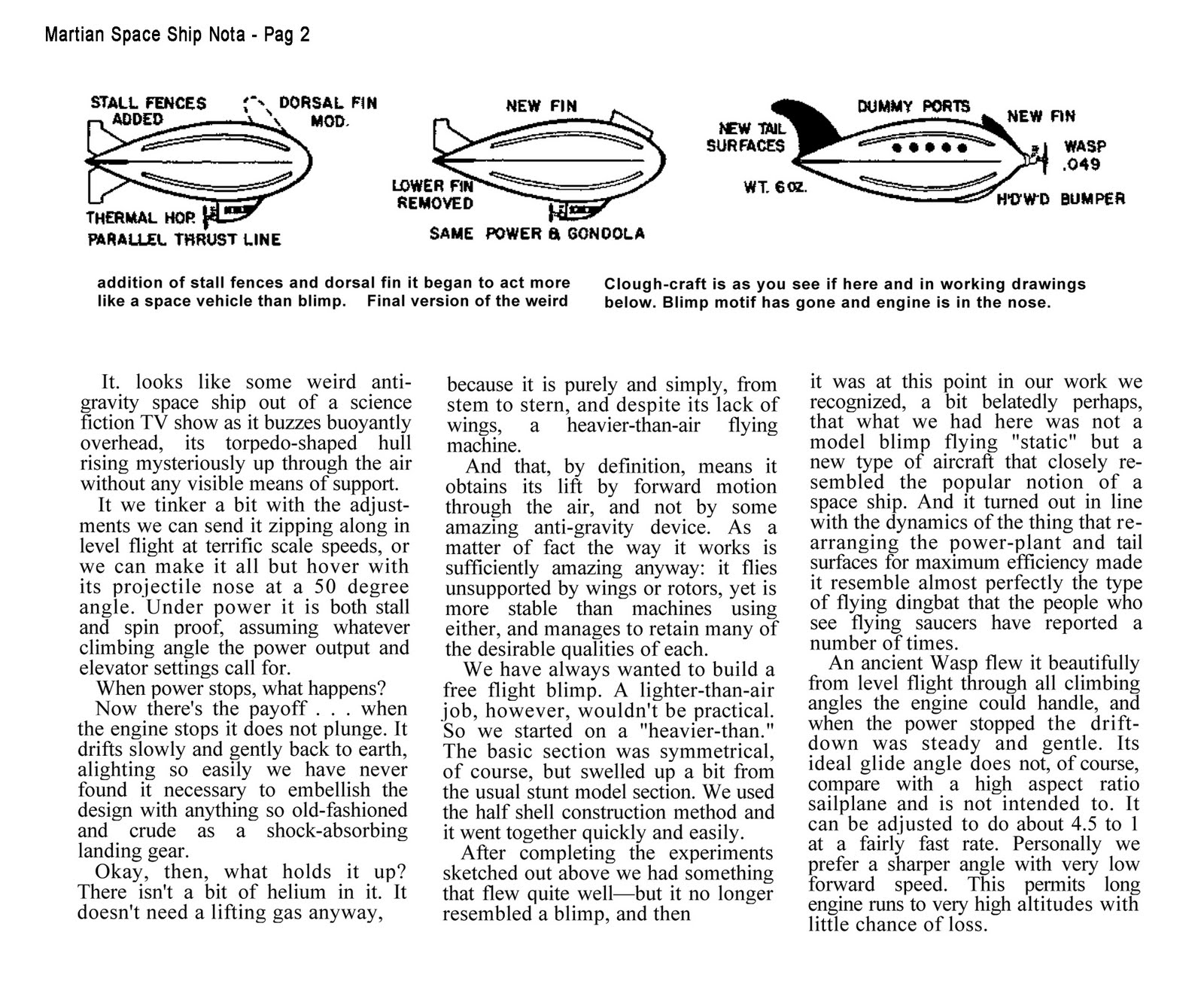 Here are the original plans I found and will be using to design the foam-board version off of: 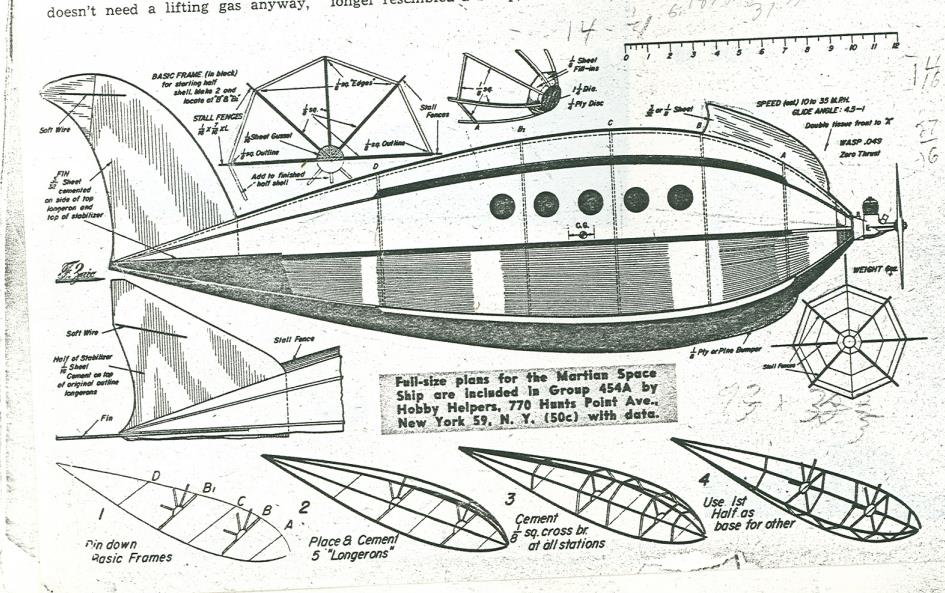 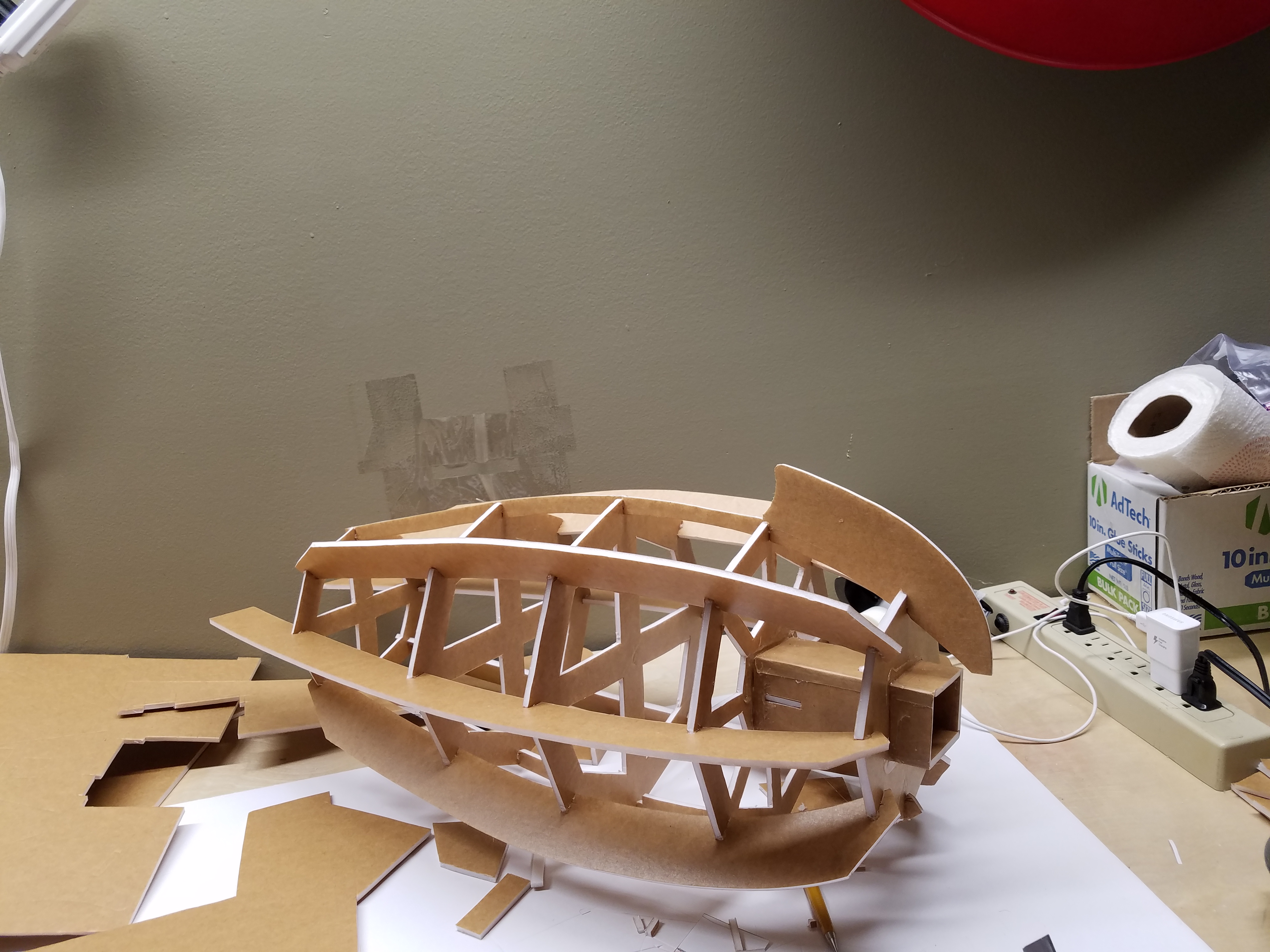 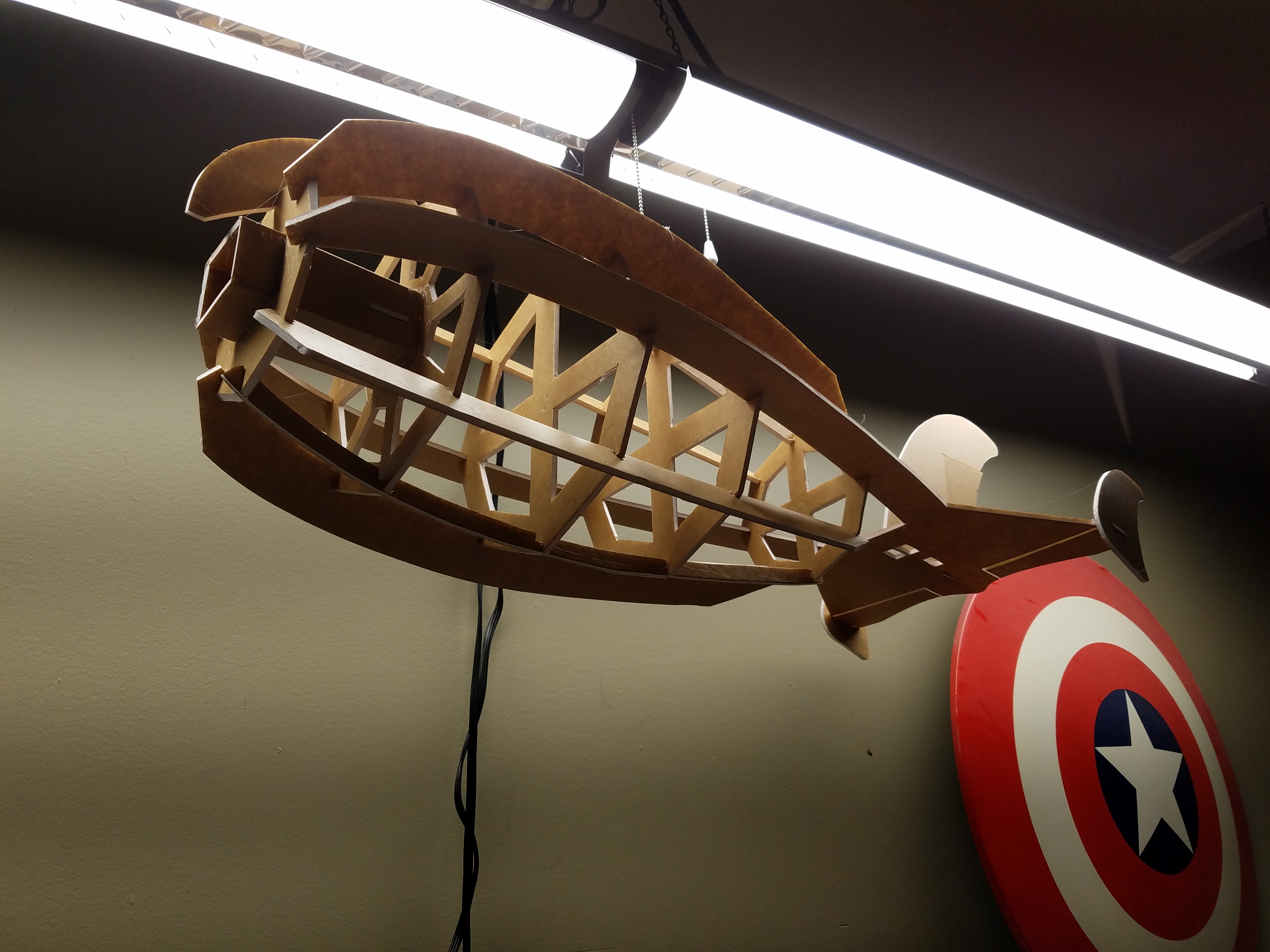 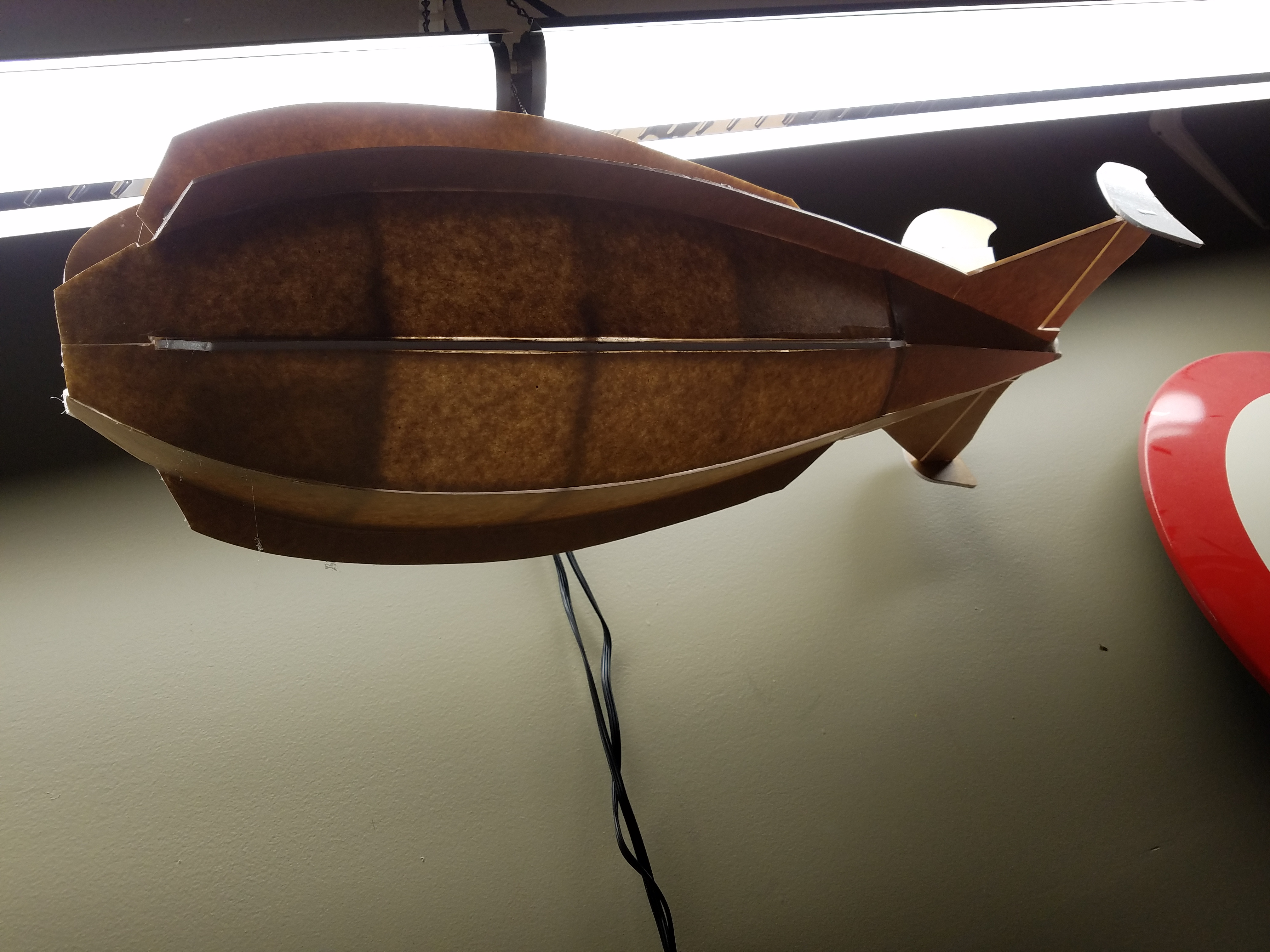 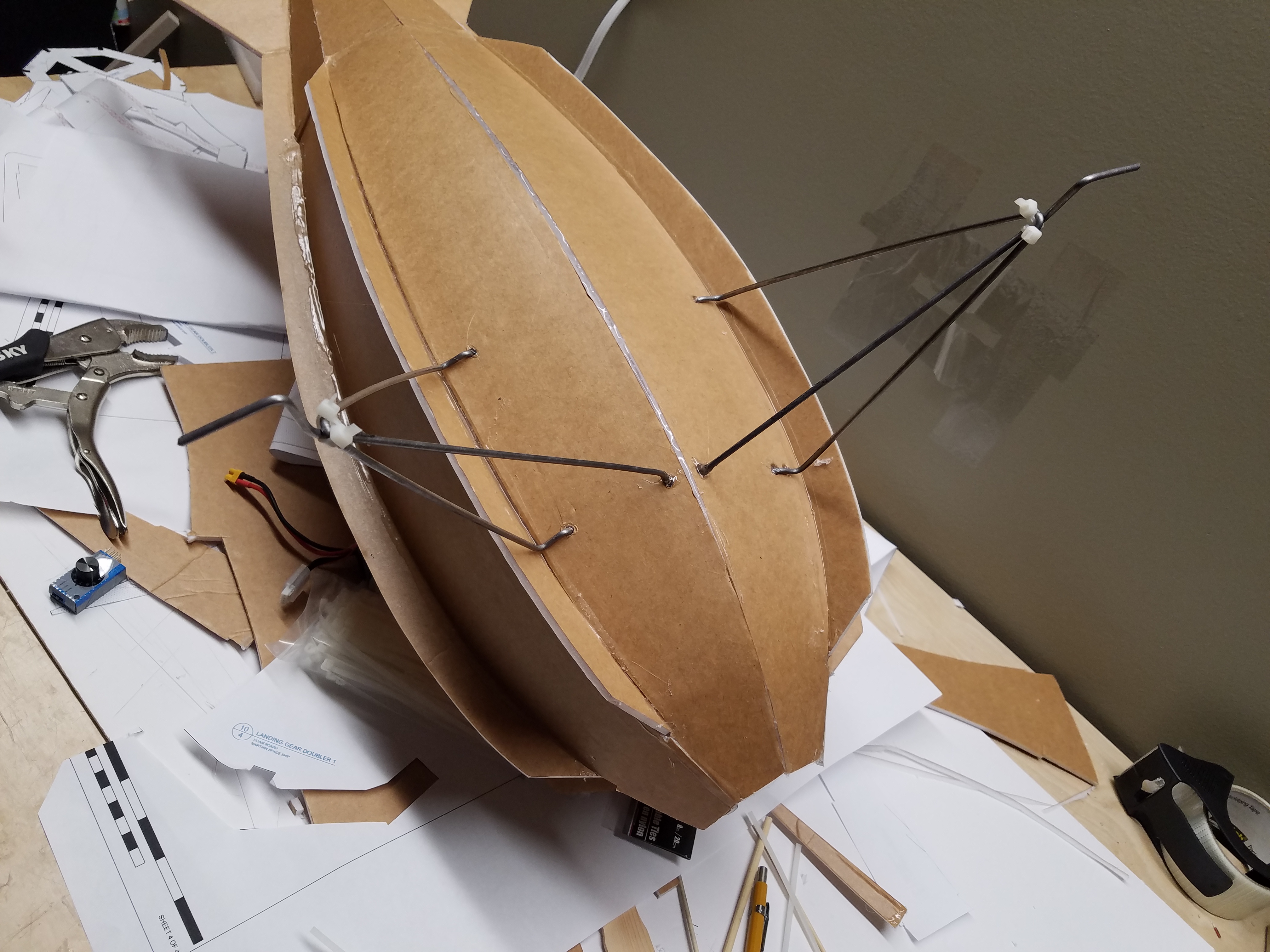 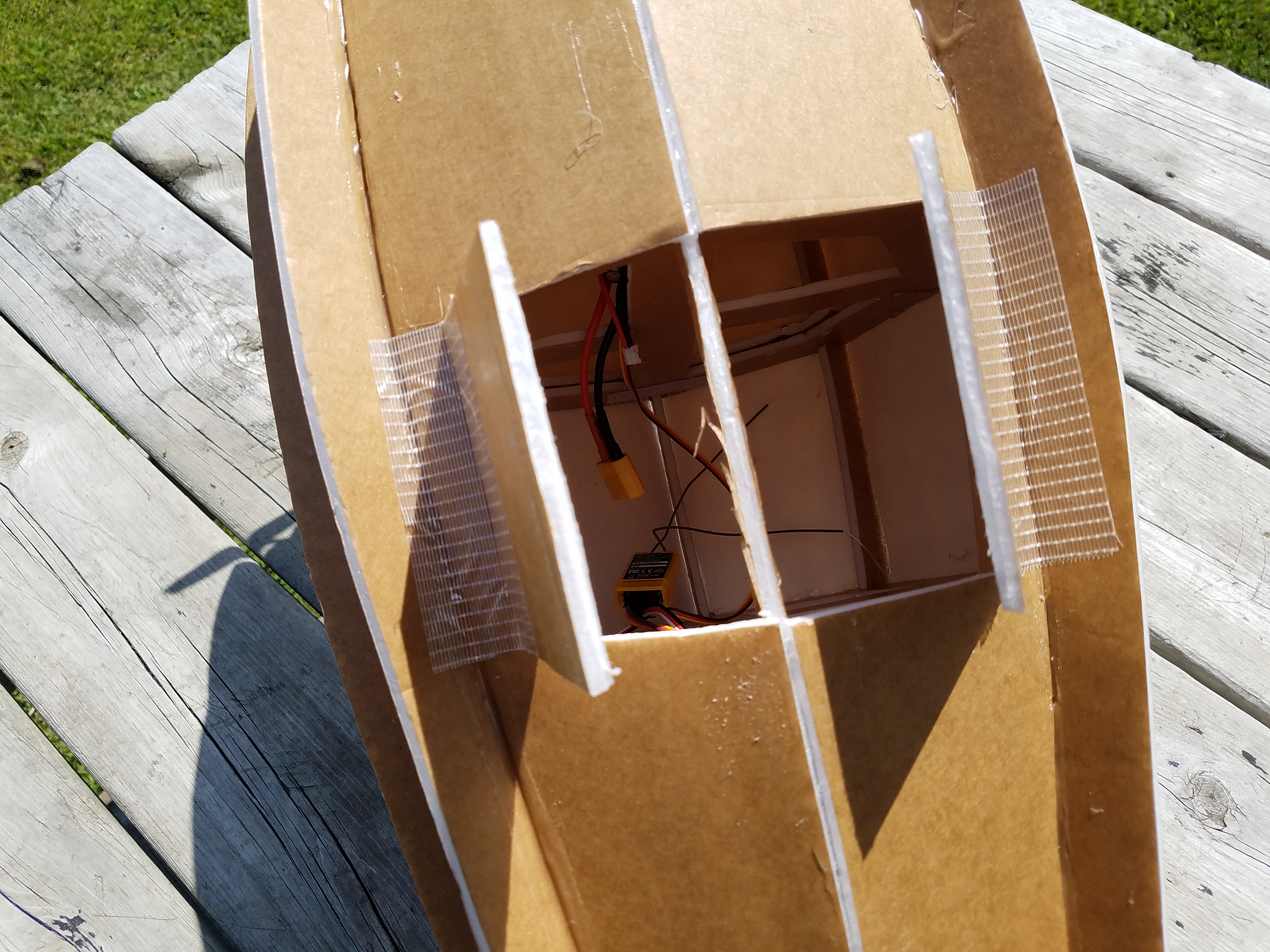 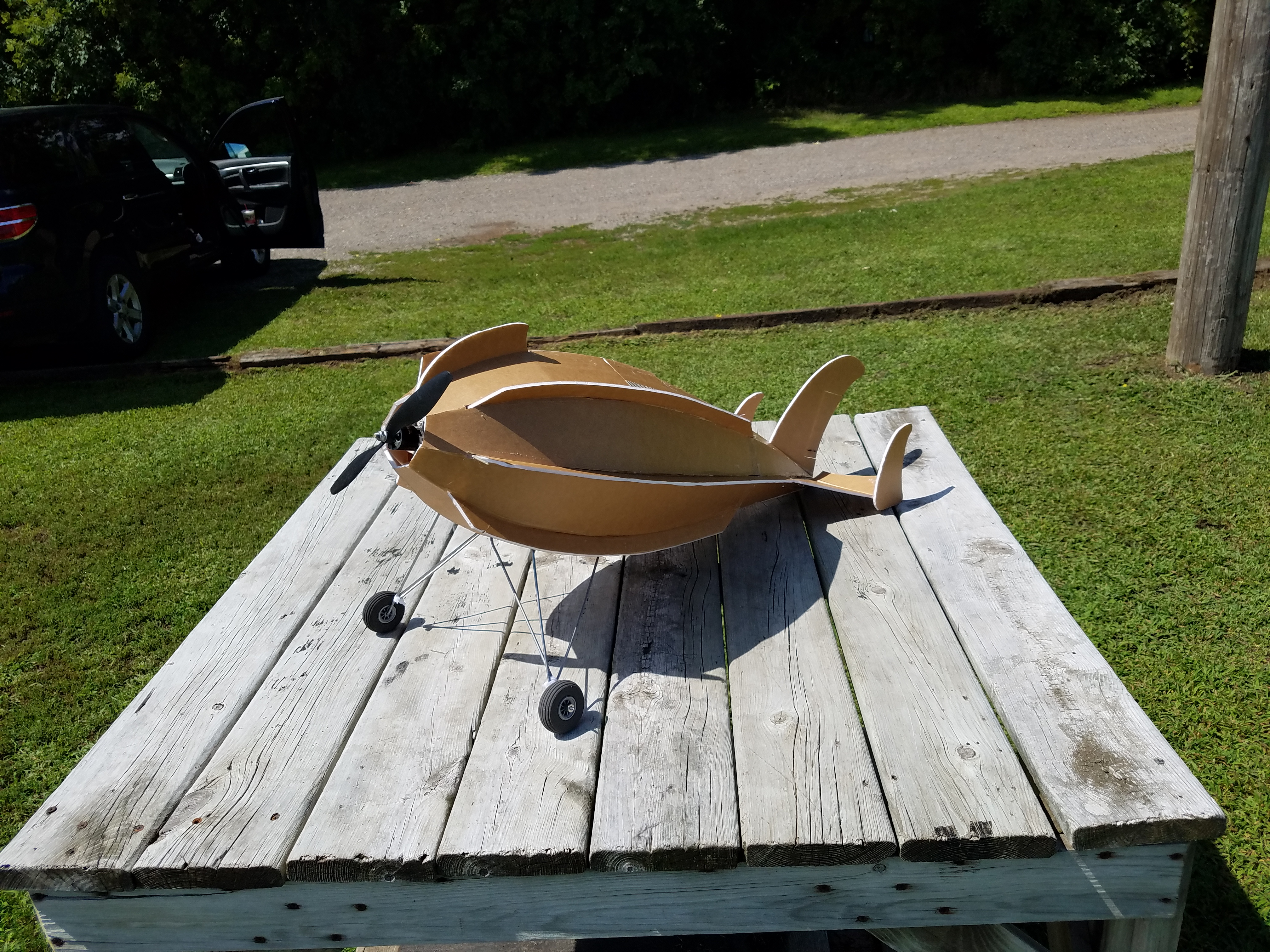 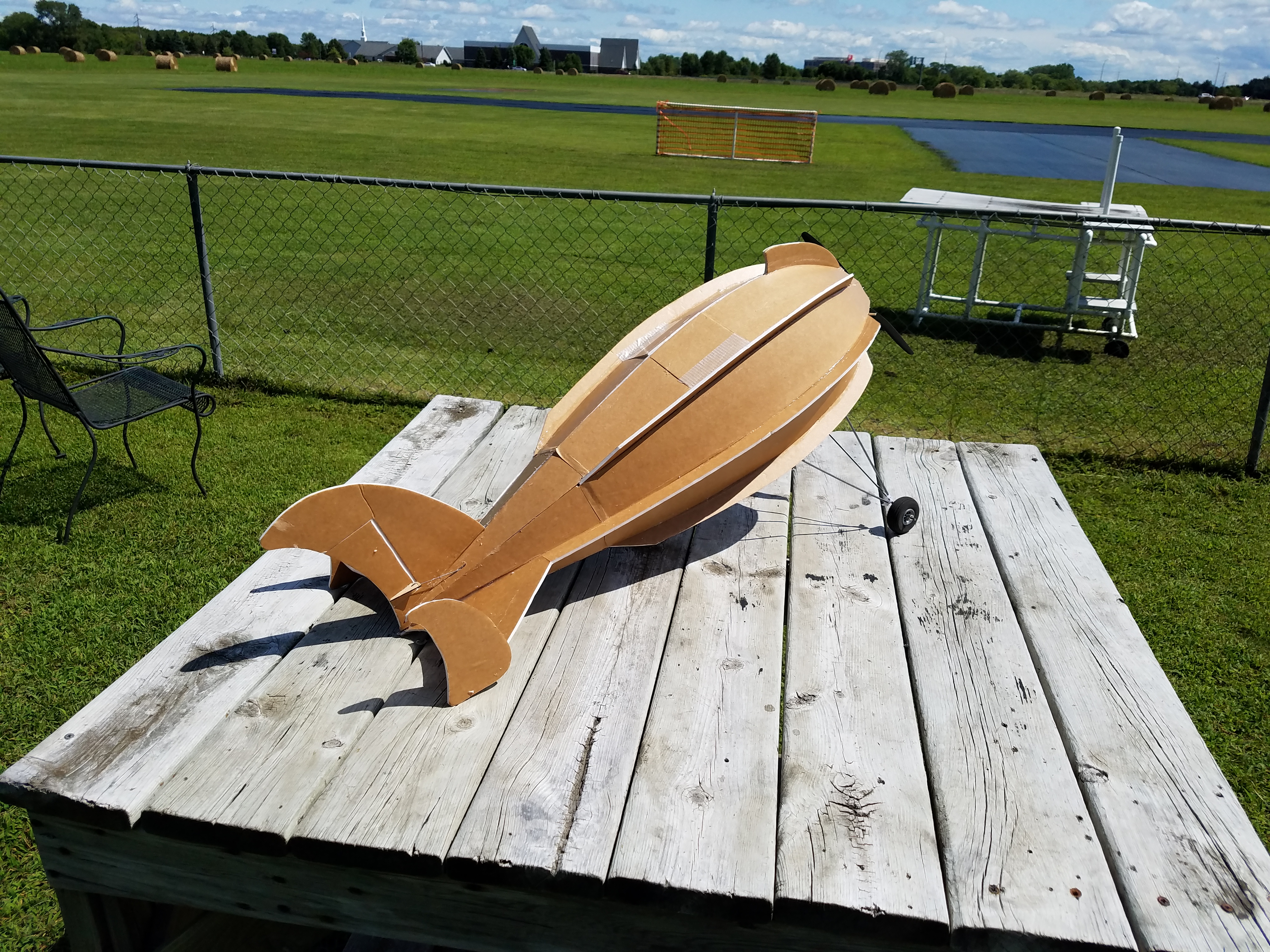 I have some video I will post in the future. A lot was learned, but I would not call any of the flights successful.

Torque roll is a big issue. In the initial first few flights it wanted to do doughnuts on the ground. After adding some counter elevator and rudder trim I was able to get it in the air, however it would get a nasty pendulum swing to it and be uncontrollable. On the third "flight" I pancaked it and the landing gear tore off.

After thinking about about it I remembered a recent video by Tom Stanton Drone Pendulum Fallacy where he talks about the issue I was having. Having a lot of mass far from the CG of a vehicle vertically actual causes extra instability without wings or large fins to counter the pendulum action that develops. Having the battery and landing gear in the lower part of the ship was not a good idea on my behalf. With this realization I tore off what was left of the landing hear and mounted the battery in the center of the ship.

This attempt went much better (still not great). The plane had no trouble staying in the air, but the control surfaces were not terribly effective and it was very squirrely while wanted to fly like a spiral foot ball. If I let is spiral it flew very steady and straight. After 8 or so 30 second fights and long walks into the field to retrieve it I finally ran out of props and was done for the day.

What did we learn:
-Lift is not an issue, this thing was flying at 1/2 throttle on a C-pack.
-A C-pack motor is too big for this, causing too way too much torque roll.
-Ditch the landing gear and mount the battery in the center of the ship

What are we going to do moving forward:
-Build power pods with a B-pack motor with 8" prop and F-pack motor with 6" prop to test.
-Build a series of modular fins I can add/remove from the ship to test various combinations of fins
including:
-Extensions for the fins that run the length of the ship to have them project and additional 1/2"
-Extension to the front fin to make it larger.
-Additional fins similar to the vertical stabilizer to fasten to the front of the ship.
- Extensions to increase the size of the vertical & horizontal stabilizers.
-Build a reinforced battery tray inside the ship to allow for mounting the battery in the center of the
ship. (In the final test flight I was testing how it flew with letting it spin, and the battery came loose
and went flying out of the ship. They lander about 300ft apart.)


With all of these modular items I will see if I can come up with a combination of motor to fins that keeps it as close to the original design, but still flyable. I am going to try to get things ready to test on Sunday if weather permits. Otherwise it will probably be 3 weeks before I will be able to get out to do the next round of testing.
Last edited: Aug 20, 2019

#8
I was looking through an X-wing thread and in there, this craft was brought up. the discussion was yaw stability/control in a seemingly bobbely model.

Can't wait to see this one flying!
Even better to see a couple at FF next year (hint, hint...)
(Could even make a night version like Casper!!)

#10
FoamyDM said:
I was looking through an X-wing thread and in there, this craft was brought up. the discussion was yaw stability/control in a seemingly bobbely model.
Click to expand...
So in my research on this plane in some of the original designs there were fewer and smaller fins down the lenght of the craft, and no fin up front. With what I read after improving these it performed much better. One thing I will need to look at as I test this is the fin up front in the center. I have seen several configurations of this, each starting why a specific version is better. So in my initial testing I will probably build 3 versions of the fin and secure them with bbq skewers to be able to swap them easily to see which works best.

Can't wait to see this one flying!
Even better to see a couple at FF next year (hint, hint...)
(Could even make a night version like Casper!!)
Click to expand...
I hadn't thought of that, but this would look great with lights. I will have to be sure to install some. I wonder if I built it out of white foam board if it would light up good from the inside.

#12
With a Marvin the martian riding it as a fin... Lit from below with white, and colored with either tape or tissue. It would be worth the effort. To have a lit martian mobile.

#13
Horseman3381 said:
I hadn't thought of that, but this would look great with lights. I will have to be sure to install some. I wonder if I built it out of white foam board if it would light up good from the inside.
Click to expand...
https://forum.flitetest.com/index.p...ir-three-planes-full.59362/page-7#post-489867
😜

#14
I have added info on the initial test flights. See the second post above.

Mentor
#15
Might see if there is an affordable contra-rotating propeller setup you could get for her - that should nullify the torque roll problems!

#16
rockyboy said:
Might see if there is an affordable contra-rotating propeller setup you could get for her - that should nullify the torque roll problems!
Click to expand...
I may already have one sitting around. 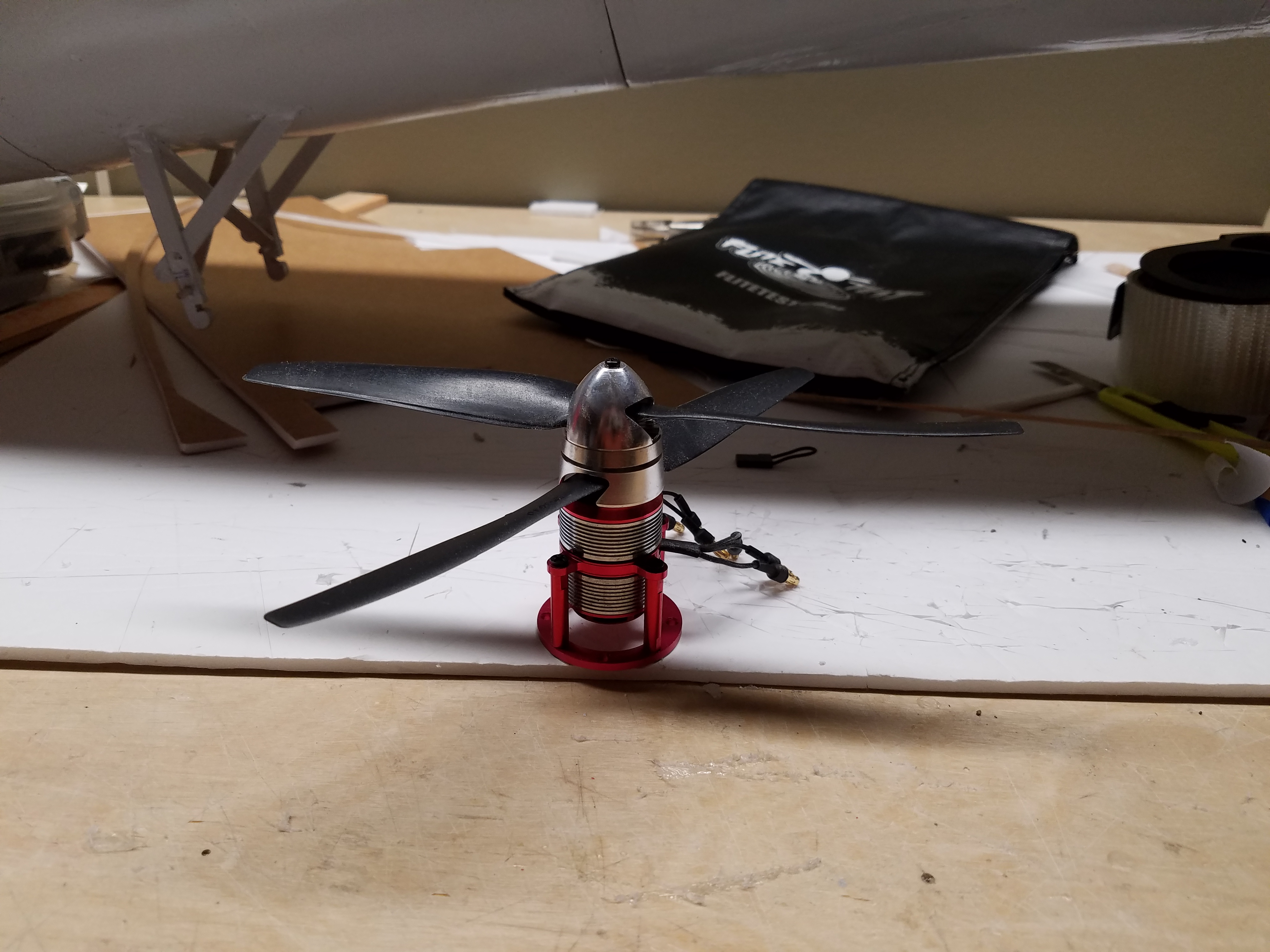 I'm hoping to get it to fly on an FT power pack, but we will call this plan C.

#17
Horseman3381 said:
I may already have one sitting around.

I'm hoping to get it to fly on an FT power pack, but we will call this plan C.
Click to expand...
Beautiful. Been waiting to see one of these utilized and a build that can benefit fully from it. I'm happy to learn this thing flew on the first shot, even with the issues. Now it's time to polish and make it practical and enjoyable to fly, and it seems like you've got a good plan for that. This is already unique but will be extra cool with contra rotating props!

#18
Could you please inform me as to what thrust angles you have tested and the effects of various thrust angles?

#19
This ship looks like it relies on the Coanda effect for thrust as the airflow wraps around the bulbous fuse, which is why it doesn't need a wing span but more of a wing chord. And like a football it has the same profile on the roll axis all around. In my uneducated theories I would say using a smaller diameter high pitch prop on the F Pack would work better. That's where I am putting my money.

As for the pendulum effect you mentioned that makes so much sense. Center of gravity is completely different from center of mass. The combination of the landing gear and the battery being low would give you the swinging action. You changed both at once though right? what if you still had the landing gear on and only centered the battery? This ship would be fun to tinker with and figure out. I'm jealous, good on ya man. Cheers

#20
Hai-Lee said:
Could you please inform me as to what thrust angles you have tested and the effects of various thrust angles?

Have fun!
Click to expand...
In my initial test I had around 4 degrees, and on the ground it didn't seem to do much. I have been going back and forth in my head as to weather thrust angle would do any good on this. I'll do some testing and let you know what I discover.
You must log in or register to reply here.
Share: Facebook Twitter Google+ Reddit Pinterest Tumblr WhatsApp Email Link
Menu
Log in
Register