#1
Hey howdy ho,
Been busy messing with *copters (* = single up to octo) in various numbers for quite some time, even some with servos. Really want to do more winging it, since from an efficiency / flight time stand point, you should get way more bang-for-your-mah with a fixed wing than rotating wings. Really not a good LOS wing pilot at this point, decent at FPV, and have a great deal of experience with these Flight controller thingys from all my messin with *copters. So in this thread I'll be focusing not on the plane builds, but rather sticking Flight controllers in a few planks, tracking my progress, showing various hardware, firmware, and config options, and babbling on aimlessly. I plan on starting out with straight passthrough, Adding telemetry, FPV/OSD, moving on to stabilized flight, then autoleveling, and on up to autonomy. I've got a couple AirDTF DTFc, Matek F405-Wing flight controllers, a couple Pre-formed EPP foam planes, and some FT Foamboard kits to fly along the way. Here's some of the FC/RX gear that we'll be playing with: 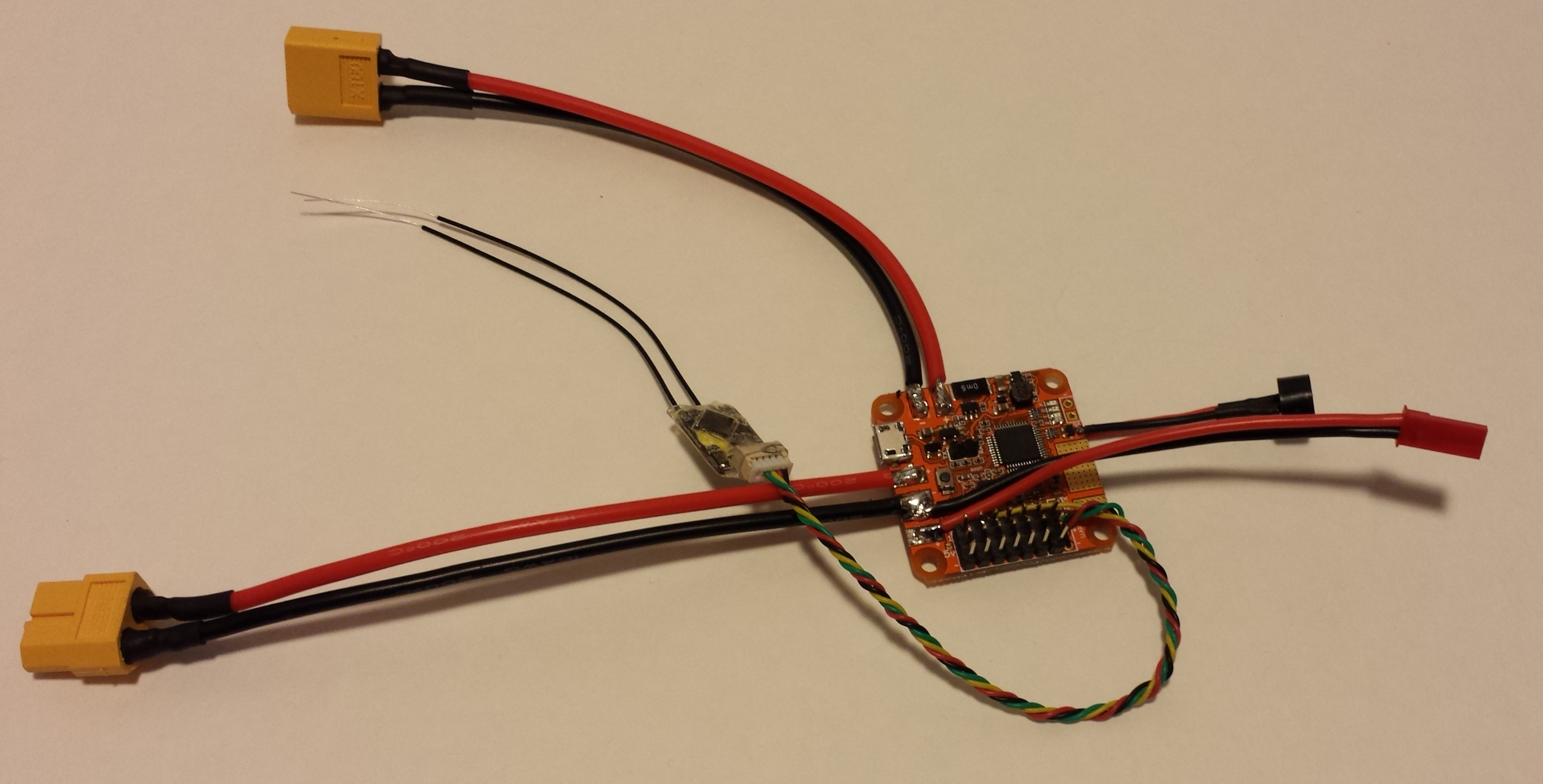 Both of these have Current and Voltage monitoring so we can keep track of our battery state with radio telemetry and set up audible warnings.

I've been working on a Strix Nano Goblin on and off for several months, but the wind and weather has kept me from doing much other than bench work. This will be the simplest of builds and a good place to start. 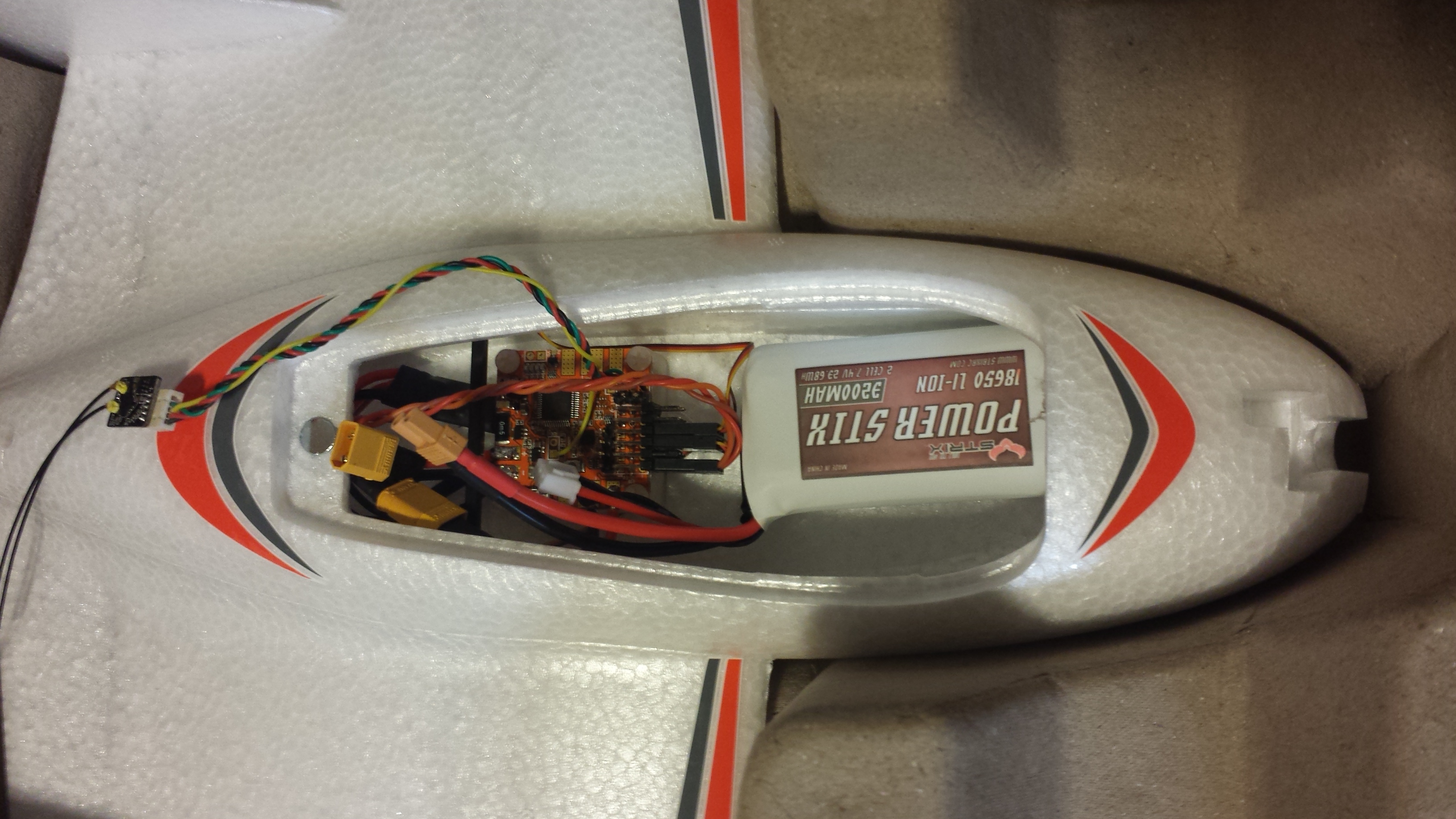 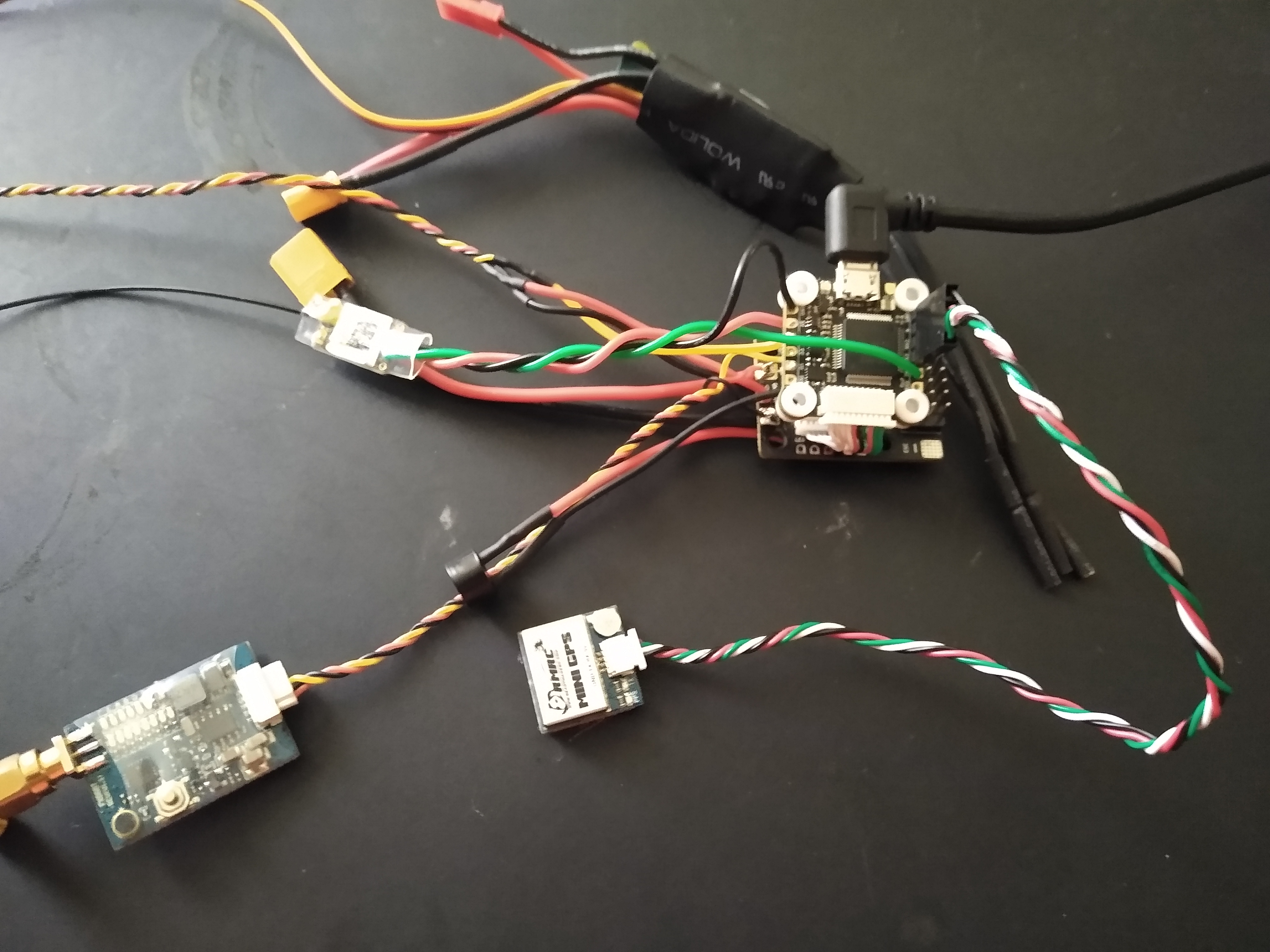 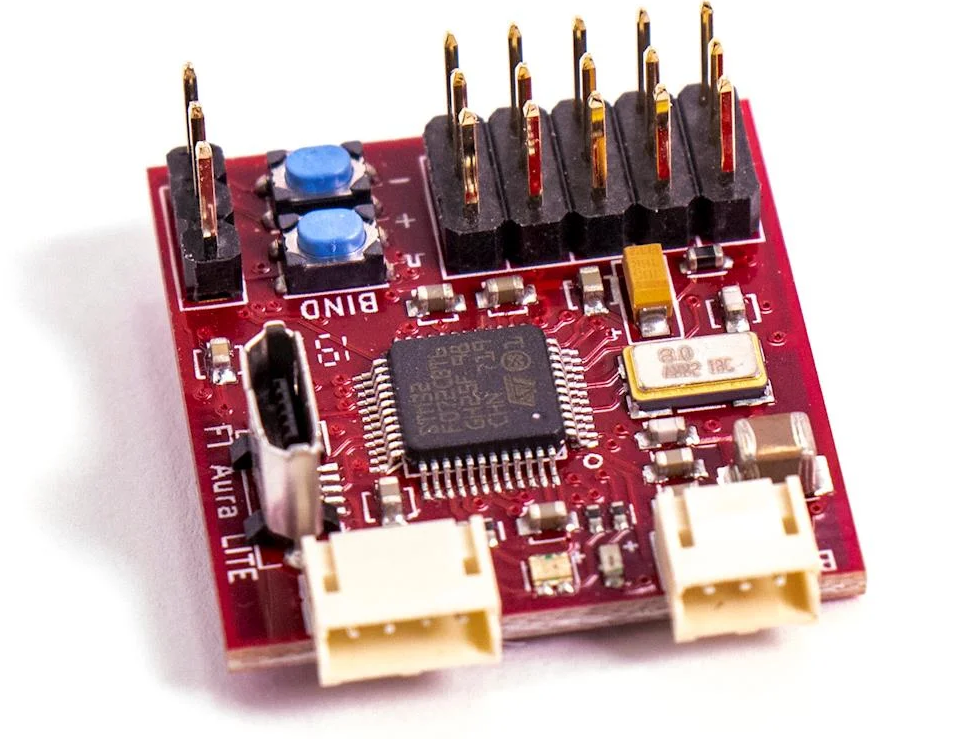 #2
Projects currently going on with all this good stuff and the gear being used:

#5
Its BEAUTIFUL outside... Quit yakkin and fly!!!! Save the building for evenings and rainy days!!

Hehehe will keep an eye out for your next episode of evil genius goes flying.

Mentor
#6
Yep - want to see how this turns out. I'm liking the idea of iNav on a wing myself.

#7
I can’t wait to ask you all my iNav troubleshooting questions!!!! Good luck with the build.

#8
Looks like we all have good timing, Painless360 has been posting a lot on iNav lately too

#10
Before I get too far into any builds, I did a quick sanity check of the hardware mapping of the the Matek F405-Wing to the Revolution target that it would use for dRonin. The F405-Wing is NOT currently compatible with dronin at this time. The firmware will boot, but the pin mappings are completely wrong. So it will be iNAV only for now. I'm going to take a stab with the help of the other devs at making a viable dRonin target. There is no DTFc target in iNav, so it will be dRonin only. I guess that will make it easier for me to tell which firmware is on which plank for the time being!

#11
allRIGHTYthen.... Been out to the field the last two nights with near perfect weather. Very little wind, 75-85 degrees, dry, clear skies, and I took nothing but wings. Figured I should dust off my FPV wing flying skillz before getting much deeper in this thread. Took my RMRC/Strix "nano" birds (Skyhunters and goblin) and was only flying under full manual control with no Gyro stabilization at all. The NSHs have plain old Spektrum AR400 RXes and AIO 200mw Cam/Vtx. The N-Goblin, has a DTFc running dRonin doing the elevon mixing and passing telemetry (current/voltage) back to my Taranis X9D via the R-XSR RX. It also has an AIO Cam/Vtx. SkyHunters flew good, and are easy to launch. The Goblin, I had serious issues hand launching with my FPV goggles on. Turns out, At some point when configuring the servo endpoints and direction, the left servo settings didn't get saved.... So it ended up moving the wrong direction and in effect, swapping the roll and pitch control. D'OH! So instead of giving up elevator, It was giving roll, hence blasting itself into the ground on every attempt to launch.. DOH DOH DOH!... (would have found this had I done a proper pre-flight at the field) Didn't damage the Nano Goblin at all after repeated smacks into the ground, but managed to knock the lens clean off the AIO. Fixed the servo config at the field and did a brief LOS flight to validate, but I really really need FPV on planks to fly. Finished the night out and got > 60 minutes in the air on 5x1300mah 3S batteries with the SkyHunters. 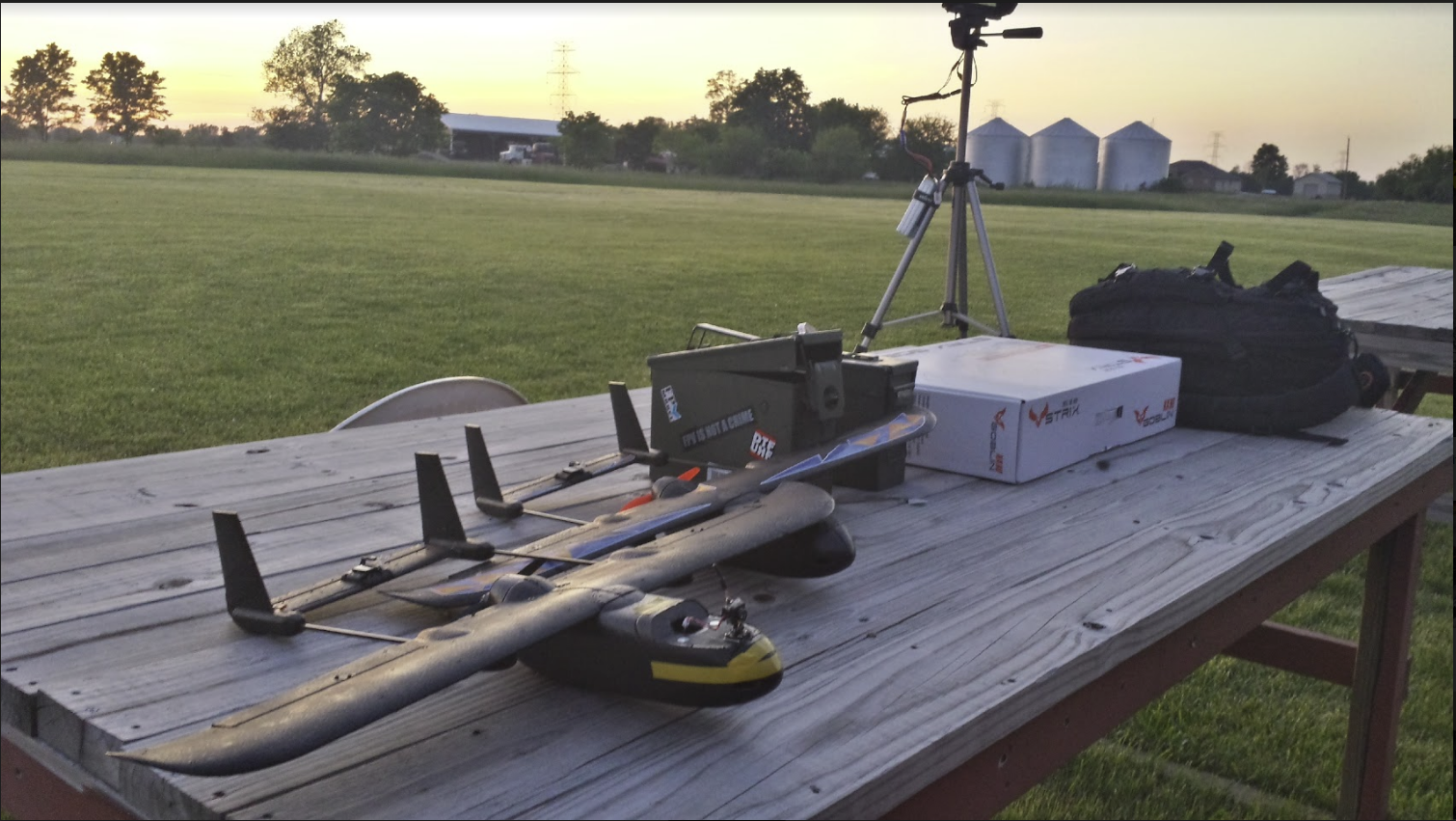 I tried to repair the new but busted AIO VTX/Cam, but it appears the camera was damaged beyond just the lens and holder getting knocked off. Ended up having to throw a different AIO at the Goblin which didn't quite fit without trimming a bit of foam on the front end. Went out last night and still was having issues launching the N-Goblin with FPV goggles on. Ended up launching LOS and pulling the goggles down once in the air. It just doesn't have the thrust to punch it and go like the SkyHunters do. Has to be a really good toss or it just ends up in the grass. Played around for a while getting the trims dialed in and feeling out the goblin. Tested gliding with no input and ran into a small snag. dRonin was configured to auto disarm after 30 seconds at 0 throttle. D'OH!!! Fortunately, that just means you loose throttle and not roll/pitch control. But when I got down low enough that I wanted to feed in throttle, it didn't respond and I had to do a controlled ditch in the high grass at the end of the field. Managed to get 40+ minutes on 3-4 flights of the goblin on a single charge. Now that the sticks are trimmed, I can also go back into the dRonin configurator and 0 the servos/sticks which is the next step before enabling gyro stabilization. Only got 2 packs in on the skyhunters since I got so much more time on the Goblin and didn't have to do much messing around doing the walk of shame and fixing things. Getting real good at landings with the plane stopping straight out from my seat. Nano Skyhunters and Goblins have very similar low speed landing characteristics. Oddly they have the same waggle in the air too. 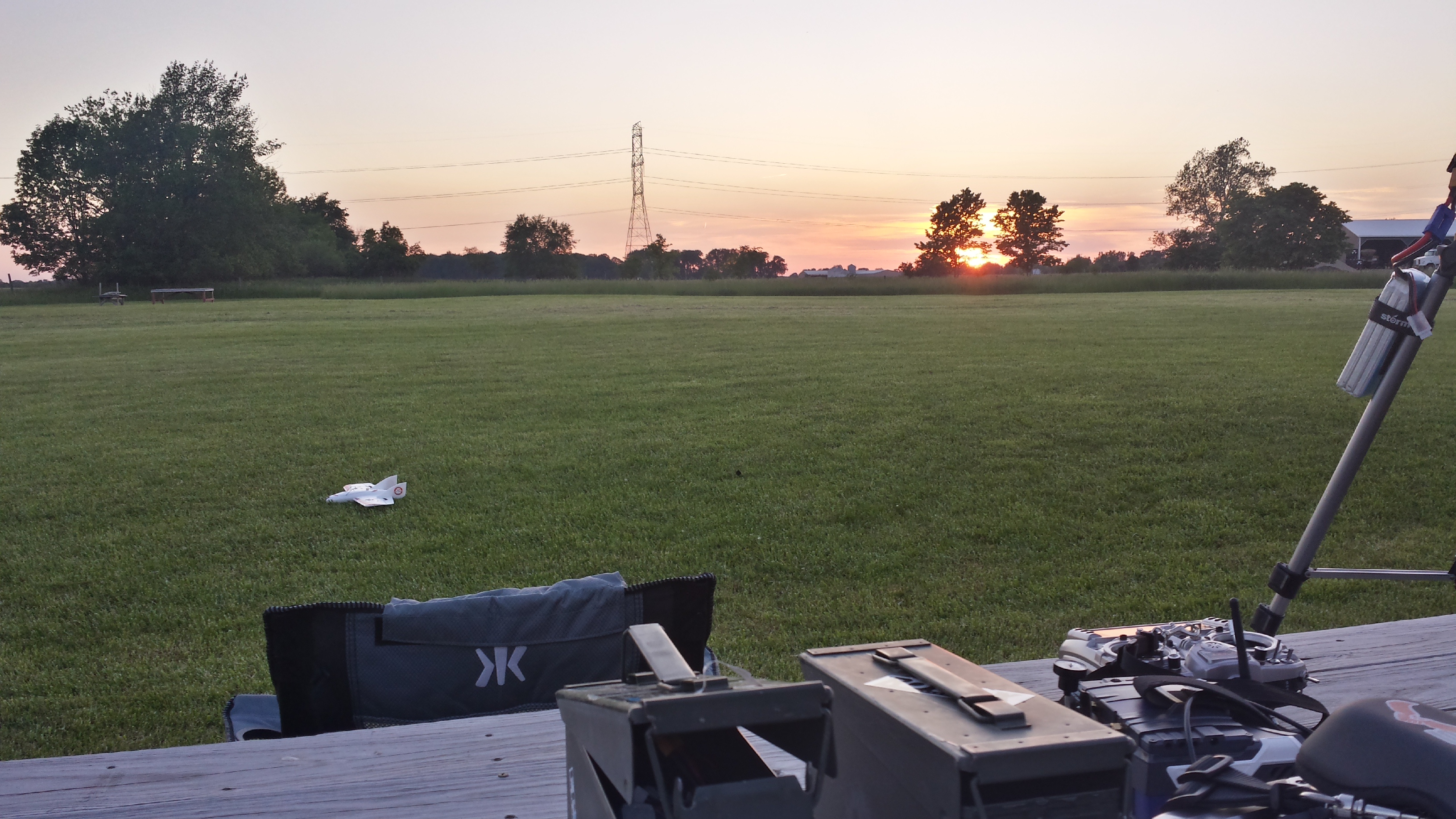 Next up: We'll start getting into the setup and config of dRonin on the Nano Goblin.

#13
So it appears that nano skyhunter is not meant to be flown at high Gs repeatedly, over, and over, and over, especially in hot weather. LOL
Got about 15 packs through them over the last 4-5 days and quite a few in the past too.

This wing is done.... Ripped the bolt down section clean out and it was nowhere to be found out at the field. Maybe it will turn up when I'm mowing next time.... 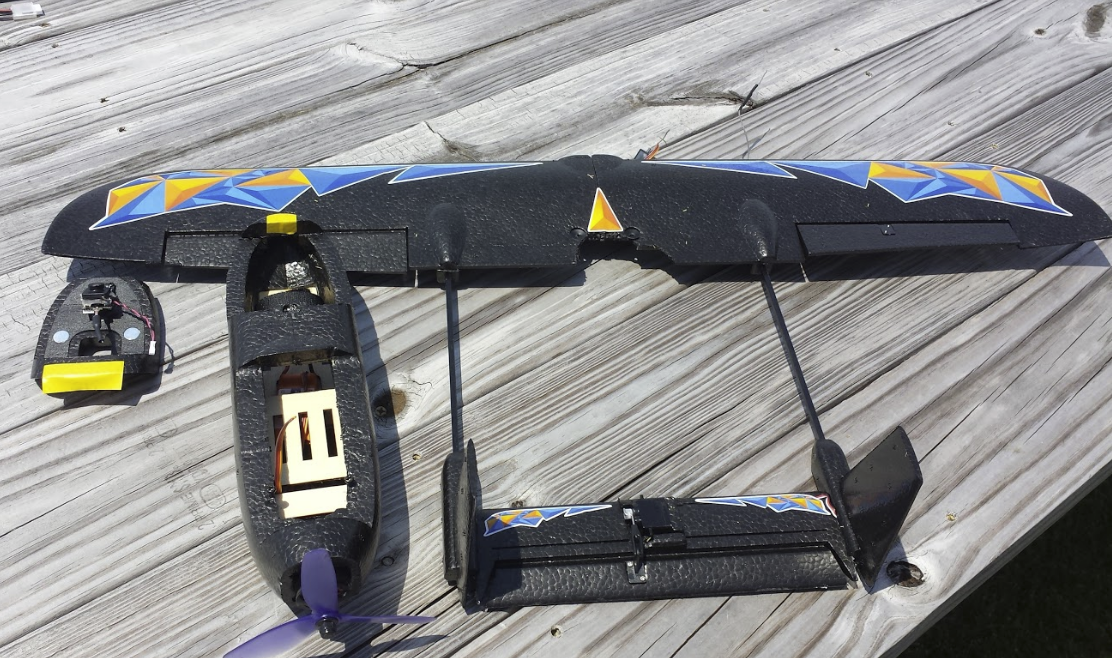 Going to meld parts from the two into one, turn the rates down, and put a really tame prop on it. Have to reglue the right wing spar which pulled out of the "good" wing, and patch a big crack in the elevator with foam safe CA.

Played around with the Nano Goblin some too, but it appears I messed up the config radically when upgrading to the latest beta firmware. Most likely didn't get the servo endpoints set correctly since the throws are about double what they should be. Was causing bad oscillations in Gyro Rate mode, and was almost uncontrollable in full manual pass through.

#14
Been busy soldering up the pinheaders on the F405-wing. It ships with red, white, and Black header pins for your own assembly which lets us decide direct solder or pin headers for ourselves. One thing to note about the layout of the UARTs is that the G and +5 are not consistent. two are G,5,T,R and three are 5,G,T,R. so if you switch devices between uarts, make sure to double check correct polarity.

Have one Nano Skyhunter patched back together for more full manual flying.

Updated to latest dRonin firmware on the Nano Goblin, reconfigured rates and P/I for pitch and roll. Will check throws again before heading to the field. Waiting on dry, low wind weather again.

#15
Sounds like you have what we have now weather wise. We went from mid 90's (Already) for like three days then down to low 60's over night and rain and wind the last two days. Ground had got so dry and hard I could not even get my flags in the ground the third day of that heat wave.

I am gearin up to get repairs on TAZ done so I can go back to getting him set up on 5s for FFO. I been flying the Alien on 4 and 5s with the same settings and not much change between the two tune and only slight differences. This makes me wonder why I am struggling so much going from 4s to 5s on TAZ. I am wondering if that bad (now broken) XT60 factory solder joint that was not even tinned was causing a power feed issue. Anyways looks like I am in the same boat hitting my toys too hard on not so perfect set ups.

#16
SWEET! Found my missing Surfer1500 pushrods and rod ends! Can throw the F405-Wing in there now and have it ready by the time the weather improves. 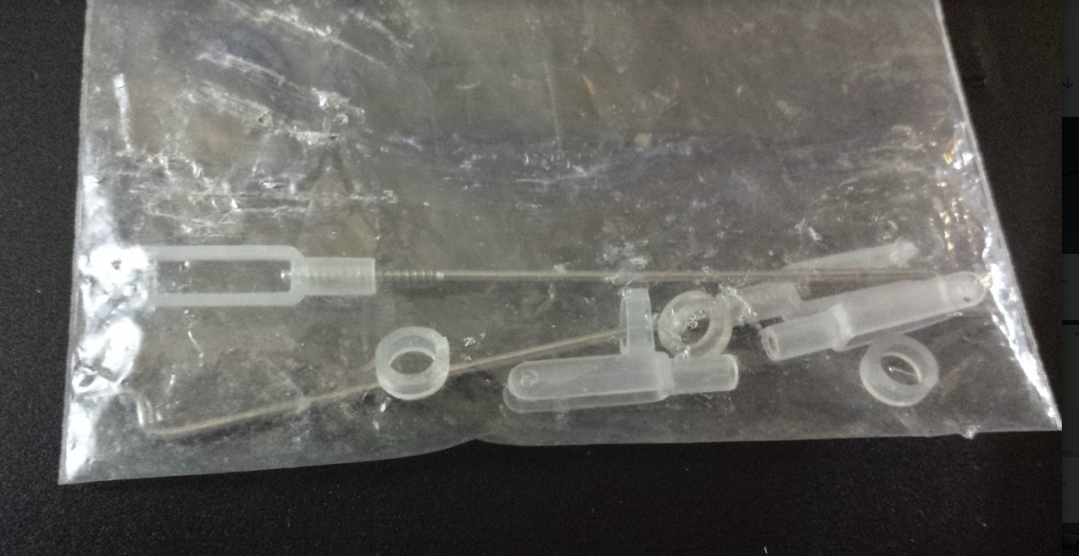 #17
Guess i should return back to this thread a little bit. Only got one FPV flight at Flite Fest, and it was with my Nano Skyhunter. Upon landing that pack, the horizontal stabilizer must have been really loose cuz when I launched it on the next pack, it broke off and went right into the beans. Finding myself once again trying to combine parts from whats left of the two NSHs. Probably time to just order a bare kit rather than perpetuating the use of over-stressed parts. That's kind of a side note though, because it's not FC enabled.

I picked up a Strix StratoSurfer PNP from @BridgeInspector at Flite Fest. Currently running a FrSky R9 in it, but am thinking it would be a good target for an R9 Mini and one of my DTFc FCs. Kinda ticked that FrSky does not have an un-inverted option on the R9Mini. Really limits functionality with F4 FCs like the Matek F405-Wing. Kinda ticked at Matek too though for not supporting a second inverted port for telemetry.... Hmmm... Ah well.

Rained all day today, and not looking any better for the weekend. Maybe I'll catch up on some of the stuff I thought there would be time for at Flite Fest, but never got around to.

Mentor
#18
Have you looked into F.Port? SBUS and telemetry on one UART. Requires a firmware update on the Rx, but should make your life easier.

#19
I'll have to see if iNav has fport support too. Thanks for the tip!

#20
Well... Been out of the loop for a while, and there is a new player for firmware on the F405-Wing and several other F4/F7 flight controllers. Good old APM/ArduPilot "IS BACK" and now runs on standard quad type FCs.

http://ardupilot.org/plane/docs/common-loading-firmware-onto-chibios-only-boards.html
And y'all thought APM was a thing of the past....