#1
I've been busy trying to do something in honor of my son Colin for Autism Awareness Month. He's days away from being 6 and is not quite ready for RC, but as apart of his Autism he LOVES fans and, as you might guess,...propellers! I can remember several years ago, as he came home from pre-school, how he would just sit in his chair and spin his propeller on his toy plane daily just to relax. It was a sign that not everything was right, but I can't argue with his love for them. I like to make them spin too! I think about him a lot when I fly and build.

Here's a pic of my boys Colin(6) and Caleb(8). You might not believe me if I told you we were huge Star Wars Fans. That's Darth Mau...errr...I mean Colin there beside me.

I've been flying for right at a year, and the FT Bushwacker is the closest thing to 3D I've spent any real time on. However, when I began to think of what I wanted to do, 3D just really stuck in my mind. As a parent of a child with autism, I can tell you that I feel like a 3D dad. Advance maneuvers are required in our family and crashes are inevitable, but we rise up on wings like eagles and renew our strength. I have much much more I could say about autism, but lets get to the teaser for Colin's plane. 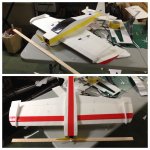 So, you see some elements that you all are very familiar with from FT and other designs. I've tried lots of different things such as wings and fuselages. I've settled on this one, and I love the results so far in the air. The pilot has a lot to learn though in order to properly evaluate it. I'm going to get some film put together as quickly as possible to share with you all. Plans are also in the works as a thanks to this tremendous community that I've grown to appreciate so much.

For more on Autism visit: https://www.autismspeaks.org/

5/9/2016: Adding a flight video. Getting good footage with an actioncam is harder than I thought it was going to be.

#2
Looks like a great plane. And thankyou for sharing your story

I'm looking forward to hearing the rest of this story. God Bless.
E

#4
The wind is not cooperating at all. Tomorrow shows promise according to the NWS. I have flown it many times in 10+ mph winds with great success. I am beginning to think the rudder needs to be a bit bigger on the next version to pull off a straight down the runway knife edge. Mostly I need to learn what I'm doing.
E

#5
Adding a flight video today to the original post and here. I have a couple more I'll post soon including a flight on the C-pack, and flying in a small space like a football field. The plane continues to evolve. More coming soon.

I'm certainly very appreciative of FT videos after discovering how hard it is to get good RC footage. It's particularly hard with an actioncam's wide angle lense and a rookie 3D pilot.

#6
Lets think about moving that wing

All you designers and tinkerers out there, give me your thoughts on lowering the wing in the fuselage in order to have the entire wing run through the middle of the plane. Why?...well not much 3D is not going to happen on the C-pack motor or maybe you want to go really fast. It might be cool to just give the option.

Some simple design shenanigans are used to keep the wing from folding and to maintain a swappable powerpod in it's current location. Maybe it wouldn't negatively impact the plane that much to run a low wing, but presently the thing tracks control free inverted. I have a feeling that things will change, and the rear stabilizer might need to be moved. Maybe Dihedral will be needed to control coupling. I've learned you really have to consider these things on the drawing board. It saves foam

I can simply manage an optional plan if it works well, but before I even think about starting the build on it I would like some feedback.

Check out the plan below. Don't worry about the battery location. That thing is happily tucked away elsewhere. 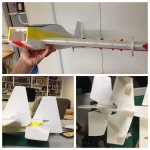 This plane is a blast to fly. I took a co-worker out and was teaching him to fly on it with low-rates. It handled really well for him to learn. However, it's yet to earn "3D" in my inexperienced opinion even though it can be banged around like crazy. So, here's what I'm working on.

I was avoiding vortex generators, but I needed more aileron authority in a hover. At some point, every failed hover occurs as it torque rolls out of what I can counter with my ailerons. So, I've added some FT-3D style VGs. Too many? I'll try it and snatch some out and try again to find out. I want to park this thing in the air eventually.

Also, I previously added a larger rudder, and then changed up the stabilizer. The larger rudder is a big help and makes for some fun in the air.

Waterfalls are not too snappy. Overheard in the FT-3D video that they reduced the size of the rear stabilizer to improve this. I should try that next.

Another issue is holding a knife edge. I can get it locked in, but it will want to snap roll toward the gear side. For example, when traveling from right to left with the canopy toward me in a knife edge, I really have to fight the coupling roll to the gear side of the plane. This is really weird as there is little to no coupling when using the rudder in level flight. I've toyed with mixing and it helps, but I would really like to reduce that. Any ideas? Perhaps changing the size of the counterbalance on the rudder?
Last edited: May 20, 2016
E

#8
About those Vortex Generators...

These things really work! I can now counter torque roll in a hover nicely. Getting close to releasing the plans. I want to build another from scratch to make sure all my little changes in CAD over the last few months are fine.

A couple of things I would like to improve would be flat spins and reducing some of the coupling in a knife edge.

Site Moderator
#9
In a day when people are way too often doing things to please themselves, often at the expense of others, often their own children, you sir are manning up. Thank you. After my time in the Navy I was called to get involved in the lives of children and so for the past 8 years I've been working in the local public K-5 school, 7 of them in the Atism program. While it has been a blessing and a privilege, it is also a special challenge, one that educators primarily experience at work. You sir, are an encouragement to fathers who need to step up to fatherhood and be what their children desperately need.

I have a Blade Inductrix which has 4 whizzing fans that propel it around. It's fun. It's safe. It's resilient. It's inexpensive. With rates dialed down for a beginner it's rather easy to fly. And I have had a couple of my students fly it with much delight. Oh, and it's not very loud at all.

Just a thought I thought you might want to consider.

Thanks again for doing you part of being part of the solution in a troubled world. May God bless you and your family.
&#8212;Jim
E

JimCR120 said:
After my time in the Navy I was called to get involved in the lives of children and so for the past 8 years I've been working in the local public K-5 school, 7 of them in the Autism program. While it has been a blessing and a privilege, it is also a special challenge, one that educators primarily experience at work.
&#8212;Jim
Click to expand...
Jim! Thanks for the kind words and encouragement. I sincerely thank you for your work with children. I can tell you that we appreciate our teachers and aids at our elementary school deeply. Keep up the good work, because I don't know what we would do without them. Our aids and special educators are family to us. I'll look into the inductrix. It looks perfect! God bless brother.
Last edited: Jun 14, 2016
E

I've been flying the new model all summer mostly at night. Yes! It's full of LED's. I've left off the SFG's for now. There's a bit more wing rock without them in a harrier, but knife edges are much easier. I need to strike a balance. Anyway, this is just an update on a project that is still ongoing. I've just been way too busy to edit together the build video. It's all shot, but kids! 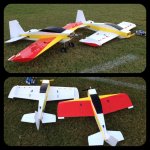