One more Lidl stroll around the block

#81
Javiester said:
a doubt
I know one motor has to be cw and the other ccw
But which one on each side of the wing?
In what sense do the propellers have to turn on each wing?
Click to expand...
It doesn't matter!

#82
Only time I've found it makes a difference is on smaller models that use differential thrust and larger props where the torque is likely to cause some roll when turning...

#83
Thank you
I do not want to use the differential thrust
I want to go step by step in my learning
also this first I will do it in 3CH
next year we'll see ...

#84
Javiester said:
Thank you
I do not want to use the differential thrust
I want to go step by step in my learning
also this first I will do it in 3CH
next year we'll see ...
Click to expand...
I meant it makes no difference which way the props turn, just as long as they are opposite to cancel any torque.

#85
It does make a difference, not for torque roll but where and how the air is pushed around the wing. As a rule the top of the props spin towards each other, left CW and right CCW

#86
Now we're getting deep into this dissertation!

I don't know what most people do with twin engine models do but for several of mine I have run CW/CCW and CW/CW and had little to no discernible change in flight characteristics under basic flying conditions... Others of mine, like I said, seem to be a bit more sensitive. (and those tend to be ones that rely on differential thrust to turn) I agree with @Wildthing that most twins with counter props run the CCW on the right wing but I have some little scratch builds that I had to switch from that rule to encourage some "rolling" in the turns: 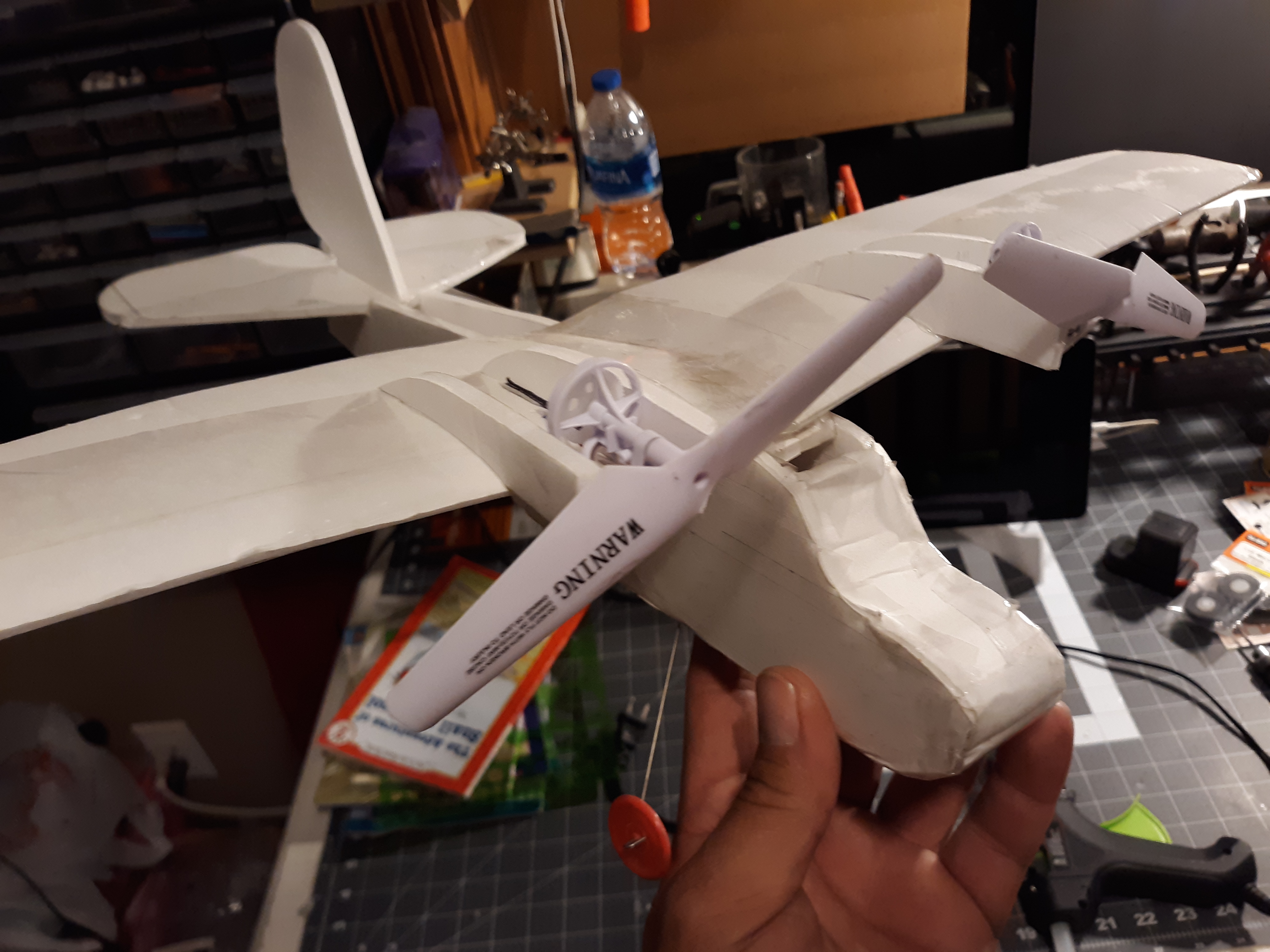 I know that "Full Scale" aviation is about 50/50 for CW/CCW twin engine planes for a lot of reasons. A lot of WWII planes run all the engines the same way so the spare parts are always universal which is a thought to keep in mine when at the field. If you have all CW engines no need to worry about double sets of props! A lot of smaller twin engine "full scale" planes run with motors that spin the same way for the same reasons, Cost and Simplicity. Some planes, like the Comanche, had options for a CCW engine on the right wing but they were less common than the CW/CW birds.

Here's a CW/CCW Comanche with props arranged as @Wildthing noted and one with CW/CW:

It probably doesn't matter what way you run them! Odds are it will not be a significant difference for you one way or the other but my $0.02 would be in agreement with Wildthing on this one and say that the best possible arrangement is to have CW/CCW.

All that rambling and probably the only significantly useful piece I have to add is from a bit of experience I've picked up along the way. If you're using a threaded prop shaft motor, or prop shaft adapter, don't sweat running a CW motor CCW, just make sure your nut is good and tight... (or as we like to say in my German heavy neck of the woods... GuttenTite!) The only time you will lose a nut is when you have a prop strike at power and then the likely outcome is that the prop nut will loosen, your prop will come off, and nothing will be broken! So its a win win! lol


And to make sure this isn't a COMPLETE hijack of the Lidl thread we are on....

I got this in the mail today! 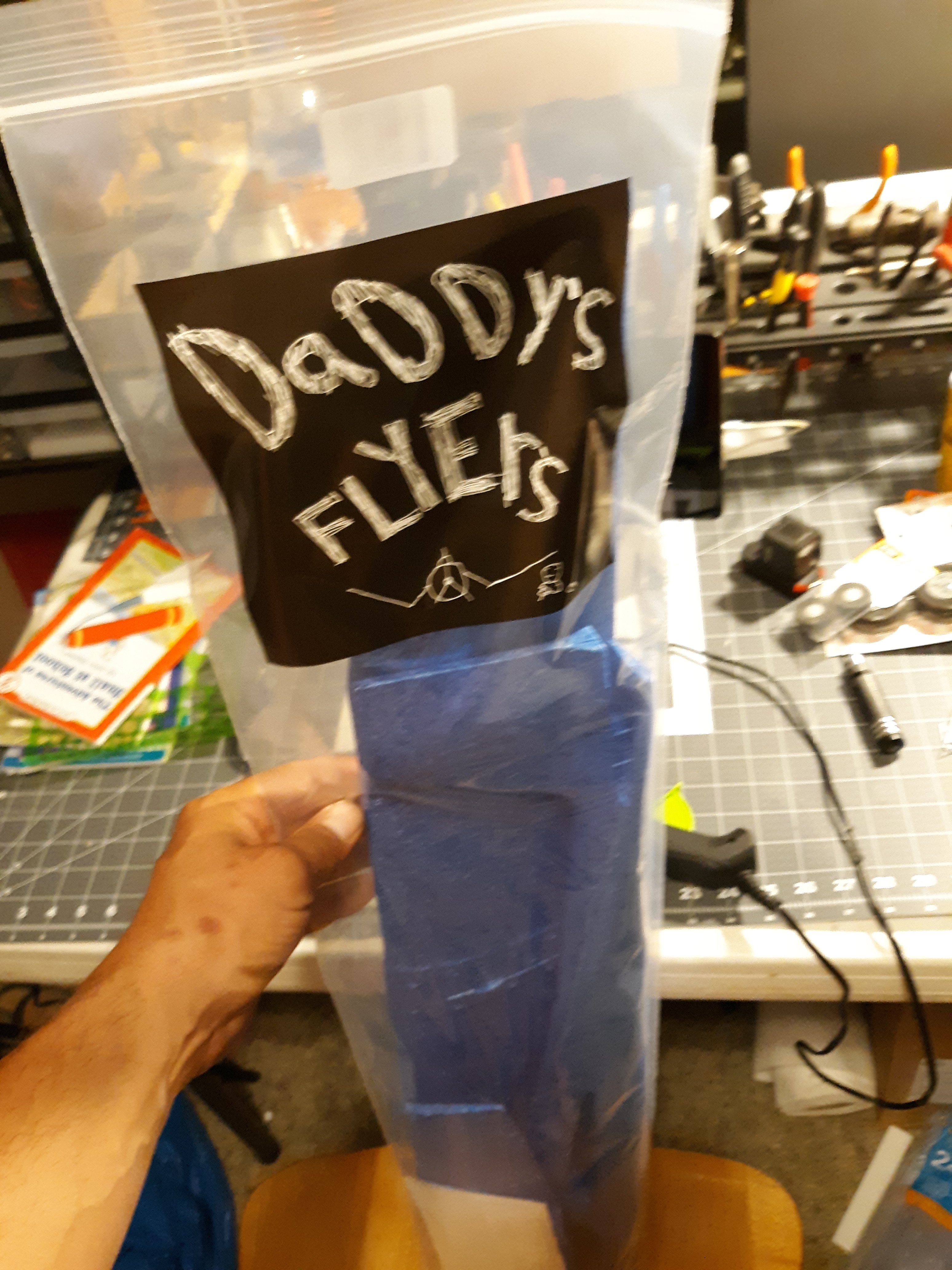 Its my Amazon "Lidl" knockoff!

Looks quite promising, might even say the foam is a bit more dense than the Banggood one I've been flying so thats a good sign!

#87
The main reason for CW and CCW twins comes down to power to weight at critical parts of the flight envelope, typically when taking off where the "P" factor makes an "outward over the top" rotating prop create more yaw than an inward rotating one. Add an engine failure and one engine will be more critical to maintain control than the other.
Model planes tend to have higher thrust to weight ratios than full size so torque elimination can be significant particularly when 'low & slow'! 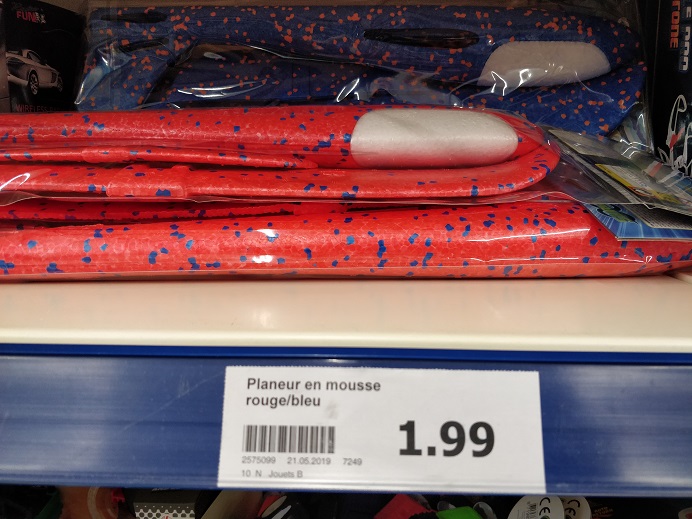 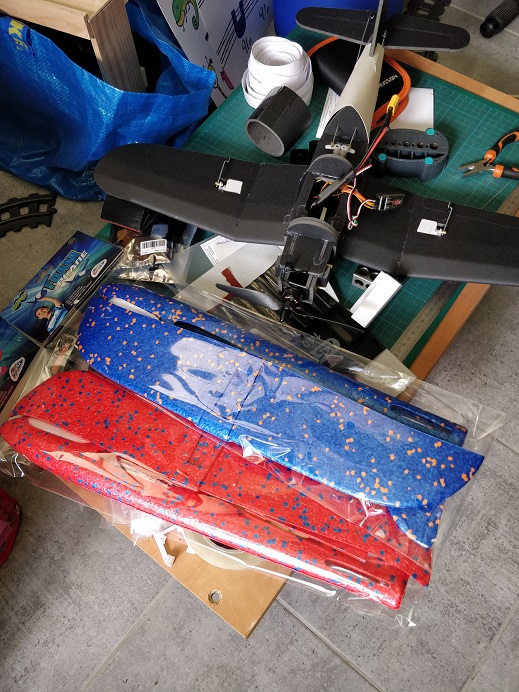 Well, the -> part is even not in progress, but holidays start this evening. 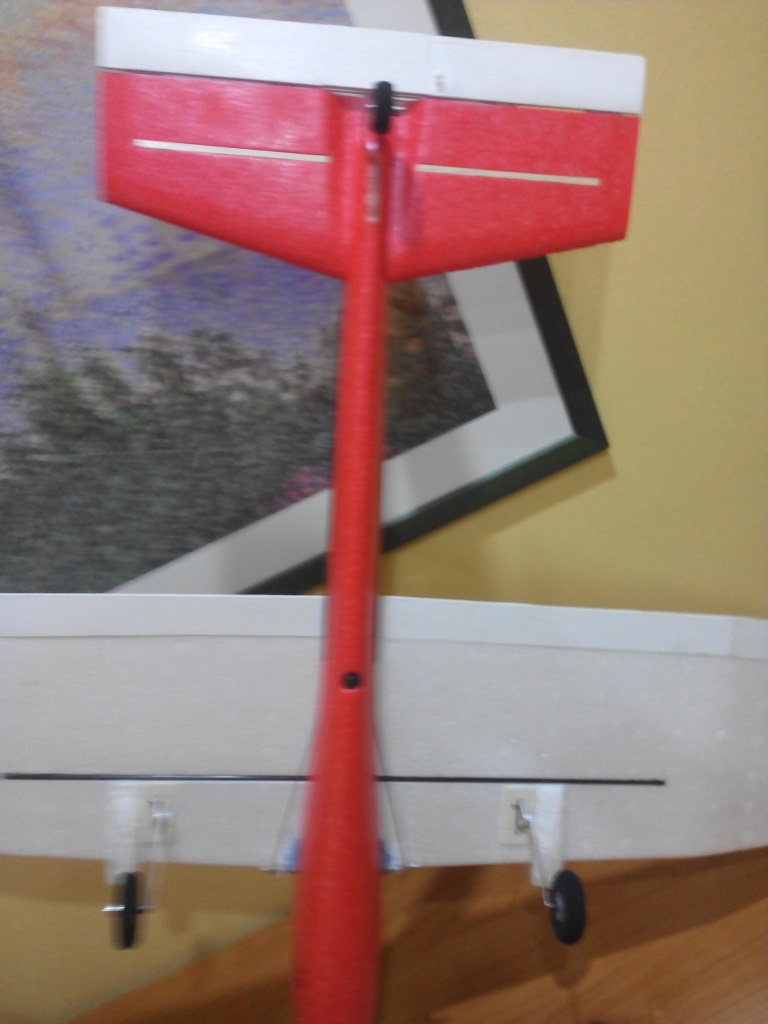 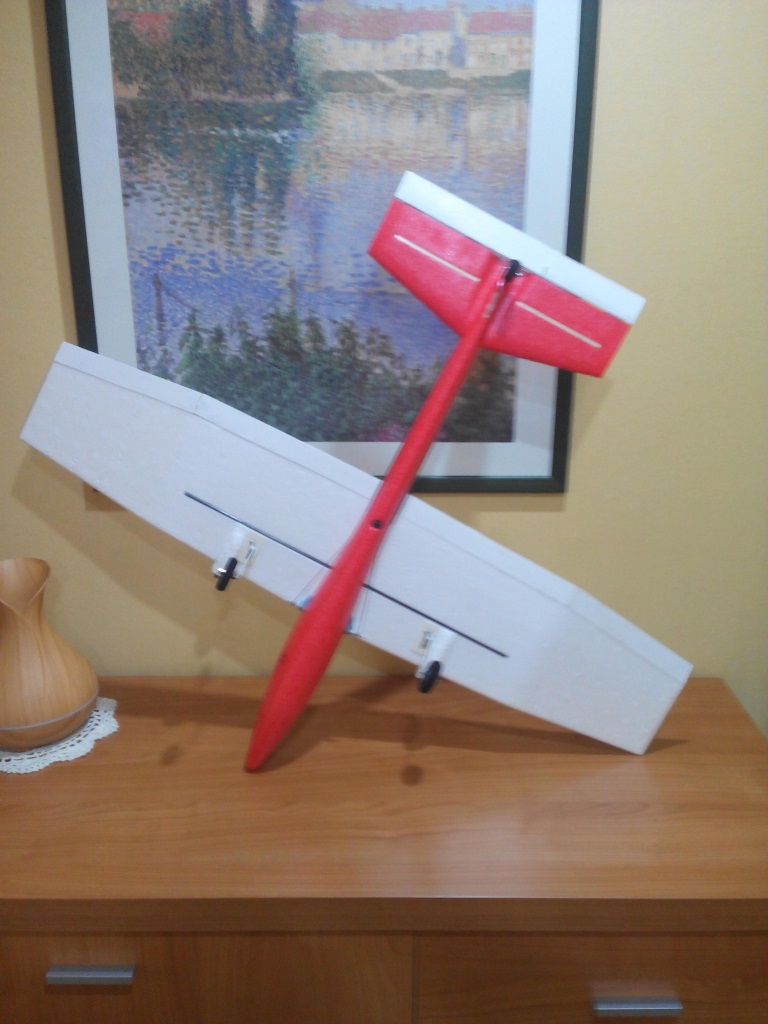 #90
Javiester said:
installed wheels and wing extensions
in the future I will install the fourth channel 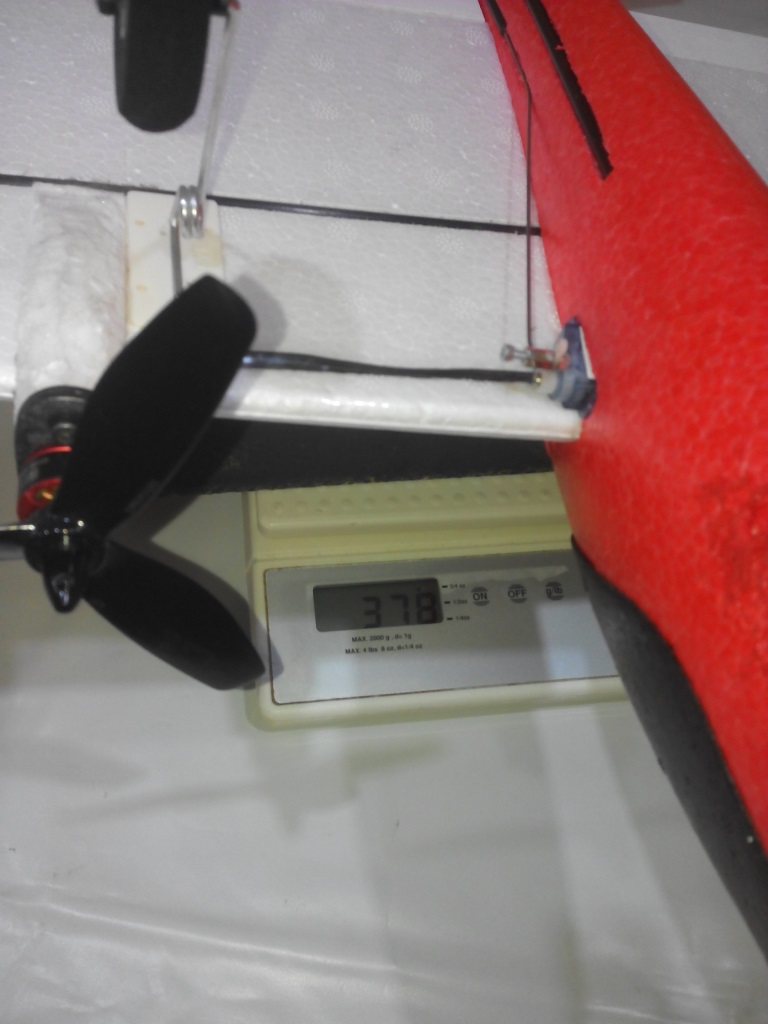 #92
quorneng said:
Bonzodog
Neat.
What does it weigh?
Click to expand...
I made a few changes since the video, bigger motor = more nose weight so battery moved to the centre of the fusi between the main spar to get CoG right.
Made another test flight and she flew well but I had glitching from the rx. Hopefully sorted that now.

#93
Bonzodog said:
I made a few changes since the video, bigger motor = more nose weight so battery moved to the centre of the fusi between the main spar to get CoG right.
Made another test flight and she flew well but I had glitching from the rx. Hopefully sorted that now.

#95
quorneng said:
Nice but 475 g is pretty heavy.
More of a power plane than a 'glider'?
Click to expand...
Ya'll have me wondering if my banggood knockoff lidl is quite a bit lighter than the real ones... with twin engines, 1000mAh 3 cell, and a small fpv camera I'm right at 250g. No carbon but a healthy amount of packing tape in strategic locations...

#96
The Banggood one is lighter but also quite a bit smaller - 48 cm span against 86 cm for the Lidl!

#97
quorneng said:
The Banggood one is lighter but also quite a bit smaller - 48 cm span against 86 cm for the Lidl!
Click to expand...
I've got all kinds of those 48cm ones, my kiddos love em! I've got a BG one and an Amazon "lidl" and they are right at 34"

#100
The CofG certainly did on mine with its trailing edge extensions. 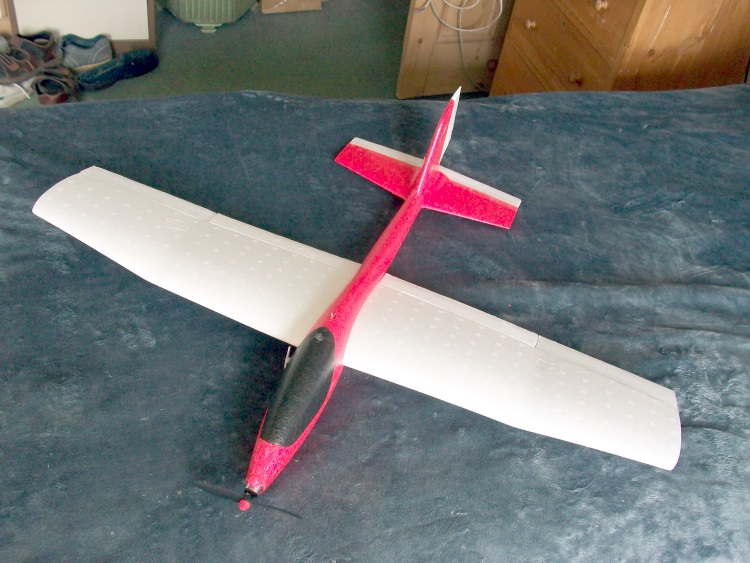 but then with everything else that was changed the new 'ideal' CoG had to be found by trial and error. The battery compartment ended up with the foam having to be 'excavated' about 15 mm further back under the wing than I originally expected.
You must log in or register to reply here.
Share: Facebook Twitter Google+ Reddit Pinterest Tumblr WhatsApp Email Link
Menu
Log in
Register