#1
I may be getting super ambitious here, but I would really like to build a foamie P-2V Neptune plane. They were a staple in the sky through last year because Neptune Aviation is based out of Missoula, where I live. The real plane is the slowest flying plane I've ever seen, when they were out doing test flights, they just crawled along.
I did find some old balsa control line plans for the plane, I am going to see what I can do to use those as a reference to design a foam version. I'm having a tough time deciding on scale though. The wingspan is 100', I would like to do 12th scale but that is a massive plane. I think I will end up going about the size of the Guinea pig.

Alright Guys, I ended up scaling the plane to match the prop size to a 10" prop. See final specs below. I attached V1.0 of my P-2V Plans here. It flies very well on a twin C-Power pack. 50% throttle runs nice and level, it even has a nice glide slope.

The plans currently don't have a bottom center section of the fuselage below the wing. I will update them once I come up with a plan for a set of bomb bay doors. I had concerns about getting the CG far enough forward and I planned on putting the batteries in front of the wing, but it turns out, the weight of the motors was enough to achieve the correct CG. I had to install the batteries at the back of the nacelles closer to the CG to not be too nose heavy.

#3
Oooh that's would be cool to build some old VP birds! Hell, I would love to see a P-3c!

#4
I'm off to a slow start, I really have no idea what I'm doing. Here's where I'm at so far.
I haven't quite figured out how the tapered outer wing profile is going to work. 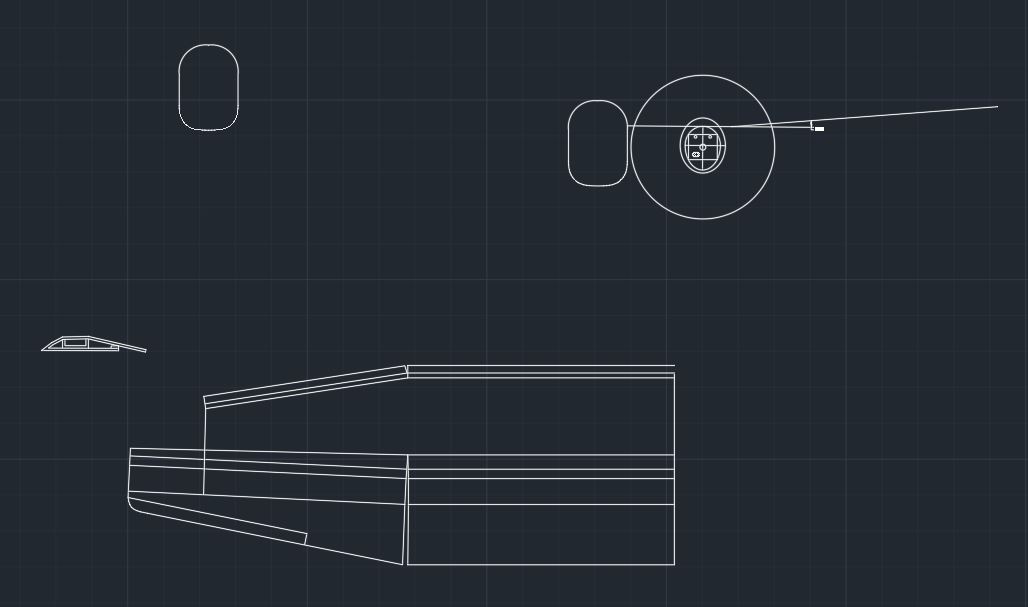 A few more hours of work... 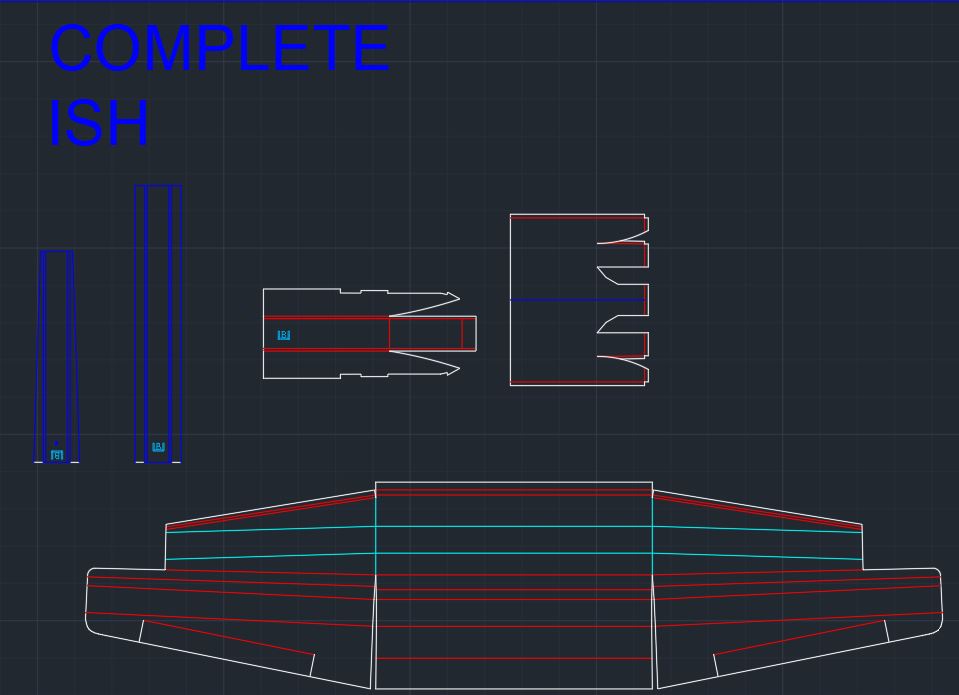 #5
Looking better today. I think the wings are mostly done. I have not figured out the wing/fuse connection yet.

#6
So far so good. I forgot to make a pitch gauge for the wing camber so I’m as far as I can get for the night. 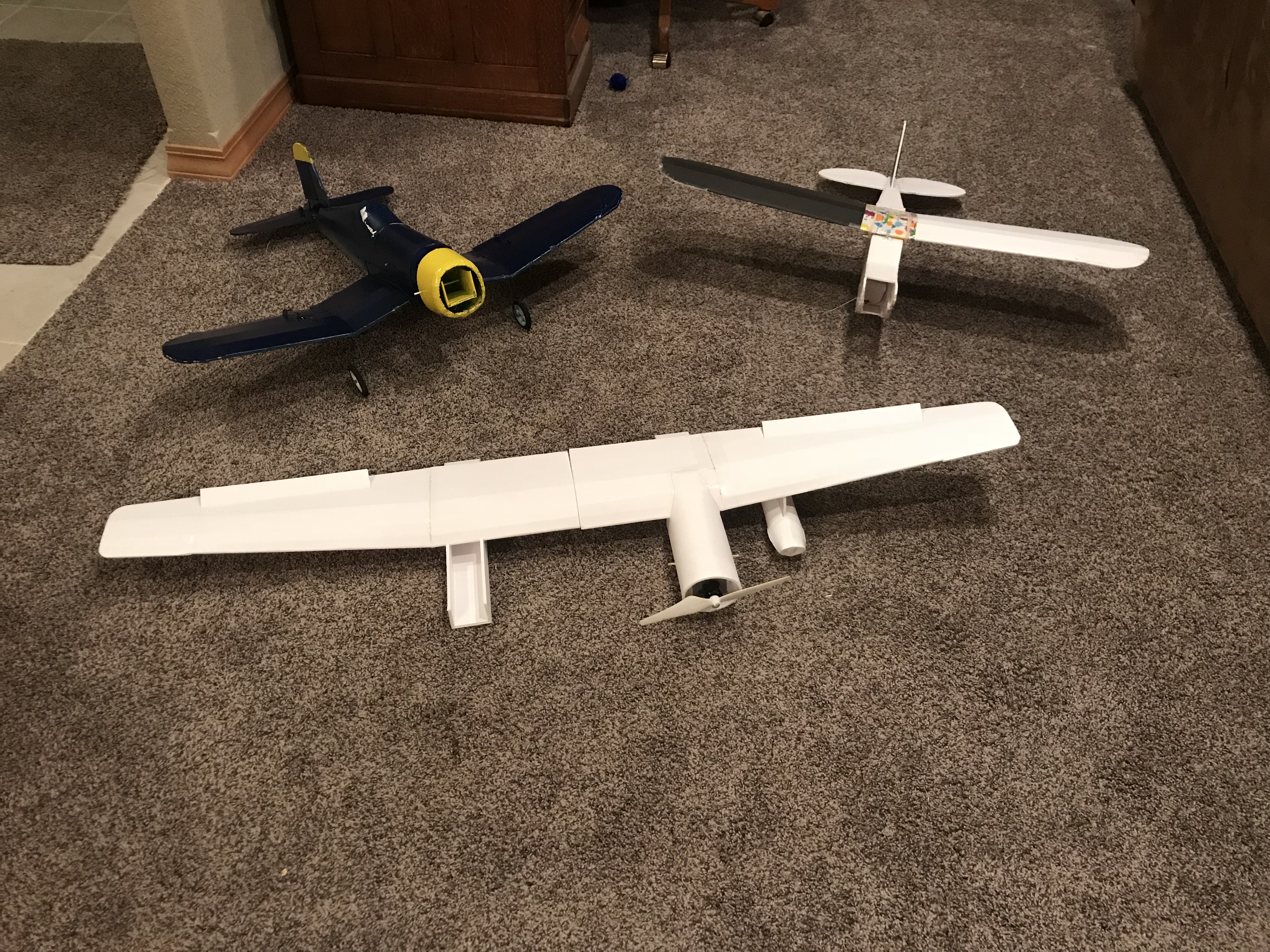 #8
I’m not super happy with the side pod, I think it’s a turbine. Overall, I think it’s looking ok.
Click to expand...
I would try mounting the power pods sideways, that way you could form the nacelles to be a vertical oval like the real thing.

#9
ThreePistons said:
I would try mounting the power pods sideways, that way you could form the nacelles to be a vertical oval like the real thing.
Click to expand...
They should be big enough to give them that vertical shape, I will make some arced pieces and try to fit them in there. I'll install them on the second wing before I put the cowling on.

I need to take a trip out to the Missoula Airport, I cant find many good pictures of this plane, they just put one in front of our airport last year when they retired them from firefighting service.

#10
I have to make sure to get that curve out of the frame as I work my way back. I should have made sure to get the curves opposite directions. Im not sure why my foam board is so curved.

#11
Any tips on how big to make the ailerons? They are looking slightly undersized to me in my last post. I can extend them all the way to the wing tips, the wing crease intersects the aileron crease at the wing tip.

#12
Tjhochha said:
Any tips on how big to make the ailerons? They are looking slightly undersized to me in my last post. I can extend them all the way to the wing tips, the wing crease intersects the aileron crease at the wing tip.
Click to expand...
I would do that, it's always better to be able to tame down the controls than to be needing more out of them.

#13
Today’s progress. This would be a whole lot easier with a laser cutter...

#14
Well, Here's the pretty much complete plans. I have also posted the PDF on my first post here. They could probably use a bit more work we'll see how it goes for finishing the build. 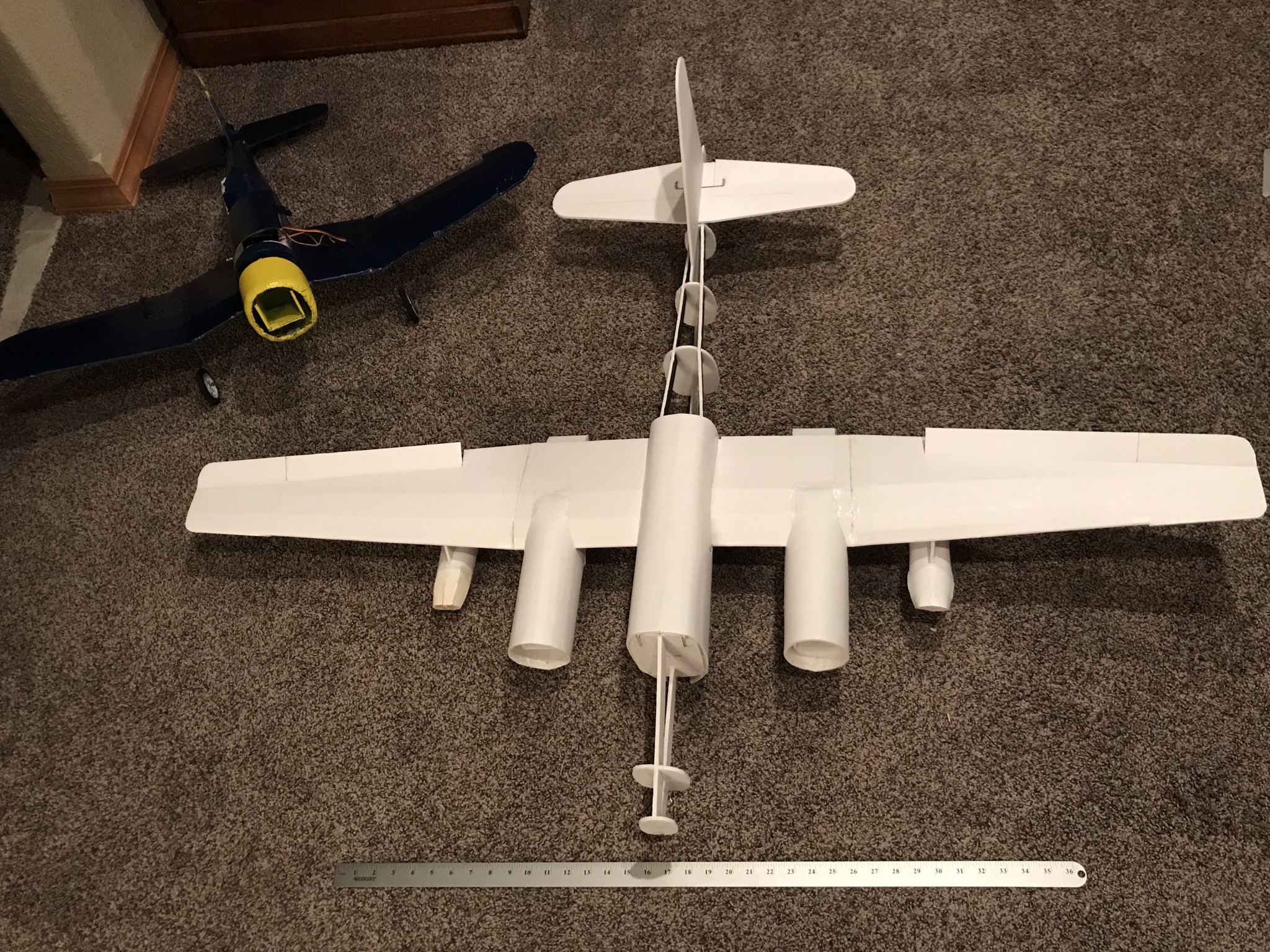 #16
Now I just watched the Viggen review and now I want to redesign all of the curved parts. I’m really not happy with how the curves turned out. I think the blocky old school graphics look would be much nicer looking and easier to construct. And probably lighter.

#17
Well, the build is pretty much done. I think I am going to redesign the fuselage, It feels super heavy.
It weighs 1.2 lb as is with no electronics or servos. Then I have to figure out how I'm going to power it, I'm leaning towards twin C-pack. 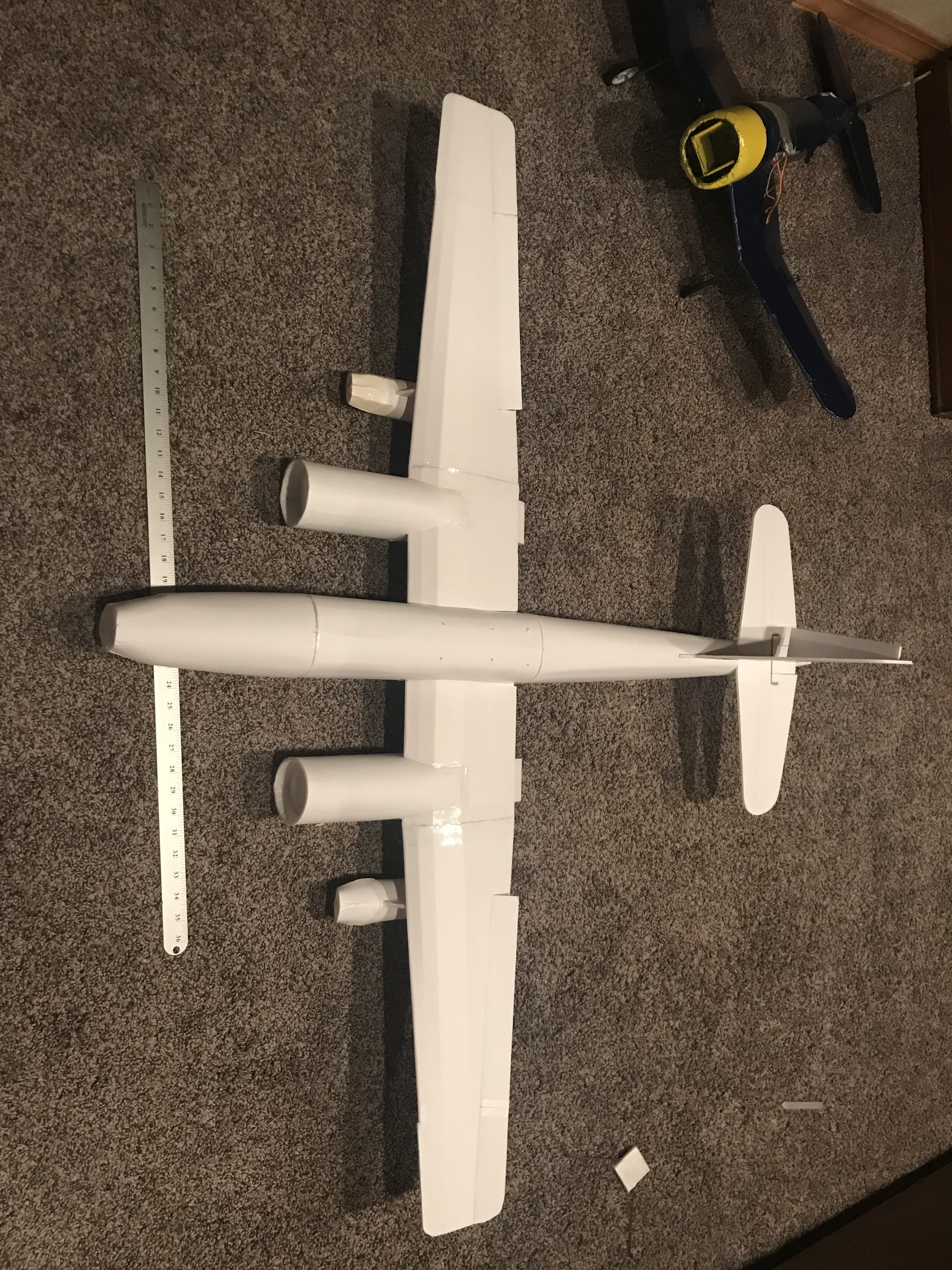 #18
I have a power setup question for you guys. My build is pretty much complete except for electronics and power. I don't have a scale but I do have a balance.I have an FT Simple cub and a 150% FT Corsair. They both fly great on the B-Power pack and on the balance, they both weigh slightly more than my P2V, does this mean I should be able to buy a twin B-Power pack and it should fly fine or does the power not scale on a plane?
Actually, I would probably buy some 20A esc's because I have 4 motors off of a Phantom 3. Correct me if I'm wrong but it looks like the phantom 3 motor is basically the same as the B-Pack motor. It turns out phantoms turn into a very expensive rock when they turn off 200' above ground.

#19
Well, I think I'm done with the octagon fuse design.

Reiterating my previous question, if this plane weighs less than two planes that fly well with a B power pack and each wing of this plane is a similar size to the total wing span of each of the other two planes, will a twin B power pack be enough power for it? Or should I step it up to a twin C pack? I would like to be able to carry some payload within the future bomb/slurry bay.

#20
I would think that would depend on wing loading and over all drag if the weights are similar.

My guess would be try n see with what ya got if its in a reasonably close range for other setups.

Btw once you have this in the air move on to a p3 c update as several of us here were crew in some form or other.